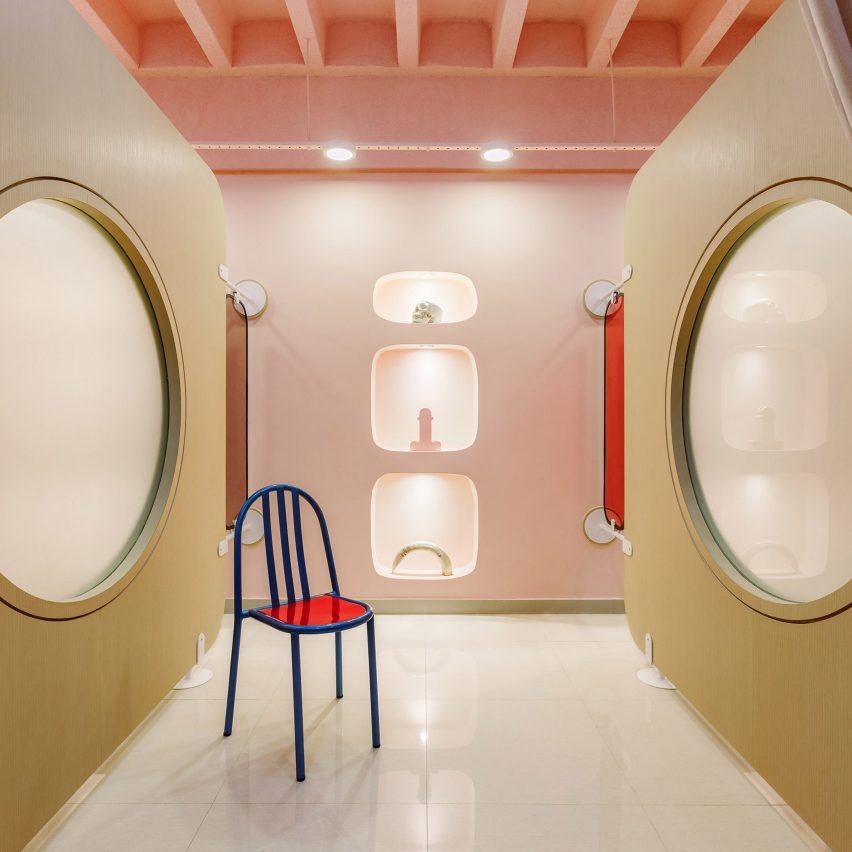 Formica panels with circular oculi form the walls of the suites in 2020: A Spa Odyssey, a day spa in Venezuela that Atelier Caracas has based on the sets of a Stanley Kubrick film.

Modelled after the film 2001: A Space Odyssey, the spa is located on a busy street in Caracas, Venezuela. The clients enlisted local studio Atelier Caracas to design an “out of this world” spa secluded from the bustling city environment. 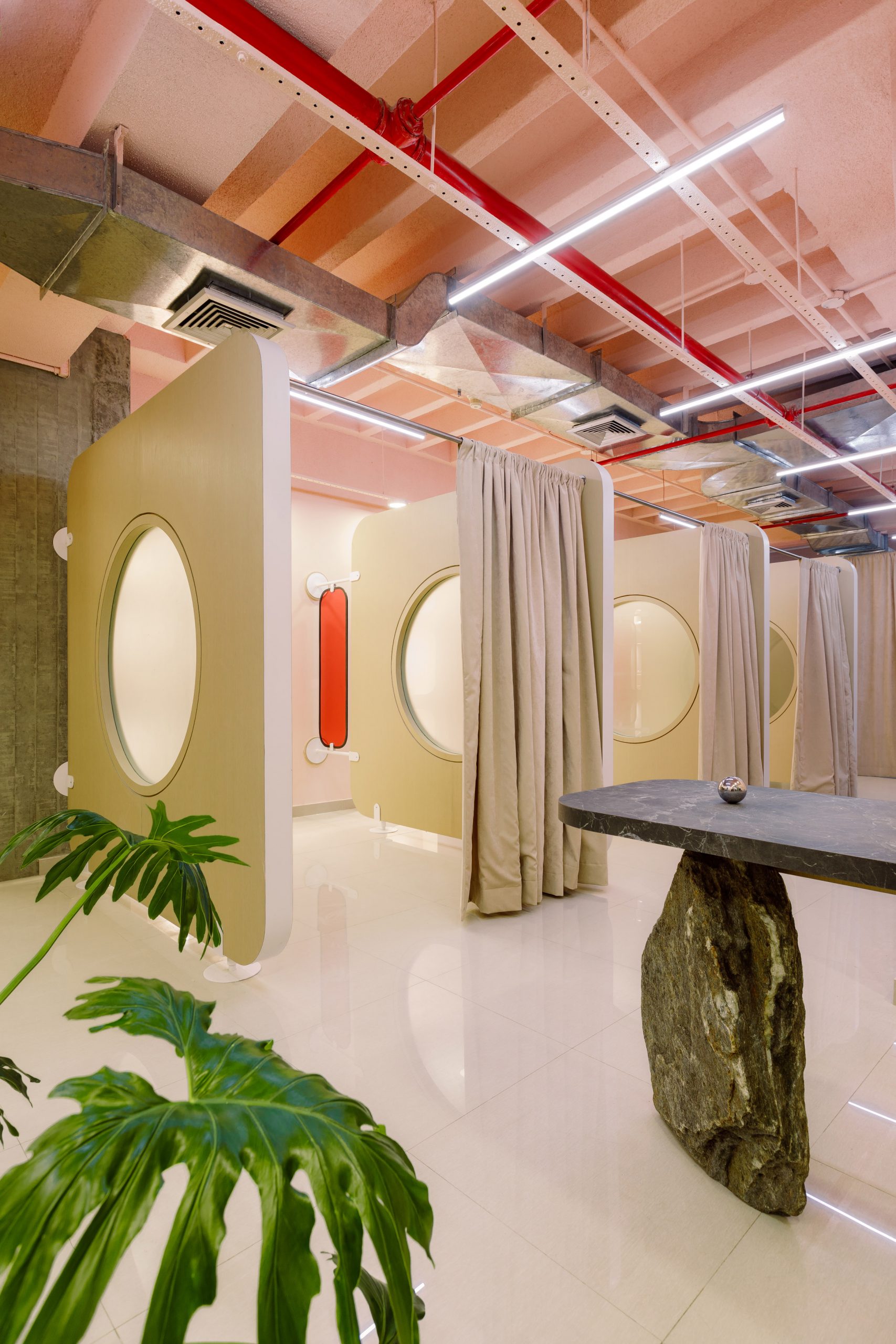 “We were approached by a client asking us to design a day spa in Caracas, stating literally that they wanted something ‘out of this world’,” the studio said.

“Upon considering this we decided to act faithfully on the client’s idea and create an absolute contrast to the urban context around the location with an architecture aiming to evoke the imagery of outer space, the mysterious and ‘other worldly’.” 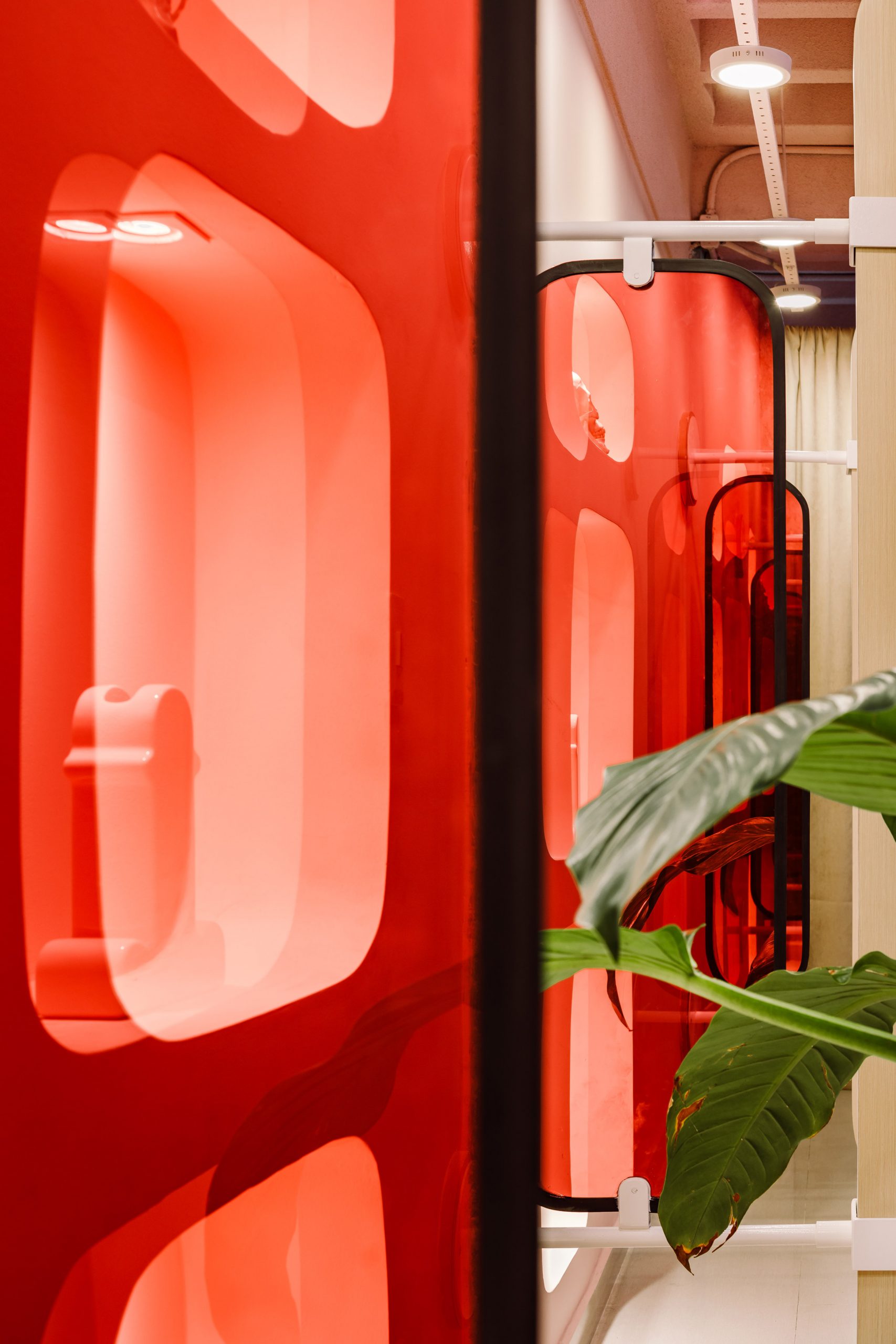 After studying visual aspects in science fiction movies, the studio came up with the concept for a spa with furniture and architecture designed to mimic 2001: A Space Odyssey’s settings and characters.

“We would endeavour through the deconstruction of the sets and scenography created by Stanley Kubrick and Harry Lange to generate more than a spa, to create a space of surreal perspectives, a diffuse threshold between earth and outer space,” added the studio.

Large formica boards with rounded edges are fronted with circular cutouts and filled with opaque glass windows. The structures are intended to reference the artificial intelligence being HAL from the movie. 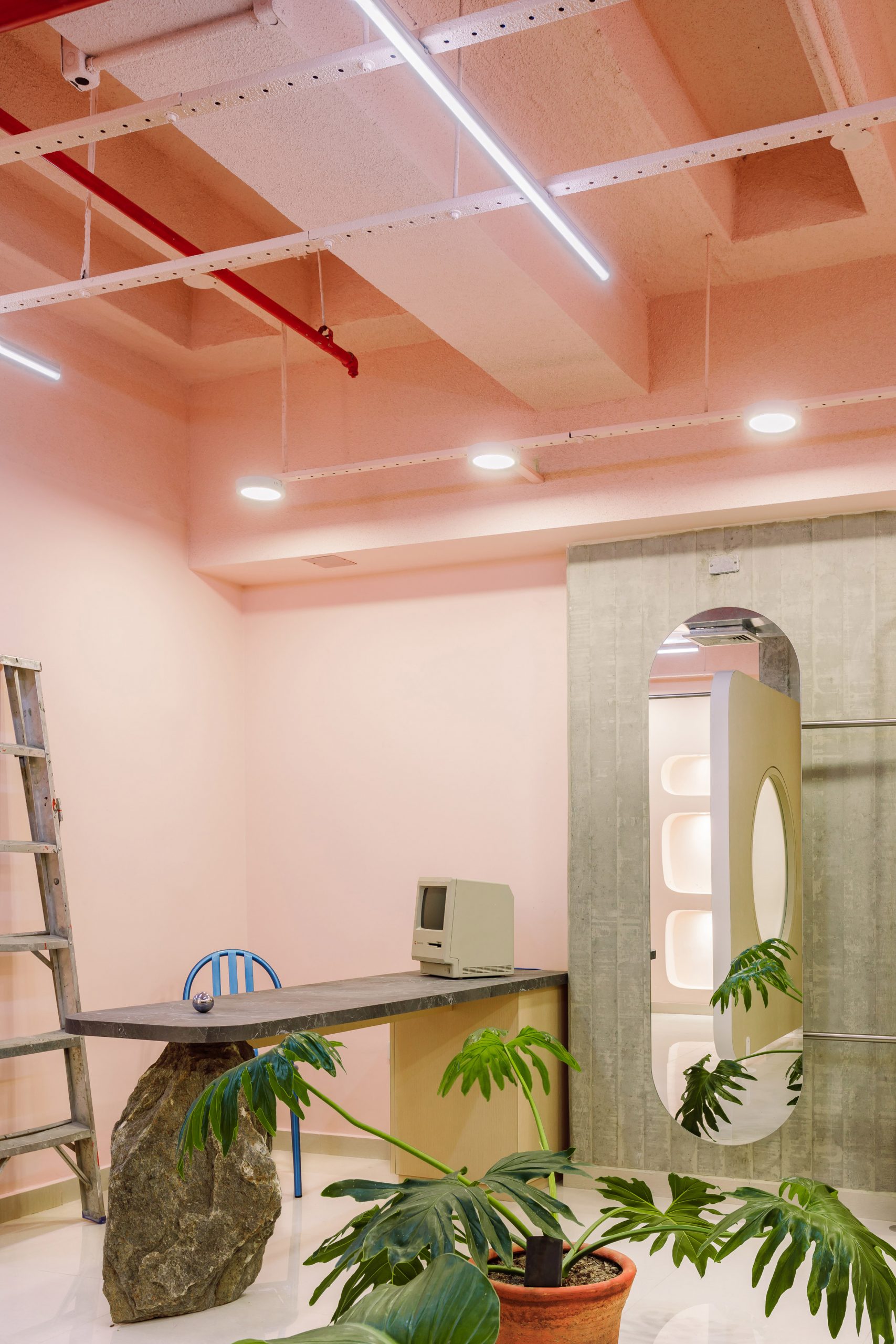 Beige curtains cover the front of each unit to provide privacy for patrons during their treatments. Additional rose-hued glass separations attach to the panels blurring the view between the cubicles.

A big stone, reminiscent of a meteorite, was found outside of the city and is situated as a decorative element underneath the black formica reception desk. 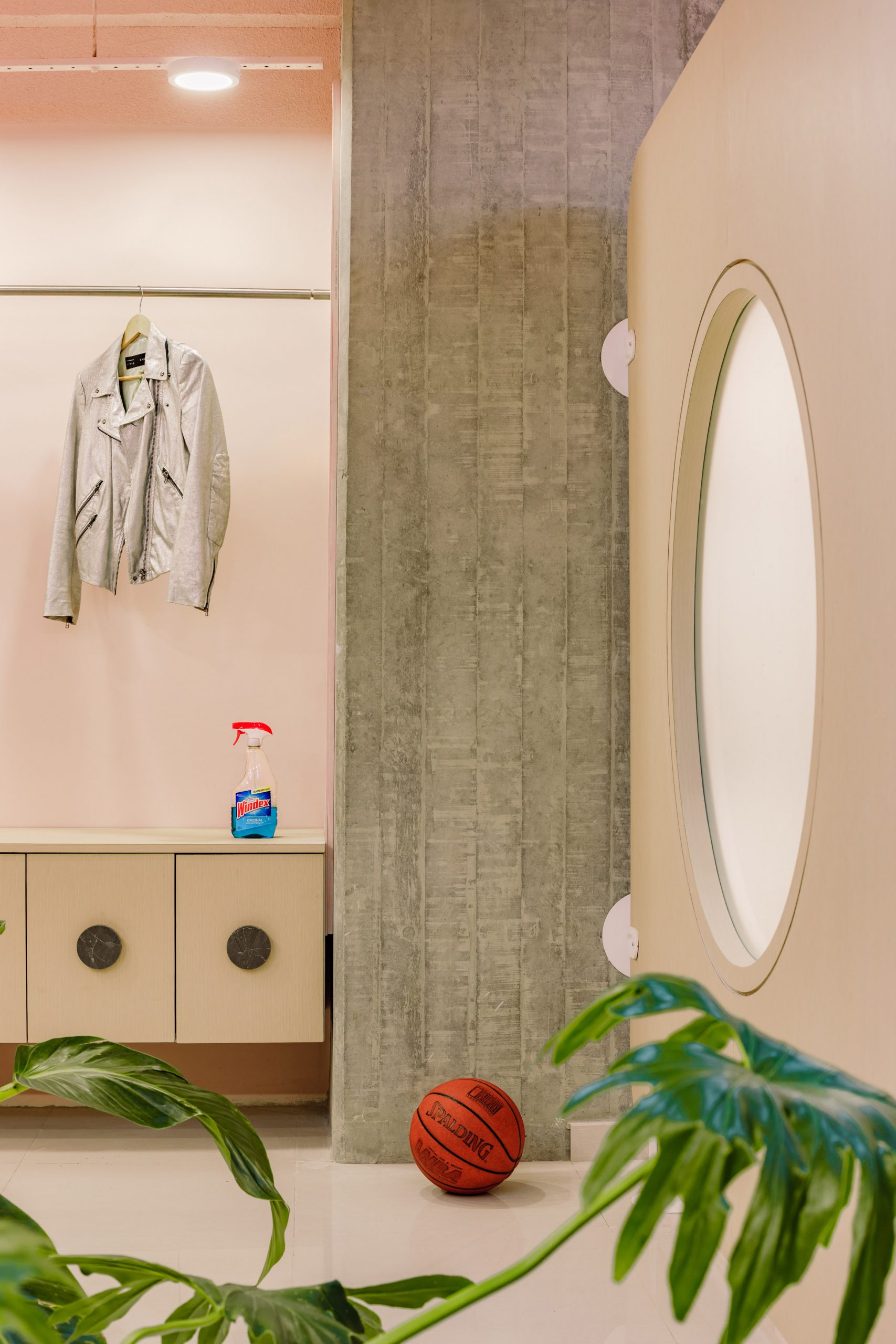 Green plants and fake grass carpet are among the details added to the space as reminders of life on Earth.

An exposed ventilation system and red pipes span across the ceiling, which is masked in pink stucco. Other furnishings in the spa include a pale cabinet fronted with large formica knobs and a wall of mirror panels. 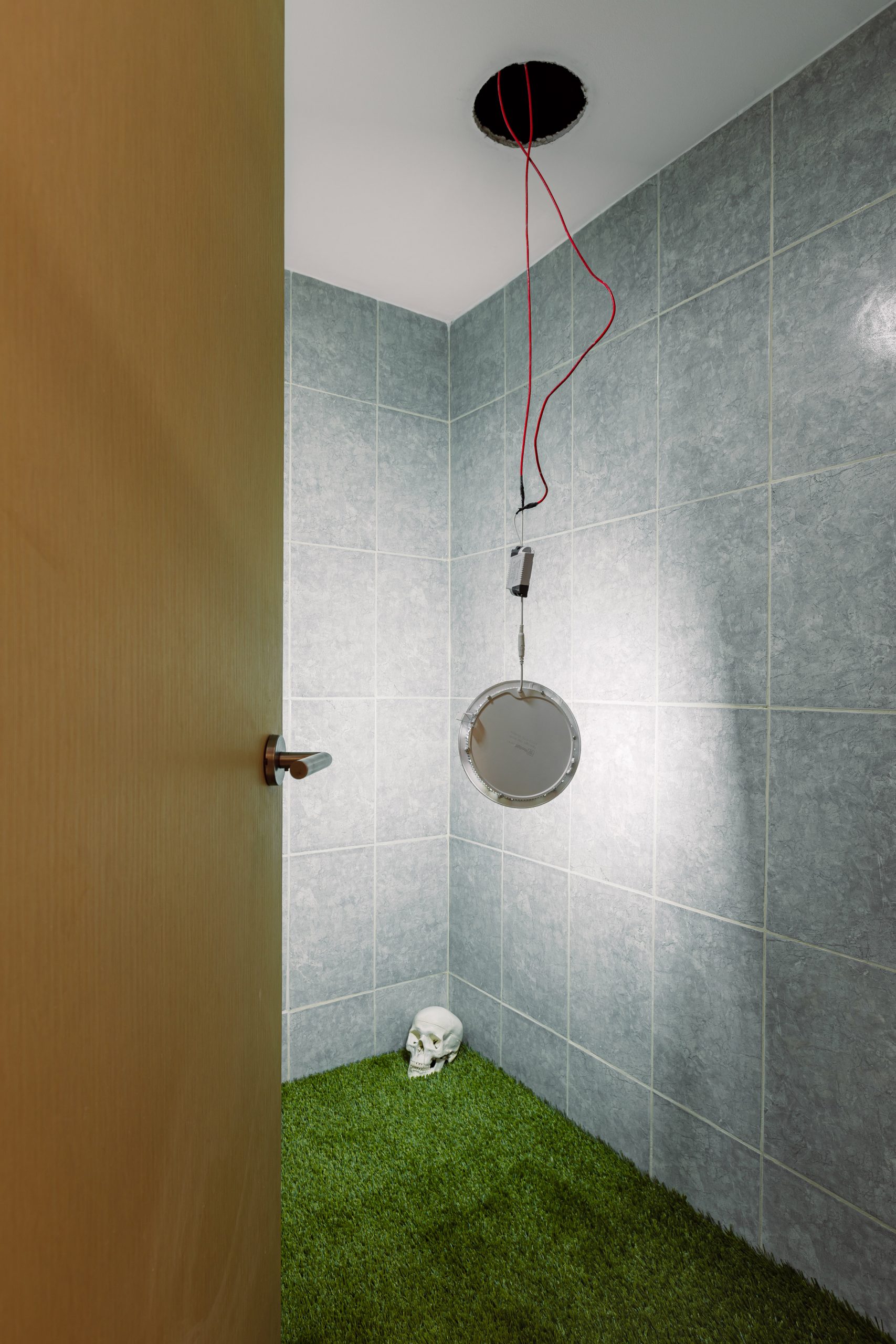 In 2019, Design Museum director Deyan Sudjic curated an exhibition that explores the life and work of Kubrick, the film’s director. Furniture and replicas of sets from 2001: A Space Odyssey were among the objects on display.

Photography is by Saúl Yuncoxar.