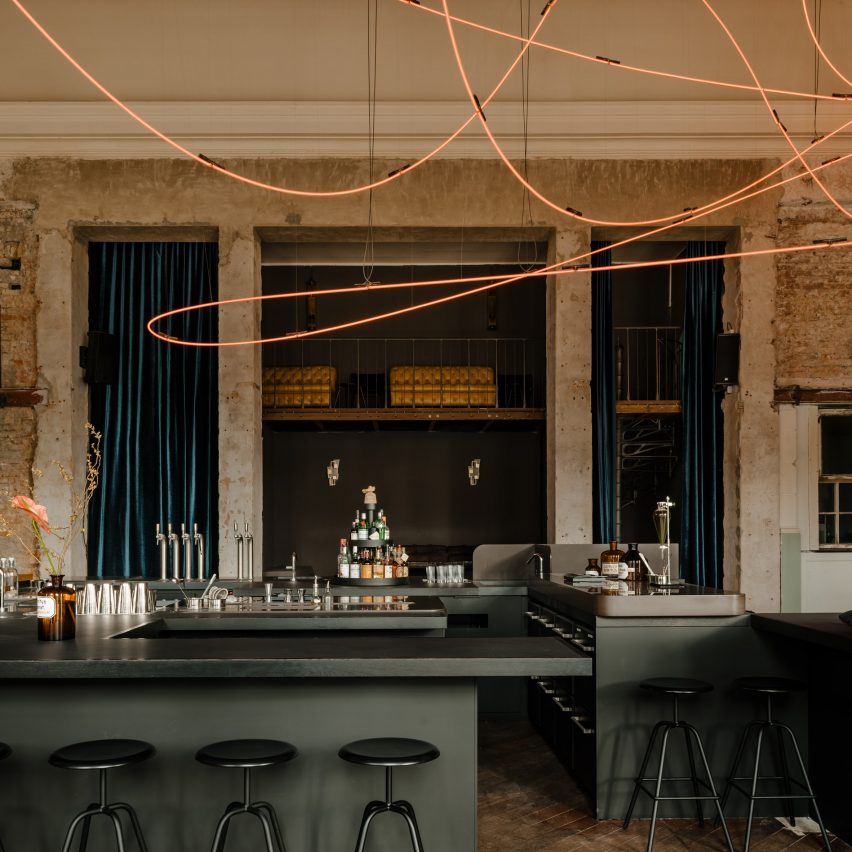 A tangle of red neon tubes hangs at the centre of Kink restaurant and bar in Berlin, which has been designed by owners Oliver Mansaray and Daniel Scheppan.

Kink was created by Mansaray and Scheppan to blend contemporary art and gastronomy “with a touch of nonsense”. 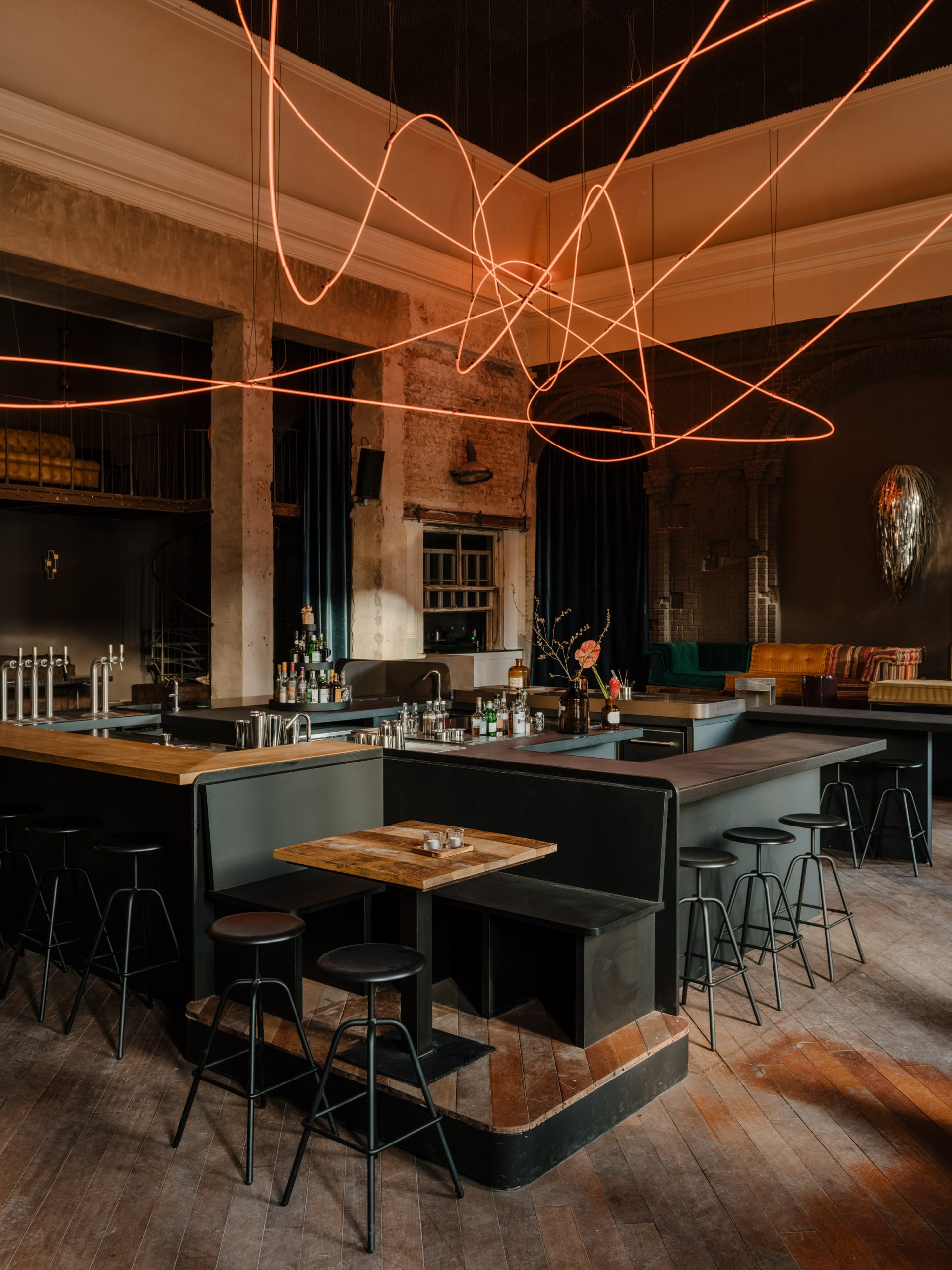 It occupies a restored industrial building in Pfefferberg, a former brewery in Berlin’s Pankow district that is now an arts and culture hub.

Several studios are on-site, including one belonging to Danish-Icelandic artist Olafur Eliasson, as well as other attractions such as the Museum of Architectural Drawings. 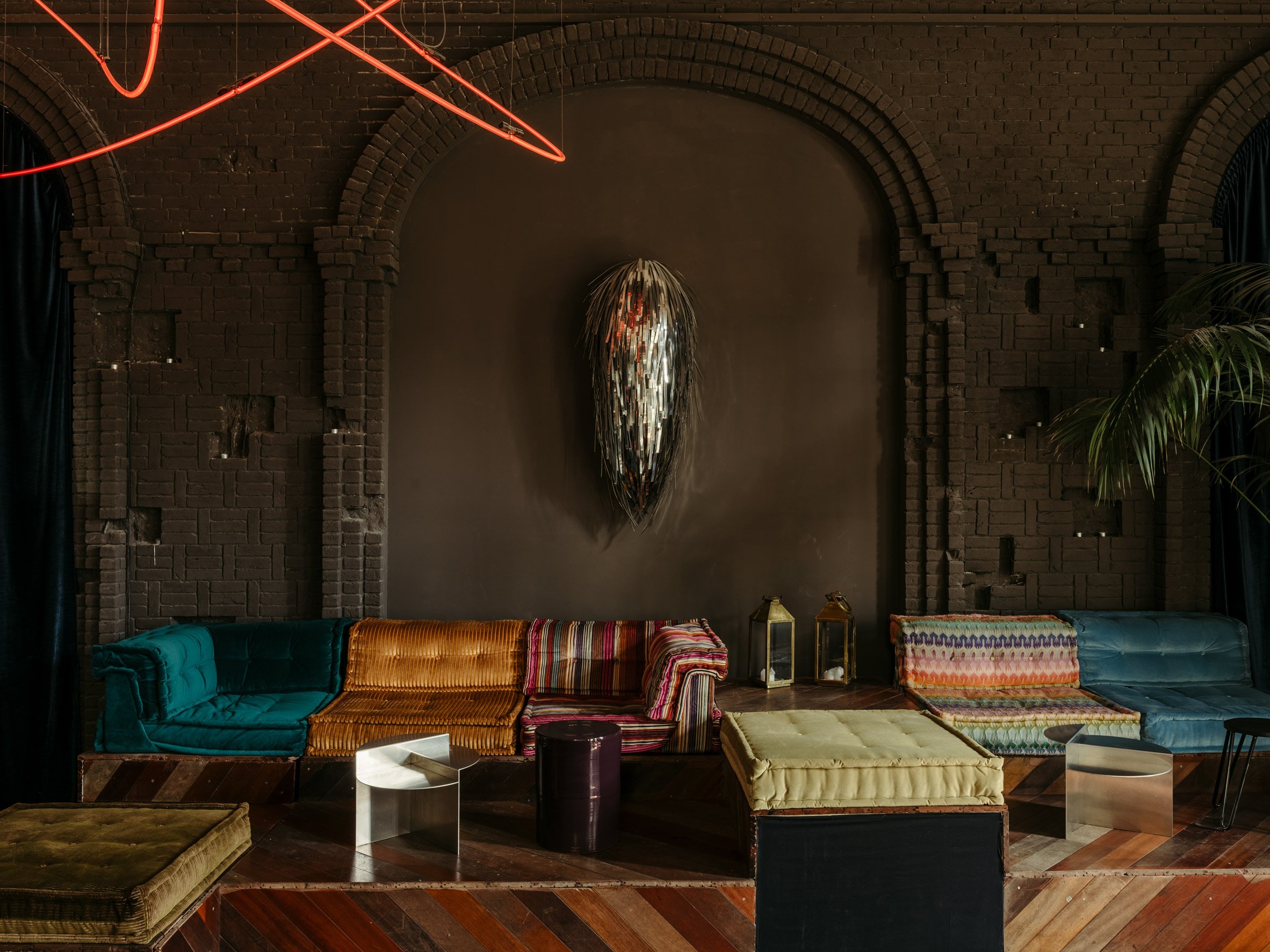 Mansaray and Scheppan worked alongside a host of creatives to realise the eclectic interiors of Kink.

Among them is Swiss artist Kerim Seiler, who suspended the bespoke light installation from the eight-metre-high ceiling of the restaurant’s main dining room.

Titled Spaceknot, the piece is made from over 100 metres of red neon tubing that loops and intertwines to form an abstract, scribble-like shape. 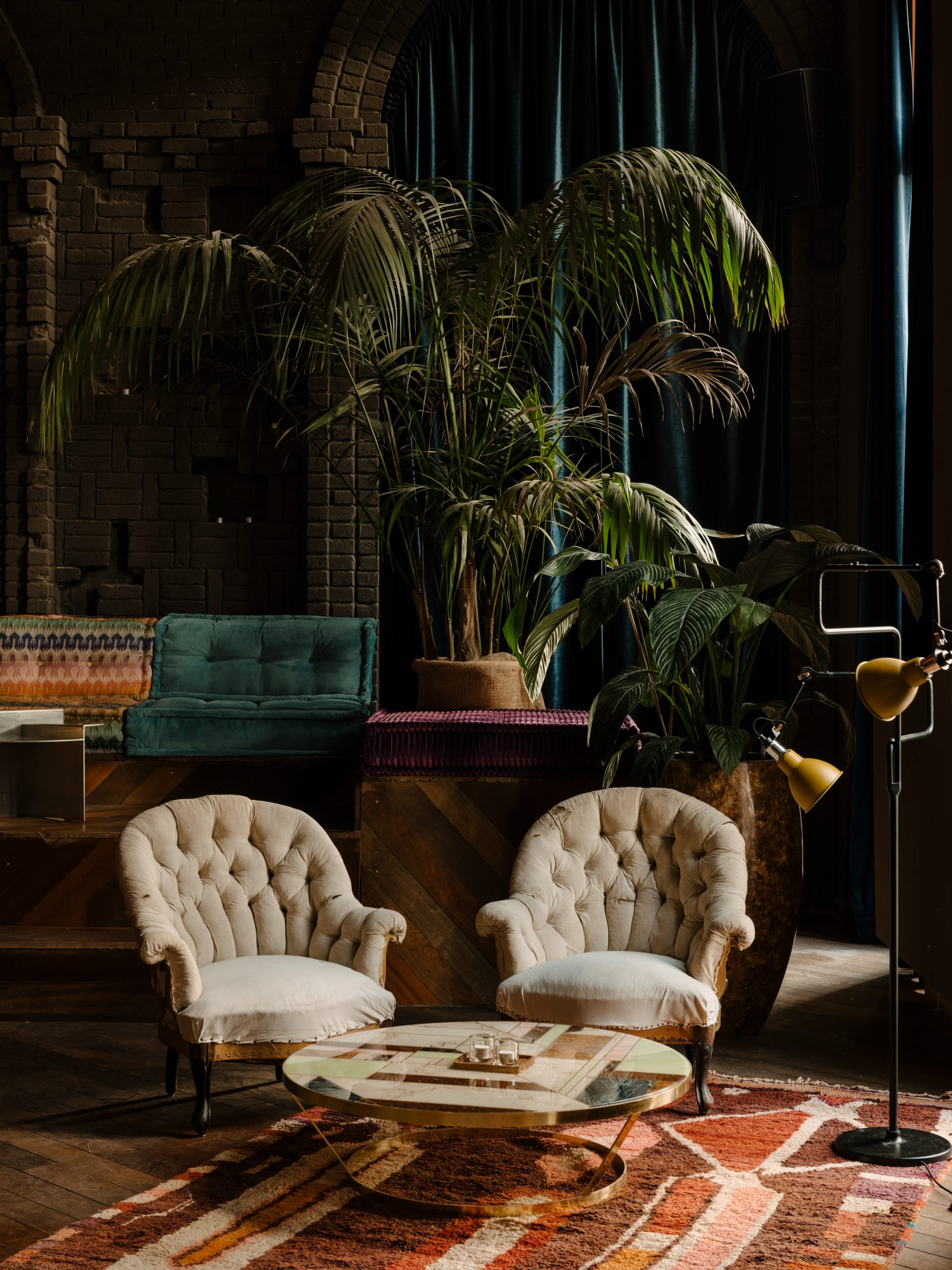 An L-shaped cut-out in the corner of the counter forms a seating nook for guests, who can alternatively choose to sit on the black high stools that run around the edge of the bar. 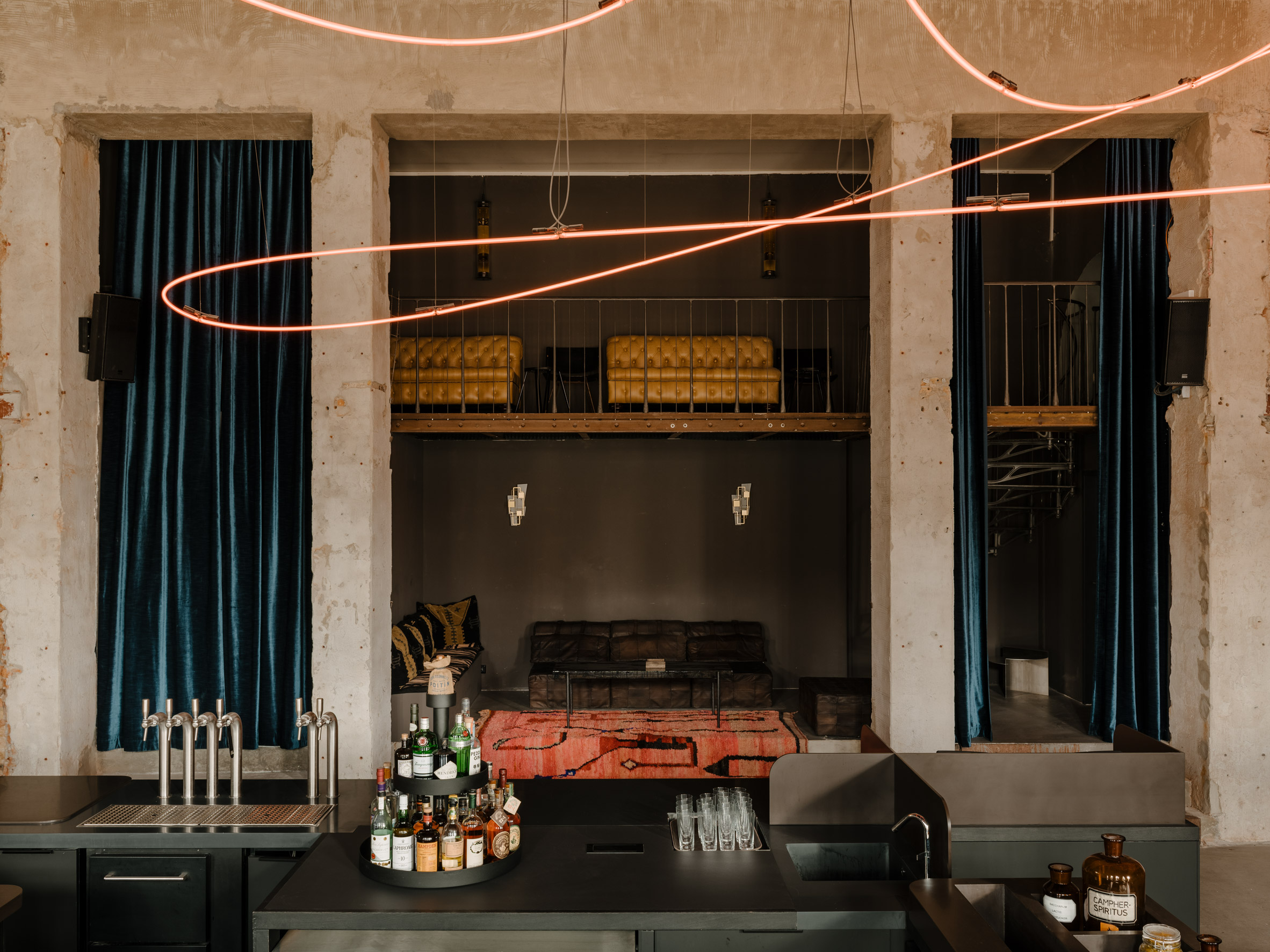 More seating is available at the rear of the room, set against a charcoal-coloured brick wall.

Here there are a series of Mah Jong sofas by Roche Bobois, upholstered in a clashing mix of multicoloured zigzag fabric, deep green velvet and ochre-yellow corduroy.

Mounted directly behind is a fringed metallic sculpture by German artist Philipp Emanuel Eyrich, made out of thin strips of steel. 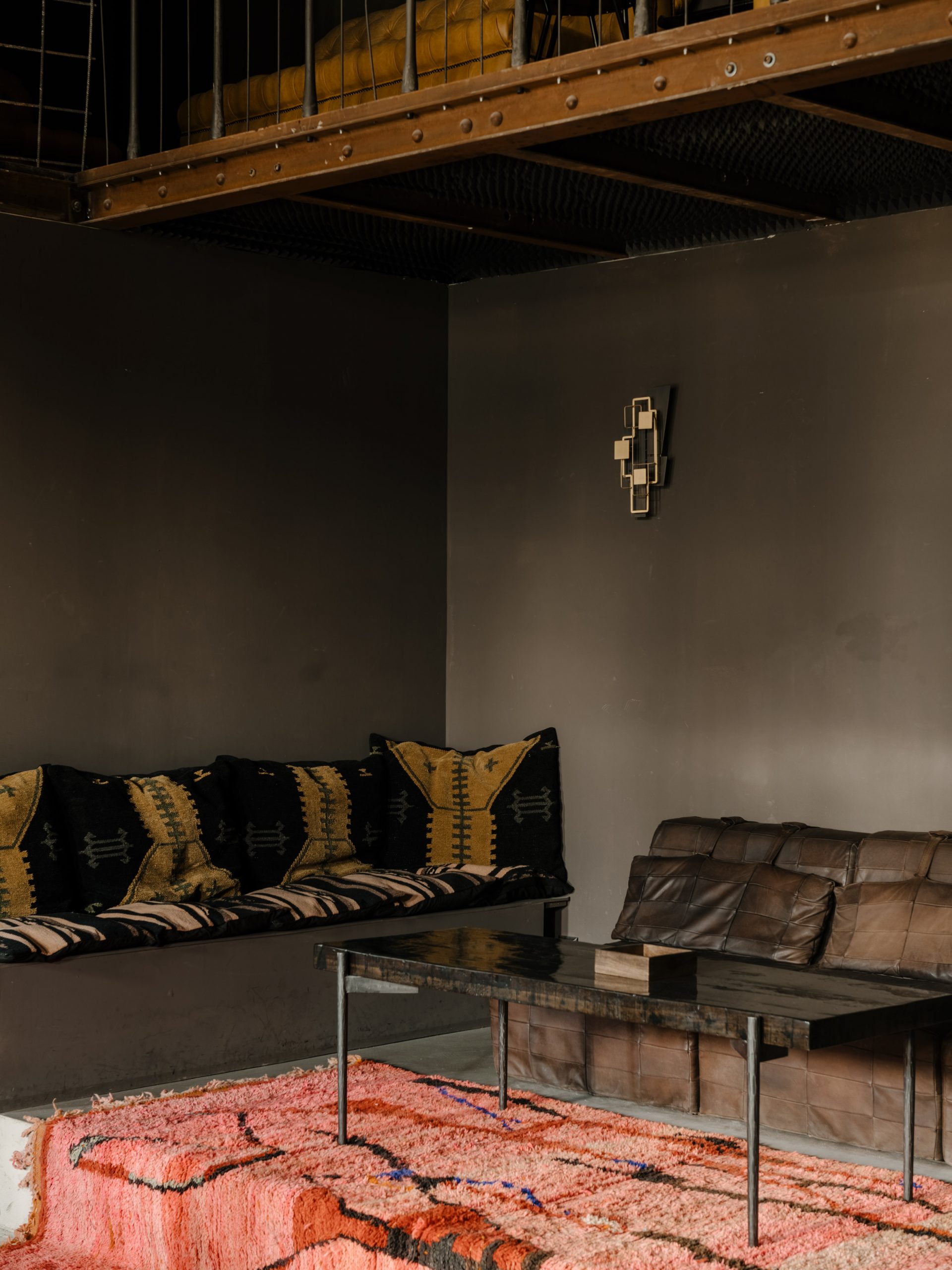 Other lounge-style areas have been created throughout the rest of the space, dressed with furnishings found in nearby antique markets and patterned Berber-style rugs. There are also a handful of leafy potted plants.

A dark and cosy two-level dining area has also been set into a wall at the side of the room, partially obscured by heavy teal-blue curtains. 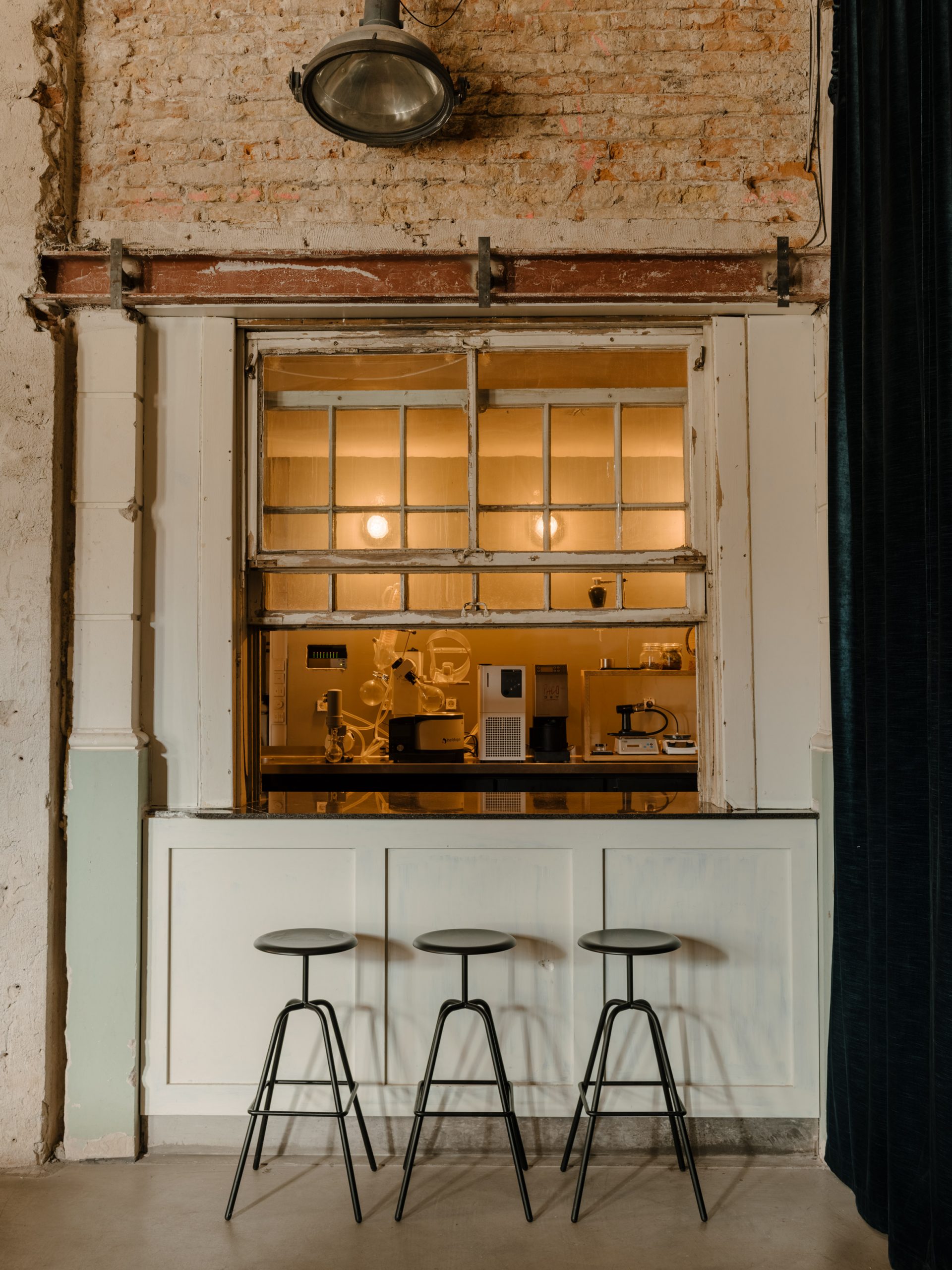 At ground level, there is additionally a “culinary laboratory”, where the restaurant’s chefs and mixologists can freely experiment with processes like fermentation, distillation and infusion to create ingredients for both dishes and drinks on the menu.

A suspended staircase leads up to a mezzanine level gallery-style space, where artworks will also be displayed. 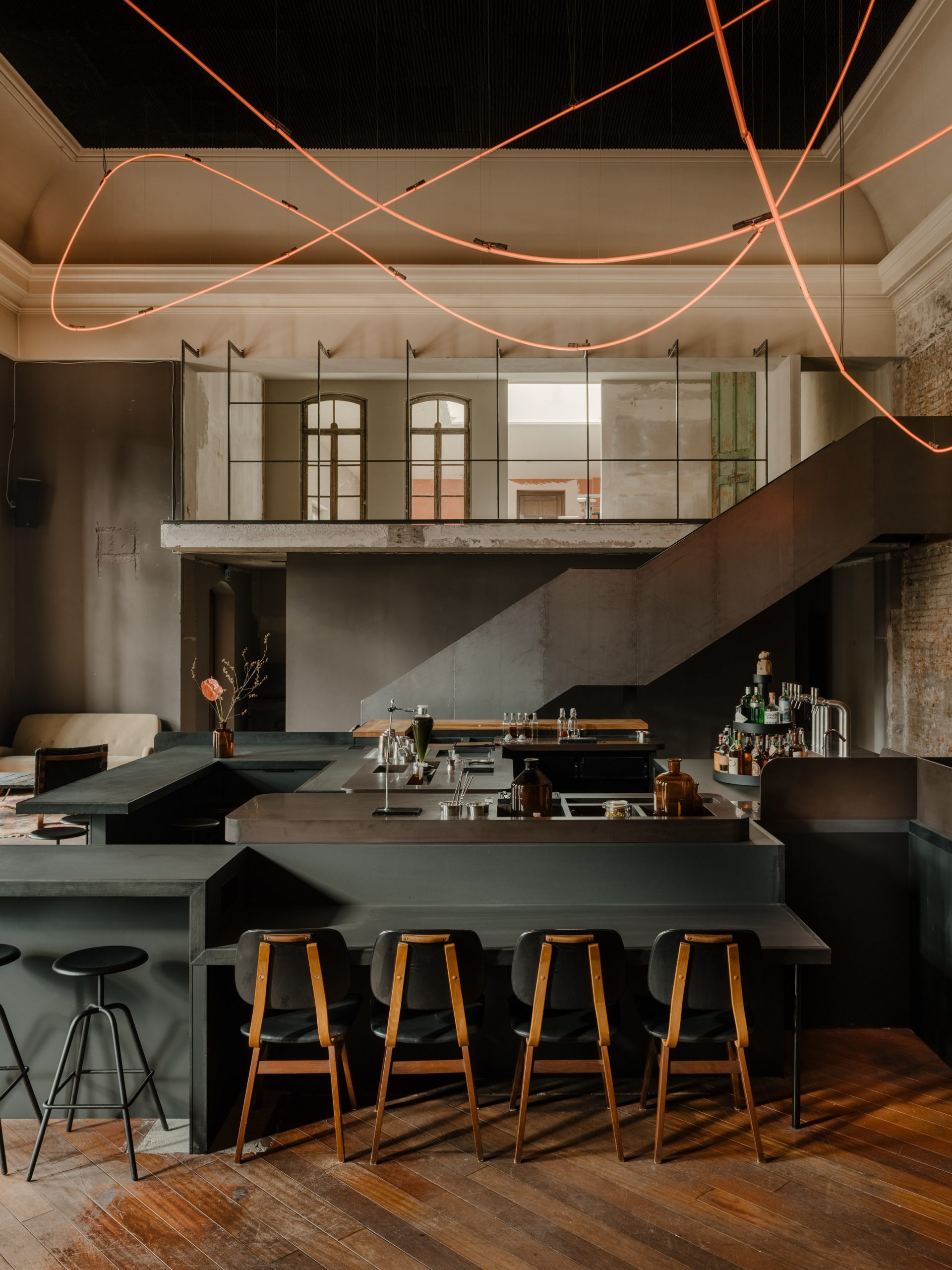 The trendy city of Berlin is home to several striking dining spaces. Others include LA Poke, which Ester Bruzkus Architekten designed to resemble David Hockney’s 1967 painting A Bigger Splash.

Surfaces inside the restaurant are pastel pink, cobalt blue or sunshine-yellow, while graphic patio-style flooring runs throughout.

The post Kink restaurant in Berlin is dominated by a red-neon light installation appeared first on Dezeen.