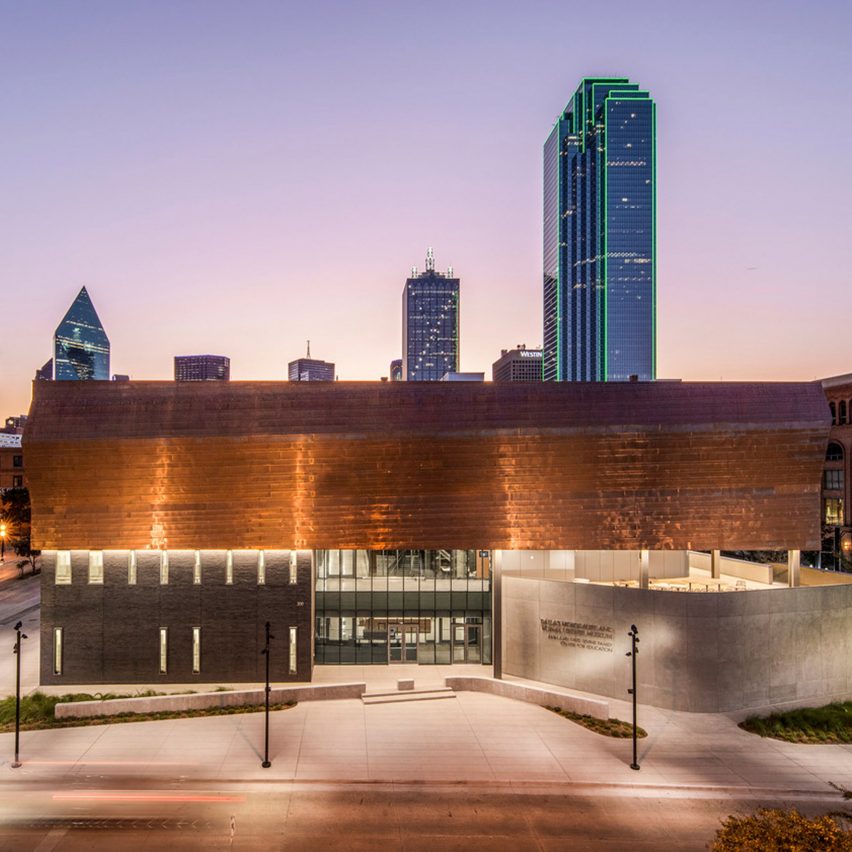 Texas architecture firm Omniplan has topped the Holocaust museum in Dallas with a copper crown to represent “the strength of those who have stood up to injustice”. 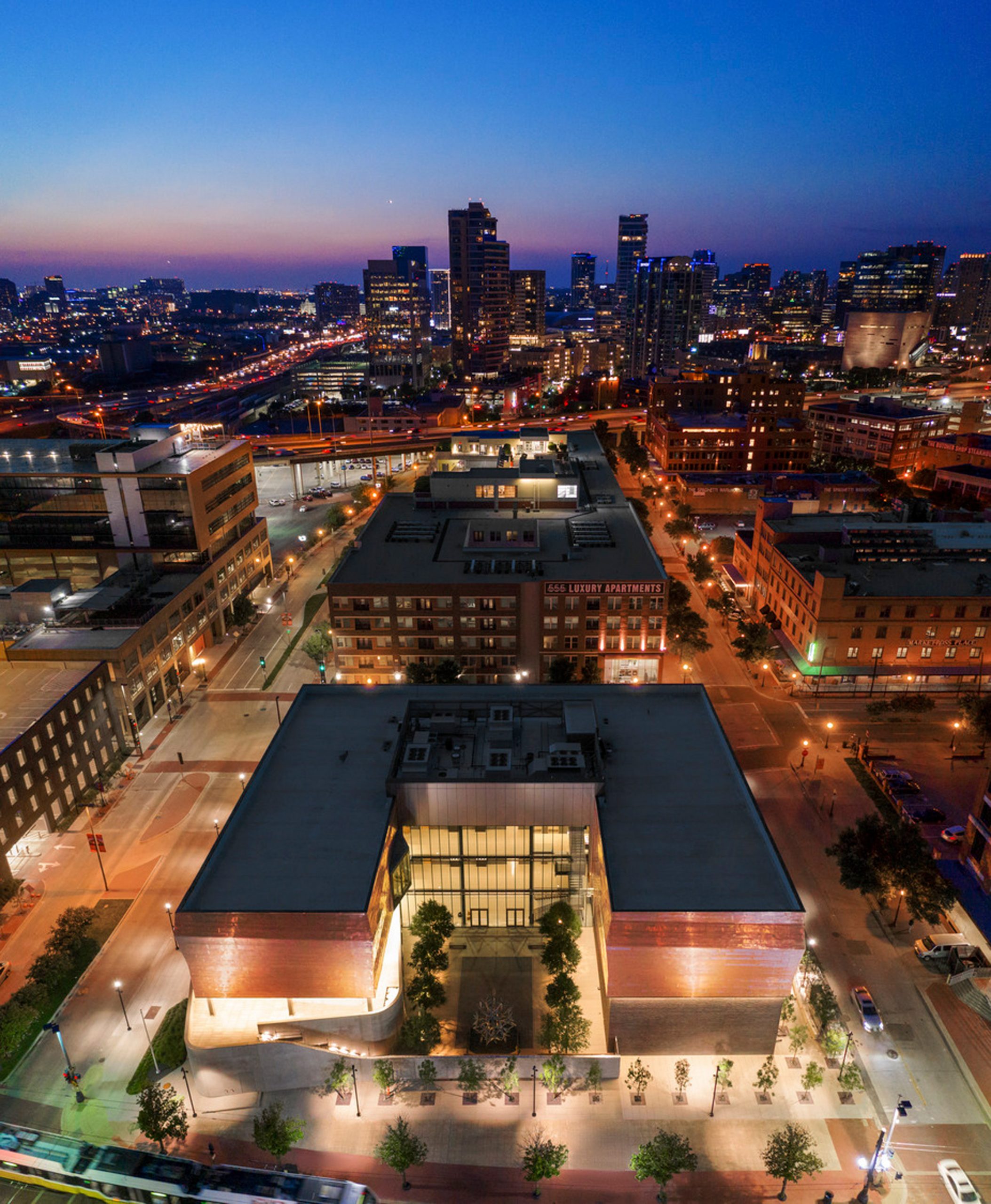 Omniplan created the building in a U-shape around an outdoor courtyard.  The firm, which is based in the city, used dark iron spot bricks to form the majority of its 52,300-square-foot (4,859-square-metre) museum, while the upper floors are clad with a golden-red crown made from copper panels.

“The dark brick is used to foreshadow the solemn content the viewer is about to experience,” said Omniplan, which was founded in 1956 by George Harrell and E G Hamilton. 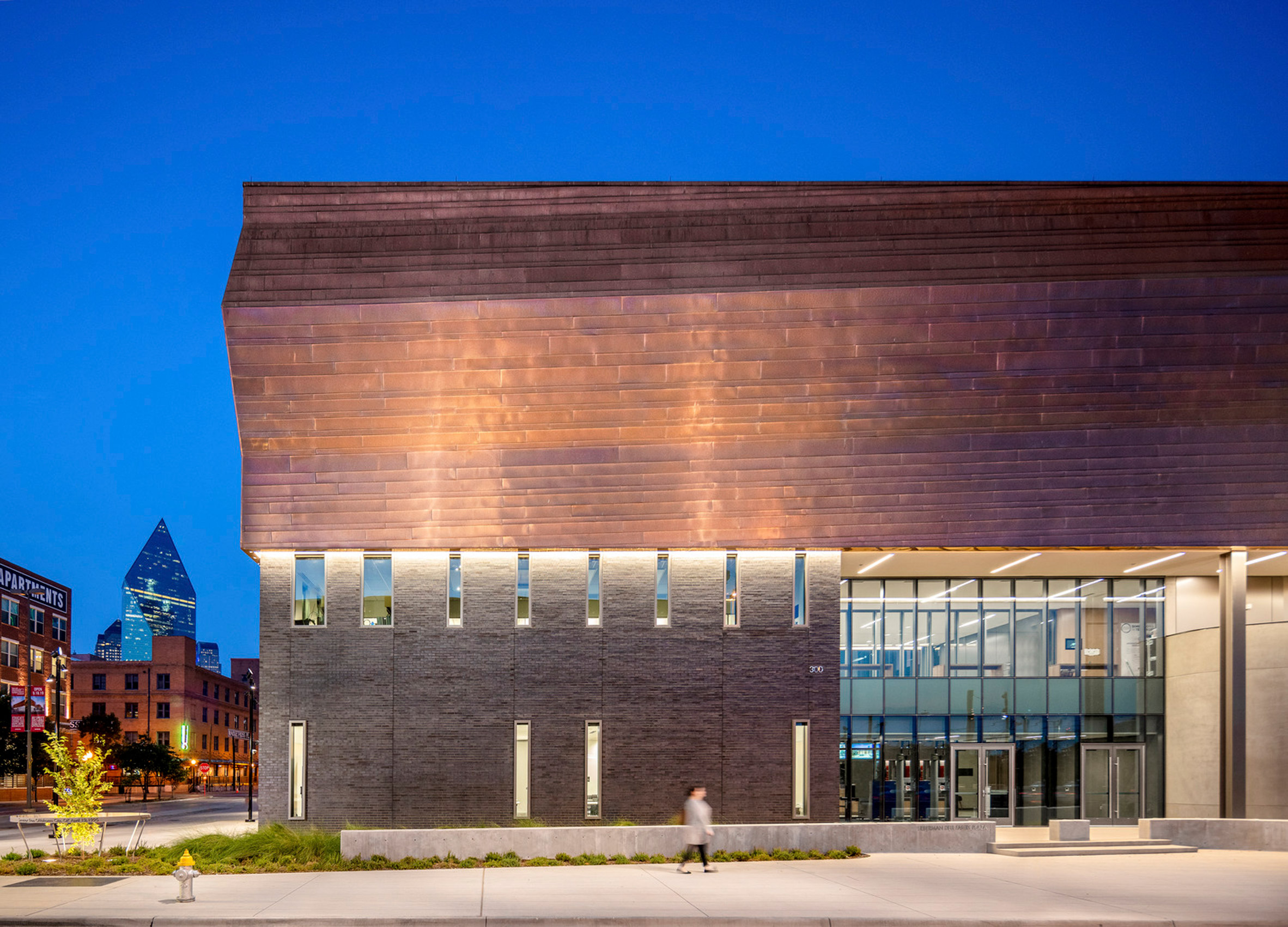 The museum’s mission is to promote human rights and teach the Holocaust, in which six million Jews and five million other people lost their lives.

“While no building can ever represent the inhumane injustices that occurred during the Holocaust, it can certainly be a vessel for the meaningful presentation of the repercussions, human experiences and realities thereof to ultimately influence impactful societal change,” said Omniplan. 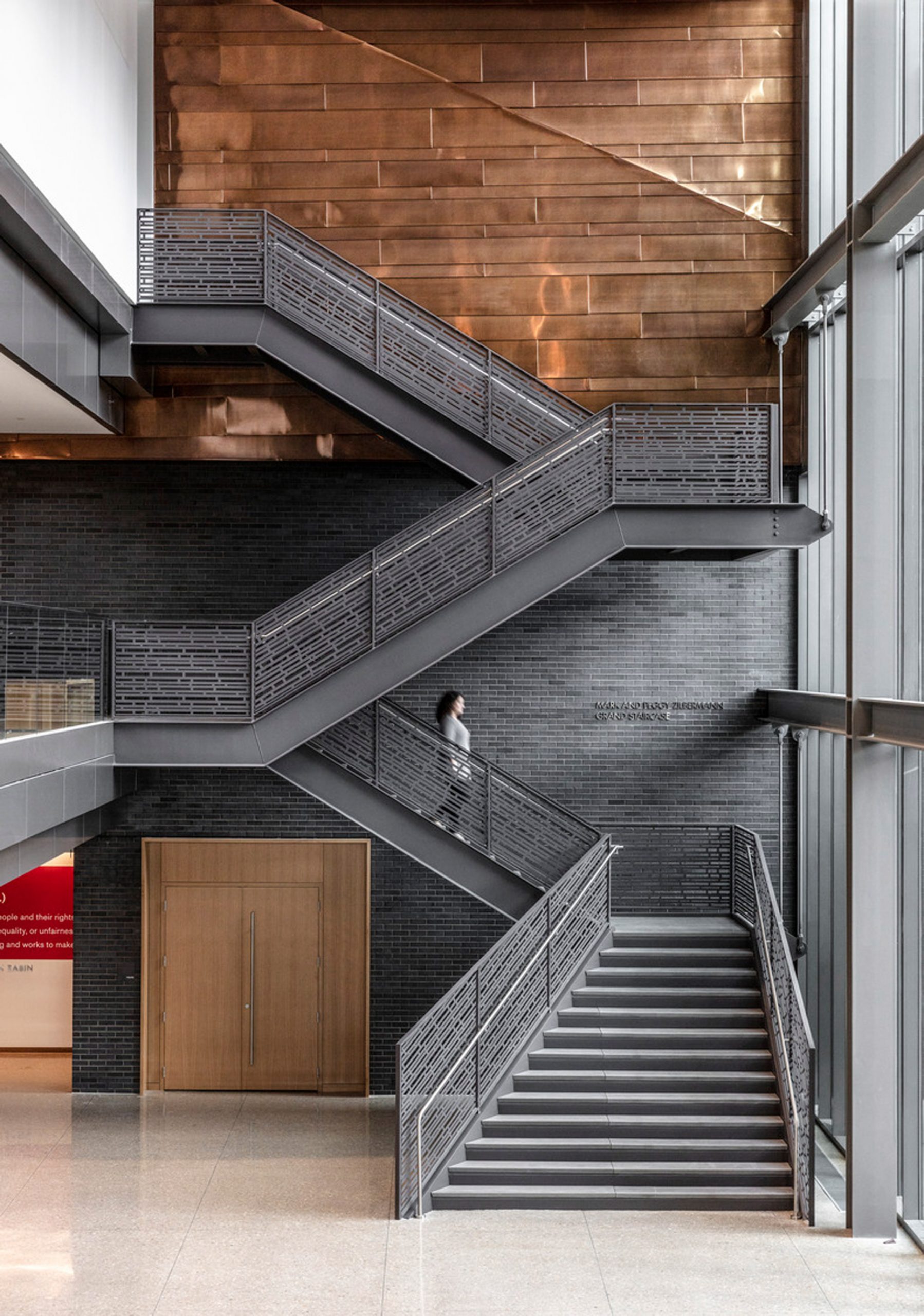 The upper portion of the building is separated from the dark grey base using a recessed light that continues around the building’s perimeter. The copper, which will naturally weather over time, was used to communicate the resilience of certain communities that have suffered because of hatred and prejudice.

“The material was chosen to represent the strength of those who have stood up to injustice and inequality throughout history,” said Omniplan. 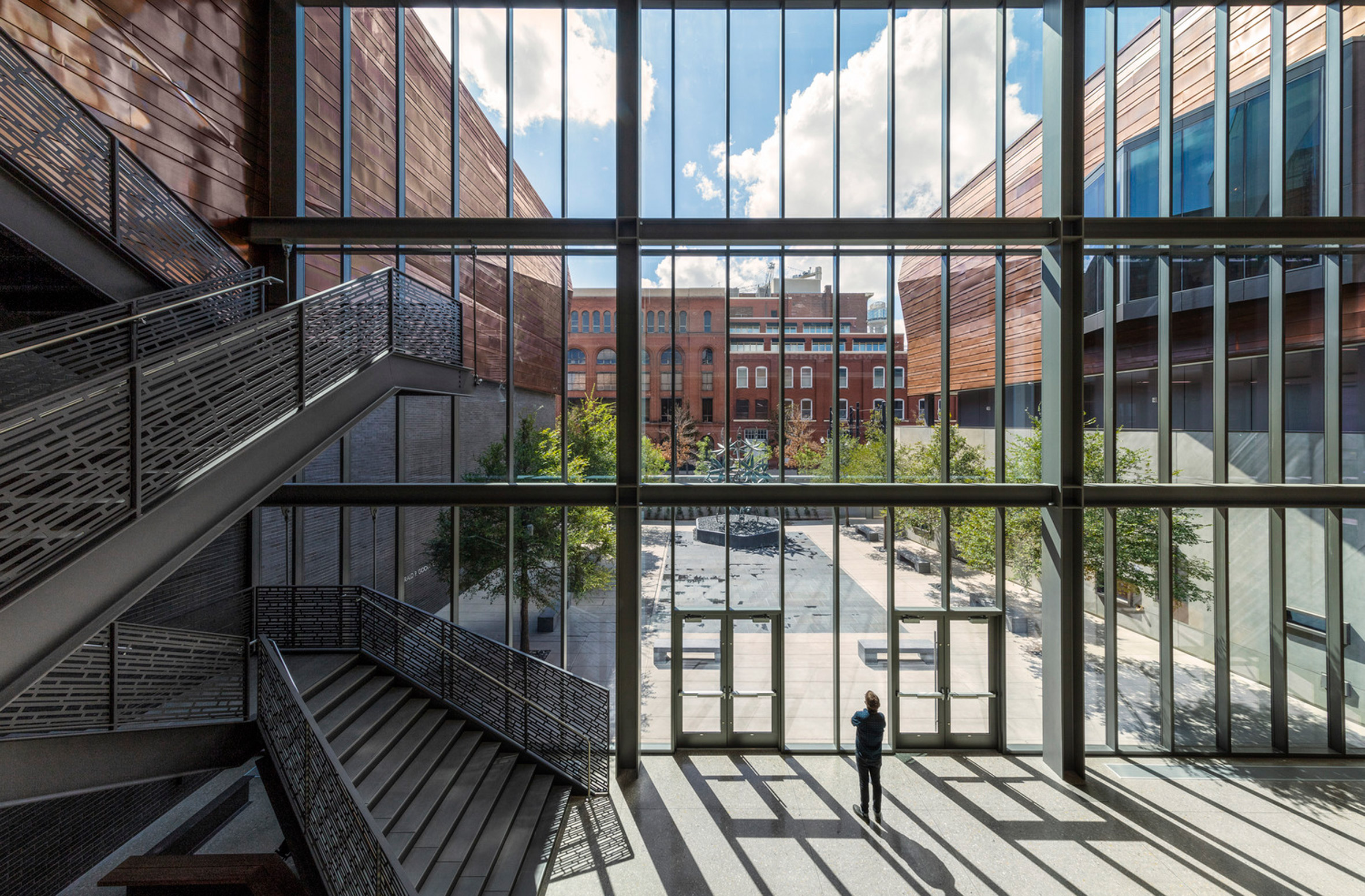 The contrasting dark and red materials continue inside the museum’s atrium, which is fronted by a double-height glazed wall that ushers natural light inside.

The ground floor contains two theatres, an exhibition room, a classroom and a museum store. Offices are located on the floor above.

The top storey contains several areas for exhibits on human rights, genocide and the Holocaust – also known in Hebrew as the Shoah and called this at the Dallas museum. 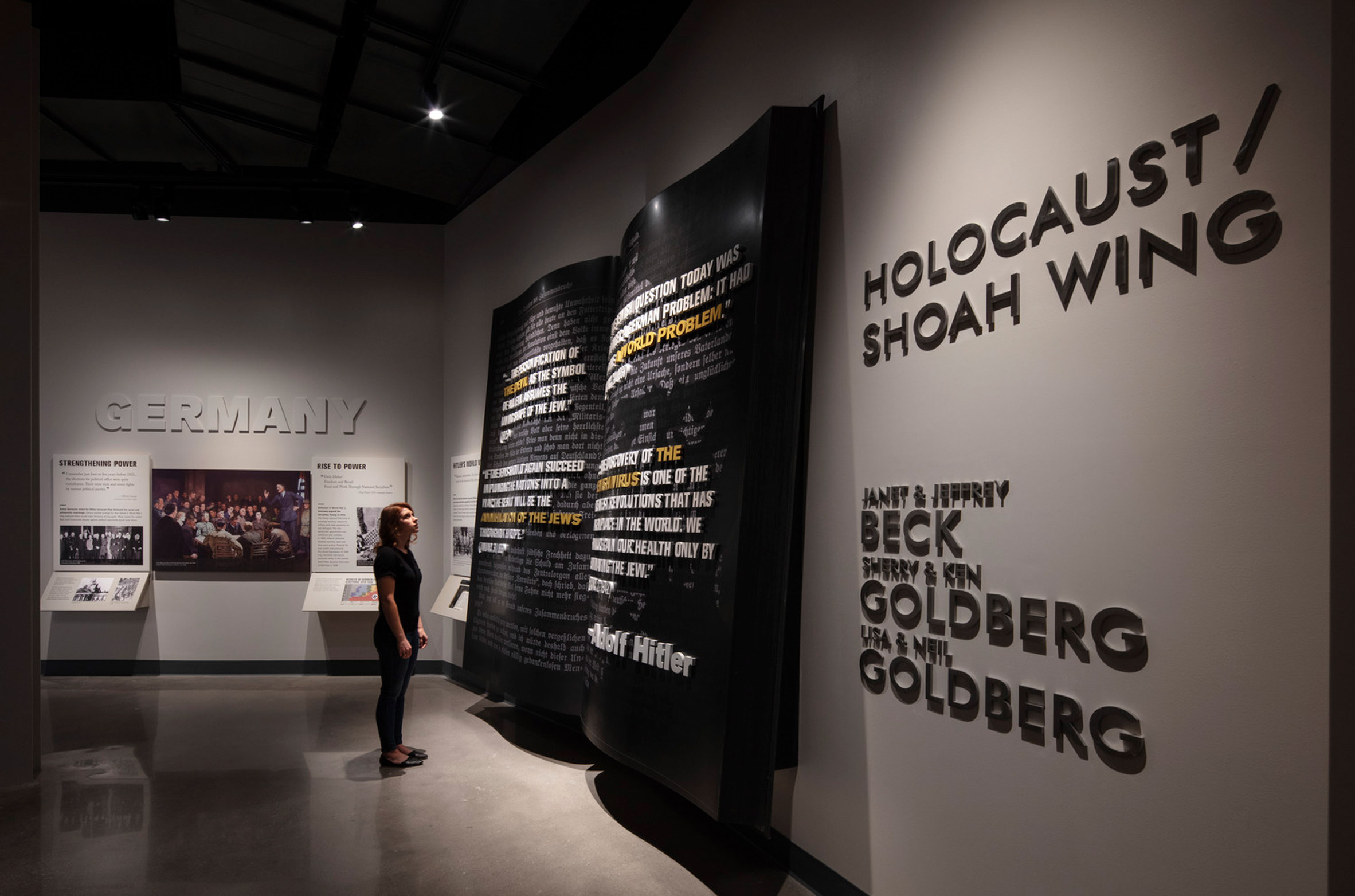 Exhibition design was done by Berenbaum-Jacobs Associates (BJA), which has offices in Los Angeles, Jerusalem and New Jersey. The exhibits include 120 survivor testimonies from the Holocaust, and rooms vary from dark to more light spaces.

A memorial space and reflection gallery is also included on the top floor. 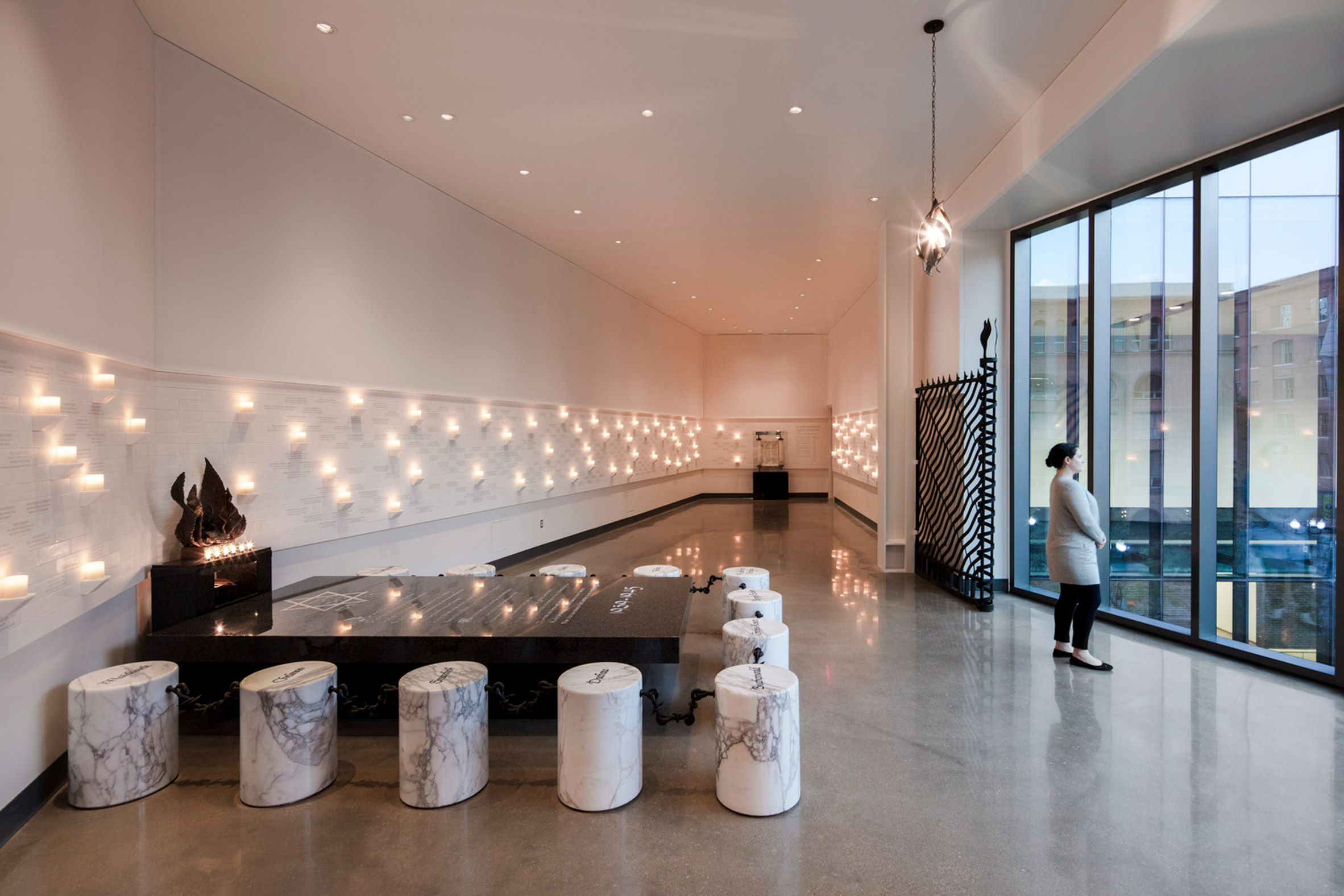 Other projects that commemorate the Holocaust are Studio Libeskind’s star-shaped monument in Ottawa, the Ulma Family Museum of Poles Saving Jewish People in southeast Poland and Bologna Shoah Memorial.

Photography is by Jason O’Rear.