Local studio Hemaa based its renovation of Sierra Negra, which has undergone a number of remodels since it was first built by Álavrez, on the Mexican architect’s original plans. 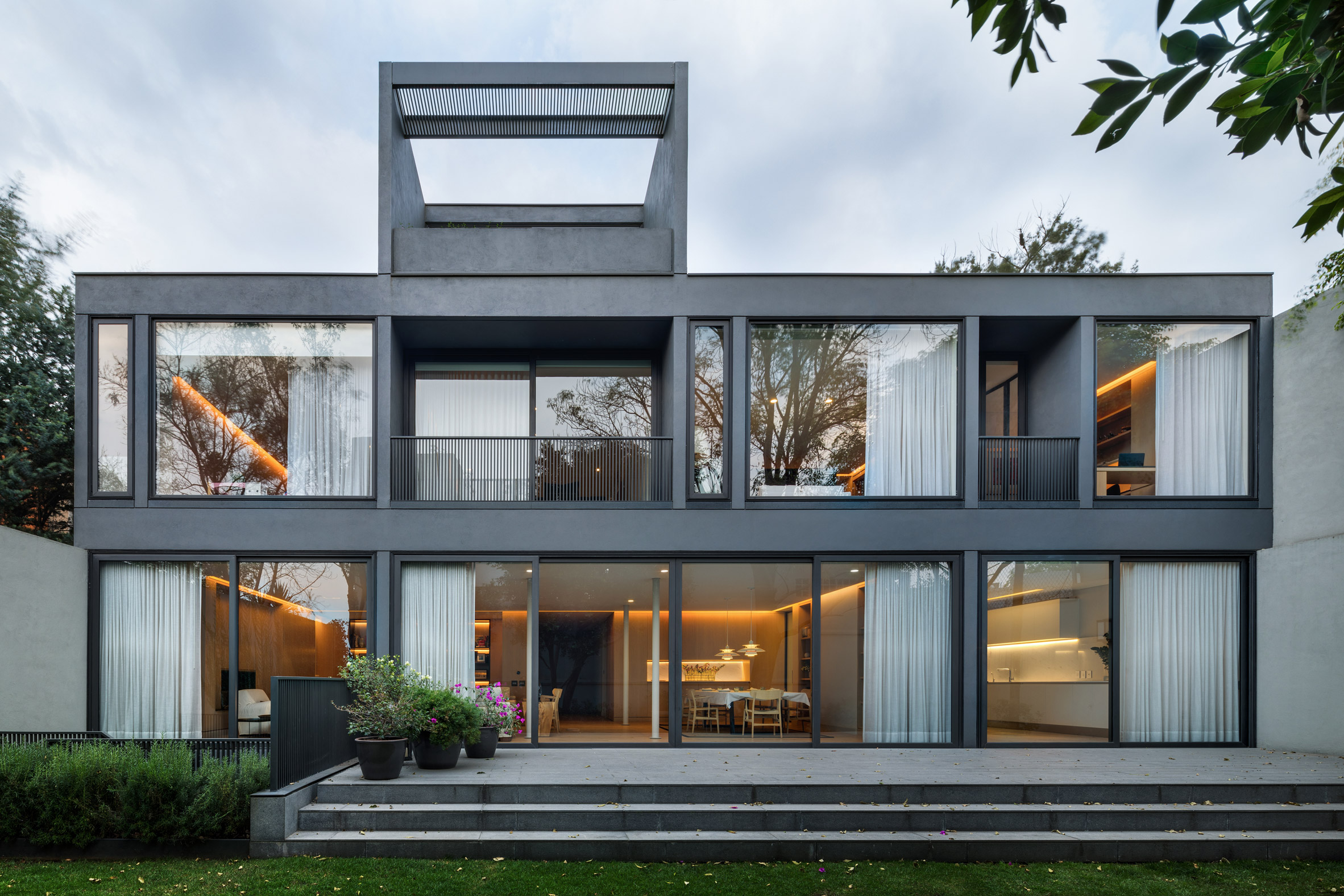 “After some research on the property, we were able to trace back to the original documents of the house, designed by the renowned Mexican architect Augusto H Álvarez back in the ’50s,” said the studio.

“We decided to align our proposal to the base grid plan of this construction, which assembles the distribution of spaces around four structural axes every four meters.” A series of thin grates are paired with blank surfaces on the three storey house’s angular facade that is clad with dark grey stucco. The straight angles and materials used take cues from mid-century modern designs.

“The intention is that of evoking the lines of mid-century modern architecture through materiality traits and the exaltation of order and structural elements,” the studio continued.

While the front elevation has few windows to create privacy from the street, several rectangular windows, sliding glass doors and small porches cover the backside that overlooks a small fenced-in yard and patio space.

A boxy unit with an open roof protrudes from the top of the house to form the garden and terrace located on the top floor. 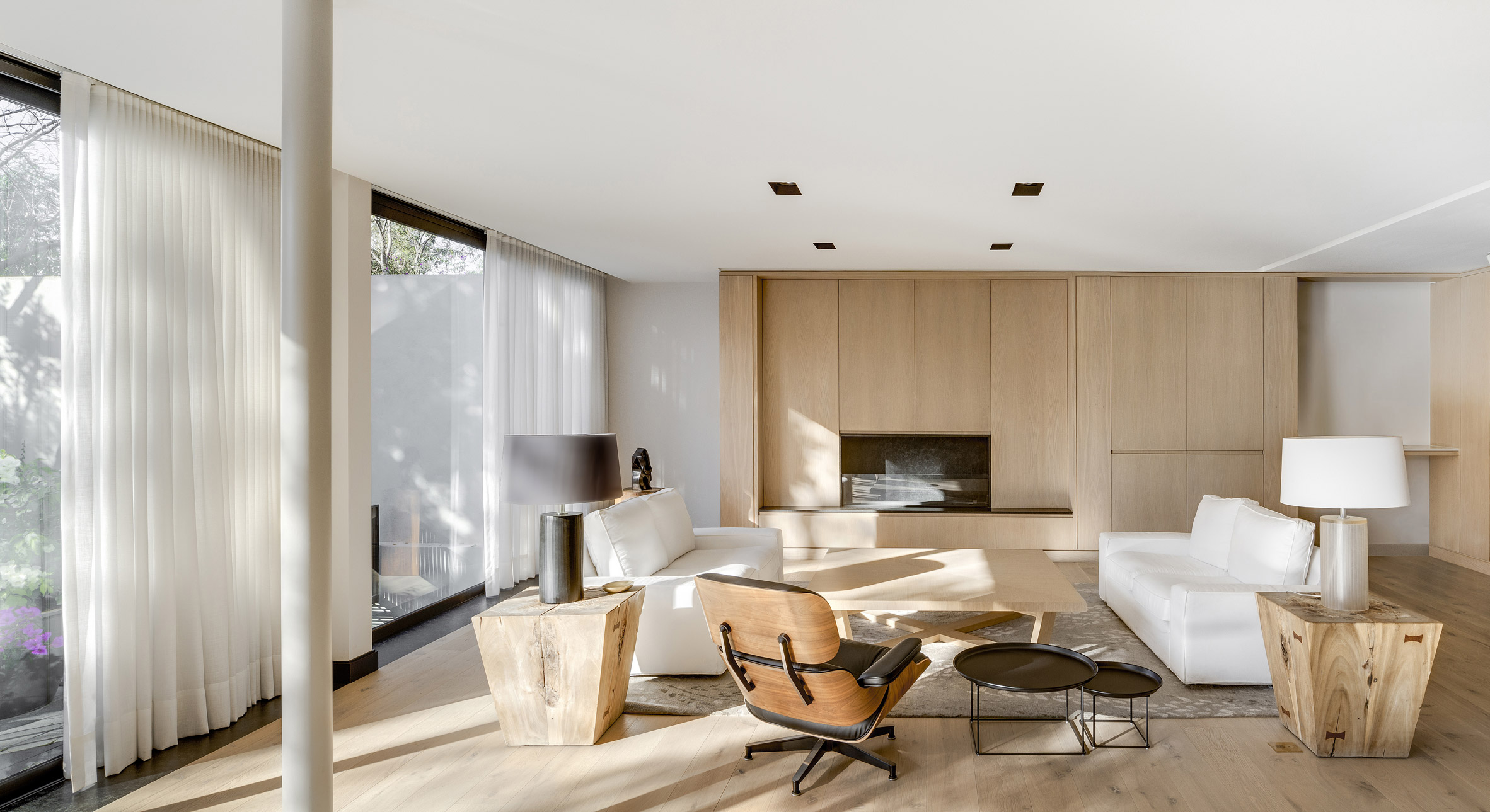 In contrast to the dark exterior, the interiors of the 220-square-metre house are brightened with light oak wood panels and shelves, white walls and round structural columns.

To intensify this the studio has added a chiaroscuro lighting effect to the foyer, an Italian art technique that uses light and dark tones to achieve a sense of volume. 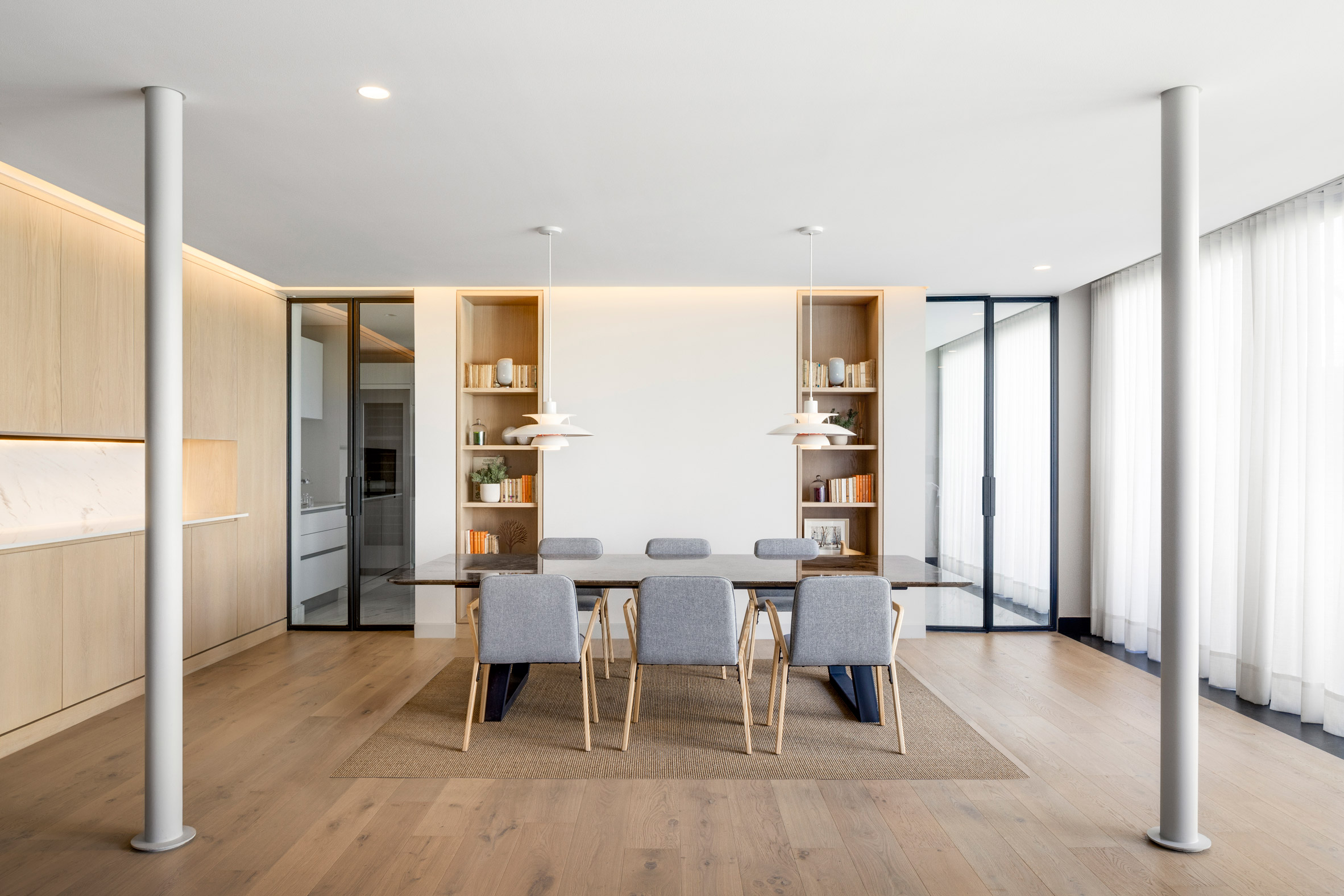 The open-plan living and dining area is furnished with white couches and natural wood side tables. Built-in oak cabinets are built around a fireplace in the living room and form a serving counter in the dining space.

Two glass doors on either side of the dining room wall provide access to the closed-off kitchen, which is fitted with sleek white cabinetry, stainless steel appliances and a wood island. 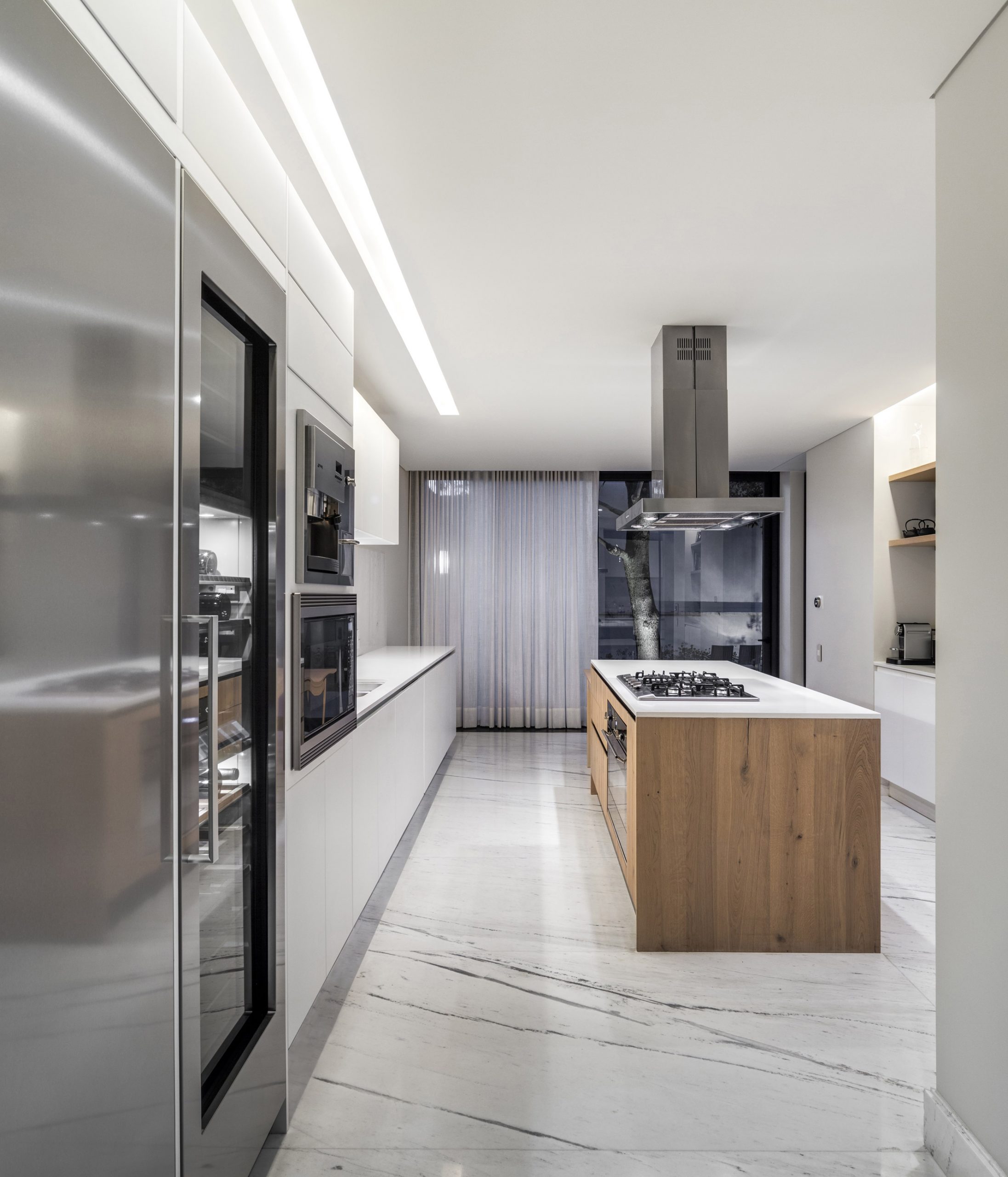 A library with black shelves is furnished with a black Eames-style chair and small countertop for storing and serving beverages.

Four bedrooms and another family room, situated at the stair landing, are located on the upper level with additional space for guests located on a subterranean basement floor. 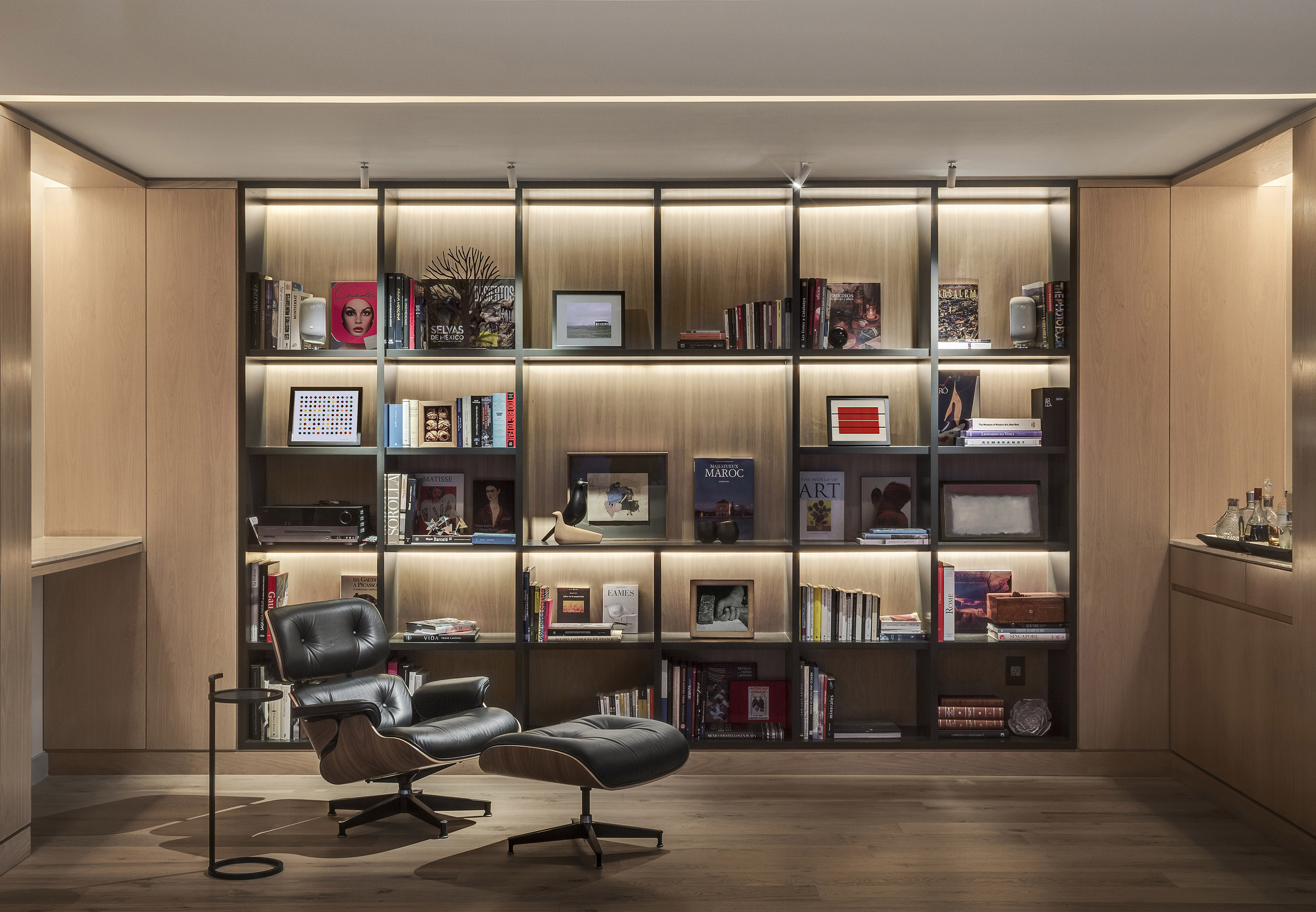 Spanish architecture firm Francesc Rifé Studio also designed a dark grey house in Mexico City with a facade that conceals it from the street.

Photography is by Rafael Gamos.