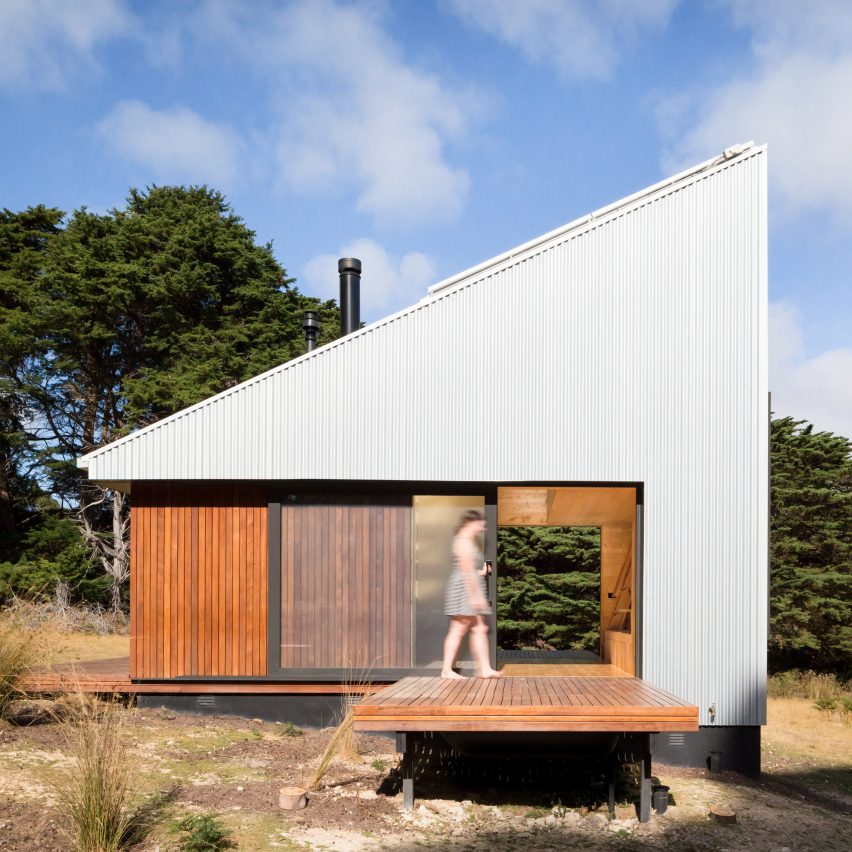 Apart from a mattress and a freestanding low table, every element in the cabin is part of the frame. 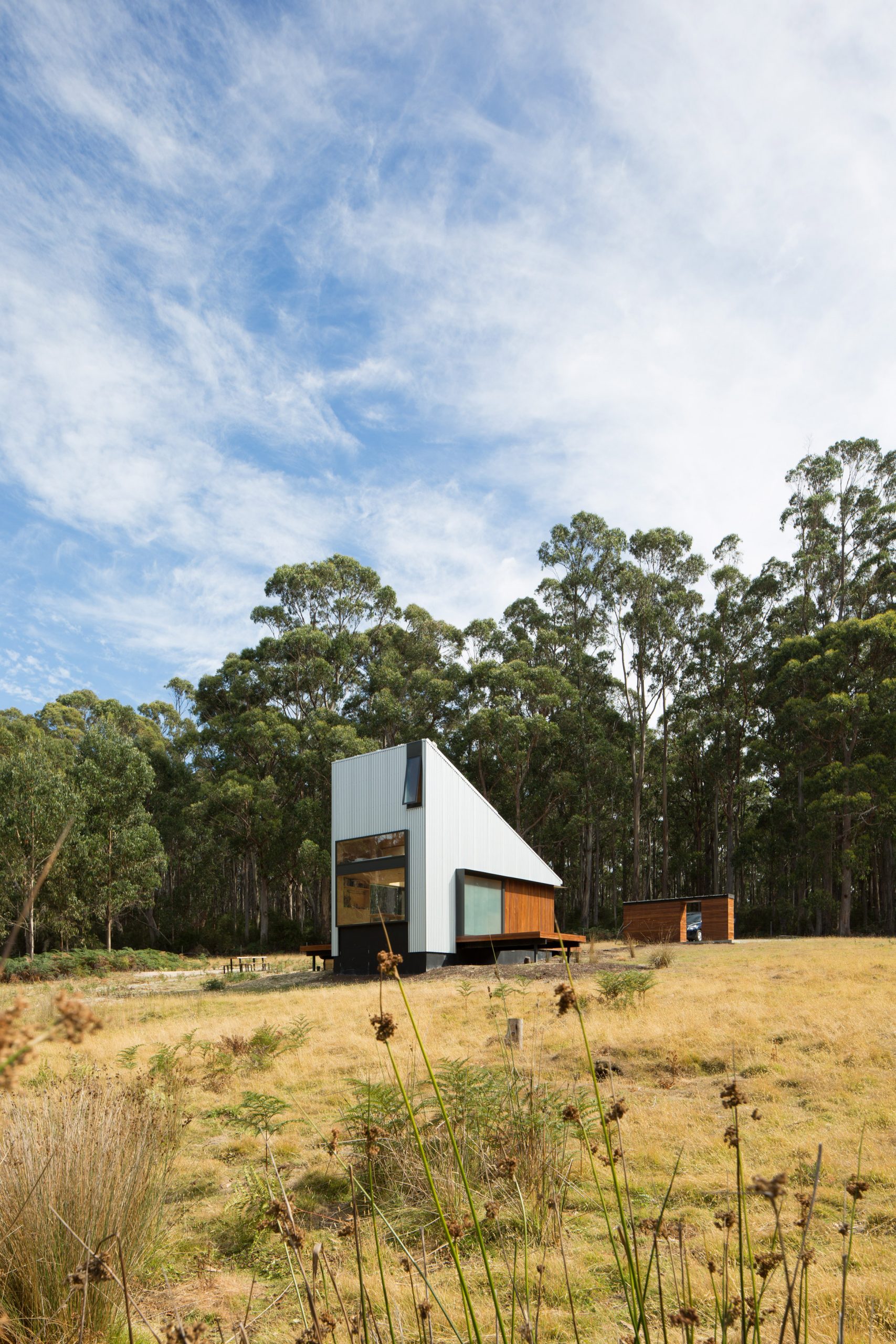 Maguire + Devin created Bruny Island Cabin for a client who wanted an off-grid retreat on 99 acres of land she owns on the Tasmanian island.

“Born in Taiwan, she spent her childhood in traditional Japanese houses,” explained the studio.

“Out of this grew a love for highly crafted minimalist design. Our brief was to capture that and design a building as a piece of furniture with everything she needs built-in.” 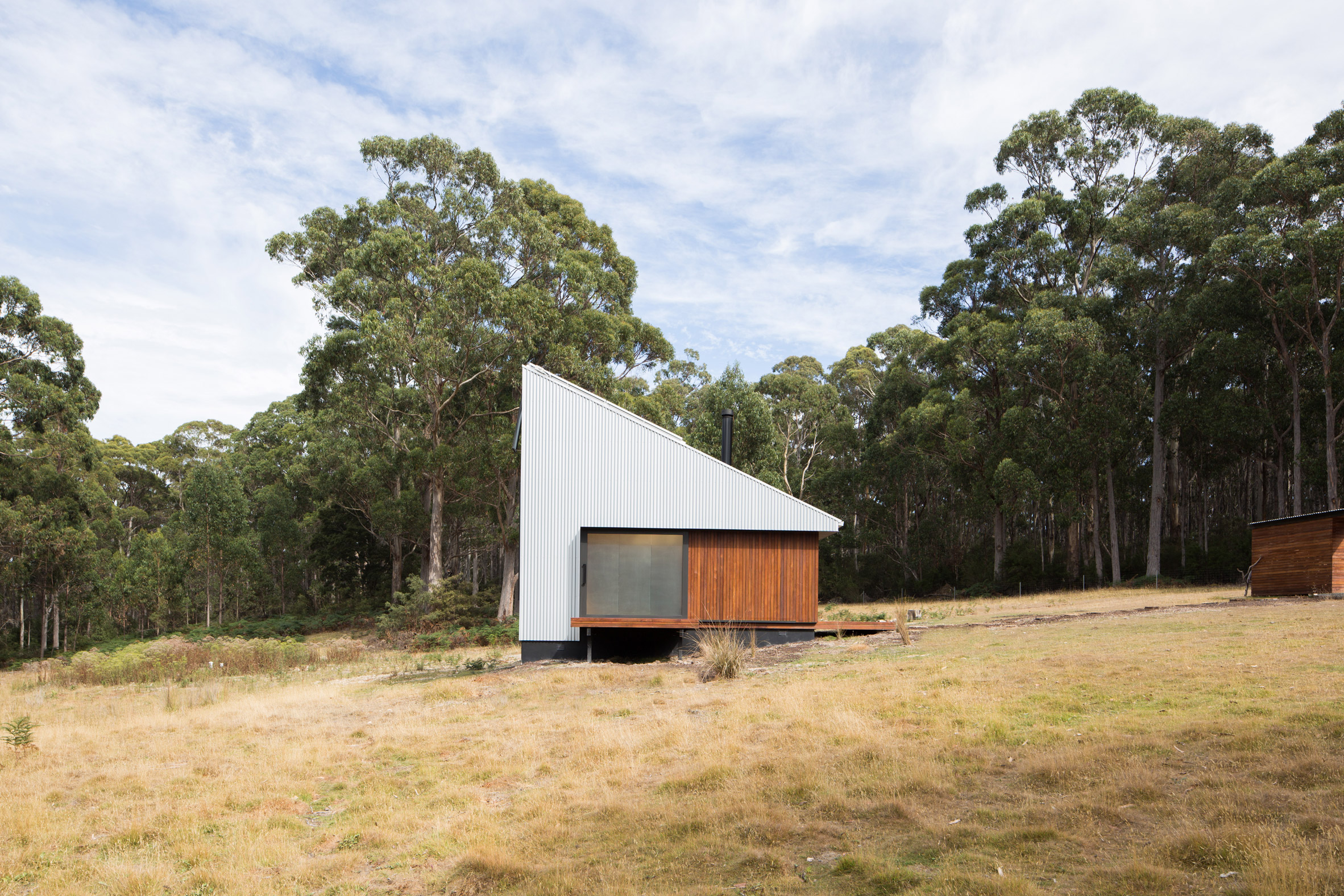 The cabin’s owner likes to read, play the violin and stargaze, so shelves and outdoor spots were prioritised in the design. 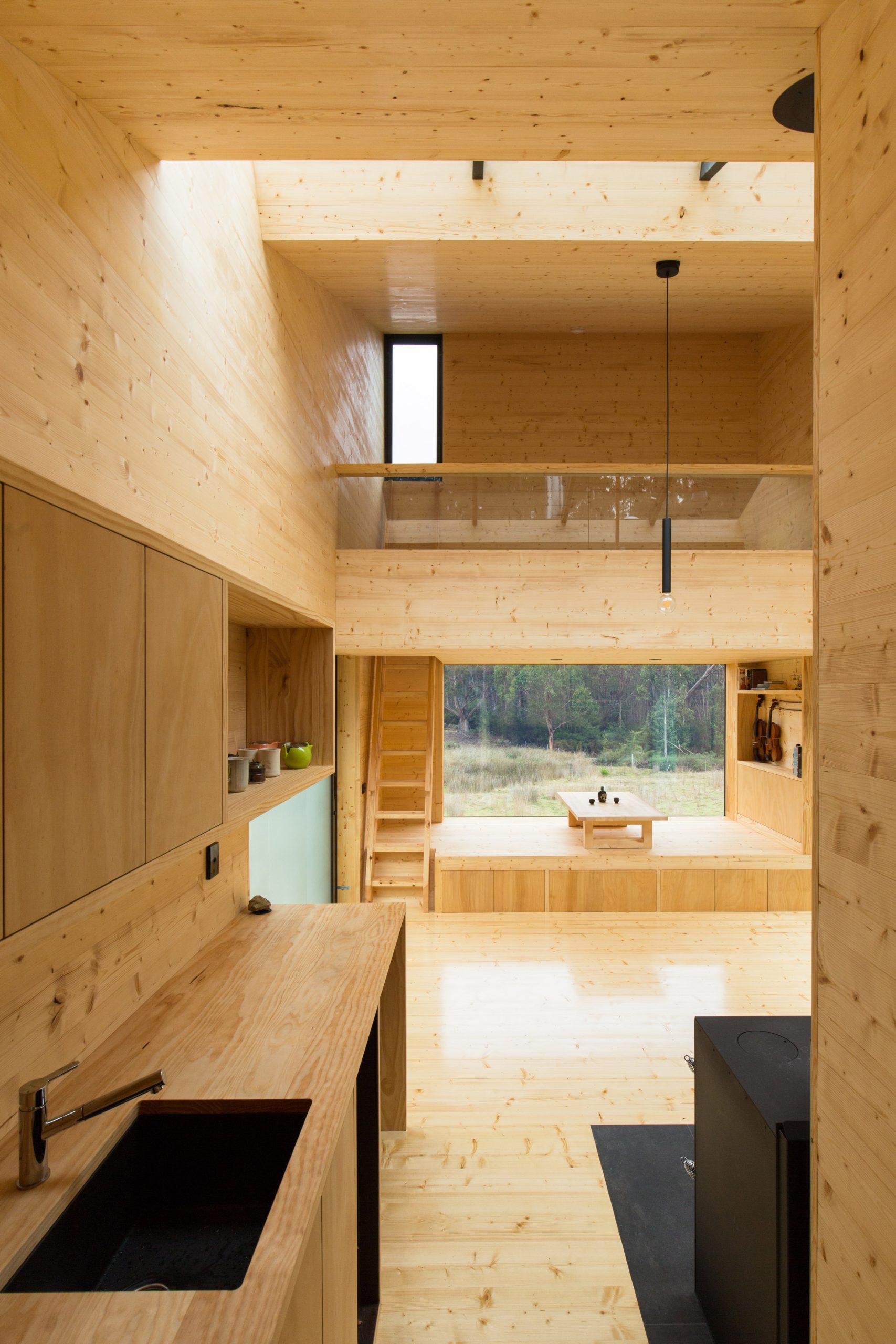 A wood-fired burner can be lit to provide warmth, and bottled gas heats water and powers the cooker.

Gas bottles and firewood are kept in a separate timber shelter further up the slope, which doubles as a privacy screen. 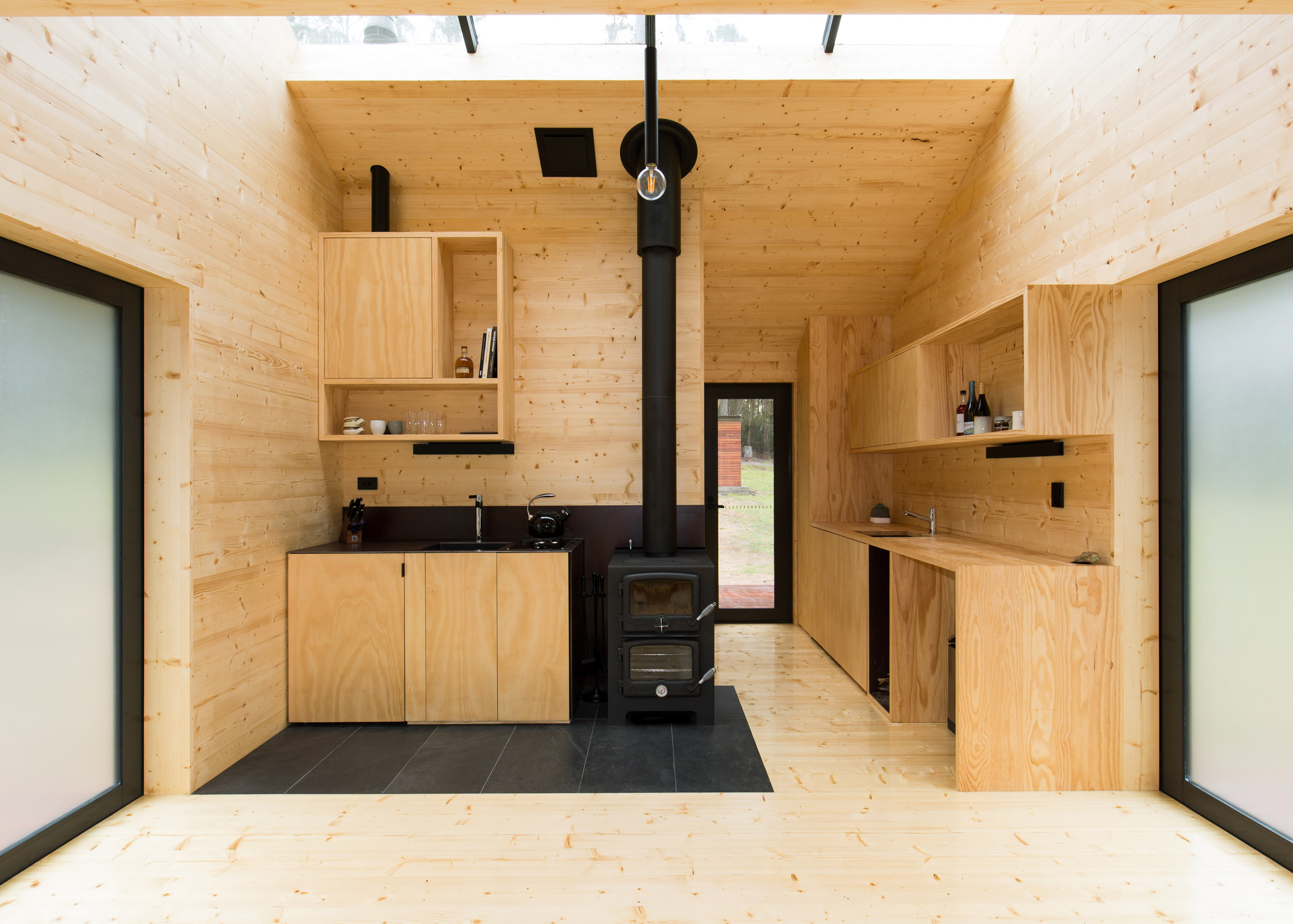 No windows face the dark tree line of the forest behind the house, and the roof is pitched to slope upwards and away towards the southern side of the site.

Most of the windows face south towards more open views. Skylights in the roof are angled to catch sunlight where it can reach over the trees. 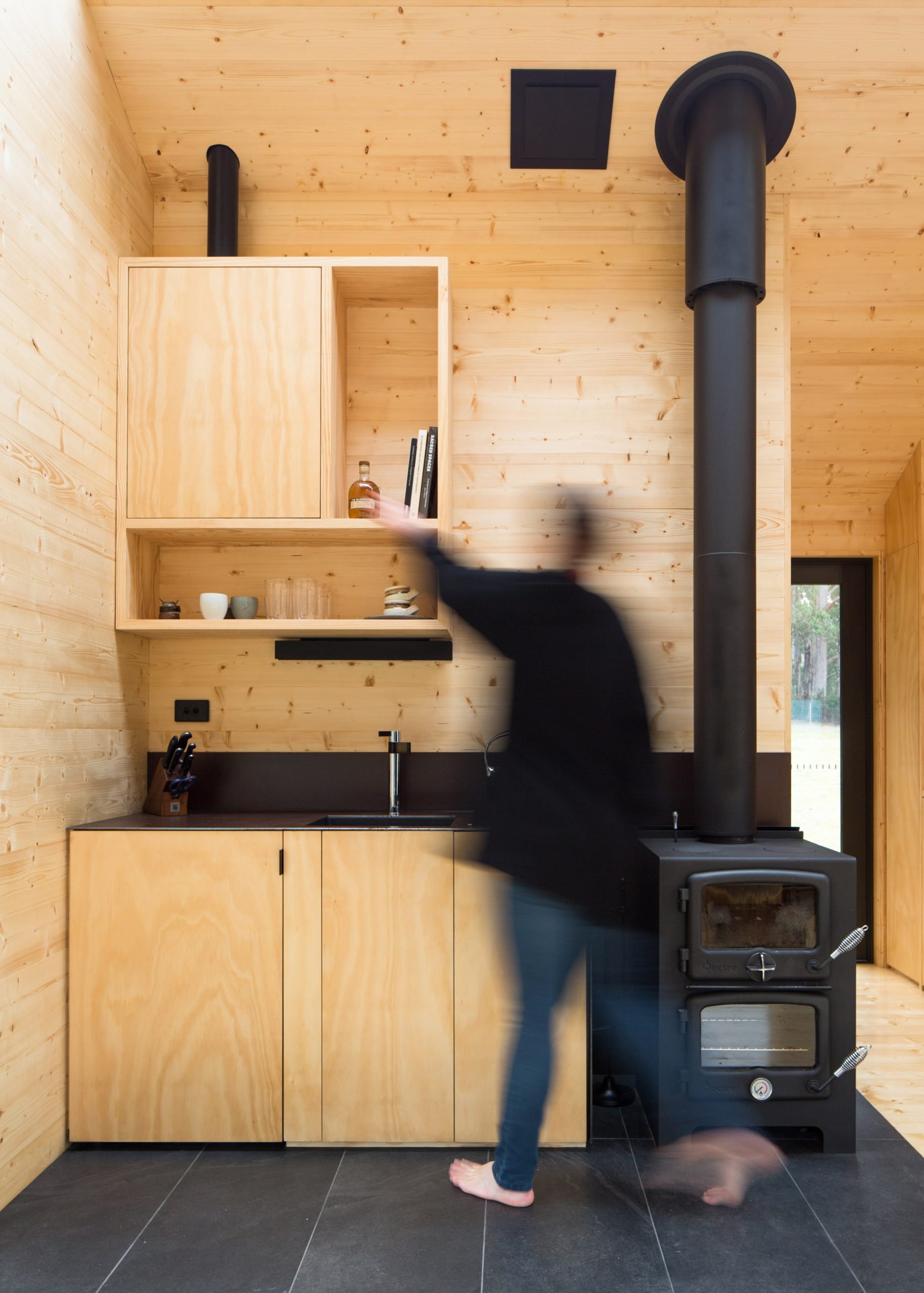 Bruny Island Cabin is flanked by two decks, one to the east and one to the west. They are used to enjoy the sunrise and sunset,  respectively.

The west deck has a sunken outdoor bathtub under removable decking panels. 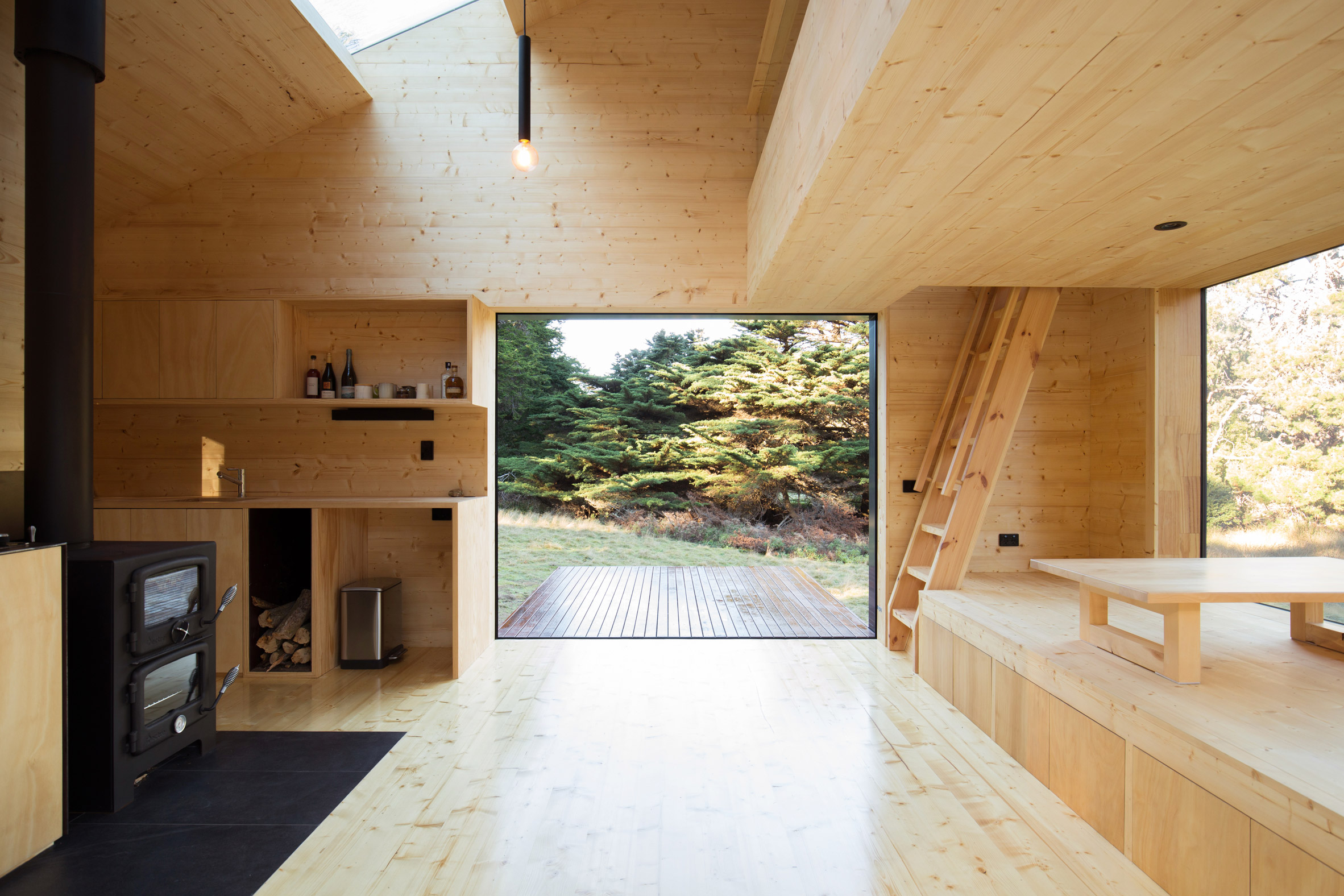 Both these decks can only be reached from inside the cabin. Sliding doors provide access and when both are pushed back they form one platform that runs through the cabin.

The decks are set low enough against the sloping site not to require a balustrade, and people can sit on the edge of the deck and look out over the landscape. 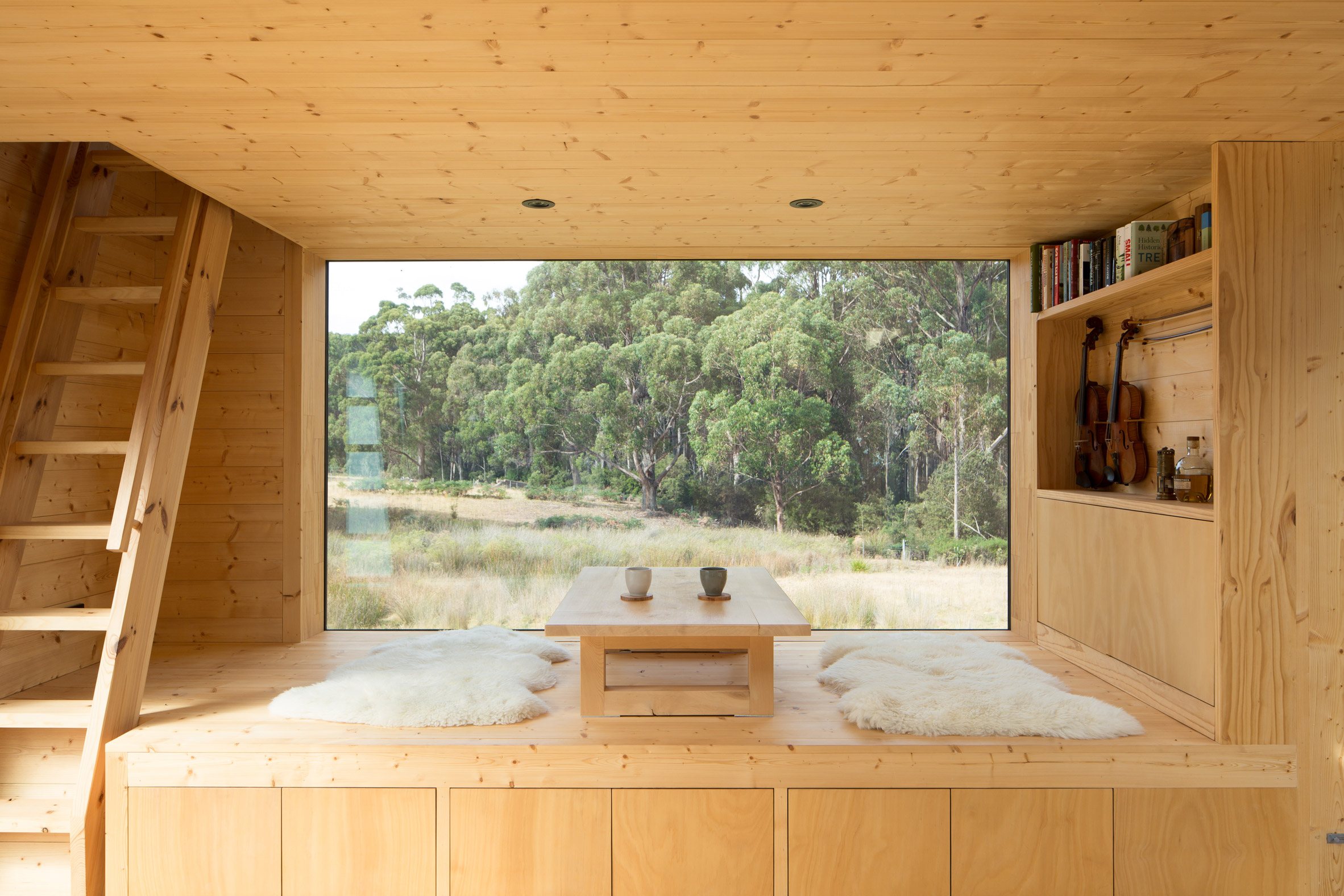 “They also prevent birds, including the endangered swift parrot, from attempting to fly through the building and striking the glass.” 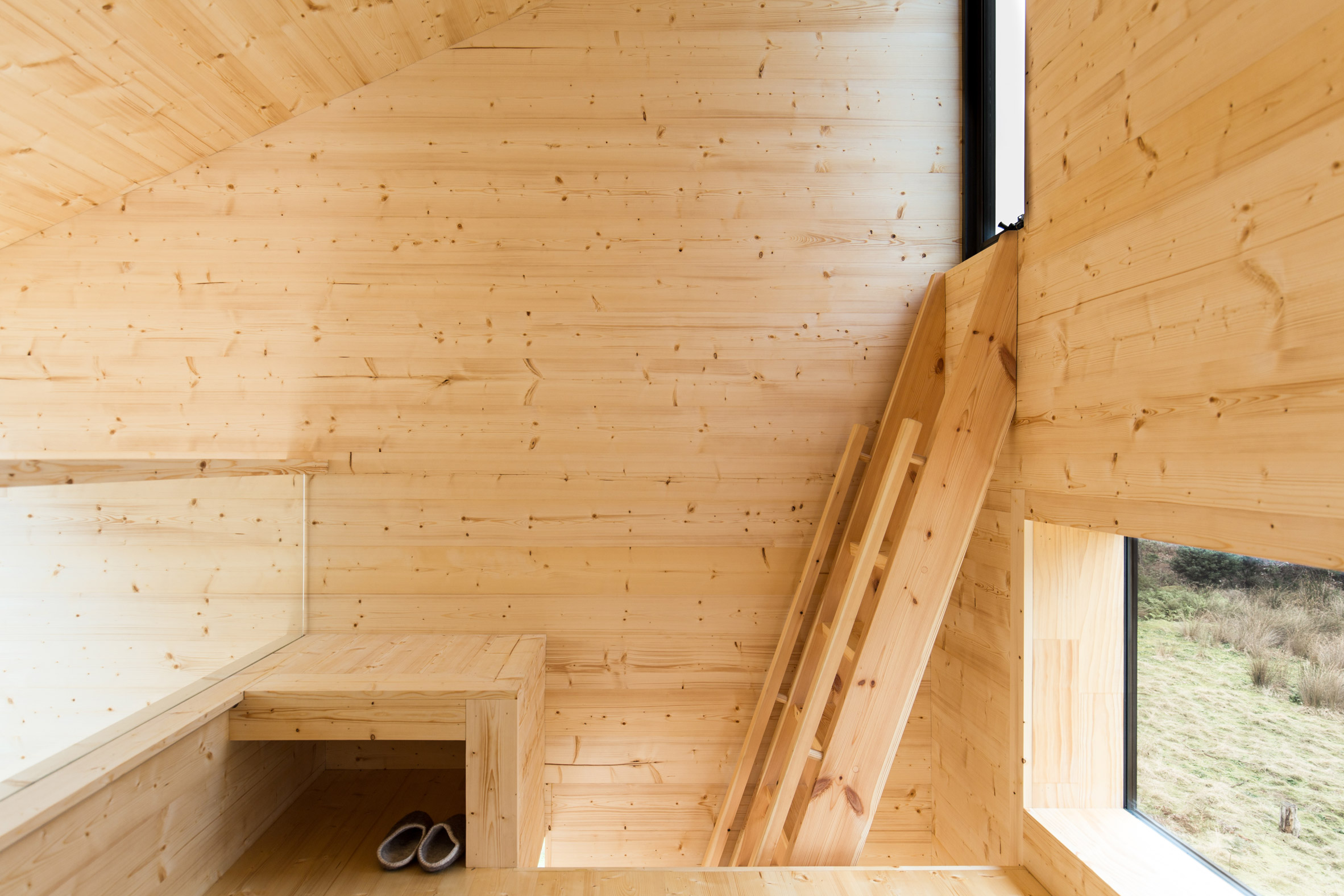 A secret door opens from the bathroom onto the entry deck, turning the shower into a semi-open-air bathing spot. It also lets the bathroom turn into a wetroom if people come back from a camping trip covered in mud.

Entering through the main front door, built-in cupboards and a countertop line the left-hand side. 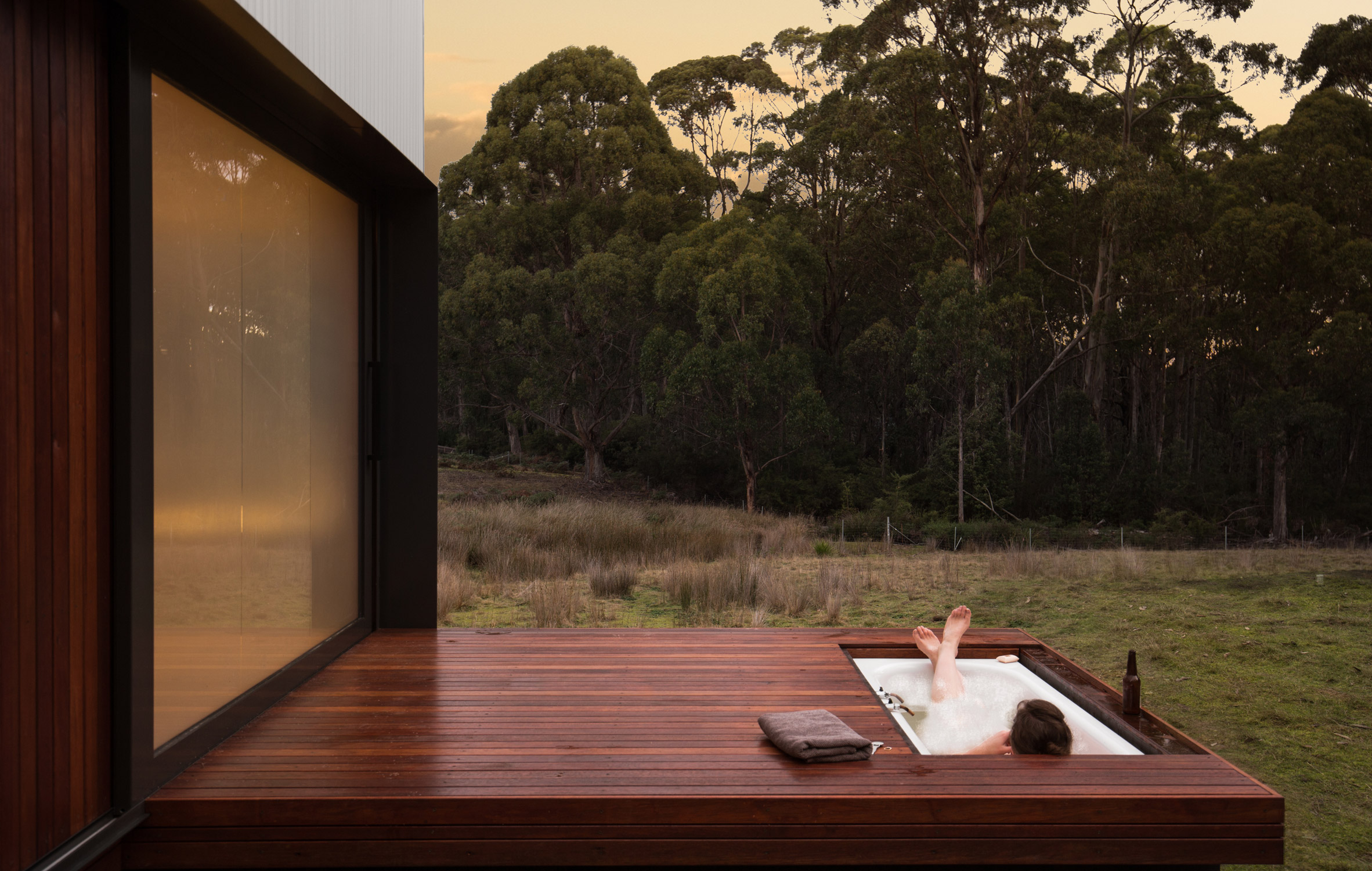 A compact kitchen sits against the back wall. The centre of the cabin is open space connecting the two outdoor decks.

Across the way, a raised platform holds the low-slung dining table. The floor around the stove is dark, but the rest of the cabin is clad in pale timber boards. The stove is a Nectre Bakers Oven and has an extra shelf below the fire for baking bread. 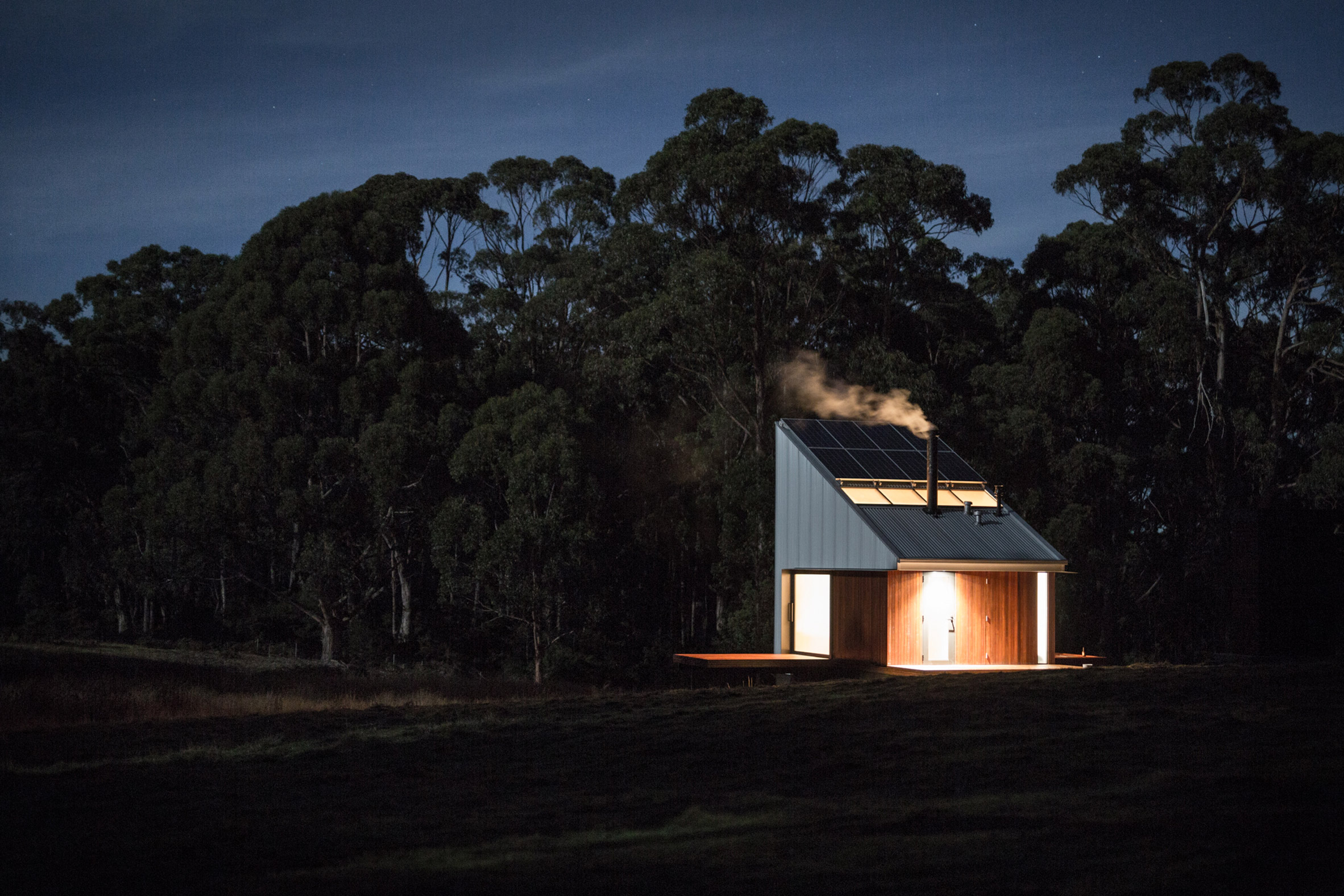 A ladder stair leads up to the loft bedroom, which is wide enough to fit a double mattress on the floor. A small built-in cubby provides a spot for personal items.

The exterior of the cabin is clad in panels of zincalume metal and bushfire-resistant timber to comply with local bushfire safety rules.

Maguire + Devin was founded by Hugh Maguire and Dan Devine and is based in Hobart, Tasmania.

John Wardle Architects has also worked on a house on Bruny Island. The studio’s restoration and extension of the historic Captain Kelly’s cottage was a Dezeen Awards 2018 winner.

Photography is by Rob Maver.