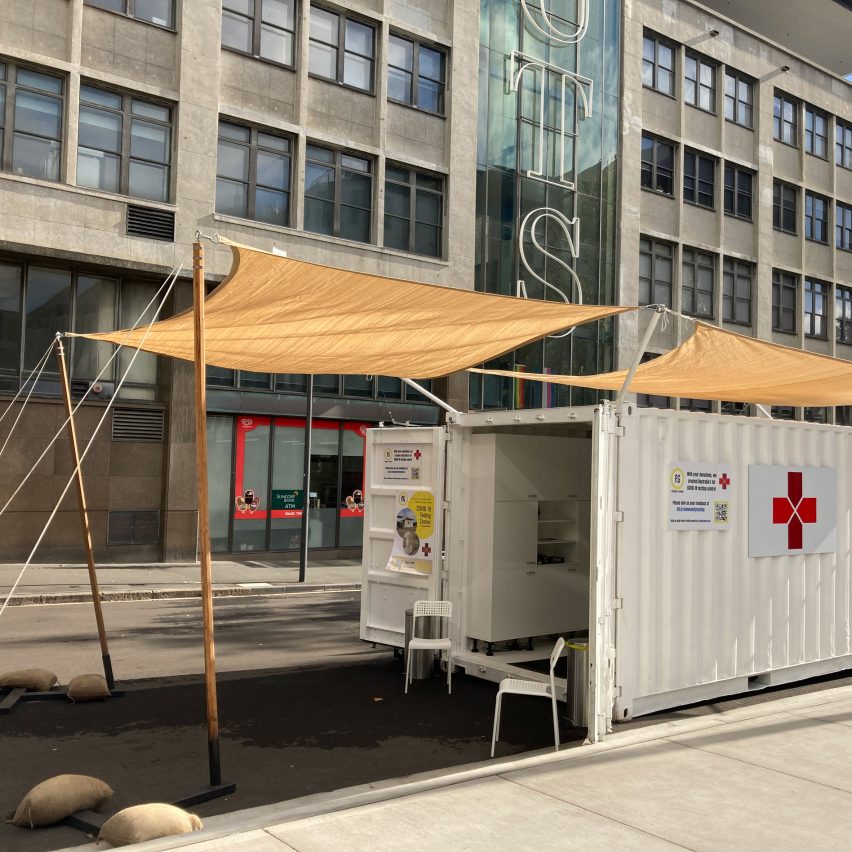 The University of Technology Sydney in Australia has built a drive-through coronavirus testing centre in a converted shipping container.

This fully functioning prototype has been trialled by Sonic Clinical Trials for nearly a month. Its designers claim it is the country’s “first purpose-built mobile Covid-19 testing centre”.

Deborah Ascher Barnstone, a professor at the University of Technology Sydney (UTS), and architect Robert Barnstone designed the testing centre as a low-cost medical facility that could be easily transported to less developed countries.

The container is designed to be a comfortable and sheltered place for medical staff to use instead of standing outside or under a thin tent. 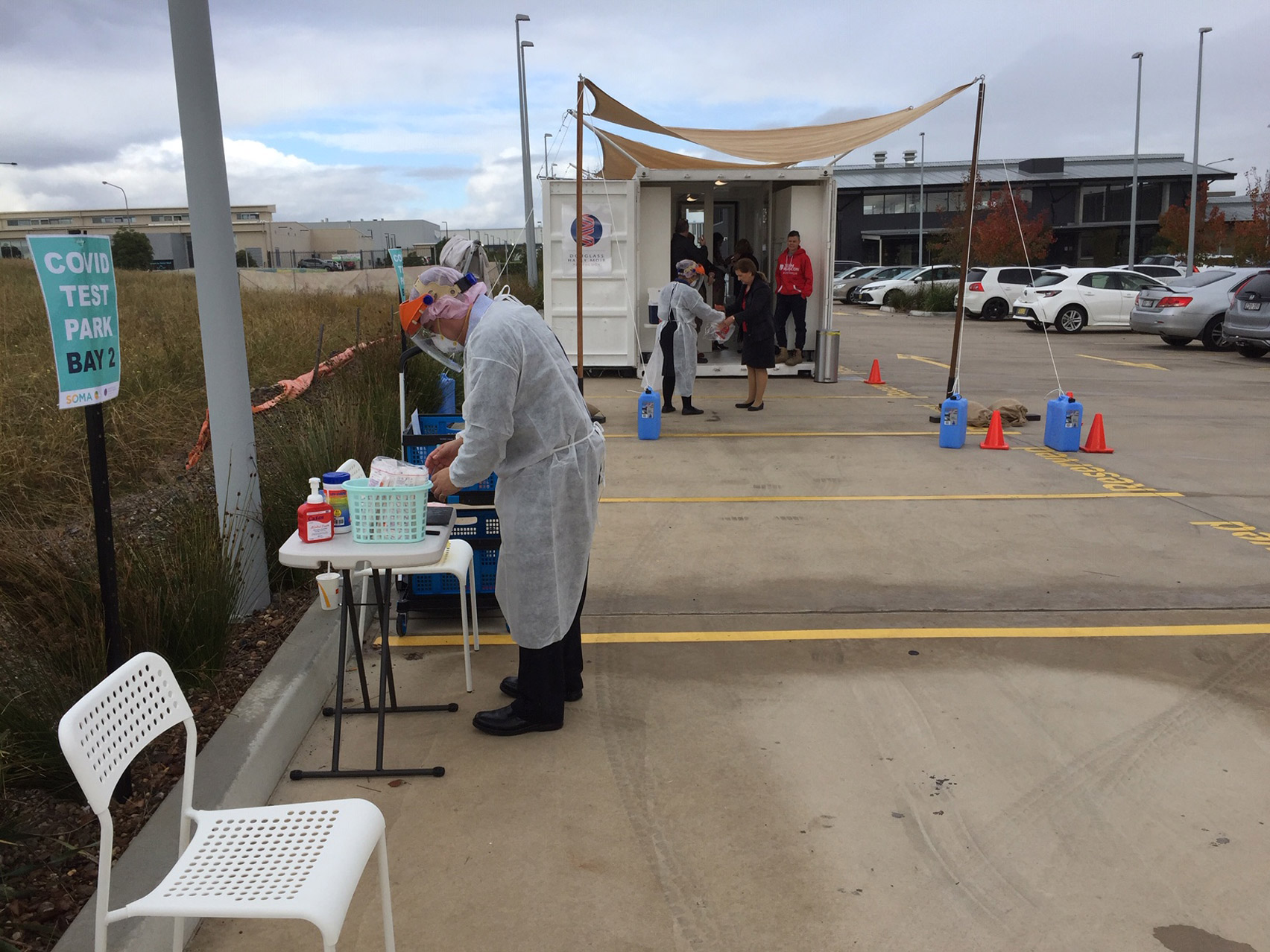 “However, the pandemic is just getting started in developing countries, which are likely to be some of the hardest hit by this disease,” she added.

“It’s vitally important we protect healthcare workers too, by making sure they can wash their hands, stay safe and stay warm over winter, or cool and sheltered over summer.” 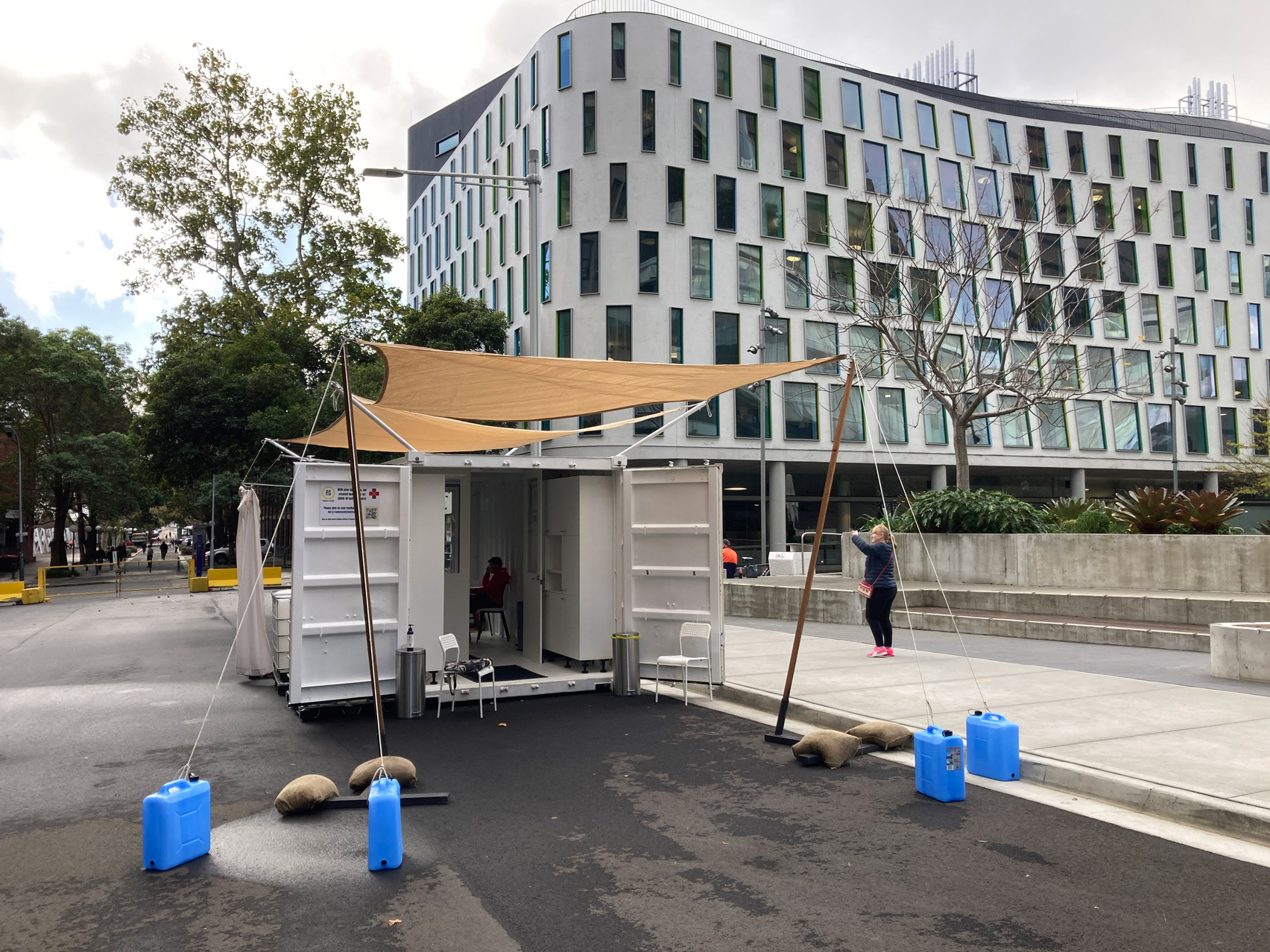 The tests themselves are conducted in the shade of a canopy in front of the container test centre. Inside there is an air-conditioned office space and field laboratory. Once taken and packaged, the samples are couriered to a laboratory for testing.

“People drive up, roll down their windows and are swabbed by medical personnel who remain outside,” Barnstone told Dezeen. 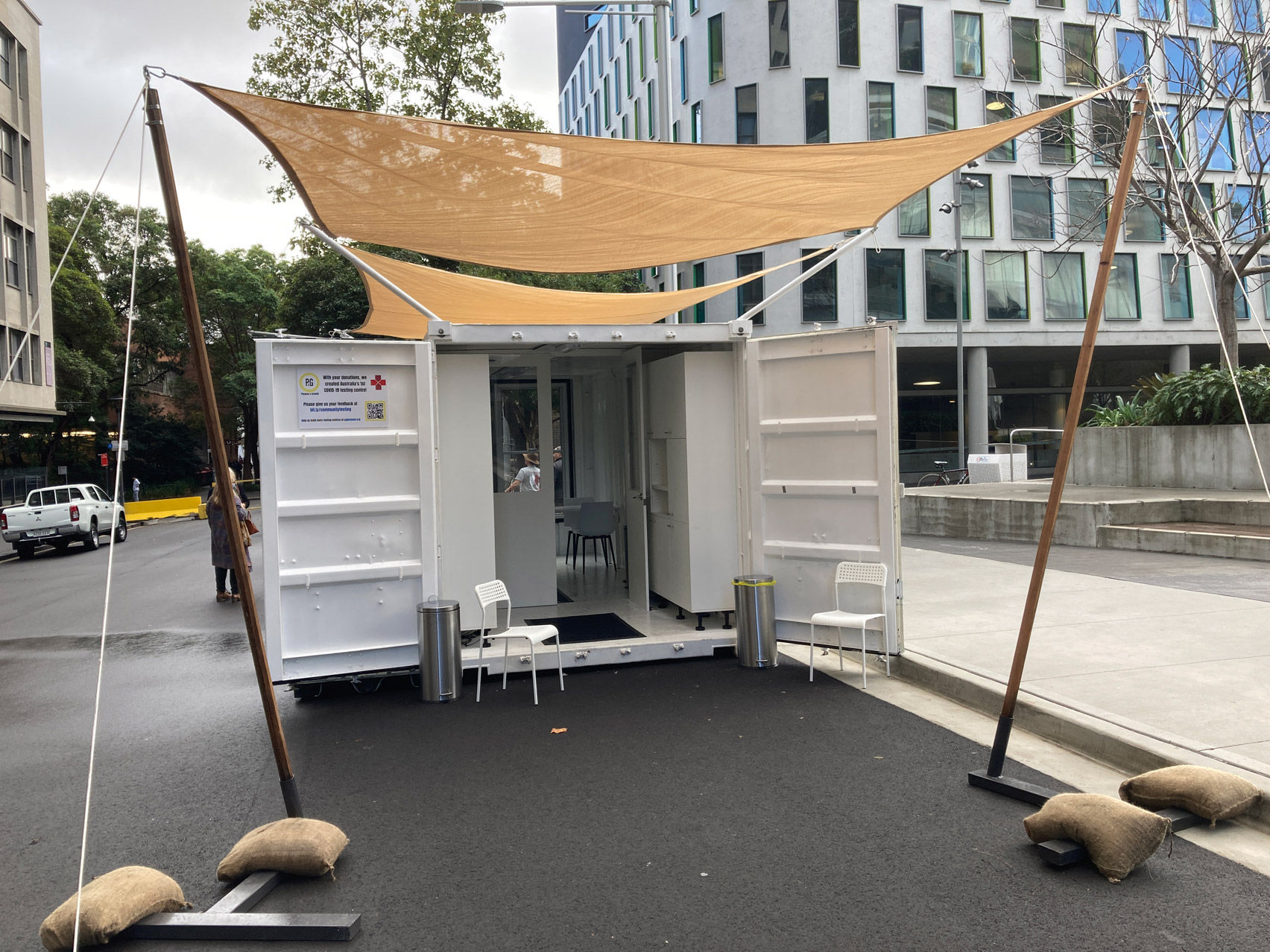 To maintain social distancing, only two members of staff are allowed inside the container at one time. A door separates the patient-facing side from the private side of the centre.

“The changing space for personal protective equipment (PPE) is on the exterior in order to protect medical staff,” said Burnstone. “It is a ‘room’ formed when the curtain is drawn, so contamination is never allowed on the interior.”

Converting the 20-foot container involved adding a window opening reinforced with steel. The floor and built-in cupboards are made from MDF and melamine.

A stainless steel sink allows staff to wash their hands properly, with water stored in two recycled tanks that were originally used to hold soybean oil.

As well as an air-conditioning unit, there’s a heater and an electricity generator. All the electrical wires are hidden in the ceiling behind aluminium composite panels. The exterior was painted with epoxy to create a uniform white and tidy appearance. Wooden and steel struts support the canopy at the front, which is made from cloth. 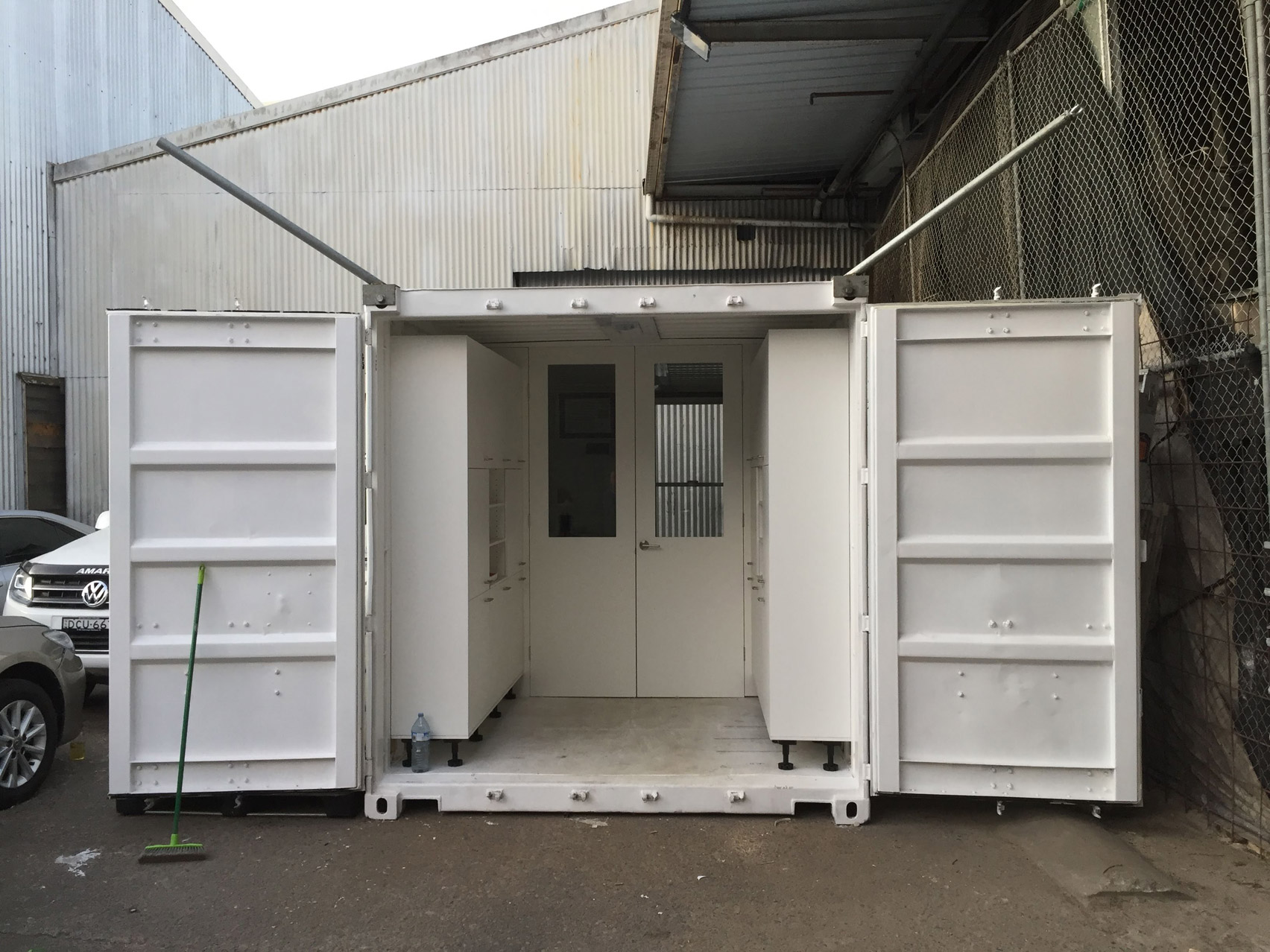 The conversion was undertaken with the help of refugees to Australia employed by social enterprise P&G Initiatives.

There are plans to take ship this particular centre to Canberra, said Barnstone, and the UTS team is in talks with an NGO in Papua New Guinea that is interested in using the design for a mobile medical clinic.

Testing company Sonic Clinical Trials is interested in commissioning some more, and the team has started prototyping another conversion project. 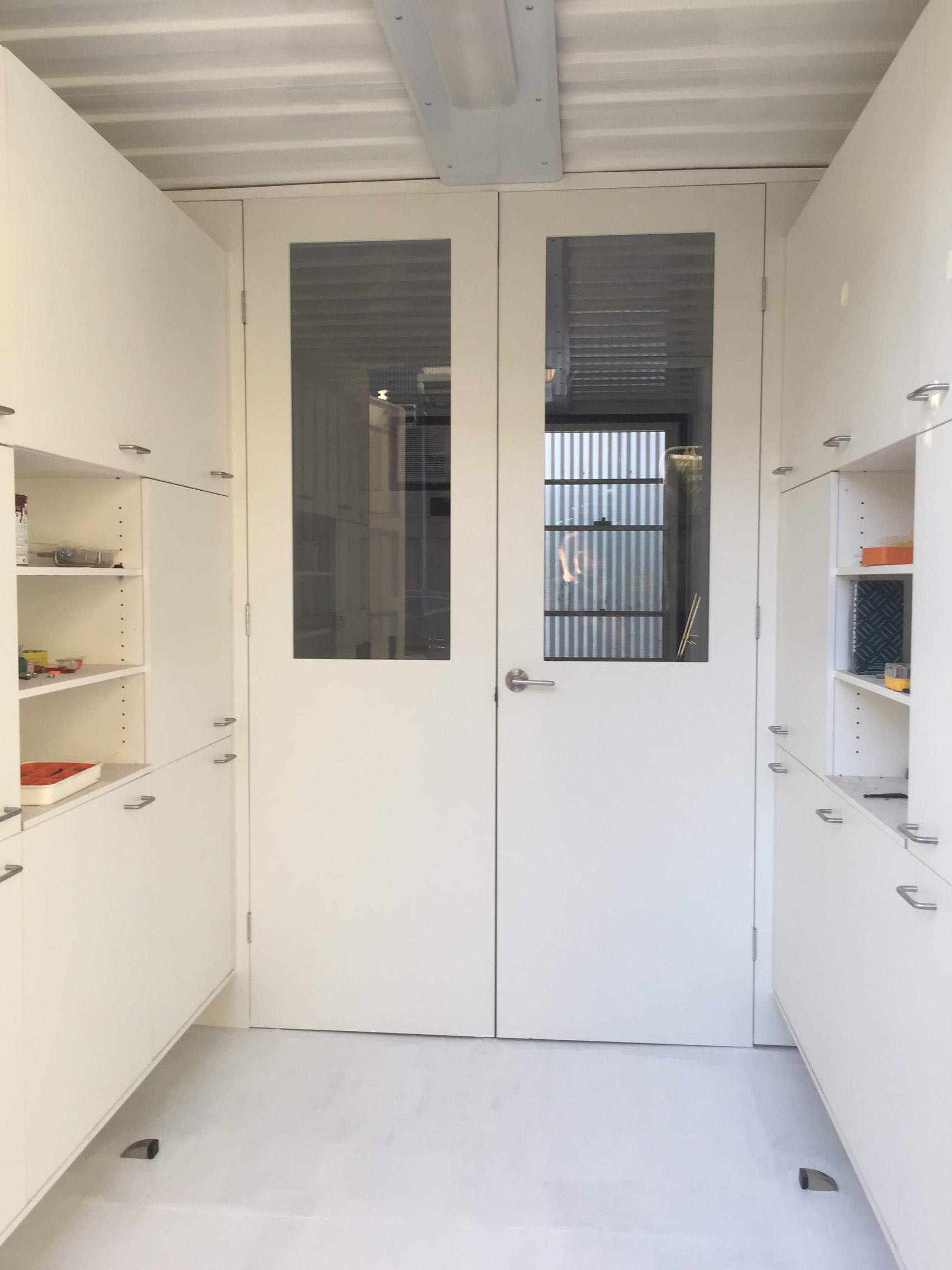 “We are experimenting with a slightly different design using a re-purposed refrigerator truck instead of a shipping container,” said Barnstone.

“The refrigerator truck already has electricity and cooling, would not need to be loaded and unloaded at every site and has an elevator at the rear, which would make it wheelchair accessible.”

Architects have been investigating the possibility of using shipping containers to combat coronavirus since the pandemic began.

Architecture studio Grimshaw has designed a range of testing facilities that could be built in converted shipping containers, while Waugh Thistleton Architects proposed using them to make mobile vaccination units once a vaccine has been found.

In Italy, Carlo Ratti and Italo Rota installed a two-bed intensive care unit inside a shipping container at a hospital in Turin.