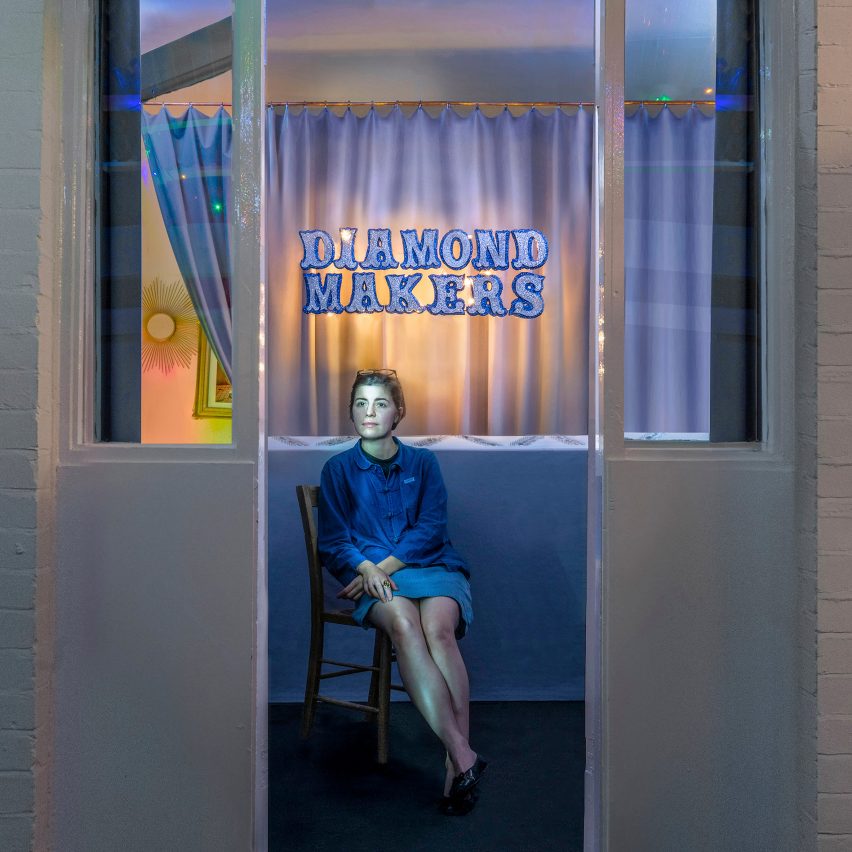 London College of Fashion graduate Aniela Fidler questions the role of emotion in economic value with her conceptual Diamond Makers Lab, which would make diamonds from meaningful objects such as Notre Dame ash or a mother’s cake.

Described by the designer as a “hybrid between a lab and a tailor-made retail experience” the workshop would be used to fabricate lab-grown diamonds from any object that is able to burn to ash.

Fidler wanted to use her project to discover what other meanings could be represented by diamonds – in addition to the typical associations of rarity and luxury – and to encourage consumers to question the commodity’s role and value in society. 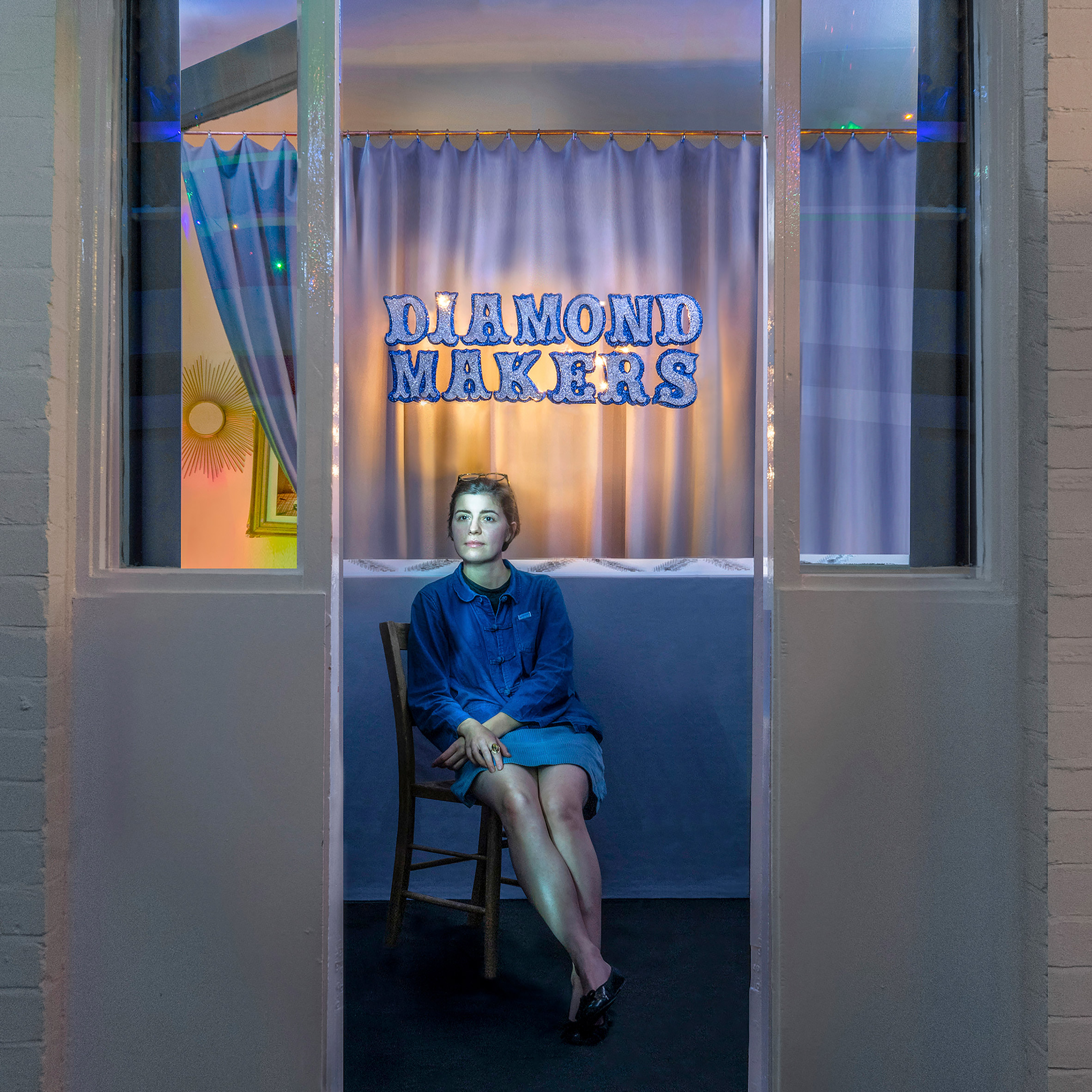 “I established Diamond Makers lab with the intention to create the most valuable diamond in the world, but instead discovered that diamonds are ‘whatever’ not ‘forever’, as the famous slogan states,” said the graduate, who studied MA Fashion Futures at the London College of Fashion.

“Traditionally, the marketing tactic of diamonds associates love with a rare luxury. I found this story equally fascinating and disturbing,” she continued.

“If love is like a diamond – rare, for many unmaintainable without a sacrifice, and can be measured and validated with money – where does this leave us? How does this way of capitalising on emotion make us behave?” 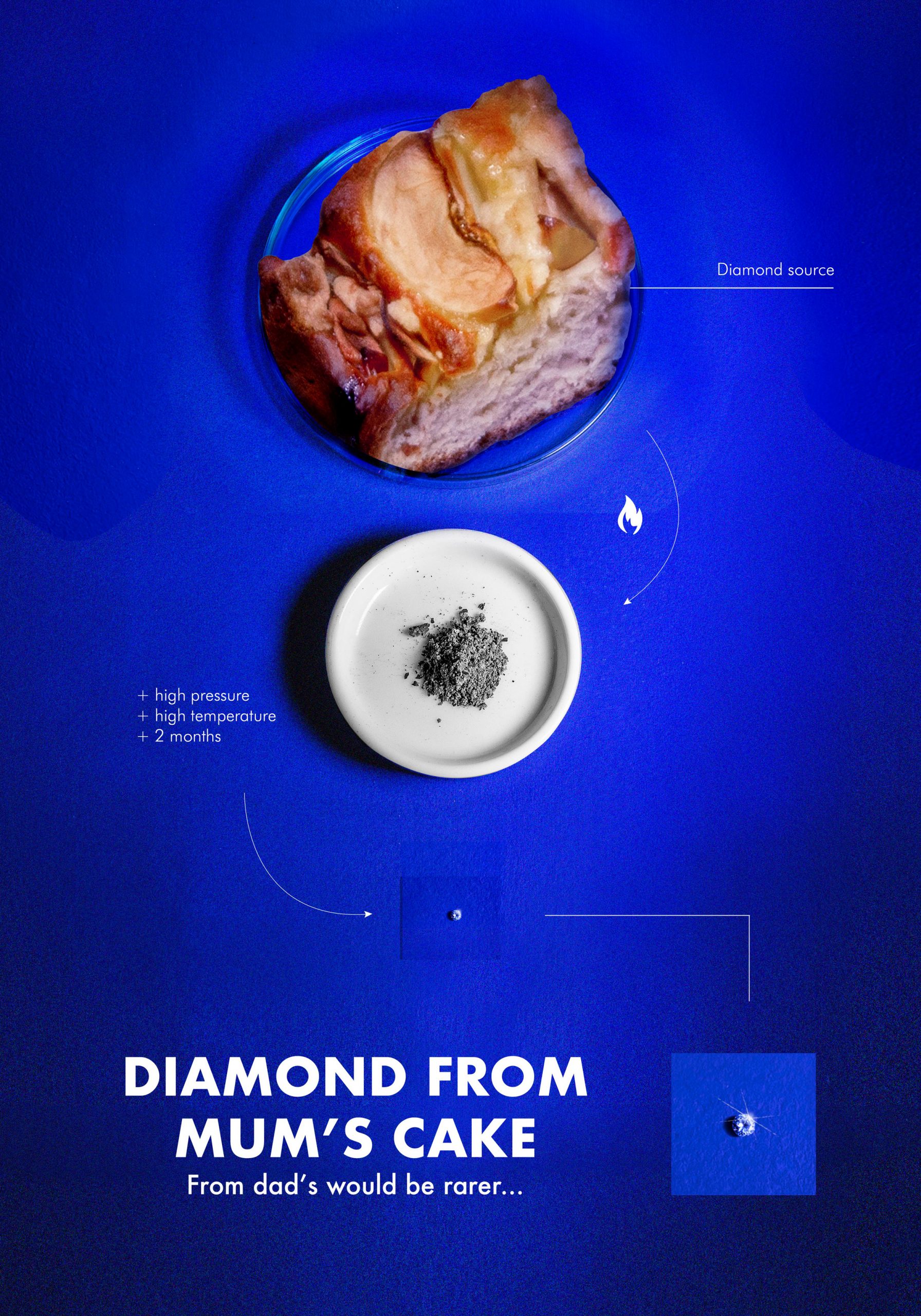 Fidler wanted to reposition the perception of diamonds – which she considers to be a result of “mischievous marketing” – to being associated with objects that are dear to the owner for a personal reason.

“Diamonds are a symbol of love because we came to believe that real love is rare, pure and forever like a diamond,” she said.

“This connection was the basis of one of the most significant cultural engineering operations of the 20th century,” she added.

“It employed wives-to-be and prospective husbands, writers, artists, celebrities and public figures across all the media and beyond to influence how we express one of the most powerful human feelings.”

However, ironically, says Fidler, if all consumers were aware of the reality of diamond mining then they would “have a hard time comparing them to love”.

“The connection between diamonds extracted directly from the earth and love wouldn’t be possible if we recognised its dark colonial history, the disastrous consequences of mining and its common geological occurrence.”

“So what could make a diamond truly valuable if its mainstream story is a fallacy?” 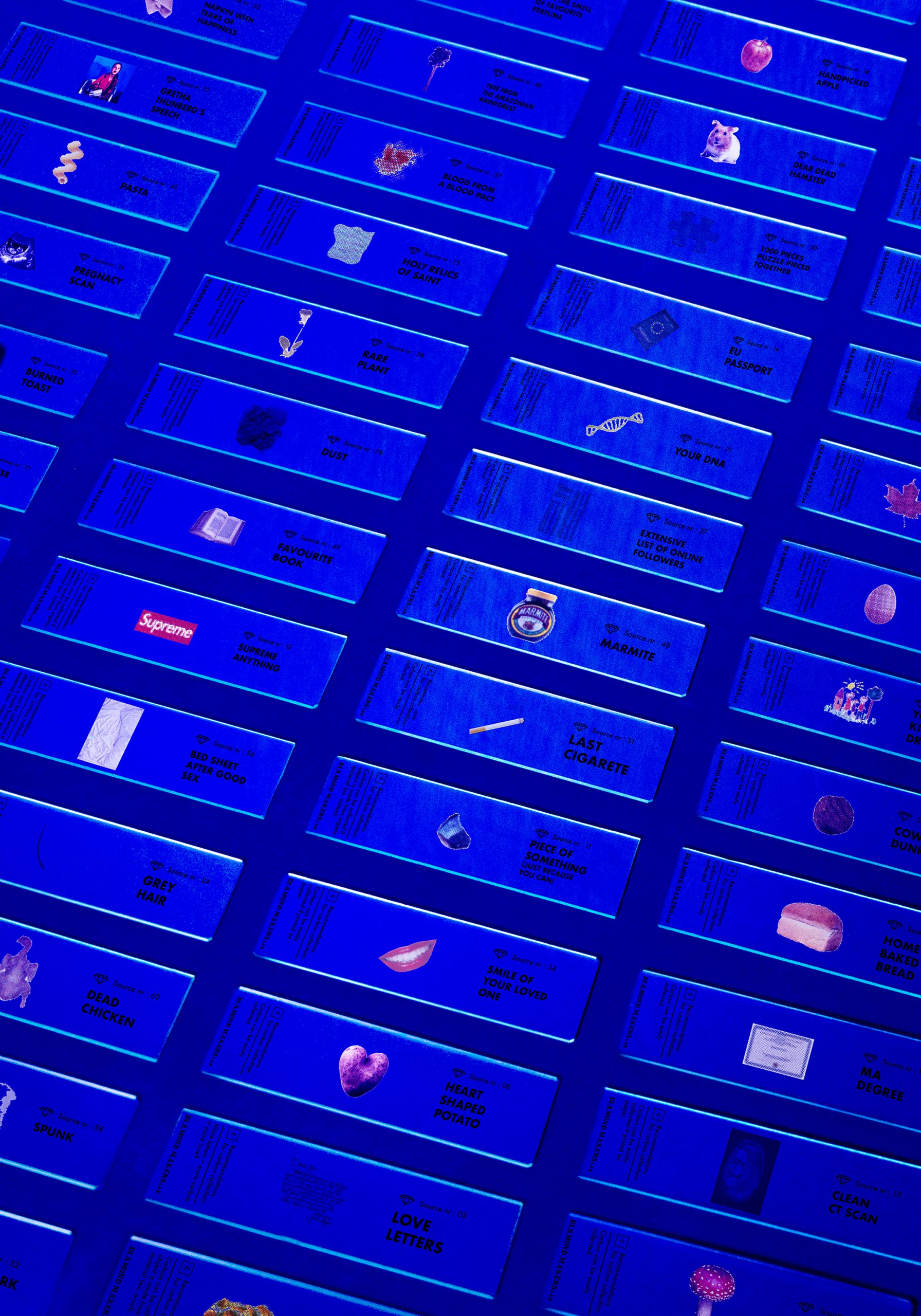 She conducted a survey where she identified 100 items that participants care about and would consider turning into a diamond.

These included ordinary objects from a cigarette or a favourite book to a jar of Marmite or pasta, to more abstract belongings such as a bedsheet “after good sex” or ash from the Notre Dame fire.

The designer is currently working with a diamond laboratory in Saint Petersburg, Russia, where a diamond is being produced from a cake made by her mother. The process, however, has been on hold due to the coronavirus pandemic.

Lab-grown diamonds are created by placing ash under high temperature and pressure, in a process that simulates how gemstones would naturally form from the carbon in the earth’s core.

However, as Fidler explains, the technology is only really being used to create cremation diamonds from human ashes. She wants to extend this use to other objects. 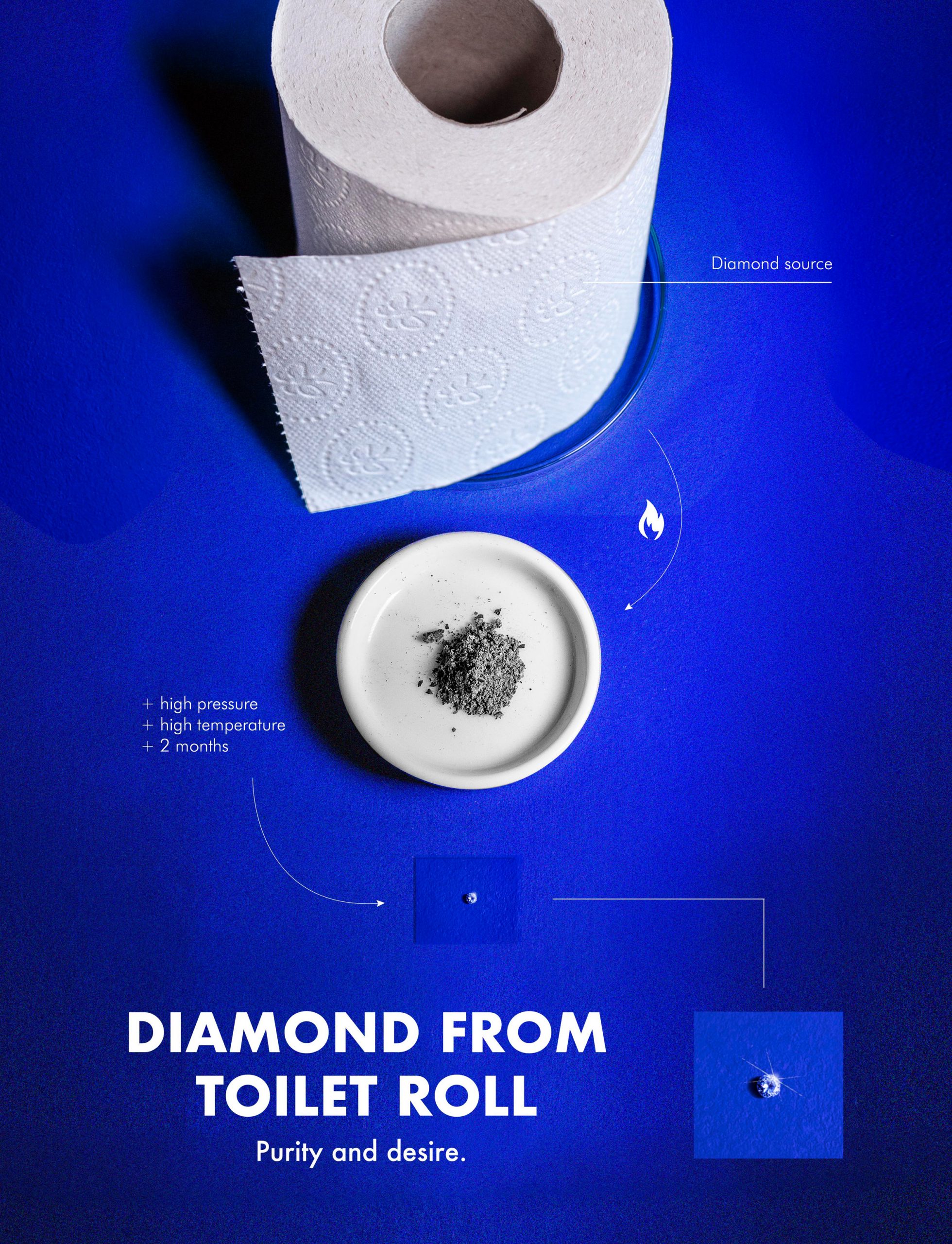 The required carbon would be isolated from the ashes, then purified under heat in an oxygen-free setting, with the addition of inert gas. This reduces the ash to carbonates, and carbonates to graphite – the elemental form of carbon.

The graphite powder, enhanced with additional purified carbon to ensure high quality, and a diamond seed – what Fidler describes as the foundation of a diamond’s molecular structure – are placed in a “growth cell” of a high-pressure high-temperature (HPHT) machine. Then the formation process begins.

It takes around two to three months to grow the diamond, dependent on desired size and colour. Once grown, the diamond is removed from the cell and cut into the size and carat requested. 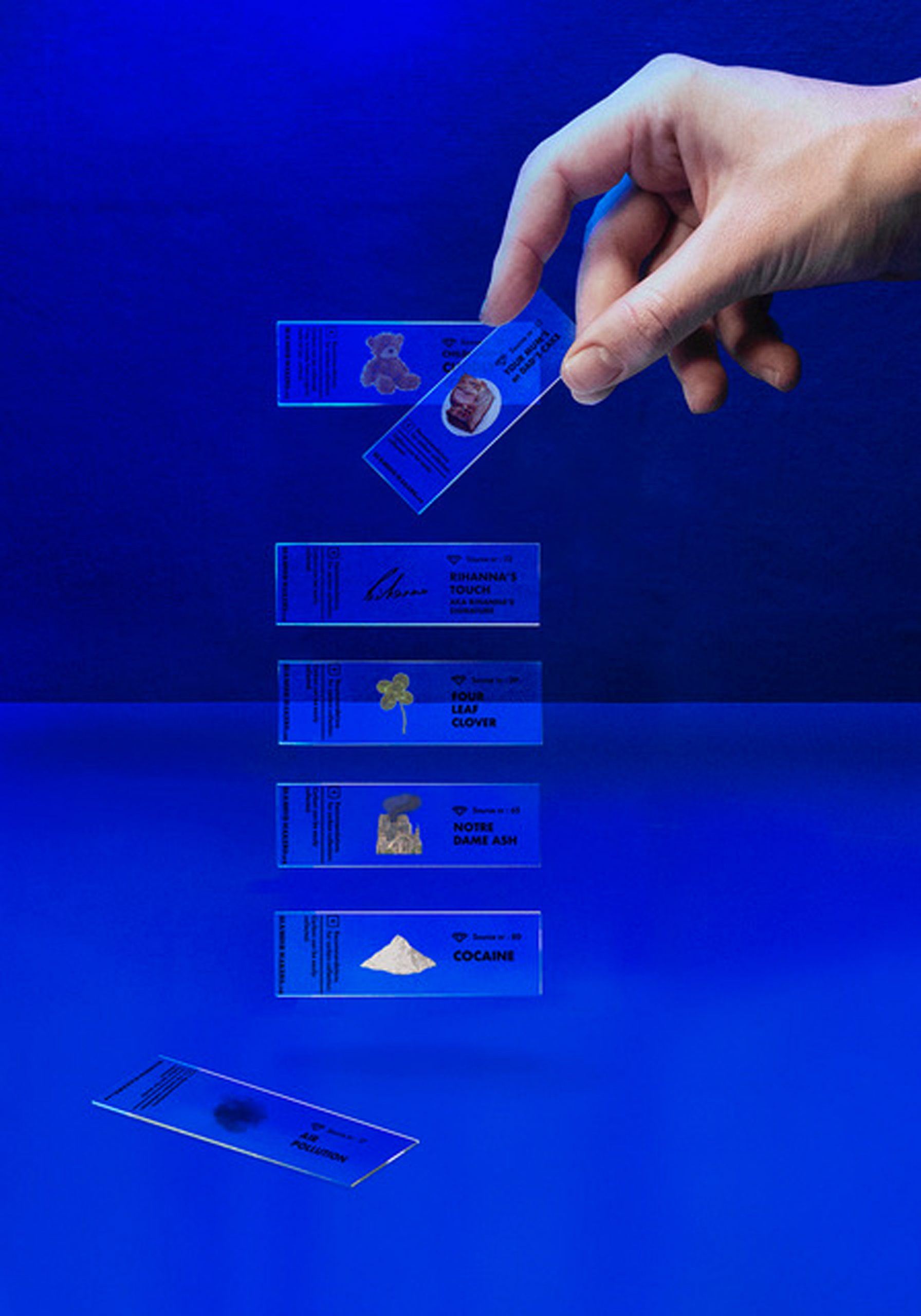 “I would argue that a diamond itself is less significant than the meaning that can emerge from its creation process,” said the designer.

“In fact, adjustment of the carbon source and the narrative associated with it can impact or even change a diamond’s value entirely.”

Fidler is currently testing a workshop and developing a Diamond Makers popular-science game, which aims to help players discover their perfect diamond source, and identify and revise misleading marketing mechanisms.

The all-diamond ring designed by Jony Ive and Marc Newson was also grown in a lab by US leading producers the Diamond Foundry.

The ring, which was carved from a single enormous diamond, was auctioned at Sotheby’s in December 2018 where it was purchased by an anonymous buyer for US$256,250.