A blue-tiled pool features in the courtyard of Villa Stardust, a live-work house built in a former commercial building in Rotterdam by Dutch architecture firm MVRDV.

To design the home MVRDV took cues from riads – traditional Moroccan buildings that are arranged around a garden courtyard. The home for a family of five was built on two sides of the courtyard, while the owner’s medical practice occupies the other two sides. 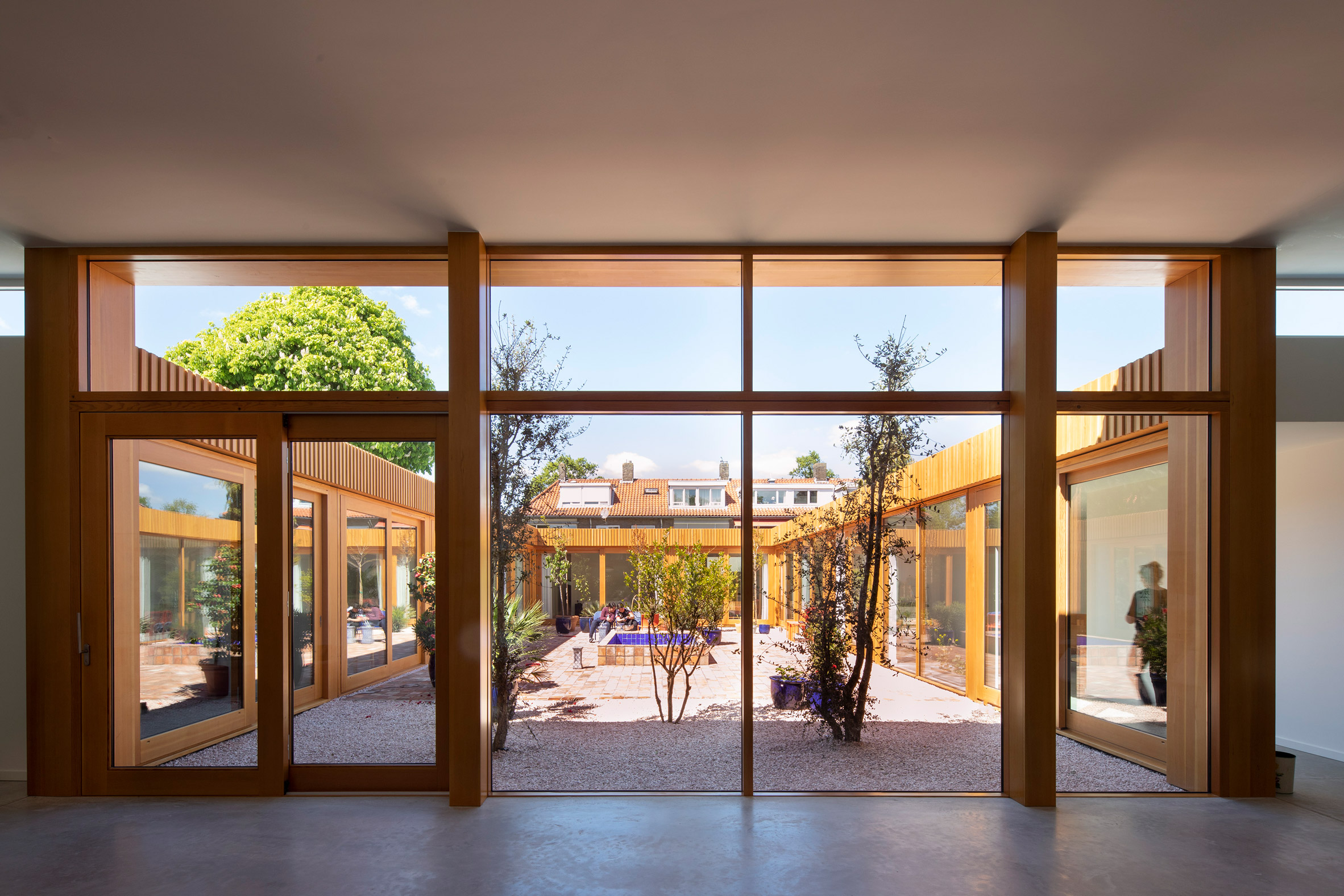 The courtyard gives the house an outdoor space and brings light into the deep footprint of a building originally built for commercial rather than residential use.

“The residents asked us to design the villa after they had already bought the building,” said co-founder of MVRDV Nathalie de Vries. “I think it’s very clever that, as non-architects, they understood its potential.” 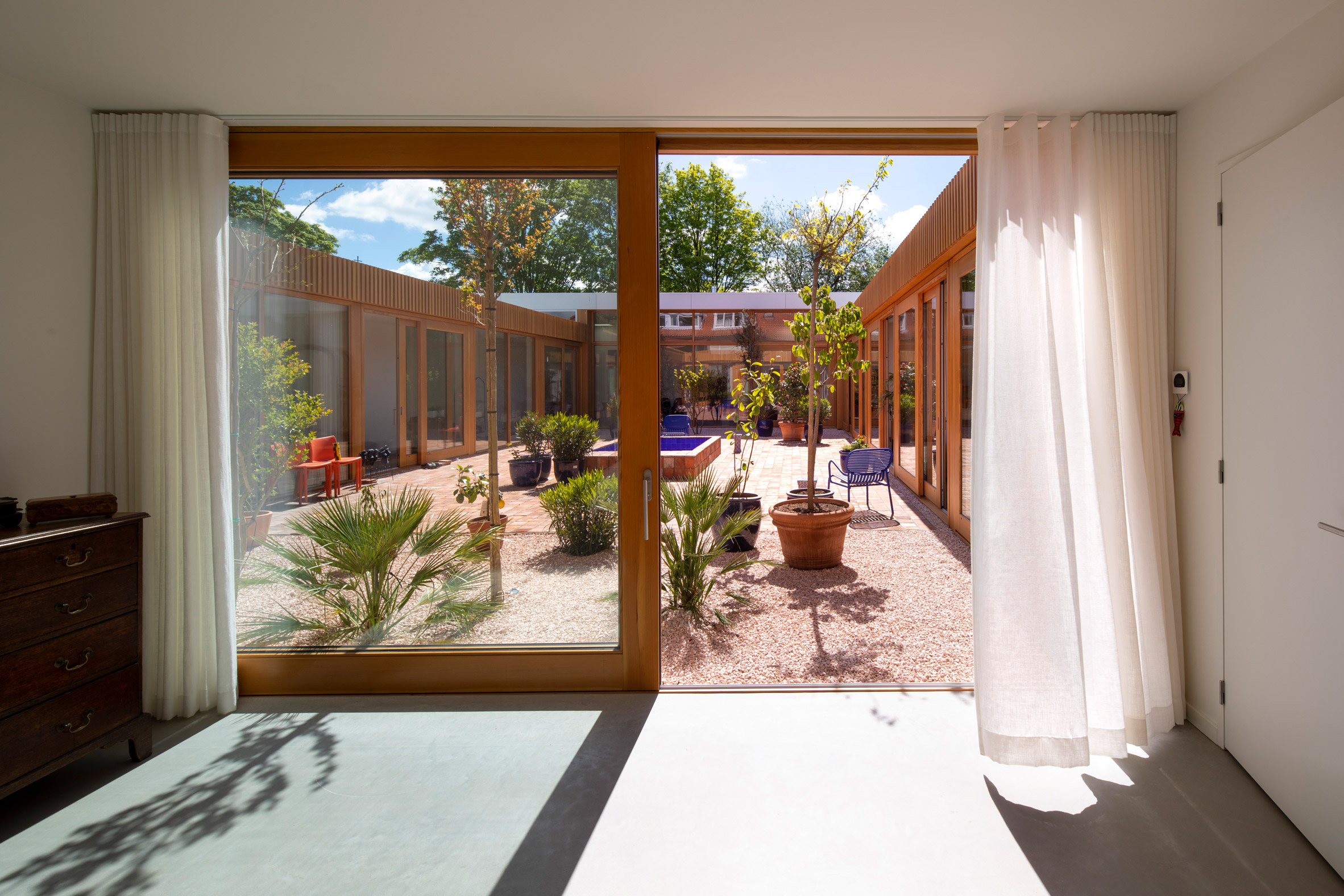 All of the home’s main rooms look onto the courtyard.An open plan kitchen with a breakfast bar, dining room and living room runs along another side of the building.

The kitchen island is a monolithic block of powder-coated steel. A room within a room at the opposite end contains a tv-watching area and hidden storage.

A master bedroom sits separately from the rest of the home, with its own walk-in wardrobe and bathroom, while a row of bedrooms that are accessed by a corridor that runs along the perimeter occupies one side of the building. 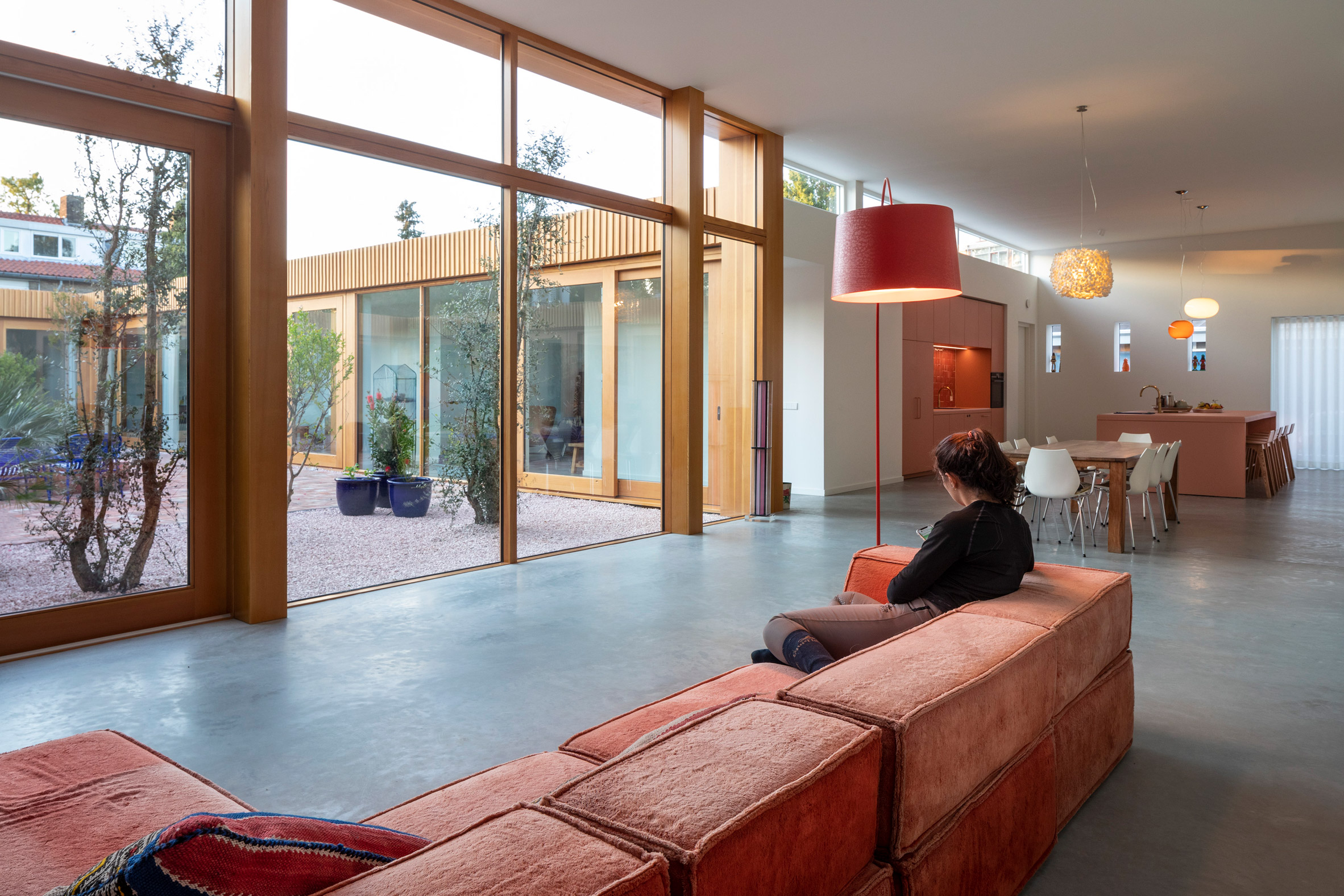 The L-shaped medical practice, contains a bike store for staff, private consulting spaces and a waiting room. It is shielded from the house with trees in the courtyard, which also contains spaces for outdoor dining and lounging.

Occupants can take shortcuts to different parts of the property when the weather is fine by crossing the courtyard, which serves as an open-air extension of the living quarters. 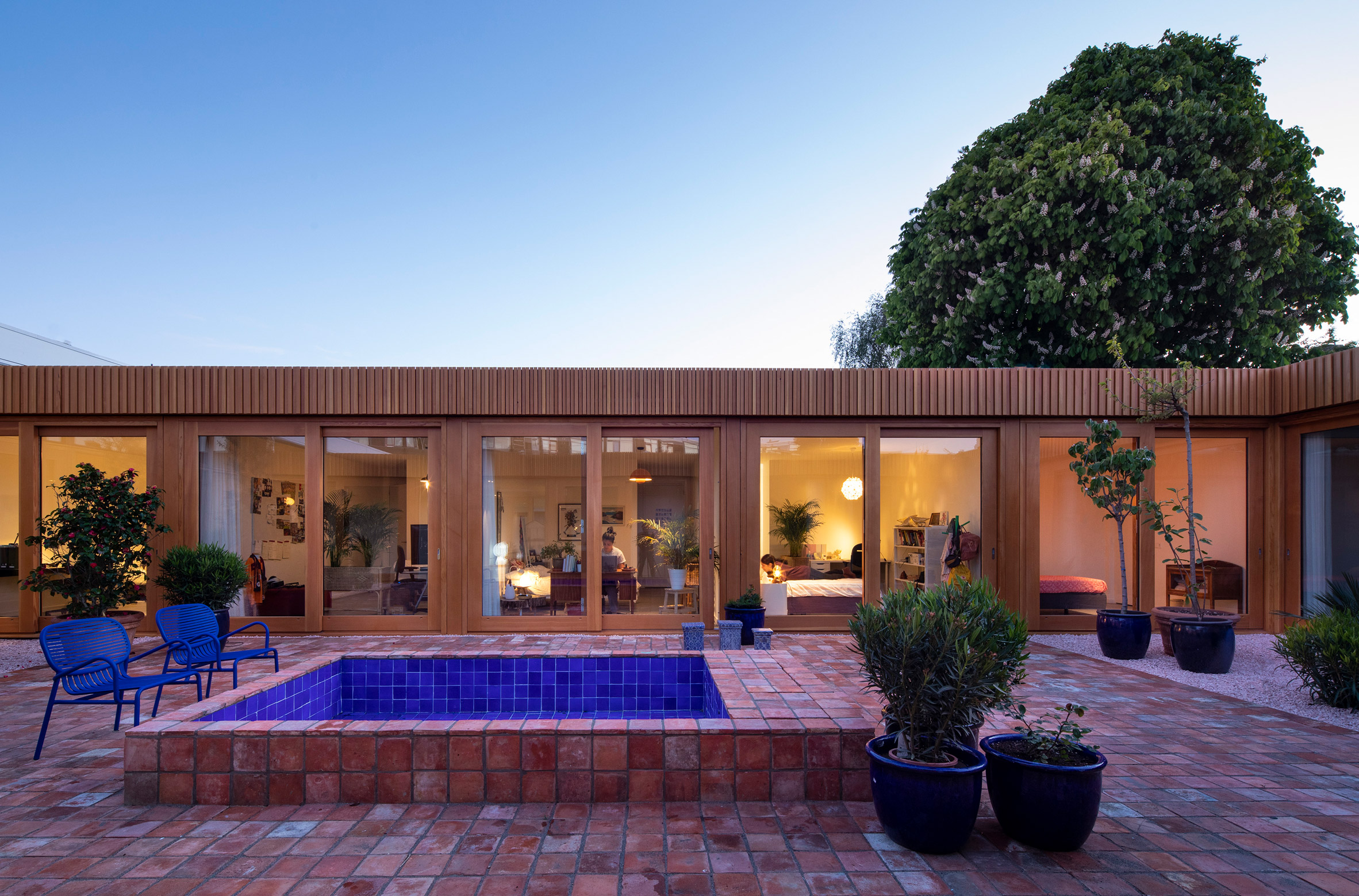 Bright blue glazed tiles that clad the interior of the sunken pool and its raised lip are another nod towards Moroccan architecture .

Marrakesh, in particular, is associated with Klien Blue, the deep blue created by artist Yves Klien and favoured by designer Yves Saint Laurent who famously painted his house there in this particular shade. The bathrooms of Villa Stardust also have Moroccan tiles. 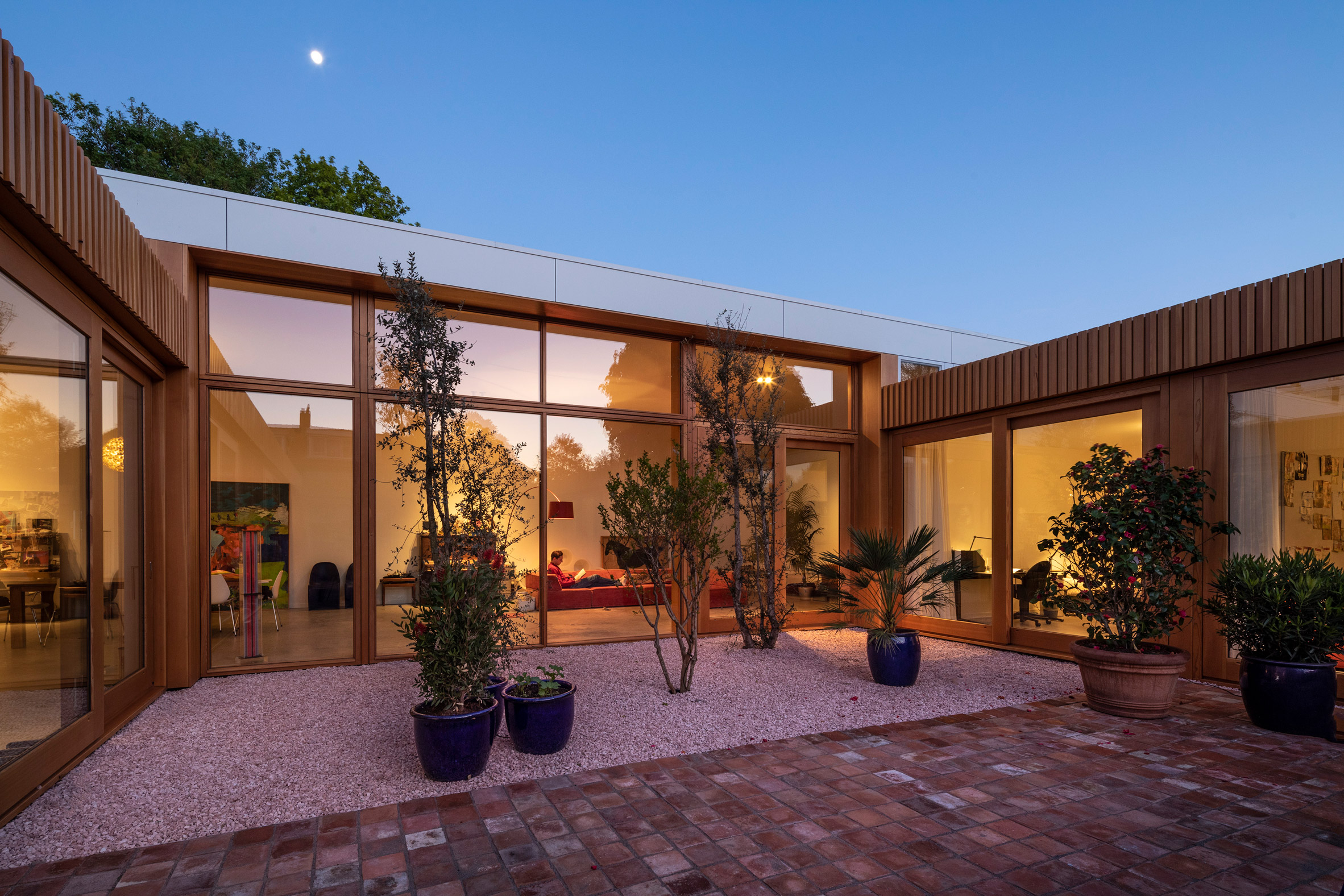 Sustainability was a key goal of this project. MVRDV said that as a retrofit, the protect followed the principles of the circular economy – where materials are kept in circulation rather than made, used and discarded for another new object.

As well as re-using the building instead of demolishing it, MVRDV selected recycled materials such as the terracotta tiles that pave the patio.

MVRDV was founded by Winy Maas, Jacob van Rijs and Nathalie de Vries in 1991. Another recent adaption re-use project from the practice involved transforming an abandoned factory into a school.