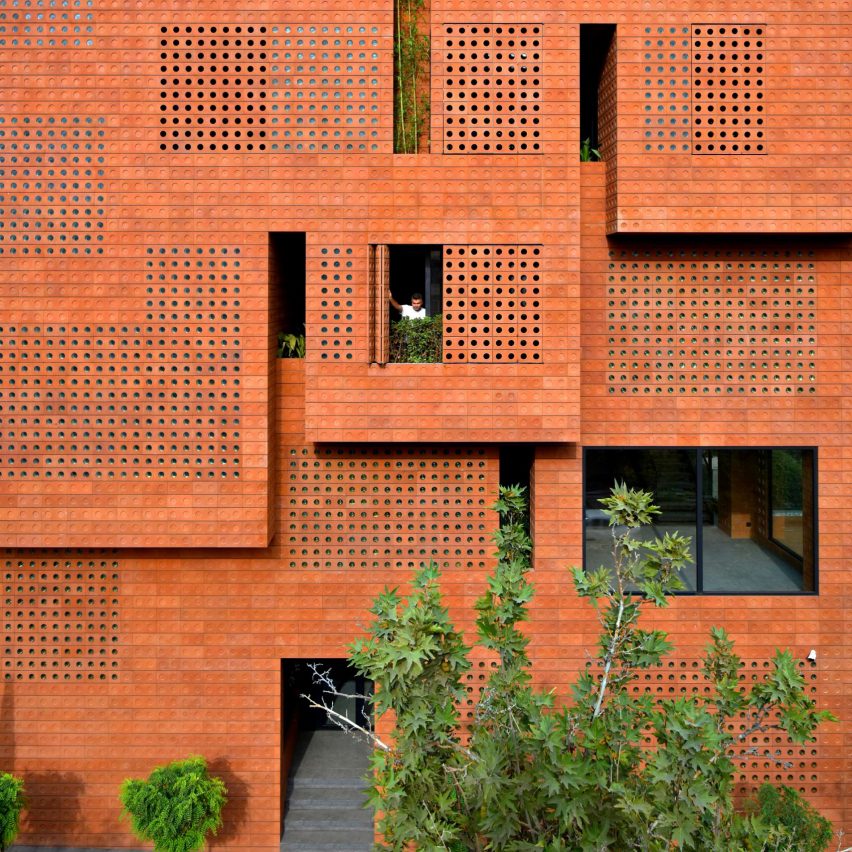 Tehran-based Hooba Design Group designed a special type of brick, which was manufactured in Kohan Ceram factory, for the six-storey block’s facades. 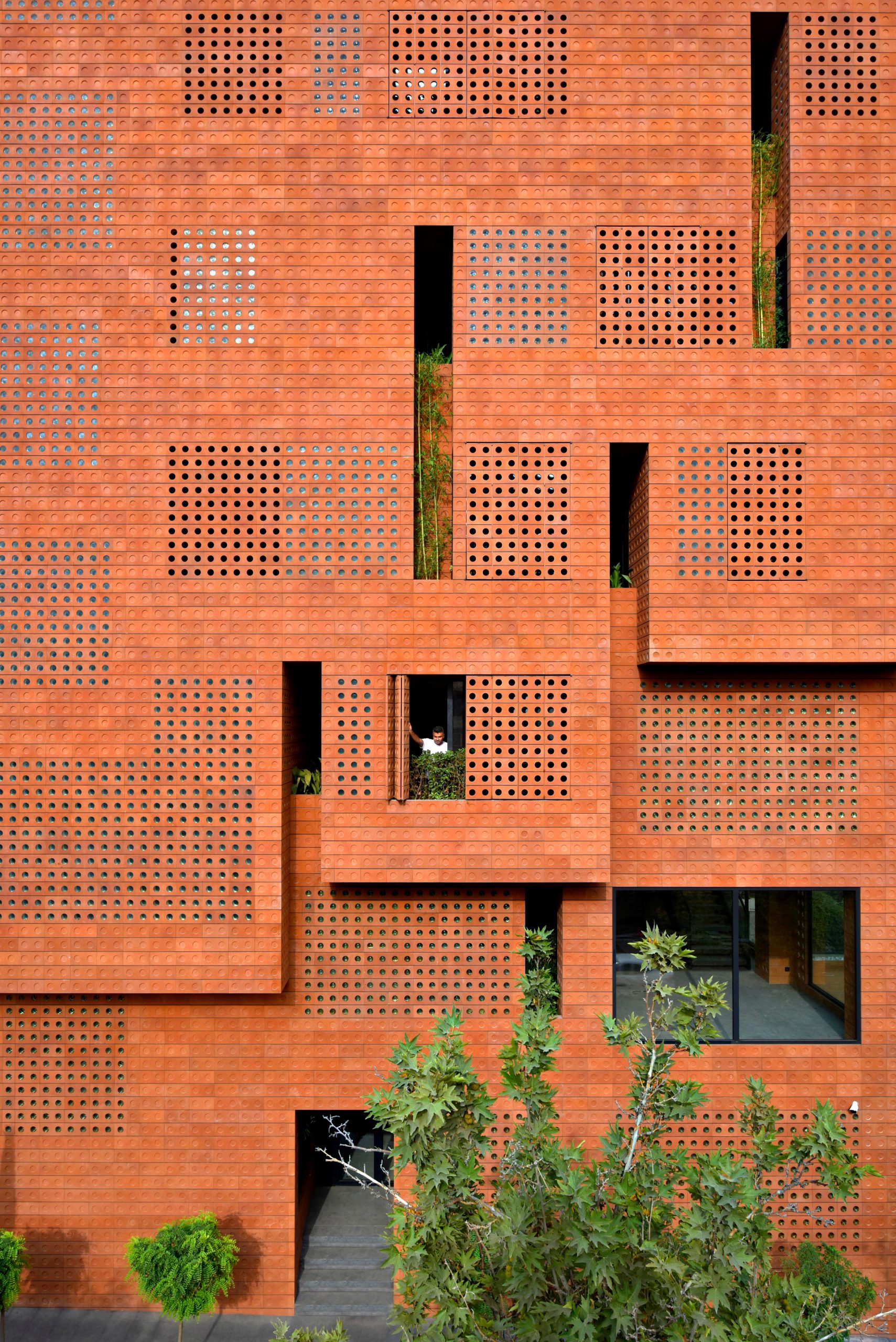 “The spectacled brick was exclusively designed by our office and produced by Kohan Ceram factory for this project,” said Hooba Design Group founder Hooman Balazadeh.

“The final block was achieved based on a series of trial and error samples,” he told Dezeen. “A close cooperation between our office and the producer resulted in an innovative building block which combines brick and glass to create a singular module.” 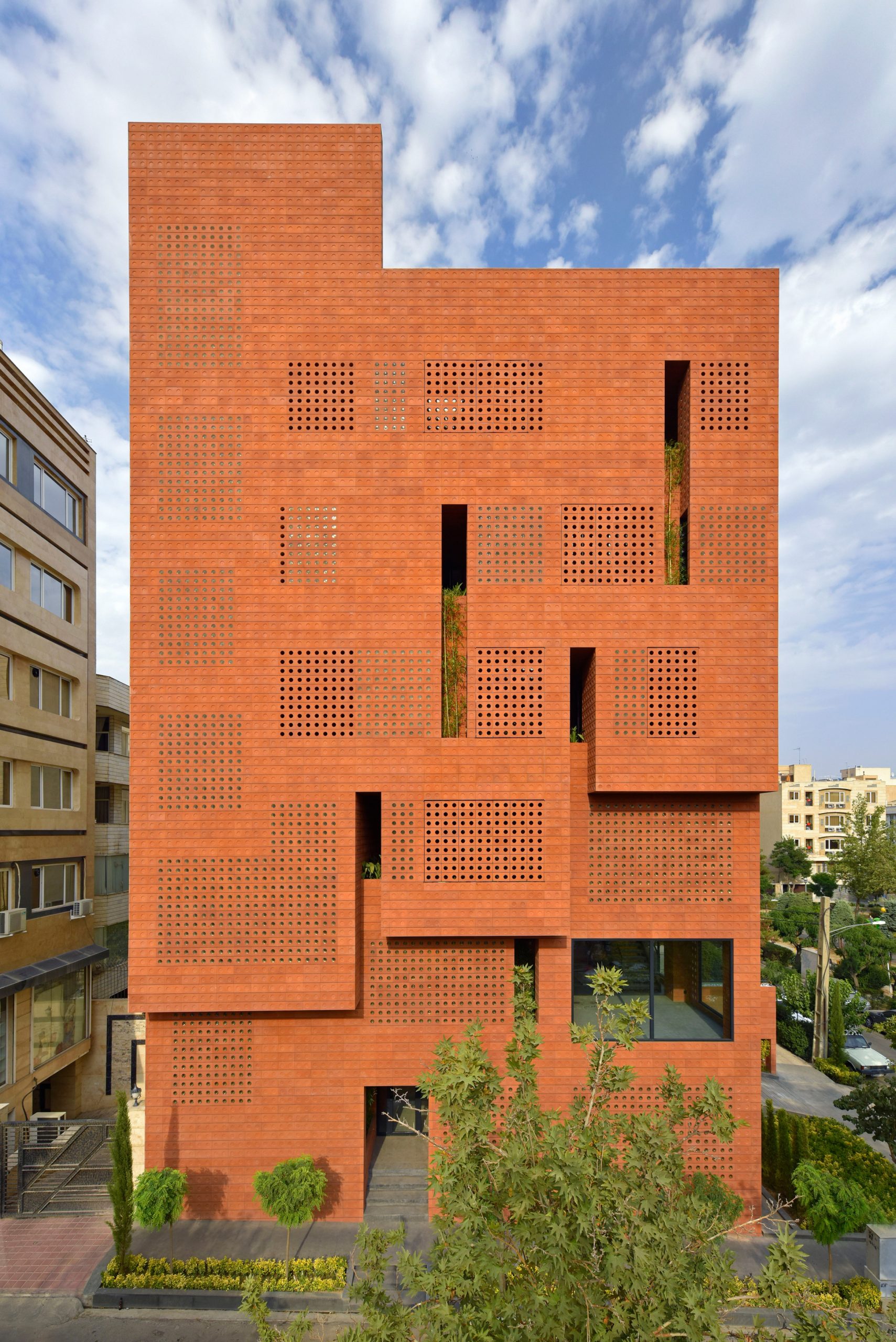 The brick, which has circular glass inserts, was used across the building’s facades where it creates geometric patterns broken up by narrow window slits.

Similar bricks with a round indentation, instead of the glass inserts, complete the exterior. Concertina window shutters in the same rust-coloured hue as the brickwork and with matching circular cut-outs cover the building’s windows to create a unified look for the facade. 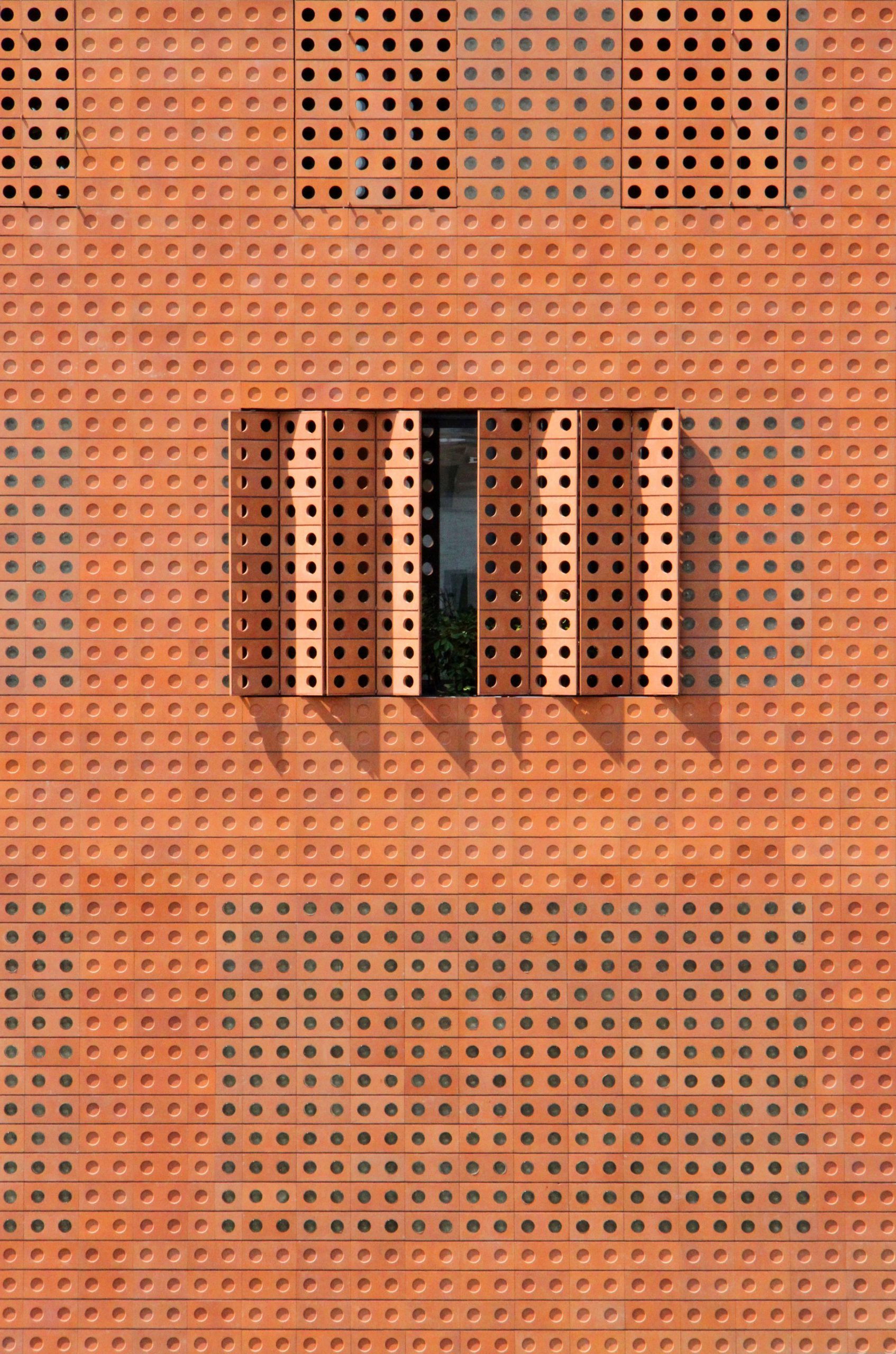 The block contains parking on its ground floor with a reception area and showroom for Kohan Ceram spread over the two floors above. The third floor contains office space for the company, with an apartment occupying the upper two floors.

Throughout the building the specially made bricks are visible with external walls left exposed. They are also used to create internal walls in the block’s showroom and circulation areas.

Granite stone and pale wood was chosen for the contrasting floor finishing. 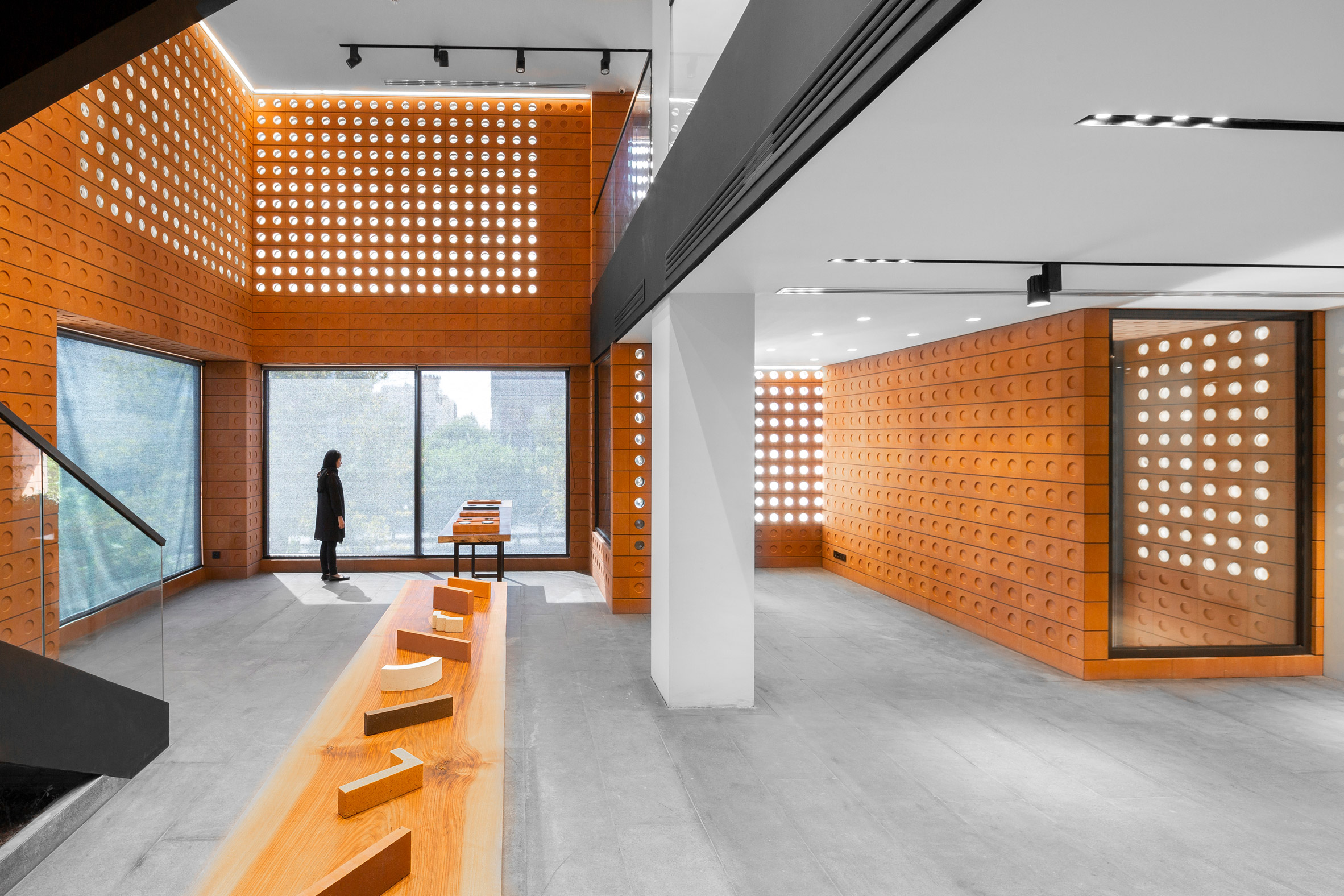 “In contrast to a regular wall, here the spectacled brick adds a semitransparent character to the solid brick wall,” Balazadeh explained.

“This block acts as masonry, thermal isolation, as well as exterior and interior finishing at the same time,” he continued. “This brick enables natural light penetration to create a unique and pleasant interior environment.” 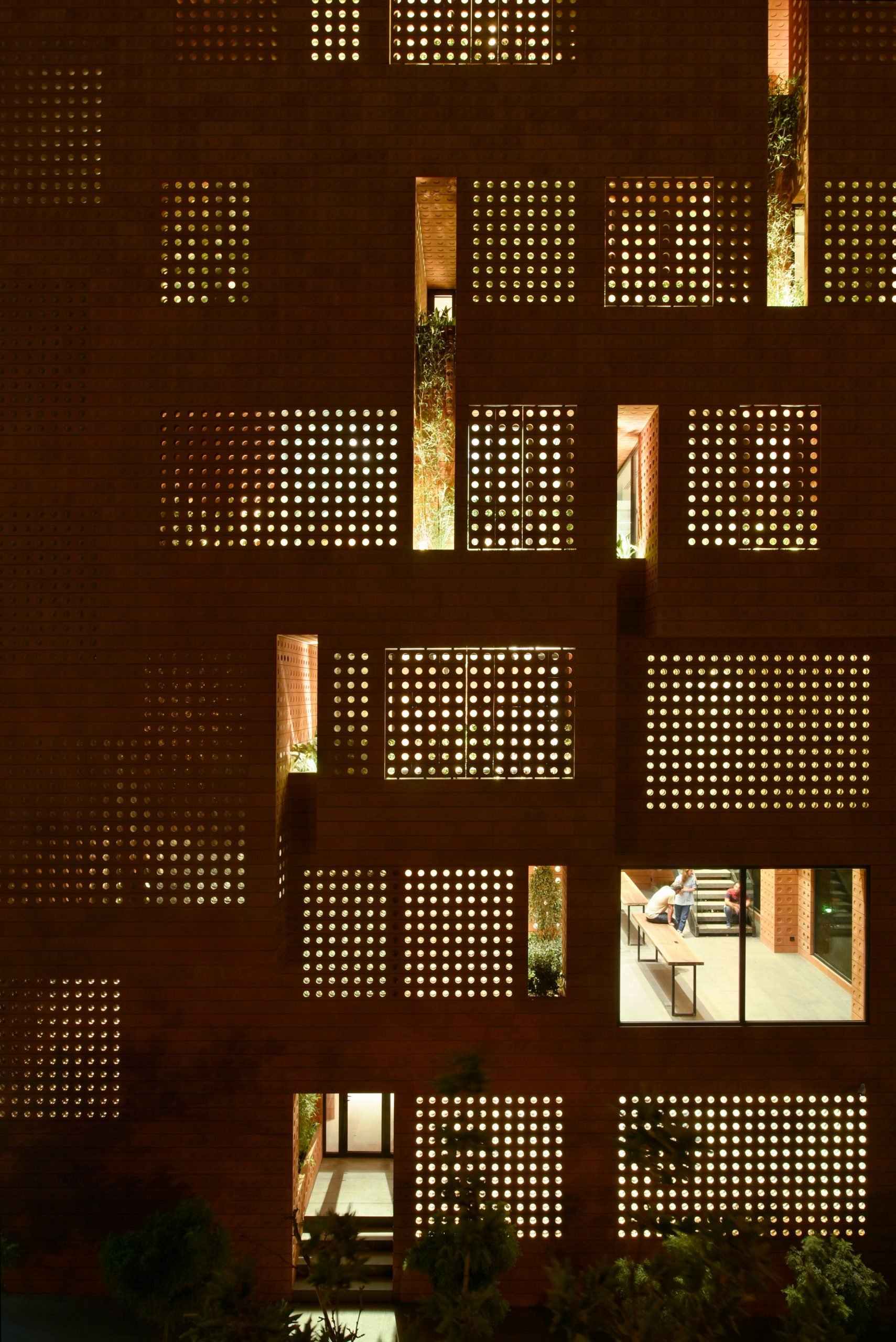 While during the day the glass inserts allow light into the building’s interiors, at night, lights from inside the building shine, lantern-like, through the walls.

Along with the building being for a brick manufacturer, Hooba Design Group believes that using the material makes was appropriate for the block, which sits on the boundary between a residential neighbourhood and the motorway. 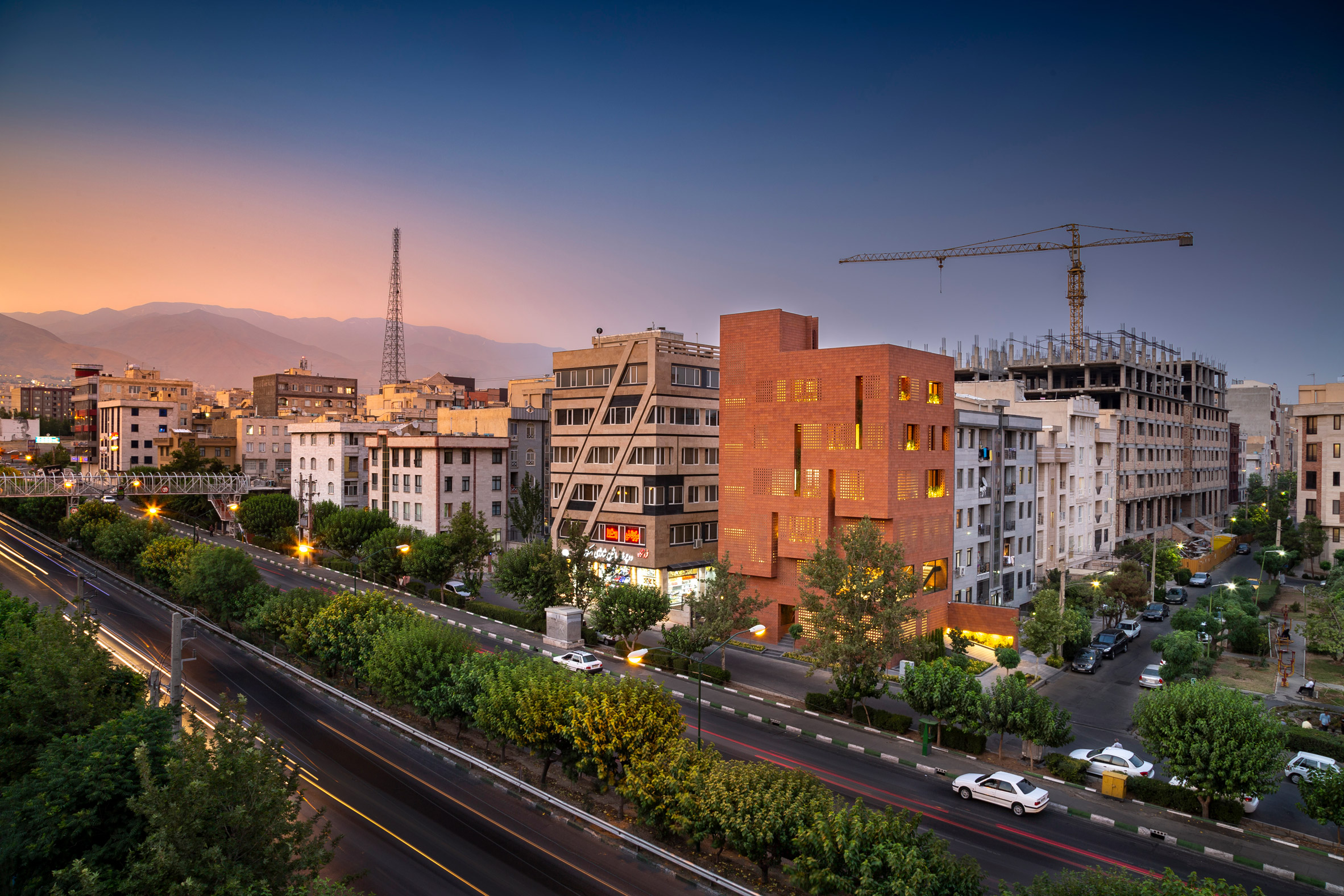 “The urban scenery along the major highways in Tehran is an amalgam of forms and materials, causing visual disturbance to the urban environment,” Balazadeh said.

“This project tries to overcome this issue by minimalizing the form and limiting the materials. The resulting building is calm and neutral in the urban scale,” he continued.

“In the building scale, on the other hand, the spectacled brick creates a very different perception for the observer and adds a layer of detail to the atmosphere.”