Timber and Indian stone tiles feature inside VS House in Ahmedabad Architecture studio Sārānsh used a range of materials to create a rich sense of tactility inside this family home in Ahmedabad, western India.

VS House is situated on the fringes of the city of Ahmedabad. It was built seven years ago as a four-bed home but has been reconfigured by Sārānsh. Now it hosts three bedrooms and more expansive living spaces. 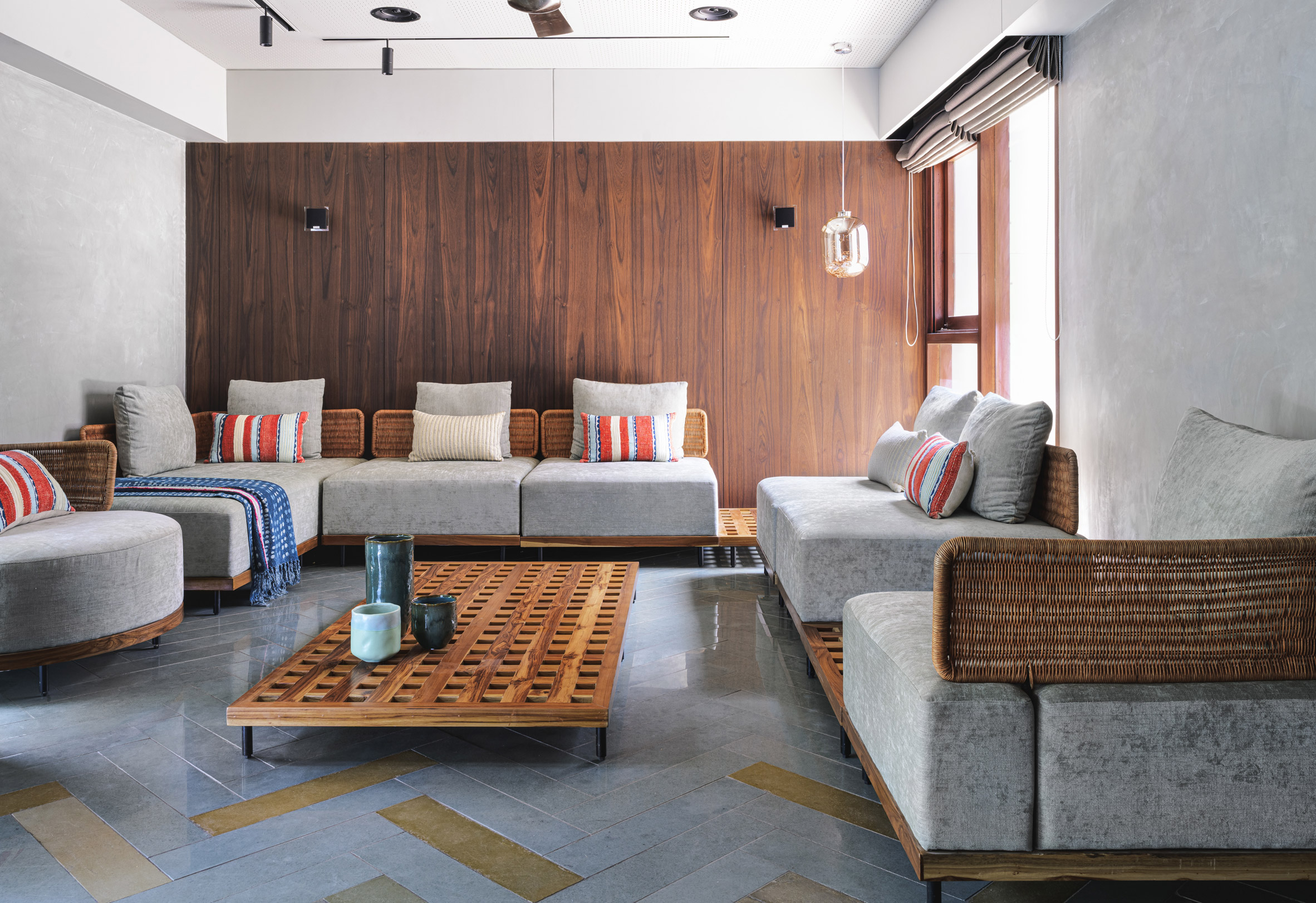 “The house is designed with a very minimalist tone,” explained the studio. “Instead of adding more elements, the focus has been given on the nature of the materials used to finish the insides, which create the entire ambience.”

“An emphasis was given on an individual’s visual and tactile journey through the house.” Flooring throughout the house has been completed in grey Kota stone – a variety of limestone that’s quarried north of India in Rajasthan.

In the living area, the Kota tiles have been applied across the floor in a herringbone pattern. A low-lying timber plinth punctuated with square-shaped holes runs around the perimeter of the room, supporting plush grey seating cushions. Larger slabs of Kota have been used for flooring in the home’s less formal sitting area, which is dressed with timber-framed blue sofas. This room opens onto an outdoor terrace that overlooks a planted courtyard.

Small blocks of Kota have then been arranged in linear strips on the floor of “movement spaces” like corridors, or set alongside panels of wood for the bedroom floors. The material palette takes a turn in the moody dining room, where the floor is clad with jet-black Kadappa tiles that hail from the Rayalseema region of southeast India. A matching black table and dining chairs with black-fabric seats sit at the centre.

Like the other rooms on the ground floor, walls here are washed with grey plaster to allow timber elements to stand out. 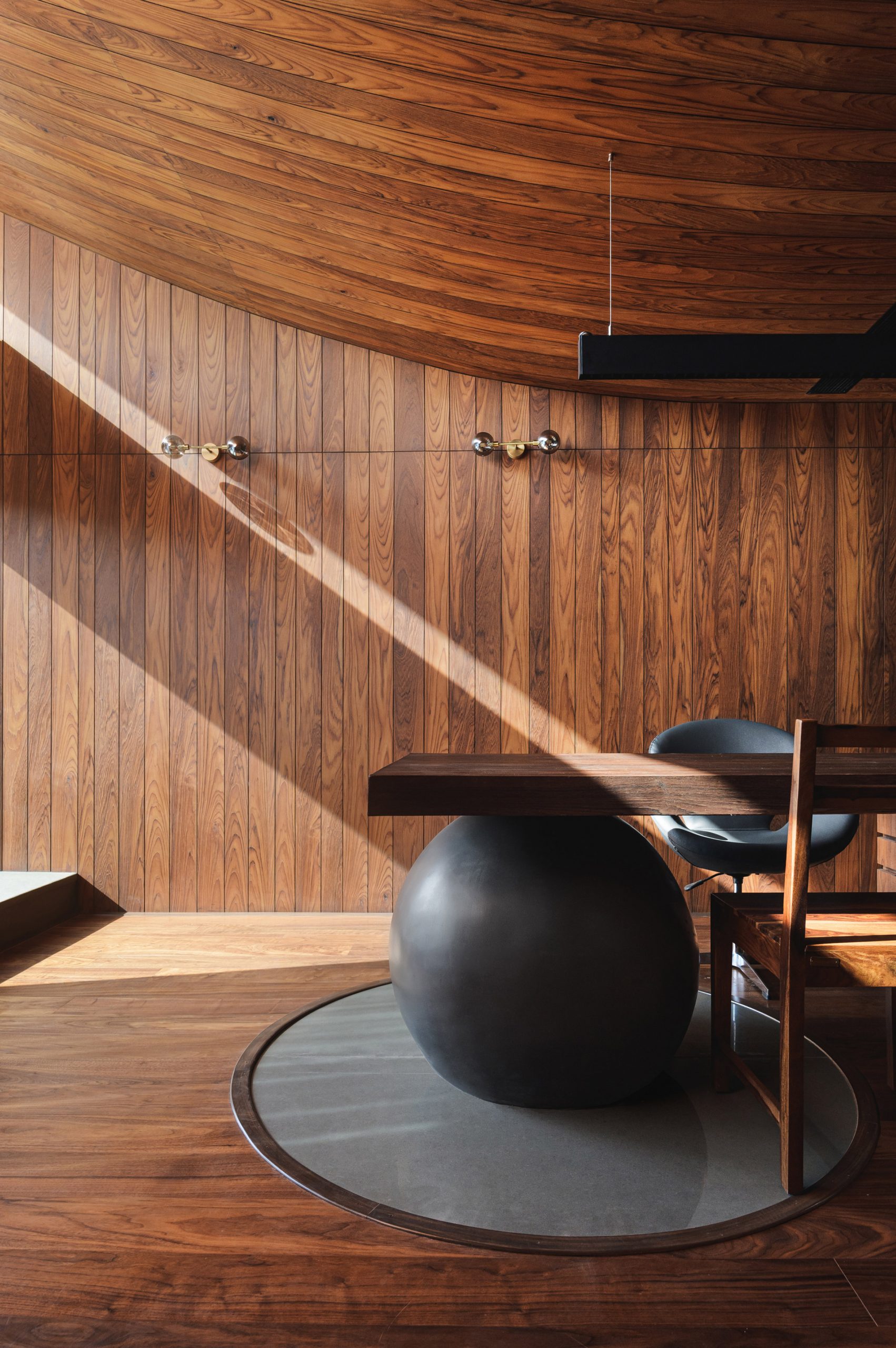 There’s also a clashing mix of Indian stone in the bathrooms. While flecked grey tiles have been laid on the floors and walls, a veiny, emerald-coloured marble has been used to back fixtures like the toilet and mirrors.

A study has been created upstairs on the first floor of VS House by connecting part of a passageway to an adjacent terrace.

Sārānsh envisioned this room as a “wooden box” – warm-hued timber lines the walls, floor and the upward-curving ceiling, half of which had to be built from scratch. 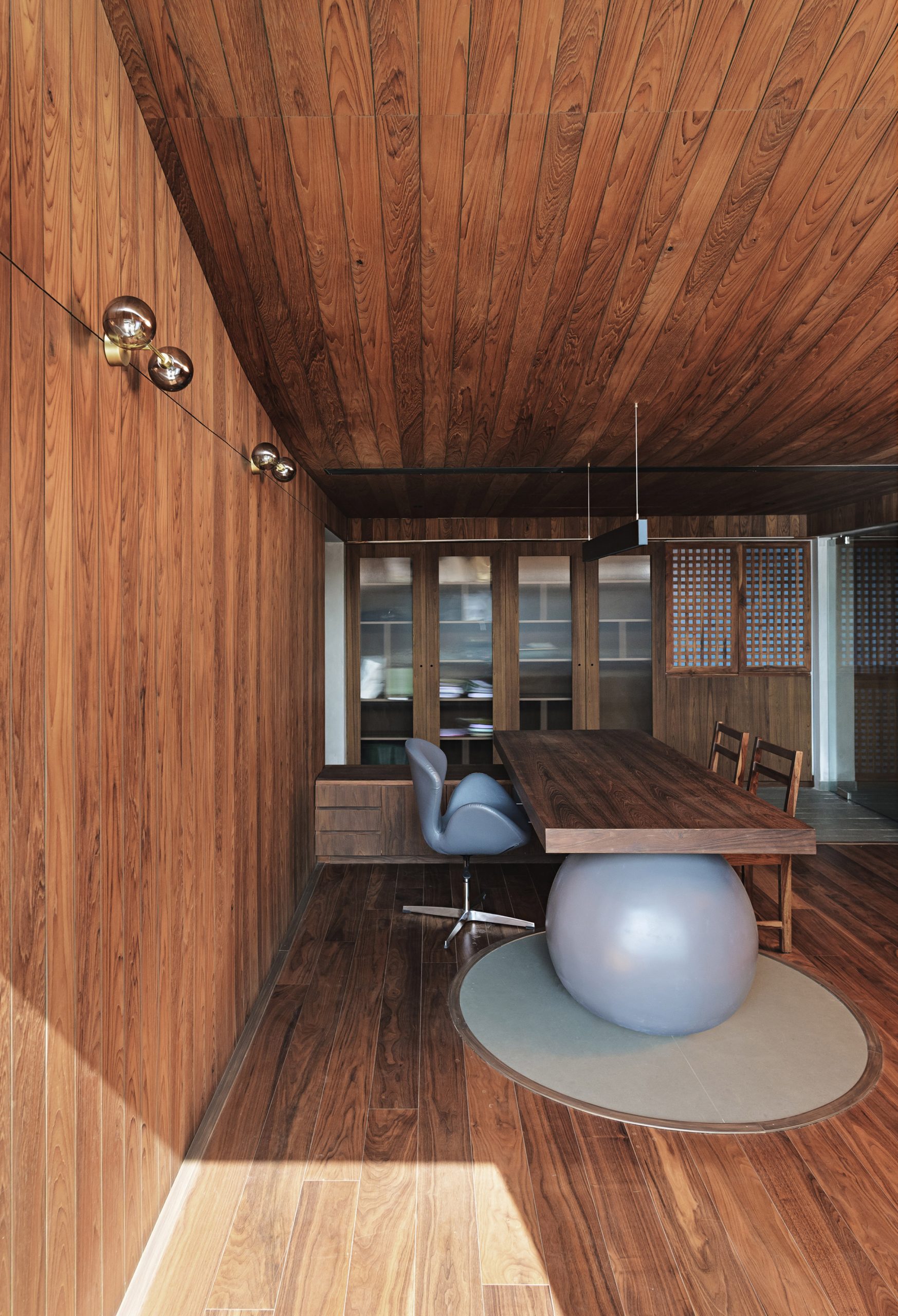 Timber has even been used to make the room’s desk, which balances on a huge spherical volume.

“The aim was to create a feeling of entering into a den, which is isolated from everything else,” the studio added. The same materials used in VS House’s interior have been applied to its outdoor areas, which were also updated by Saransh.

A wooden deck has been erected to accommodate a jacuzzi, and Kota stone has been used for the flooring of the open-air lounge.

The studio also built a pavilion-like structure to host a personal gym for the family. 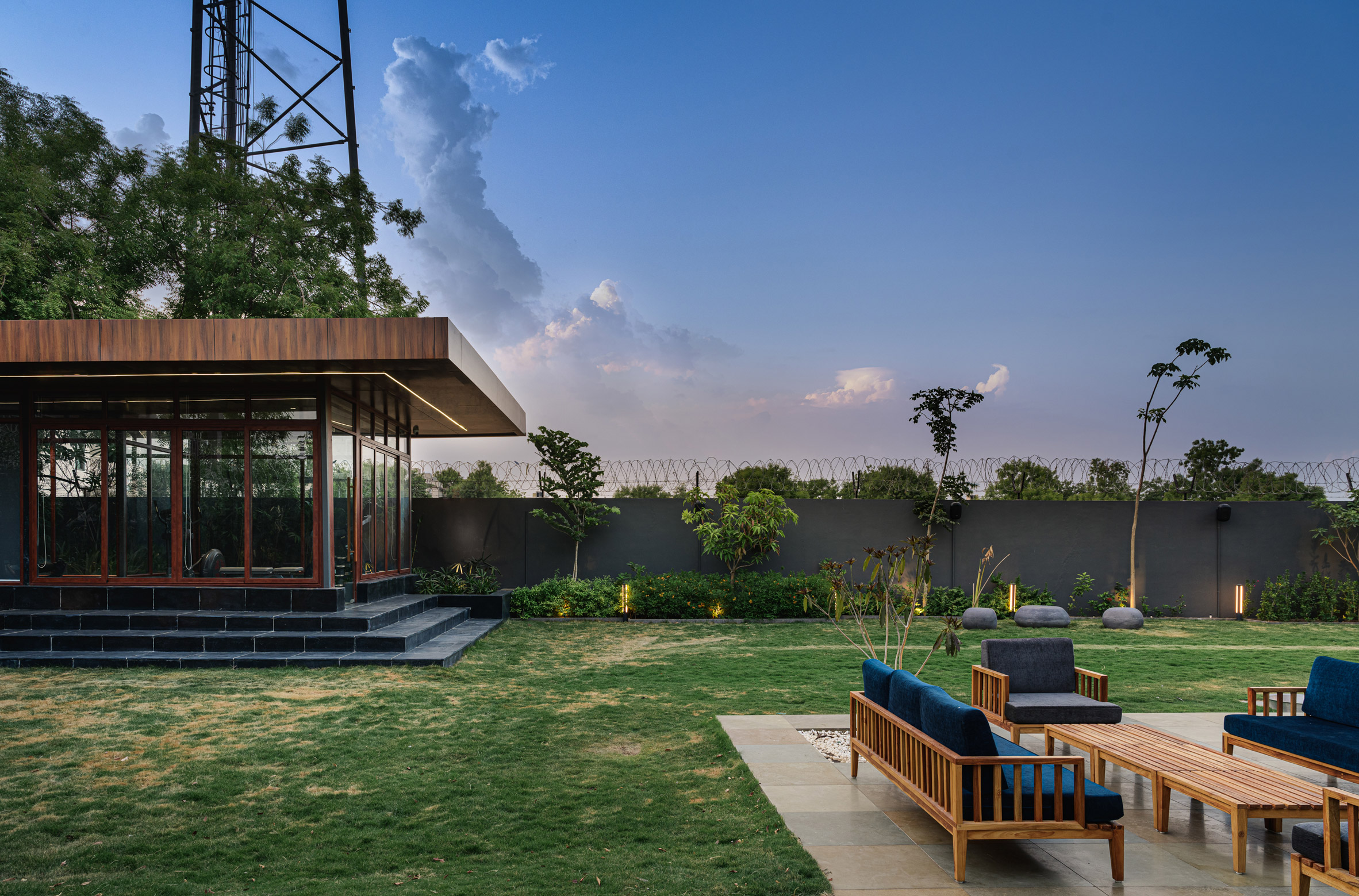 Sārānsh was established in 1994 by Manish and Malini Doshi. This isn’t the first residential project that the studio has completed in its home city of Ahmedabad – earlier this year, it transformed a two-bed apartment into an open-plan studio.

In the absence of walls, materials such as concrete, blue tiles and teak wood were used to create a sense of definition between living spaces.

Photography is by The Fishy Project.

The post Timber and Indian stone tiles feature inside VS House in Ahmedabad appeared first on Dezeen.