Reinforced white concrete panels punctured with cylindrical openings form shutters across the facade of this house in southern Brazil designed by Arquitetura Nacional.

Arquitetura Nacional custom-made cladding to shade the upper level of Casa Ventura, which is situated on a corner lot in a gated residential community in Xangri Lá. 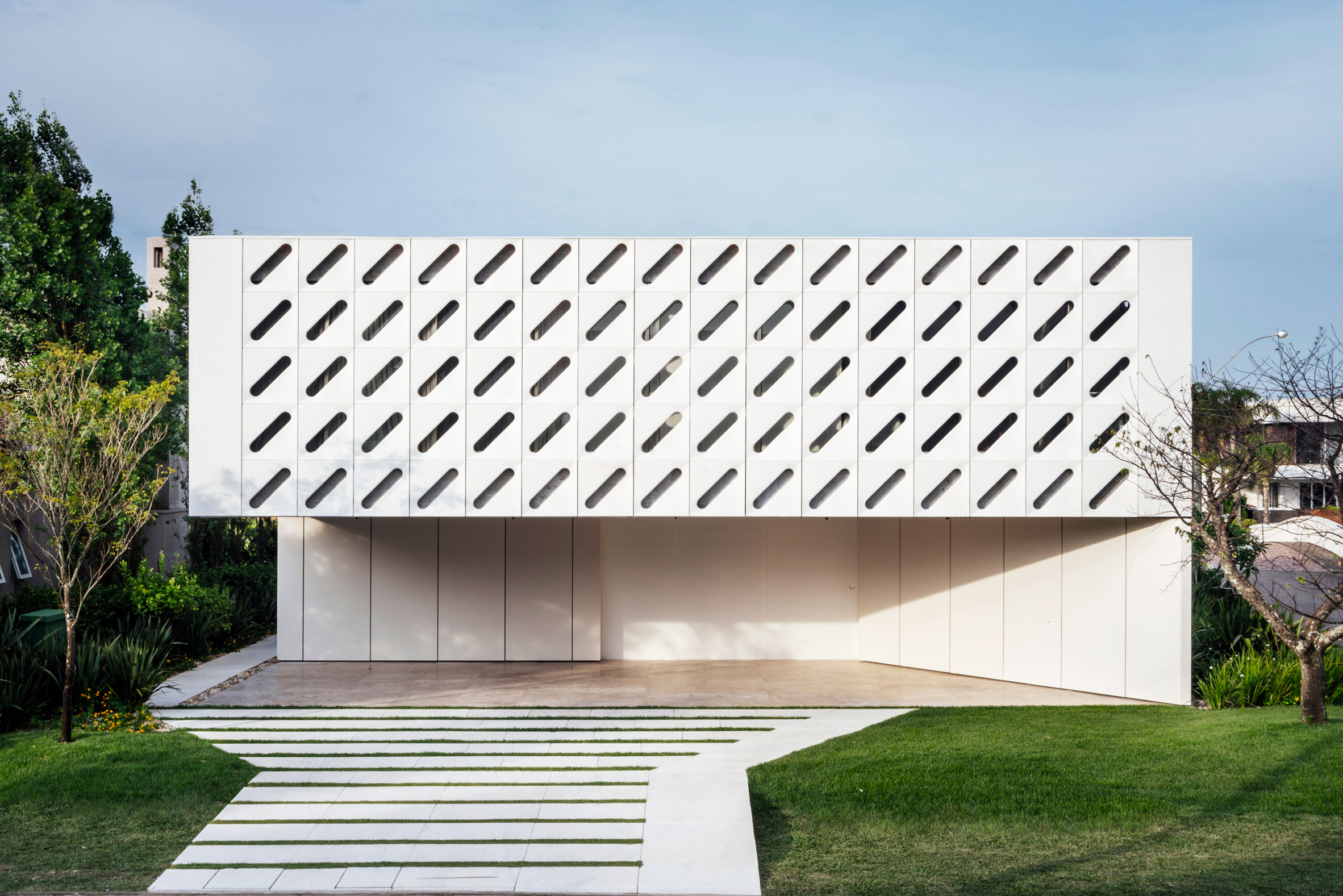 It comprises panels of glass-reinforced concrete (GRFC) that are punctured with slanted cut-outs to filter natural light inside. Some of the panels also form shutters that can be opened by a lever inside the residence to reveal the glazing behind them.

The white panelling wraps a boxy volume that is stacked and cantilevered on top of an L-shaped structure to form the 600-square-metre house. 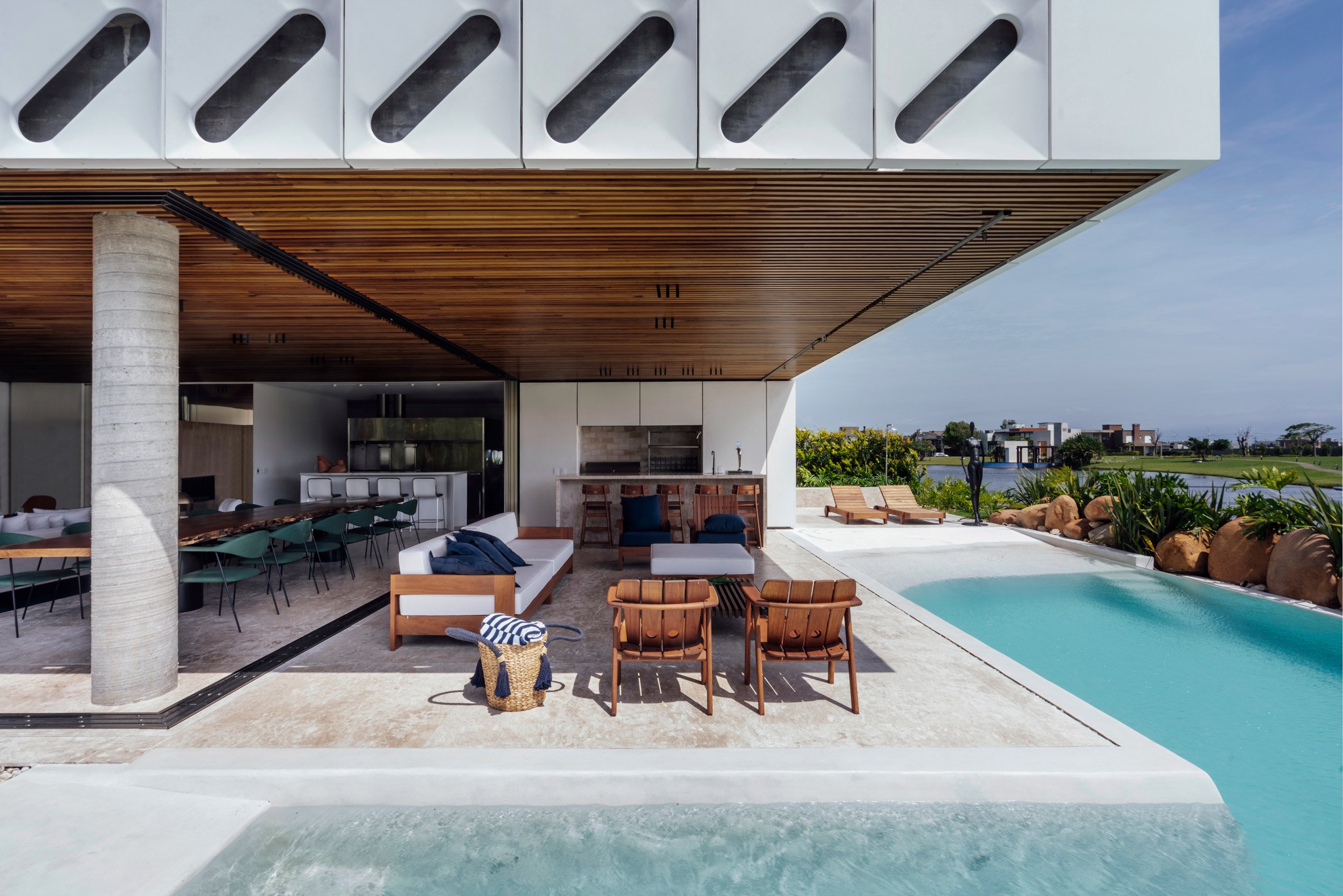 Slender wooden slits detail the underpart of the top volume, which extends over an outdoor sitting and dining area that abuts the swimming pool.

Lush plantings on the northeast corner of the house block the strong winds, common to the region, that come from that direction. 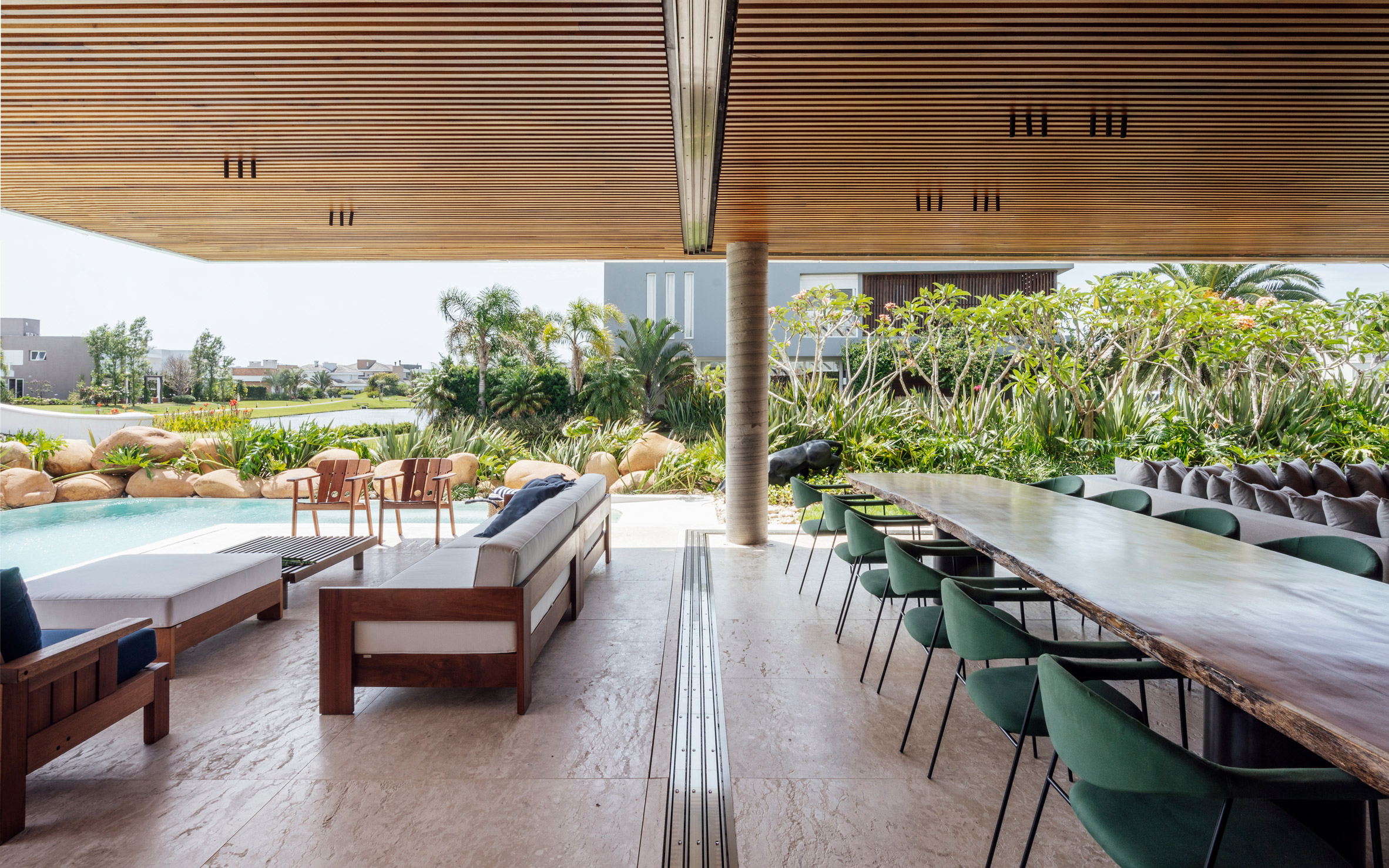 An L-shaped pool is situated alongside a patio furnished with wood dining and lounge pieces and an outdoor kitchen and bar counter.

Large retractable glass windows encase two sides of the ground floor to open the interiors to the property’s rich vegetation and swimming pool. 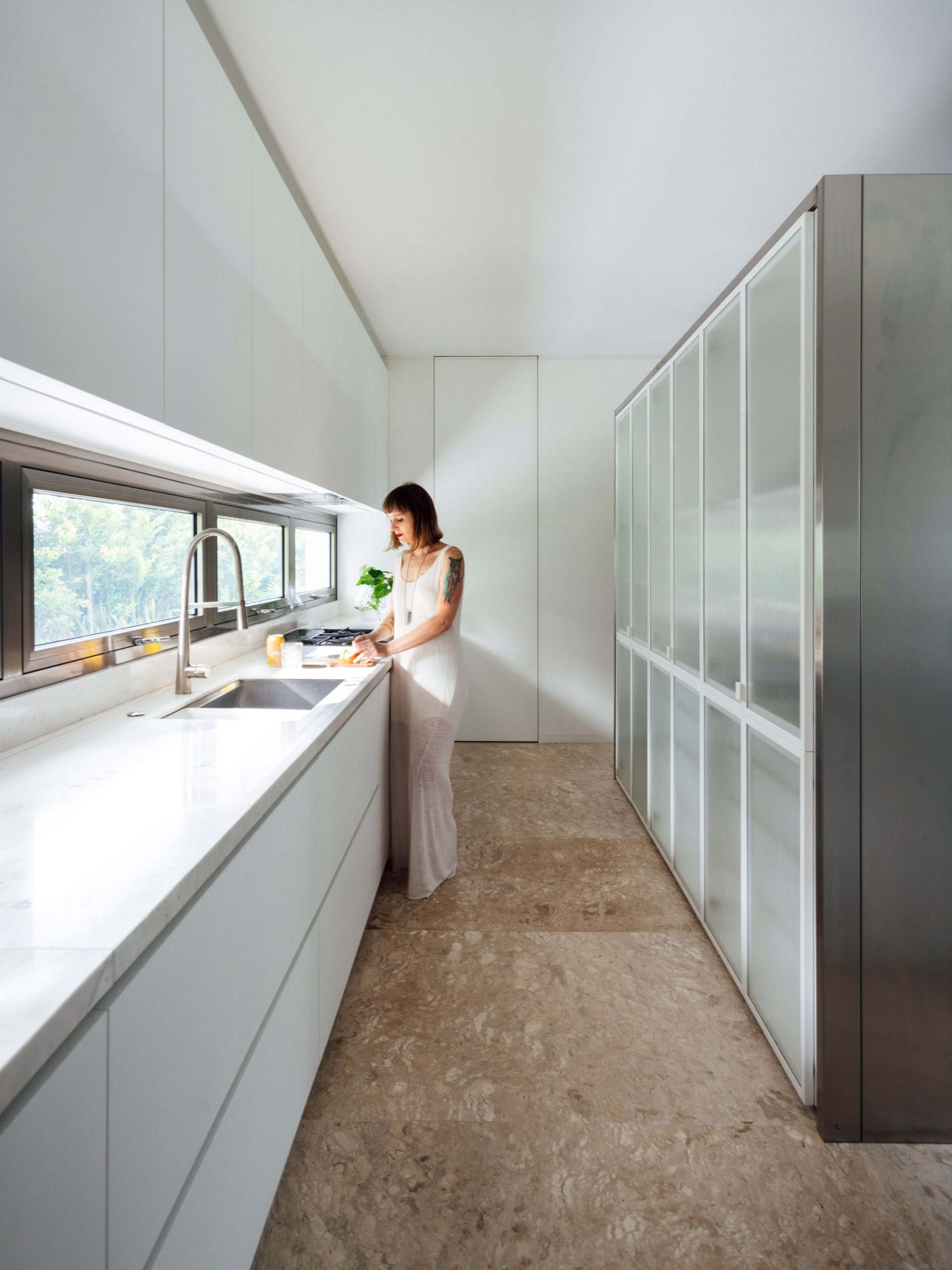 “With the total opening of the windows, the internal and external environments merge, further expanding the possibilities of using the social spaces,” the studio said.

While the ground level is predominantly glazed, there are two monolithic volumes covered with white GRFC panels to house the staircase, elevator and a bathroom. 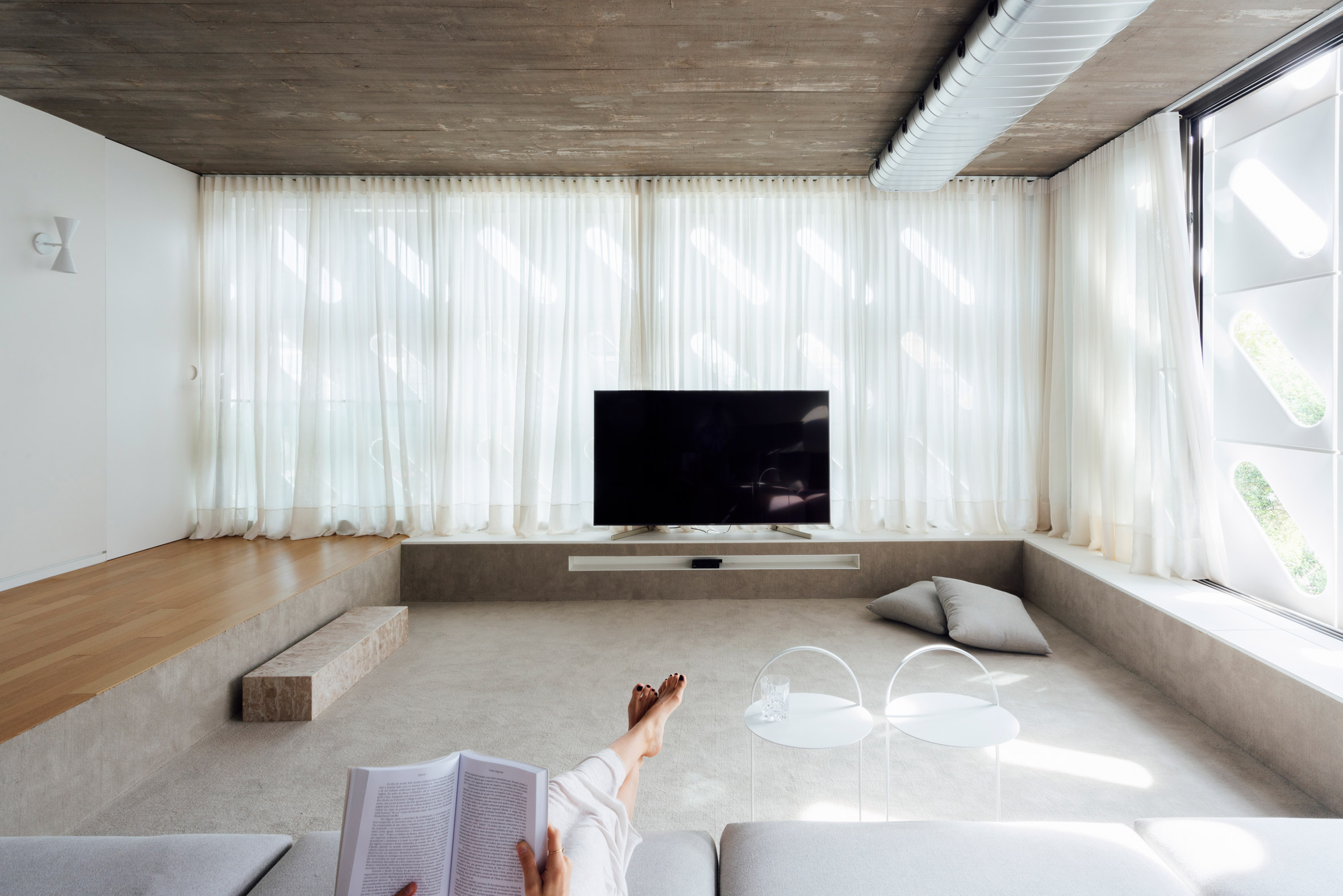 Four bedroom suites are located on the top floor, and each opens onto a small balcony that is housed behind the white-shutter panels. These also shade a terrace with a hot tub room, while other spaces on this level include a massage room and a TV room.

Among the house’s interior details are a fireplace outlined with black and white stone that is inserted into a large wood cabinet that faces the living room.

In the narrow kitchen, there is white cabinetry and countertops, and a metal storage case fronted with rigid translucent doors. 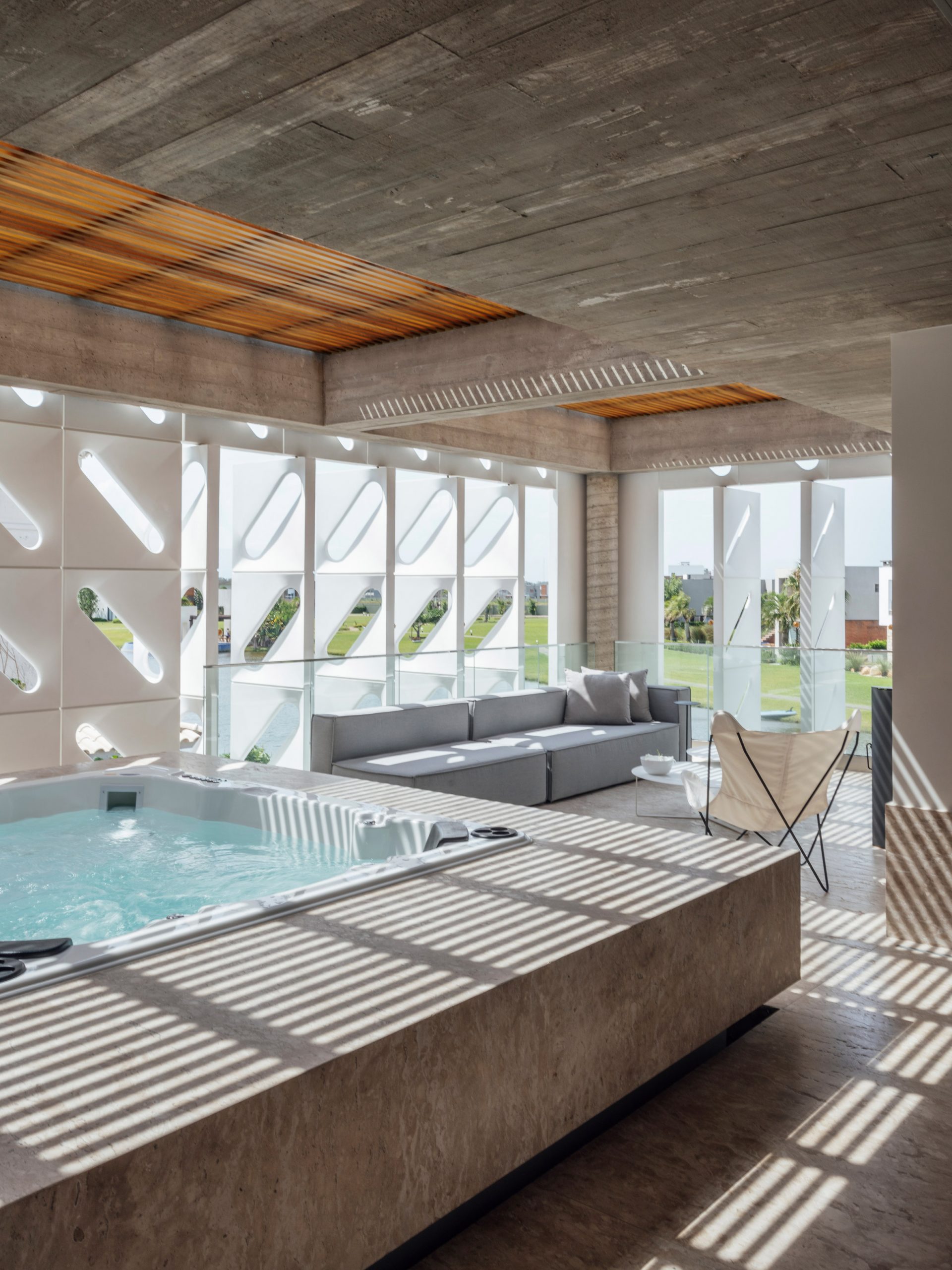 In the media room, on the upper level, couch cushions and a television are placed inside a carpeted sunken room. 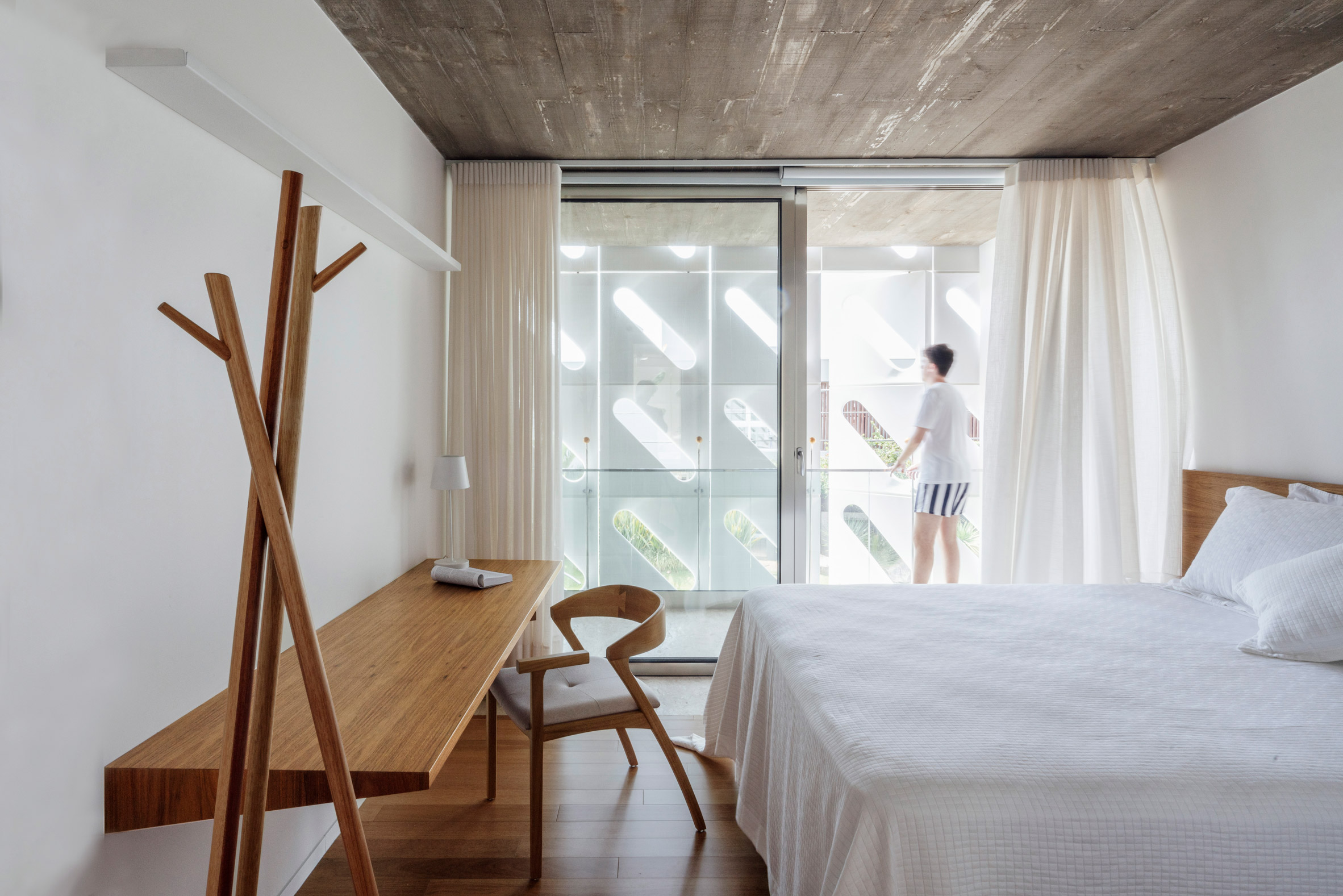 Arquitetura Nacional is a Brazilian architecture firm with offices in São Paulo and Porto Alegre founded in 2010 by Eduardo Maurmann, Elen Maurmann and Paula Otto. The studio has designed an apartment in Porto Alegre with a sculptural staircase and an apartment block with a wall of sliding doors.

Other residential projects in Brazil include a house with a scooped roof by Rodrigo Simão Architecture and a house by Olson Kundig designed to “hover” over its jungle surroundings.

Photography is by Cristiano Bauce.