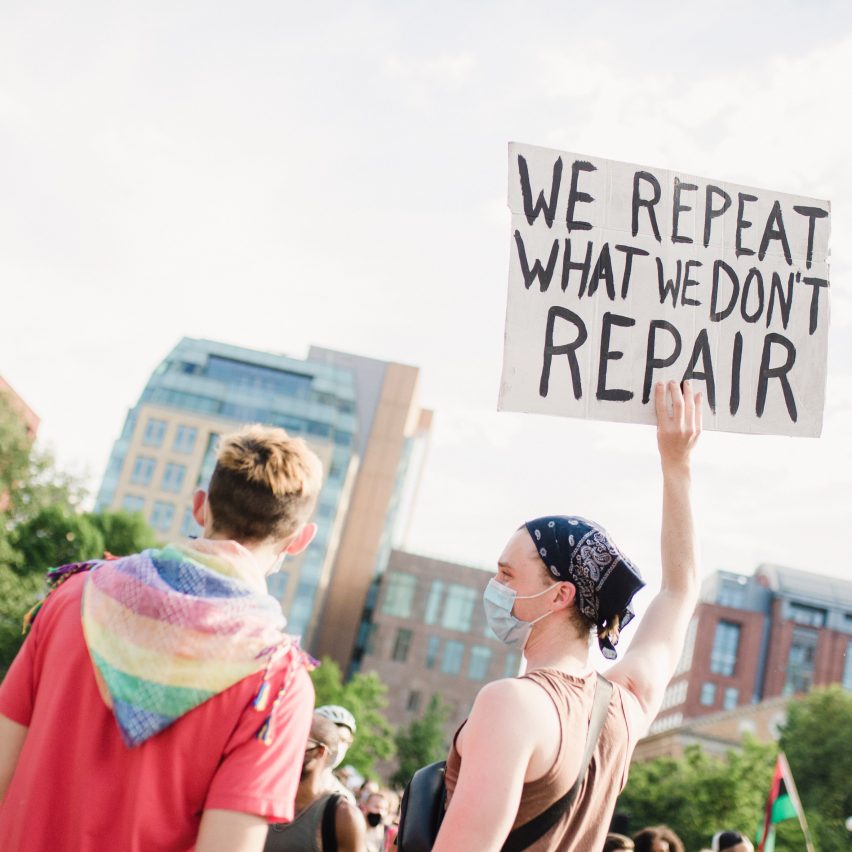 Against the backdrop of coronavirus lockdowns and anti-racism protests, Pride Month 2020 has been about resistance and solidarity say LGBT+ designers.

This year’s month-long time of celebration for the queer community has happened in a unique social, political and environmental context that has reaffirmed the need for action, report queer designers from Europe and the USA.

“There is so much forthright and vigorous defiance in the face of a more aggressively hostile external context than we’ve seen probably since the 1990s,” said designer Adam Nathanial Furman.

“There may not be a Pride parade this year, but it is more important than ever to be brave and loud and open to keep up visibility,” agreed 2LG Studio co-founder Russell Whitehead.

“Honestly, Pride, to me, has felt more prideful this year,” said architectural designer A L Hu. “The spirit of Pride is in resisting.”

“We are witnessing the unbearable struggles of the black community”

The coronavirus pandemic saw many Pride events cancelled as part of measures to slow transmission rates, while anti-racism protests have happened around the world following the death of George Floyd at the hands of the police in Minneapolis a few days before Pride Month began on May 25.

In the first few weeks of June two black trans women in America, Riah Milton and Dominique Fells were murdered.

“This year celebrations in many countries were postponed or cancelled or held digitally because of Covid-19,” Trimarchi told Dezeen. “But we are also witnessing the unbearable struggles of the black community and even more so of the black trans community.”

Together with his partner, Simone Farresin, they are Italian design duo Formafantasma, a design studio based in the Netherlands with a focus on sustainability.

Trimarchi believes that it is extremely important that the queer community shows solidarity with the black community as the safety of both is often threatened by similar forces.

“While it is very much important to recognise the specificity of each minority and to do not generalise it is also important to recognise that the political forces that are shaping our lives and undermining the rights of the queer community are also very often the ones that threaten the safety of the black people and that do not recognise the ecological crisis we are all drowning in and the clear cause of the recent pandemic,” said Trimarchi.

“It is vital to realise that ecological crimes and social injustice are born from the same heteronormative, very often western culture we must rethink.”

British interior designer Whitehead believes that the oppression faced by black and trans people should be at the forefront of the LGBT+ community’s focus this year. Whitehead and his partner Jordan Cluroe are the founders of 2LG Studio, which stands for Two Lovely Gays.

“At this time, in particular, black trans lives are under threat and must surely be the focus of Pride,” Whitehead told Dezeen.

A L Hu, a queer, non-binary person of colour working as an architectural designer at Solomonoff Architecture Studio in New York, agreed.

“The spirit of Pride is creating the space you need to thrive but has been denied by the structures of society,” Hu told Dezeen.

“The spirit of Pride is breaking out of the storylines and stereotypes that have been written for you, and fighting for your right to exist and live even when violence and death threaten to annihilate.

Solidarity with Black Lives Matter is “an obvious choice”

However, current anti-racism protests demonstrate that Pride should return to its revolutionary roots believes Hu.

“I hope it’s clear now to allies that parades and celebrations hosted and funded by corporate interests are not what Pride is about, no matter how beautiful and festive and fun and inclusive those events can be,” they said.

“The fact that Stonewall was a riot and the civil rights protests were written off as ‘riots’ makes solidarity with Black Lives Matter an obvious choice.”

Seeing queer activists organise against violence directed at black and trans lives in 2020 has been inspiring, said Nathanial Furman, a London-based queer designer of Argentine, Japanese and Israeli heritage, particularly when trans rights in the UK and US are under threat.

“Overall there is still plenty more solidarity and love, and forceful support for those within our coalition who are most vulnerable,” he said.

“It has been with true pride, rather than ‘Barclays Pride’ or ‘Ernst & Young Pride’, that I’ve watched the radical and outspoken aspects of the community come back to the fore.”

However, prejudice is still rife in the design industry believes Furman.

“Queers and other minorities are accepted into the profession if they manage to make it past the barriers, so long as they design artefacts that are not recognisably different from those that would be designed by those who tolerate them,” he told Dezeen.

“They want any form of expression that is not their own to be contained in sanitised, temporary events, parades that make them feel they are inclusive for turning up and waving a flag but really leave our cities as entirely their territory, as machines for the constant reinforcement of the status quo, for all the other 364 days in the year.”

The commercialisation of Pride Month, said Trimarchi, has also allowed corporations to exploit the LGBT+ community and pollute the environment for too long.

“Let’s forget about the stupid rainbow gadgets that brands are polluting the world with, appropriating a flag that doesn’t belong to them,” he said.

The main image is by Life Matters via Pexels.