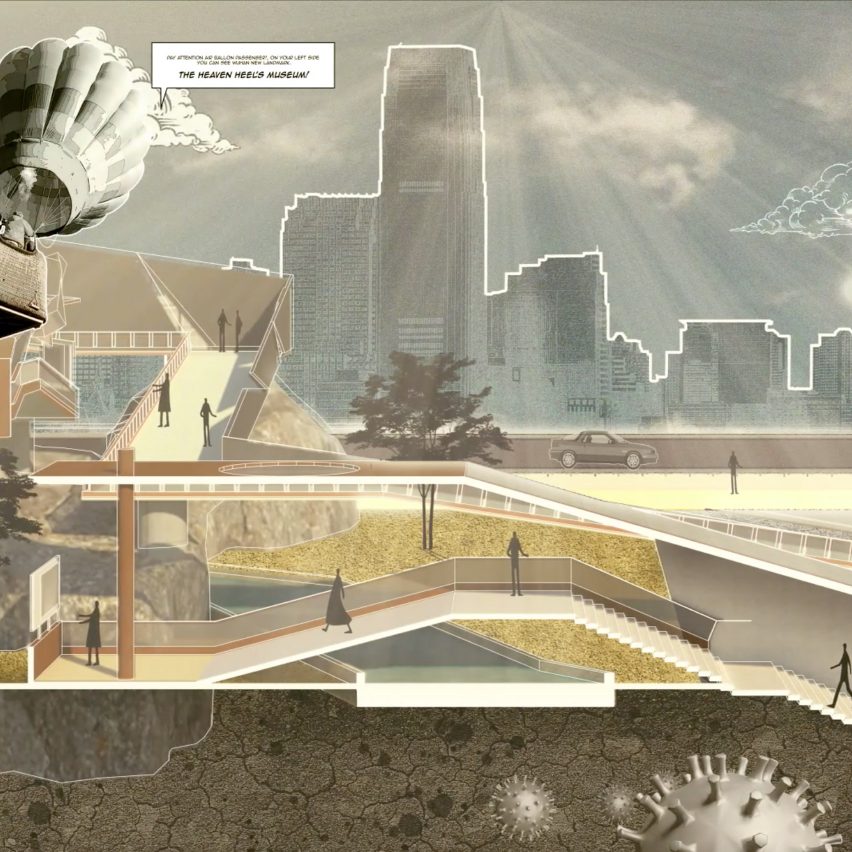 This VDF school show curated by the Architecture Department of the University of Indonesia includes a conceptual city masterplan modelled on neurons, and a museum memorial in Wuhan for reflecting on the coronavirus pandemic.

The digital exhibition features a total of 10 projects, documented in video form, which were completed by students in their final year at the Indonesian school as part of the Scarcity studio.

Scarcity was taught by Hendrajaya Isnaeni, Verarisa Ujung and Farid Rakun, and invited pupils to investigate the relationship between ecological plights and the world economy.

Architecture Department of the University of Indonesia

“Scarcity, as a term that problematises as well as bridges economic and ecological domains, challenges contemporary architecture and interiority.

“We deem deep comprehensions about underlying forces at work in understanding the term are necessary to deal with its complexities. The inextricable links between ecological plights and global economies, also the dynamics they create, need to be interrogated with intelligence and creativity.

“Consequently, understanding these conditions would heighten our conscience, our ‘value structures’. This studio is a result of attempting to articulate these ‘value structures’, and finding methods to operate them architecturally.”

“Jakarta is sinking fast. Its historical sites, and the memories embodied within, are at risk of destruction. Onrust Island, a memory bank spanning more than four centuries back, is one of them.

“This project speculates on an alternative: Onrust Island as a theme park. The park has six subjects, ten memory lands and thirty-five choices for the visitors to choose from.”

Scarcity of truth by Amani Tedjowongso

“The Corridor of Truth: reconstructing the reality of pollution.

“Pollution, as a current cultural construction, lacks agency, urgency and imagination. As a society, we outsource our responsibility to care to authorities and other bodies. Interrogating the agencies of an individual architect, this project attempts to change society’s mindset regarding urban air pollution.

“Intervening Jl Salemba Raya, one of the main roads in Central Jakarta, the project resulted in a network of infrastructures to purify the air and shift the use of fossil fuel to methanol. It yearns for change in people’s mindset and the lowering of egos.”

Scarcity of gratitude by Baihaqi Abdullah

“Sited in Wuhan, China, this architectural project tries to speculate on what would happen when future global citizens look back on the emotions they had experienced during the catastrophic COVID-19 pandemic in 2020. Turning fear to gratitude, this project shows how memorial could take form in a new era: post-pandemic.”

Changing the perception of scarcity by Chloe Nadine Mak

“This is a speculative project on Bajau – a tribe of ultra-national sea nomads – as one of many stakeholders of the disputed part of South China Sea. The starting point is the fact that Bajau is unified by their strong naval nomadic identity. It utilises fiction as an agent of cooperation, instead of conflict.

“This project also suggests that we all could learn from Bajau and their subsistence lifestyle and harmonious relationship with nature in order to sustain a longer, more abundant way of life.”

“In 2045, the year when Indonesia will celebrate its 100th year of independence, a new checkpoint emerges. On identity, lack of wisdom could lead to over-pride, fanaticism and anarchism.

“This project speculates on how future citizens of the country would reuse and reimagine Satriamandala, the main museum of Indonesian Armed Forces (TNI) in South Jakarta, into an architecture that narrates alternative readings on identity, where visitors are invited to knit their own understanding using their own experience.”

“The universality of standards of living, generalised by the process of modernisation, creates an illusion of scarcity of resources. We demand things that are not contextual to our living environment.

“Taking cassava as a potential main nutritional resource, the project further explores the possibility of extending the root’s values for materiality, metaphor and a new form of living, applied in the context of the Cilandak residential area in South Jakarta.”

“This architectural project imagines a system that synergises with its context in Kalimalang suburb of East Jakarta.

“This is done by applying the nervous system, translating them structurally in both macro and micro scale, consequently proposing new ways for humans to live, interact and obtain food in the future. The aim is for human beings to co-habitat earth peacefully with other living creatures.”

“This project comments on the possible outcome after Mayestik, one of the most vital markets located in South Jakarta, collapses as a result of the wasteful over-consumption of plastic.

“Considering plastic as a source of instability, the project then deconstructs and integrate this material into spatial elements to reveal the possible catastrophe and how the market could be dwelled in and by preaching instability.”

“This project imagines an intervention done upon an abandoned shophouse complex in 9 Walk shopping complex in Bintaro, a suburb of South Jakarta.

“In its current abandoned state, the site and building are left with hardscapes that the project utilises as materials to show how non-human species can gain their design agencies – becoming architectural co-conspirators and successively taking architecture back to nature.

“The designer’s role then is to research and design for the liveability of these non-human species while still producing experiences for human beings in an orderly fashion.”

Virtual Design Festival’s student and schools initiative offers a simple and affordable platform for student and graduate groups to present their work during the coronavirus pandemic. Click here for more details.