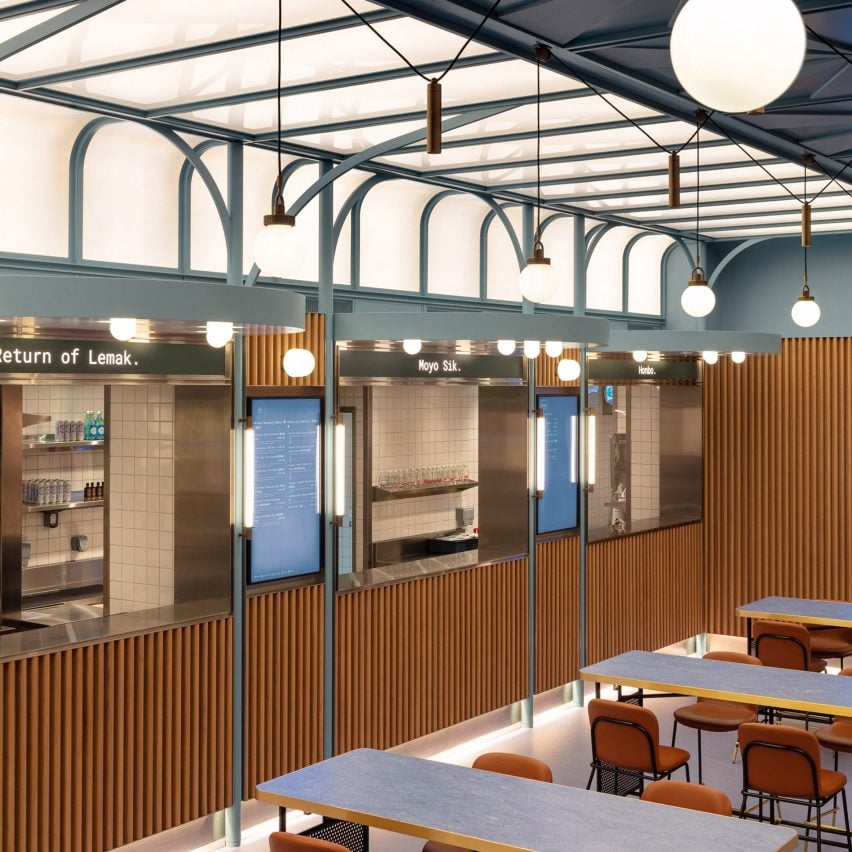 Films from the 1970s informed the aesthetic of Basehall, an upscale food court in Hong Kong designed by studio Linehouse.

Basehall is a food hall set within Jardine House, a 52-storey skyscraper in Hong Kong that’s punctuated by rows of circular windows.

Following its completion in 1972, the distinctive building was featured in a number of films. These early cinematic depictions came to influence Linehouse‘s interior design scheme for Basehall. 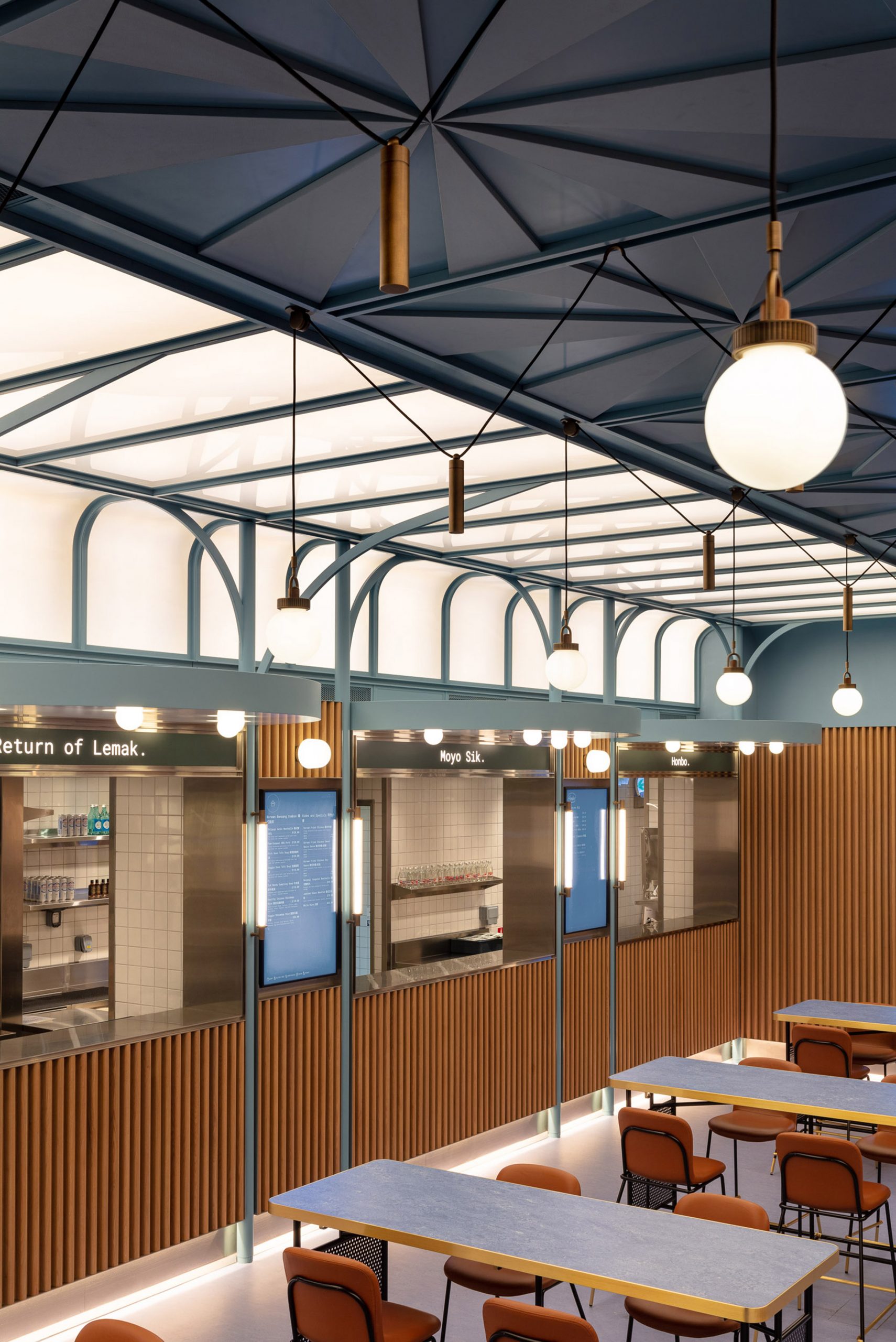 “Jardine House was a landmark on the Hong Kong skyline and the tallest building in Asia for several years,” said the studio.

“[Basehall] seeks to convey an atmosphere of nostalgia through its spatial arrangement and the use of materiality, lighting and detailing.” 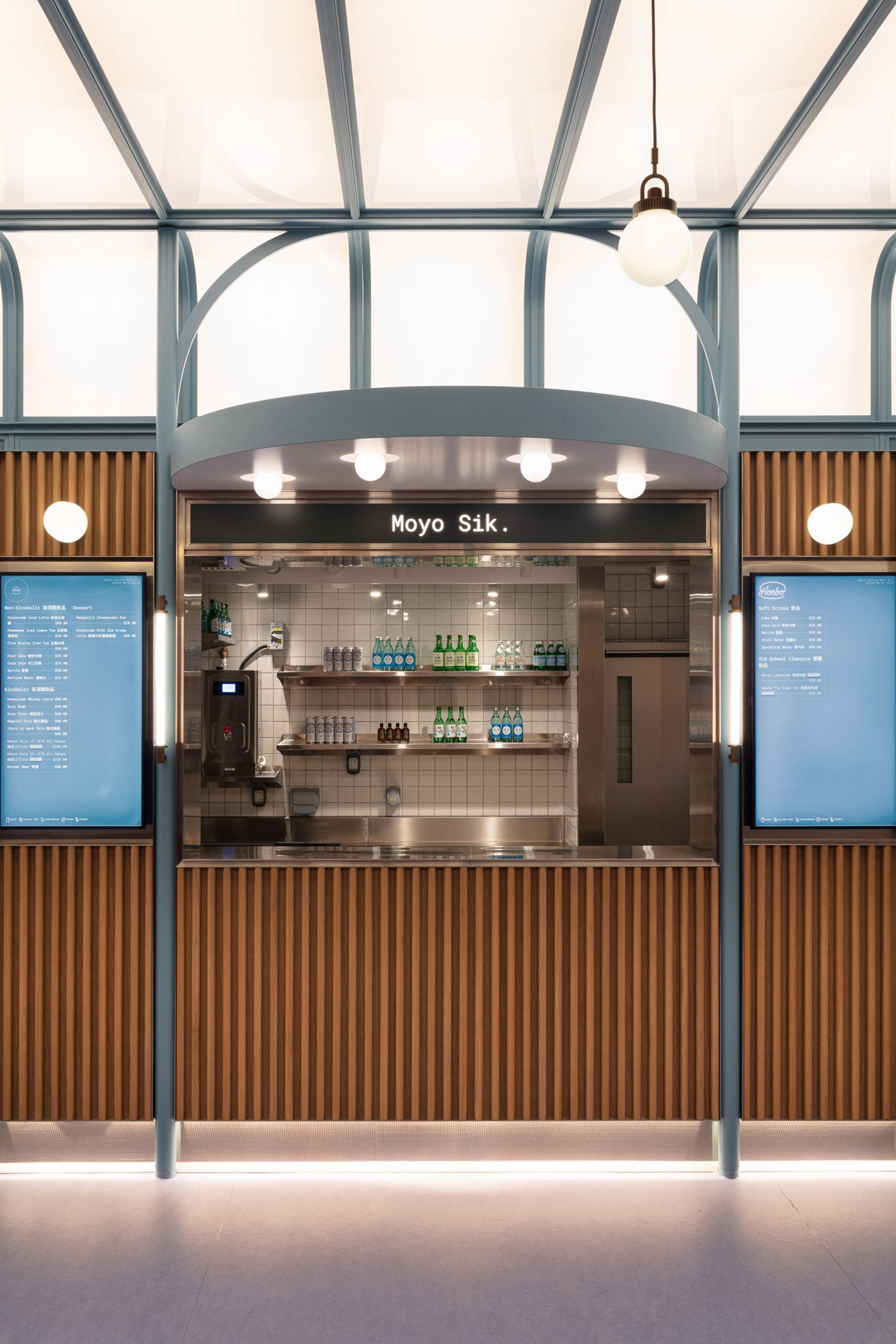 The hall is split across two levels, which are each designed to have their own distinct ambience.

On the ground floor is a bright and buzzing “market courtyard”, which offers treats from seven artisanal Hong Kong food vendors. Upstairs on the first floor is a drinks bar that’s intended to have a warmer and more intimate feel. A wall clad with rounded oakwood battens runs the length of the ground floor. It’s interrupted by a series of white-tile niches that accommodate the kitchens of the different food vendors.

Each niche is fronted by a powder-blue arched frame and a half-moon-shaped canopy fitted with spherical lights, matching the pendant lights that dangle from the ceiling.

Blue metalwork has then been created across the food hall’s backlit ceiling. 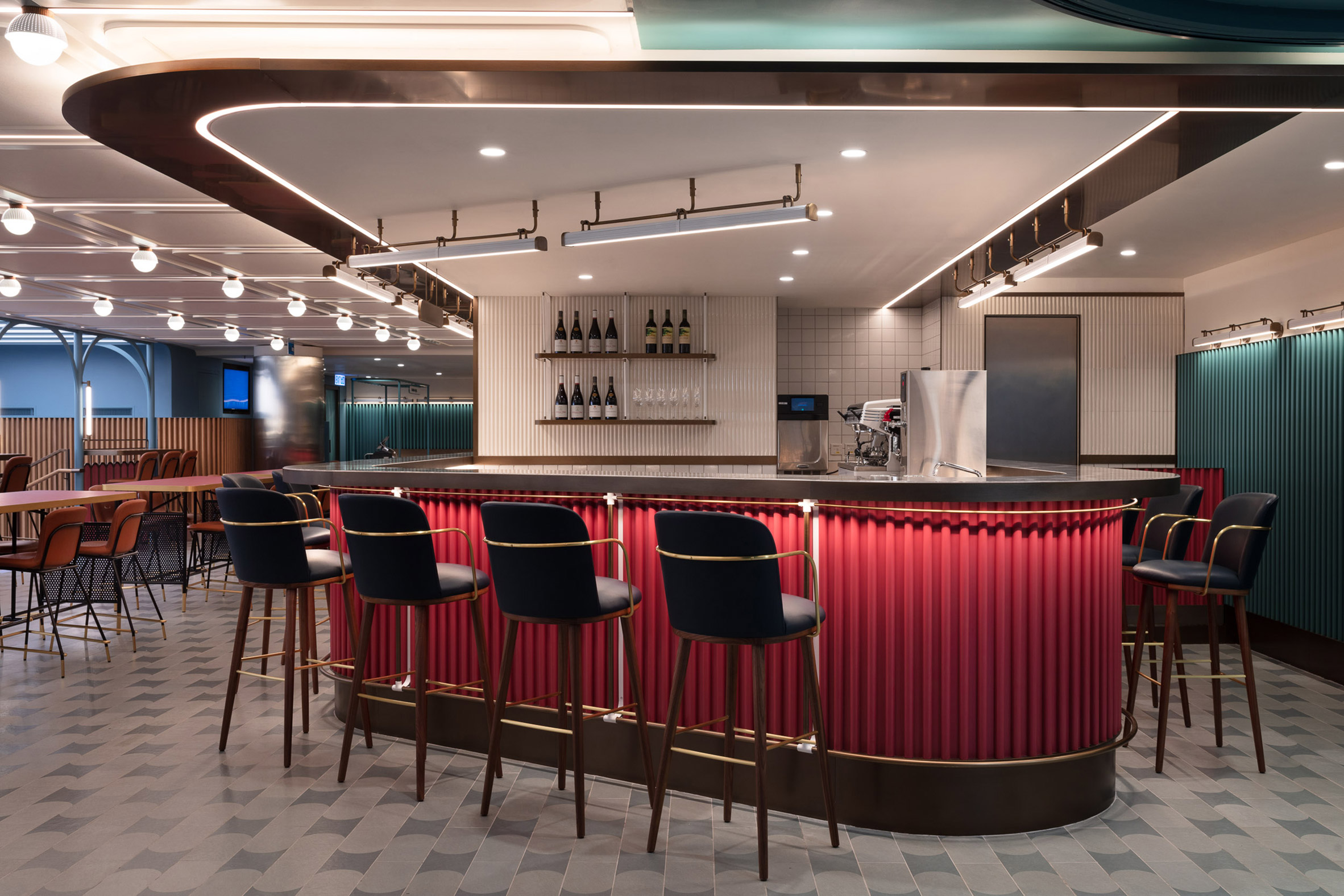 “The custom metal canopy ceiling is a highlight of the space and references traditional vaulted market hall structures,” explained the studio.

“Backlighting the diffuse glass also allows for shifting light qualities throughout the day and night, creating an interior-exterior space.”

At this level, there are also a number of mobile cashier carts and even a moveable DJ booth so that the space can easily be reconfigured to host live music events or performances. 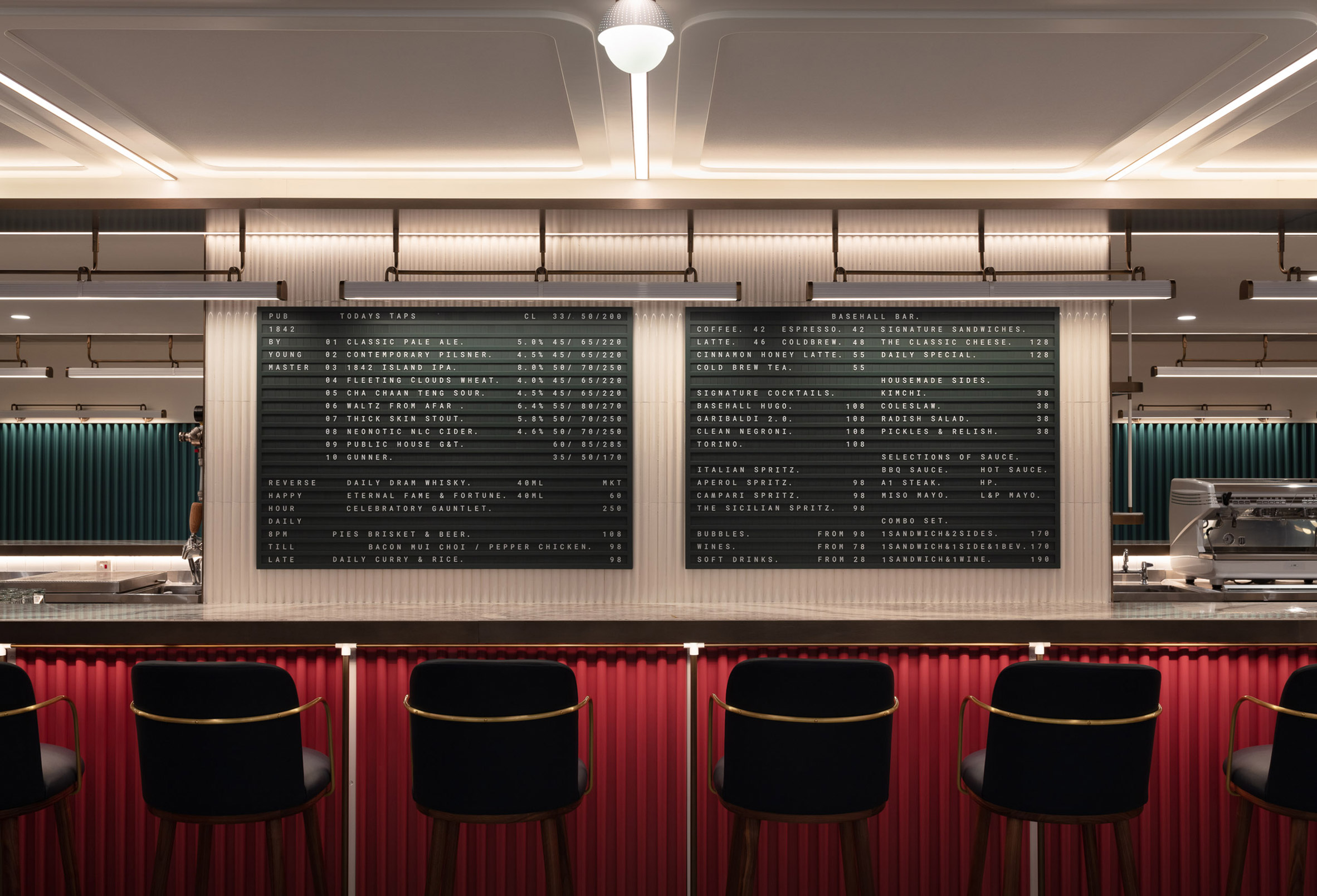 Its surrounded by black highchairs with slim brass armrests where guests can sit to watch the mixologists at work. Down the centre of the space is a sequence of red brass-edged tables, while at the rear of the room is a green leather seating banquette set up against a grooved teal-blue wall.

There’s also a row of orange seats directly behind the first-floor balcony balustrade offering views over the bustling crowds in the food hall below. 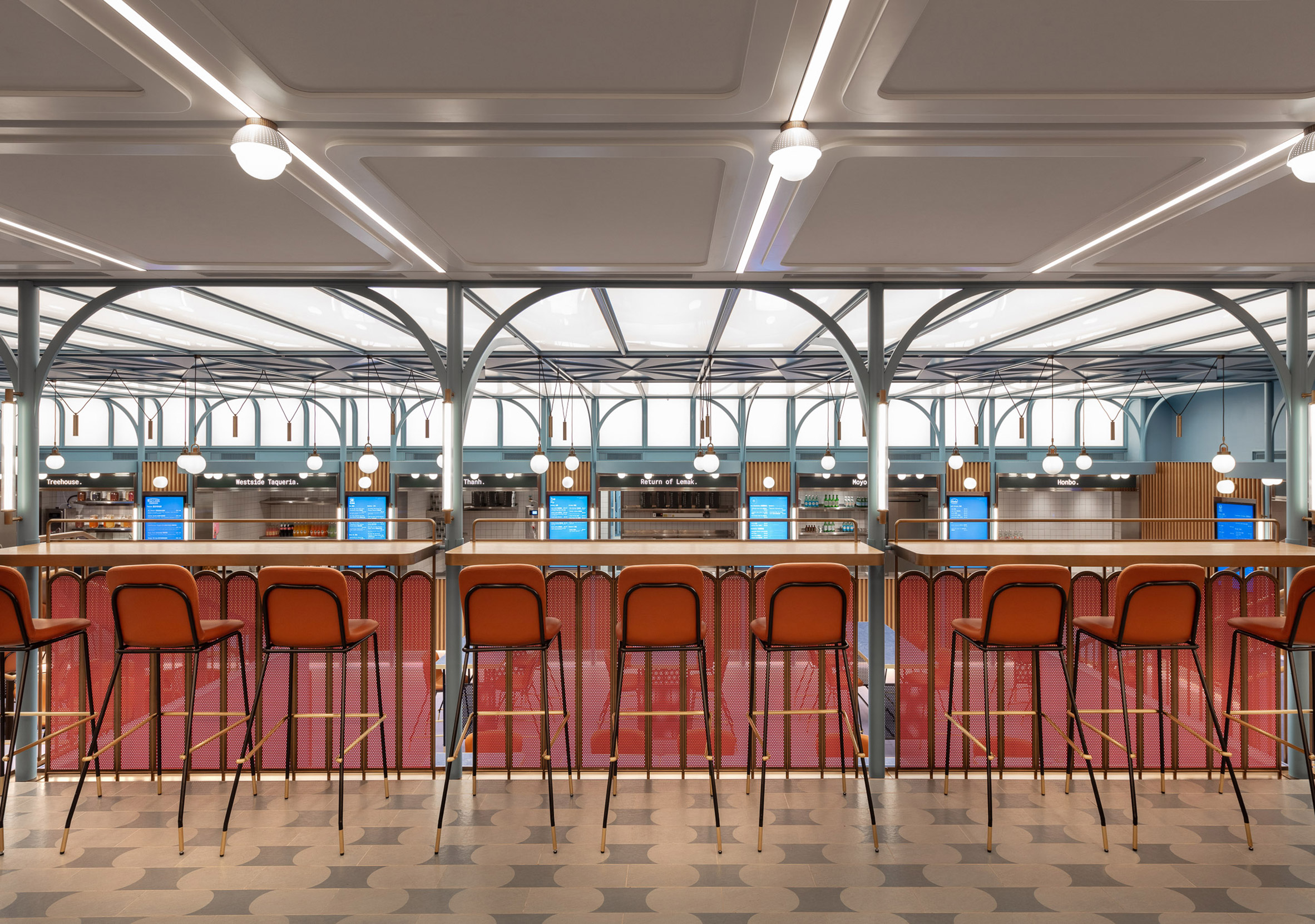 The colours applied throughout Basehall appear again in the venue’s bathrooms, which feature blue terrazzo floors and sink basins.

Walls and the inside of toilet cubicles have been lined with 1,750 pink-painted recycled metal rods. 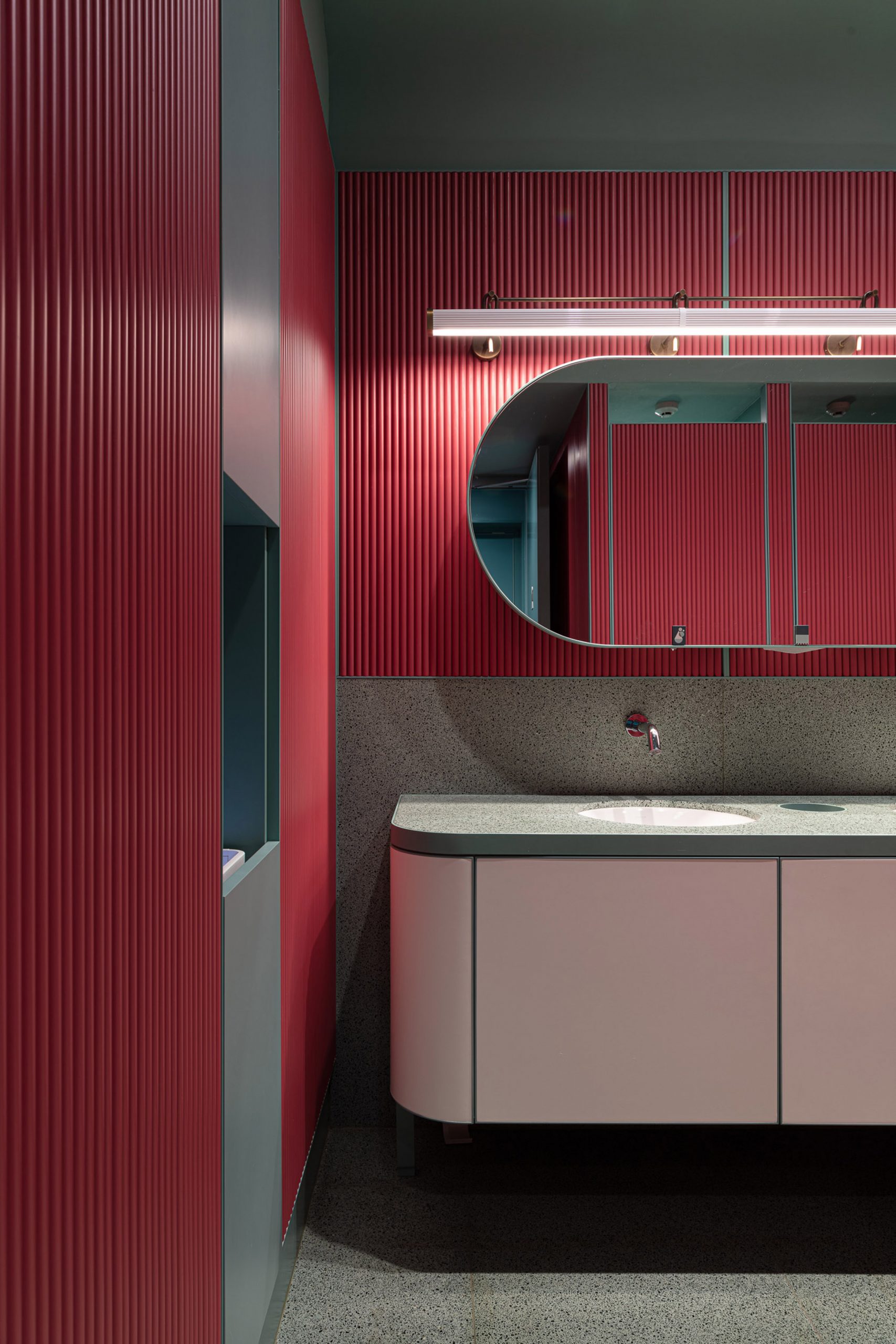 Linehouse was founded in 2013 by Alex Mok and Briar Hickling, and has offices in Hong Kong and Shanghai.

This isn’t the first dining spot that the studio has designed in Hong Kong – in 2018 it completed John Anthony, a dim sum restaurant named after the first Chinese-born man to be naturalised as a British citizen.

Inside, the restaurant has been decked out with materials that Anthony would have encountered on his initial journey to east London, like glazed tiles, terracotta and hand-dyed fabrics.

Photography is by Dennis Lo.