Home/Before and After – My Swedish Home Makeover!

Before and After – My Swedish Home Makeover! 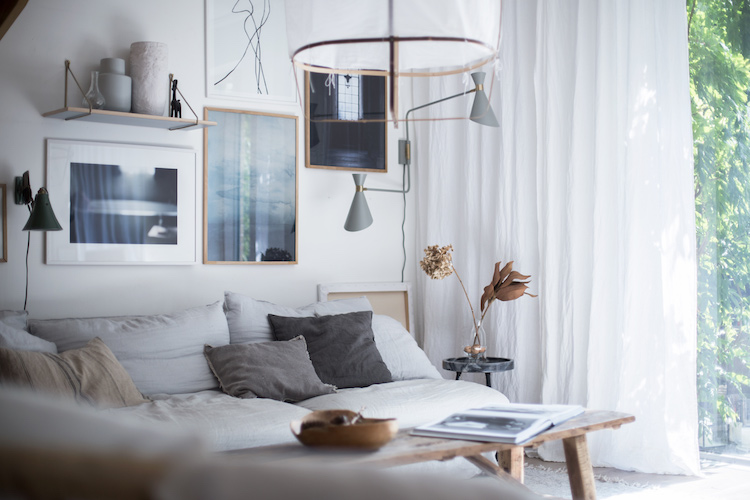 Last night I was clearing out a cupboard and came across the estate agent pamphlet for our house from when we bought it. I knew we’d made some changes over the 12 years but looking back at the pictures made me realise just how far we’d come! At the time, we were living in a small apartment just down the road and when the house came on the market, we knew it would be perfect for us, but it was over budget. And then we had a stroke of luck. No one wanted it!! Being a consistently ‘hot’ house market, this was incredibly unusual in Malmö, particularly in a popular area by the sea – where homes tend to sell within weeks, if not days. The estate agent explained that potential buyers had turned their noses up at it, saying it ‘didn’t have the right feeling’.
When Per and I went to view the property, we understood what they meant. No one lived there (it was used as an occasional city bolthole by a businessman who had a permanent abode in the countryside) and the living space lacked soul. In addition, it featured some pretty questionable decor choices…. and the dark wood wall and floors made the entire space really dark. It felt gloomy and somewhat depressing – hardly a home to aspire to! The price dropped dramatically and became within reach (although still a stretch!). Despite the appearance, we could see its potential, and would be mainly cosmetic. Plus, it meant acquiring a house in the area we so loved! We jumped at it!
I’ll never forget finally getting the keys in our hands and our first night in the house. I simply couldn’t believe it was ours! Twelve years, two children and multiple interior changes later, we’re still just as happy in our home today.
Here’s how it has changed over time:
Kitchen / Dining  Before 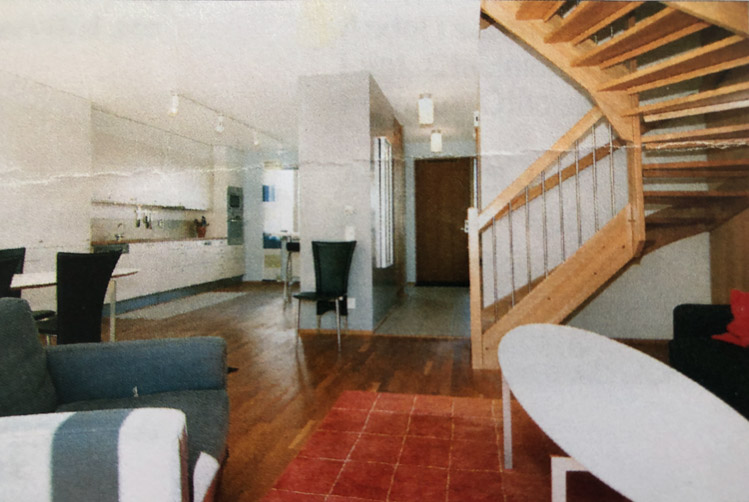 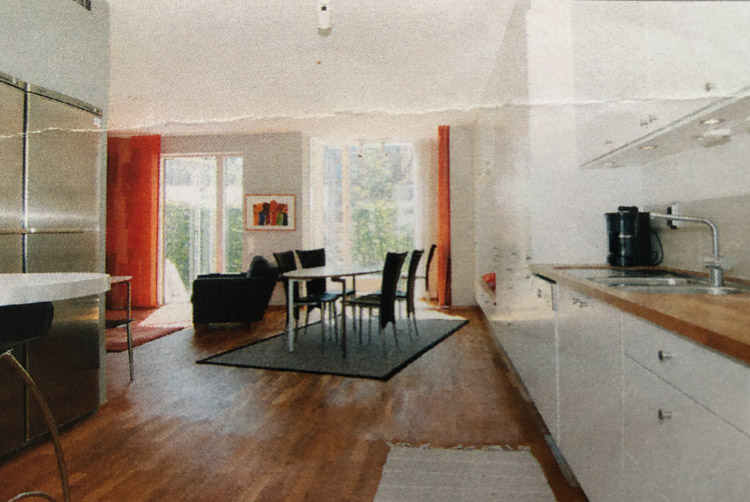 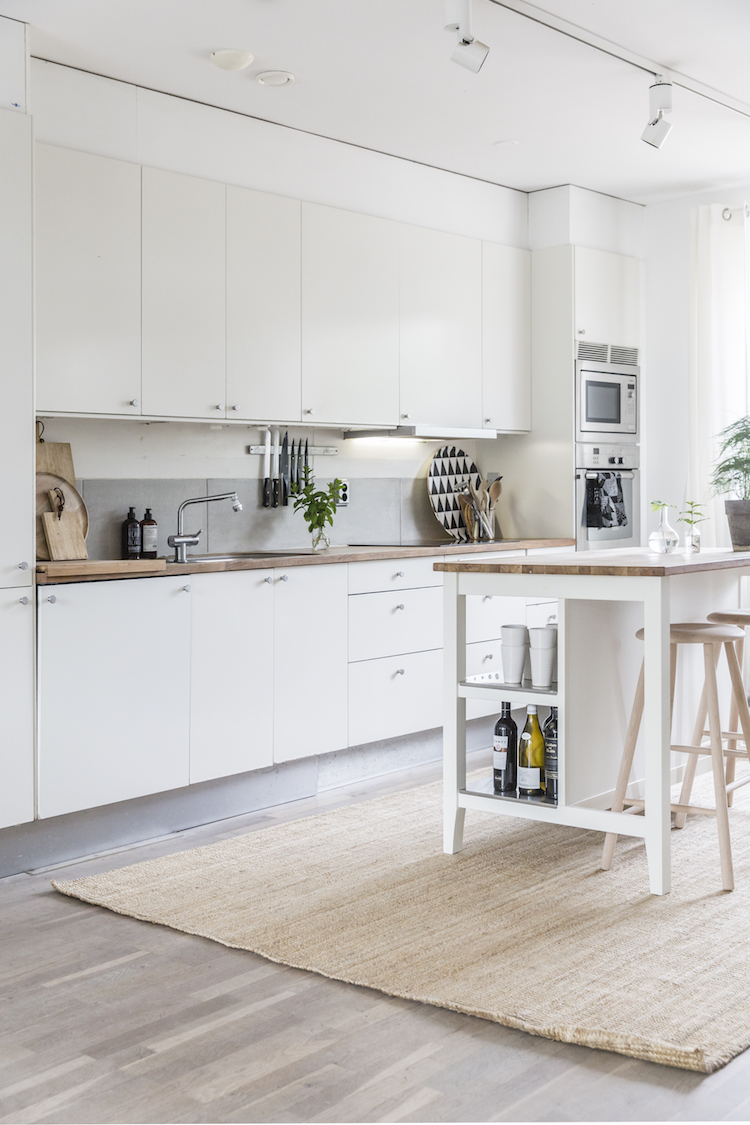 The very first thing we did was give the entire house a lick of fresh white matt paint (with the help of parents Father and Stepmother!). It would serve as a blank canvas until we decided which way to go in terms of colour. Many of the walls remain white today, although we’ve added some deeper, earthy shades in some parts of the house.
We also got someone in to sand down and whitewash the oak floors which immediately lightened up the entire living space.
We loved the existing Marbodal kitchen units and backsplash – they’ve served us well over time. We kept them and instead focused our attention on installing better appliances such as an induction hob and new fridge and freezer. 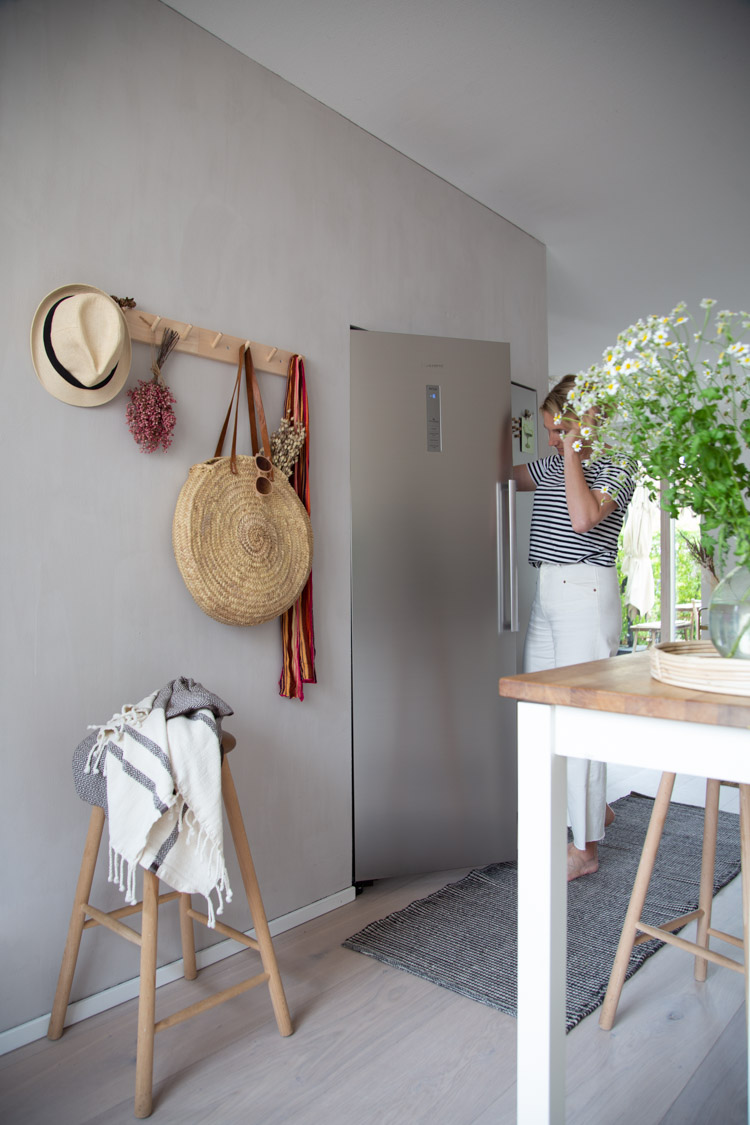 The kitchen lacked work surfaces, so we added a new kitchen island (there was one when we arrived but it was tiny – you can see a glimpse of it here). The unit is just from IKEA but one of those pieces that fell into place and felt like it had always been there!). It’s become a popular gathering place (not only for people – but also the daily post, keys and even sports equipment as the kids fly in through the door – yes, it drives me insane!). But it DOES look lovely on the occasional times it’s clear (or better still, has a G+T on it!). 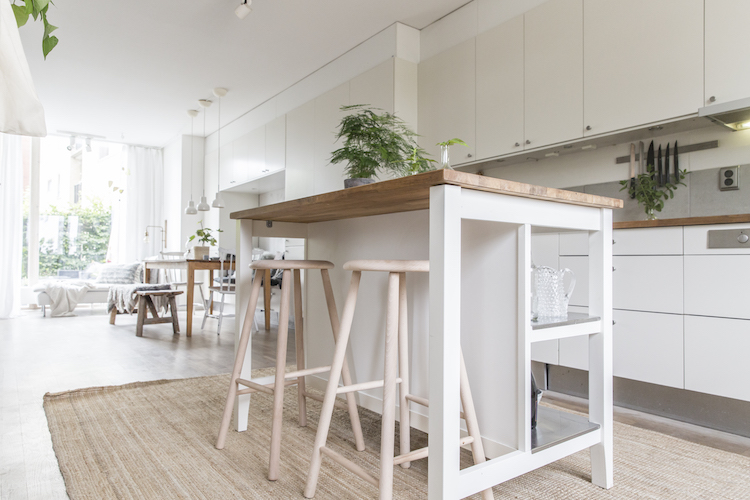 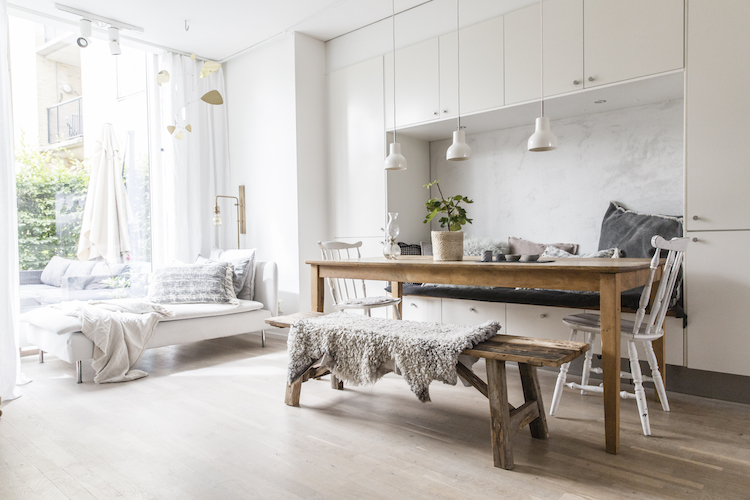 Per has owned the wooden dining table for years. it’s made of solid wood so can be sanded down and restored whenever the need arises. It’s a really timeless piece and something I can imagine always having in our home. There’s no marking on it sadly, so we’re not sure of the brand.
We transformed the corner into a reading nook, which has become one of the most popular places in the home – and means we can all relax in the same room, while doing our own thing! At Christmas the daybed is placed in the attic and replaced with a tree! Years back, we even had a bubble chair hanging in that corner! 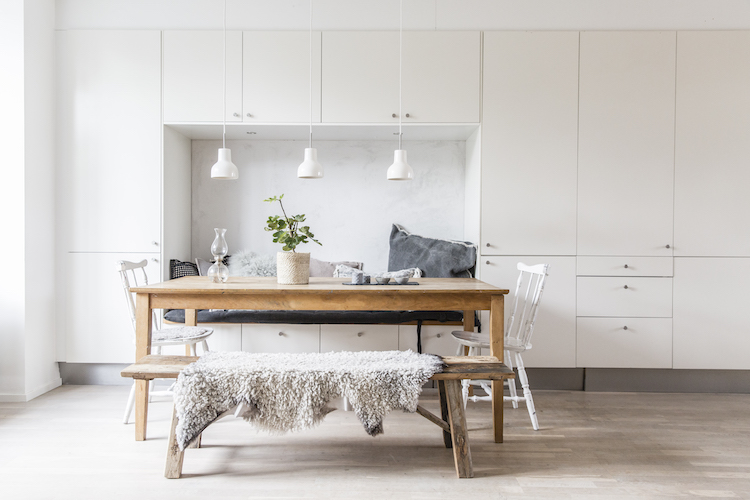 All the storage was in place when we moved in, and as a family of hoarders, we’re still grateful for it. We’re unsure what they had planned for the recess – maybe a TV? But it serves as a great, cosy dining seat nook today! 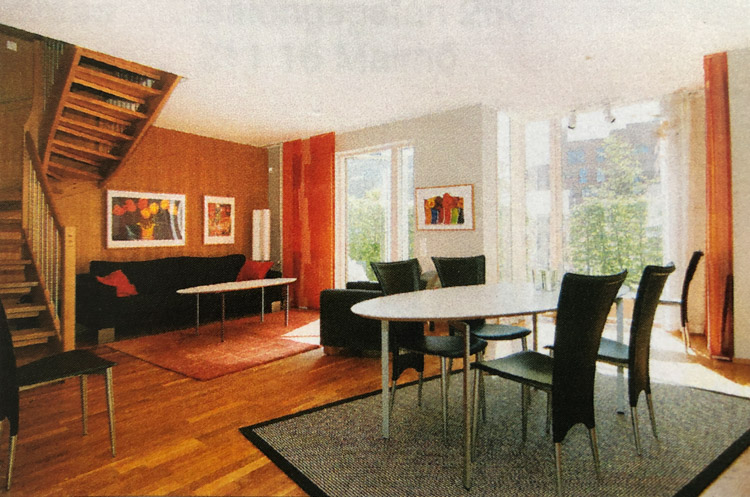 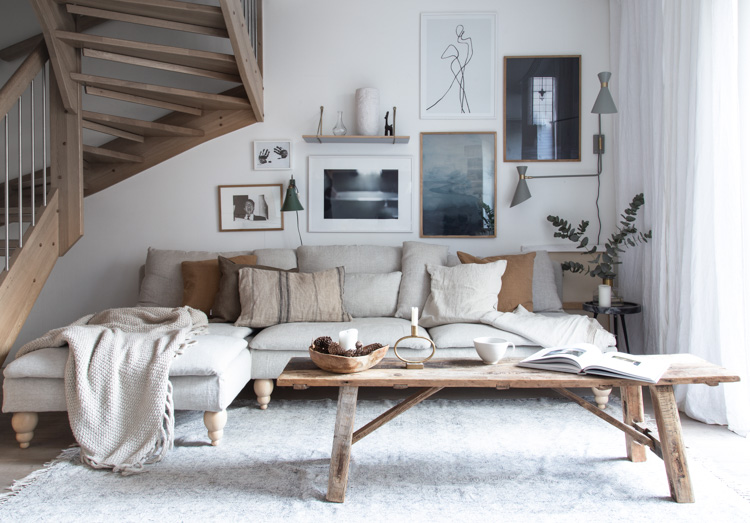 I’m not opposed to dark wood walls – they can look fab in a 50’s style residence. But since the house is overshadowed by an apartment block, it can get really dark in the afternoons. Painting the wood white immediately lifted the entire living room area.
For the first few years it looked like this – and then later we changed the sofa (the cover of which is constantly updated thanks to Bemz – you can check out the many transformations here and here) and added a gallery wall. 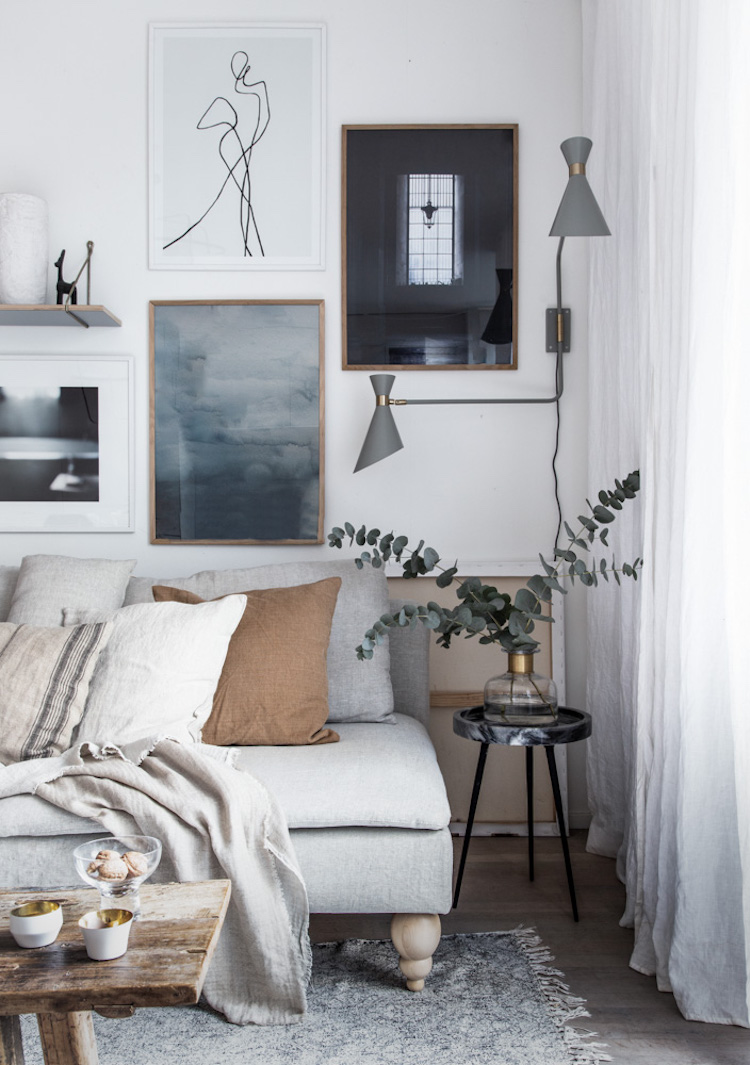 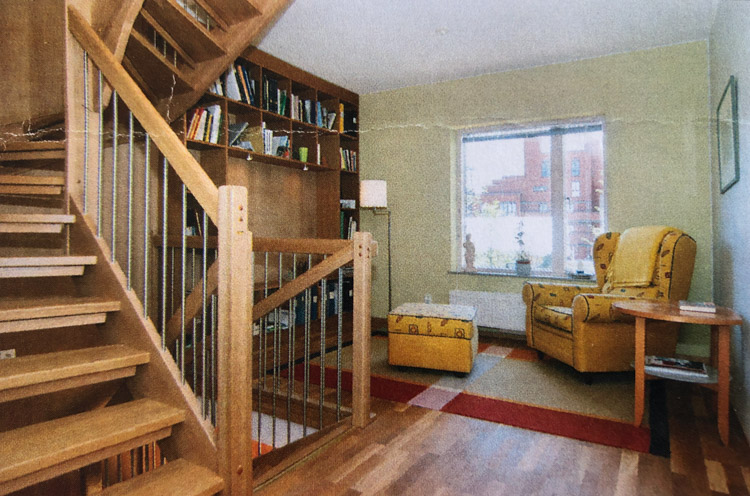 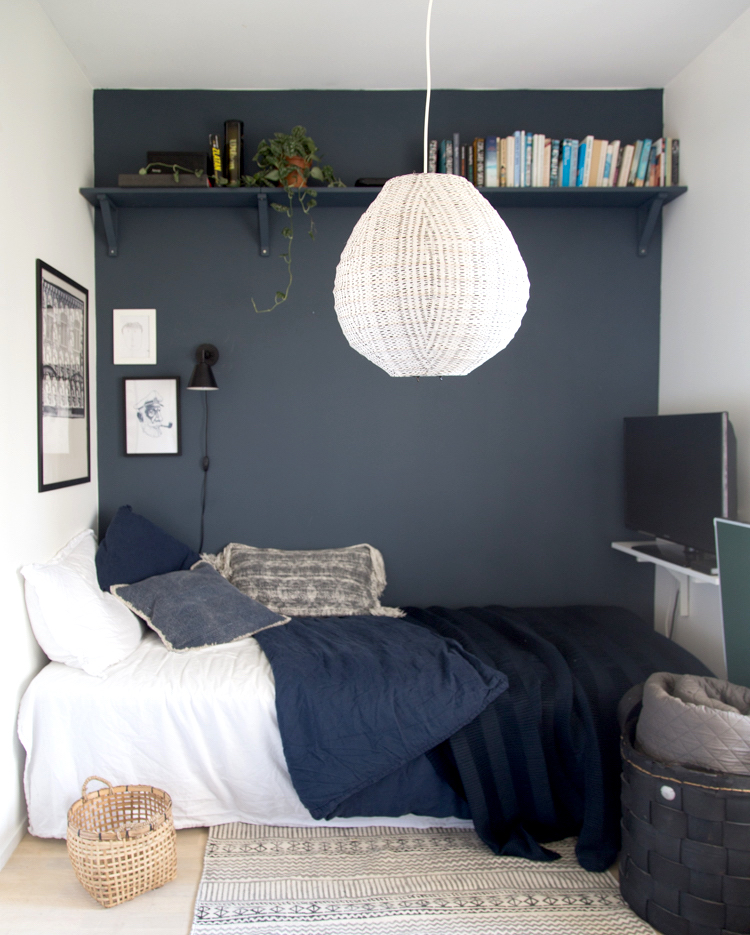 Confused?! As much as we’d loved to have had a second sitting room, we needed the extra bedroom. So, Per and a friend built a wall (on the opposite side of the wall from the pillow end of the bed are the stairs) – creating an extra bedroom for my teenage stepson. We removed the shelves to make room for the bed and painted the wall a cosy dark blue! See the complete make-over here!
Second bedroom before 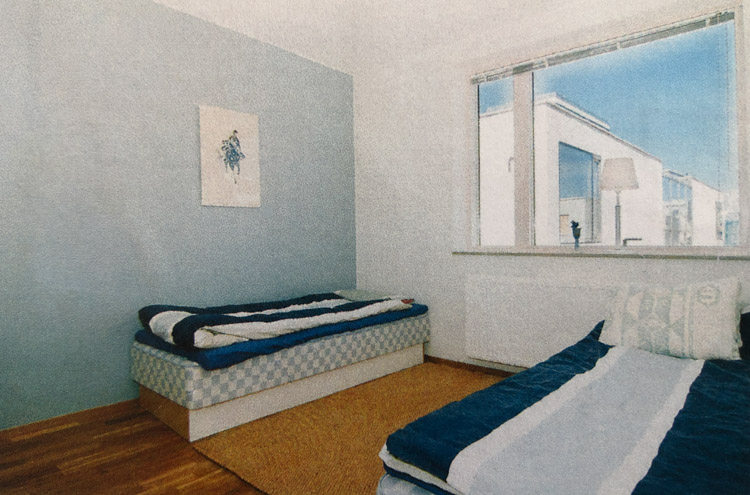 Allie’s bedroom has changed many times over the year – and will no doubt change countless times more as she grows! The original blue shade felt really cold in a North facing room. The first change we made was to paint them a fresh white (as seen here when the girls shared the room when they were small). We later painted the walls a more earthy, warm shade to add a cosy feel when Liv moved into her own room. I shared the DIY make-over here. 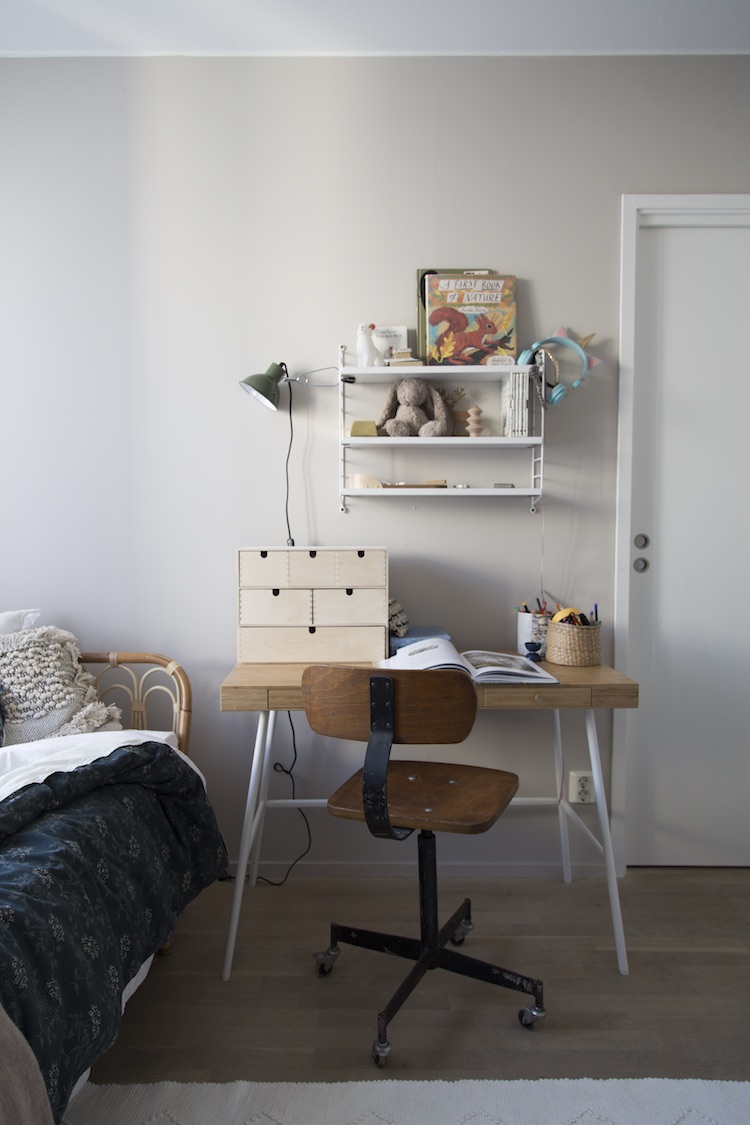 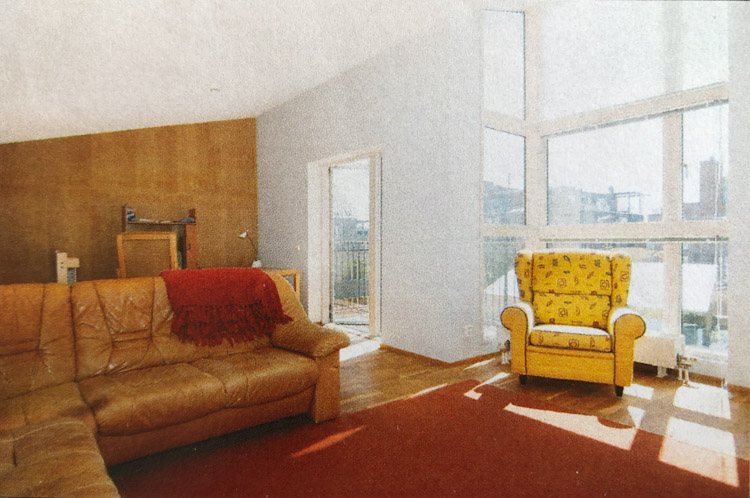 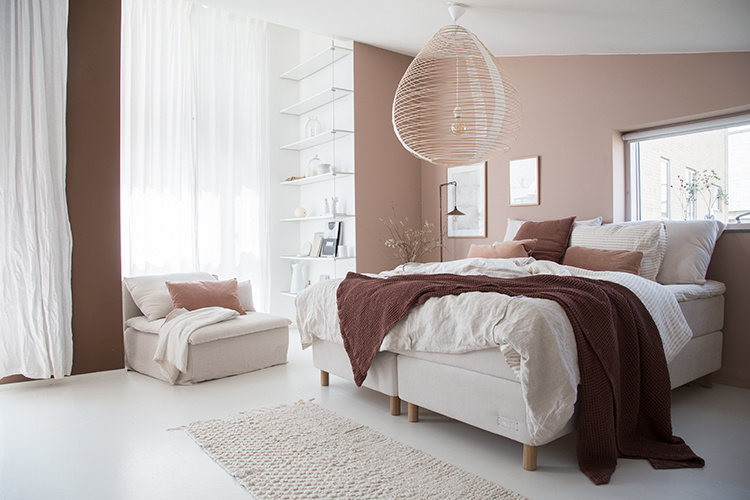 The top floor was originally a sitting room – and we kept it as such for the first few years. But slowly we realised no one was using it – which was a real waste as it’s one of the most beautiful, light-filled rooms in the house. So, we transformed it into our master bedroom and home office. And never looked back!
When we first moved up there the walls were white – as seen here. 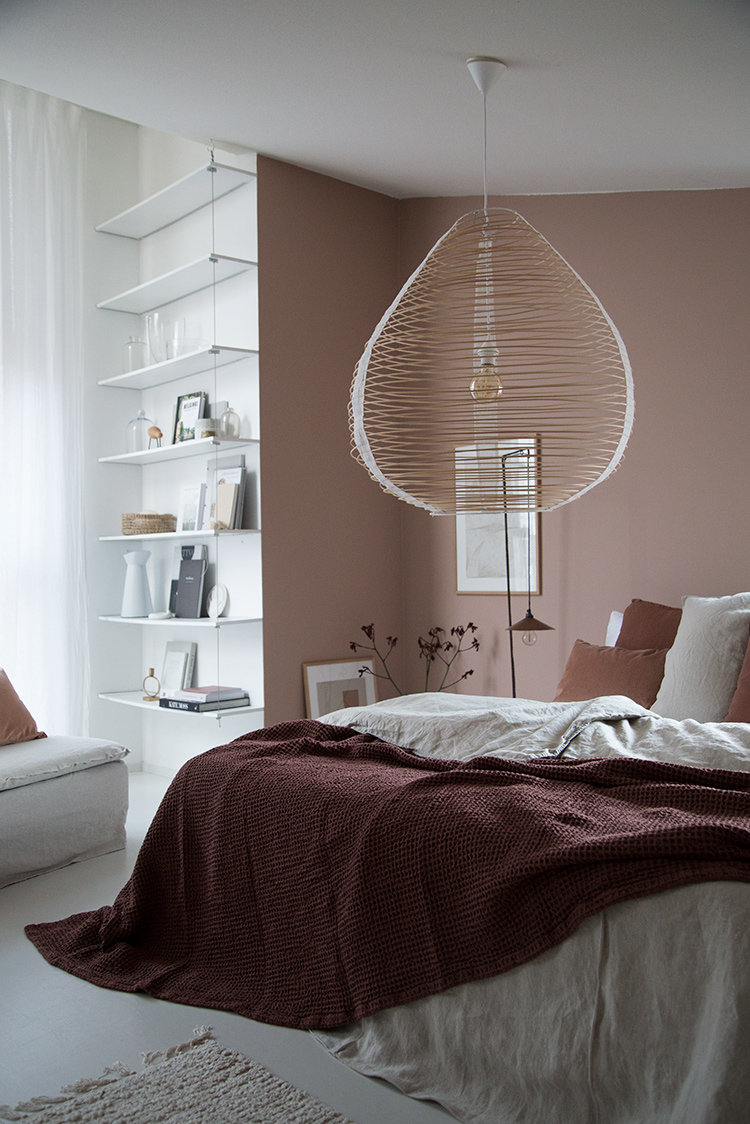 It’s been various shades over the years. For now, we’ve settled on ‘blushing peach’ by Jotun Lady, which has a wonderful, calm and cosy feel. 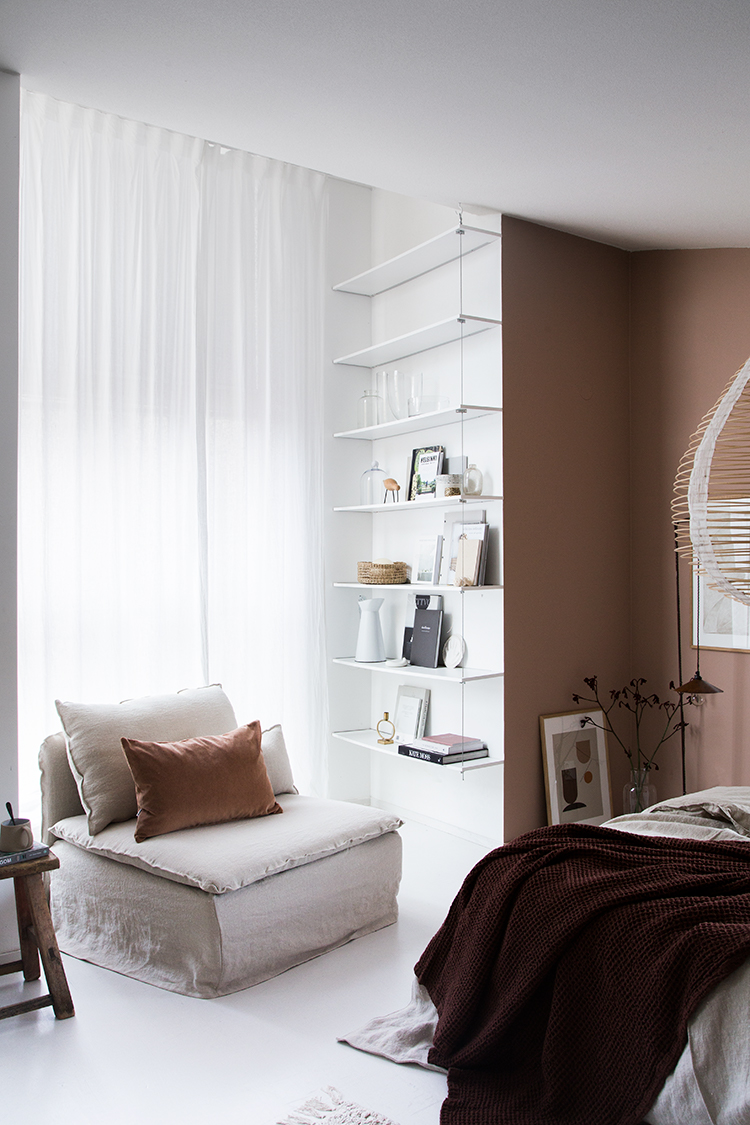 We painted the wood floor ‘strong white’ by Farrow & Ball (which is actually more of a pale grey). Per designed and built the shelves using planks, wire and nuts and bolts from a local hardware store.
I sometimes use the corner of the bedroom as my home office when I’m not at the studio (seen below). Today the wall is dark brown (‘Norwegian Wood’ by Jotun Lady) but it has also been white (you might recognise it from the front cover of interior book ‘Everything In Its Place’!).
We also transformed the nook (above) into a home office for Per during the pandemic – here’s a glimpse!
The entire room has become a real haven – and like a mini apartment within a house. We love it! 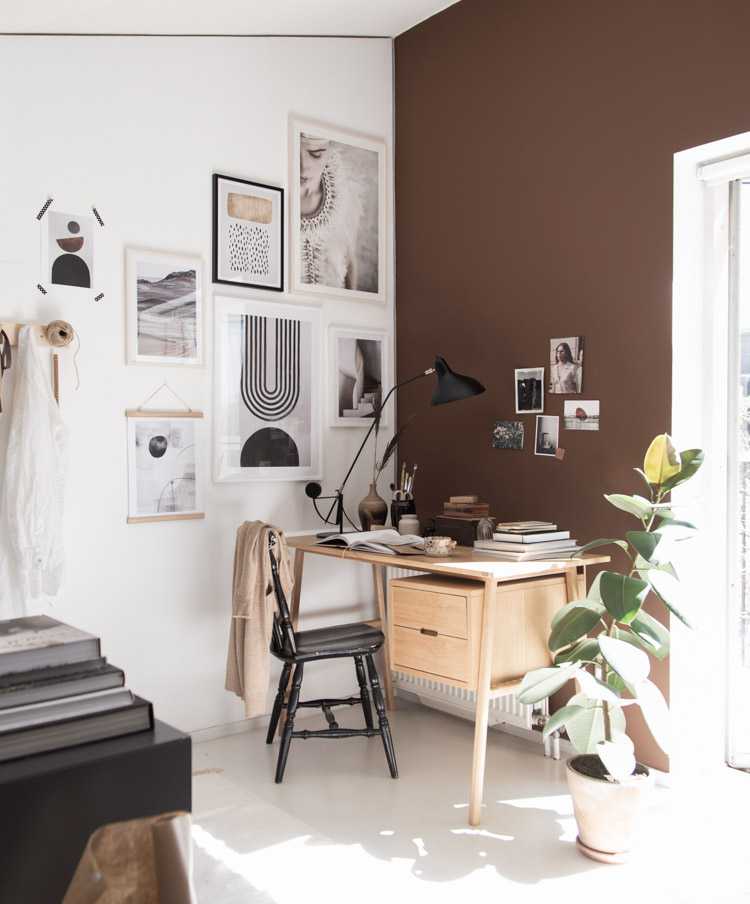 I have to say, it’s been so much fun to take this trip down memory lane, thank you for humouring me!
When I have days when I wonder why the progress in our house is so slow (there’s a reason I’ve never shown our bathrooms! – potential project for Autumn, perhaps? Don’t tell Per just yet…!), I’ll look back at these and see how far we’ve actually come!
Our house buying decision also taught me an important lesson. At a viewing, take into account the basic bones of the property (the shape, the era etc.). Don’t let the ‘feeling’ or ‘soul’ put you off. That’s something you can add once you move in!
If in doubt, check out the before and after archive, it’s quite incredible how much you can change a property with a little vision, time, effort and money. And some homes, like mine – might just need a lick of paint!
Don’t believe me? Here are some of my favourite ‘before and afters’ of all time:
A welding plant becomes an incredible family home and wedding venue
A run-down property becomes a beautiful Swedish house
A dated cabin becomes a modern Scandi-inspired bolthole
A run down flat becomes a stylish London pad
Before and after: a dreamy beach house on the Gold Coast
I’d love to hear the story about your home – how you found it, how it felt to finally get the keys in your hand (whether as a renter or homeowner), and any changes you’ve made!
Niki