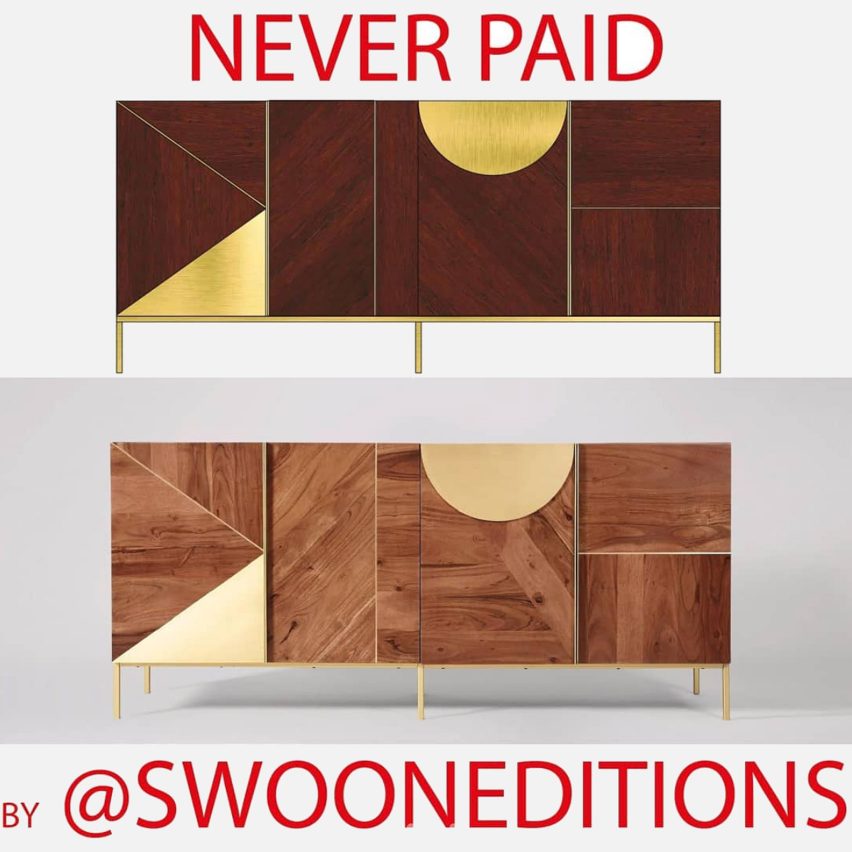 UK furniture brand Swoon Editions has apologised to London designer Simone Brewster after producing one of her designs without her knowledge and without paying her.

Swoon Editions co-founder Debbie Williamson apologised to Brewster after the designer noticed the brand was selling a cabinet she designed as part of a freelance assignment. Swoon Editions and Brewster are now negotiating payment and compensation.

“This morning I posted a public apology to Simone Brewster on the Swoon Editions social channels,” said Williamson in a statement issued to Dezeen.

“Both professionally and personally, I wanted to ensure that Simone and the wider design industry know that we really value the designers who work with us and that when our processes fall down, we take responsibility and we put it right.”

“I felt taken advantage of”

The apology comes after the London-bassed designer and artist took to social media to call the company out for exploiting her work. In a series of Instagram posts, Brewster explained how she had been invited to do freelance work for the brand in 2018. The designer agreed that she would only receive payment for designs that were put into production.

“I took on the work and after working with Swoon, handed over the designs, but never heard anything back, and assumed the pieces were not going into production, and so I would not be paid,” she wrote.

“But this January I was shocked to see the pieces for sale on Swoon’s website. I felt angry and taken advantage of. The designs had gone into production without me ever receiving a word or a penny.”

Williamson attributes the misconduct to the company’s processes having “fallen down”, and states that its operations need to be improved.

“It was an issue with the payment process”

According to the furniture brand, which was established by Williamson and Brian Harrison in 2012 to sell design-led furniture online, the non-payment and lack of contact was due to an issue with how it pays its designers.

“In this instance, it was an issue with the payment process and we are working with Simone’s lawyers to sort this out and ensure Simone is paid the fee we agreed with her and compensated,” said Williamson.

According to Brewster, who specialises in furniture and jewellery design, Swoon Editions agreed to pay her a flat fee for each design it used.

“I was told that for each design that went into production I would receive a flat fee,” she wrote on Instagram. “If the designs were unsuccessful I would unfortunately not be paid. I was never presented with a physical contract.”

“I saw it as a great opportunity to expand my portfolio, and see how the big guys did things,” she added. “Also, I was confident in my ability to design something worthwhile, so I said yes.”

Brewster did not receive “any form of recognition”

According to Brewster, she submitted her final designs on 1 July 2018 and was told by Swoon Editions that she should hear back by 4 July 2018, which did not happen. After receiving no further contact from Swoon Editions, in January 2020 Brewster came across her designs for sale on its website.

“Before I knew it I was looking at a real-life manifestation of the designs I had handed over in 2018,” she wrote.

“I felt angry and taken advantage of,” she added. “The designs had gone into production without me ever receiving a word or a penny.”

In response, the designer enlisted the help of a lawyer and was reportedly offered a settlement from Swoon Editions that was less than what she had paid in legal costs. Rather than take the offer, Brewster decided to post about the situation on her social media accounts.

“If the case went to trial, not only would I have to find further money for my own significant legal fees, but could also be liable for up to £50,000 for Swoon’s legal fees if I lost,” she said.

“I, therefore, agreed with my lawyer to take a different route. So I reached out to my network of friends and contacts within the design world to share my experience on social media.”

The company has now removed her designs from its website until the issue is resolved.

This is not the first time a company has been called out for using a designer’s work without permission. Earlier this year, Sulafest music festival in India apologised to British designer Morag Myerscough for copying her colourful pavilion design, while Nirvana sued Marc Jacobs for using its smiley face logo in a fashion collection.

In 2018, Swiss fair Art Basel filed a lawsuit against Adidas for using the event’s name and branding without permission on a limited-edition pair of trainers.

The post Swoon Editions apologies to freelance designer after producing her work without paying her appeared first on Dezeen.