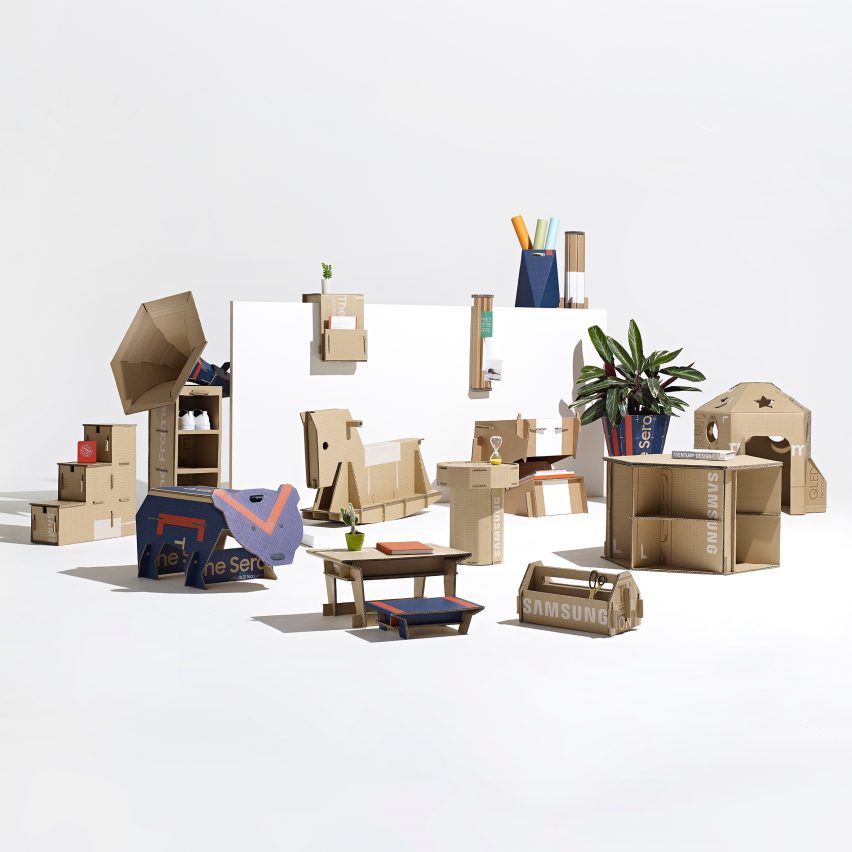 Innovative storage solutions, children’s toys and a music amplifier are among the designs made from repurposed cardboard that have been shortlisted in Dezeen and Samsung’s Out of the Box Competition.

The contest sought innovative designs for the home that can be made by repurposing cardboard packaging, to encourage users to creatively reuse the box their television is shipped in rather than throwing it away.

With many countries in lockdown, the competition provided people with a creative challenge they could undertake at home. Interest in the competition was extremely high and we received over 1,500 entries from 82 different countries around the world.

In total 15 designs have been selected for the shortlist, which are set out below in the order in which the entries were received. From this shortlist, the jury will select five finalists, which will be announced in August, before the overall winner is announced in September.

The competition was inspired by Samsung‘s Eco-Packaging concept, which aims to reduce waste by providing customers with a way to repurpose its television packaging into new household items.

Each design has been built using Eco-Packaging boxes for Samsung’s The Sero, The Serif and The Frame televisions. We have published photographs of each of these builds alongside a lifestyle image featuring a prototype of the design made by the entrant at their home.

Studio photography is by Benjamin Swanson with set design by Jam Studios and retouching by The Wizard Retouch.

Here are the shortlisted designs: 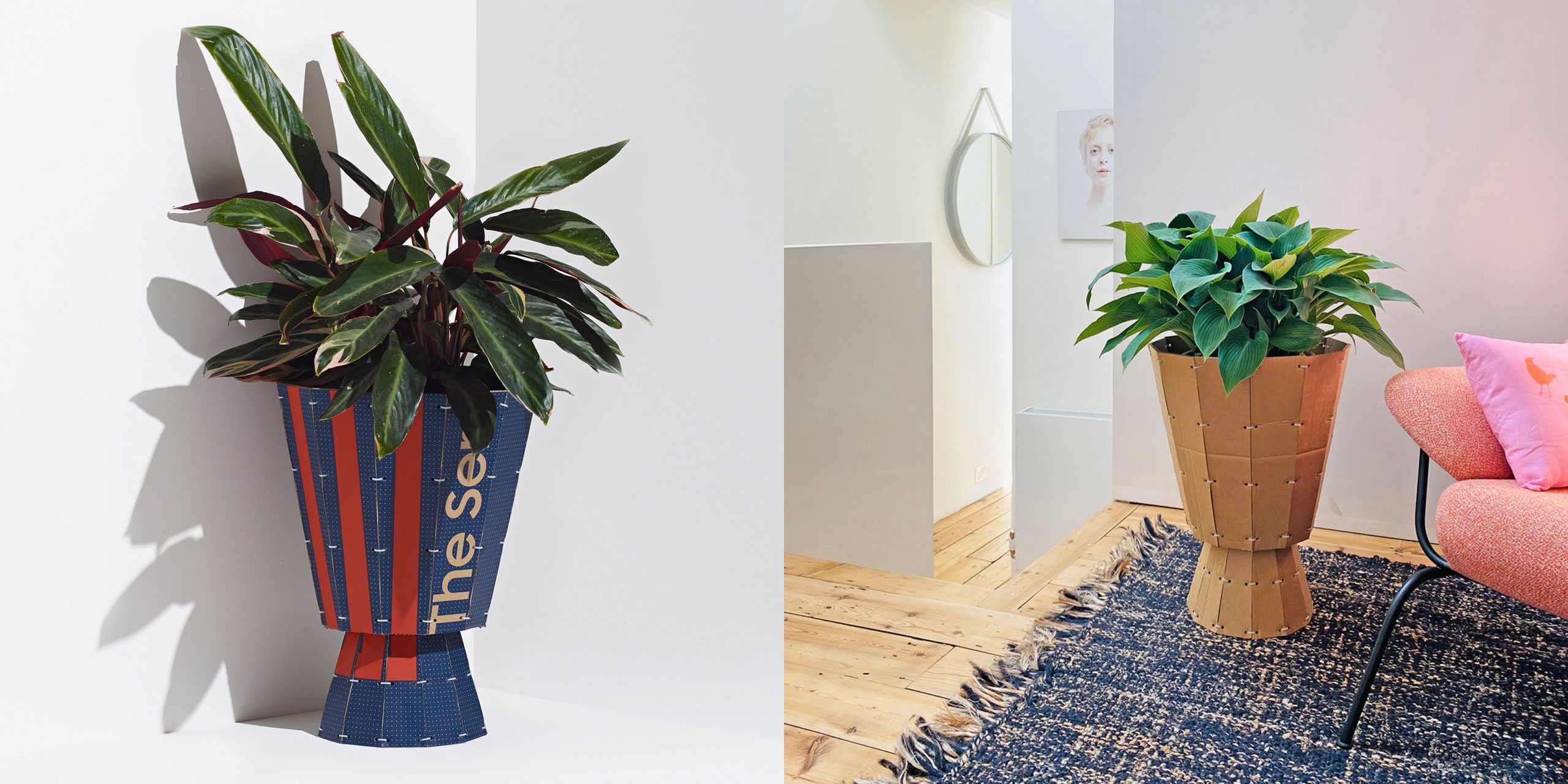 Gio is a faceted, multi-functional container comprising two tapered cylindrical volumes of different sizes. It can be used as a plant pot, a small side table or a storage container.

Each volume is assembled from 12 cardboard panels, which the user can bind together with string or ribbon to provide subtle decoration.

“Multiple elements can connect the pieces depending on what may be available,” said Francesco Pierazzi Architects. “String, ribbon, cable ties, or any combination of those will ensure an outcome that is unique to one’s household.”

The design has been built using The Sero Eco-Packaging box. 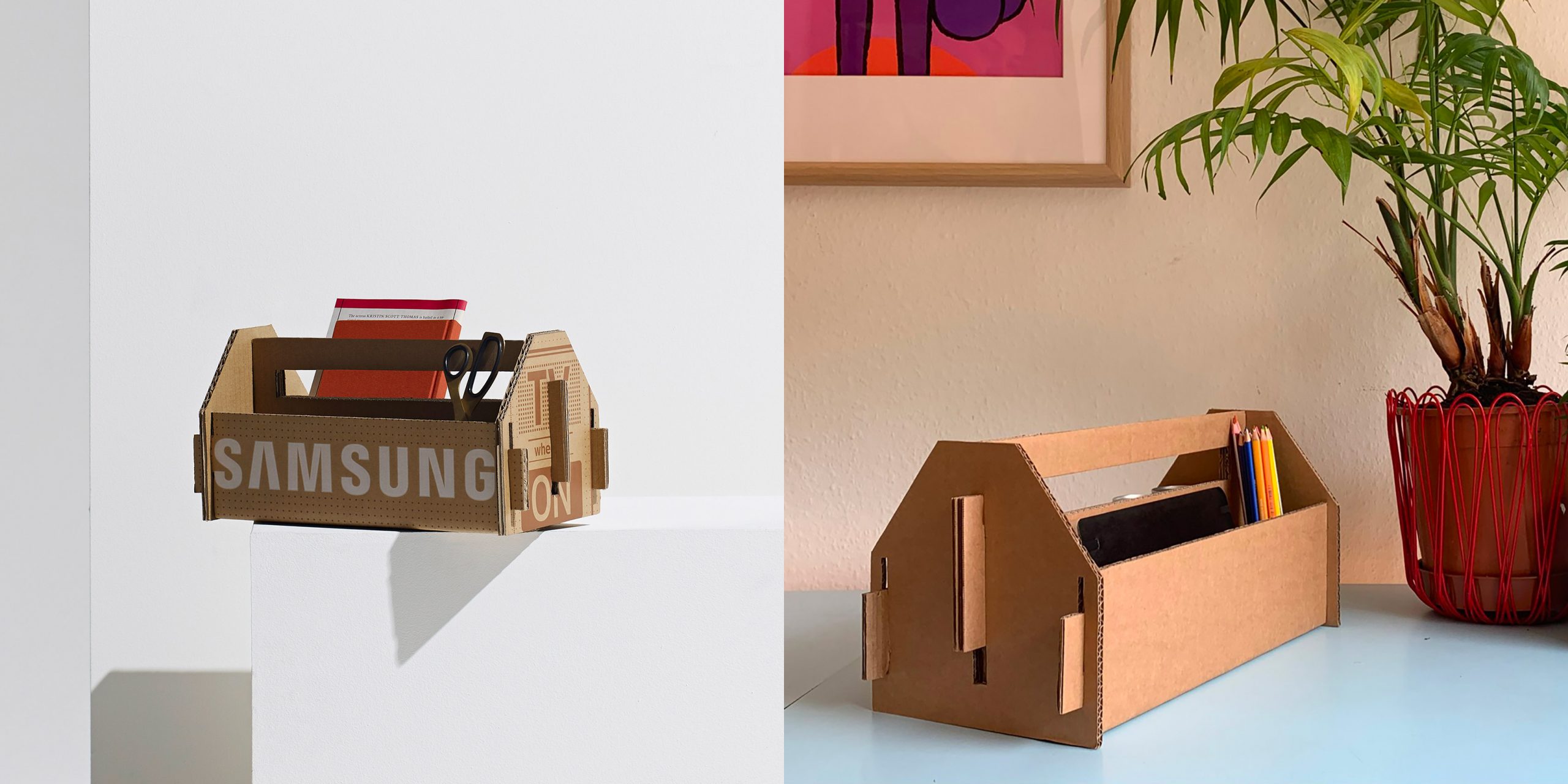 Joseph I’Anson has designed a simple toolbox, which could also be used to store tools, stationery, plants or food. The design comprises a series of flat cardboard panels, which lock together without the need for any glue or tape.

The design has been built using an Eco-Packaging box for The Frame television. 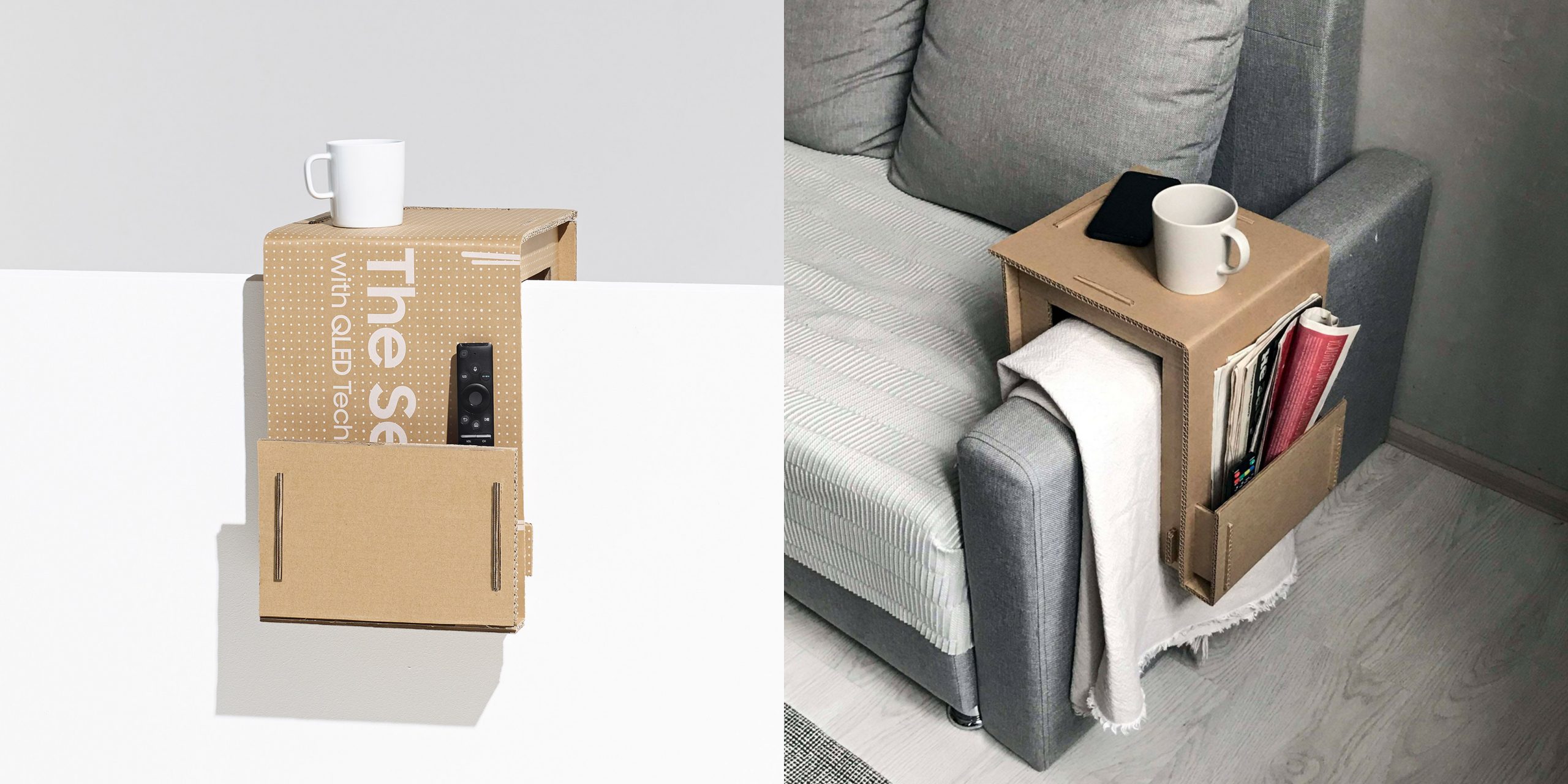 Nina Nechaeva and Aleksey Stelmakh have designed a small side table that can be hooked over the armrest of a sofa, providing a convenient surface to place mugs or cups, plus a storage area for magazines or remote controls.

“The table is designed for people who like to spend time on the couch, watch TV and have everything you need by your side,” said Nechaeva. “It’s a miniature table – perfect for holding your beverages, food, remote, or whatever your heart desires.”

This design has been built using The Serif Eco-Packaging box. 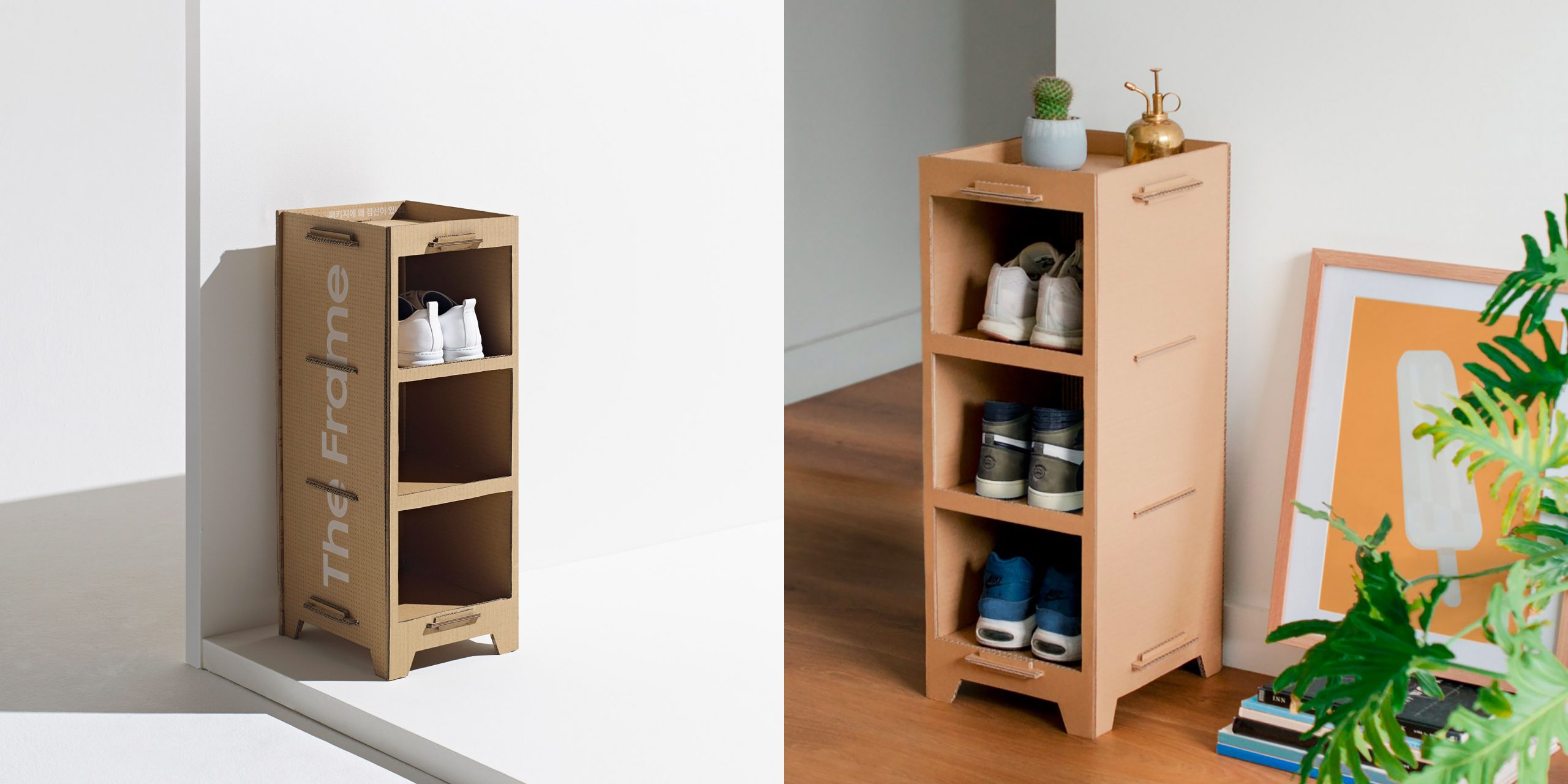 This shoe rack by Loong Jin Yoong of design studio Convoy is constructed using a system of cardboard mortices, tenons and dowels, which holds the structure together without the need for any adhesive.

It features large openings, designed for people that want to show off their collection of sneakers, which are stacked vertically to ensure they take up the minimum amount of floor space.

“The sneaker rack is inspired by sneaker culture where collectors appreciate sneakers as a form of art,” said Jin Yoong. “Being made of cardboard, it replicates the feeling of unboxing a new pair of sneakers.”

The design has been repurposed from The Frame Eco-Packaging box. 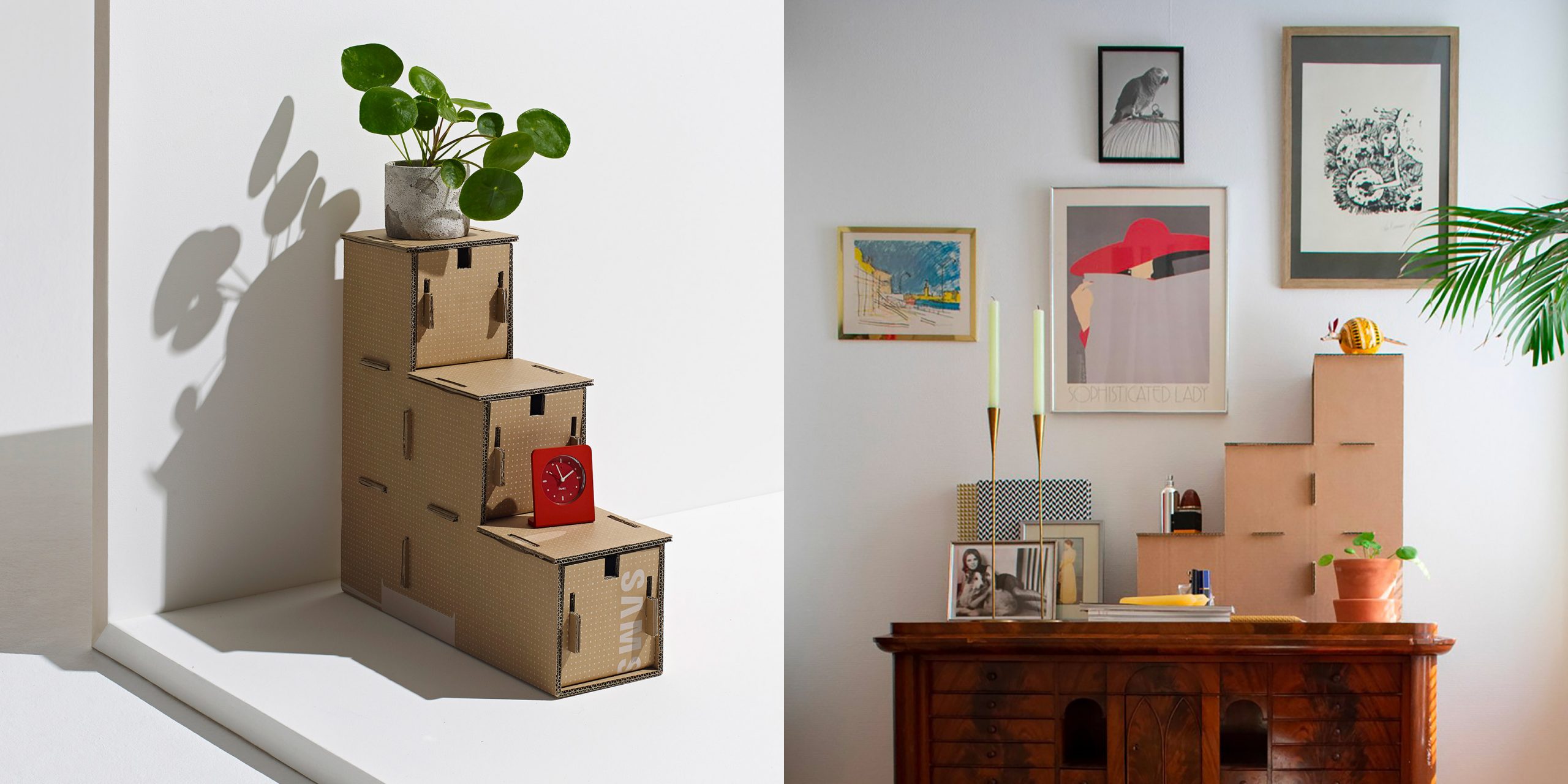 Kibe by Revaz Berdzenishvili is a simple storage unit with three pull-out drawers. It features a distinctive stepped design, which allows the user to arrange plants or other decorative objects on top of it according to their interior space.

“Kibe” means “stairs” in Georgian, which is Berdzenishvili’s native language.

“The shape of Kibe is, as the name reveals, formed as stairs,” said Berdzenishvili. “The aim was to recreate the functional features of stairs and bring it into interior space, as an independent sculptural object.”

It has been built using The Serif Eco-Packaging box. 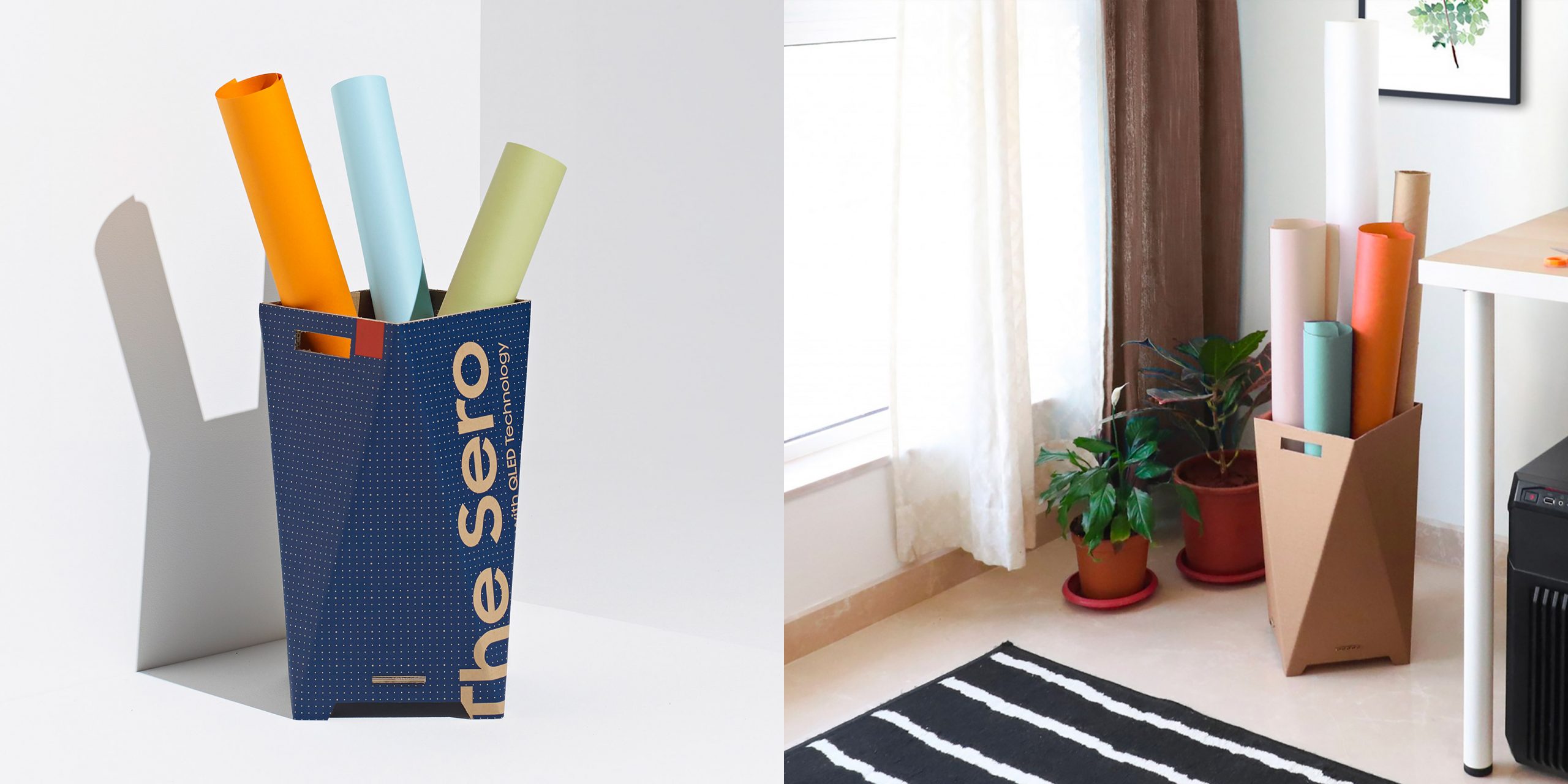 Twist by Akhil Kumar is a basket that can be used to store a variety of different objects. It is constructed from just two sheets of cardboard – one for the base and one for the sides – to minimise the amount of cutting and glueing required.

Although it is very simple, by folding along diagonal lines, users are able to create an interesting and visually appealing faceted shape.

“My idea of Twist emerged from the desire to create a product anyone could use in their home in multiple ways,” said Kumar. “I believe minimising the effort required to build it is a way to encourage people to recreate and repurpose the cardboard boxes.”

It has been built using a The Sero Eco-Packaging box. 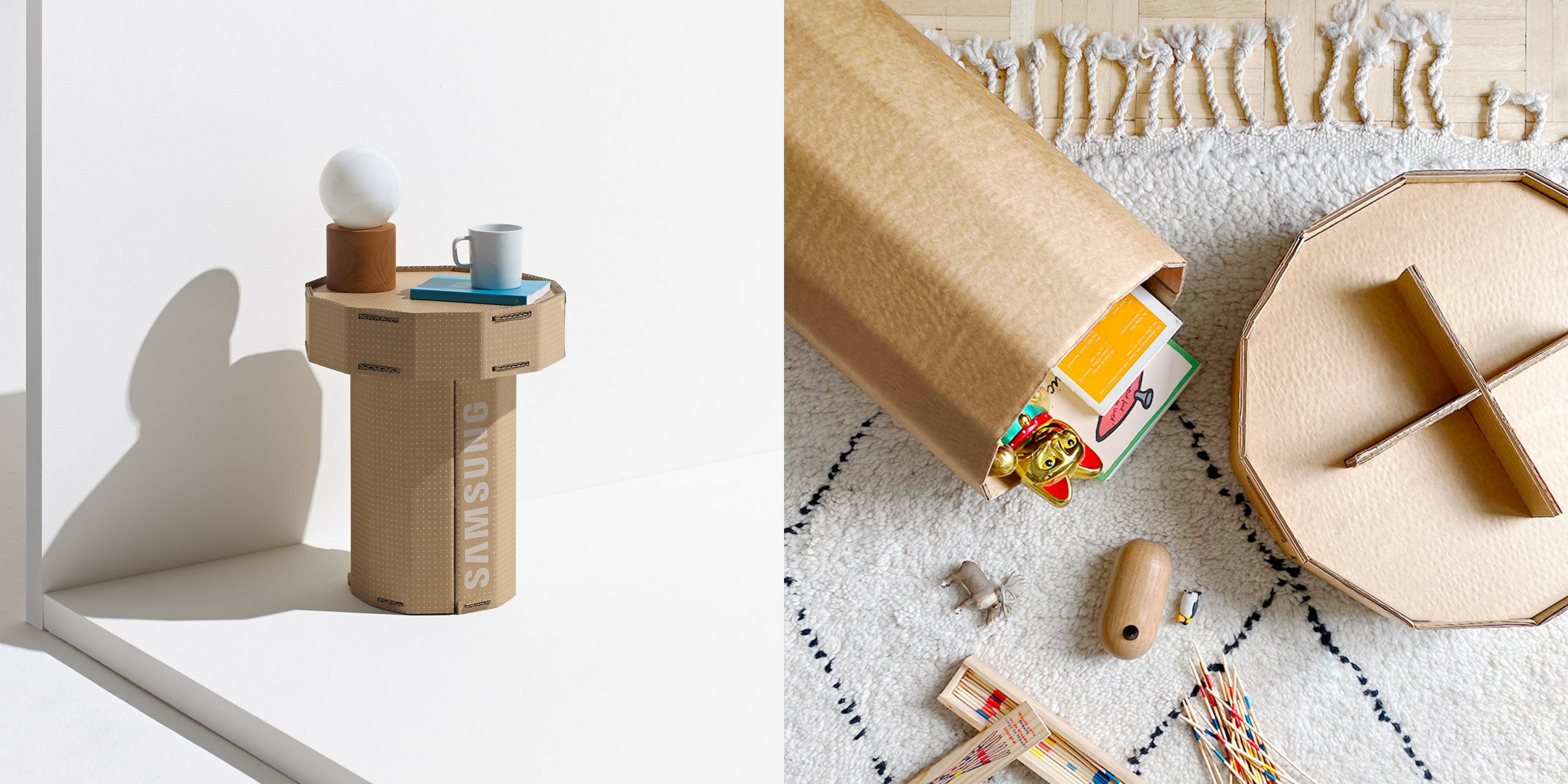 This simple side table provides a surface to place objects on, as well as space to store them in its base.

The design, which comprises two faceted cylindrical volumes – a taller, narrower one for the base and a wider, shallower one for the lid and tabletop – which gives the table a form reminiscent of a toadstool. “Kinoko” means “mushroom” in Japanese.

The Kinoko table is designed thoughtfully for the home, working as a side table in the living room, as a bedside table in a bedroom, and also in a playroom for children with its useful storage,” said the designers.

It has been rebuilt using The Serif Eco-Packaging. 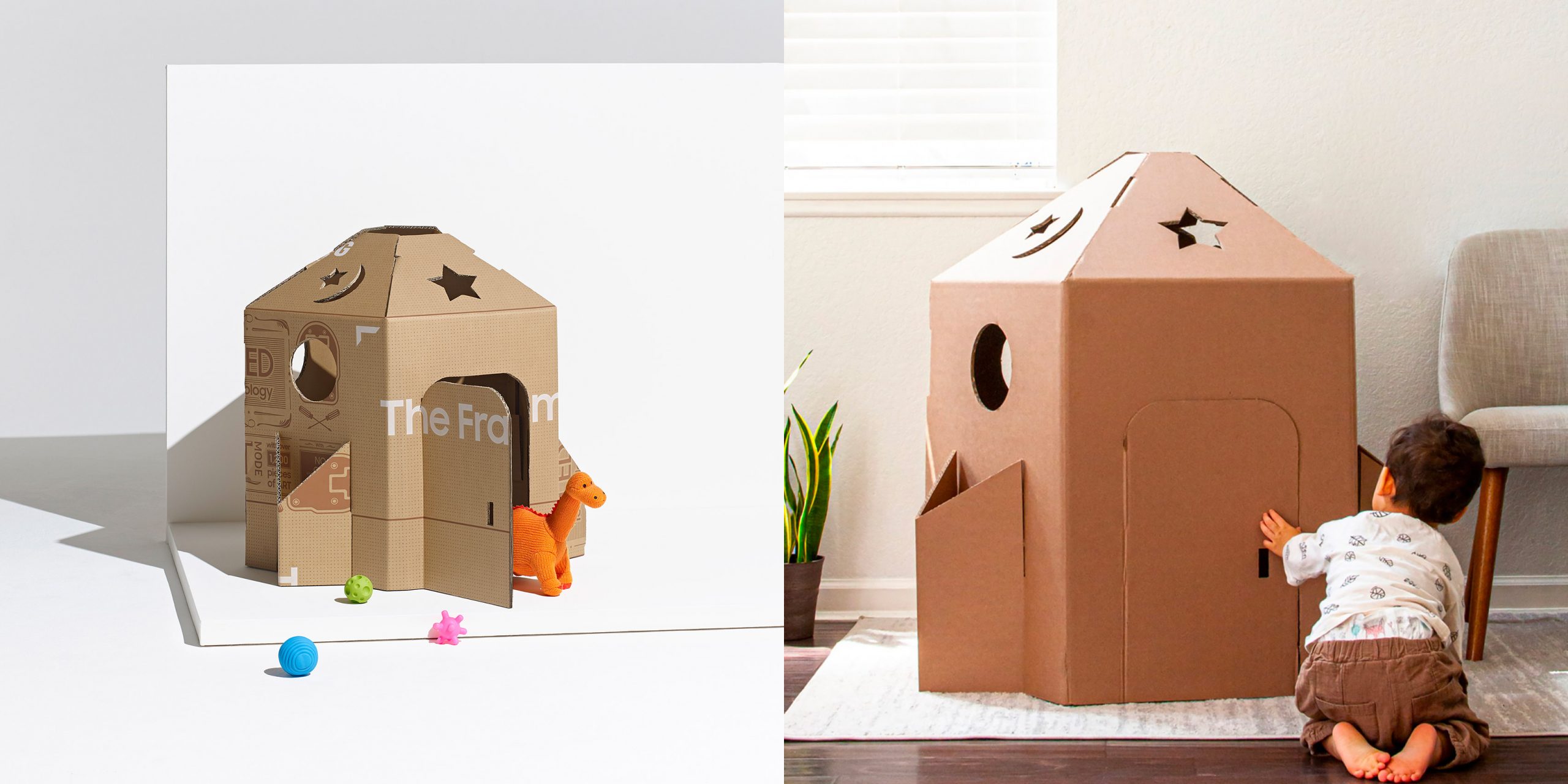 Olga Tesler has created a toy spaceship that kids can crawl inside and use as a fort.

Star- and moon-shaped cutouts in the roof let light inside during the day. At night, the user can place a light inside to cast patterns onto the ceiling.

“The Blast Off Club House has been designed to look like a spaceship and feel like a little personal hideaway,” said Tesler. “The design is geared towards kids of various ages. It’s stable and is equipped with numerous openings that can be used as windows and as access for light.”

This design has been repurposed from The Frame Eco-Packaging box. 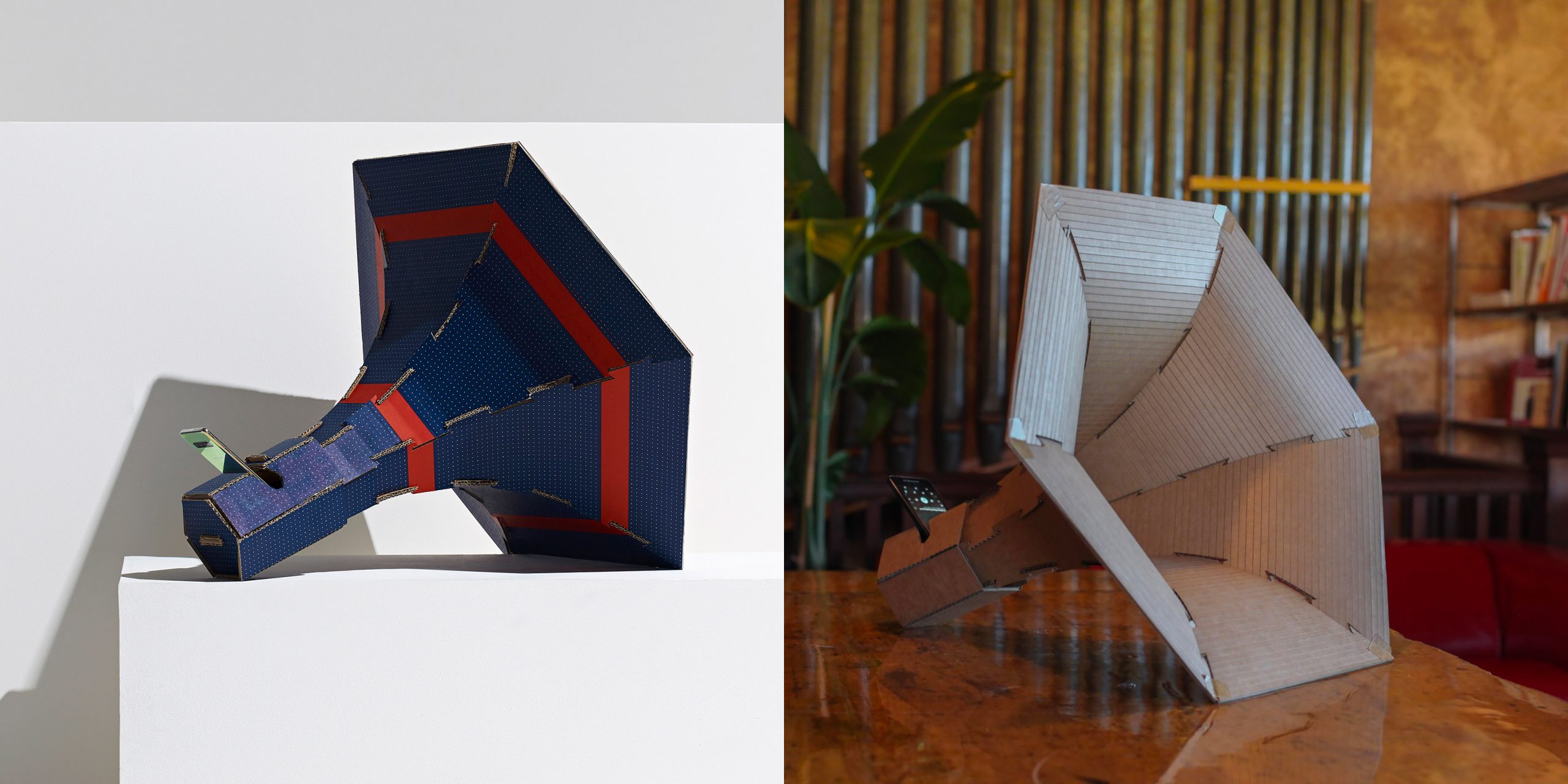 Pushan Panda has created a cardboard horn that amplifies music from a mobile phone. The design is constructed from a series of flat cardboard panels, which are scored and opened out to create a horn shape reminiscent of the amplifiers found on gramophones.

“When the first gramophone was invented in 1898, its horn amplified the mechanical oscillations of a pin running along a disc to produce sounds that could be heard by the human ear,” said Panda.

“My proposal matches this history with modern technology. With a single sheet of cardboard, I created an amplifier that turns sounds from a phone into music that can fill a room.”

The amplifier has been built using The Sero Eco-Packaging box. 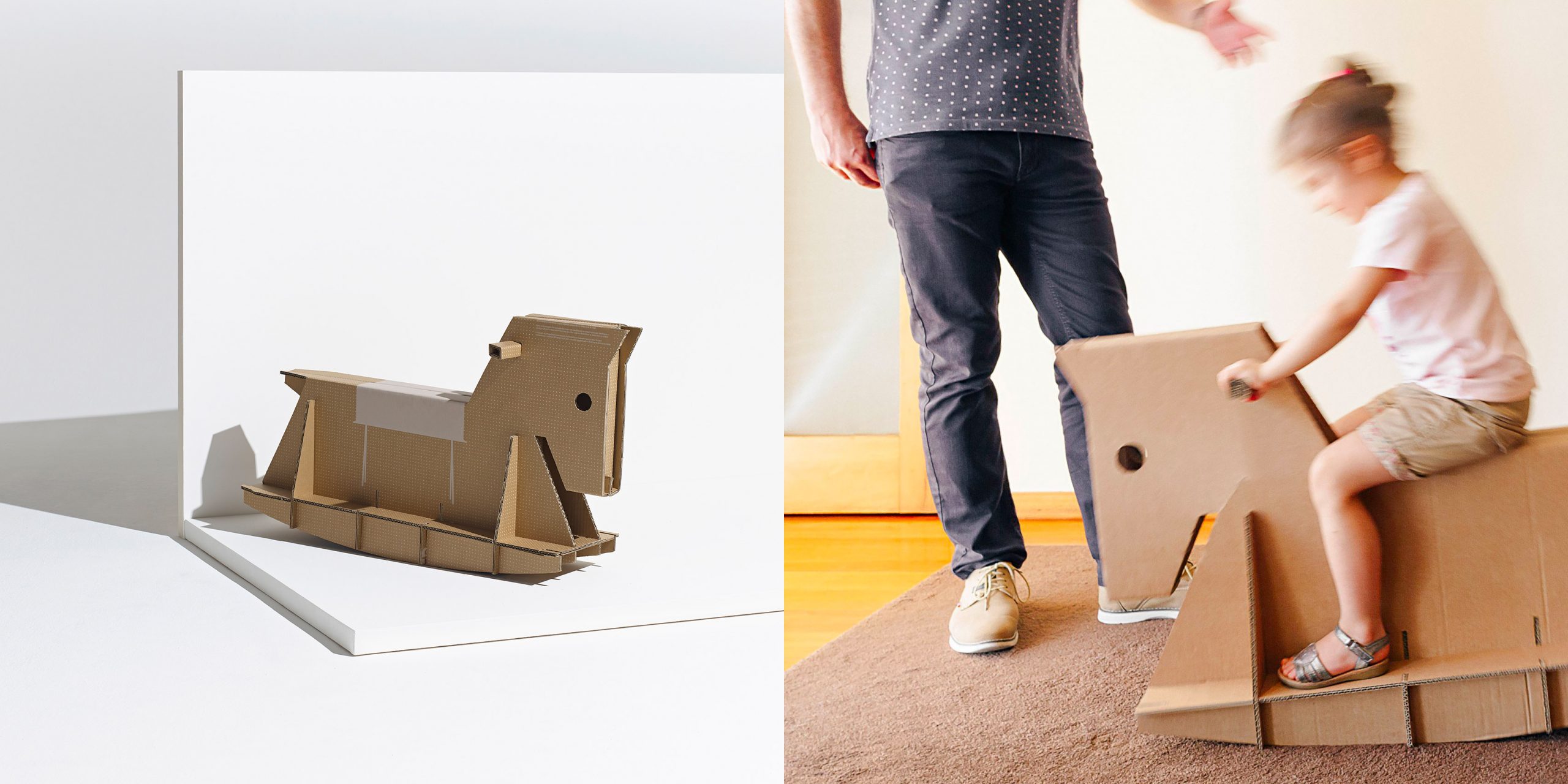 André Cardoso has created a rocking horse for kids made from the box of a Samsung The Serif television.

It is assembled from a series of folded cardboard panels, which are orientated so that the graphic representation of The Serif TV printed on the outside of the box forms a saddle.

“The main idea comes from the central graphic element on the packaging: a TV icon that resembles a horse saddle,” said Cardoso. “It becomes so the starting point to design a simple and archetypal horse silhouette, carefully placed around the saddle.” 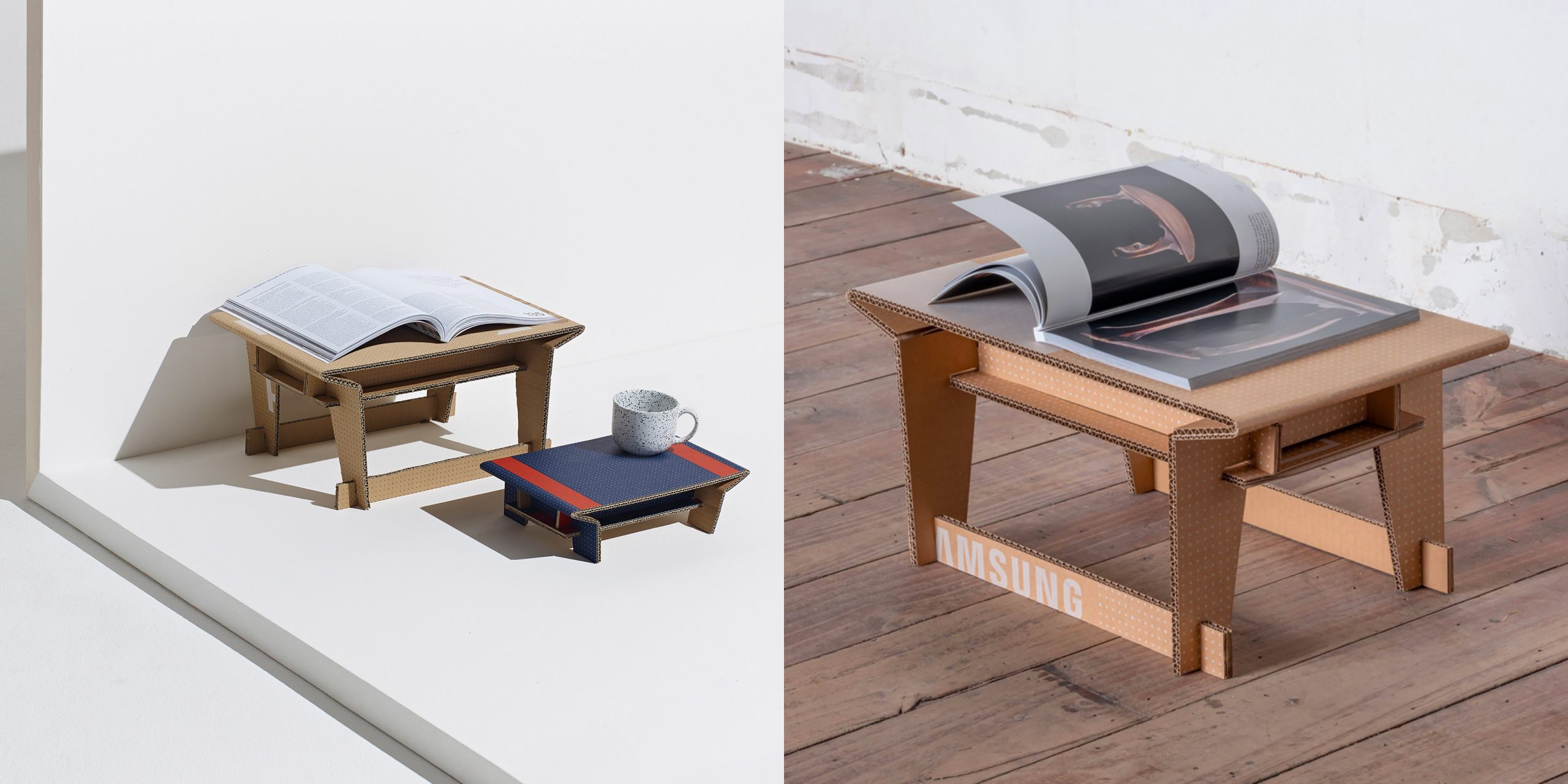 Kiyong Lee and Yejin Kim of design studio beFormative have created a pair of Soban tables – low, tray-like tables that are used in South Korea for dining and carrying food – in two different sizes.

The tabletop and legs of the tables are made from a single sheet of cardboard, which is folded and held in place by supportive bracing, giving the tables a clean and elegant appearance.

“It is designed so that anyone can easily build it by folding and assembling the connecting structures,” said beFormative.

The tables have been built from The Frame and The Sero Eco-Packaging boxes. 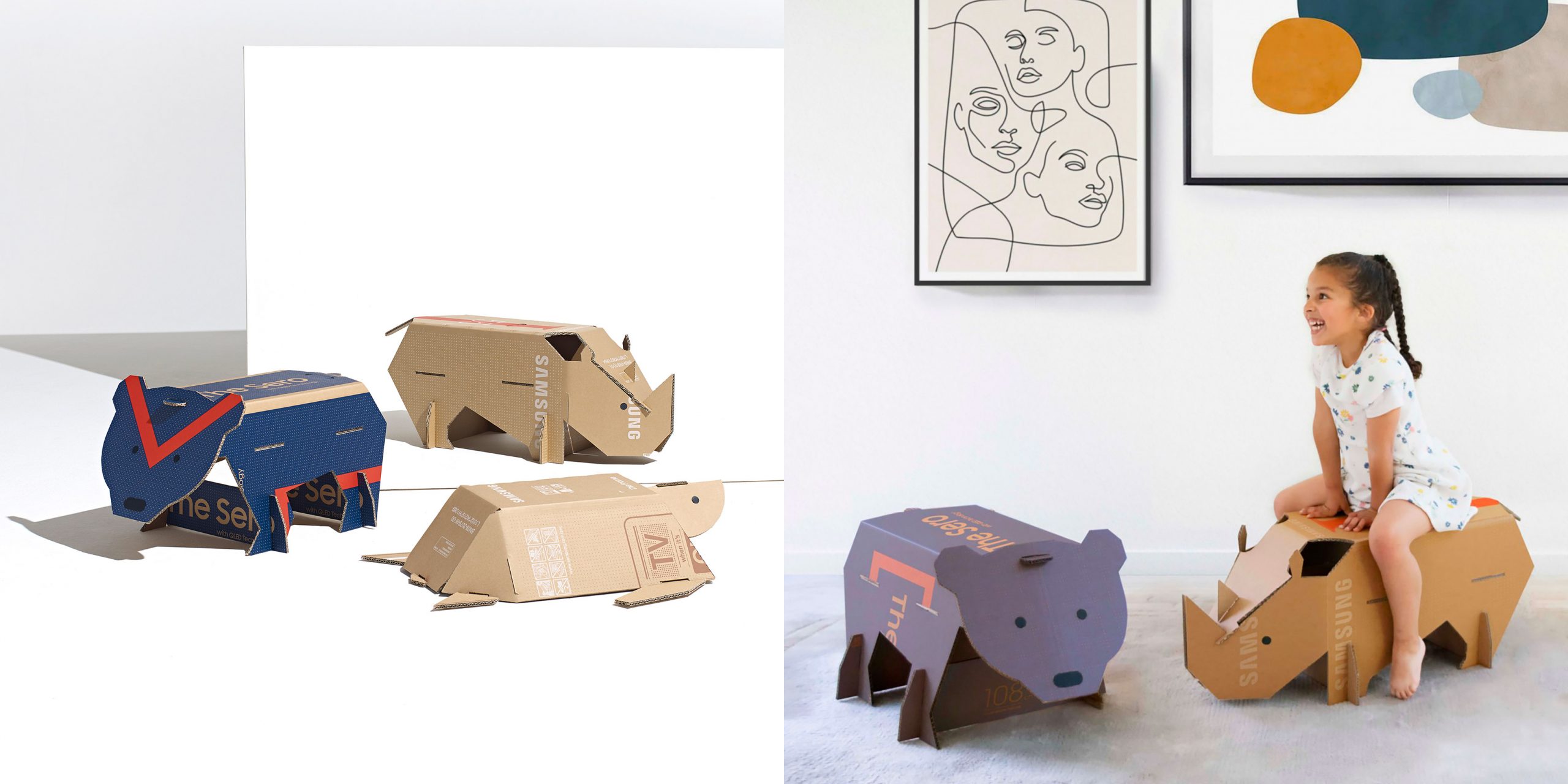 Sarah Willemart and Matthieu Muller, who run a design studio together called Studio Fantasio, have created a series of cardboard toys for children, which are in the shape of animals that are threatened with extinction – a polar bear, a black rhinoceros and a sea turtle – each of which is designed to be constructed from a different Samsung Eco-Packaging box.

“Biodiversity is one of the world’s most precious treasures,” said the designers. “Unfortunately due to climate change and increasing human activity, some species are on the edge of extinction. Endangered Animals is a family of three multifunctional companions for children aiming to raise awareness of animals’ conditions.”

Each animal is designed to be built from a different Eco-Packaging box. 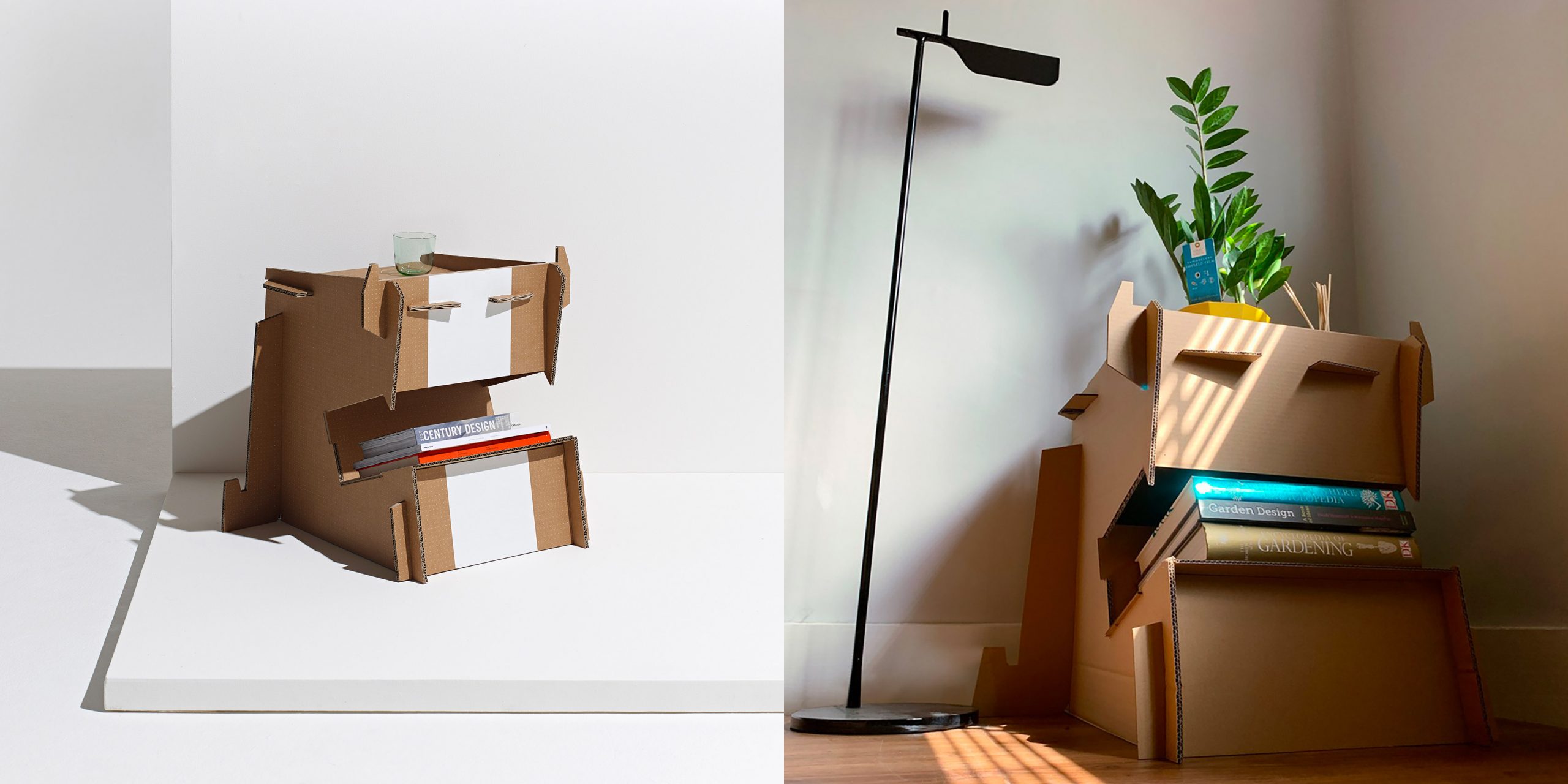 Magnuss by Dan White and James Allerton of The Cube Concept
Teddington, UK

Magnuss, which is an anagram of “Samsung”, is a multifunctional table and storage unit, which gives the user space to store books, magazines and remote controls. It is constructed from a series of cardboard panels, which slot together to create the form of a monster-like face.

“This competition brief felt like the perfect opportunity to create a character that crossed the lines between function and play,” said Dan White and James Allerton, who run a creative studio called The Cube Concept in London.

“It brings a smile to those that interact with it, whilst giving the user a genuine reason to reuse the packaging to create a purposeful and thoughtful design.”

Magnuss has been built from The Serif Eco-Packaging box. 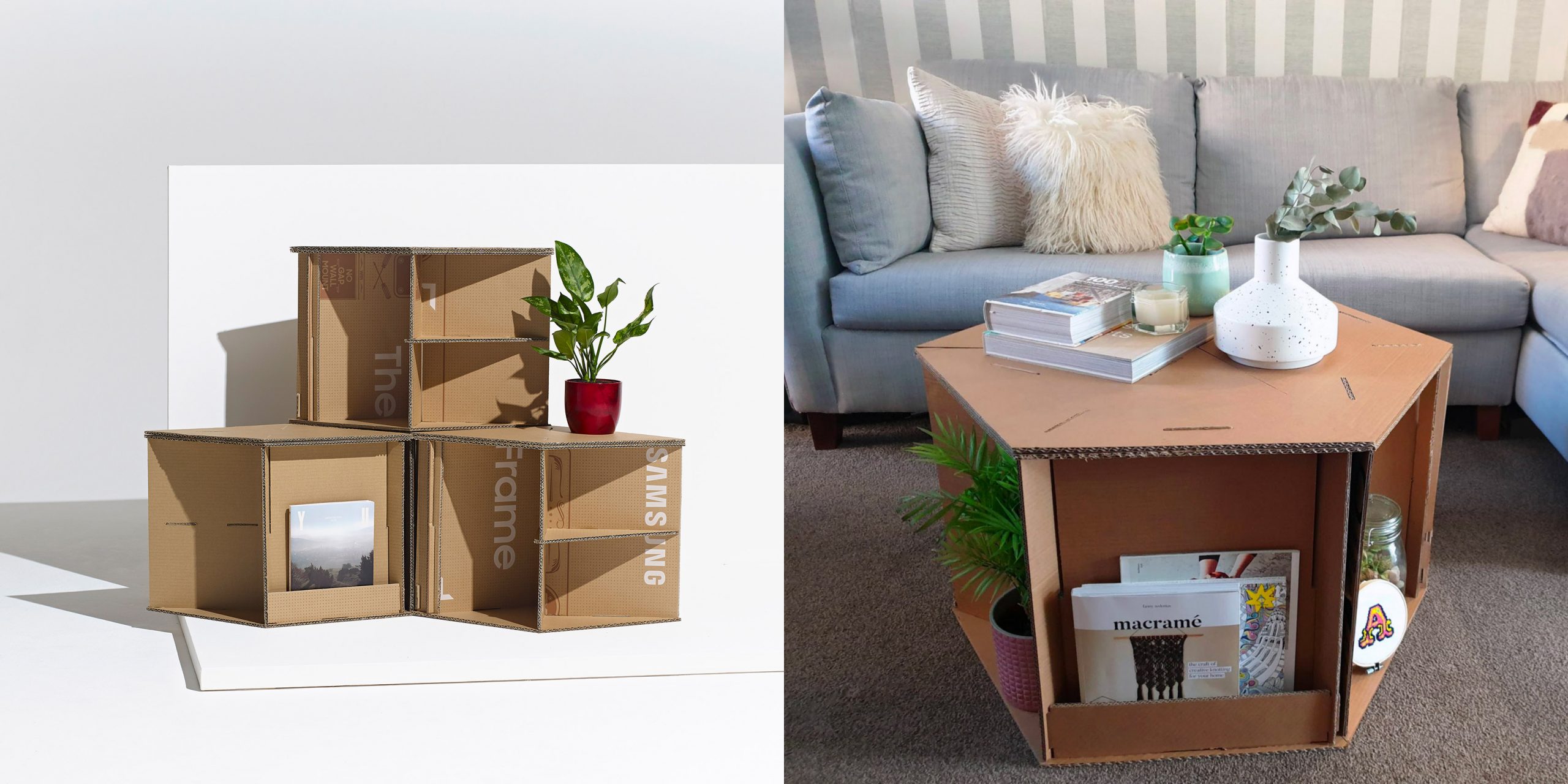 Tessellate by Abigail Whitelow is a modular display and storage system.

It comprises a series of triangular modules, which can be arranged in a number of different ways – either to show off the objects it contains, or to hide them away – to create a table, sideboard or shelving.

“It’s perfect for houses of all shapes and sizes, and can be easily adapted giving endless possibilities to a cardboard box that would usually be discarded,” said Whitelow.

The modular system is designed to be built from a The Frame Eco-Packaging box. 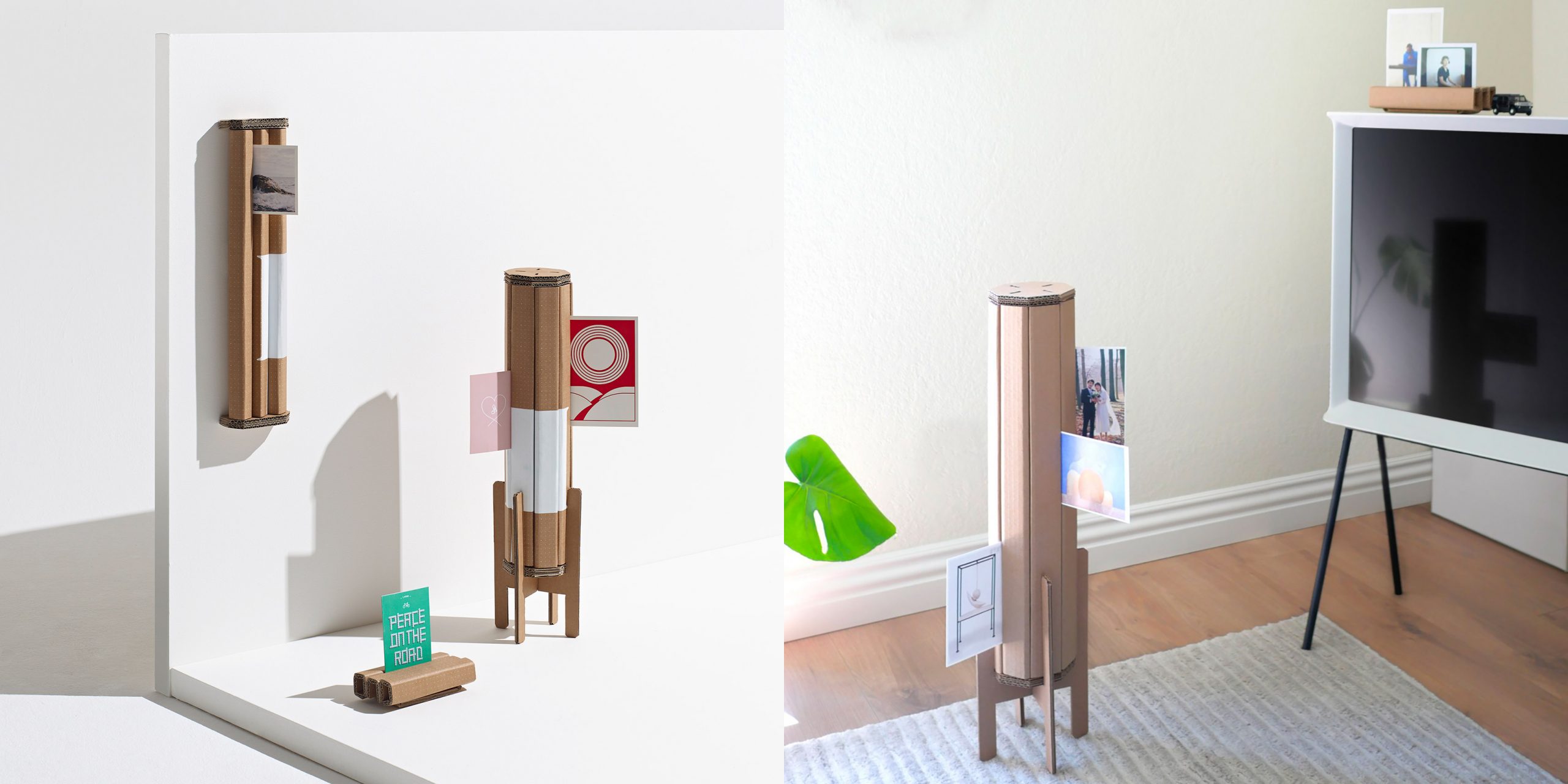 Koji Yamaura‘s Postcard Planters are a series of interior objects that allow the user to “plant” photographs or postcards and display them in their home.

There are three different versions of the planters – one that’s designed to be wall-mounted, one that’s floor-standing and one for tabletops. Each one comprises strips of folded cardboard, which are arranged to create small gaps for photos or postcards to be inserted.

“Spending more time at home due to Covid-19, I came up with this idea whilst looking back at my collection of postcards from art museums and exhibitions,” said Yamaura. “I wondered if there was a way to enjoy and beautifully display my favourite postcards and memorable photos.”

The design has been built using The Serif Eco-Packaging box.

The post 15 furniture designs made from repurposed cardboard revealed in the Dezeen x Samsung Out of the Box Competition shortlist appeared first on Dezeen.