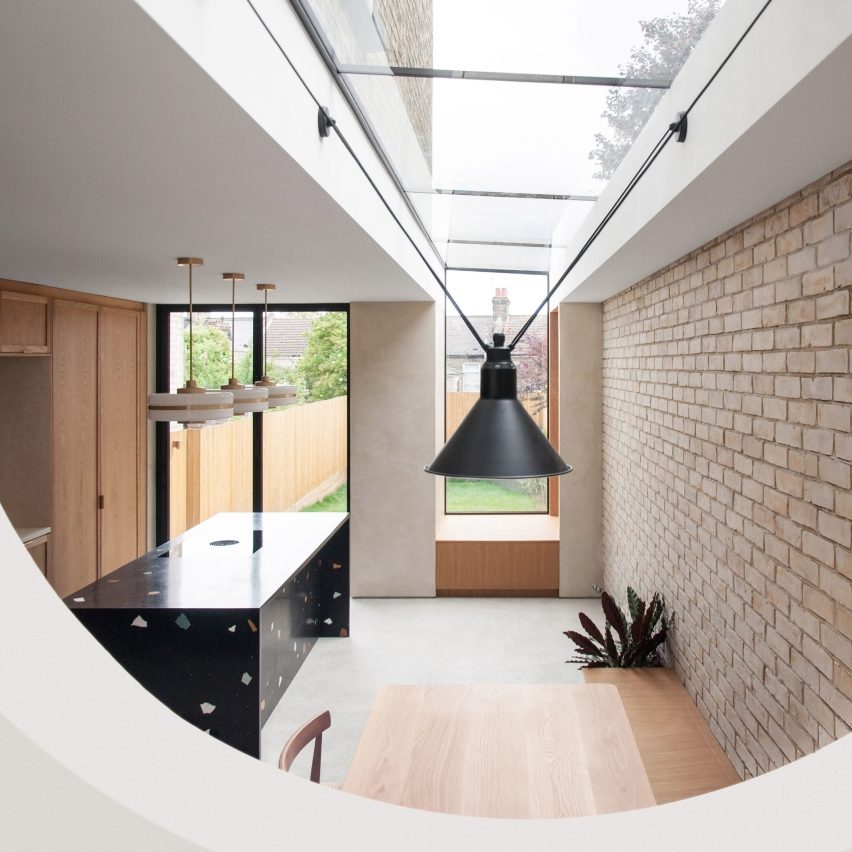 A half-arch window in this east London home extension by Yellow Cloud Studio offers glimpses of the older parts of the property.

Glyn House is situated in the neighbourhood of Clapton and is occupied by a young couple who are hoping to grow their family.

Previously, the poky proportions of the house – which dates back to the Victorian era – meant that there were no rooms where both adults and kids could comfortably spend time together or do activities. 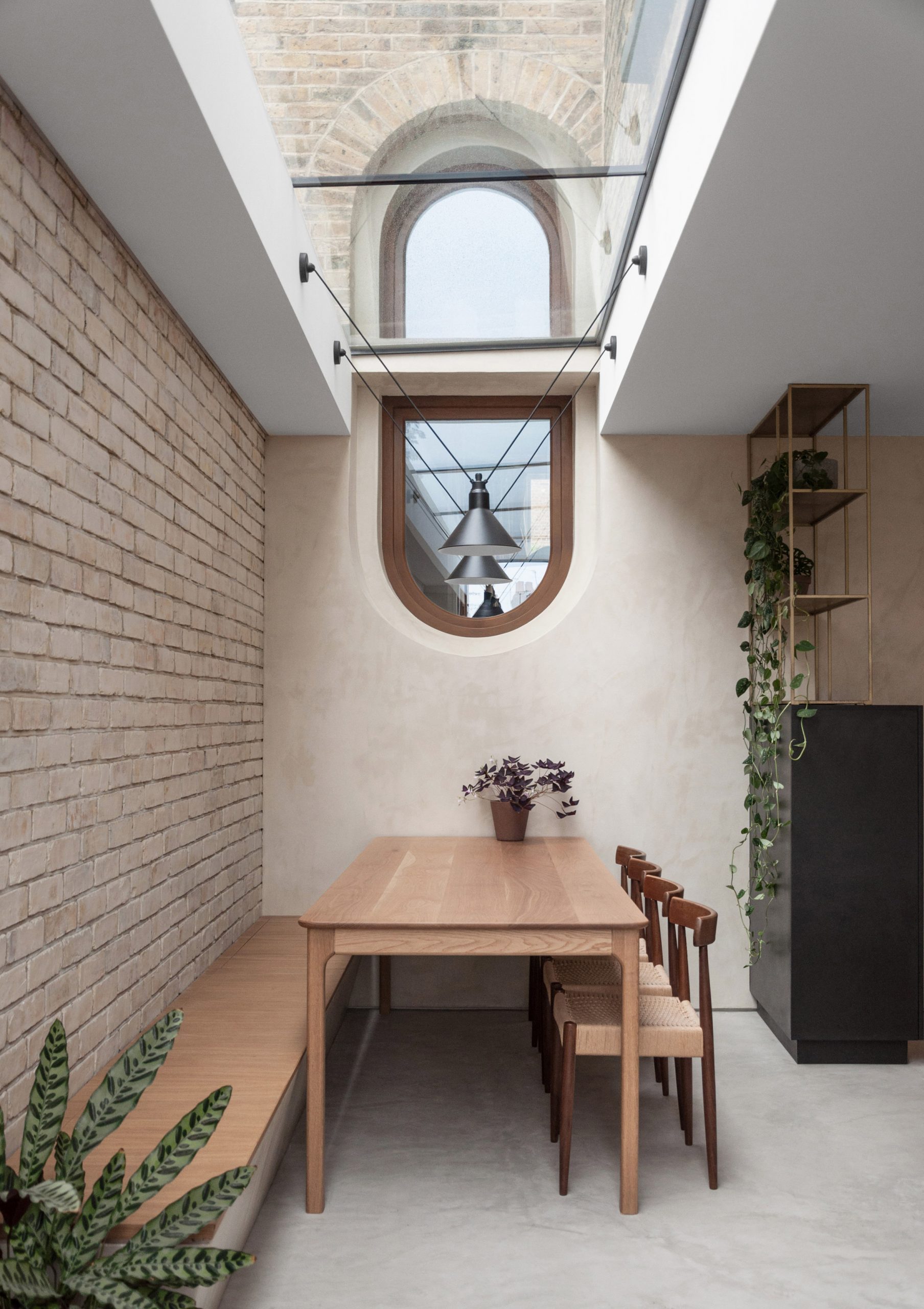 Hackney-based Yellow Cloud Studio was tasked with creating a sizable kitchen and dining area at the rear of the home that didn’t seem distanced from the existing living rooms towards the front of the plan.

This ended up proving difficult for the studio due to the position of Glyn House’s garden, which sits markedly low – a flight of seven steps was required to link the new extension to the old portion of the home. 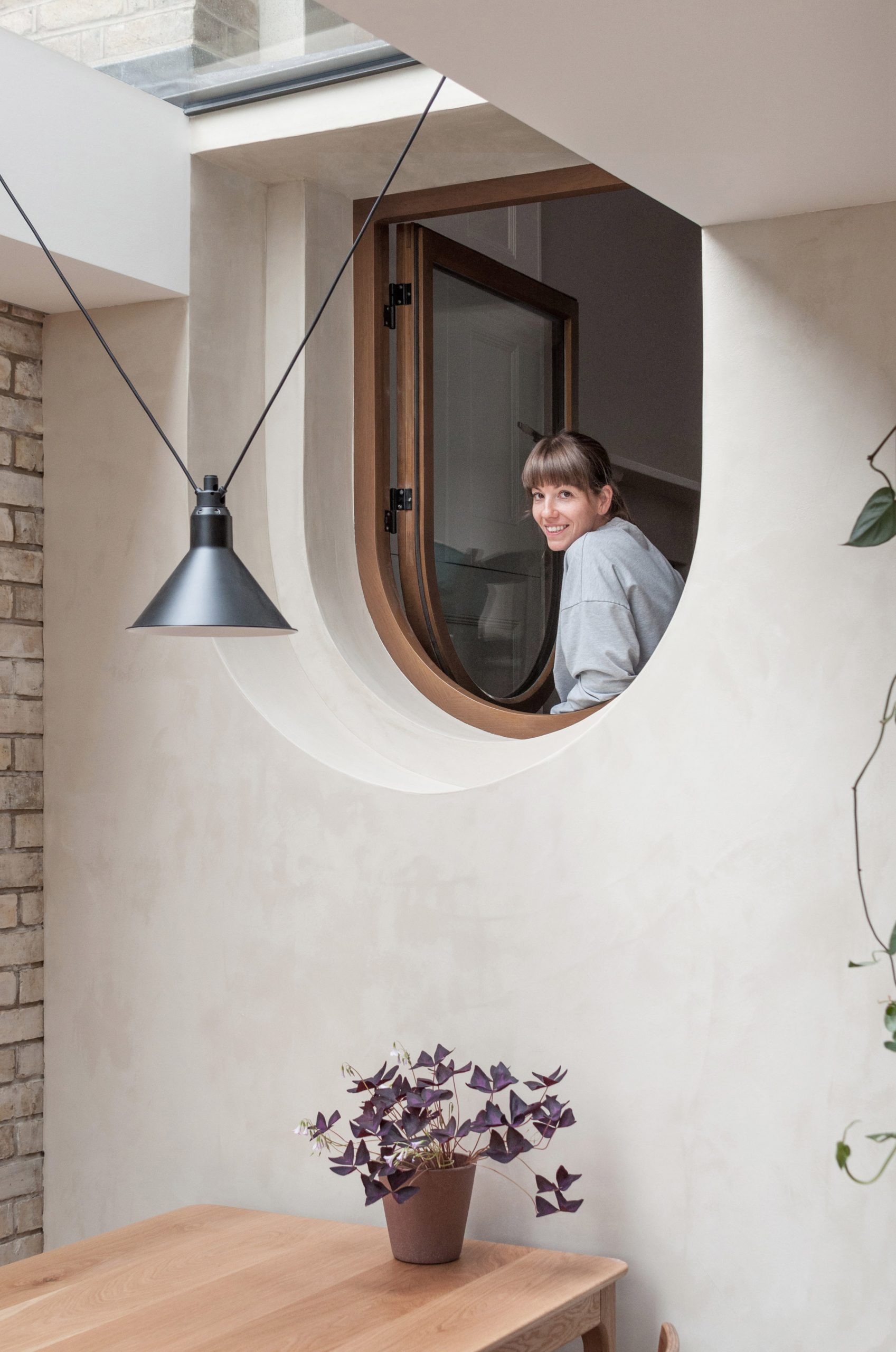 To enhance the visual connection between the back and front of the home, the studio has punctured the rear wall of the extension with a recessed, rounded window.

The timber-framed window is divided into a half-arch shape by a slim skylight that runs the length of the extension and down across its facade, forming a picture window for an oak-lined reading nook that the studio has created. 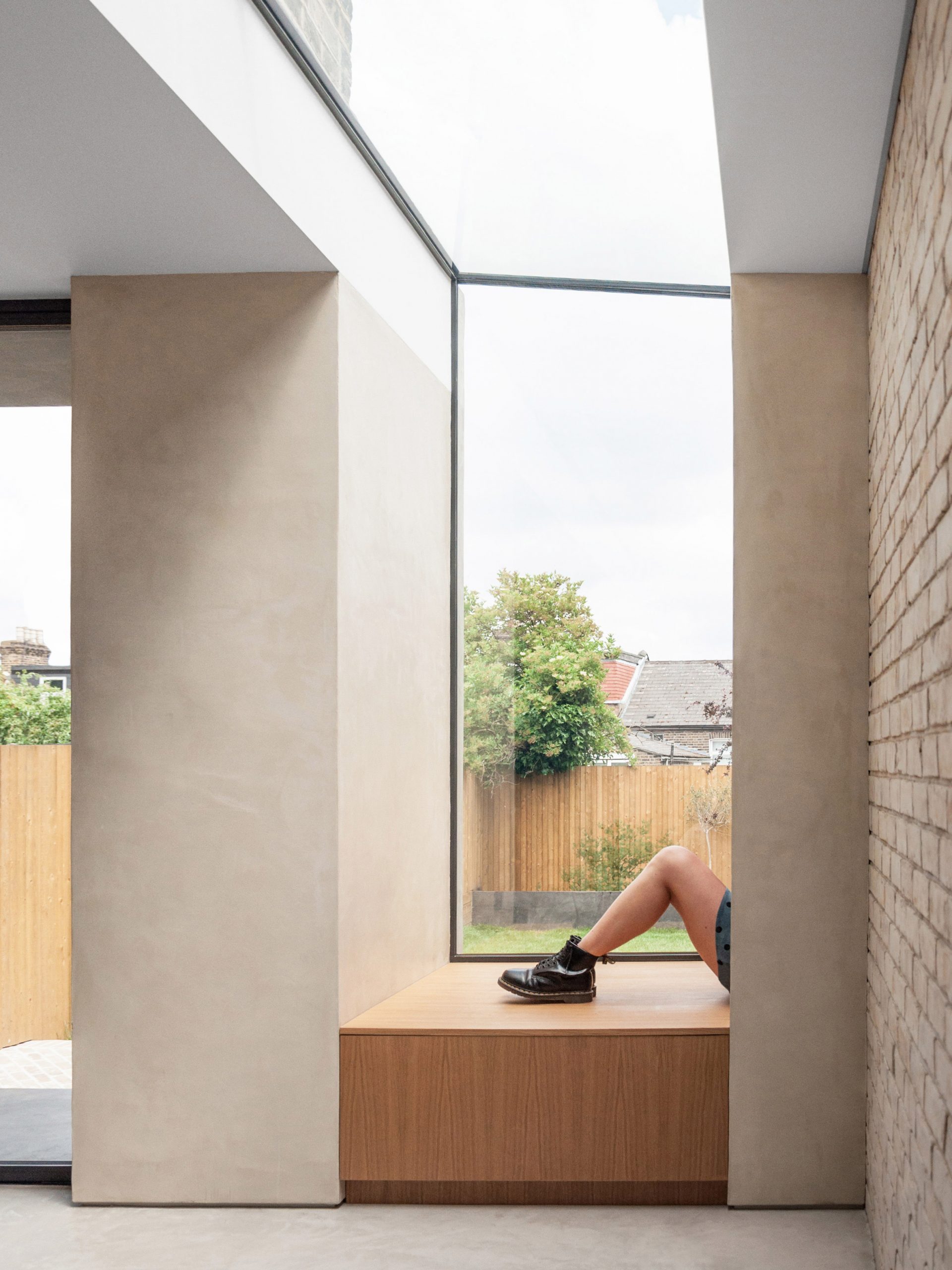 A combination of soft-beige plaster and black concrete has been applied to the exterior of the extension. Pale bricks have then been used to build a short patio.

These same materials have been applied throughout the inside of the extension, an attempt by the studio to make “the interior represent a more private version of the same architecture”.

One peripheral wall is clad with bricks, and the remaining internal surfaces are washed with the same beige-hued plaster. 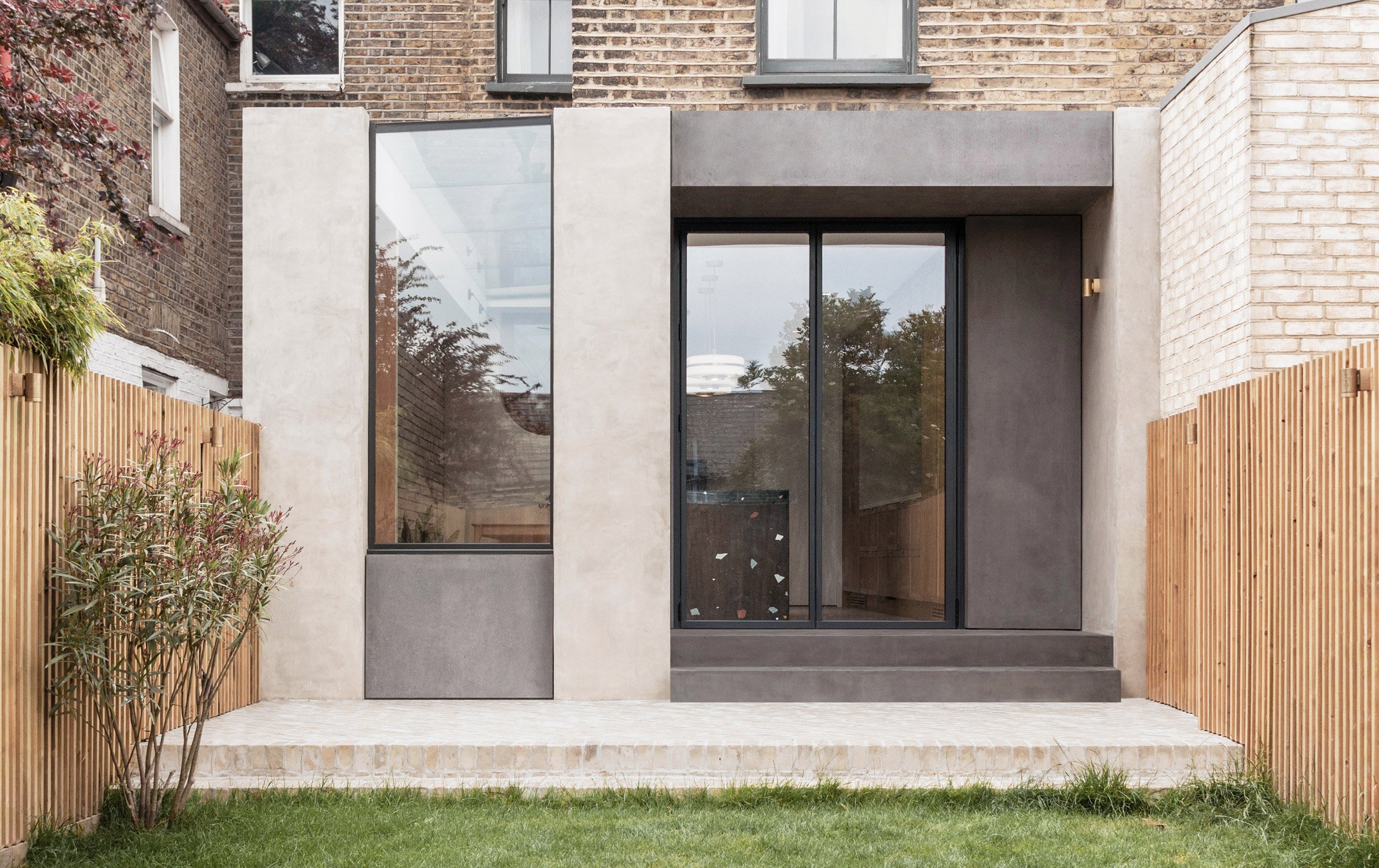 Oak has then been used to craft other elements like the dining table, the bench seat, and the cupboards in the kitchen, which has been finished with subtle brass handles.

Brass features again on the stems of three disc-shaped pendant lamps suspended from the ceiling.

Terracotta-coloured geometric tiles are also arranged to form a patterned splashback behind the sink area. 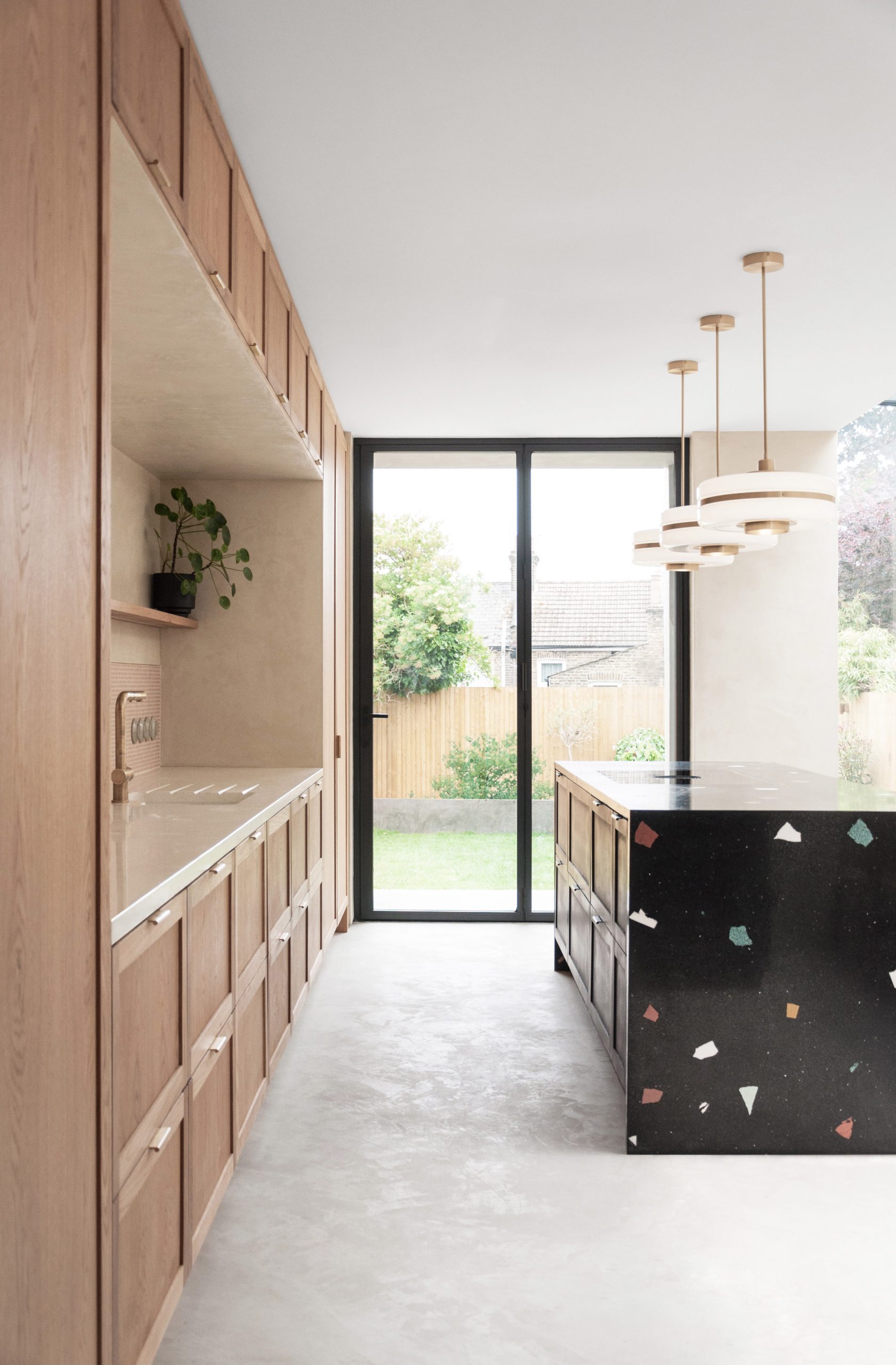 There are also a couple of striking black decor elements like the storage cabinet at the back of the room and the cone-shaped lamps above the dining table.

The kitchen’s chunky terrazzo breakfast island, which is inlaid with oversize chunks of colourful aggregate, is also black.

“They provide the necessary contrast against the palette of natural materiality and therefore intensify the experience of raw, handmade surfaces,” added the studio. 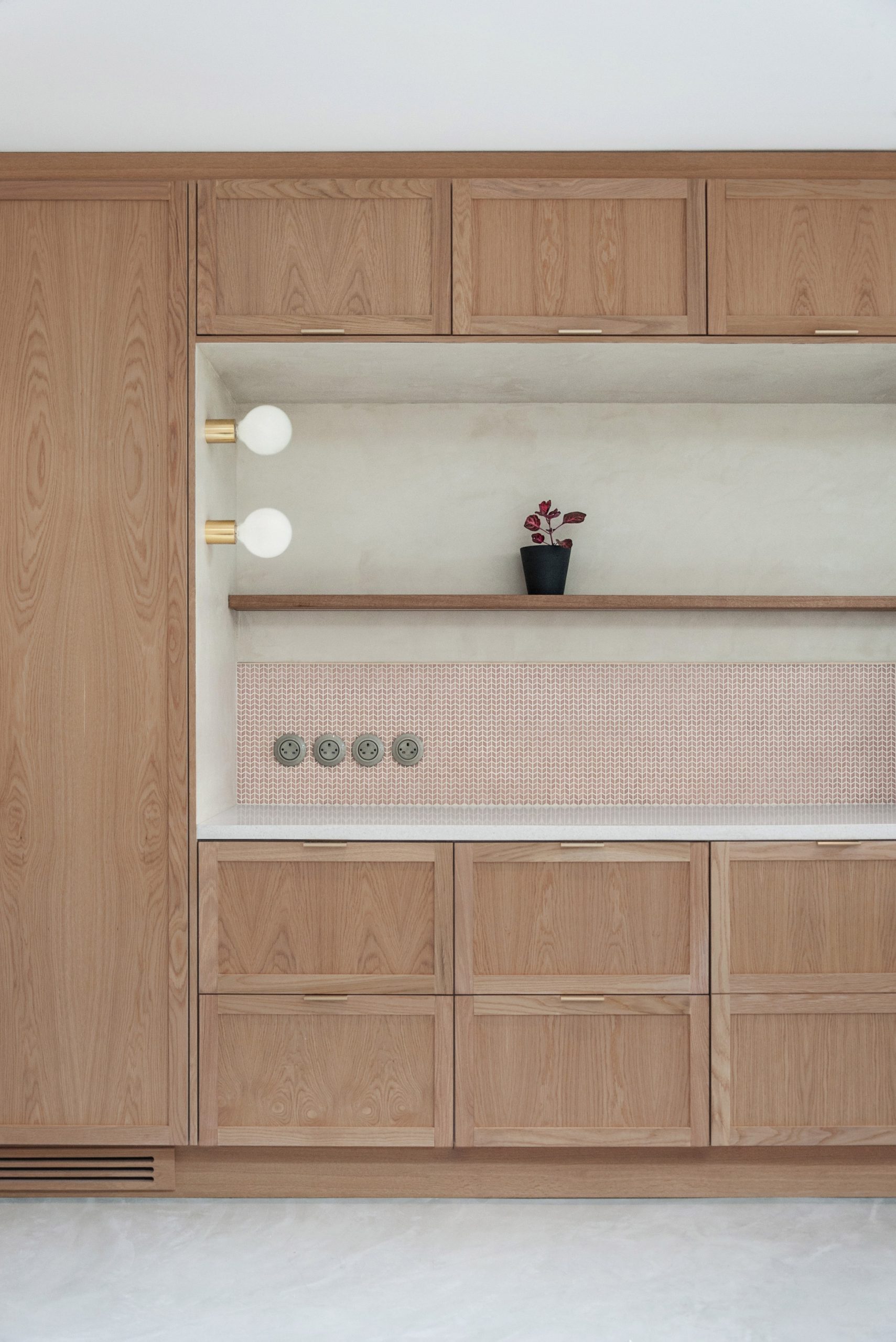 Yellow Cloud Studio was established by Eleni Soussoni and Romanos Tsomos in 2013.

This isn’t the first residential extension completed by the studio – three years ago it added a triangle-shaped volume to a home in Hackney. Inside, half of the extension is lined with birch plywood, while the other half is clad with stock bricks.