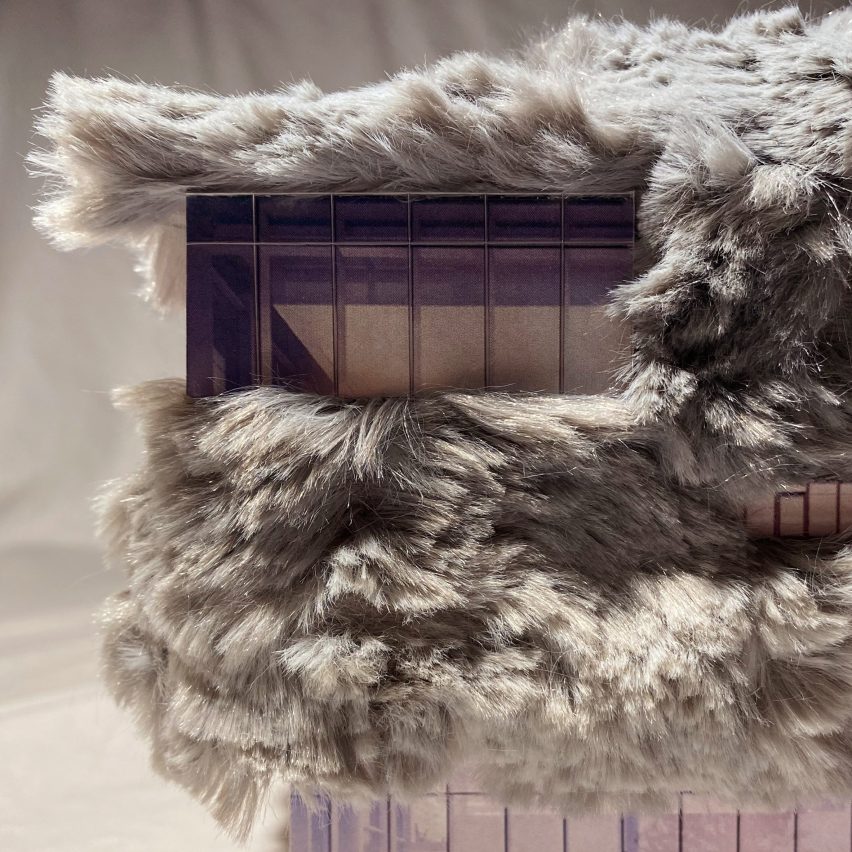 This VDF school show by Kent State University’s College of Architecture and Environmental Design features a conceptual biomass power plant and a proposal that reimagines the school’s brick facade as fur.

All 10 of the listed projects were completed by students enrolled on the different year groups and studios of the Ohio university’s architecture program.

The school’s architecture programs invite students to explore a vast array of topics, ranging from sustainability to robotics, in an effort to “prepare forward-thinking leaders” and “shape a better future”.

“The Architecture programs at Kent State University are committed to enhancing the built environment and pursuing progress through experimental design and creative thinking. The programs prepare forward-thinking leaders, empowering graduates with the passion, skills, and expertise to envision and shape a better future.

“The following projects display different year levels in both our undergraduate and graduate programs, covering design topics of sustainability, spacial and programmatic complexity, urban design, robotics, systems integration, and representation, among many others.

“We believe in exposing our students to contemporary theories, advanced technical skills, and newly disseminated knowledge to create an integrated platform for scholarship, design excellence, constructive discourse and debate.” 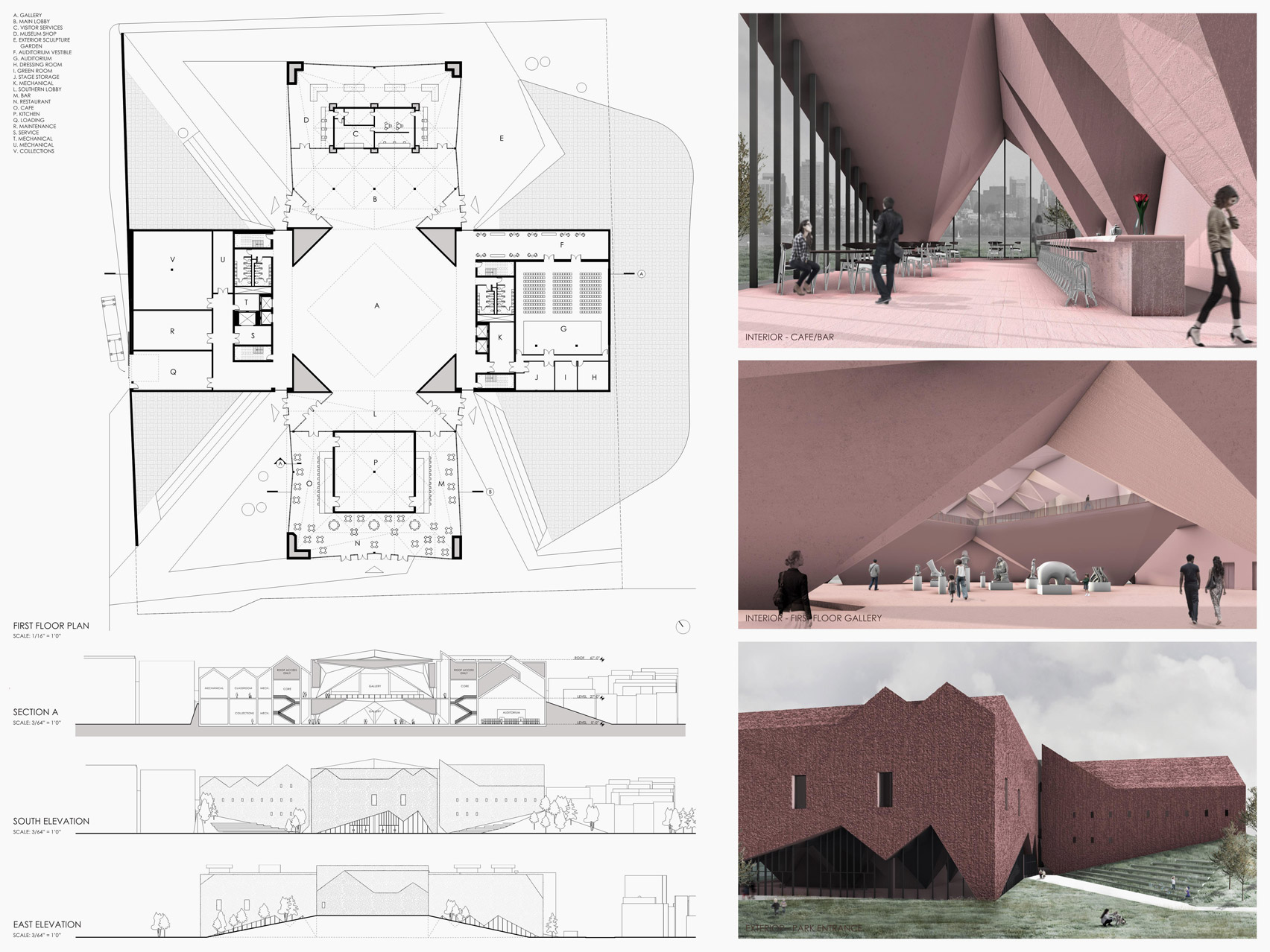 The Plus by Amanda Harrer and Morgan Coler

“The Plus Museum of Contemporary Art is viewed as a monolithic object that uses simple plan figure and pyramidal vaulting structure to mediate site design, provide integrated daylighting, and relate the interior of the building to its East Boston context.

“The plus figure allows an organisation of hierarchy through the structural and programmatic functions by compartmentalising areas of the project’s mass. However, through the plasticity of colour, texture, and form of the site-cast concrete, the monolithic object challenges the notion that art and sculpture should be curated only in pure white boxes.” 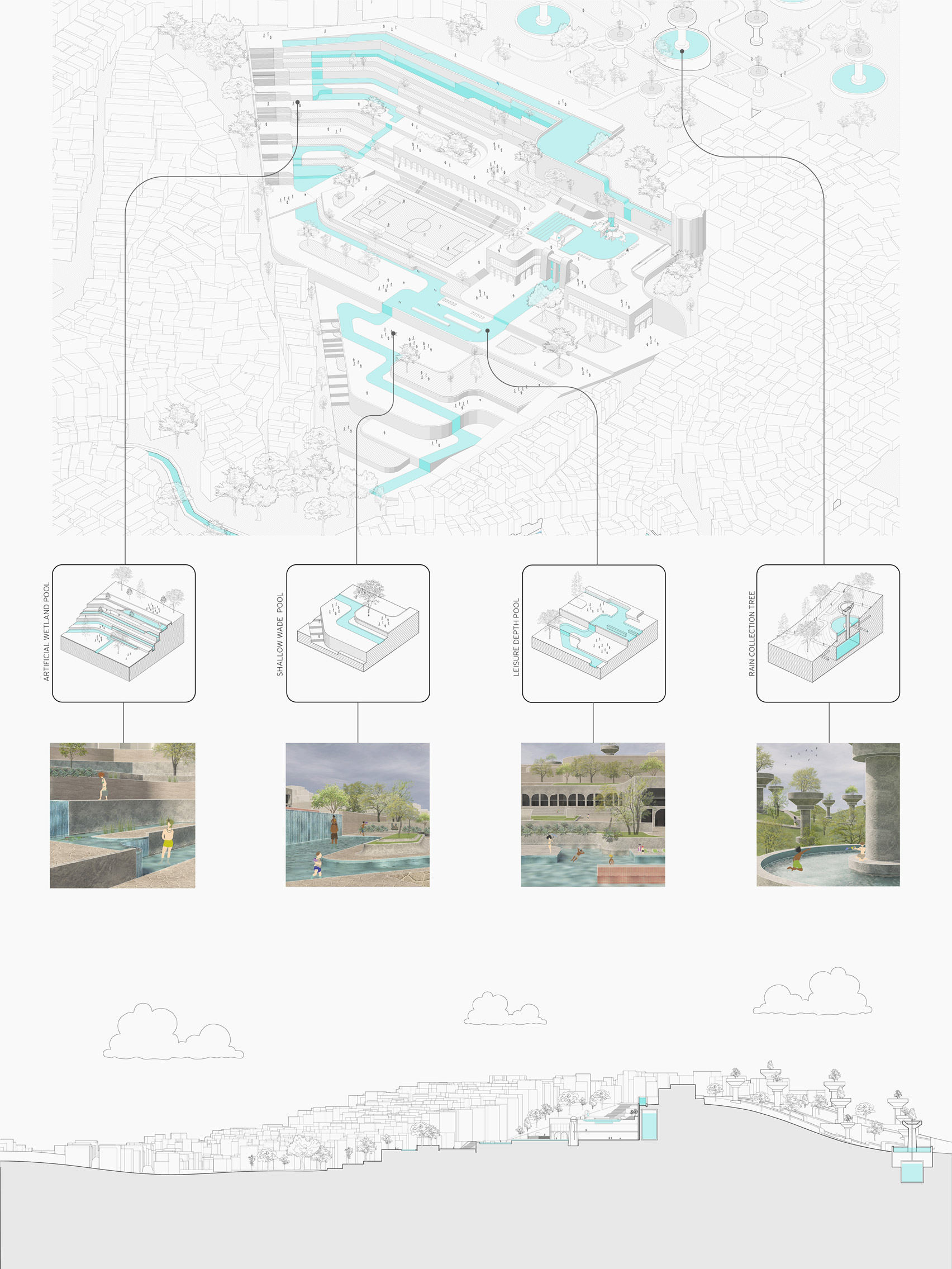 “Water infrastructure in Sao Paulo, like many cities around the world, was implemented at a fast pace due to the rapid urban sprawl the area experienced. Due to this rapid growth, the water infrastructure systems were rushed and problematic. Informal settlements are often developed for years before urban infrastructure is even considered.

“The system is aggravated by multiple problems such as waterproofing of the soil, inadequate occupation of the floodplains, erosion and siltation, rectification and channelling of rivers and streams, and flaws in the laws of use and occupation of land and water contamination.

“This project utilises an existing municipal pool model in parallel with water infrastructure strategies to rethink our relationship with both the natural and artificial water systems that keep us alive. It dissects links between different typologies of water including infrastructure, leisure, and necessity, and rethinks how we view public or collective space.” 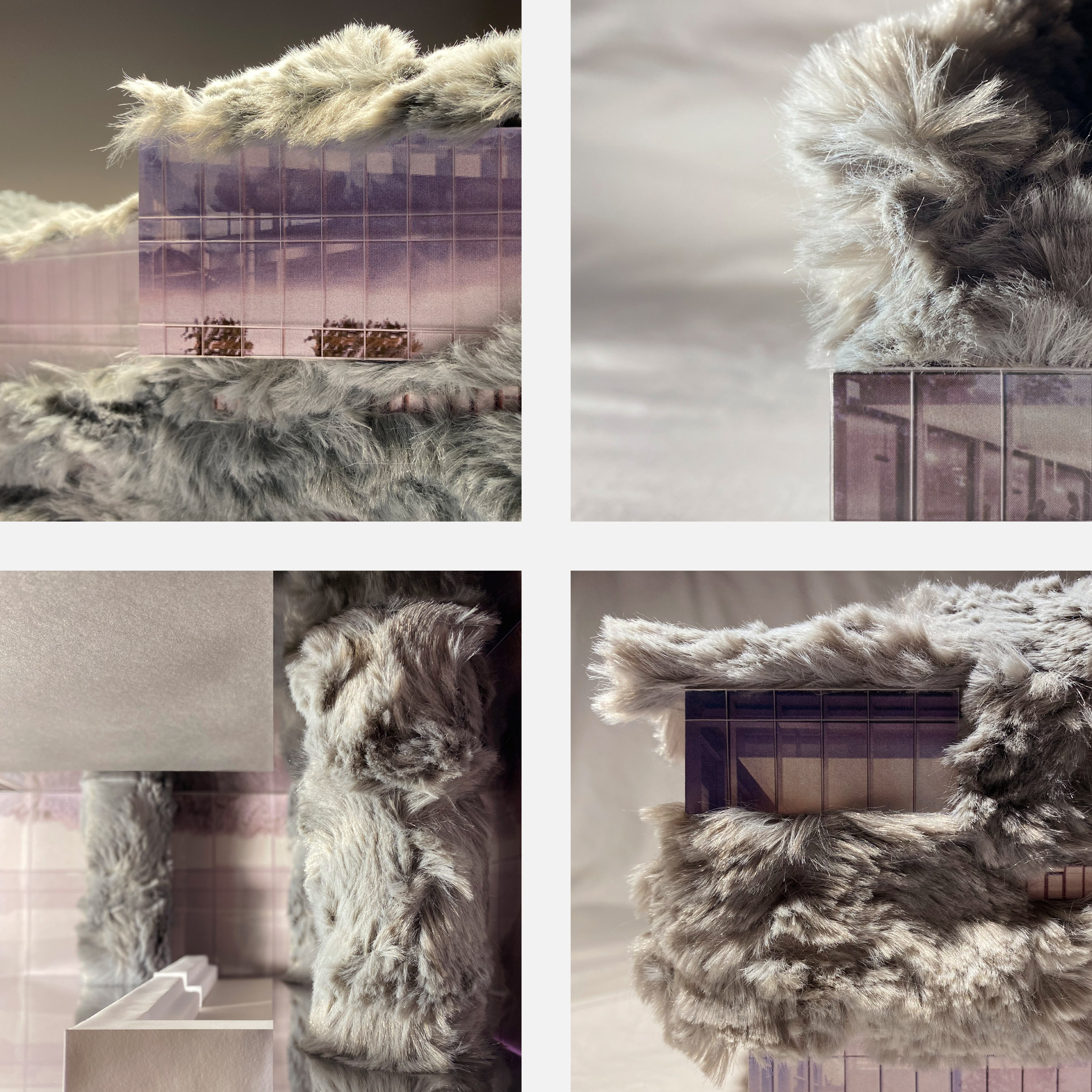 “Unlike simplistically contextual architectural objects that mimic the vernacular forms and materials of their surroundings, this project instead presents the building as a subject within constructed space. It proposes to replace the existing hard-edged brick facade of the Center for Architecture and Environmental Design (CAED) with a ‘fuzzy logic’ of voluptuous variation.

“The corners have been rounded and the roof has adopted its own lush formal language. The resulting model, therefore, reads like an independent furry creature, rather than merely a fur-clad building. Supergraphic effects of softening edges and blurring boundaries respond to the studio prompt to use techniques from photography to inform architectural design decisions.

“Here, the lens of the camera and the frame of the photograph help to refocus attention on photographic techniques involving issues of lighting, composition, alignment, and depth of field. As building becomes a body, architecture emerges as image.” 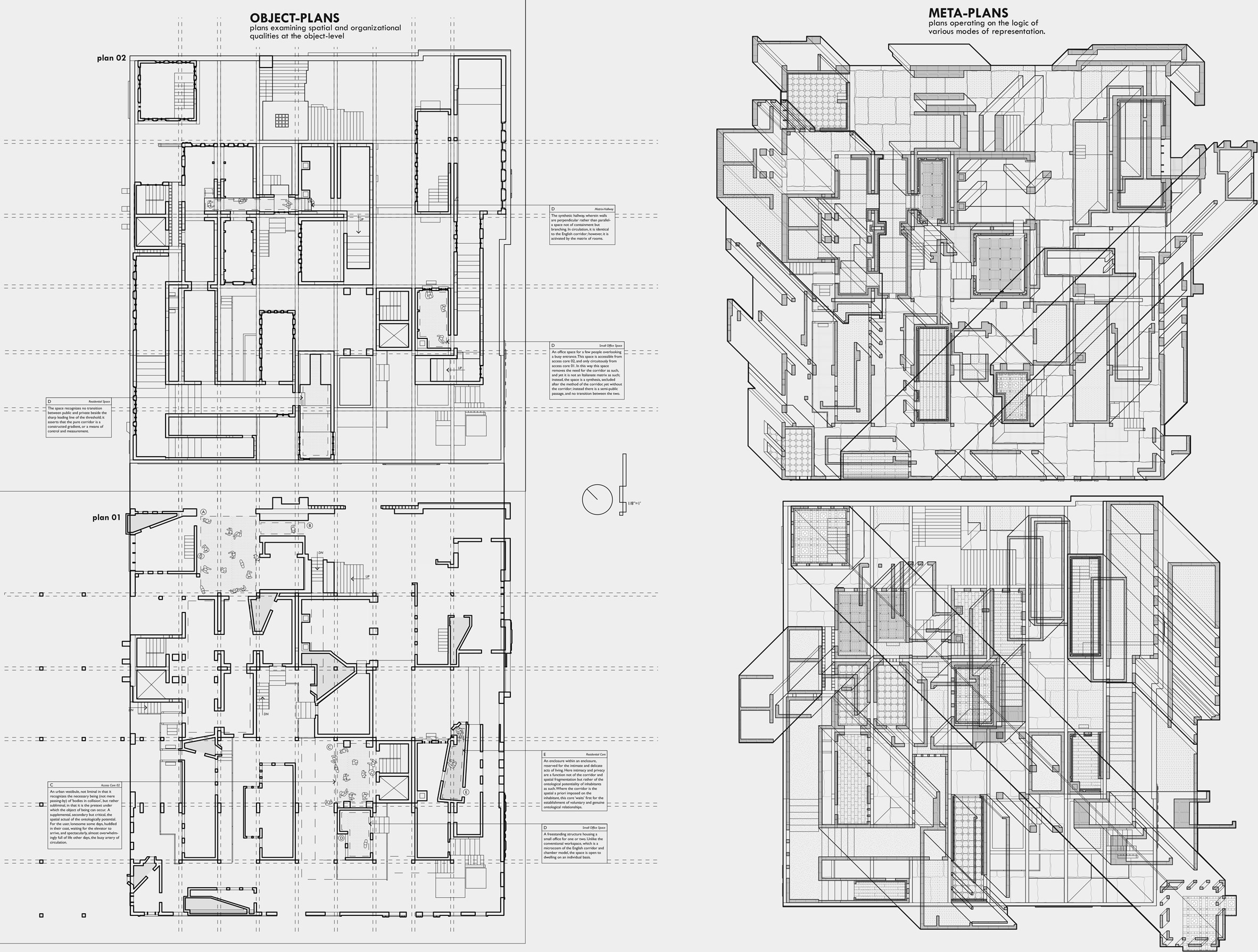 “This project is concerned with the historical development of urban spaces as it relates to the specificities of building. As such, it is situated in the hollow shell of an existing building in the east of Cleveland – an abandoned warehouse on an underdeveloped site. The project takes as its premise the decay, preservation, interpretation, reinterpretation, abandonment, and reoccupation that urban spaces undergo as part of their historical being over time.

“The shell of the warehouse is therefore filled with new volumes and voids – these are derived from a process wherein specific operations, suggesting the various forces which act on the historical space, or the space over time, are used to simulate the historical process as something that may be designed. The building, therefore, deals with the general conception of a historically-minded construction as well as present realities of a post-industrial city, such as Cleveland. In doing so, the project at large presents a potential mode of development well suited to such realities.” 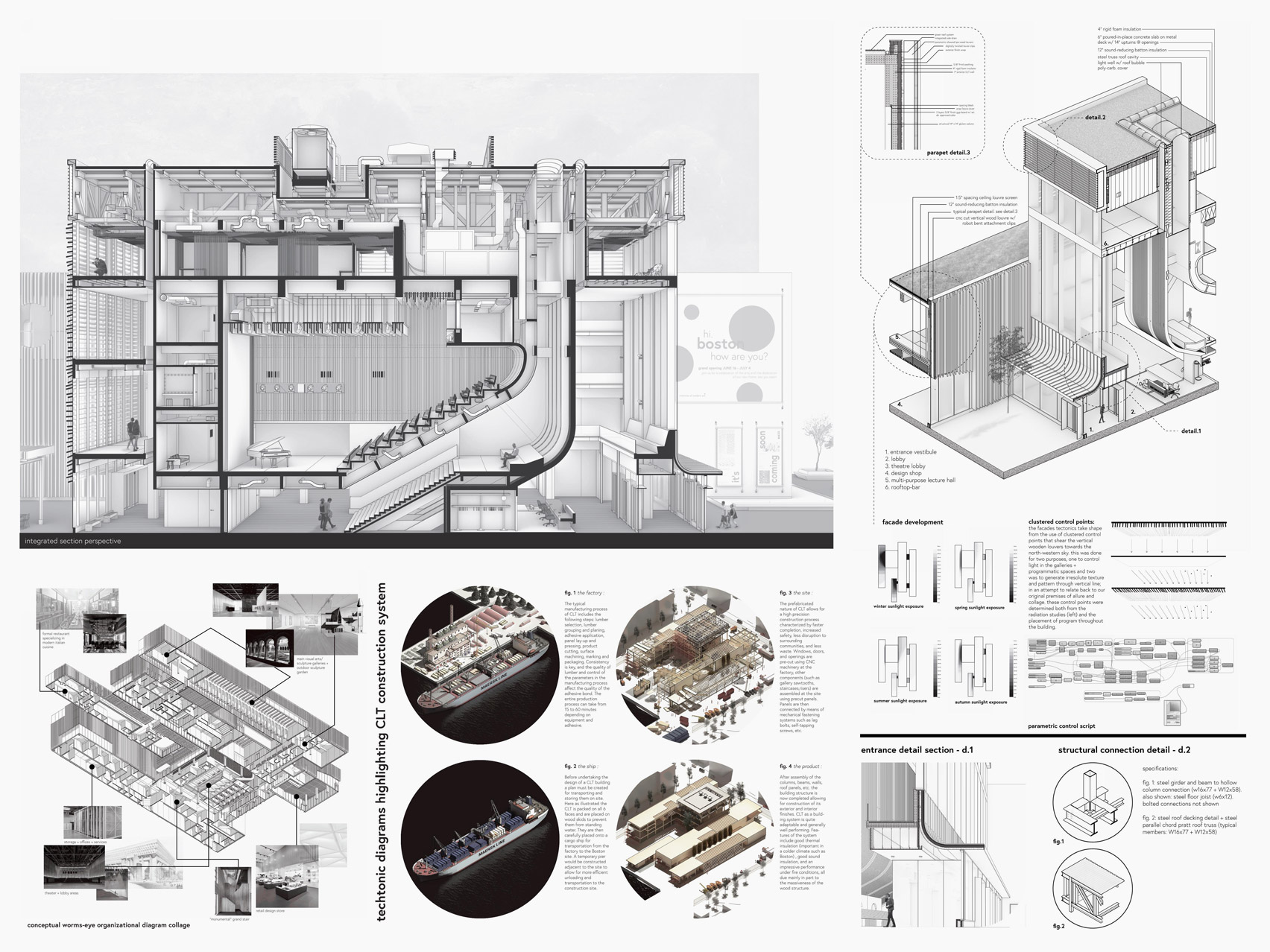 “This museum design looked at contemporary ideas about allure and collage to produce deceptions and irregularities in the project to draw the user in. We pose to question in this post-digital age of architecture what it means to be simultaneously object and field. This ideological approach hopes to generate a museum that acts as an art collection in itself, a museum of differences where rooms and the art subsequently contained not-quite-rightly come together, producing a maze-like and mysteriously fascinating spatial experience.

“With surprises through rooms, unexpected details and controlled views, these collections are then resolved by the nominal exterior forms that pile together on the site to mimic and stitch itself into its urban context. The facade then works to disillusion and trick the eye with its repetition of parametric vertical wooden louvres, the systems ability to shear and distort softens the edges and surface of the bars making them flicker between field and object in elevation as Paul Rudolph did in concrete with surface textures.

“We challenged ourselves with the use of line and texture in the design of the facade system on the interior, material choices augment the typical and wall construction techniques challenge the everyday. The use of CLT allows for versatile construction while pushing forward the industry in the American market.” 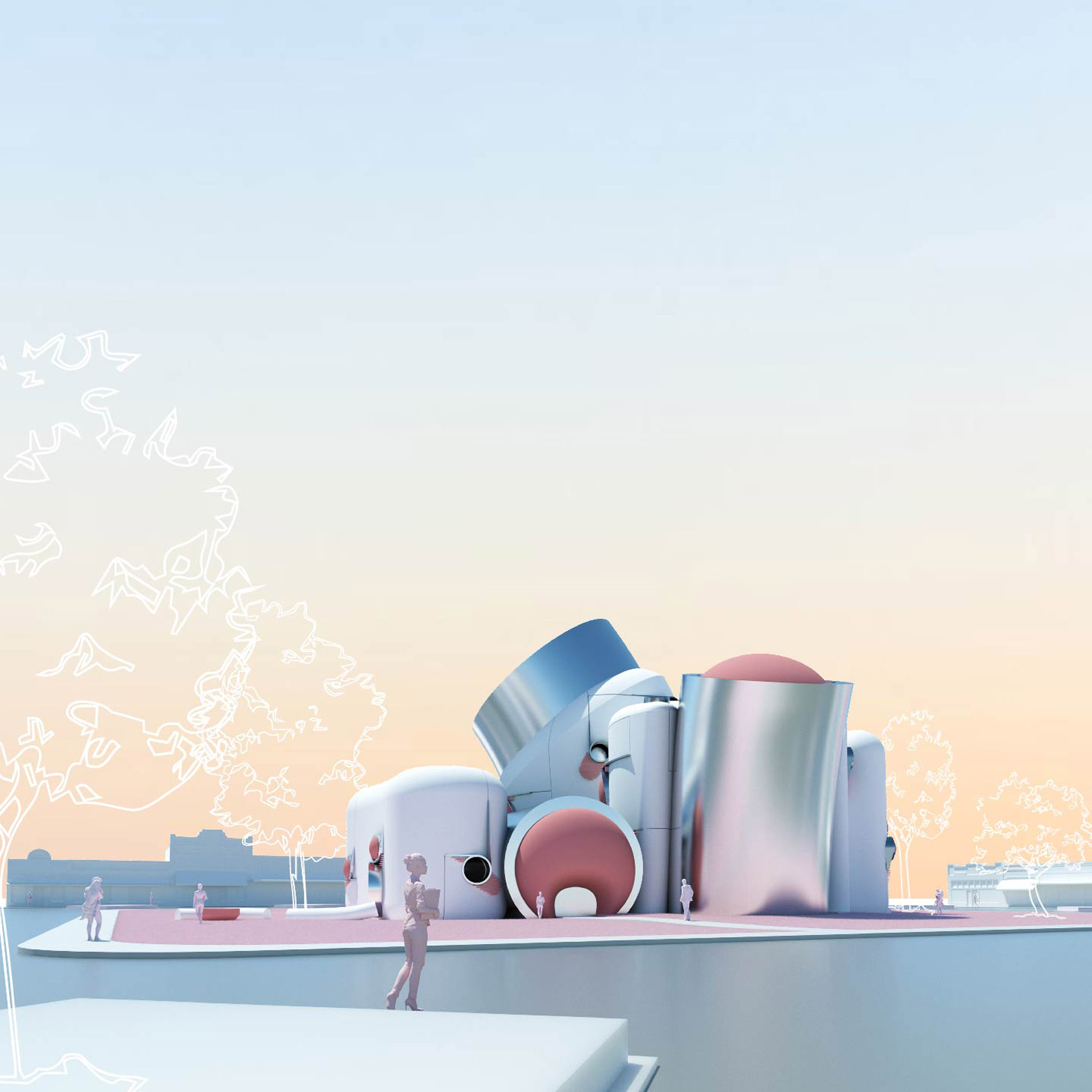 “This project creates form via a panel system that alludes to an everyday object, the button, which is used to impose or imply formal association. The button is looked at in terms of materiality, functionality, and material properties.

“The button-like panel systems consist of a button case, free-flowing joints, and low resolution projected shadows. Each attribute serves an overall goal of creating an allusive formal and material system with enough attributes to easily address architectural and pragmatic issues.” 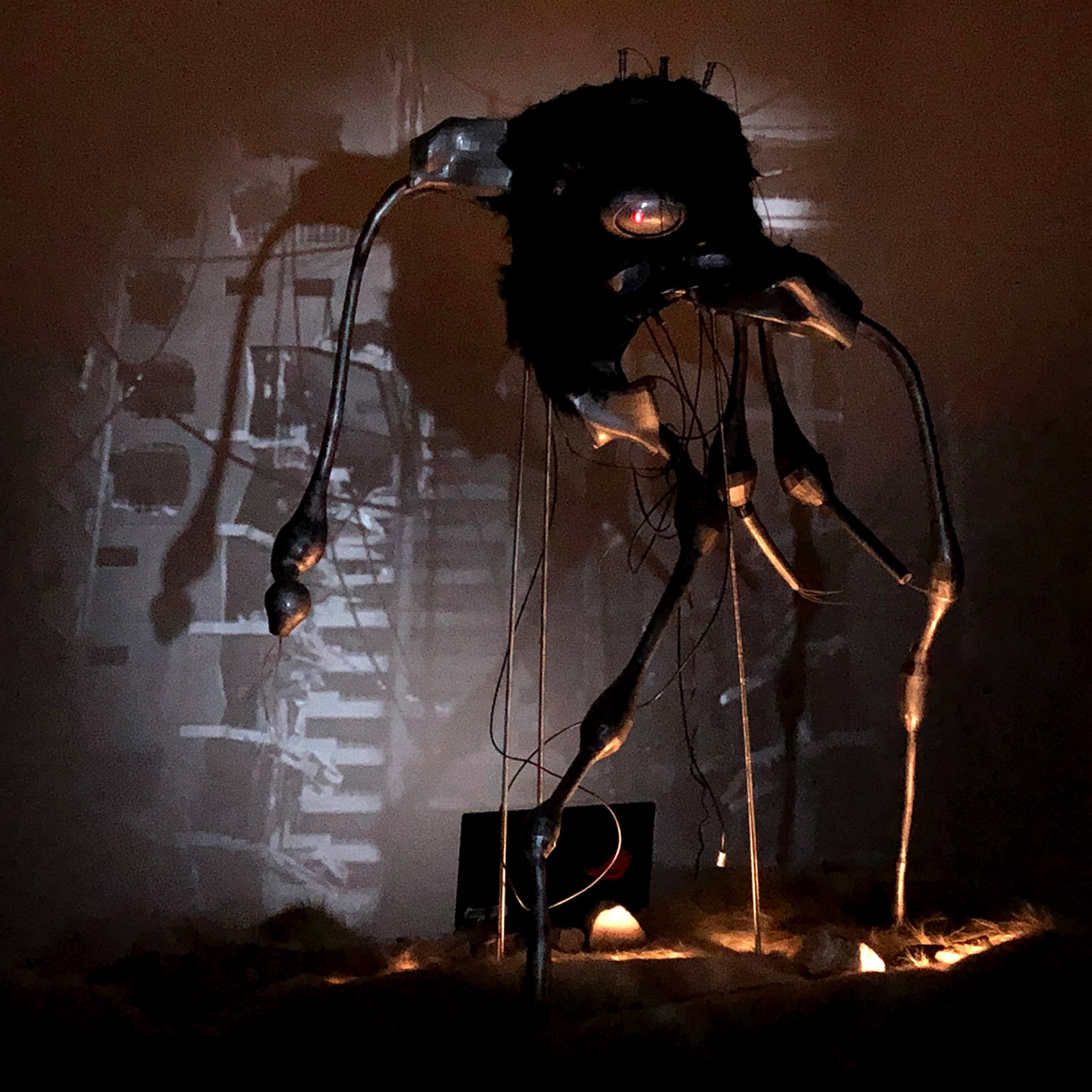 “Rooted in the disciplinary and interdisciplinary interests for IoT (Internet of things) and smart houses, Cyborg Pet studio investigates the physical and digital design, experience and immersion mediums, to question how designers can interact with design platforms to create spatial qualities for humans and non-humans through storytelling, narrative and experience creation.

“As part of an installation-based studio, each Cyborg Pet installation tries to blur the boundaries of UI and UX through a seamless cyber-physical-hybrid experience setup, where each one of the agents in the process – human, robot, and non-human – are simultaneously part of the design process, space creation, and subject to experience the outcome of the process.” 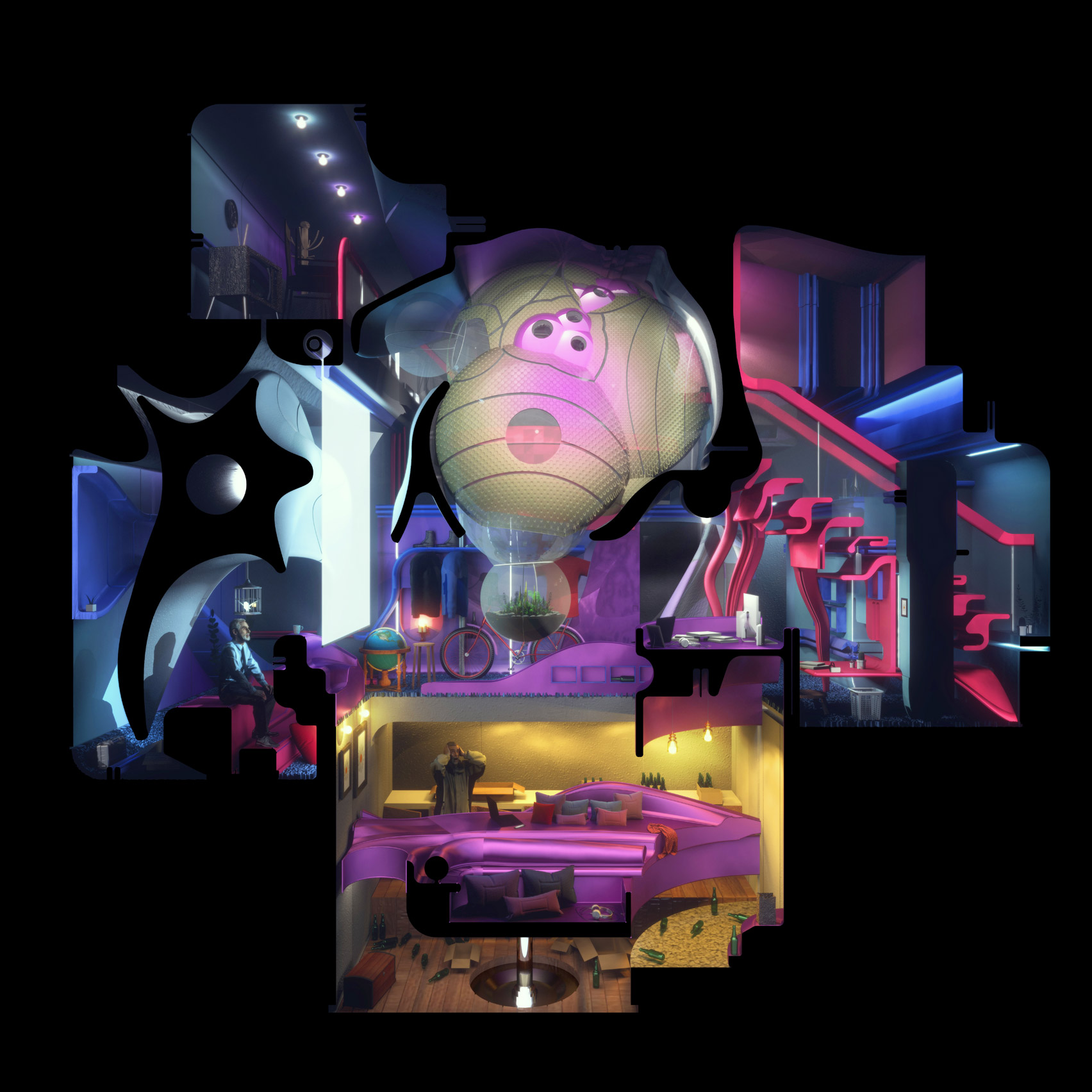 “In this project, I was interested in exploring the duality of two individuals and the spaces they inhabited. The ‘high’ end and ‘low’ end spaces were defined through their lighting, colours, and everyday objects that filled the spaces.

“In each room, bedroom, dining room, kitchen, hallway, and living room, large masses were introduced. These were used to deform the relationship between the masses and their silhouettes.” 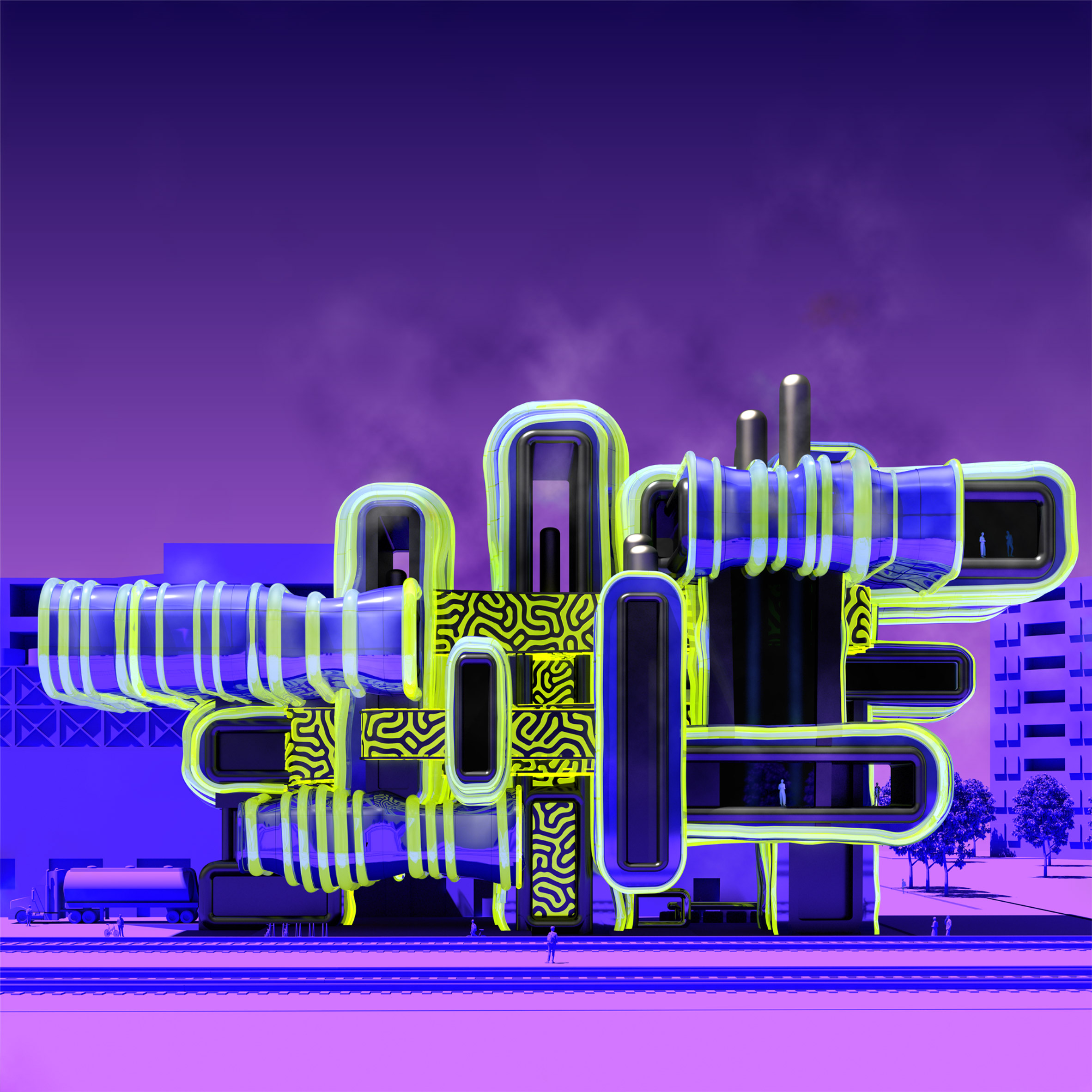 “Biofuel harvested from algae can be used to power an entire building. Energetic Algae is a proposal for a community fitness gym and biomass power plant that utilises the algae harvesting process and turns it into a series of signifying architectural elements.

“The algae farm becomes a facade of forged tubes, accessing external sunlight while connecting to internal processes for extraction. The facade for the gym resembles brain patterns, gesturing it as the control core of the building with endorphins generating motivation within its users.

“The plant program acts as the muscle behind industrialisation, resulting in a facade featuring tubes resembling muscular striations. The form of the plant program is a cluster of vertical and horizontal slots that contain emission stacks and surround the gym as if protecting the brain. Conversely, the gym program is housed in forms featuring soft curves, embodying grey matter. Small hallways for the gym penetrate through the ‘slots’ housing the plant program. Consequently, views of stacks and piping are scattered throughout the gym creating moments where users interact with the processes of the plant.” 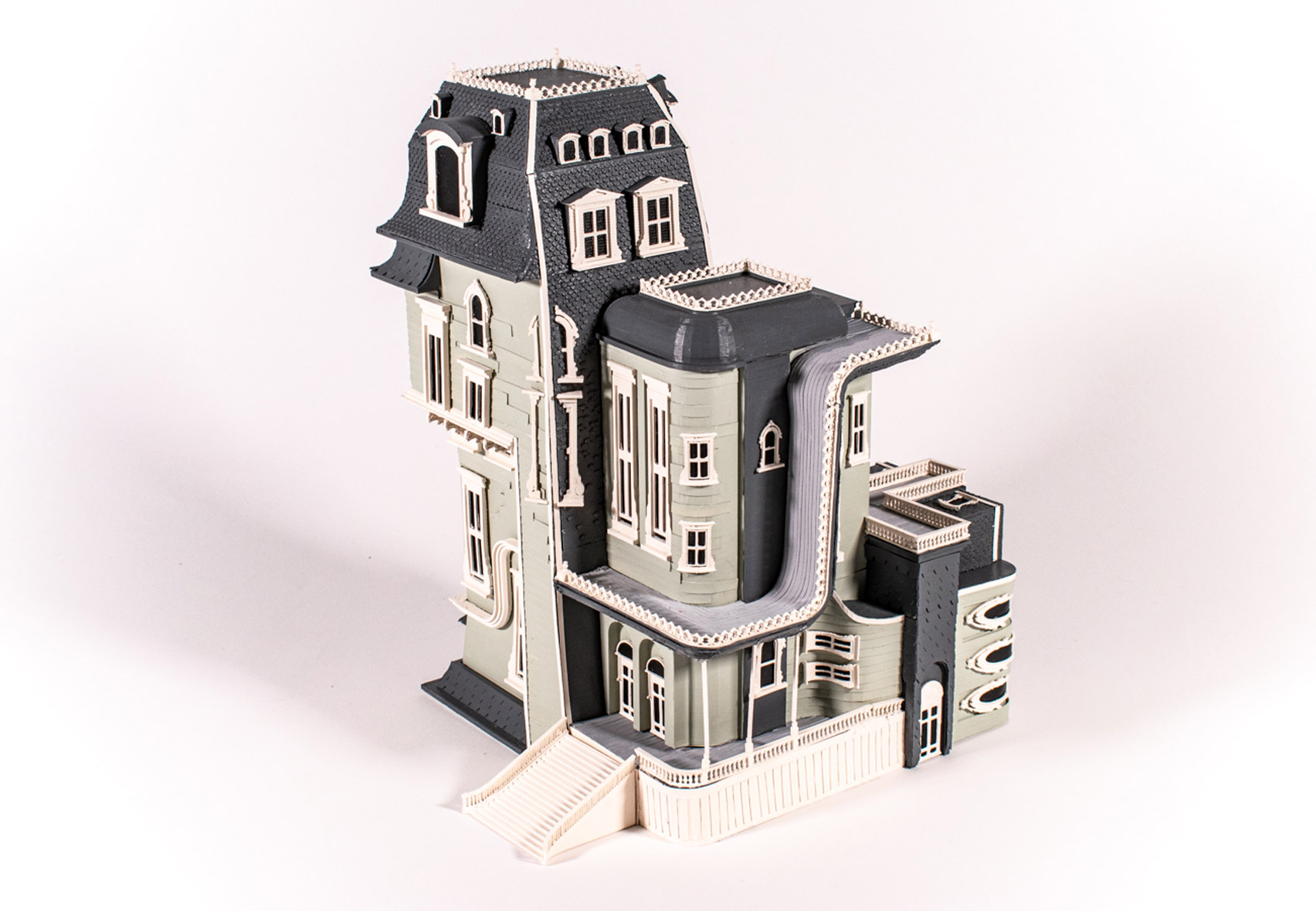 “The Second Empire American residential style is a combination of borrowed archetypes with its French-inspired mansard roof and Italianate lower mass – a heavy, pronounced cornice distinguishes the two domains of the building.

“This project aimed to express the ideas of ‘almost-ness’ as depicted by Shewail and Zimmerman – the appearance of something having qualities of the original thing but arranged in a ‘not quite right’ orientation, or appearing incomplete. The cornice breaks away from the defining edges of these two distinctions, blending the two together in an attempt to bring the antique residential styles to the conversation of the digital age.”

Virtual Design Festival’s student and schools initiative offers a simple and affordable platform for student and graduate groups to present their work during the coronavirus pandemic. Click here for more details.