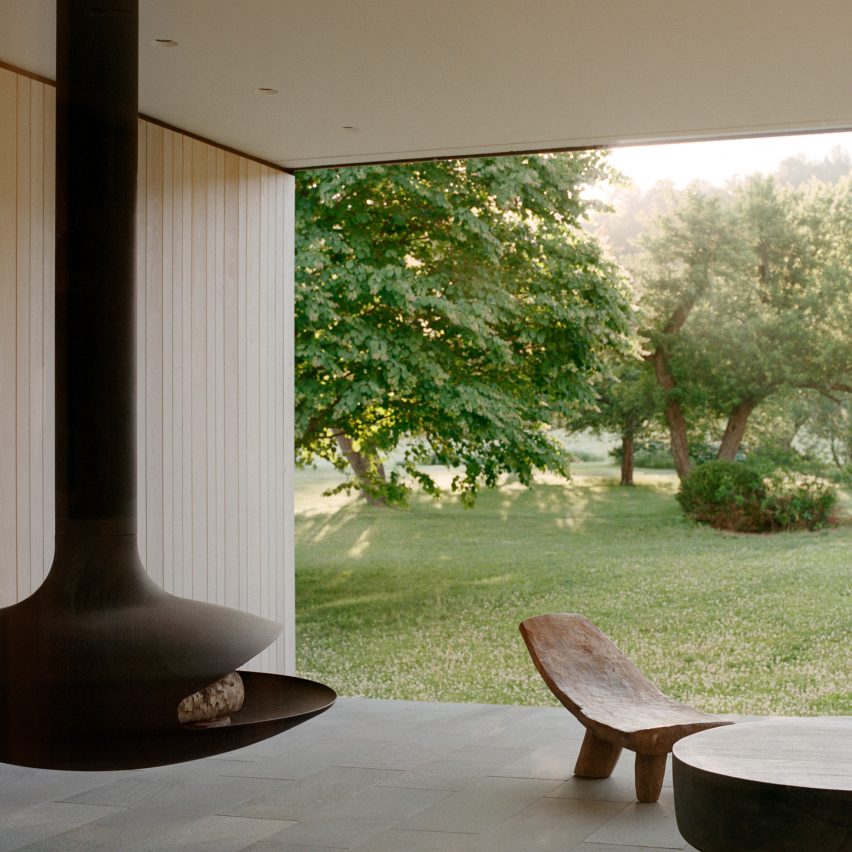 New York studio Of Possible has designed Sheffield House in Massachusetts to replace the resident’s childhood home with cedar walls as the “picture frame of the spaces of memory”.

The residence is located in Sheffield, a town in Massachusetts’ Berkshire County, replacing the client’s parents’ property, which was moved to another site and is now the home of their sister. 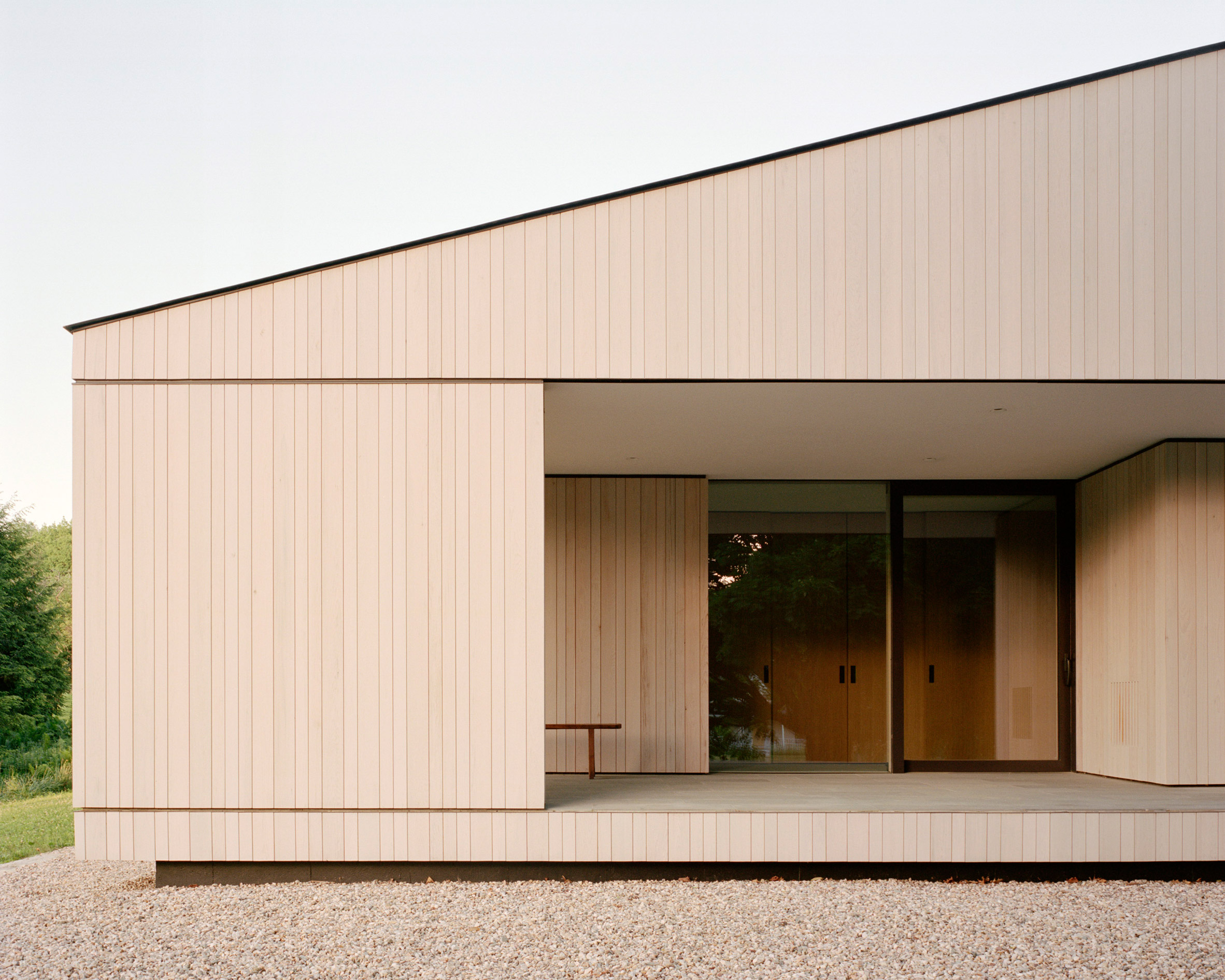 Brooklyn architecture studio Of Possible punctured the pale cedar walls of the 3,600-square-foot (334-square-metre) home with large glass doors and windows to offer views of its lush settings – reminiscent of the client’s childhood.

“The clients were looking for an architecture that engaged the memories of the original home on the site from their youth, which included an apple orchard, barn, and horse corral to the east, a long yard and gardens to the south, an evergreen and wetland ravine to the north, and a grand maple tree with a 70-foot (21-metre) canopy to the west,” said Of Possible. 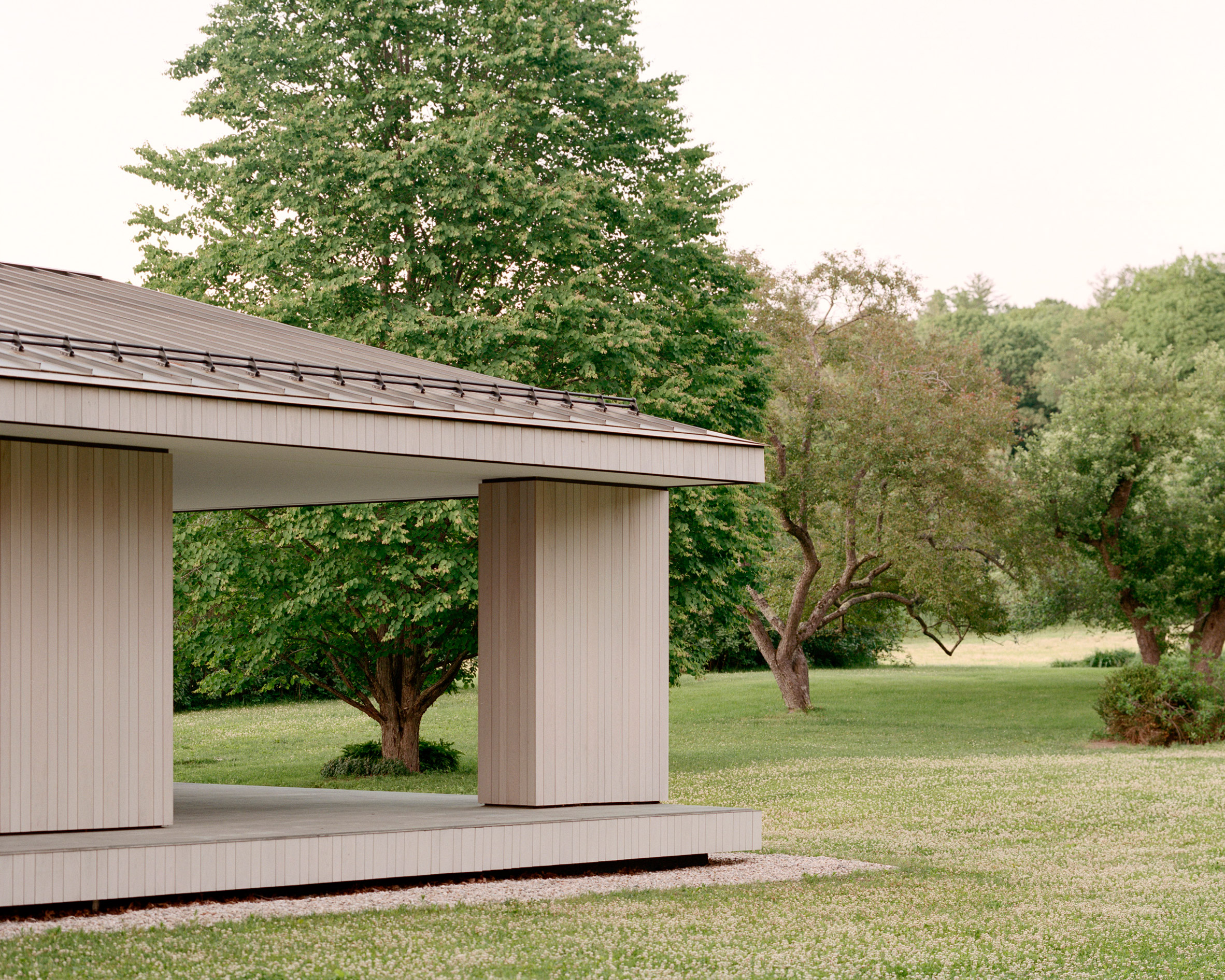 “The result is a home where every window and door is a floor-to-ceiling picture frame of the spaces of memory throughout the property,” it added.

Sheffield House is covered in boards of Western Red Cedar finished with a mix of bleach and pre-weathering stain, in order to create an even weathering and to contrast the lush surrounds. 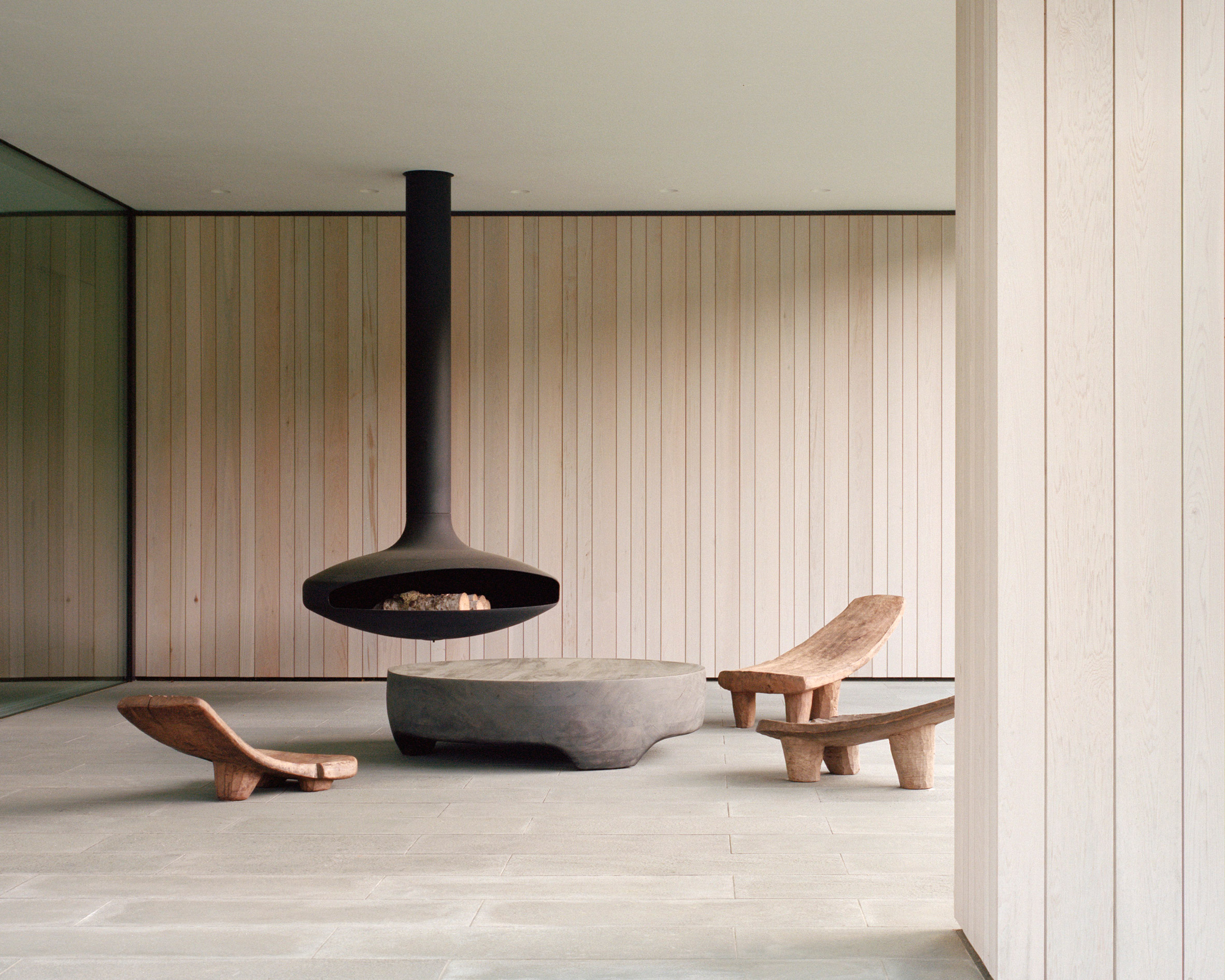 “The architectural finishes are a sober palette chosen to enhance the effect of these frames against the ever-changing seasonal New England landscape,” said the studio.

“The finish will ‘live’ through the life of the building and eventually weather to a silver-blond-grey.” 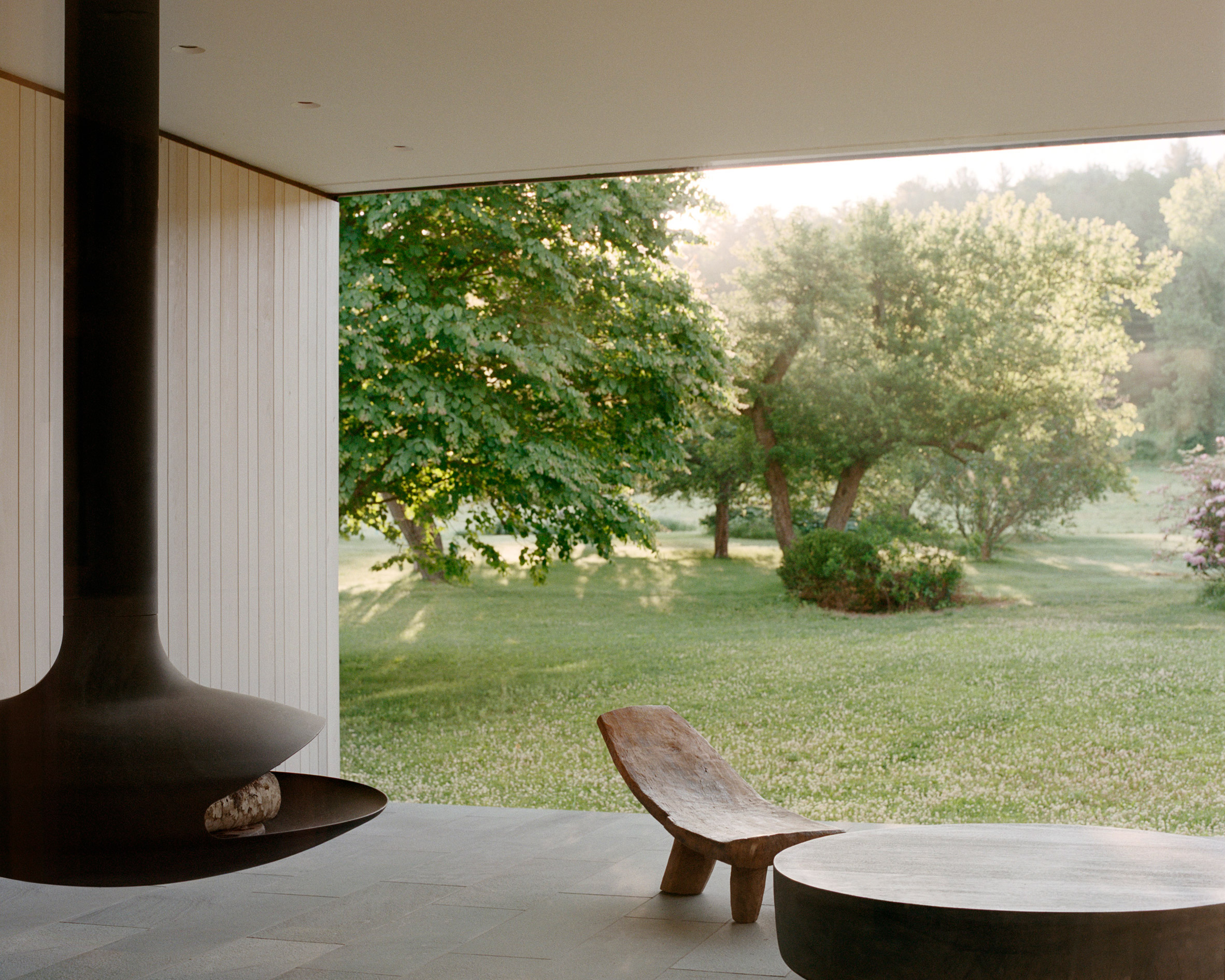 The slim vertical planks cover the house in three parts: the edge of the floor, the walls and the low-slung gabled roof. They line up to create continuity across the exterior, with just two black horizontal lines forming a break between them.

Other details are the edge of the ground floor designed to hang over the foundation to give the appearance that the house is “floating”. 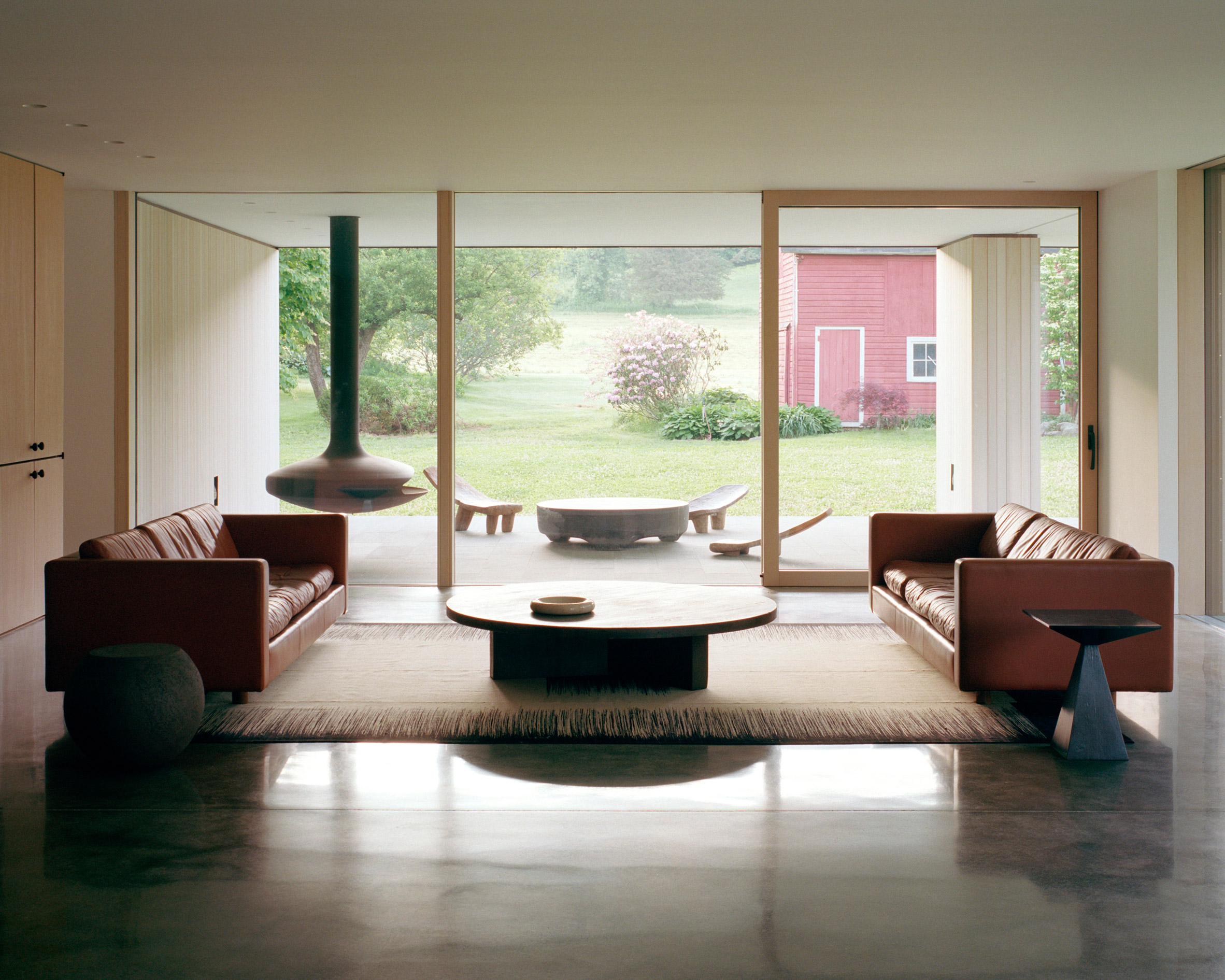 The roof is metal standing seam to reference to nearby agricultural buildings and has no gutter to maintain a seamless look. Instead, gravel and subsurface drain manage runs around the perimeter of the house on the floor. 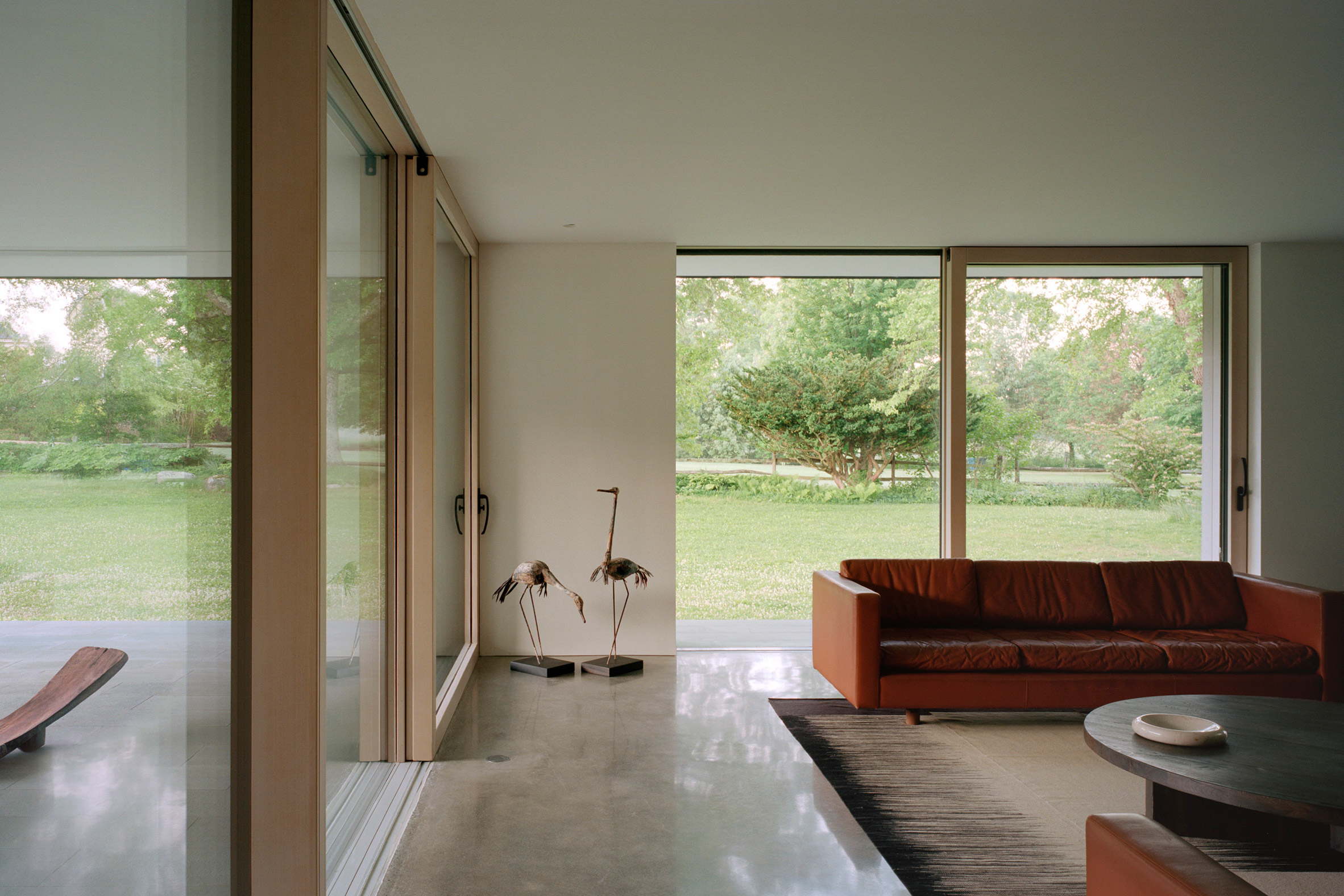 Large sliding glass doors interspersed with chunky cedar-clad columns run along the southern wall, culminating in a large terrace in the southeastern corner that faces the apple orchard.

Chalky blue-grey stone tiles sourced from a quarry in New York State cover the floor of the east-facing terrace to complement the subdued material palette to feature across the property. The outdoor space is finished with a hanging black fireplace, a rustic, dark wooden table and low-slung, rough wooden chairs. 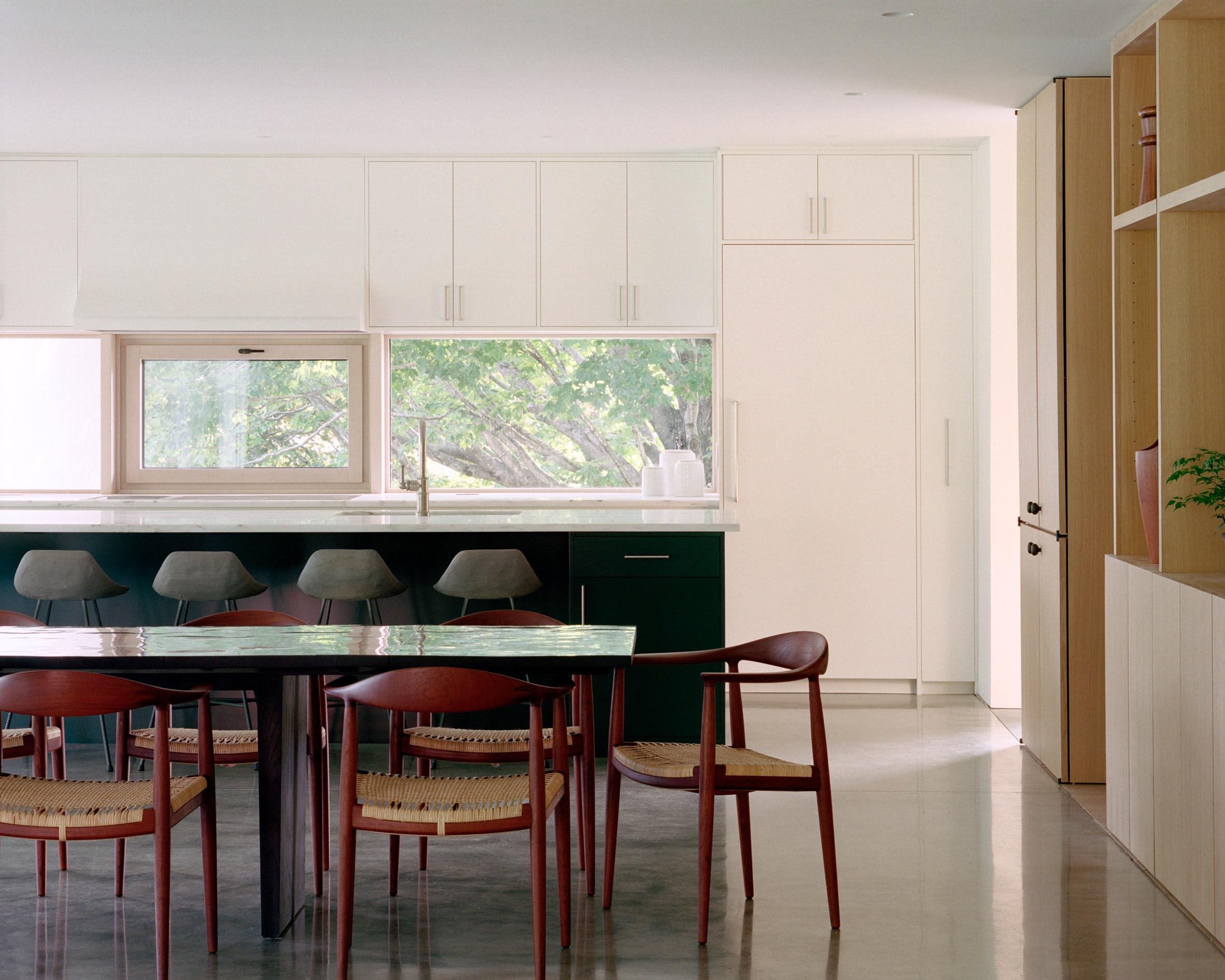 A sliding glass door opens into the open-plan lounge, kitchen and dining room, which have polished concrete flooring whose thermal properties work to cool in the summer and warm in the winter.

Pale wooden cabinetry runs along the interior wall complementing the frames of the glass doors. The kitchen counter, meanwhile, is built into the rear wall with a glass window forming the splashback. 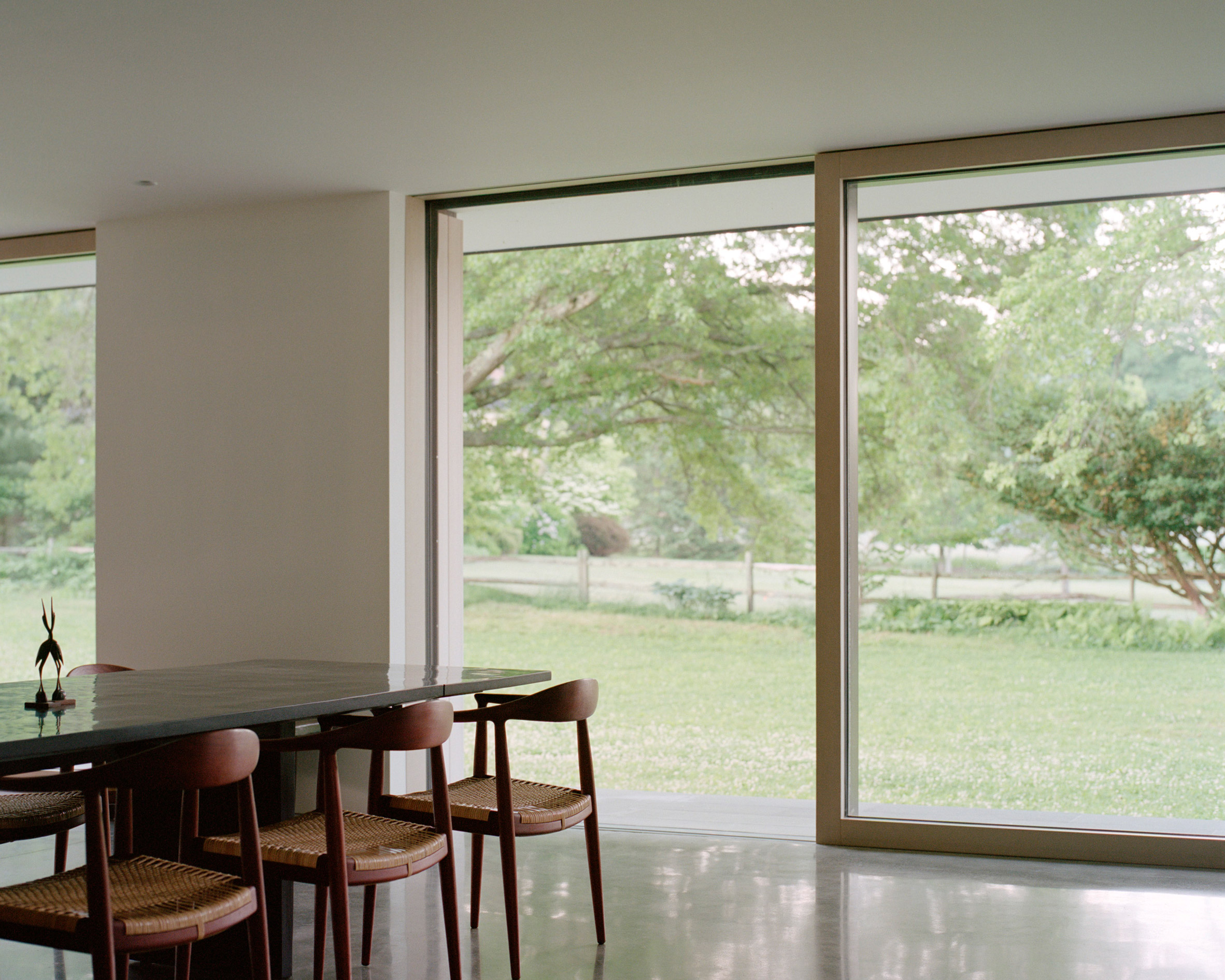 Three hallways lead from the southern side to the bedrooms and the library on the north. They run between a series of bathrooms that form the central spine of the house.

White-oak boards cover the floors in these rooms as contrast to concrete, while walls, ceilings and doors are all painted white. There is also a basement on the northern side with a wine cellar. 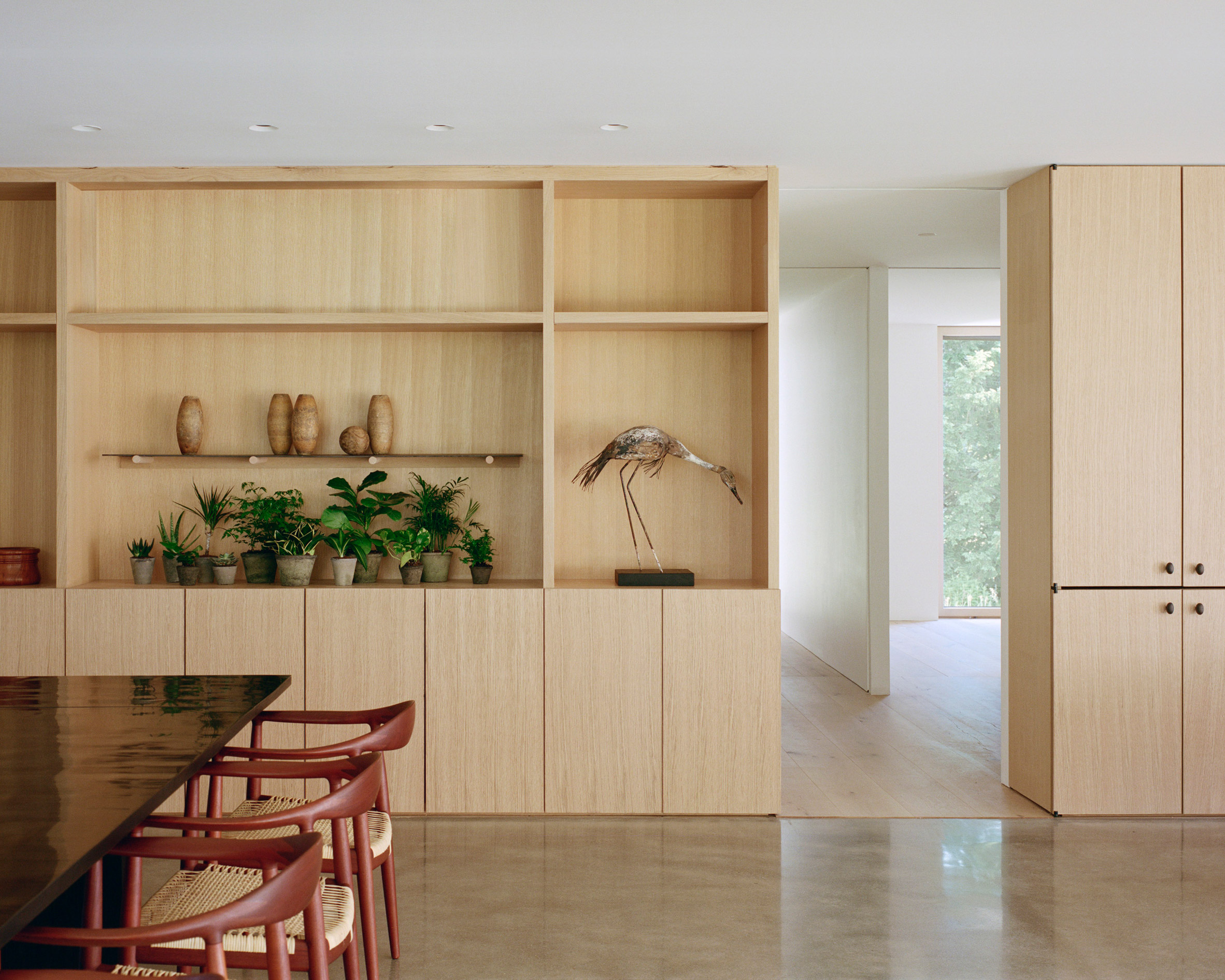 Of Possible completed Sheffield House with Kent Hicks Construction and Energy Efficiency Associates in Massachusetts to achieve Passivhaus standards of low-energy design, although it is not certified. Details chosen to achieve this are super-insulated walls, Passivhaus certified windows and discrete motorised shades so the house doesn’t overheat.

According to the firm, the house is a blend of the agricultural aesthetic of the local area and contemporary advancements. 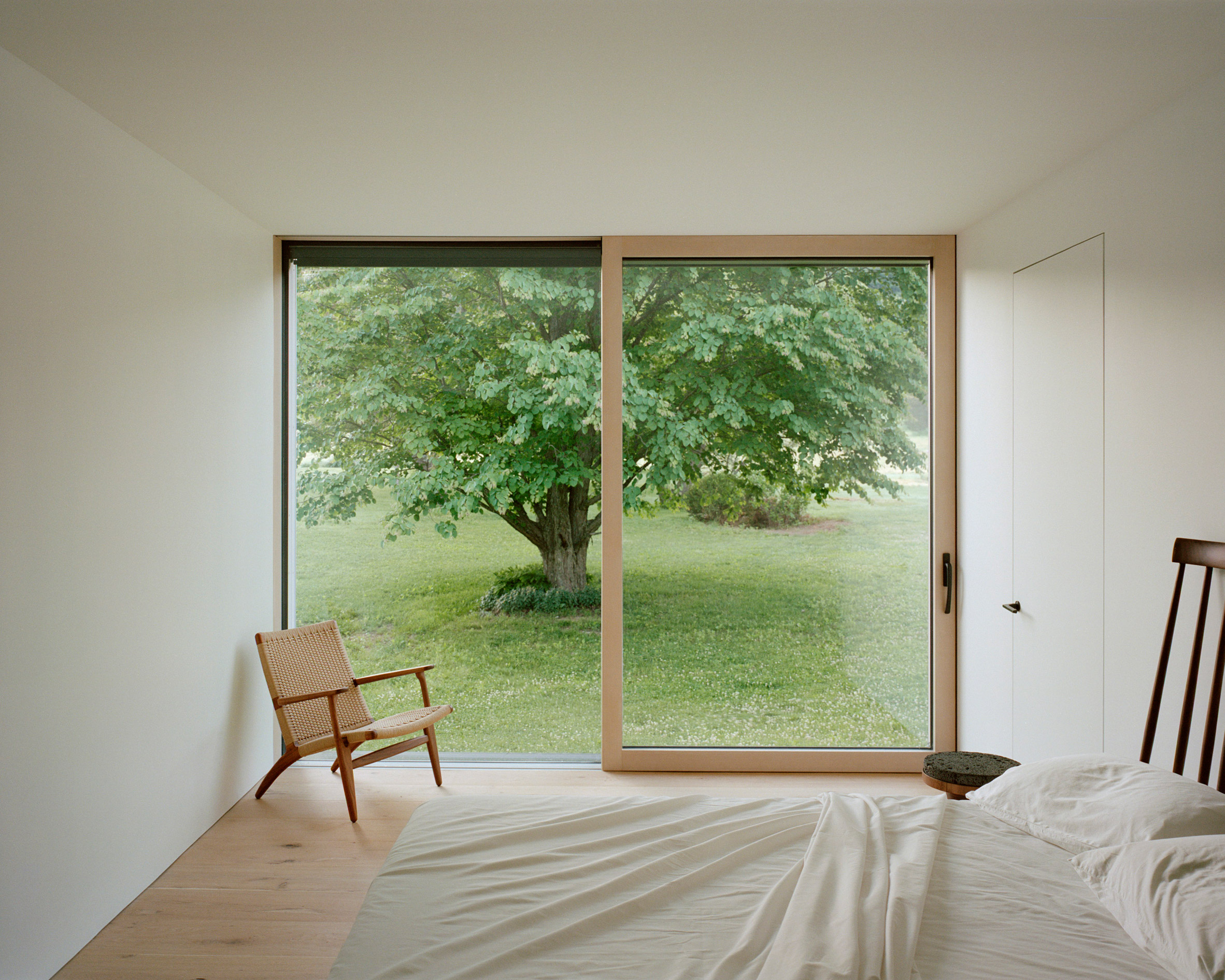 “The timeless craft of traditional New England construction is met with the most advanced building science principles and technologies resulting in a contemporary expression of rural American architecture that will last for generations,” Of Possible said.

Massachusetts is a state in the New England region of the United States. Other projects in the area include the three-storey “creative sanctuary” or a couple to write, garden and repair antique scooters. and an angular house wrapped in aluminium shingles.

Photography is by Rory Gardiner.