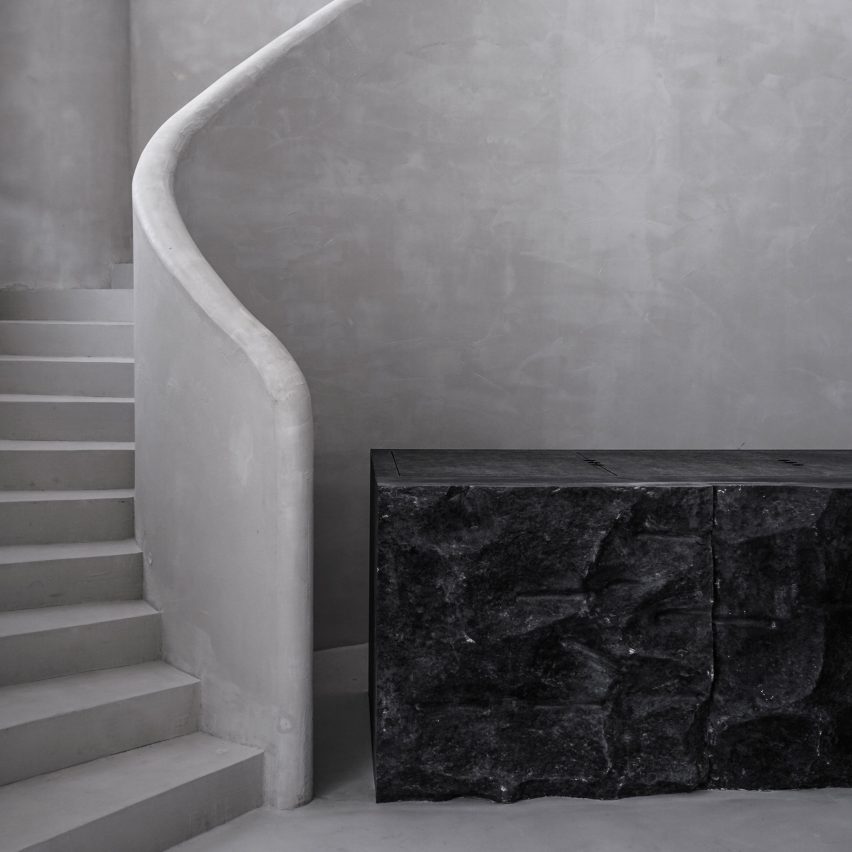 The “warm sense of the future” depicted in sci-fi movie Her informed the soft grey workspaces that Tra & Xi Studio has created in the Beijing office of furniture brand Fnji.

The 1000-square-metre Fnji office is located northeast of central Beijing in the city’s Shunyi district.

Tra & Xi Studio was tasked with developing a striking aesthetic for the new office. 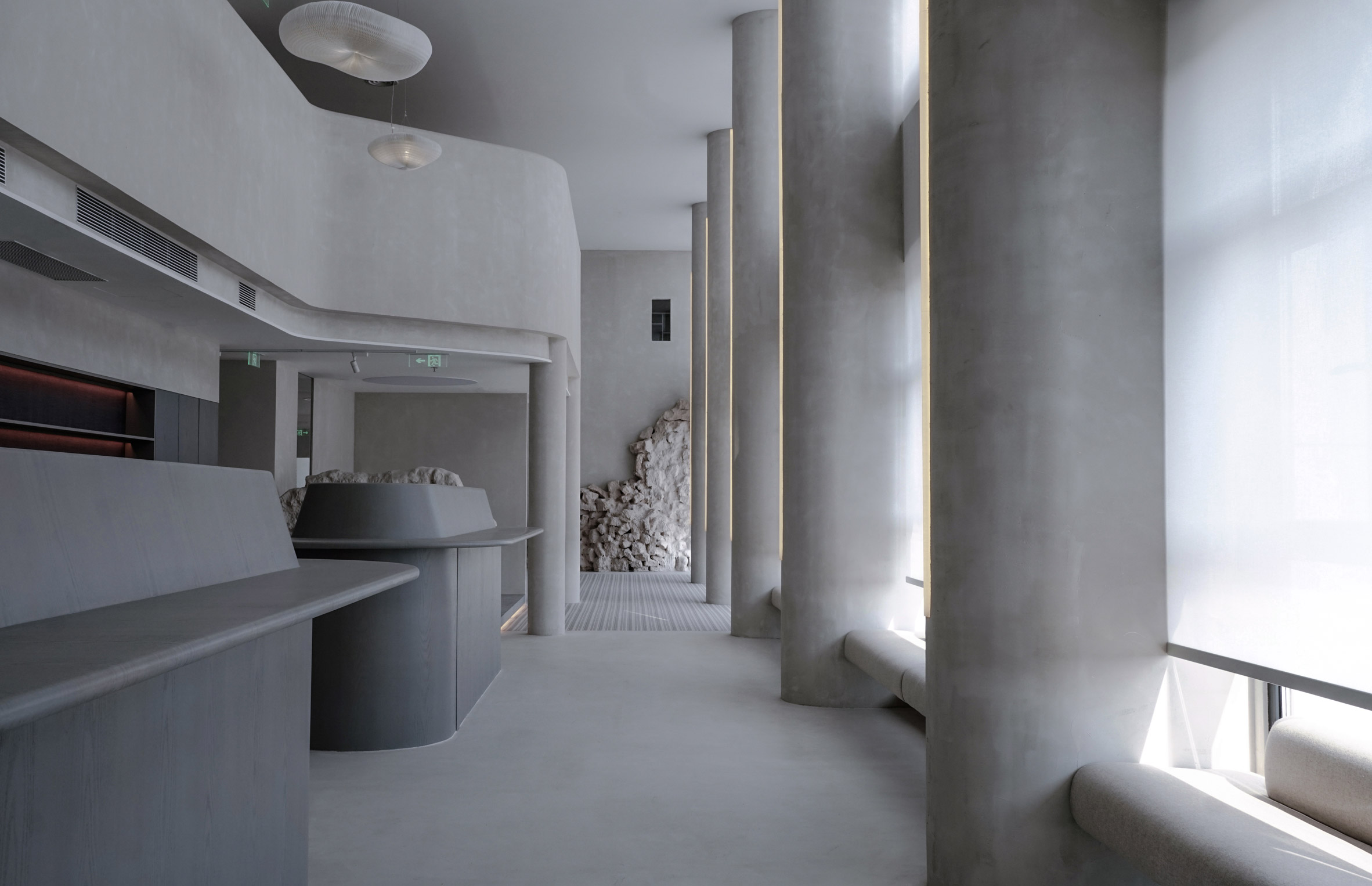 “As the urban planning policy is tightened in Beijing, the resource of distinctive office space is rare now,” explained the studio, which is led by Lin Yitong and Xiong Xiaoxi. “After long term research, we chose this space in the end.”

“Its attractive spatial advantages are the top-floor views, daylight, and the two floors which could be constructed freely.” 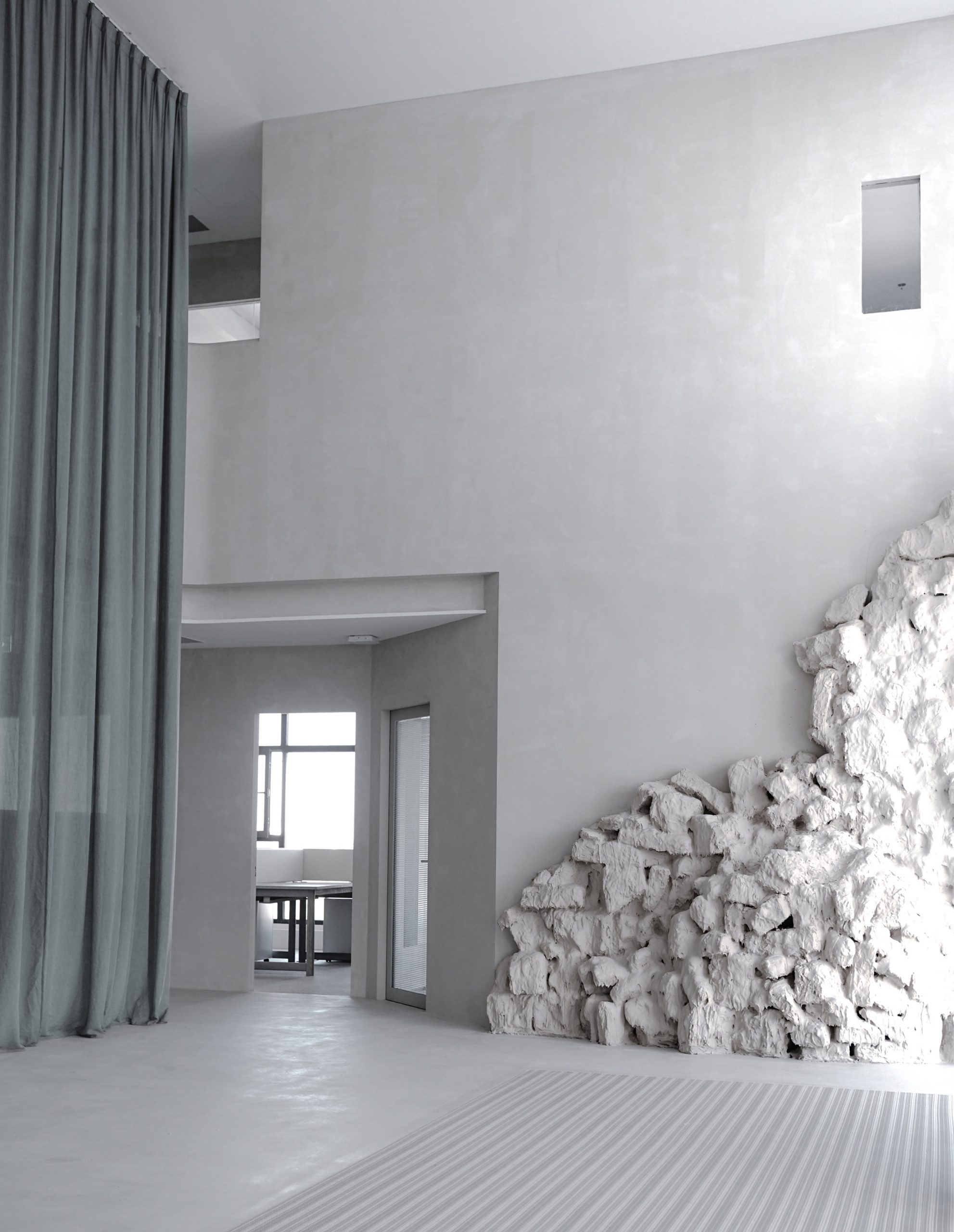 The studio wanted to imbue the office with the same “blurry and warm sense of the future” they saw in the 2013 sci-fi romance film Her, which chronicles how a shy writer gradually falls in love with an artificial intelligence system.

Almost every surface in the office – including the floors – has been washed with pale-grey gypsum plaster, selected for its ultra-matte surface finish. 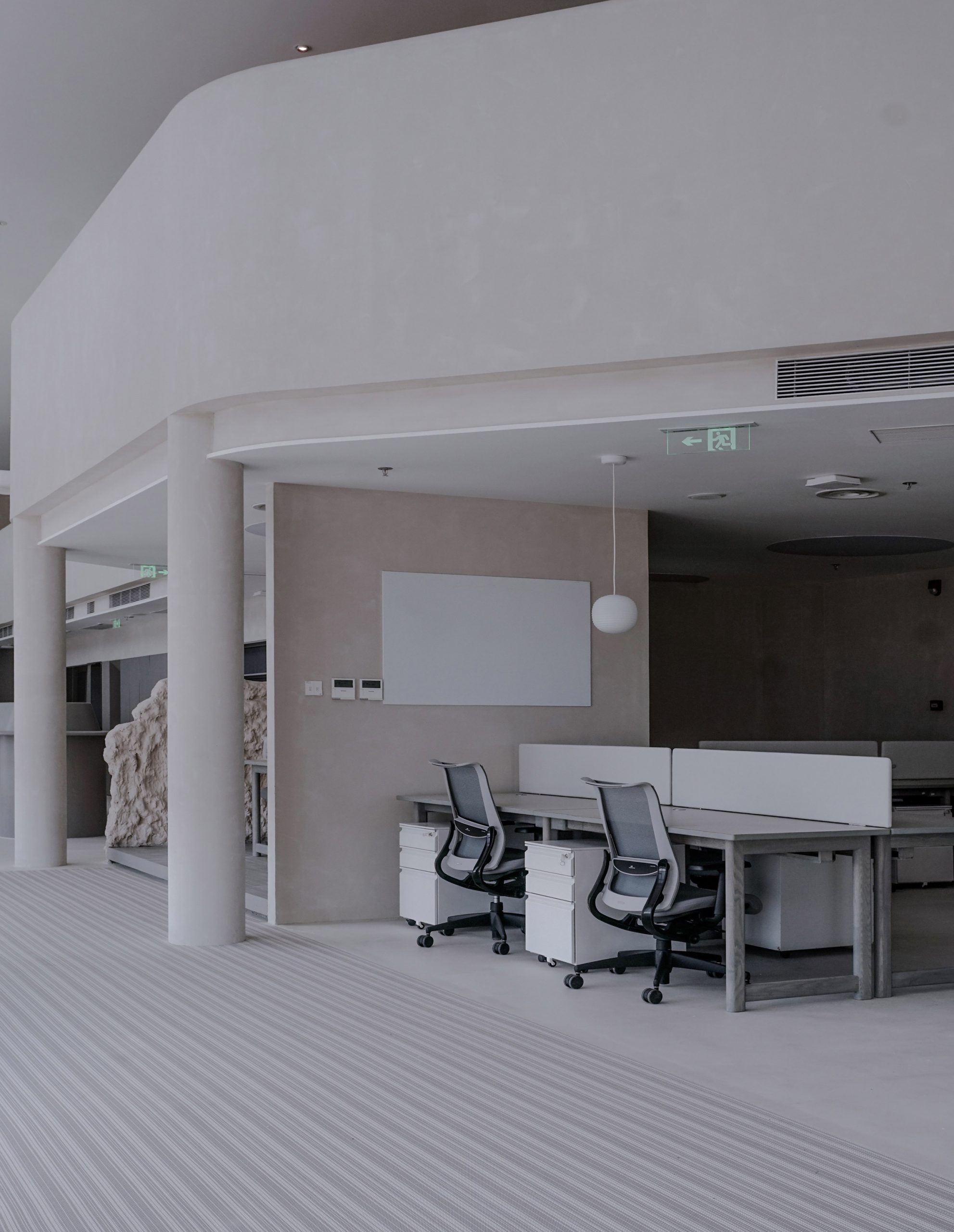 The plaster has also been made to cover the balustrade and treads of the curving staircase that leads up to the office’s upper level.

Towards the back of the lower level are a couple of textural feature walls, which the studio created by pouring semi-solidified gypsum over jumbled piles of broken bricks. 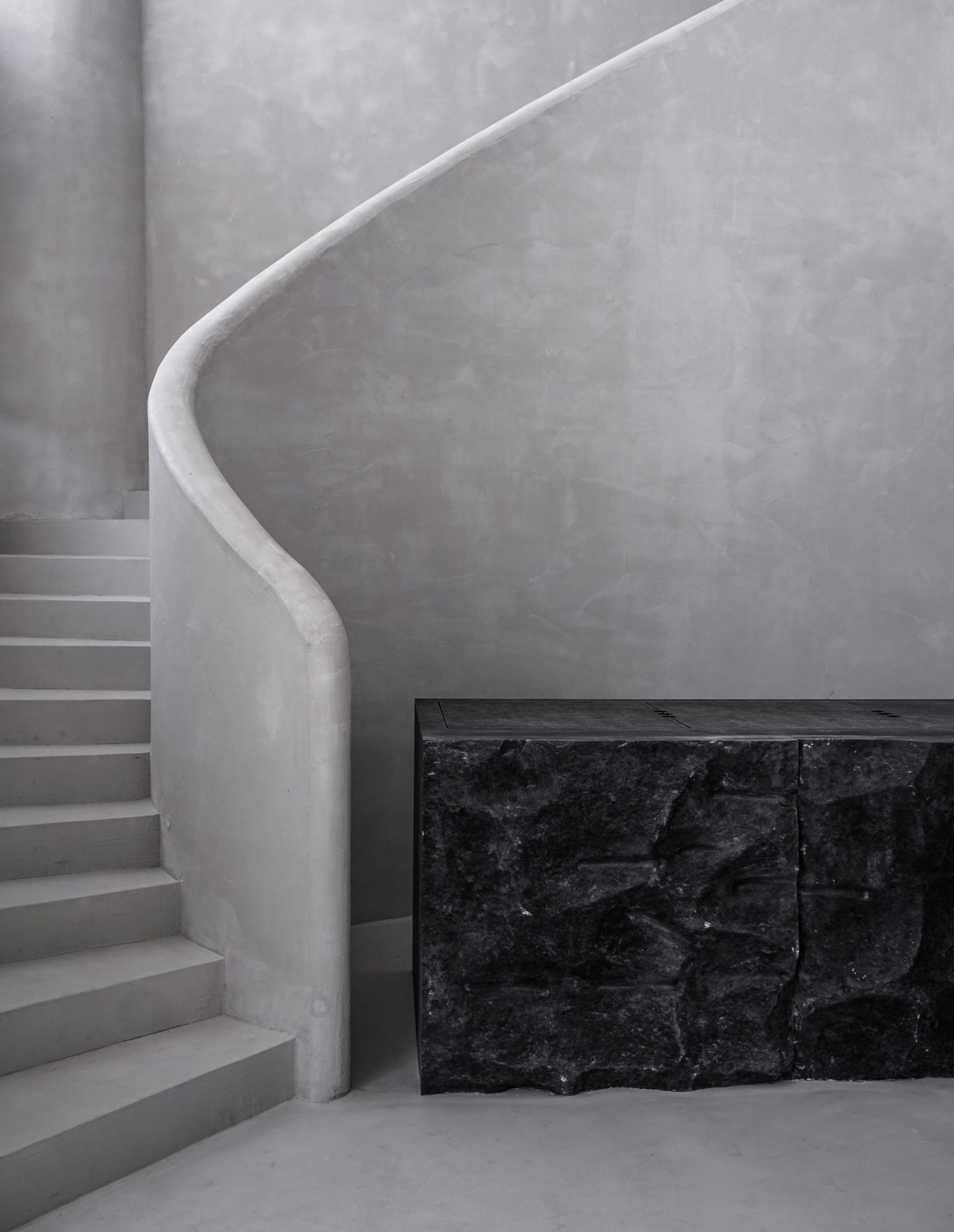 “It’s such an interesting process to recreate an installation with recycled materials,” Xiong told Dezeen.

“This work has a new life and exists in the space naturally.”

Furnishings throughout the office, from the work desks to the cushioned chairs in the glass-fronted meeting rooms, are also grey. 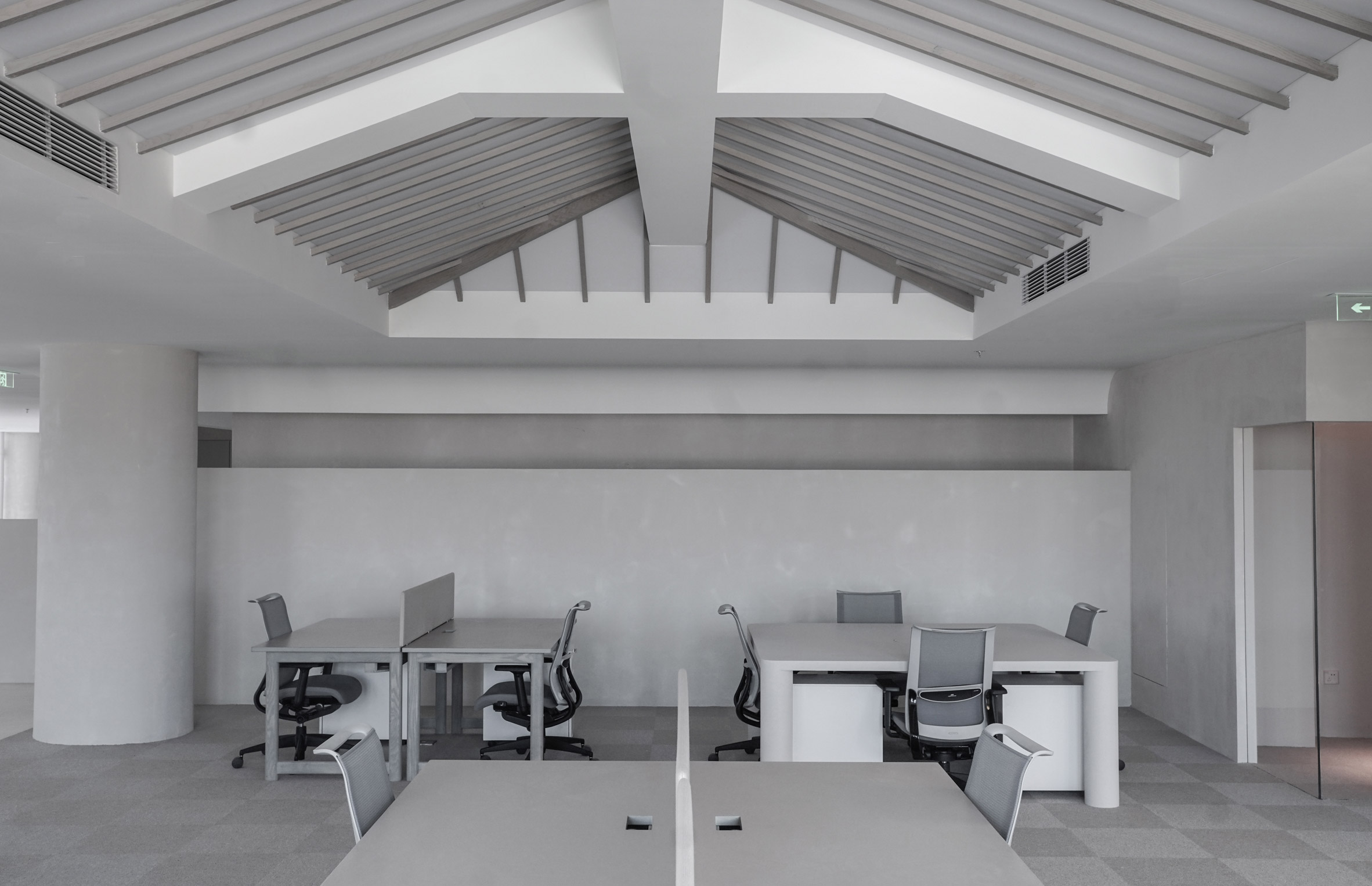 Two huge slate-coloured planters are installed on the lower level, and a sheer dark-grey curtain extends down from the office’s ceiling to the lower level.

Sections of the floor are also covered by striped or checkerboard-pattern grey carpet. 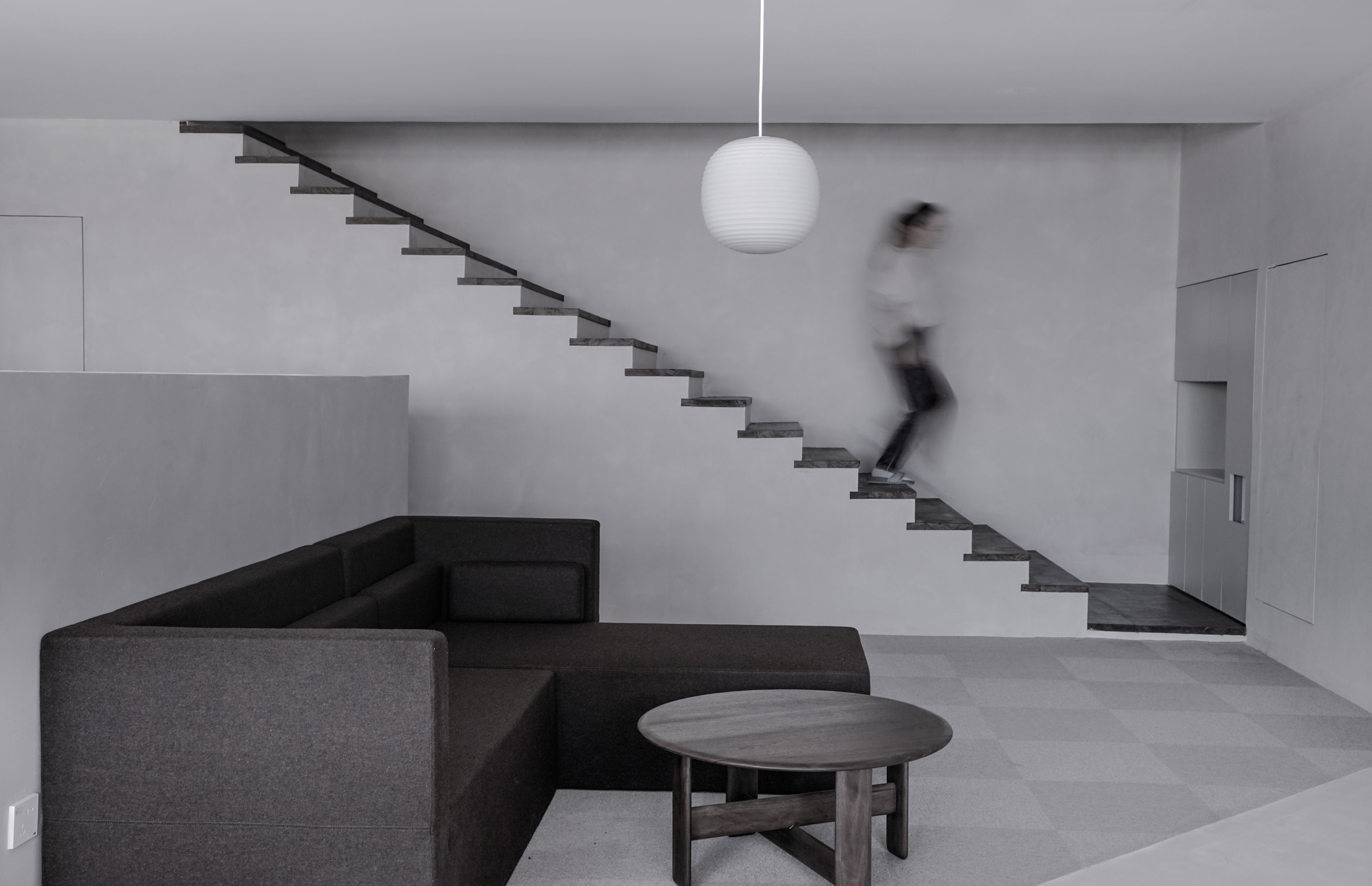 Translucent paper-like blinds hang in front of the windows to lend a soft and hazy light quality to the office interior.

Some dark-coloured elements, like the rough black stone counter that sits towards Fnji office’s entrance, have been incorporated to “strike out the softness”. 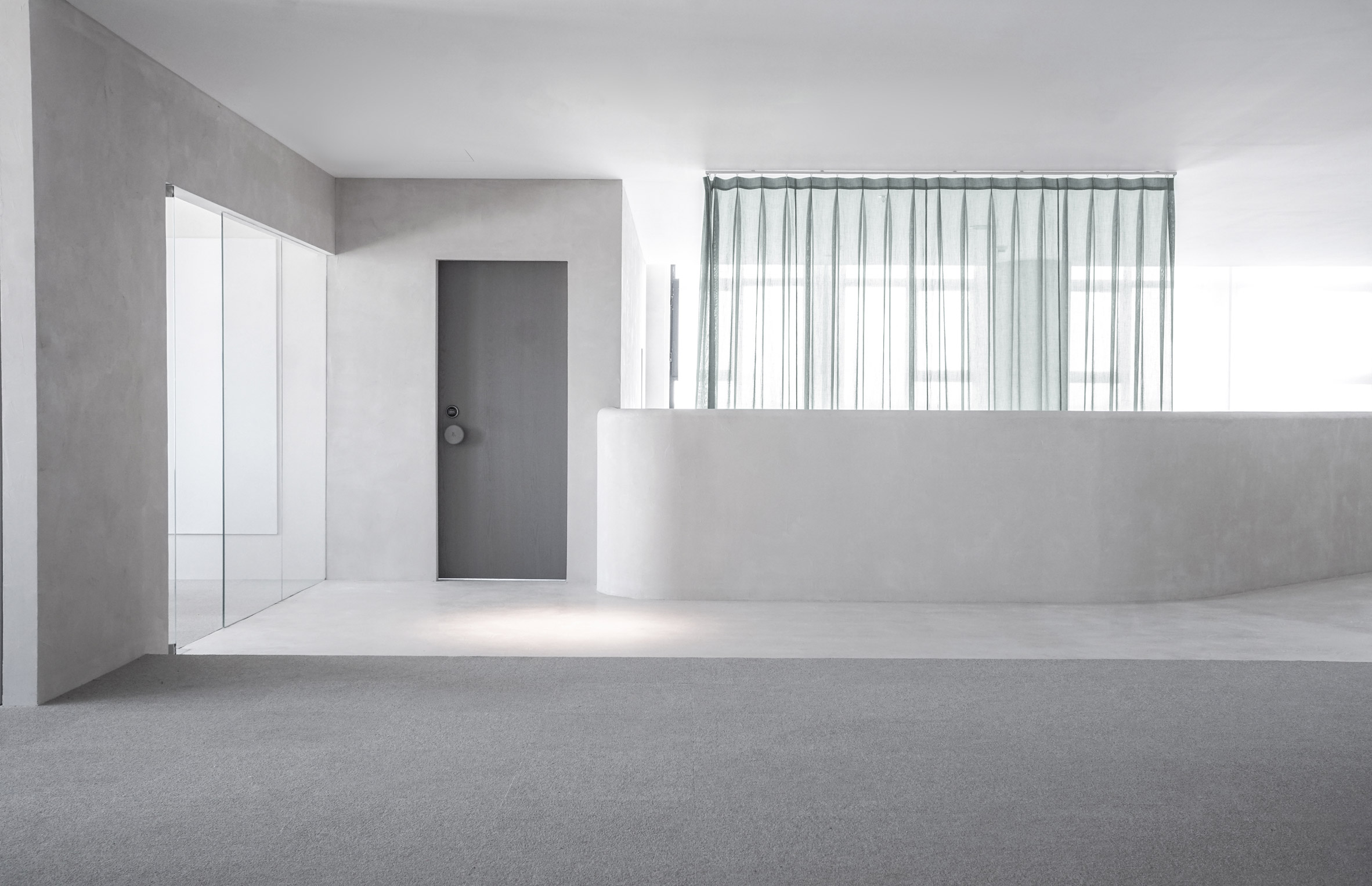 Much like Tra & Xi Studio, architecture practice Precht referenced the film Her for its design of a data office in Chaoyang, Beijing.

The floor, desks and work booths in the office are upholstered in soft grey fabric, which the practice hoped would emulate the way the film “connects technology with a very warm and tactile atmosphere”.

Dezeen also included Her in its roundup of 10 films with striking interior design to watch under lockdown.

Photography is by Mobai except for head image by Yu Ling.