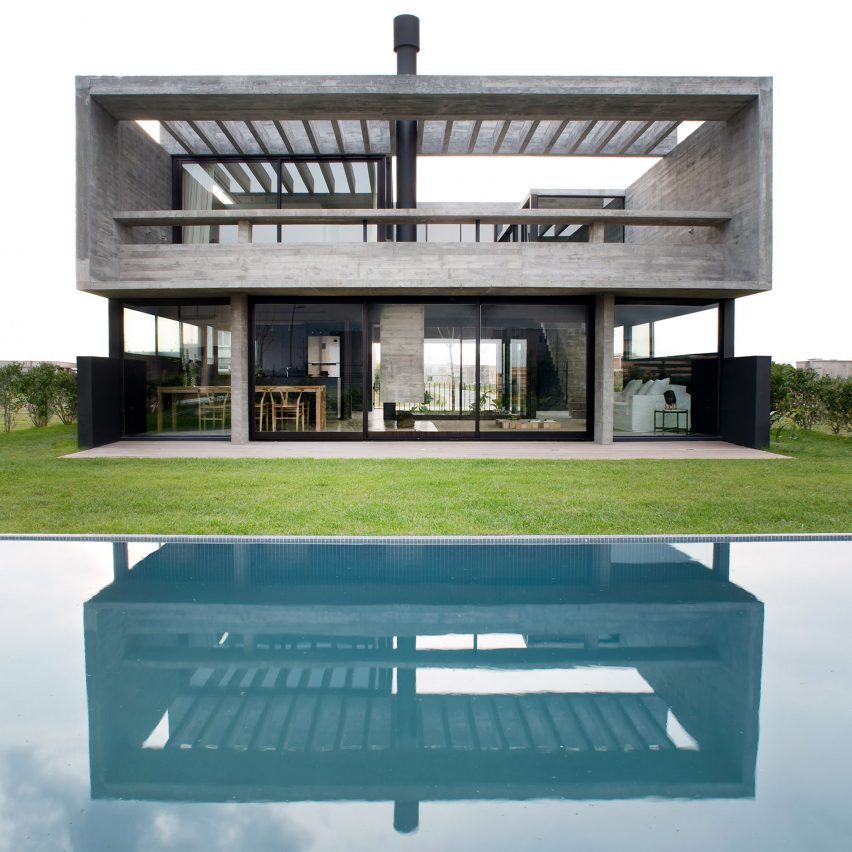 Casa Castaños is Belén’s home and is in a gated residential community about a 45-minute drive from the city centre of Buenos Aires. She designed the house for her and her family with Künzel, and it comprises a two-storey concrete structure with a flat roof and measures 236 square metres. 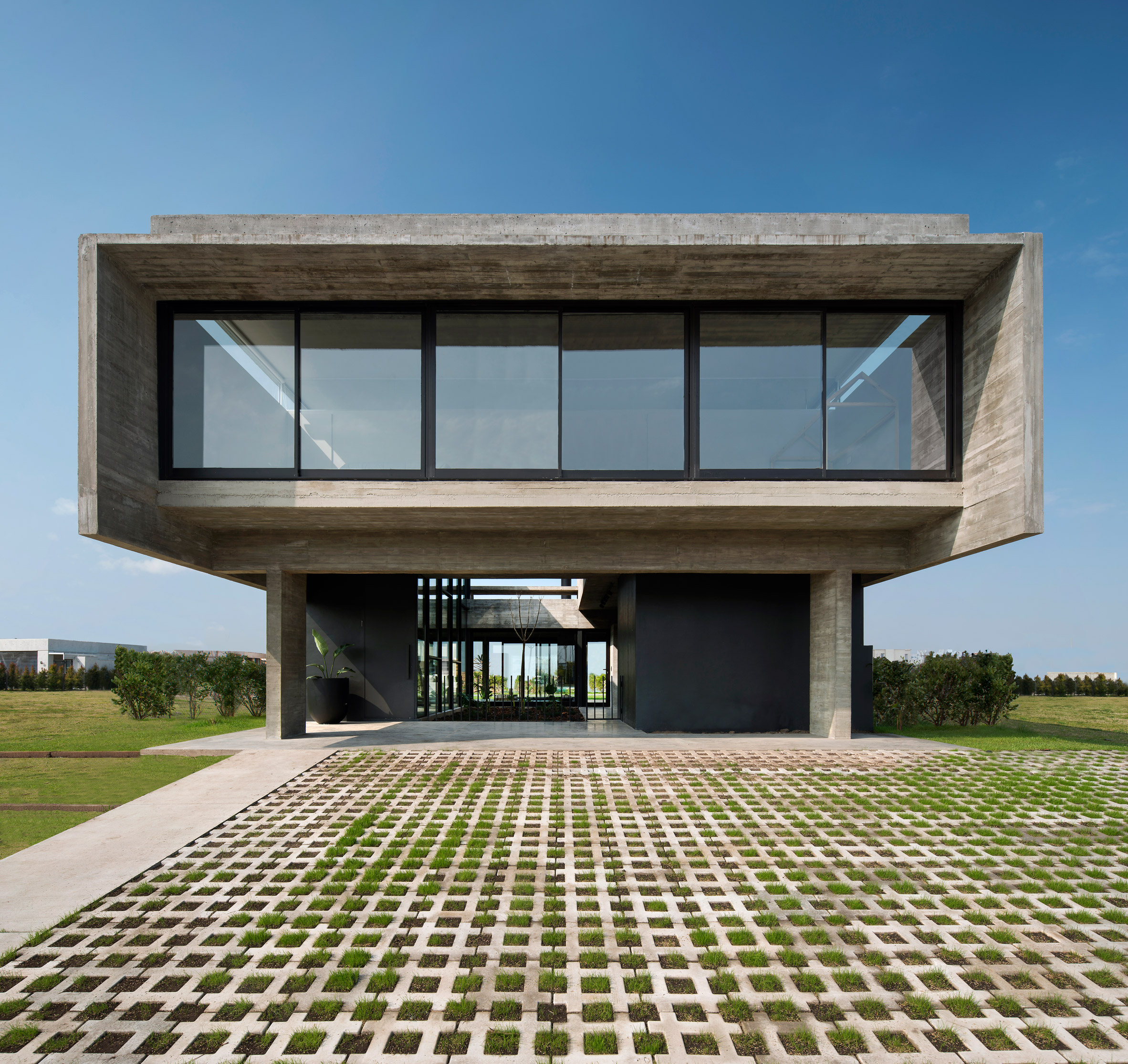 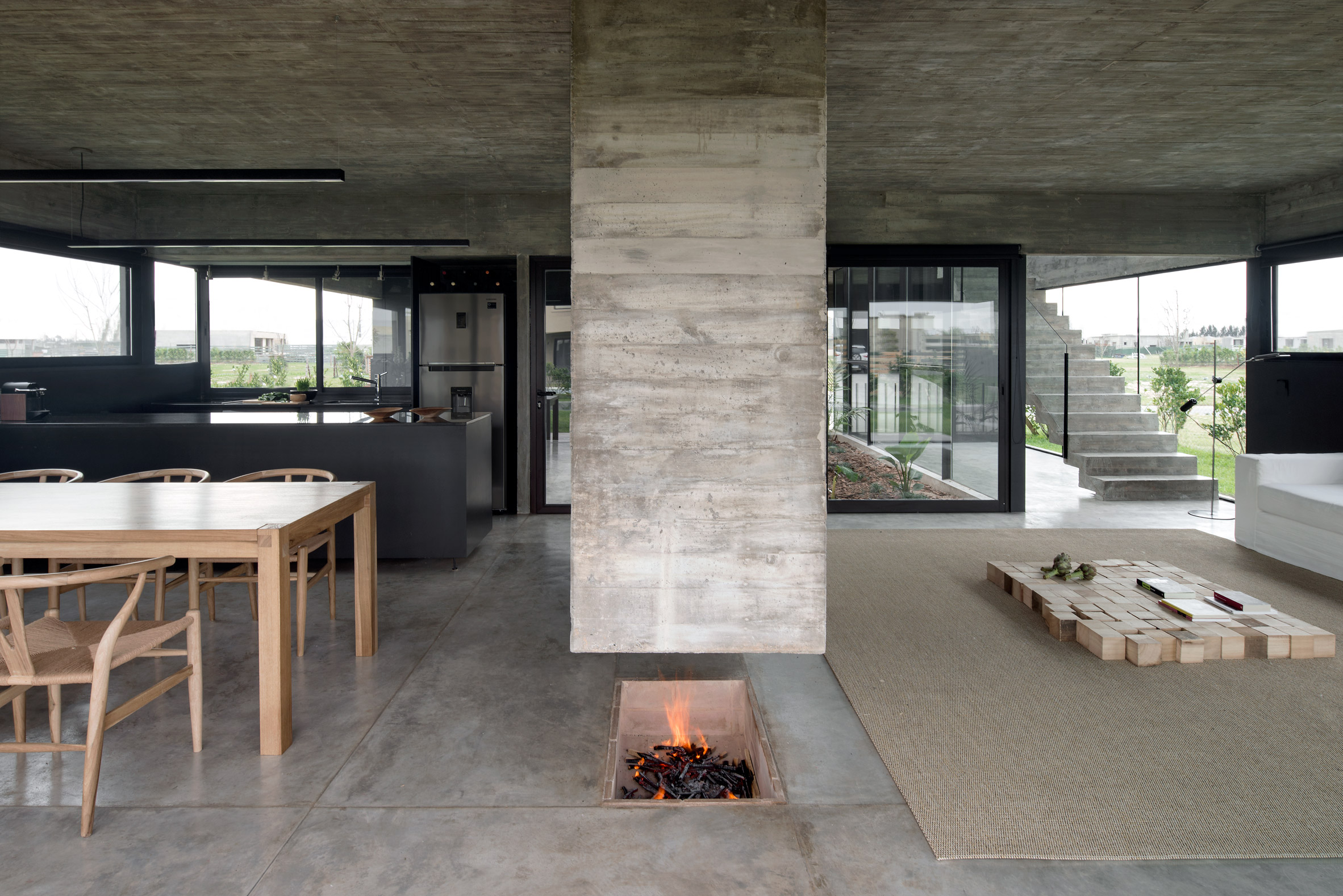 In addition to observing these limitations, the goal was to create a home that did not look like a “bulky and heavy volume,” the duo added. As a result, they used a series of setbacks, outdoor areas and large portions of glass. 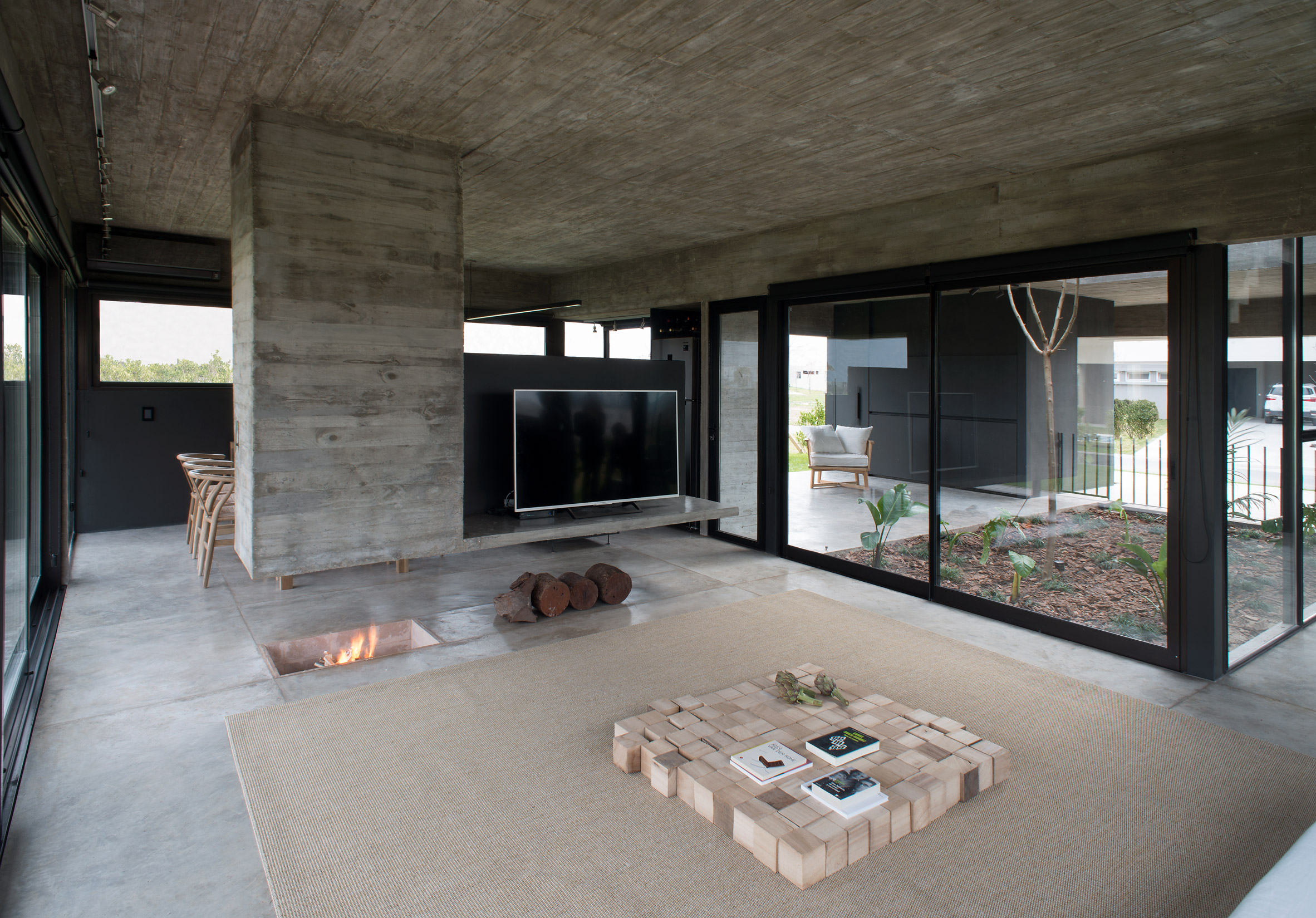 “The project strategy consisted of breaking down the total volume of the house, in a way that none of the facades would express the total height of the building, to avoid showing a robust object,” the architects said.

The concrete upper storey projects from the four walls of the ground level below and is supported with black pillars at four corners. 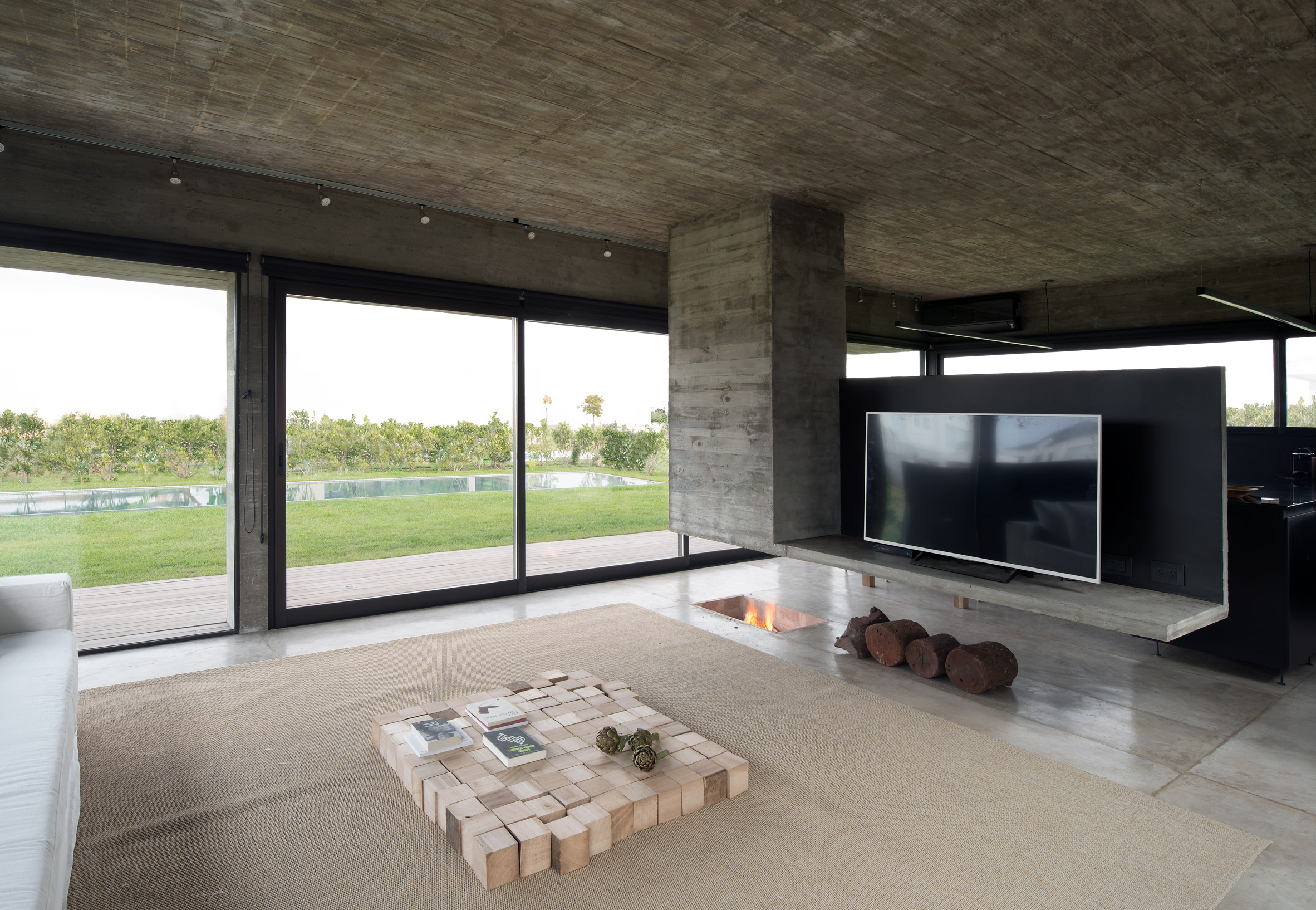 At the front of the house, an overhang forms a covered carport and the driveway has grass growing through its pavers.

By positioning the ground floor behind the carport, it becomes more private and protected – the team describe it as “visually hidden from the front by pulling back the entrance volume”. 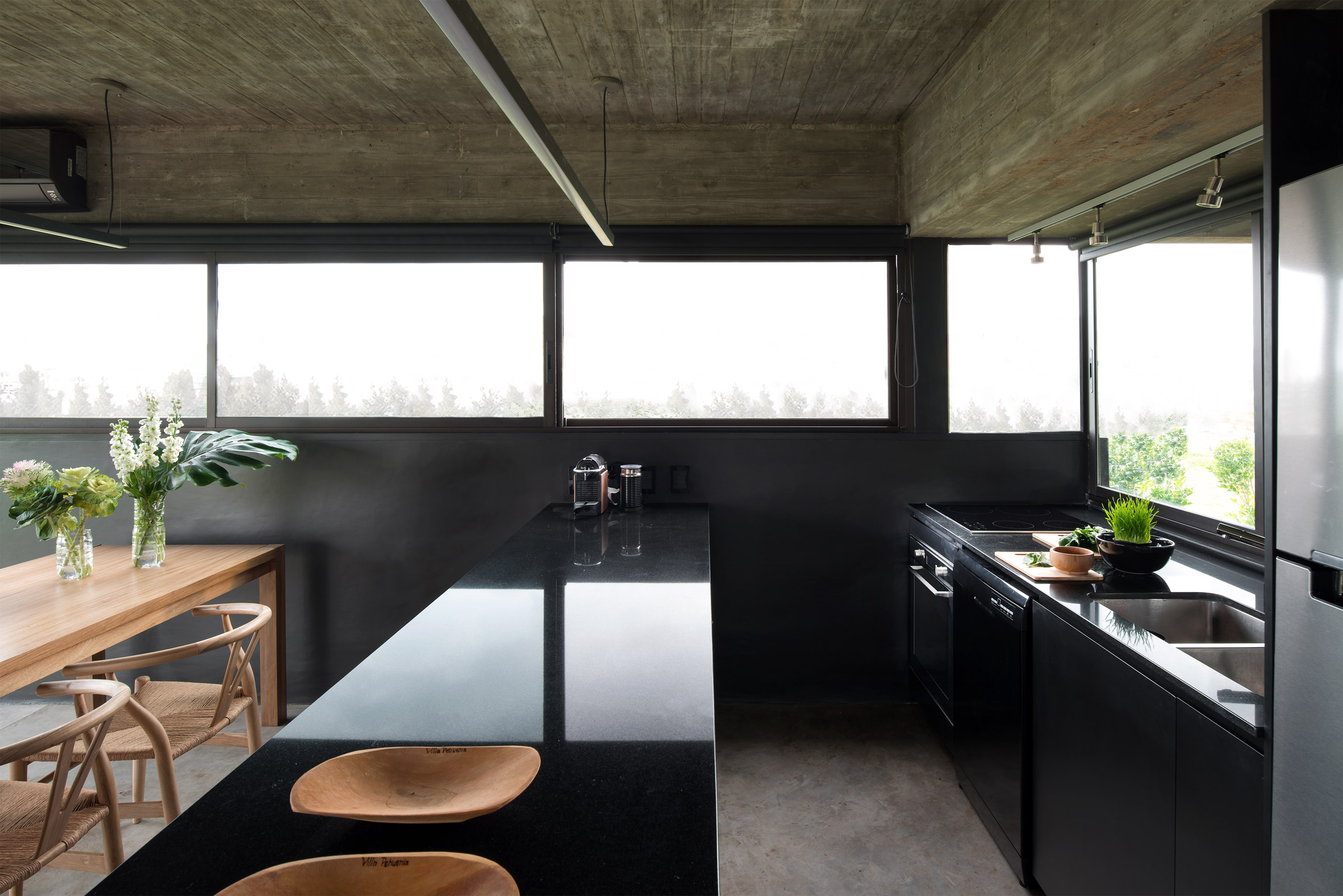 Much of the ground floor features windows, including glass walls that enclose a courtyard with a jacaranda tree.

The architects chose this ample amount of glazing to keep Casa Castaños naturally cool with cross ventilation. The vegetation at the centre of the home in the courtyard also creates a microclimate to help dissipate the heat in the summer months. 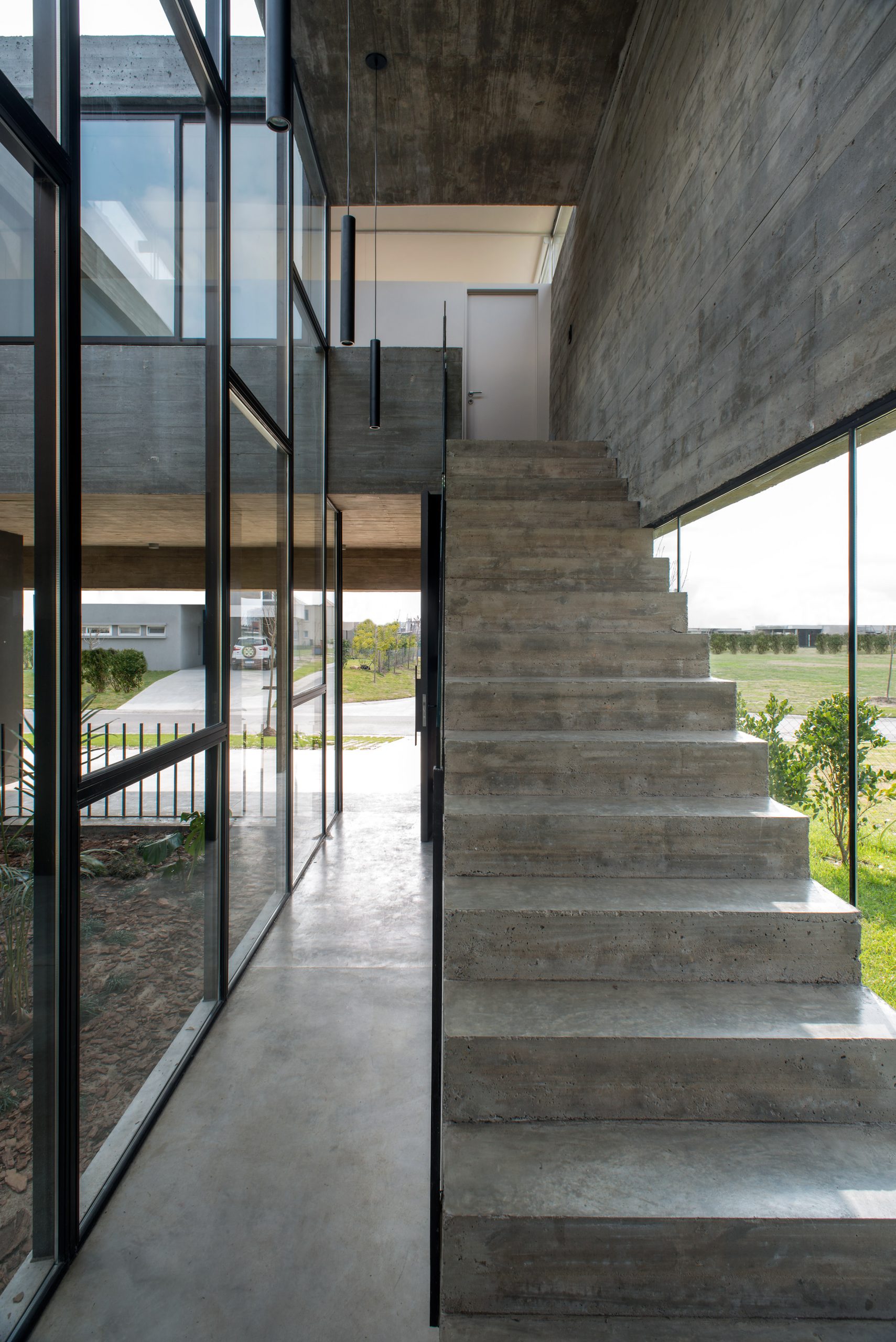 “The shadow of the treetop (when fully grown) will do as an umbrella, protecting the house from solar impact,” the architects said.

“We have selected the jacaranda tree because, besides its beauty, it is a deciduous species which will be in full bloom during summer, acting as a sunshade, but will also allow the sun radiation to pass-through during winter.” 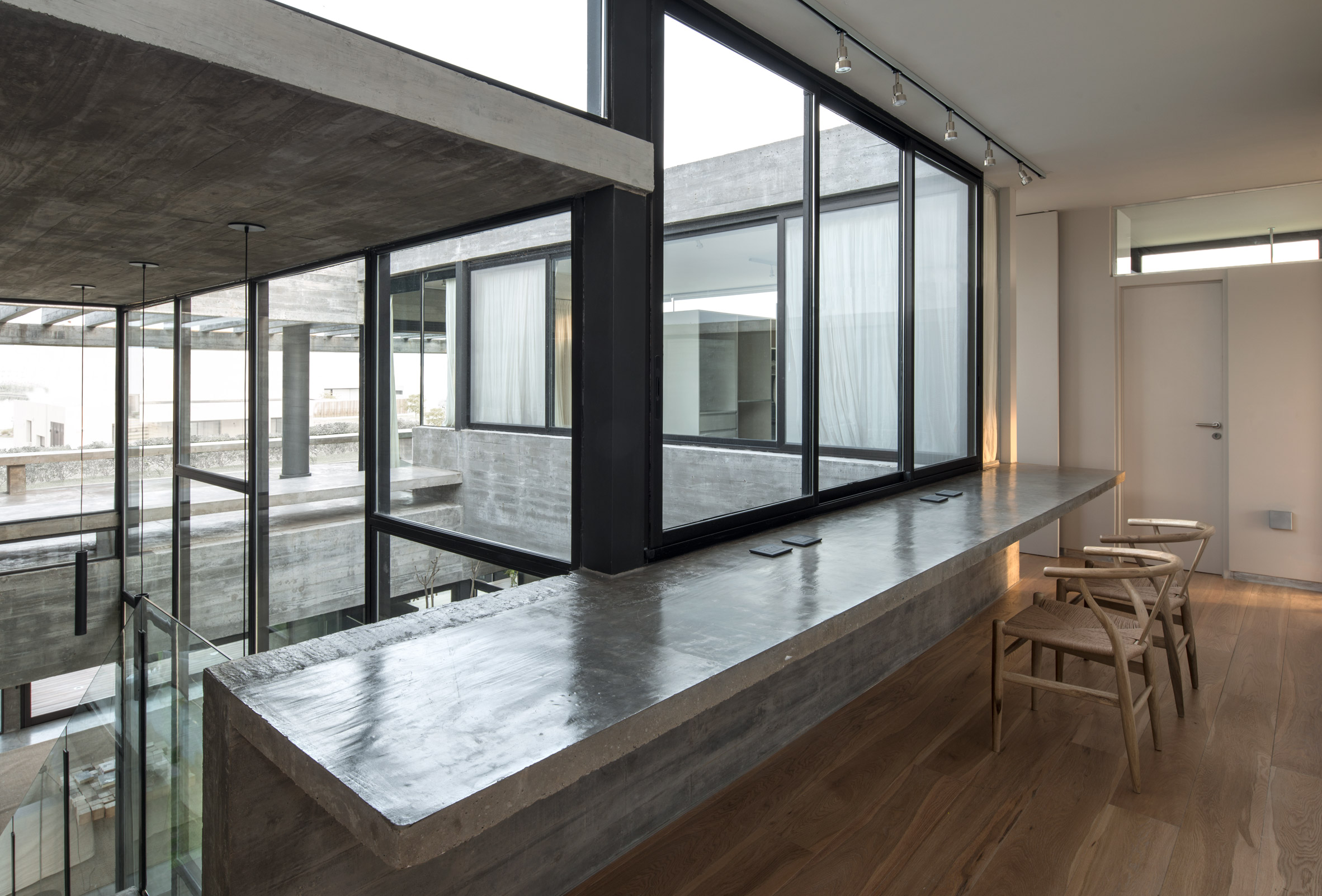 The rear of the ground floor contains an open-plan kitchen, dining room and living area. Glass doors access a patio, garden and outdoor swimming pool. A concrete volume is suspended from the ceiling in between the living room and dining area and houses a fireplace. 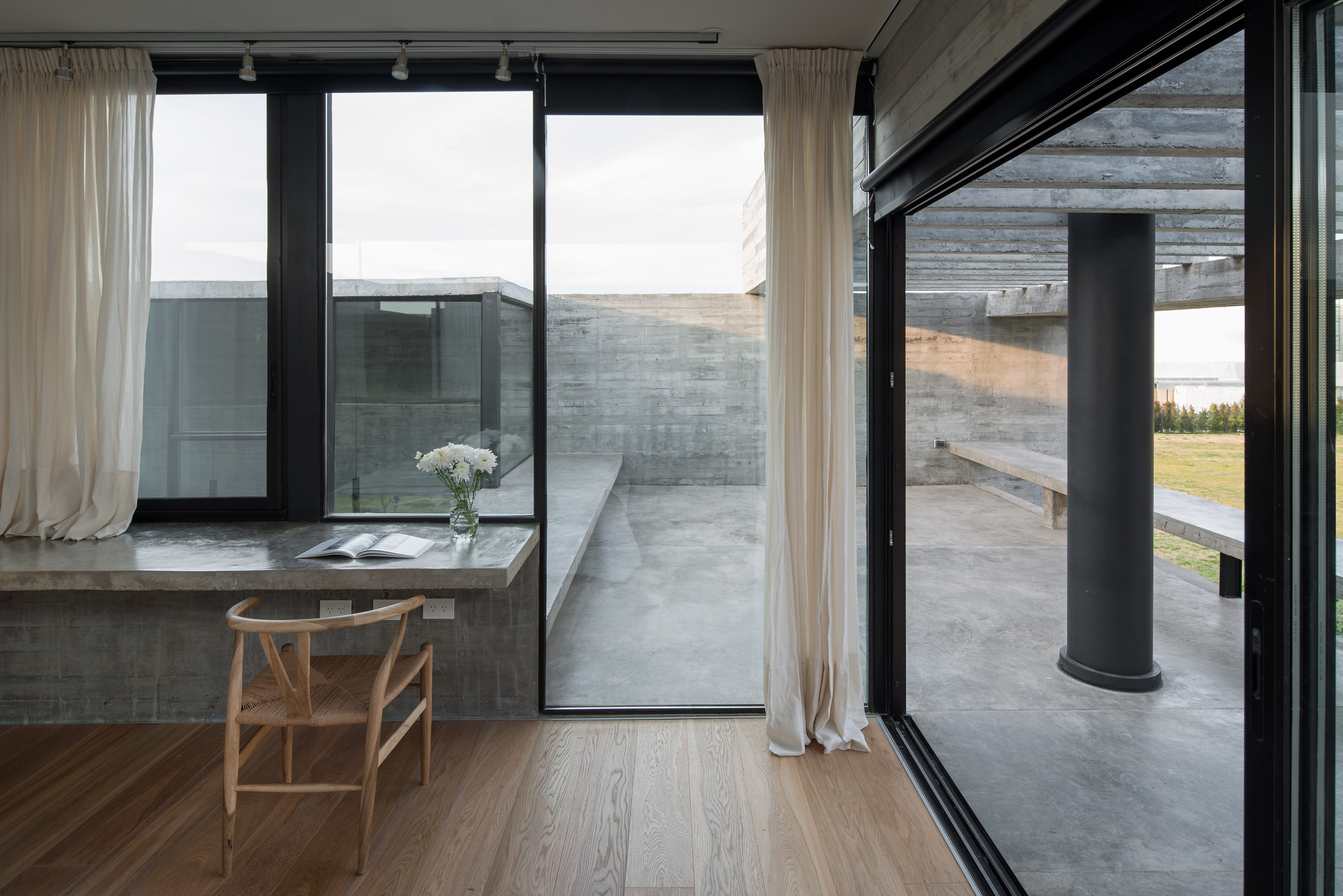 Upstairs contains three bedrooms and two bathrooms, which wrap around a walkway that contains a desk integrated into the walls. The master bedroom has a private terrace with a pergola for shade and overlooks the garden, while the two other bedrooms face towards the front of the house. 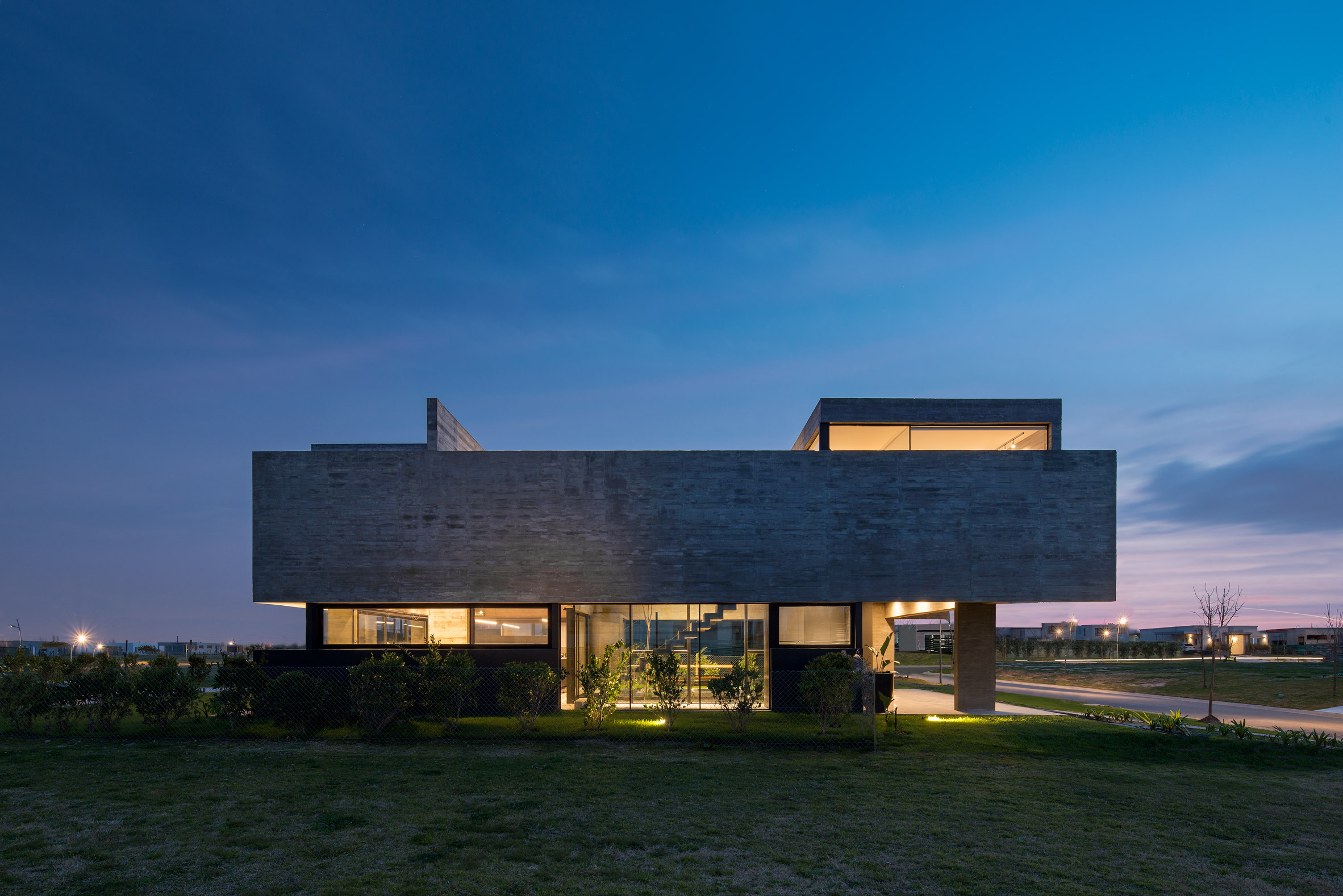 Interiors are pared down with walls painted dark grey, other portions of exposed concrete, concrete floors and furniture in white, cream and wood. Kitchen cabinets and counters are black and relate to the black steel window frames throughout.

The first floor was designed by the architects however to have a “more traditional profile” than the cool, dark interiors of the ground floor and feature plastered walls painted white and pale wood floors. 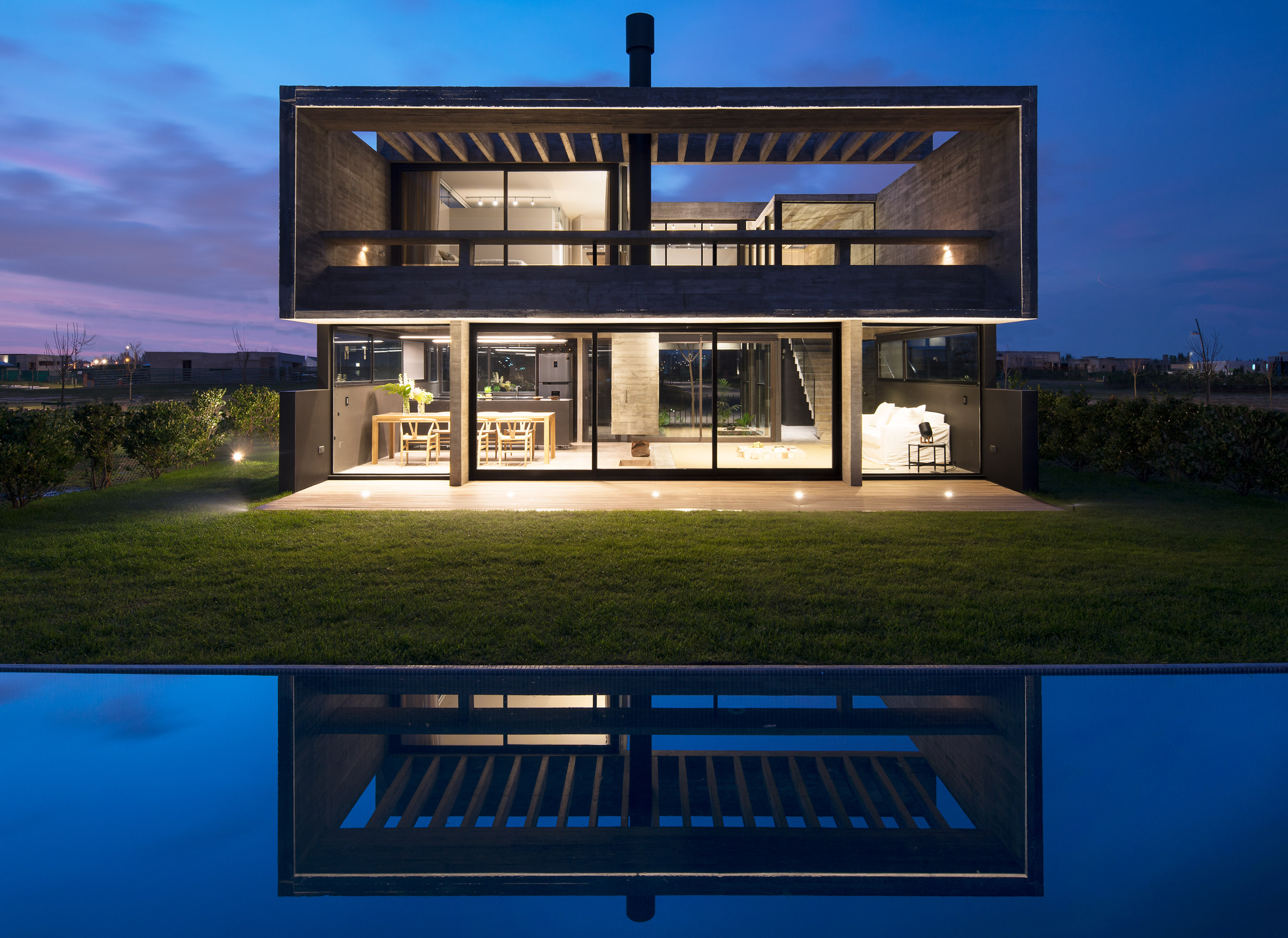 For warmth, concrete floors have radiant heat and the walls in the bedrooms have a layer of glass wool for insulation.

Casa Castaños is in the Nordelta district of Buenos Aires, and other projects nearby are a concrete sailing clubhouse on the Paraná River and Lamas House by Moarqs and Ottolenghi Architects.

Photography is by Daniela Mac Adden.