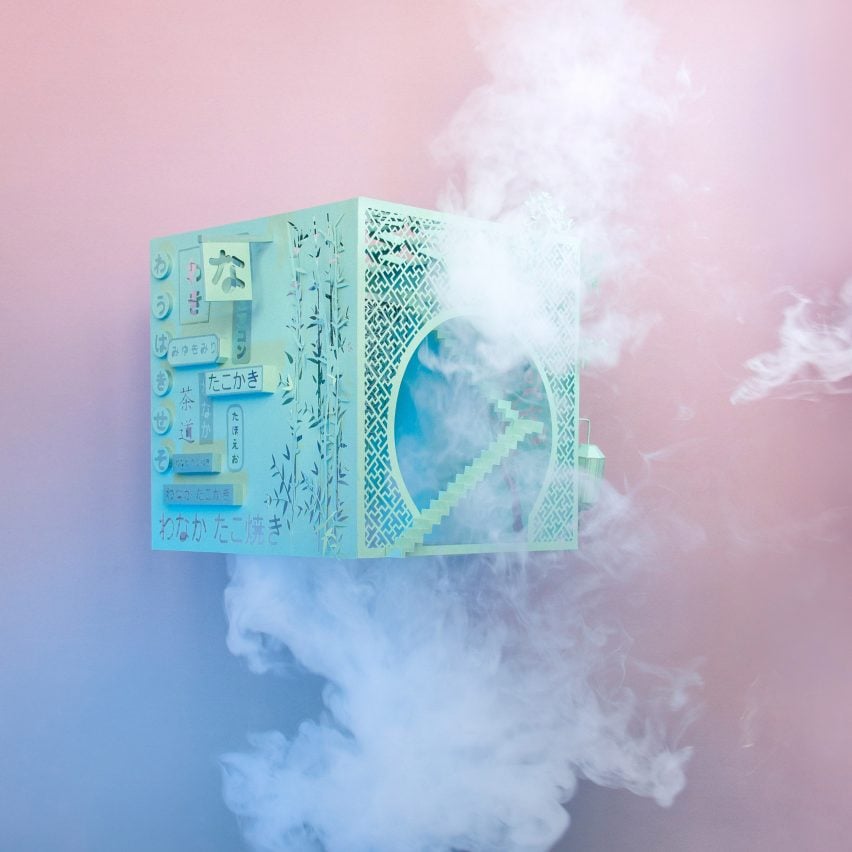 Artists Camille Benoit and Mariana Gella used the coronavirus lockdown to design architectural models of fantastical cities, made from paper and tools they had at home.

The London-based paper artists are flatmates and had brainstormed the 3D project, called Invisible Cities, for a while before the UK lockdown gave them the chance to build it.

Their four paper models, called Saori, Azra, Calista and Ika, were informed by Italo Calvino’s book Invisible Cities, which “explores imagination through the descriptions of Marco Polo travels,” according to the designers.

Benoit and Gella transformed their living room into a workshop to assemble the project. “Most of the days we would wake up with tiny pieces from the project in our beds. We fully lived this paper experience,” they told Dezeen.

Each model represents a different Invisible City. “We initially sketched the four cities on paper before developing the front elevations on Illustrator to get a general idea of how the architecture would look,” the artists explained.

“Using a 3D software, Rhinoceros, we played around with the volumes until we found the right proportions for each city. We also rendered the models to understand and anticipate how light would affect the sculptures.”

Following the renders, Benoit and Gella made 2D pieces that were cut in both a cutting plotter and manually and then assembled into 3D models, some with added metal wires for stability.

“Despite following these steps for the cities, each one presented unique challenges,” the designers explained.

“For example, Azra is smaller than the other and required more patience during the construction phase – the smaller they are, the trickier they are to assemble.”

The cities were made using only materials and tools that could be found in the designers’ flat. “It’s what made this project so challenging and fun at the same time,” they said.

“The whole process, including the research period, design, construction and photoshoot, took two months. We had a good working routine but also took time to enjoy the process, as it was all about learning and experimenting.”

Once the models were finished the designers photographed them, using the smoke from an electronic cigarette to create the ethereal atmosphere.

Both creatives have worked with paper before – Benoit as a paper artist at a commercial studio, and Gella as an architect and artist – and believe the material is underappreciated.

“Paper is a very affordable and versatile material, but it is perhaps underexplored in architecture – it is seen more as a means to an end,” they said.

“Paper allows you to create extremely complex volumes and shapes, leaving more room for conceptual exploration. Its appearance is fragile, but it is structurally (and visually) strong, which turns it into a really exciting material to work with,” they added.

“It is when you remove the restrictions of using materials that simulate reality that you can achieve unexpected results.”

Though the Invisible Cities are imaginary, their design was based on some real buildings, including Ricardo Bofill’s La Muralla Roja, which informed the Calista model and L’Institut du Monde Arabe and Sakura House, which influenced Saora.

Gella says the architectural language was an essential tool, allowing her to express fictional worlds through the use of realistic graphic codes.

It also helps viewers relate to the sculptures, as they can recognise elements from existing cultural heritage, such as Islamic arches and patterns.

“We wanted to create something that would allow the viewer to travel without any sort of restrictions, in a time where we were all locked between four walls,” the artists said.