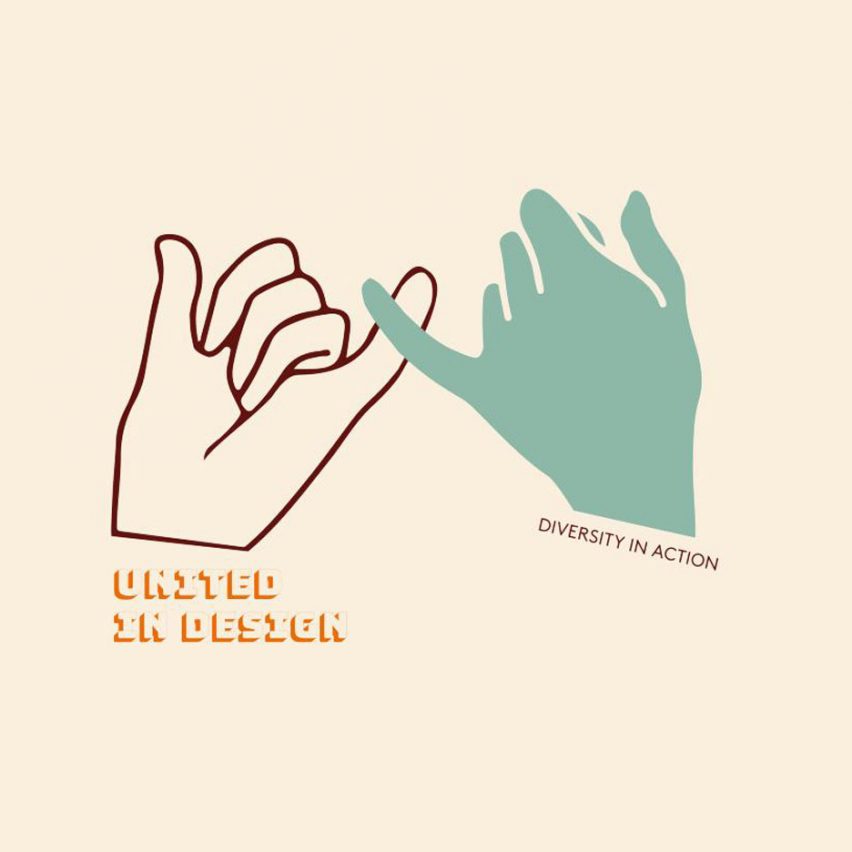 Interior designers Sophie Ashby and Alexandria Dauley have set up United in Design, an organisation that aims to increase racial diversity within the interiors industry.

The initiative, which is supported by designers Martin Brudnizki and Joyce Wang, as well as Dezeen columnist Michelle Ogundehin, will invite studios to pledge committing a series of actions to make the interior design industry racially inclusive.

“Our goal, together with our esteemed steering committee, is to create a UK wide initiative and provide an actionable road map for design studios, magazines and suppliers to follow,” said Ashby and Dauley.

“We are the definition of grassroots for now, but we are thinking big and in it for the long-haul,” they continued. “We aim to create equal opportunities to those who may previously have been overlooked, side-lined or worse.”

A steering committee comprised of the founders, Brudnizki, Wang, Ogundehin, and a roster of others such as Graeme Brooker, who is head of design at the RCA and Emily Senior, who is digital editor at House & Garden magazine, will determine United in Design’s direction.

United in Design members will commit to supporting the BAME community

The organisation aims to support the BAME community in two ways – the first is the creation of a resource hub-cum-online journal, which will provide guidance on how to get a career in interior design and share employment and training opportunities.

This resource will be overseen by Simon Hamilton, an interior design career coach and former international director of the British Institute of Interior Design (BIID).

United in Design will also ask interior design professionals to commit to its seven-point action pledge.

Five of the actions focus on commitments to the BAME community: school outreach, career insight days and work experience, mentoring, apprenticeships, and talks with art schools, design colleges and universities.

The other two actions – diversity training and promoting the work of BAME designers through press and PR – are commitments that professionals will carry out within their own businesses.

Those that are able to commit themselves to at least three of the seven pledges will become “a member of the United in Design movement”.

Members will also have to pay an annual subscription fee to the United in Design charity which will go towards funding initiatives and widening their outreach.

The launch of United in Design comes in light of the murder of George Floyd and wave of anti-racism protests across the globe.

In the days following Floyd’s death – when several creatives were sharing black squares on Instagram to show solidarity with racial equality – Ashby issued a statement that called out “uncomfortable home truths” about the exclusionary nature of the interiors industry. She also addressed her own “blatant failure” of running a diverse design company.

“The outpouring of energy and sheer drive for change I received in response to this post was the fuel I needed to take it one step further and start to provide actionable avenues for change,” Ashby told Dezeen.

“My passion for United in Design was ultimately powered by first-hand experience of this reality,” added Dauley, who noted the lack of BAME people when she both studied and tutored at the KLC School of Design. “I began outreach to leading industry figures to specifically promote the benefits of addressing inequality.”

Others in the interiors and wider designer industry are trying to tackle and talk about the issue of inclusivity. Last month, in an opinion column for Dezeen, Michelle Ogundehin shared her personal experiences with racism and said that more open discussions about diversity need to be provoked.

Interior designer Rukmini Patel and writer Kate Watson-Smyth, who runs interiors blog Made About the House, have recently collaborated to launch the Design for Diversity campaign.

It asks brands, influencers and publications to post a sticker to their website or social media channels – by using the sticker, they pledge to consider the visibility, opportunity and accessibility of different races, genders and sexualities.

Visual designer Mitzi Okou and interaction designer Garret Albury also teamed up to organise Where are the Black Designers?, an online conference that looked into the underrepresentation of black talent in the design and education industries.

The post United in Design aims to provide a “road map” to make the interiors industry more diverse appeared first on Dezeen.