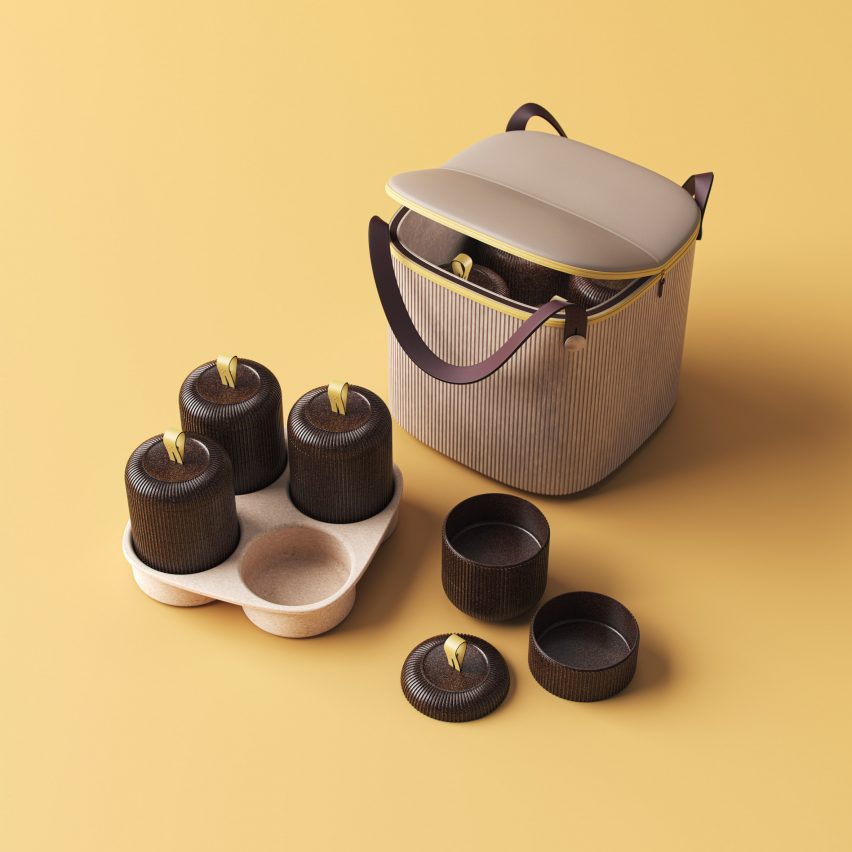 Zero is a concept for an incentive-based food-delivery system by PriestmanGoode that could encourage consumers to use and return bioplastic containers to takeaway restaurants.

To discourage the use of single-use plastic for fast food boxes and bags, Zero would encourage consumers to change throwaway habits by offering an attractive alternative that could be reused again and again.

If produced for widespread use, the containers and bag would be made from sustainable materials such as cocoa bean shells, mycelium and pineapple husk.

Zero’s boxes would have a bento-style stacking system, ridding of the need for individual lids by placing each container on top of the other, with the base of one acting as the lid for another.

PriestmanGoode’s design would work on a customer-rewards basis, where buyers would pay a small fee for the packaging when ordering the food, which would be reimbursed on their next delivery when the containers are returned to the delivery service provider.

Designed to be transferable between restaurants, the packaging would then be washed by the next food provider before being used again.

The firm wanted to redesign food delivery in a bid to lessen the environmental impact of so-called “convenience culture”.

This involved repositioning takeaway packaging as a desirable object that consumers would want to buy.

According to a 2019 report published by Azoth Analytics, the online food delivery and takeaway market is worth around £42.6 billion ($53.5 billion) per year globally.

This figure is now expected to be higher as a result of the Covid-19 pandemic, due to restaurants signing up to delivery platforms like Deliveroo and UberEats since lockdown measures were enforced.

The studio started the project before the global coronavirus outbreak, but it has only become more relevant as restaurants turn to takeaway to serve customers in a socially distanced way.

“[Redesigning food delivery] has become even more important now, as there has been a rise in at-home dining,” said associate director of strategy at PriestmanGoode Jo Rowan.

“It presents an opportunity for design to create something that can contribute to a sense of occasion, that is beautiful, practical and sustainable,” she added. “As a society, we have to move away from a culture of disposables, and focus on principles of the circular economy.”

The circular economy is where materials are kept in circulation instead of being extracted, used and thrown away.

PriestmanGoode researched various food-safe materials that could replace the plastic containers currently used for takeaway meals and deliveries and tested them for qualities such as heat-proof, lightweight, recyclability and insulation.

The team collaborated with a series of designers to work with more sustainable materials, including Paula Nerlich, who developed a bioplastic made from by-products of the cacao industry to make up the body of the containers.

The material is partly made from cocoa bean shells, which is a by-product of industrial chocolate production, separated from the bean during the roasting process.

Design studio Ty Syml envisioned using mycelium for insulation in the takeaway delivery bag, while Piñatex – a leather alternative made from cellulose fibres extracted from pineapple leaves – would be used for the bag lid.

A plant-based neoprene-type rubber called Lexcell, developed by Yulex, would be used for the food container and bag handles.

The bag’s outer would be comprised of the biodegradable Nuatan material by Crafting Plastics, made from corn-starch, sugar and waste cooking oil, which can withstand high temperatures.

Designer Margarita Talep has also been selected to work with the company to create algae-based materials that would replace the clingfilm currently used to prevent spillages.

The bento box-style design of multiple sections included in one vessel, as opposed to individual containers, also halves the amount of packaging needed by removing lids.

“We know that adding value has an impact on behaviour,” said Rowan. “In the UK, plastic bag consumption in supermarkets went down 90 per cent since the introduction of the 5p – and subsequently 10p – tax in 2015.”

“Provided with the right incentives, we know that consumers are willing and able to quickly modify their behaviours to more sustainable patterns,” she continued.

“Introducing a reward-based system, whereby consumers would be given incentives, such as discounts, for returning takeaway packaging into the system, we know would have a positive impact.”

The concept was designed as part of Wallpaper* magazine‘s Re-Made project and will be displayed at Salone del Mobile in 2021 as part of an exhibition dedicated to the publication’s project.

Best known for its transport design, PriestmanGoode recently released a concept for a high-performance balloon and pressurised capsule that would take space tourists on a journey to the stratosphere.

It also redesigned its Island Bay train seating to make it easier for London commuters to social distance in the wake of the coronavirus pandemic.