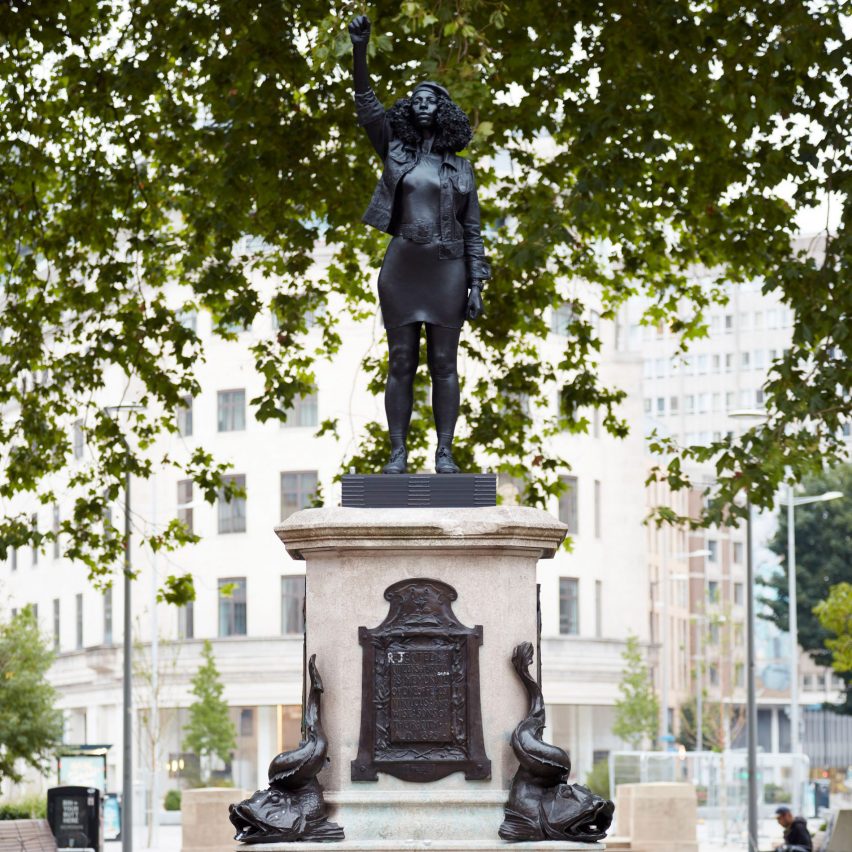 Artist Marc Quinn has erected a sculpture of Black Lives Matter protester Jen Reid on the plinth in Bristol where the statue of a slave trader stood before it was torn down.

Quinn and his team installed the resin and steel statue, called A Surge of Power, during the night. He did not seek permission beforehand from the city authorities, stating “it’s time for direct action now”.

The plinth had been empty since protesters pulled down the statue of Edward Colston and threw it in Bristol’s harbour on 7 June 2020.

British artist Quinn modelled the sculpture for the guerilla plinth takeover on black activist from Bristol Jen Reid, who was photographed standing on the empty plinth making a black power salute in the aftermath of Colston’s toppling.

“It happened in the middle of the news and the worldwide ripple effect from George Floyd’s killing – all of which I had been following.”

Quinn decided he wanted to immortalise Reid when he was shown a picture her raising her fist, a symbol associated with the black struggle for civil rights since the 1960s.

“My first, instant thought was how incredible it would be to make a sculpture of her, in that instant,” he said. “It is such a powerful image, of a moment I felt had to be materialised, forever.”

“I wanted to give power to Black people like me”

Quinn contacted Reid via social media and the pair decided to collaborate on the artwork. Reid said she decided to climb up to where the 17th-century slaver had stood on her way home from the protest on an impulse.

“When I was stood there on the plinth, and raised my arm in a Black Power salute, it was totally spontaneous, I didn’t even think about it,” she said.

“It was like an electrical charge of power was running through me. My immediate thoughts were for the enslaved people who died at the hands of Colston and to give them power,” added Reid.

A Surge of Power depicts Reid raising one gloved fist, like African-American athletes Tommie Smith and John Carlos did at the 1968 Olympics.

Quinn captured Reid’s natural afro hair and her outfit of a black jacket and beret, the historic uniform of the Black Panther Party.

The artist has previously installed public artworks with permission, such as his 2005 sculpture Alison Lapper Pregnant on Trafalgar Square’s fourth plinth. With Bristol, he did not make a formal request beforehand.

The artist did not design the sculpture to be a permanent replacement for the statue of Colston.

“Jen and I are not putting this sculpture on the plinth as a permanent solution to what should be there,” said Quinn.

“It’s a spark which we hope will help to bring continued attention to this vital and pressing issue,” he added.

“This sculpture had to happen in the public realm now: this is not a new issue, but it feels like there’s been a global tipping point.”

In response to the statue’s installation Bristol’s mayor, Marvin Rees said that the future of Colston’s plinth “must be decided by the people of Bristol”.

“The sculpture that has been installed today was the work and decision of a London-based artist,” the mayor said in his statement.

“It was not requested and permission was not given for it to be installed.”

Rees is the first person of black African heritage to be elected mayor of a major European city. While some Bristolians are “elated at the statue being pulled down” Rees said proper procedure must be followed in order not to alienate those who “feel that in [Colston’s] removal, they’ve lost a piece of the Bristol they know and therefore themselves”.

Reid has asked that if her statue is sold by the city that the money be donated to charities Cargo Classroom and The Black Curriculum.

Colston was a Bristol politician and merchant heavily involved in the transatlantic slave trade. He was a deputy governor of the Royal African Company, which shipped more slaves from Africa to the Americas than any other company.

A bronze statue of him was erected in 1895 and granted Grade-II listed status in 1977. Campaigners lobbied for years to take down the memorial to Colston over his role in the slave trade.

Activists finally took matters into their own hands at a Black Lives Matter protest over the death of George Floyd at the hands of police in the USA. The statue was pulled down, rolled down to the harbour and tipped into the water.

Bristol council later retrieved the statue, and one man has been arrested on suspicion of criminal damage.

Graffiti artist Banksy has since suggested that the statue should be used to recreate the moment it was toppled, with statues of protestors pulling it down to please “both those who miss the Colston statue and those who don’t”.