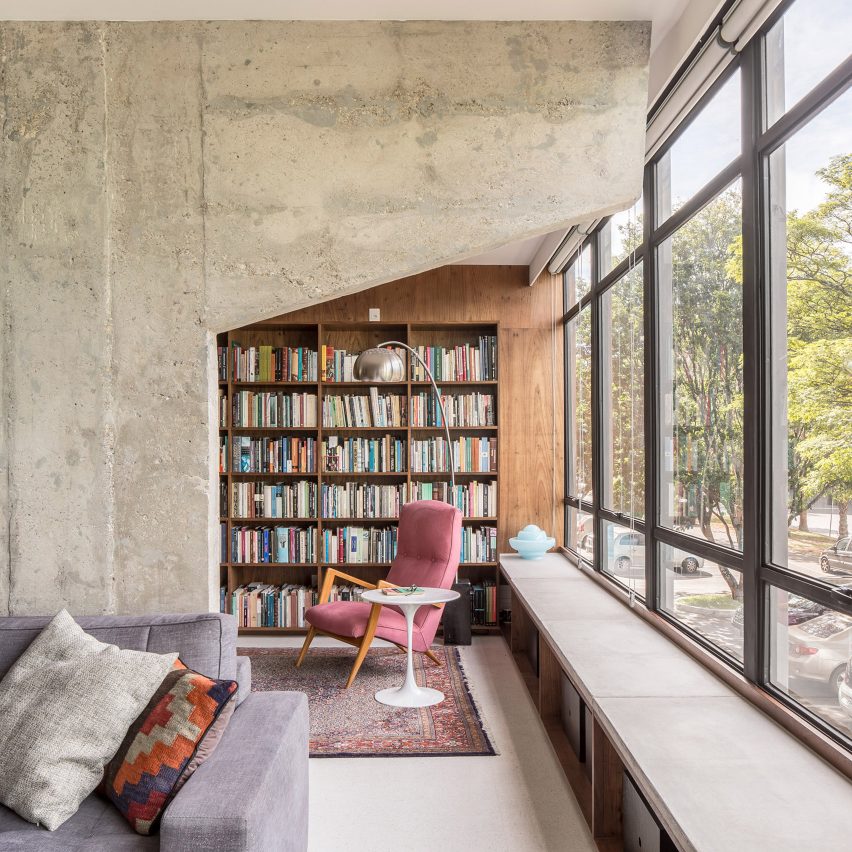 Brazilian studio Debaixo do Bloco Arquitetura has opened up the layout of an apartment in Brasília built in the 1960s to meet a family’s contemporary requirements.

The remodelled apartment is located in residential building 308S in Brasília’s model superquadra, one of the first completed apartment blocks of the urban design scheme conceived by architect Lucio Costa and landscape architect Burle Marx. 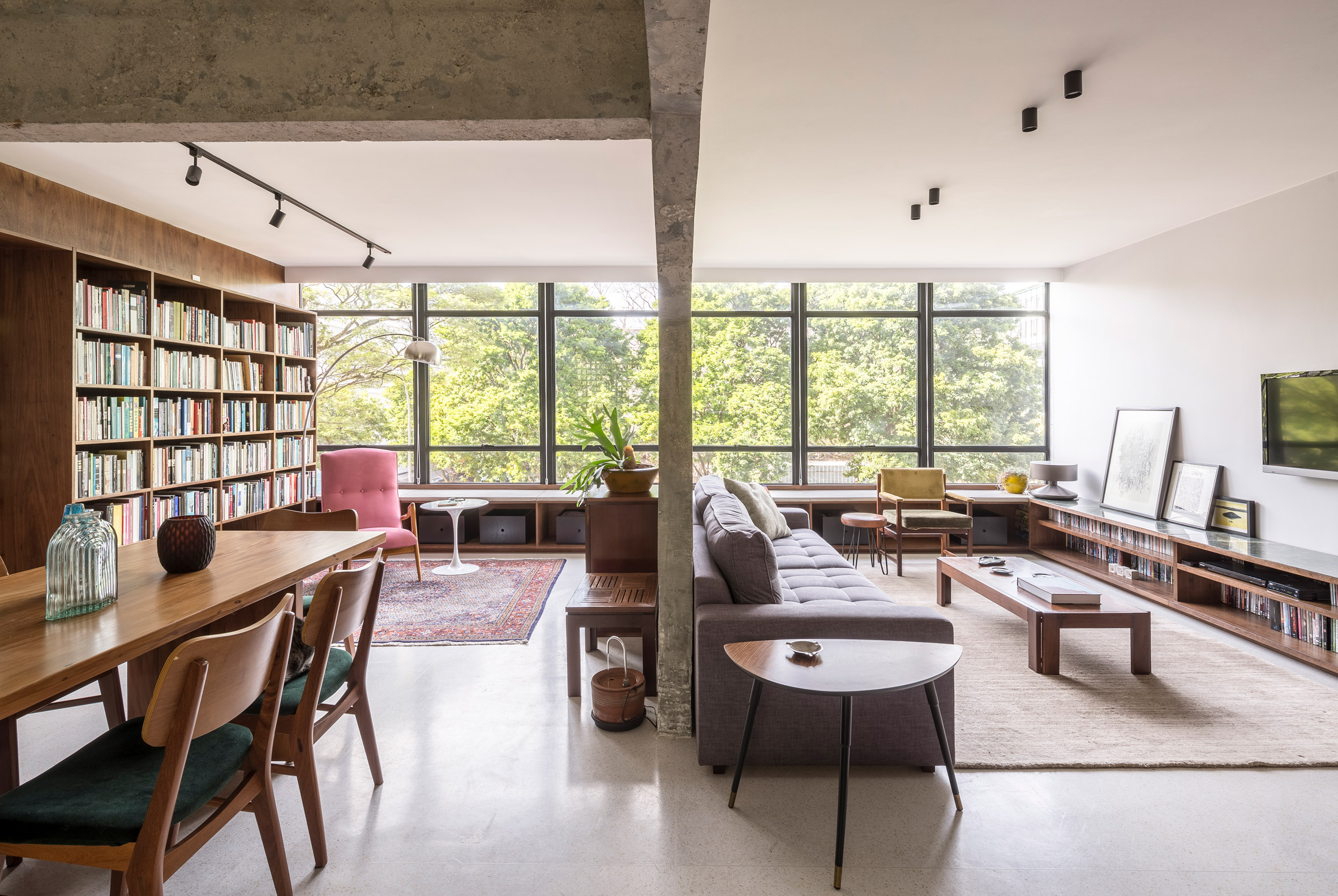 In the updated floor plan the exposed concrete walls are cut open to form a single, shared space for the family to gather. 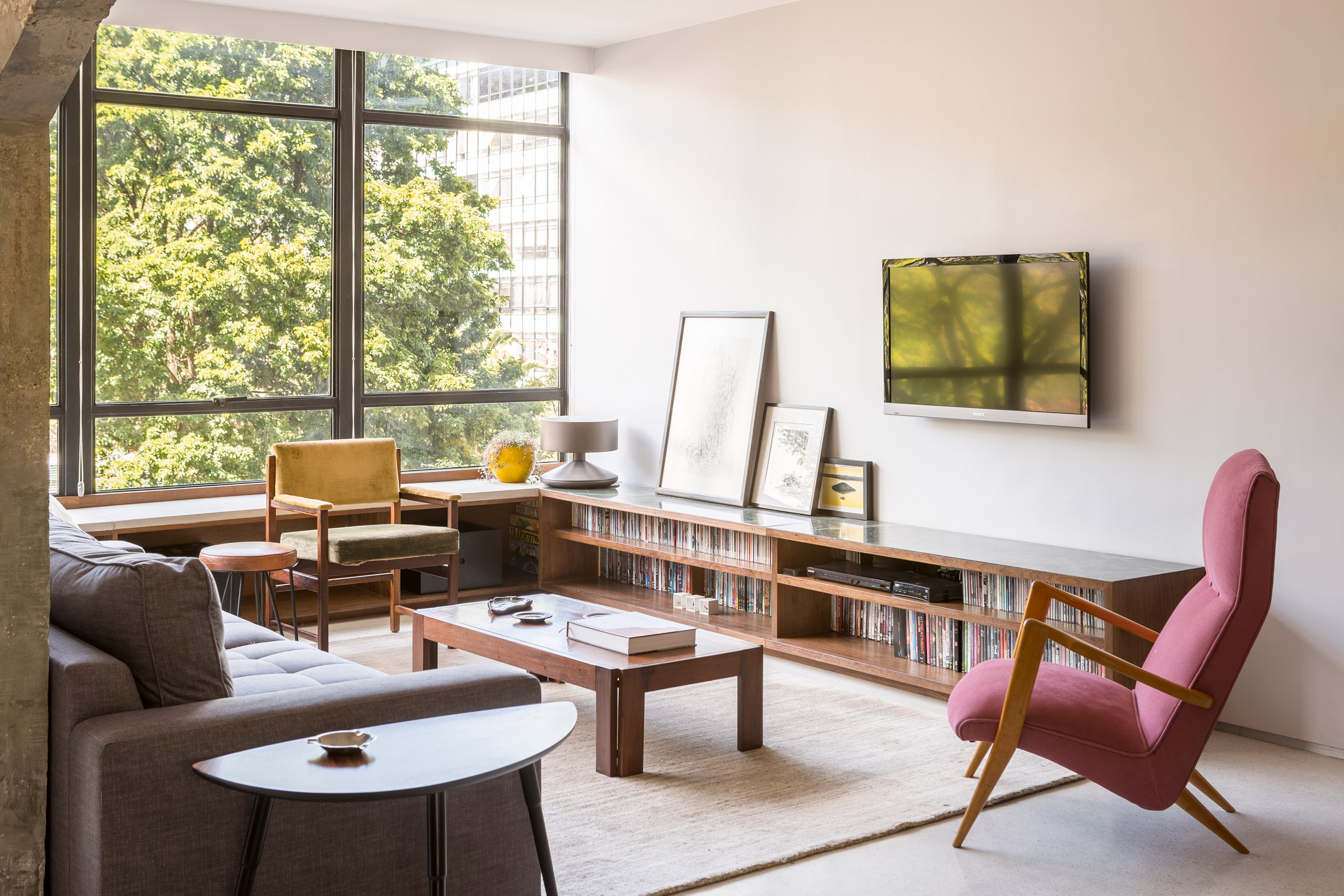 The studio was careful to preserve modernist design elements in the apartment, including its granilite flooring and white cobogo screens.

“The project is summed up in an exaltation of the Brazilian architecture lighting what is most typical in the city’s residences and buildings while joining the modernist and contemporary office technologies and references,” said the studio. 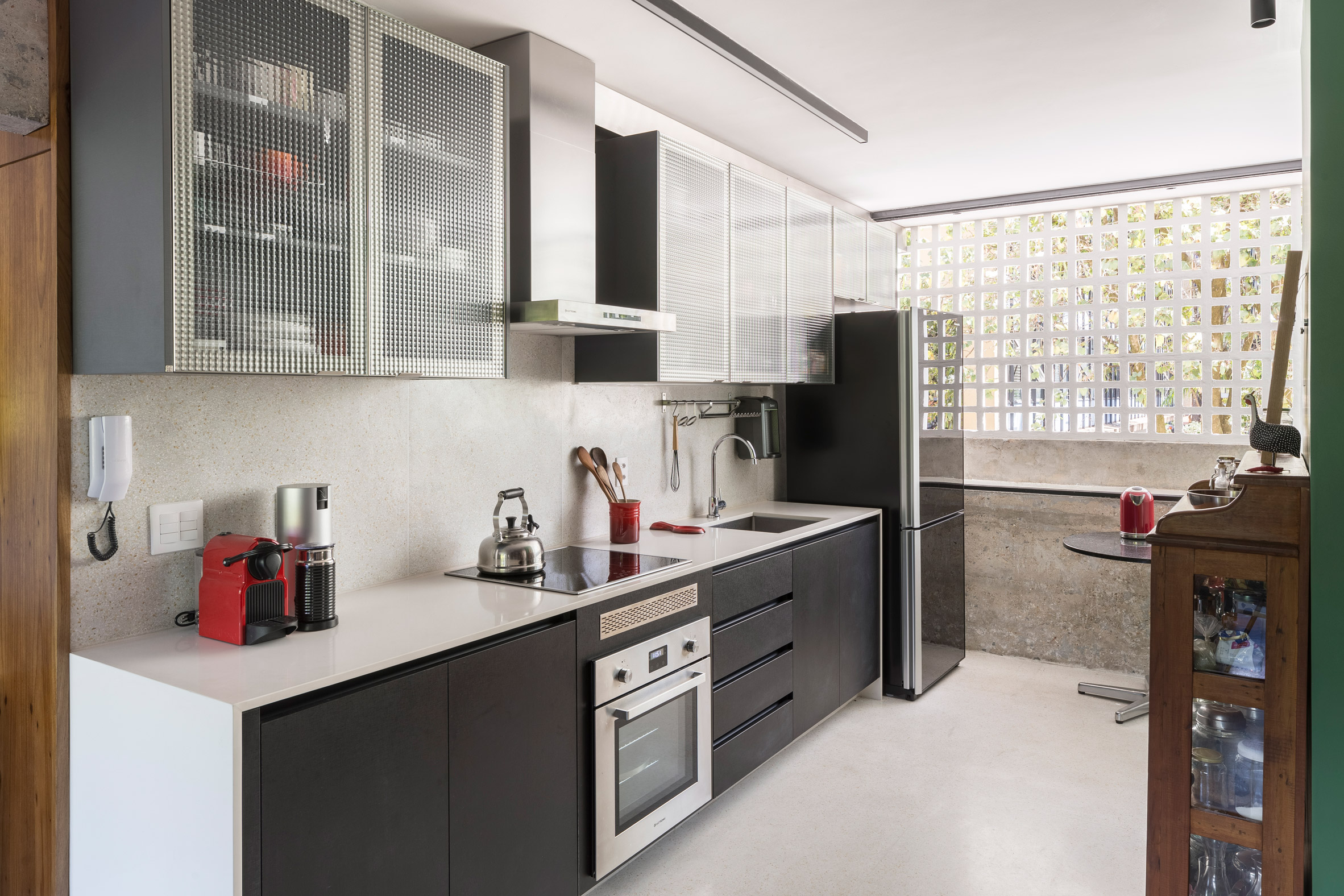 Black cabinetry with corrugated glass doors contrasts with the white countertops in the kitchen. Natural light passes through the square cut-outs on the cobogo wall to brighten the narrow space.

In the living room low-lying wood shelving units wrap around the space forming a bench in front of the large windows and a surface for storing objects along the interior wall. The lounge is furnished with a grey couch and wood tables. 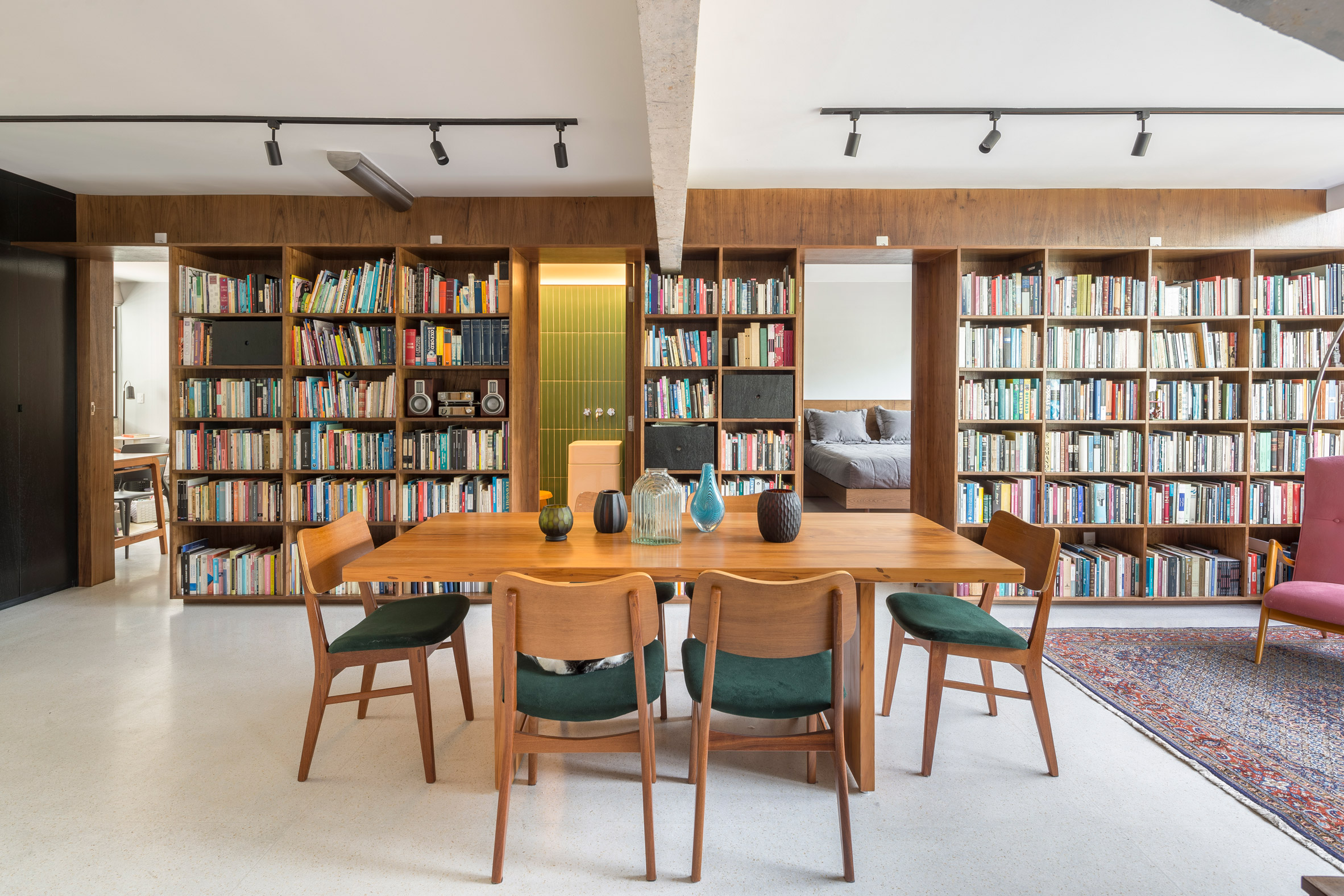 In the dining area and library, a massive wooden bookshelf is stacked with books and audio equipment.

Three doorways that lead to the bedrooms and bathroom are concealed within the unit, which the studio custom-built. 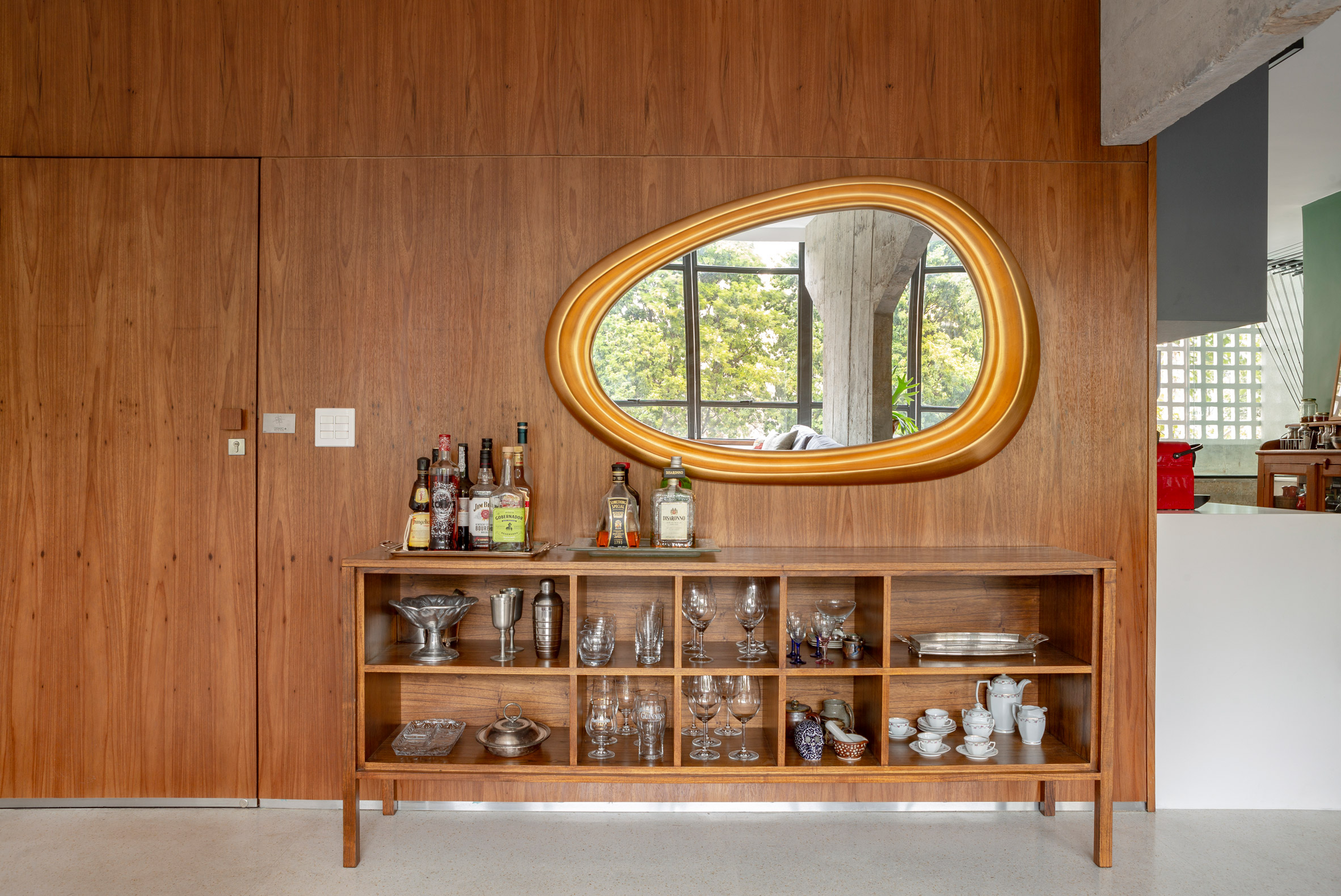 In the master bedroom, the backside of the shelf forms a decorative wall of wood panelling. Opposite the large windows, a row of black doors creates a closet that doubles as a doorway to enter the bathroom situated between the two bedrooms.

Walls in the shared bathroom are clad with vertically-laid green tiles. A large rectangular mirror hangs above the wood vanity, which is topped with two circular sink basins.

The existing cobogo screen and concrete wall from the kitchen continue into the second bedroom. In this bedroom the closet is covered with a series of mirrors that reflect the space’s wood furnishings and the decorative window treatment.

Several of the wood furniture pieces in the apartment are designed by Debaixo do Bloco Arquitetura architect Clay Rodrigues. The studio also cut a hole into the cobogo wall so the client’s cats could access their litter box. 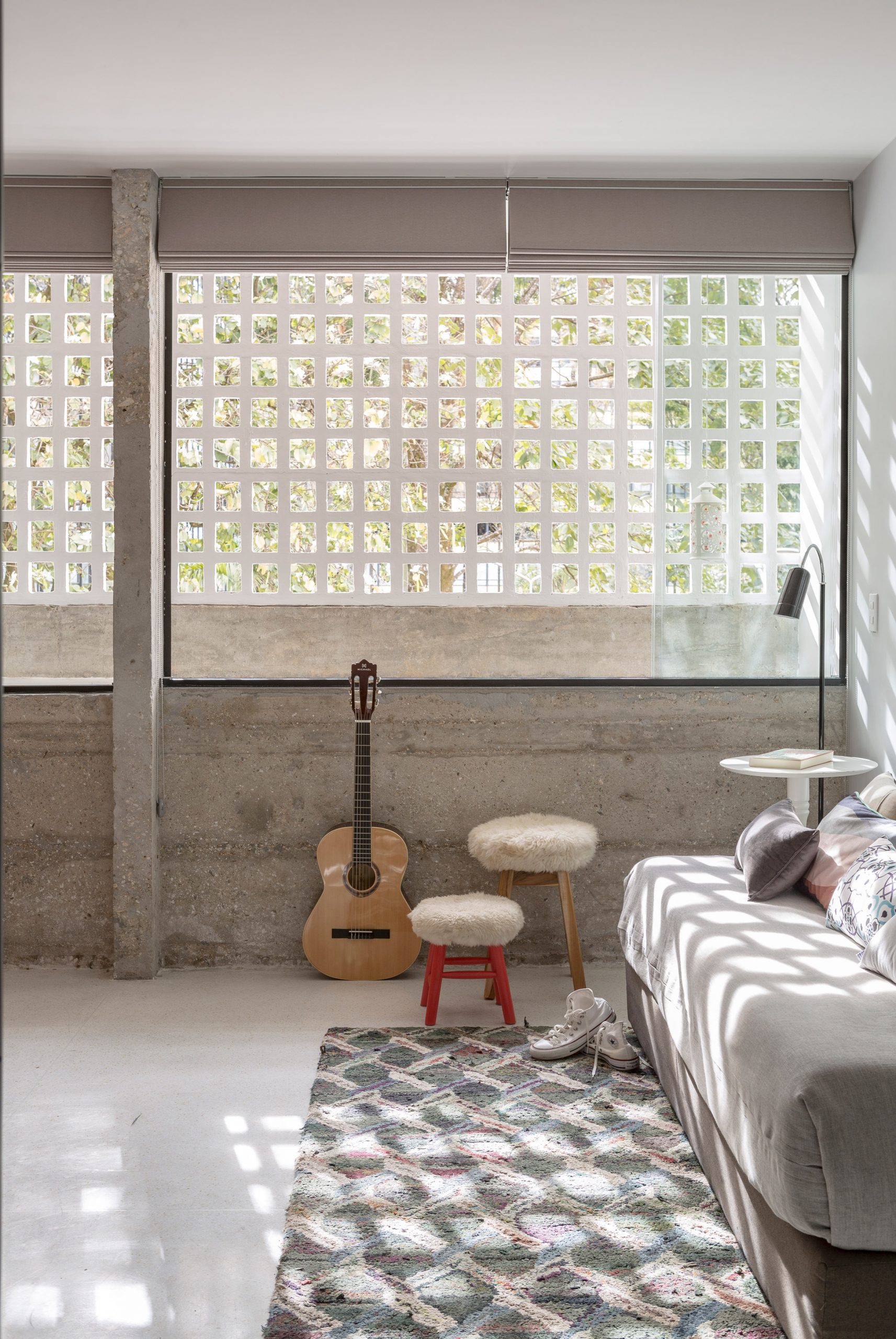 Other projects by Debaixo do Bloco Arquitetura, which translates to English as Under the Block, include an abandoned hospital transformed into a contemporary art gallery.

Photography is by Joana France.