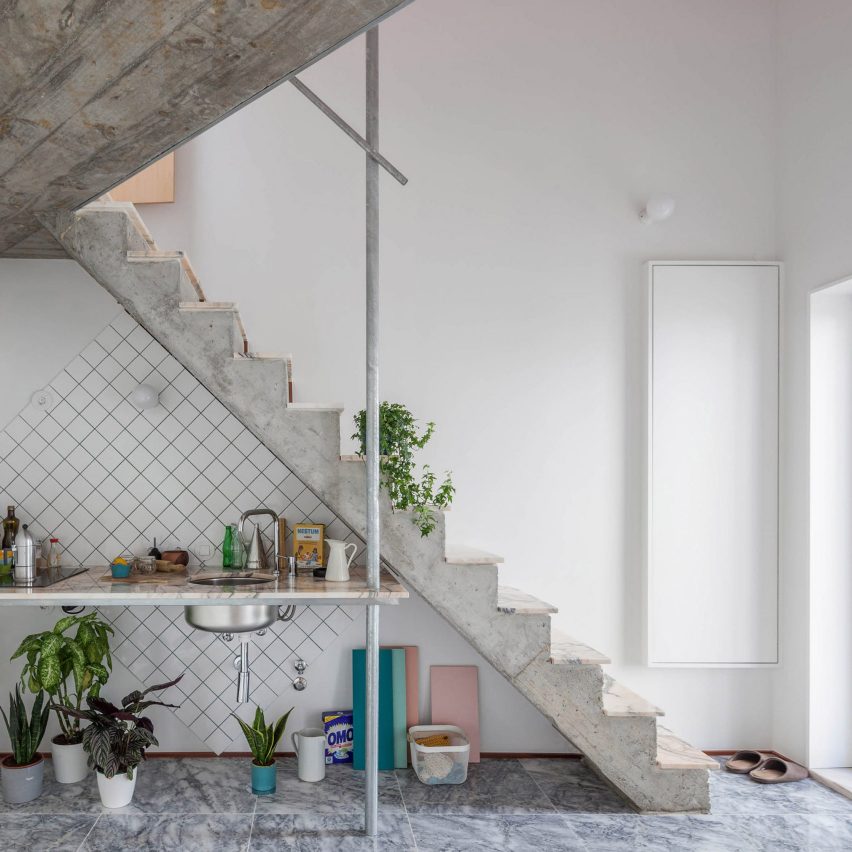 The Portuguese studio renovated a pair of granite buildings to create a row of five 30-square-metre homes alongside a slightly larger detached house that all share a similar internal arrangement, materiality and finishes. 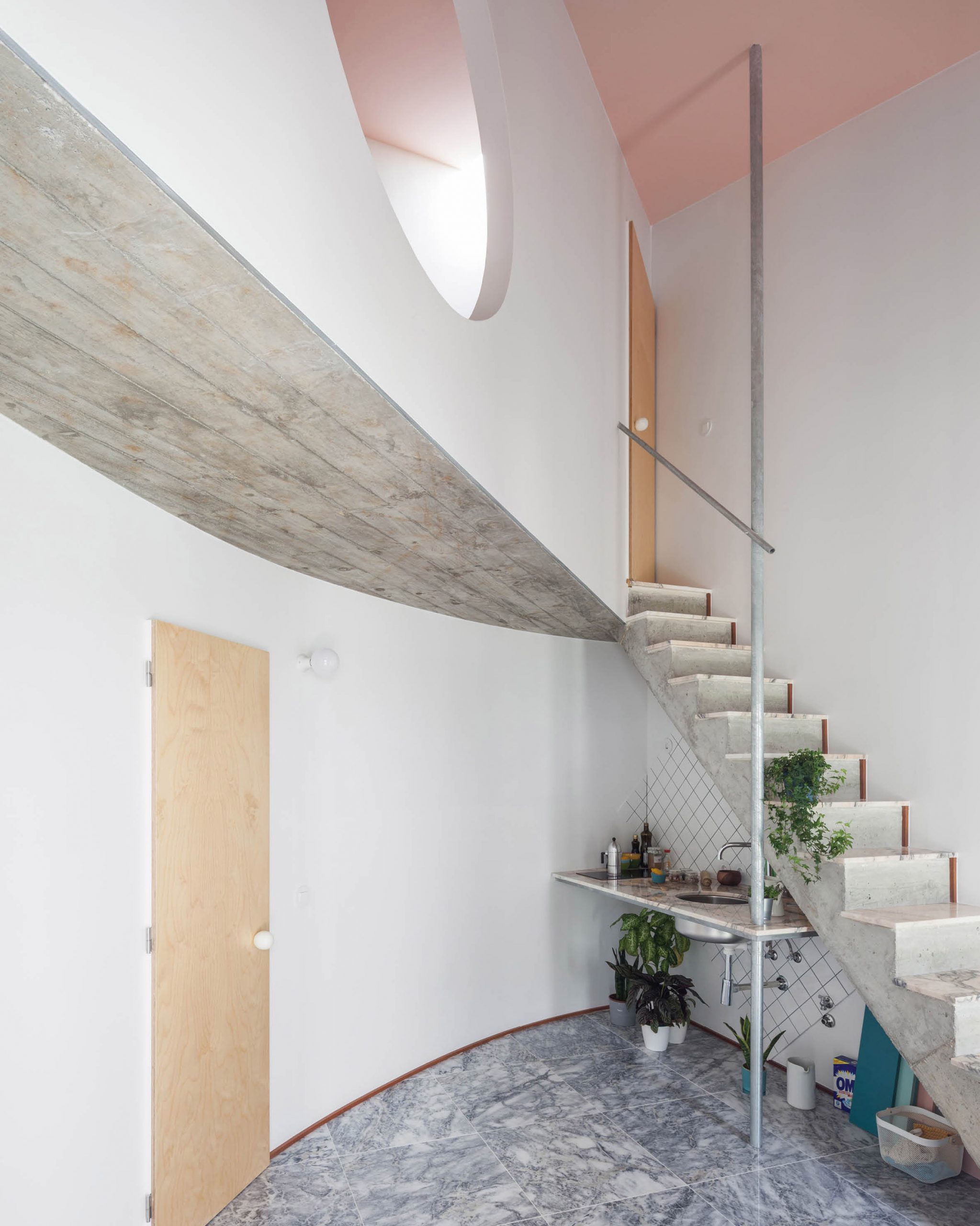 Each home has a living area on the ground floor lit by a pair of shutter-covered windows, one of which acts as the door, with a stair leading to a sleeping area that is placed above a bathroom.

“All the houses follow a very simple arrangement, a double-height social level below with a bathroom and a private space above,” said Fala Atelier founder Filipe Magalhães. 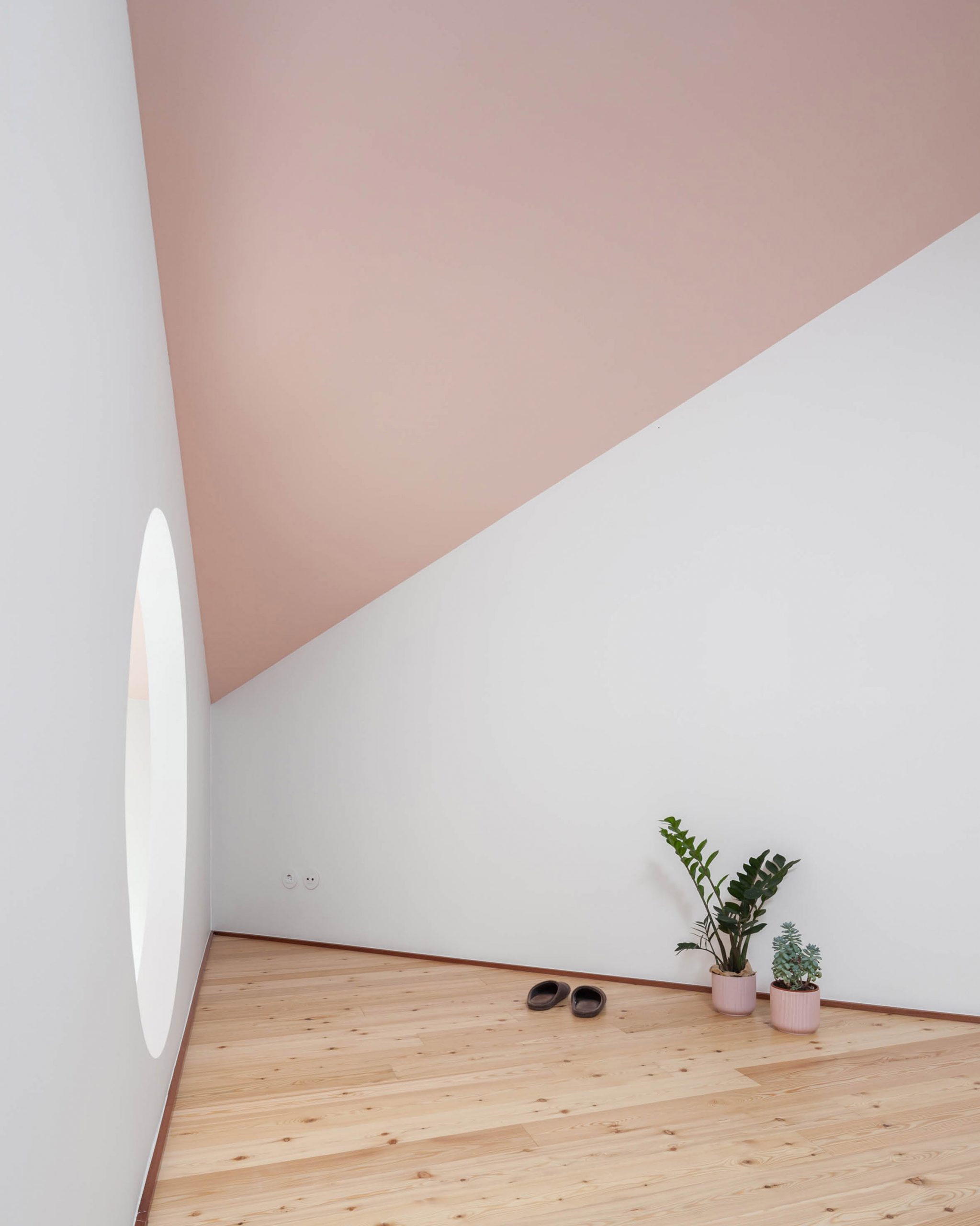 “We decided to sacrifice half of the top level to allow the social space of the houses to be double-height, which is a very uncommon luxury for such construction,” Magalhães told Dezeen.

“It has something to do with a certain architectural ambition of ours that [we aim to create] regardless of the limited qualities of the original building. 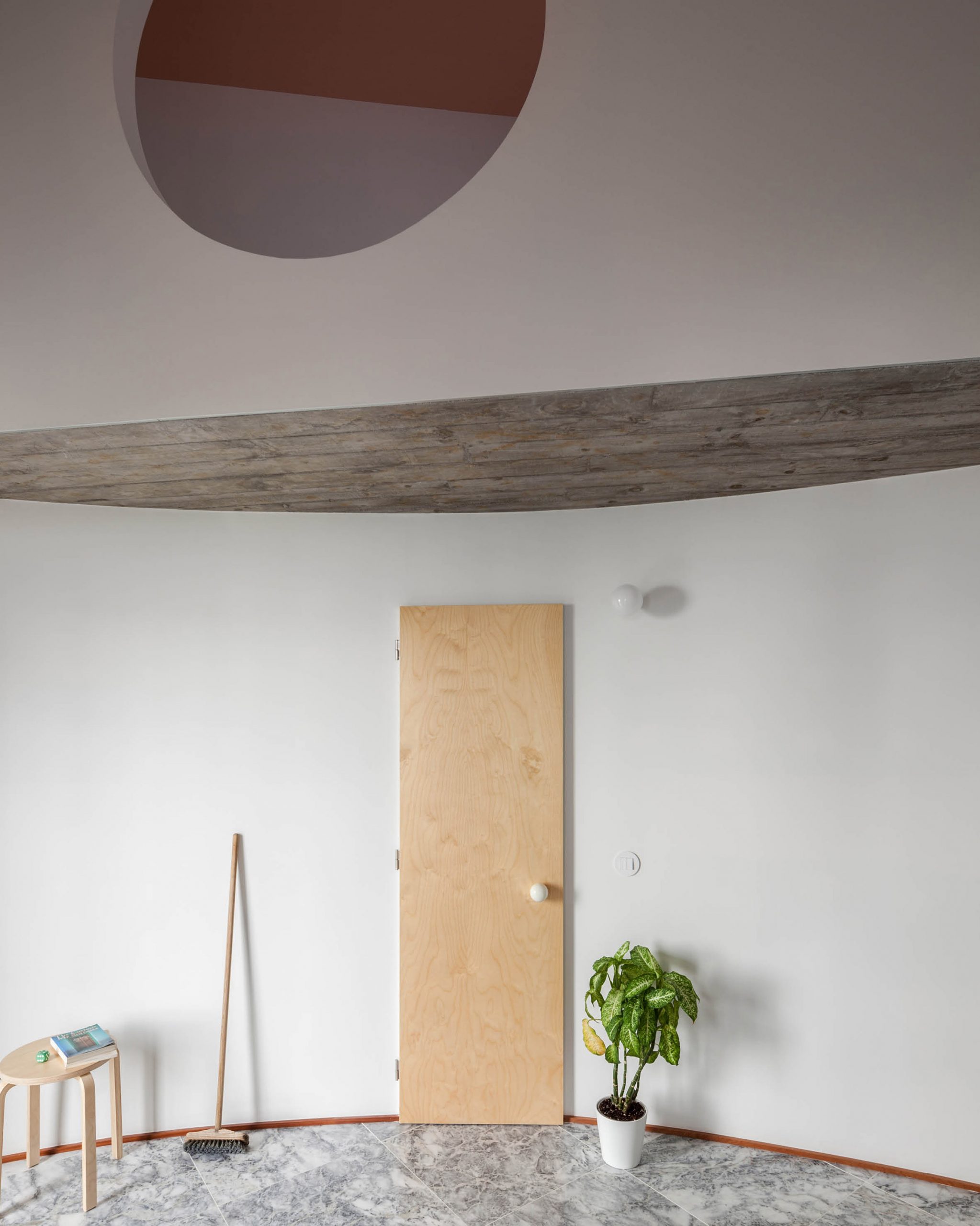 Throughout the row of small houses, Fala Atelier used geometric shapes to give the homes an identity. The upper room, which is lit by a skylight, overhangs the curved toilet wall and has a circular cut out that overlooks the living space.

“Each geometrical gesture defines a ‘sharp cut’ over the given frame. The overlaps of the cuts provide formal diversity within the granite shells and a feeling of contemporaneity,” said Magalhães.

“It was very important for us to detach the inner space from its context, to invent a spatial condition independent of the program or site.” 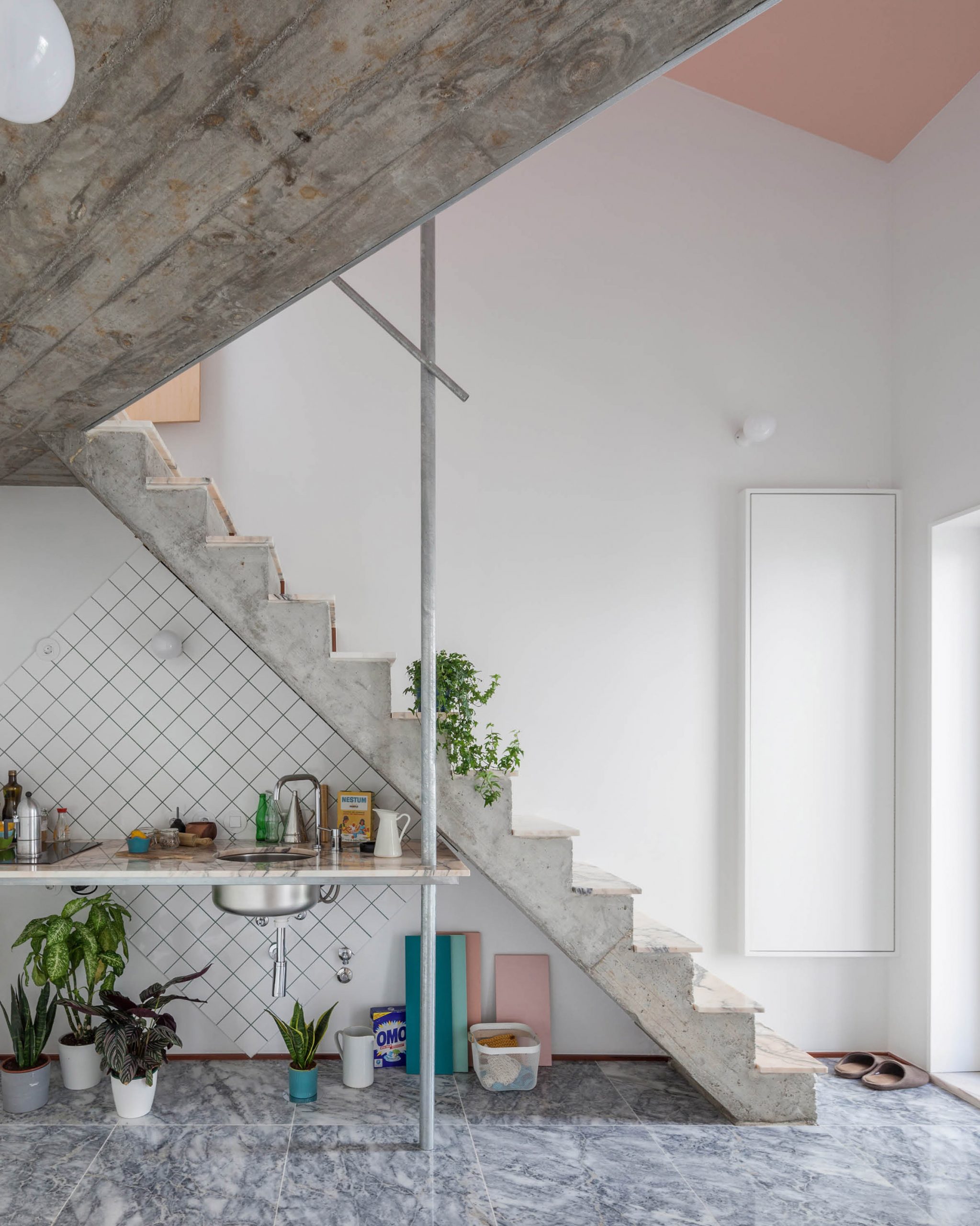 In each of the houses, the material finishes were uses to express the different uses of the spaces.

“Materiality is systematic and quite didactic inside the houses,” explained Magalhães. “Marble defines the public spaces pavements and wood the private ones.”

“The pink ceiling finishes the system and frames the white walls,” he continued. “All concrete elements were kept exposed.” 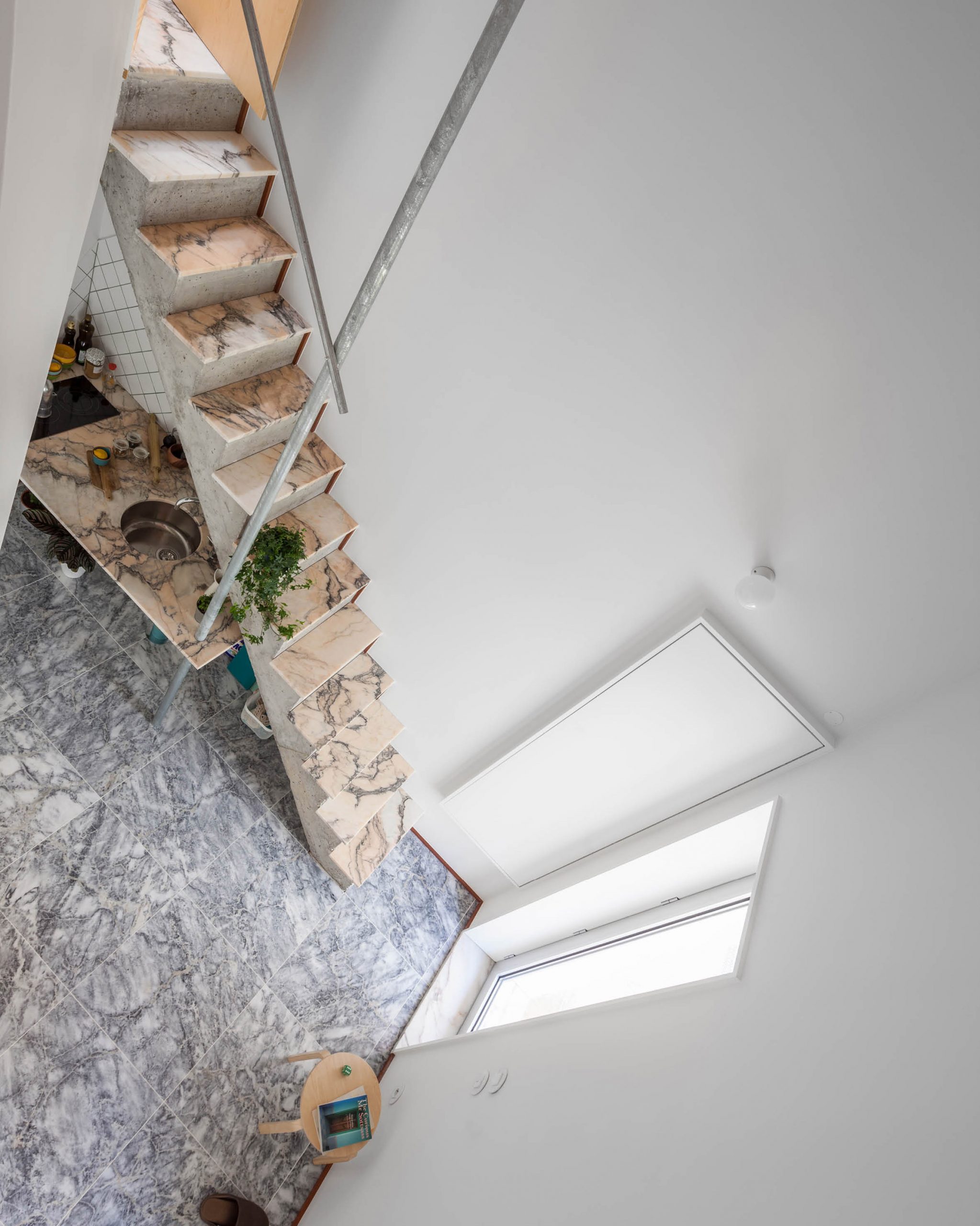 The homes are topped with a double roof made from pink panelling topped with metal sheeting, supported by a line of metal columns. All of the shutters were painted with teal and blue to unite the scheme alongside the public garden.

Magalhães expects the small houses to be occupied mostly by students and hope they will build a sense of community at the development.

“Some of the houses are already rented to foreign students and we look forward to seeing the ‘community’ feeling these neighbourhoods tend to create and reinvent as the new inhabitants move in,” he added. 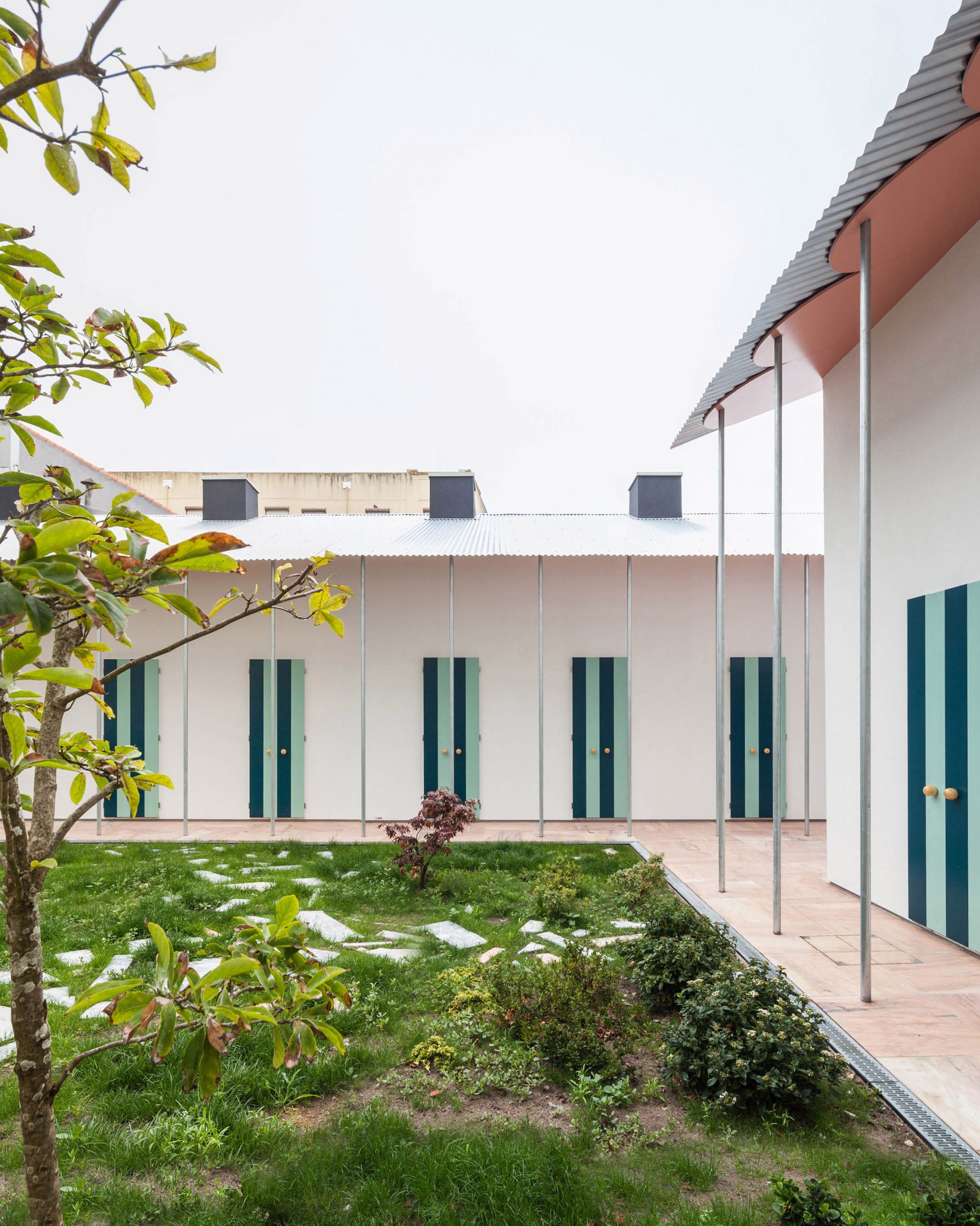 Porto-based Fala Atelier often includes geometric forms and colour in its architecture. The studio recently added a colourful shower tower to small granite house in Amarante, added a mint floor to an apartment in Porto, and renovated a 19th century house in Porto adding a series of colourful facades.

Photography is by Ricardo Loureiro.