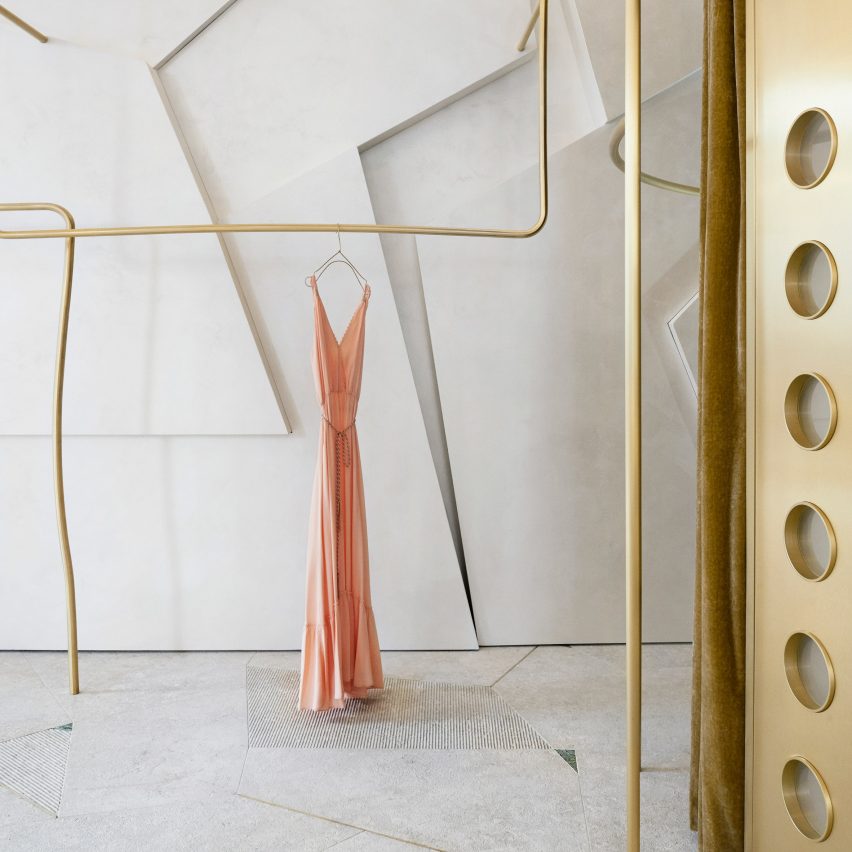 Madrid’s Forte Forte store occupies a corner plot in Salamanca – a glamorous district of the city known for its boulevards lined with luxury fashion boutiques and upscale restaurants. 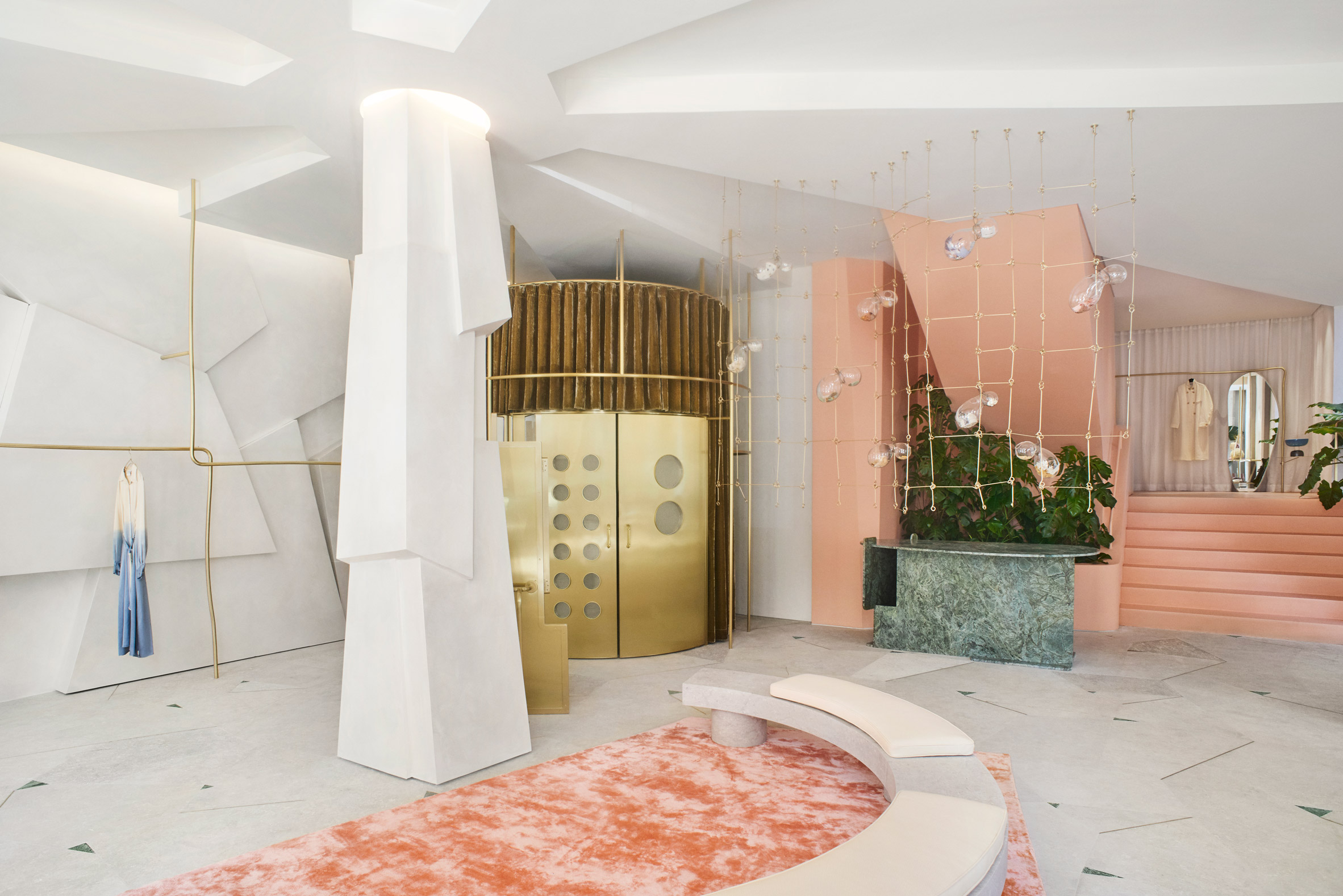 It was designed by the brand’s co-founder, Giada Forte and her partner, art director Robert Vattilana.

The pair devised opulent interiors for Forte Forte’s London, Milan, Tokyo and Paris stores, but wanted the new Madrid branch to have a more restrained aesthetic that still offered moments of “poetry and feminine delicacy”. 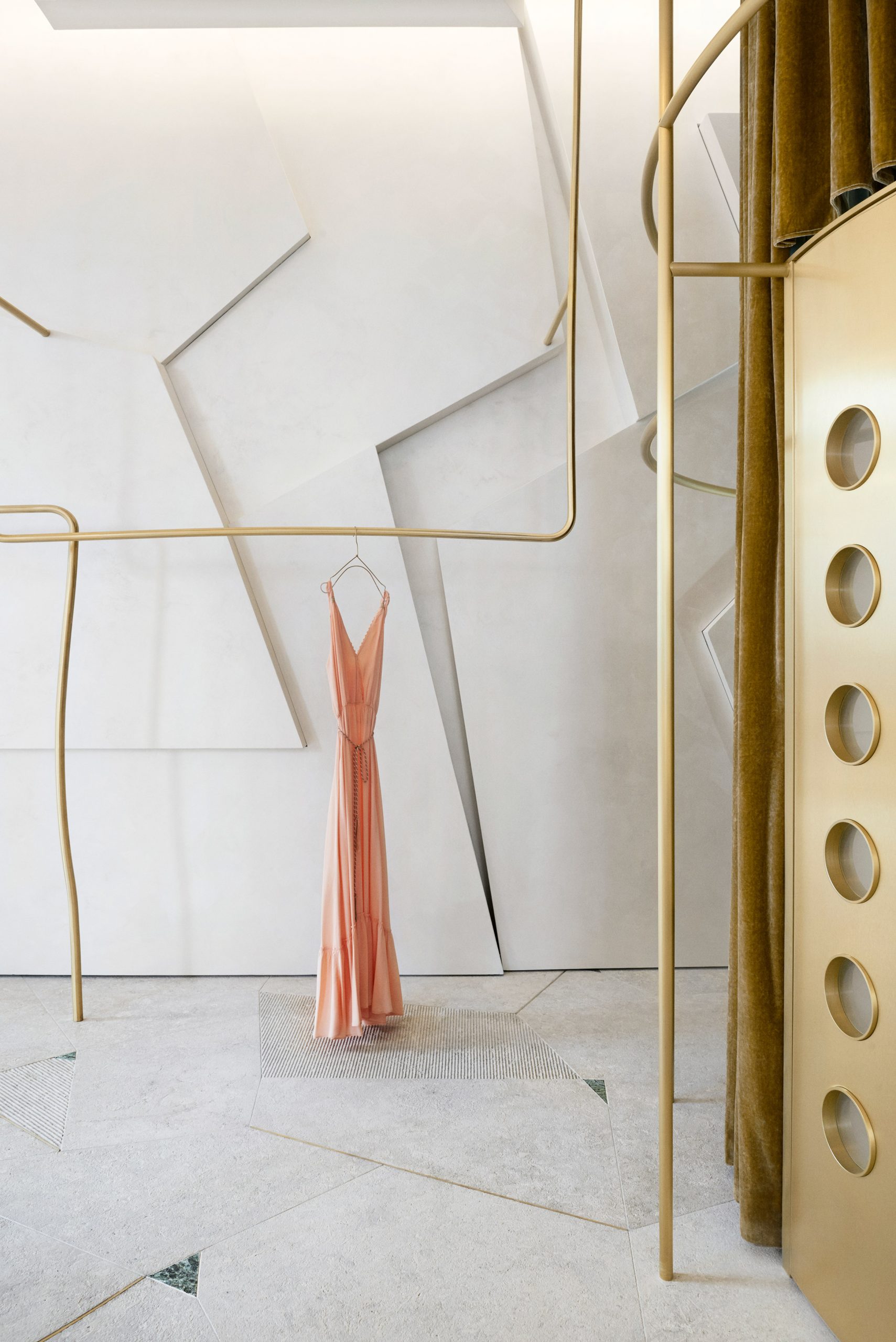 “[The store] is charged with a sensual energy polarized on the offset of masculine and feminine, curves and angles, geometry and sentiment,” Forte and Vattilana explained.

“There’s a recognizable grammar of surfaces, treatments, colors uniting the different spaces that’s born from our creative dialogue, but the narration takes on a different metric and tone.” 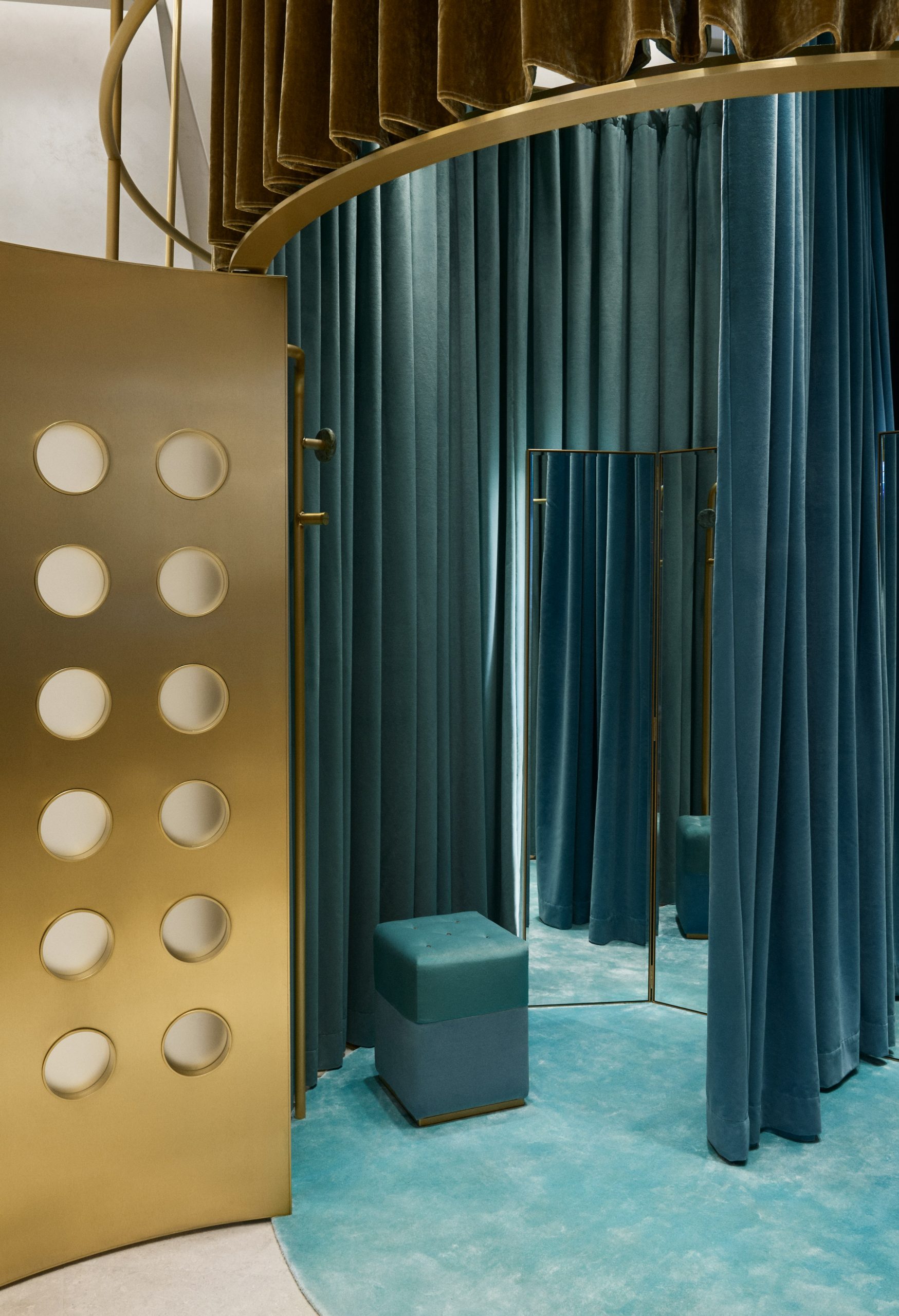 An off-white relief wall that features a haphazard array of raised geometric shapes runs down one side of Forte Forte’s ground level.

A structural column in the store has been given a similarly geometric form. It extends up through a circular opening in the ceiling that has been backlit to look as if natural light is beaming through from the outdoors. 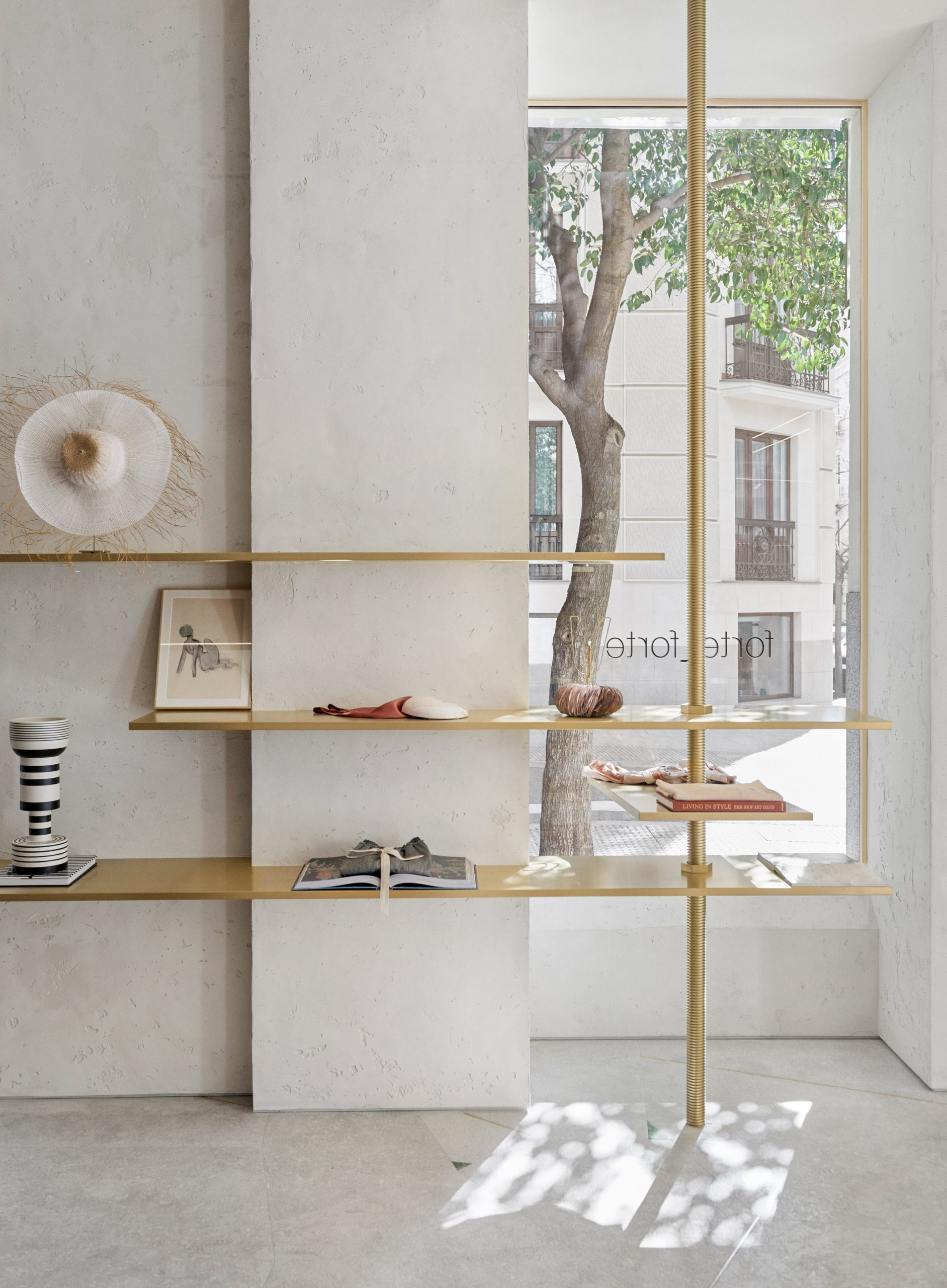 At the centre of the store is a low-lying semicircular bench perched on a mottled pink rug. The flooring that runs underneath has been inlaid with mismatch cuts of grooved and plain stone, as well as tiny triangles made from emerald-green Iranian marble.

The same veiny marble has been used to make the store’s door handle and its rounded service counter.

Directly above the counter, thin brass stems have been loosely arranged in a grid-like formation to form a hanging sculpture. It supports a handful of warped glass orbs.

Brass doors punctuated by small portholes can be pulled back to grant access to the inside of the booth, where teal-blue carpet has been fitted to match the blue underside of the curtains.

Garments are hung from spindly brass rails, while accessories and lifestyle items are presented on a set of brass shelves held up by a pole that’s been made to resemble an oversized bolt. 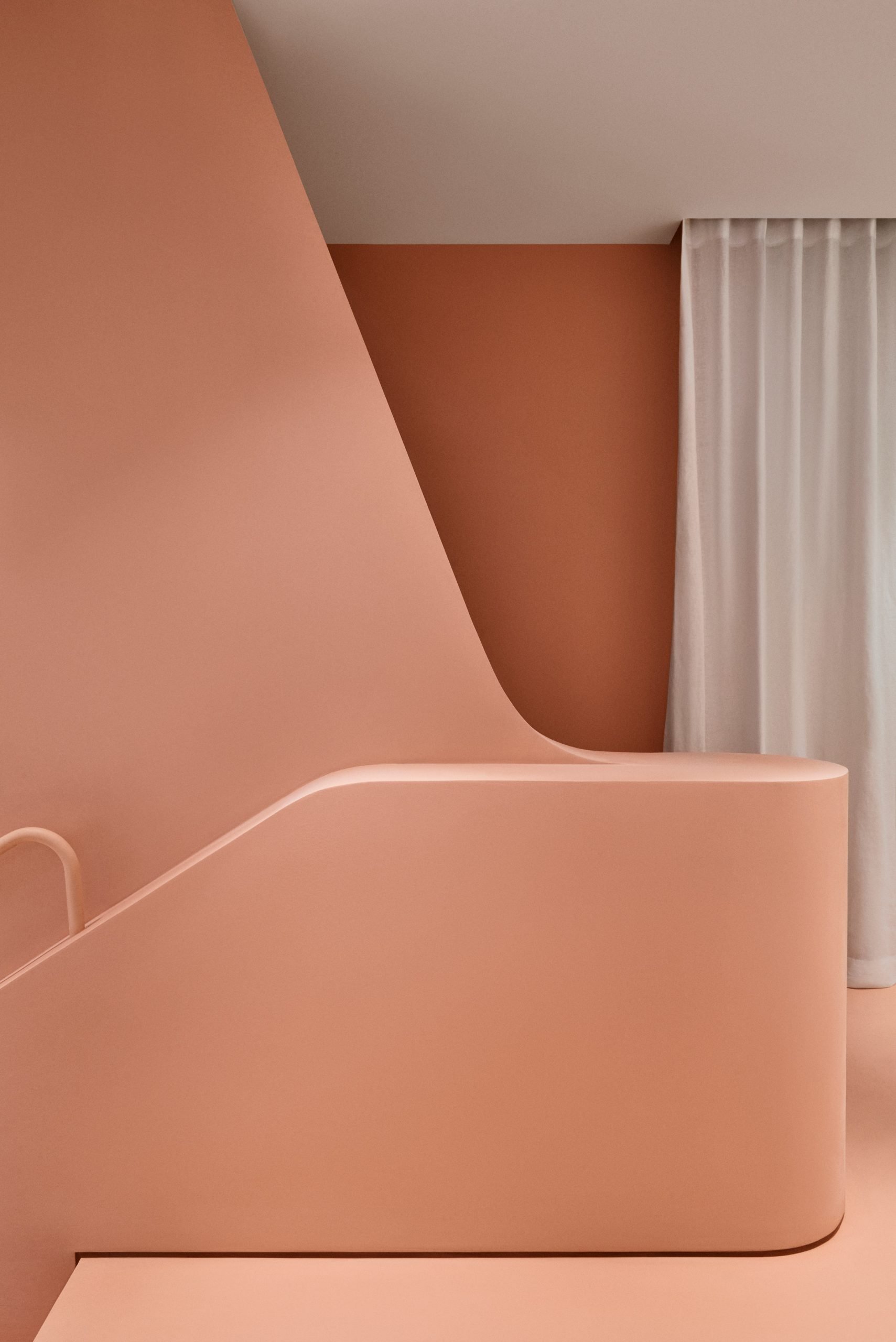 A curving blush-pink staircase leads up to the store’s second floor. Forte and Vattilana have used the expansive landing that sits between the staircase’s two flights of steps as an additional display area.

It’s dressed with a huge leafy plant, another brass clothes rail and an organically-shaped mirror. 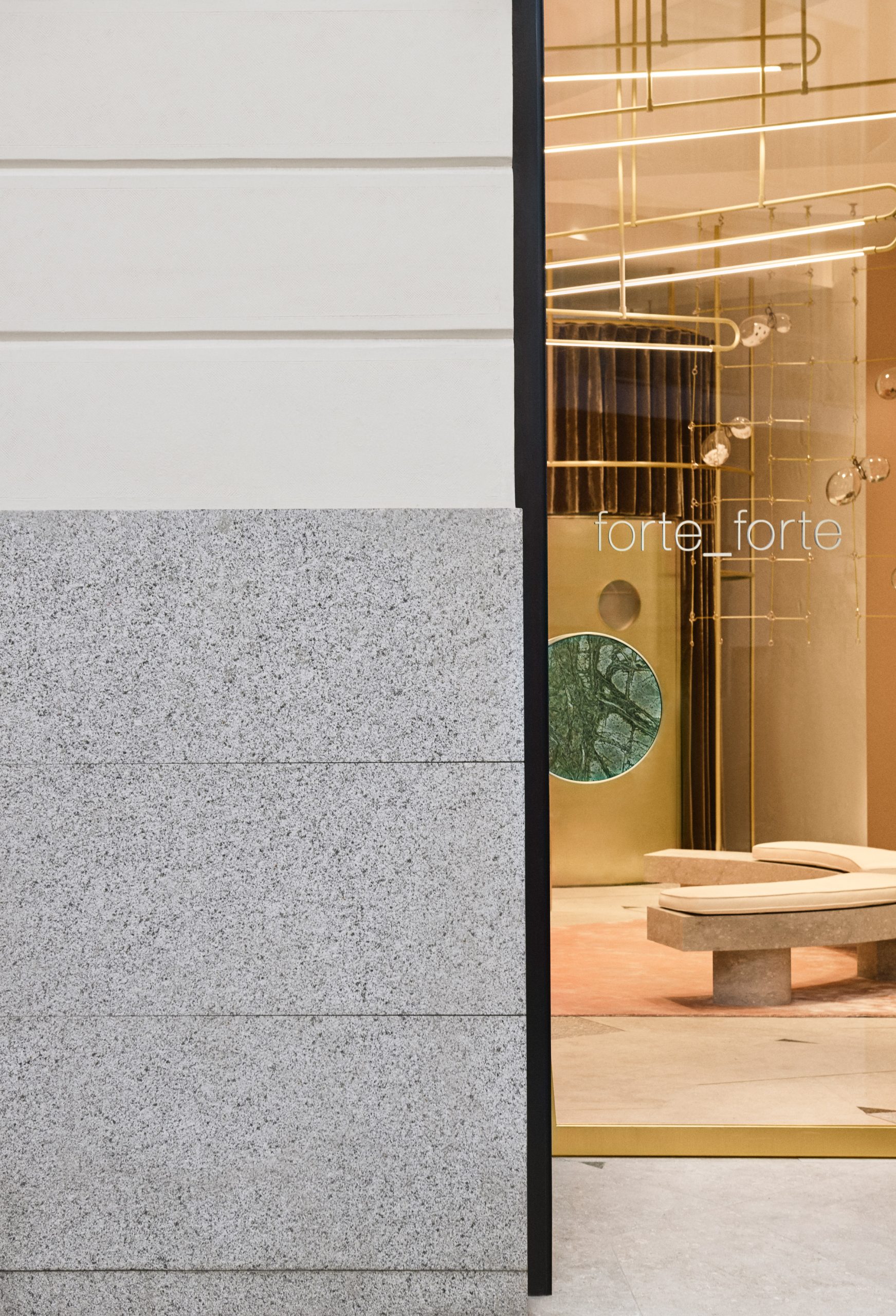 Forte Forte opened its first brick-and-mortar store in 2018 – until then, the brand’s clothing could exclusively be purchased online.

The inaugural store in Milan has been decorated with a curious array of found objects including a nude sketch, a lump of coral and a bust of the goddess Venus that came from an old French foundry.