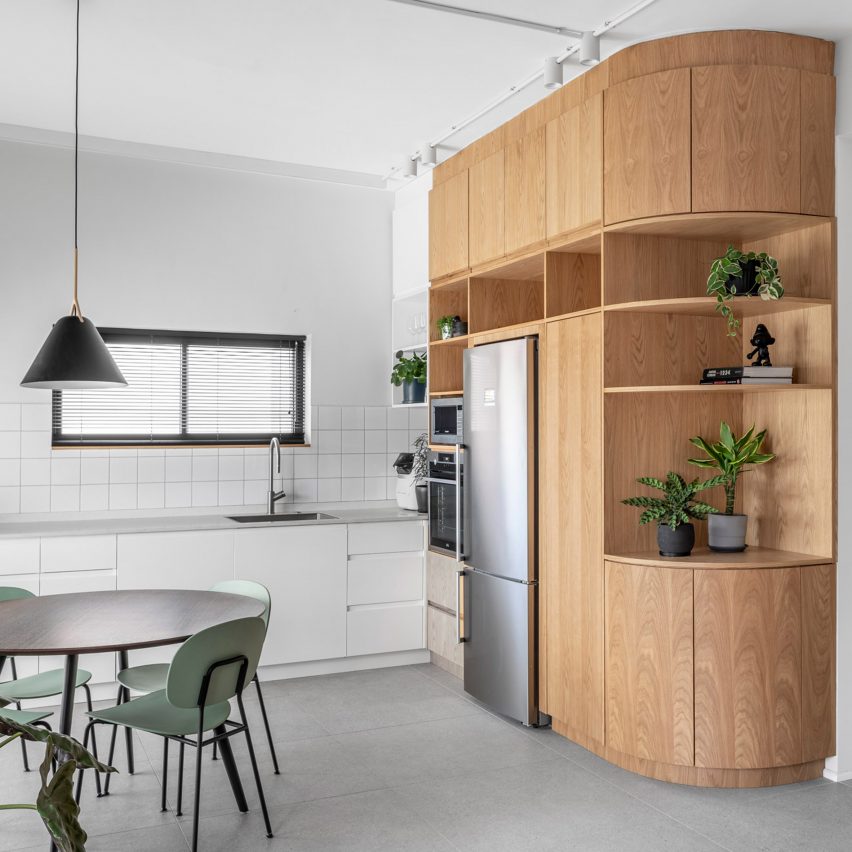 Tel Aviv studio Rust Architects has renovated an apartment in the Israeli city for a couple who both work from home.

The apartment is in a residential building in the city centre built in the modernist-era international style. 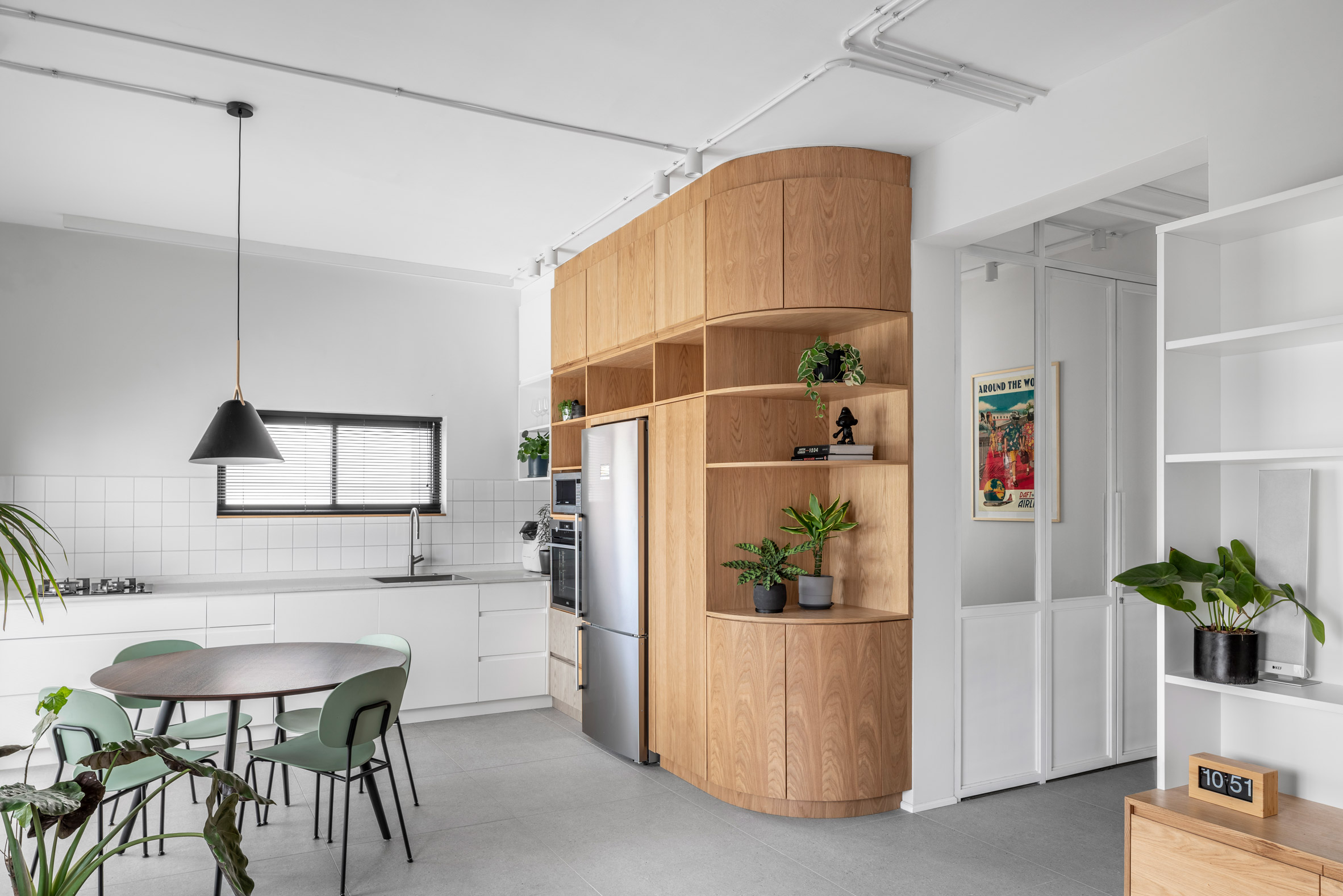 “It is in a modernist building, so we designed the interior as simple and modern,” Rust Architects founder Ranaan Stern told Dezeen.

“Similar to Bauhaus buildings principles, the apartment has a large span that brings in natural light but maintains comfortable proportions for the space and the hot temperatures of the Tel Aviv summer months.” 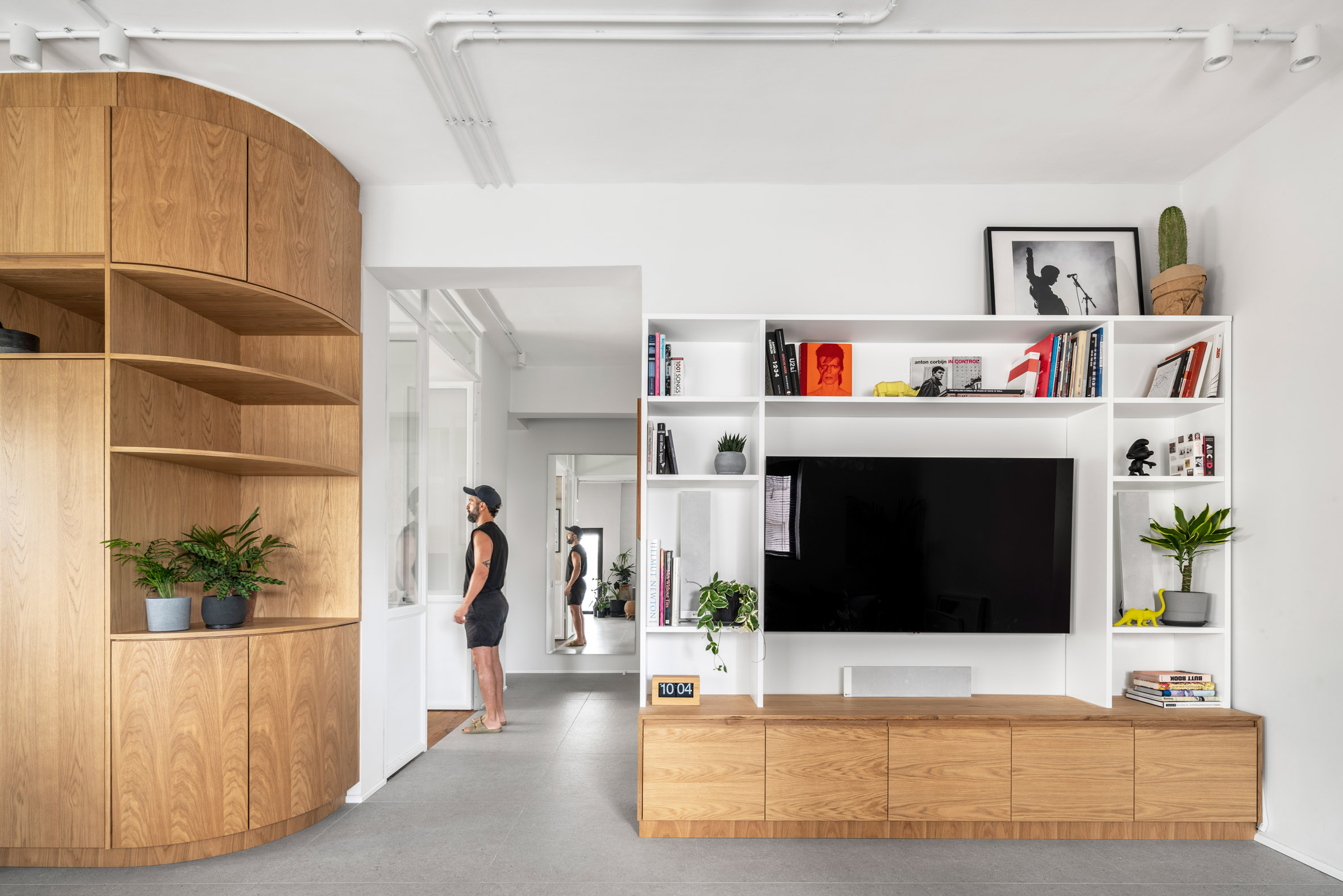 The apartment is for a young couple who are both professional photographers and designers.

“Both homeowners work from home, so proximity and visual angles between different spaces such as the workroom and living room were essential,” the studio added. 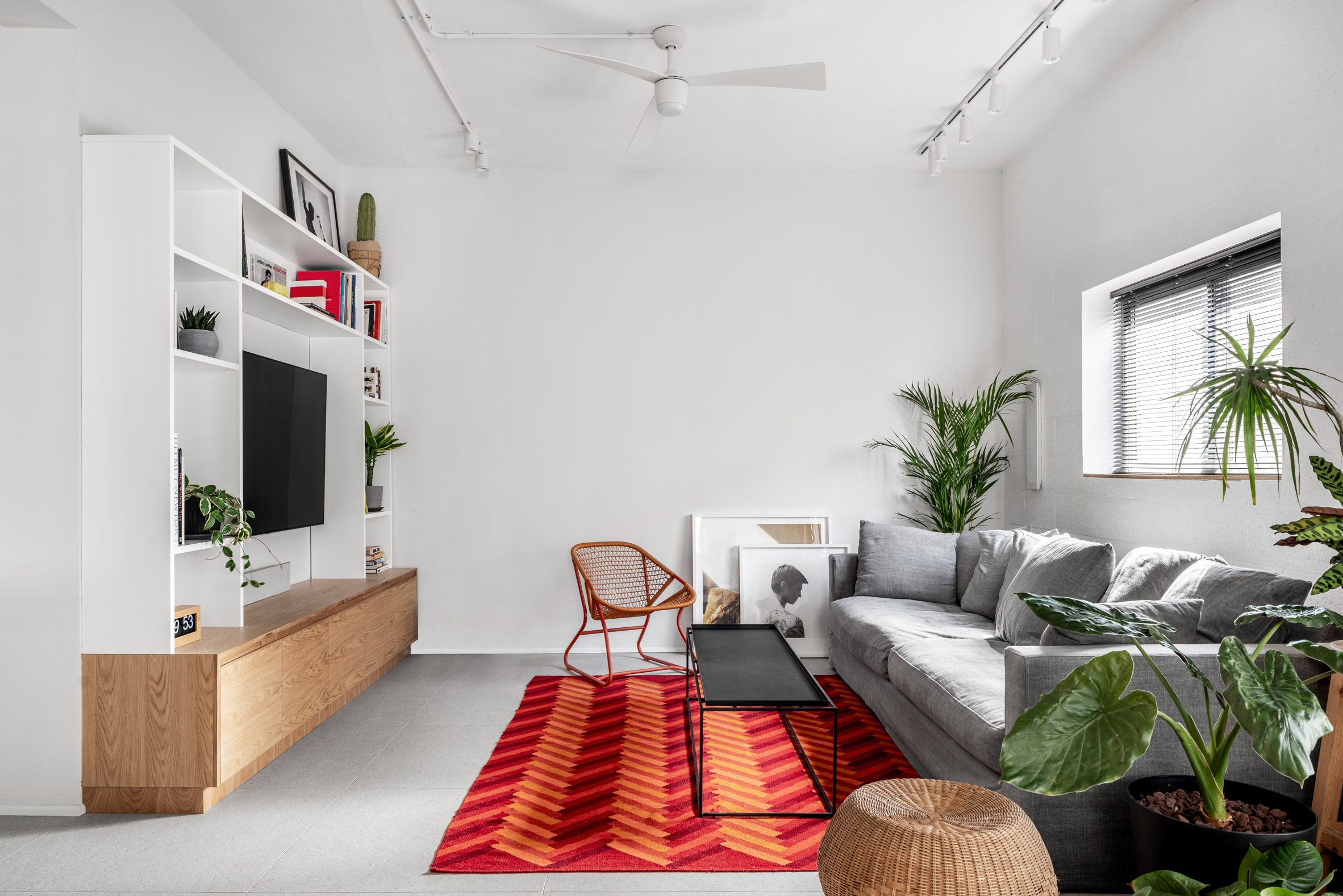 The apartment comprises an open-plan kitchen, living and dining area with sliding glass doors that access a terrace.

An L-shaped hallway accommodates the entry and accesses a home office, which was custom-made by Rust Architects and enclosed by a metal frame with glass doors. The partition allows natural light to pass into the corridor. 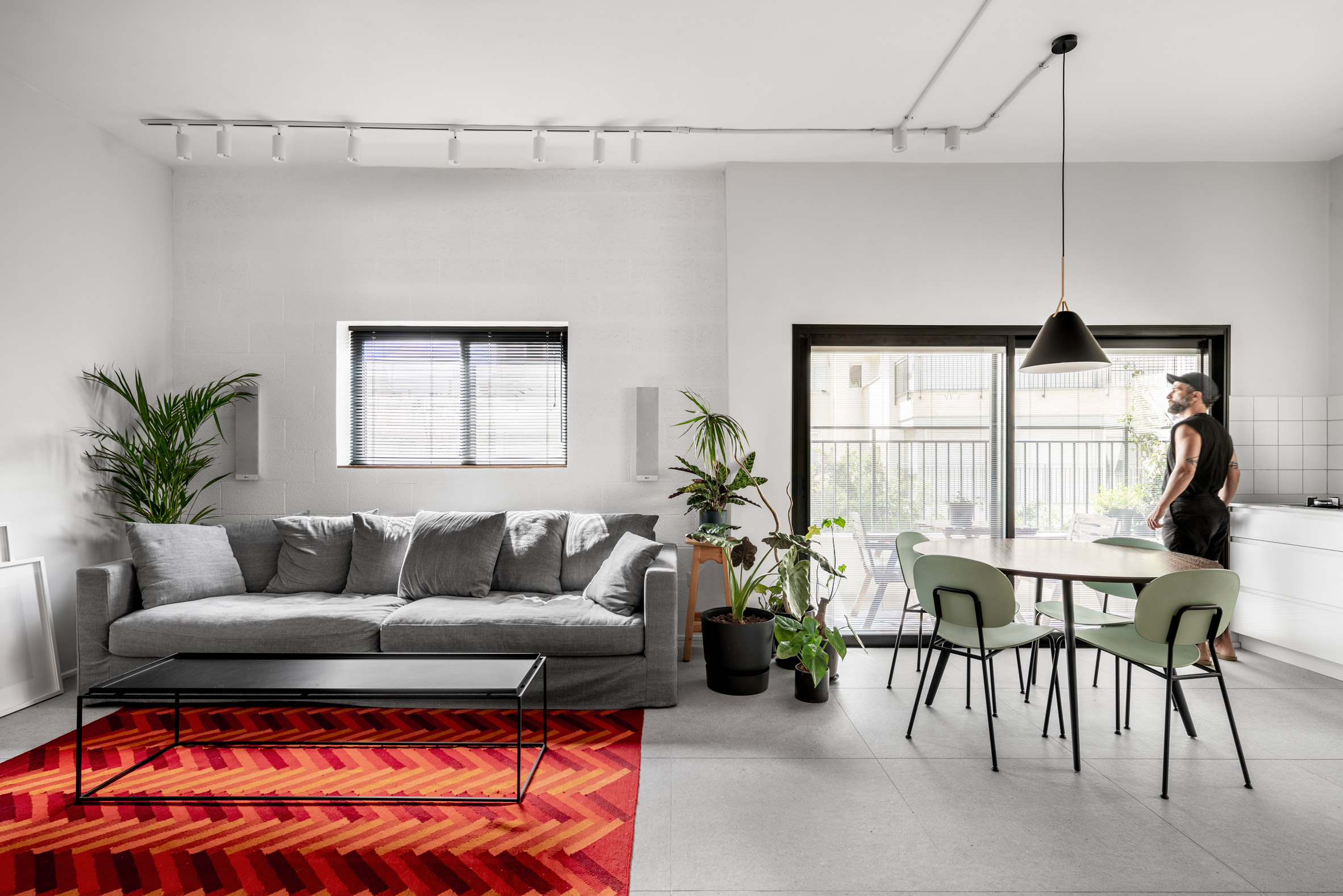 Various wood details also feature in the design, particularly a kitchen cabinet made of oak that houses the refrigerator and oven. Its rounded corner meets the hallway and has a series of shelves and doors.

A built-in media console in the living room nearby is also made of wood, and a wall in the office is clad in the same natural material. The touches of wood are contrasted with industrial details, such as an exposed concrete block wall in the living room and electrical systems on the ceiling.

There were left exposed by the studio in order to keep the apartment’s original height. 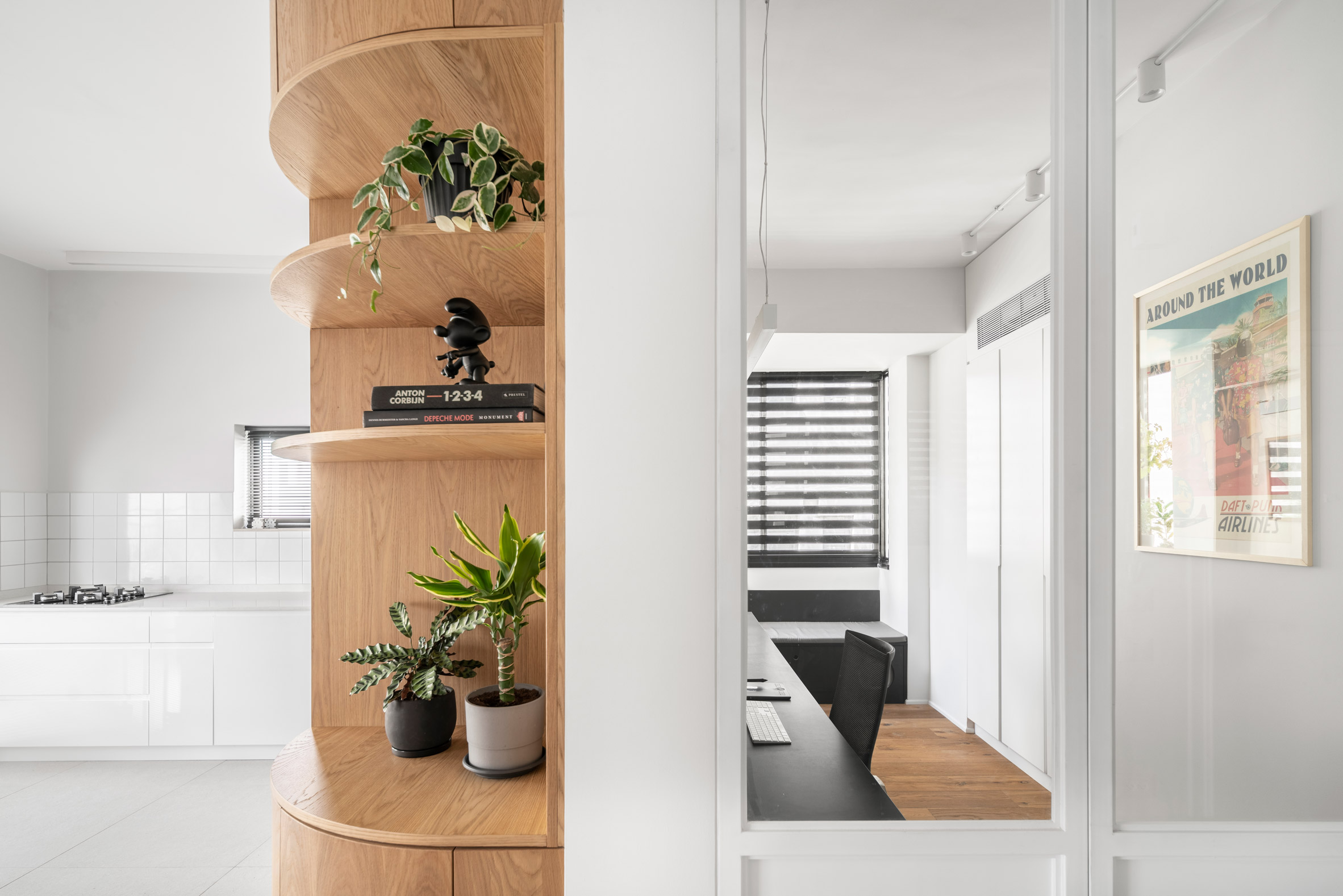 A variety of floor coverings provide visual depth across the unit, which otherwise features white surfaces and black window frames. “The concrete tiles on the floor produce a cool and pleasant feeling, especially during the summer months, and the natural oak in the carpentry creates a relaxed and warm feeling,” Rust Architects said.

The studio, which was founded by Stern in 2016, has also redesigned a 1960s apartment and created a home with cubby holes, shelves and cabinets – both are in Tel Aviv.

Photography is by Yoav Peled.