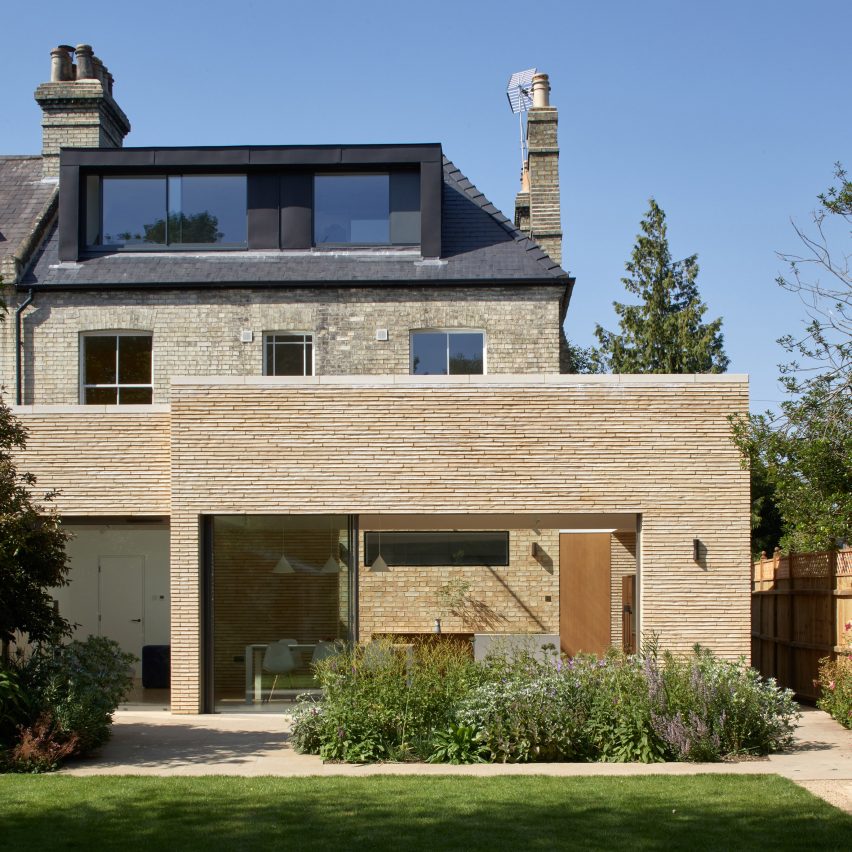 A slender-brick extension wraps around this semi-detached house in Cambridge, which has been renovated by Neil Dusheiko Architects to also include a charred-wood sauna and gym in the garden.

The London-based architecture studio refurbished the Victorian semi-detached home, called Sun Slice House, by adding a rear extension that wraps around one side of the building, in addition to constructing a spa in its garden. 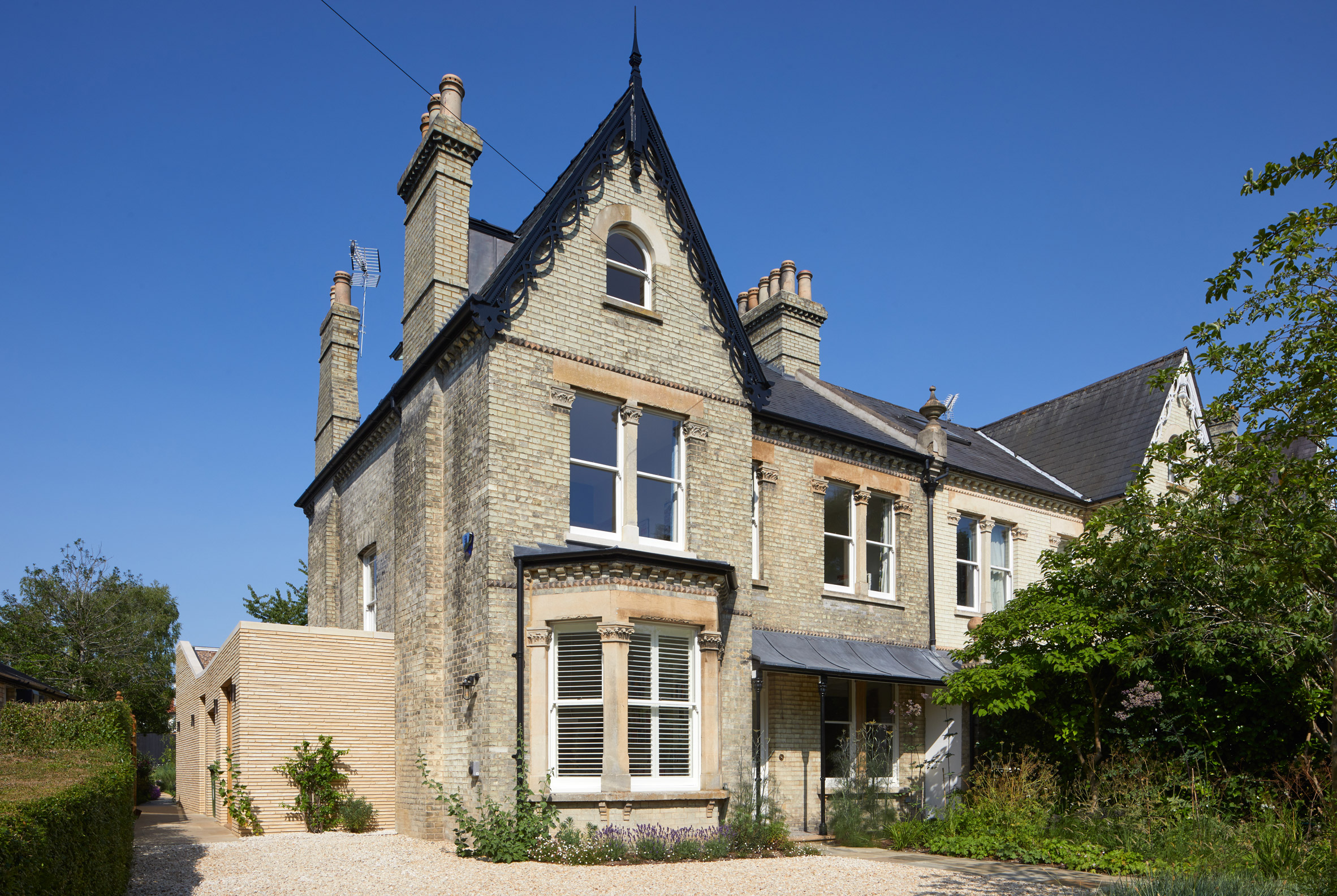 The rear extension contains a kitchen and dining area, a working area with three desk spaces and a TV room. A new main entrance was also added to the side of the home.

Neil Dusheiko Architects clad the extension with a slim, pale brick that offers a visual contrast to the main house while still echoing its original brickwork. 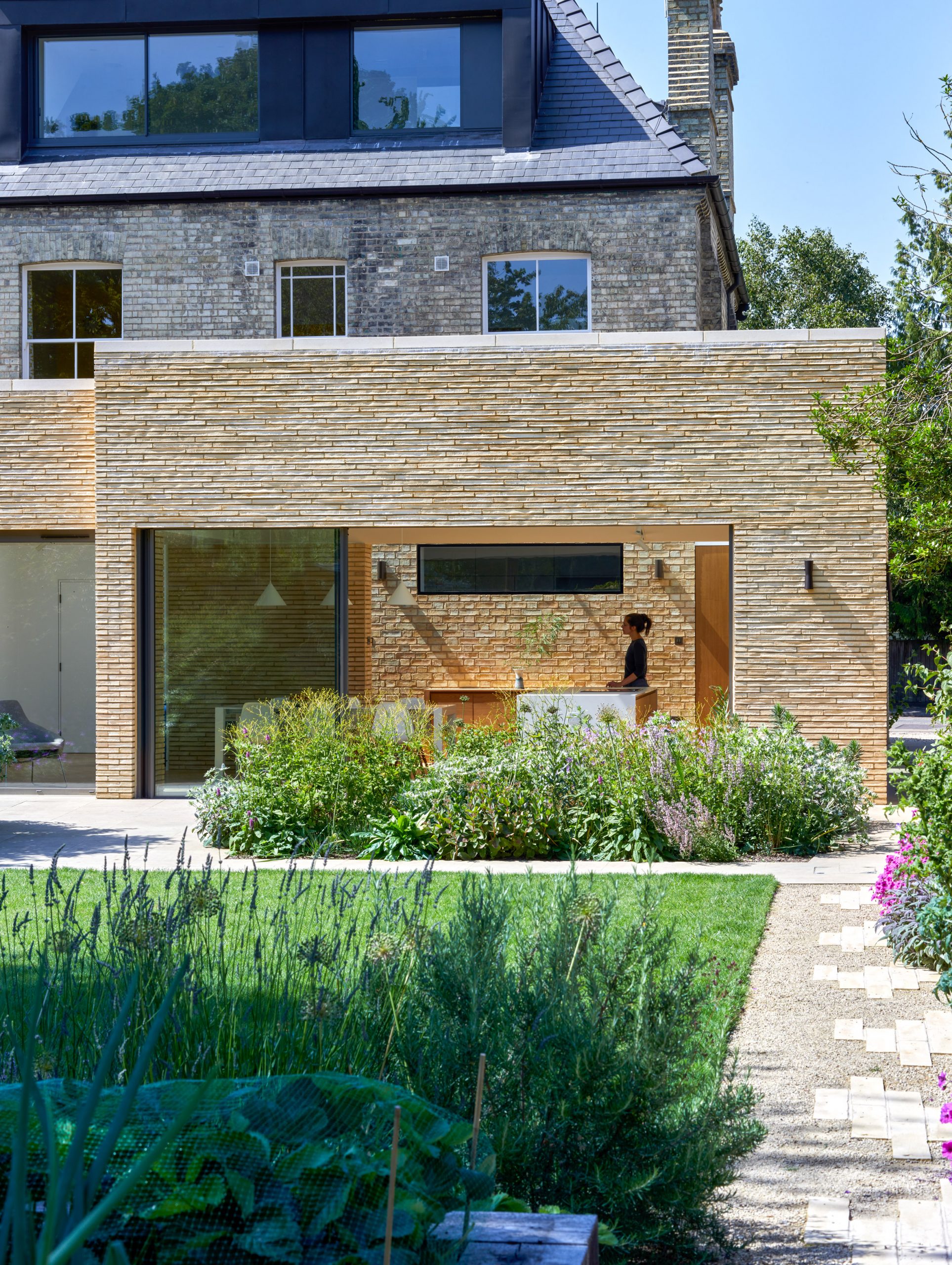 “We wanted the extension to feel like it was enveloping the existing home, creating a new layer around the older volume so that they would read together,” explained studio founder Neil Dusheiko.

“We searched for a material and massing concept connecting the retained parts of the house to the new extension,” he continued.

“We achieved this through using a slender handcrafted brick which harmonises with the yellow stock brick of the original house.” 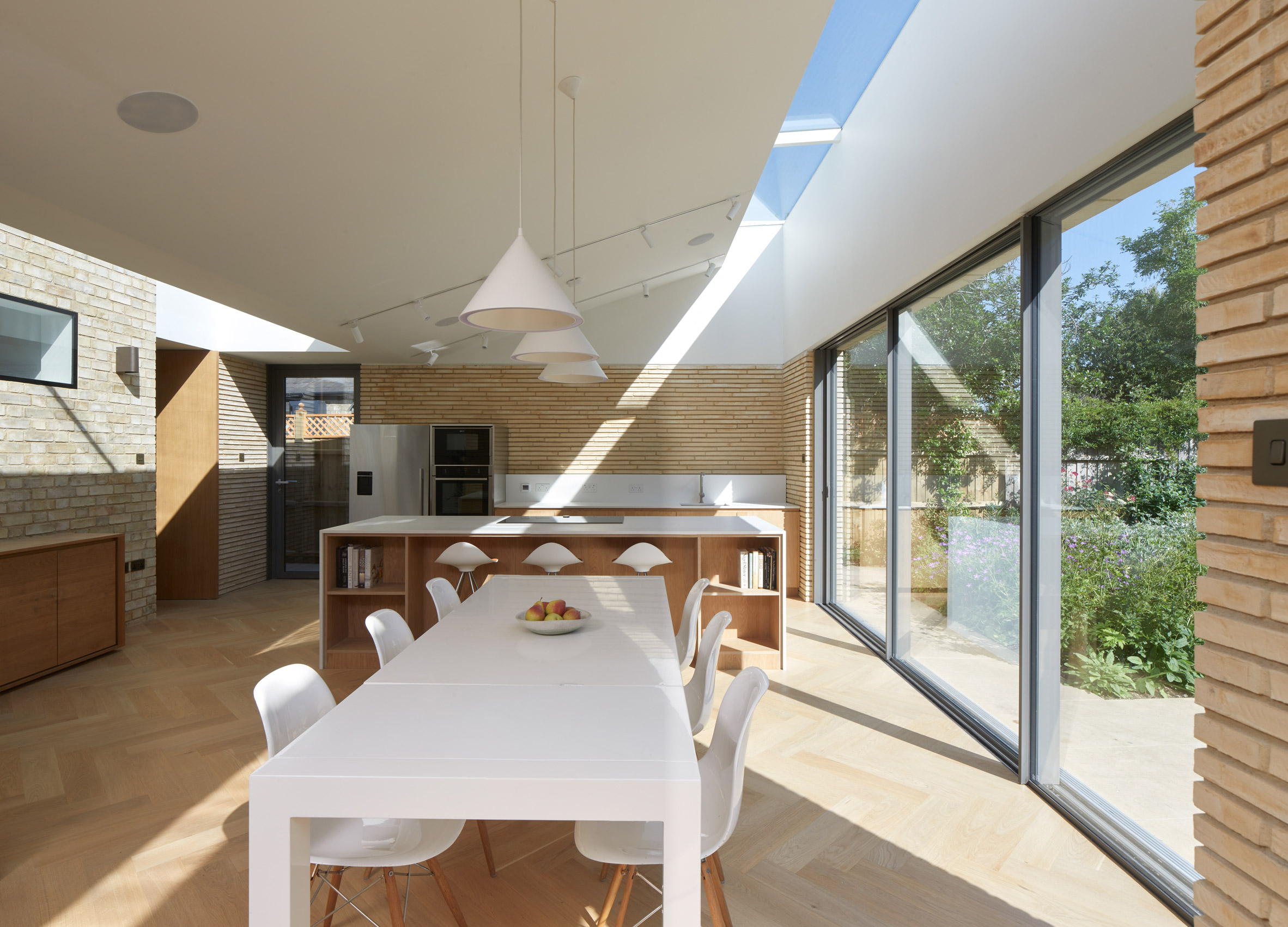 The slender, pale bricks were also used throughout the interiors of the extension, which is lit by a long roof light, to create a marked differentiation between the building’s new and original spaces.

“We wanted to create a clear distinction to the parts of the house we were retaining to be read in subtle contrast to the new extension,” explained Dusheiko. 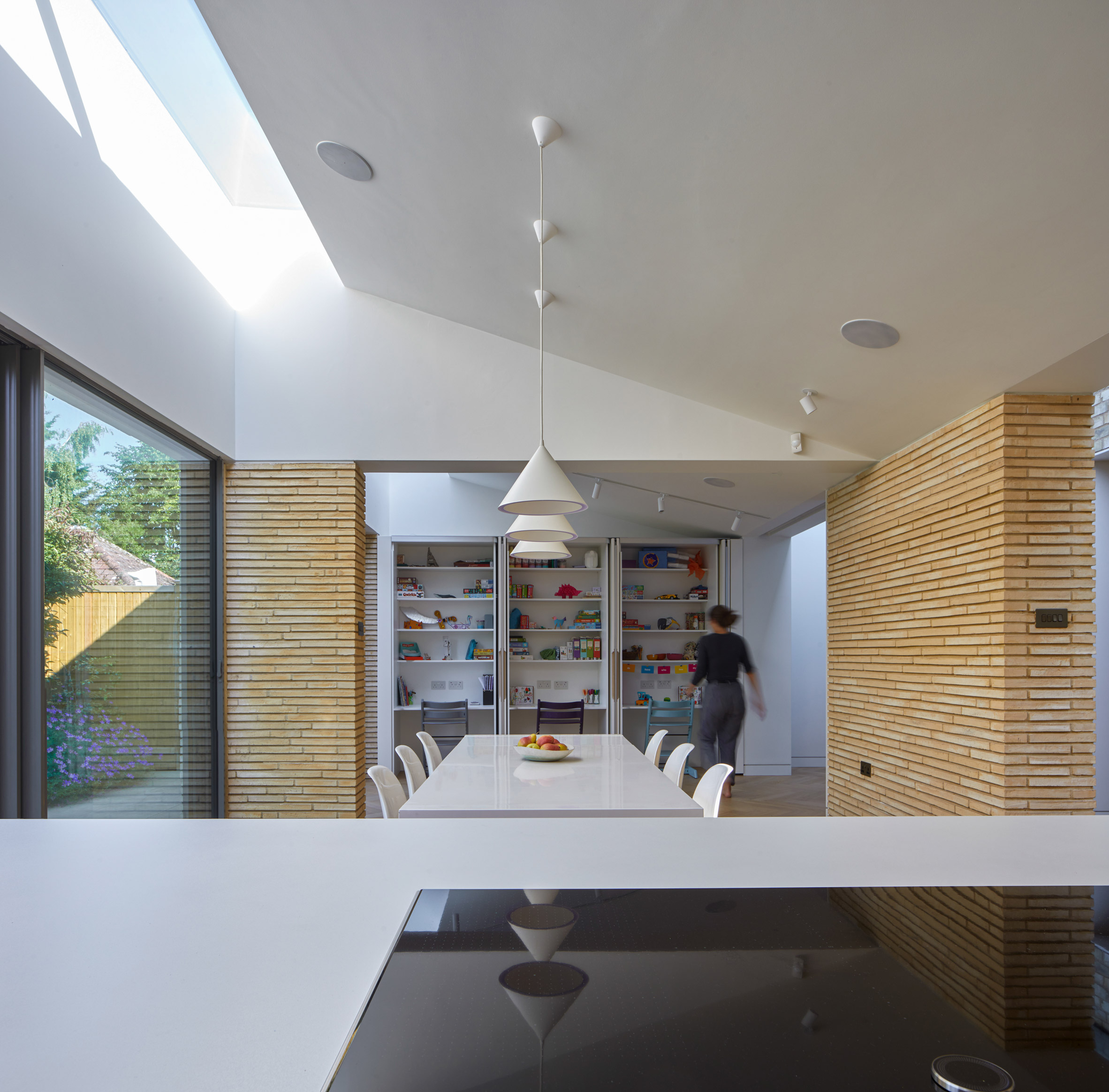 Large, glass sliding doors open up the extension to the building’s garden, which was landscaped by Jane Brockbank and contains an outbuilding that the studio has named the Dark Spa.

As its name suggests, the Dark Spa was designed to contrast to the extension’s pale brick exterior, and is clad in charred black timber.

“The charred-black-timber cladding absorbs light and shadow and is seen as the antithesis of the Sun Slice House,” said Dusheiko.

“Where the brick of the house is roughly formed, its horizontal coursing allows the unevenness of its surface to be read through shade – the Shou Sugi Ban-clad exterior of the Dark Spa does the opposite.” 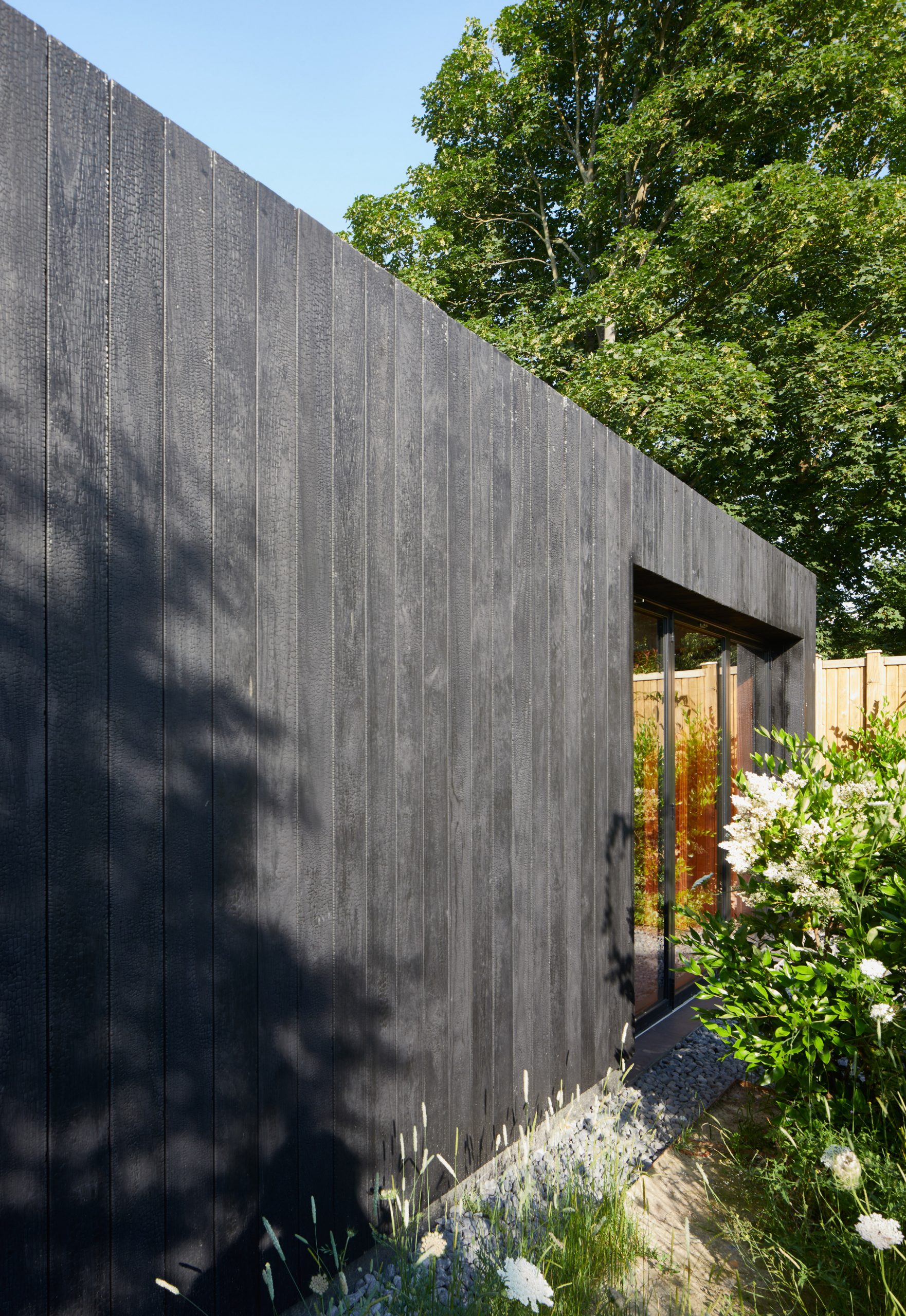 Unlike many back-garden outbuildings created in the UK that contain office space, the Dark Spa is dedicated to leisure. It contains a sauna, Japanese soaking tub, shower, gym and relaxation room with a fold-down bed.

Walls in the spa are clad with Sapele timber, while the floors are made of black slate. Two skylights were positioned above the shower and changing area. 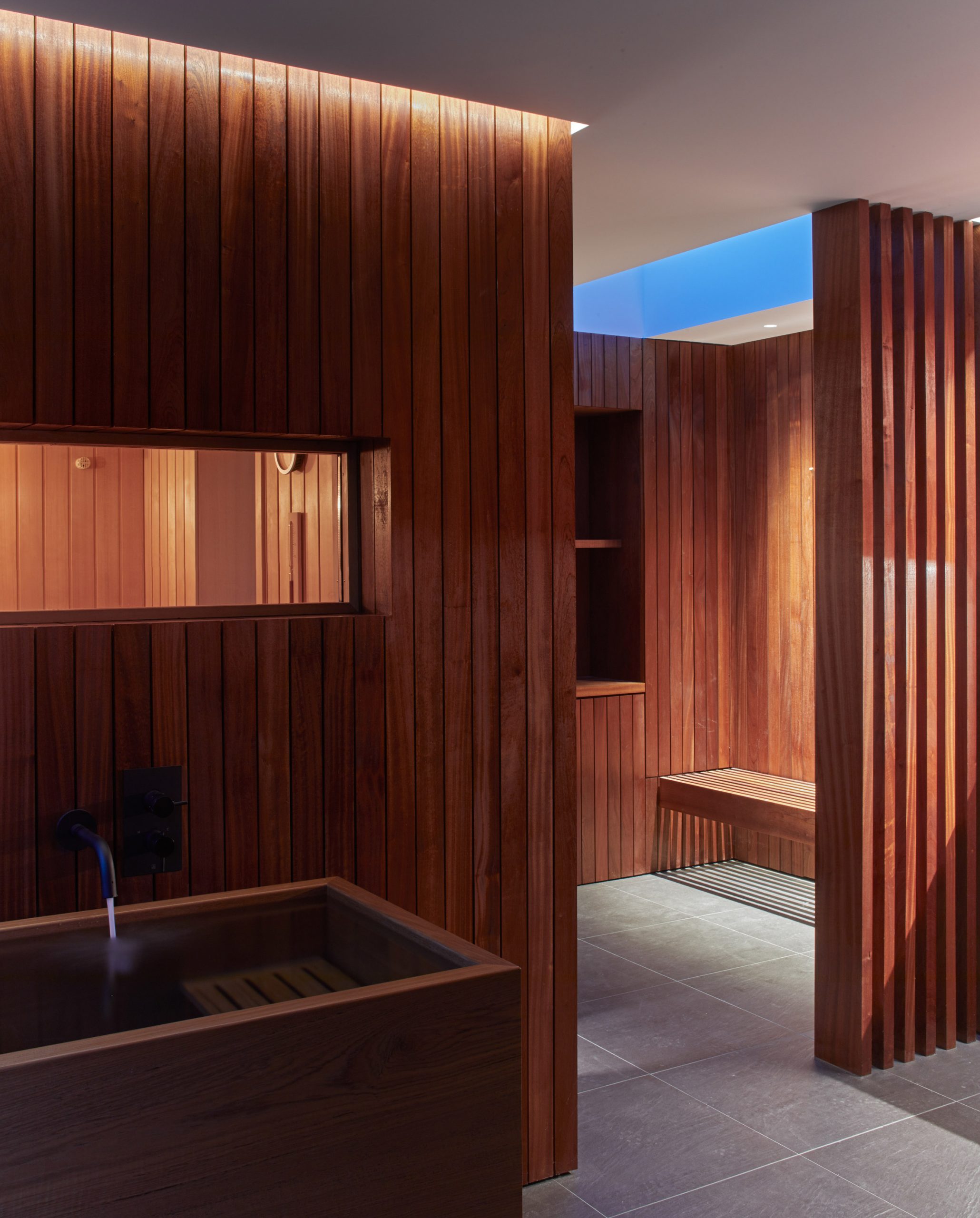 “It does not contain any space for work,” explained Dusheiko. “The Dark Spa is purely there for exercise and relaxation – it is silent and mysterious.”

“There is an inward focus here, and the feeling we wanted to create was a sense of relaxation and detachment from the every day to allow one to relax and unwind completely,” he continued.

“It is a space for the elements, light, stone, water and wood.” 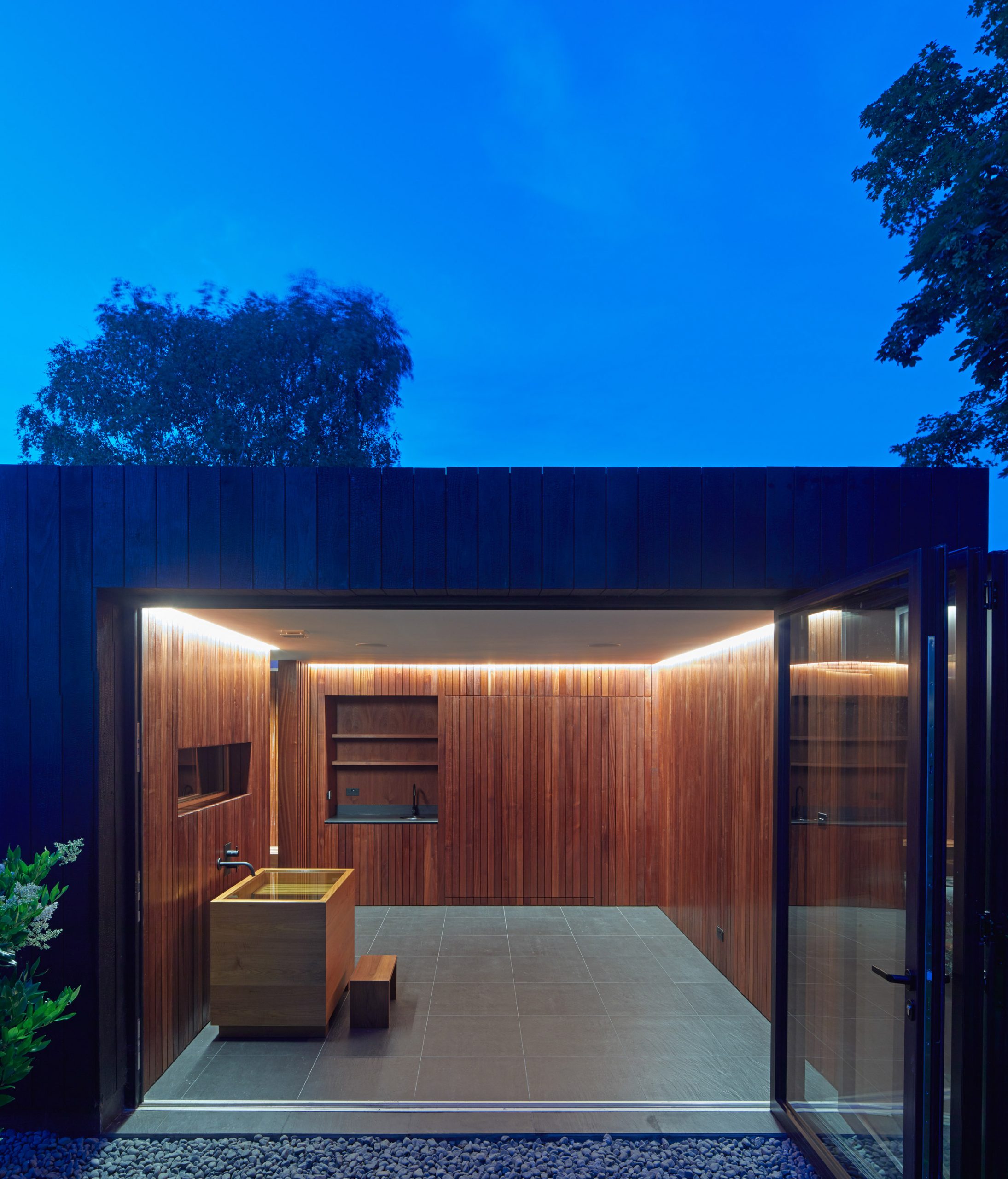 Dusheiko established Neil Dusheiko Architects in 2009. The studio has previously designed an office-cum-yoga studio for a north London house that is also clad in charred timber and a home for the founder’s father-in-law, featuring a wall of ceramics and glassware.

Photography is by Edmund Sumner unless stated.