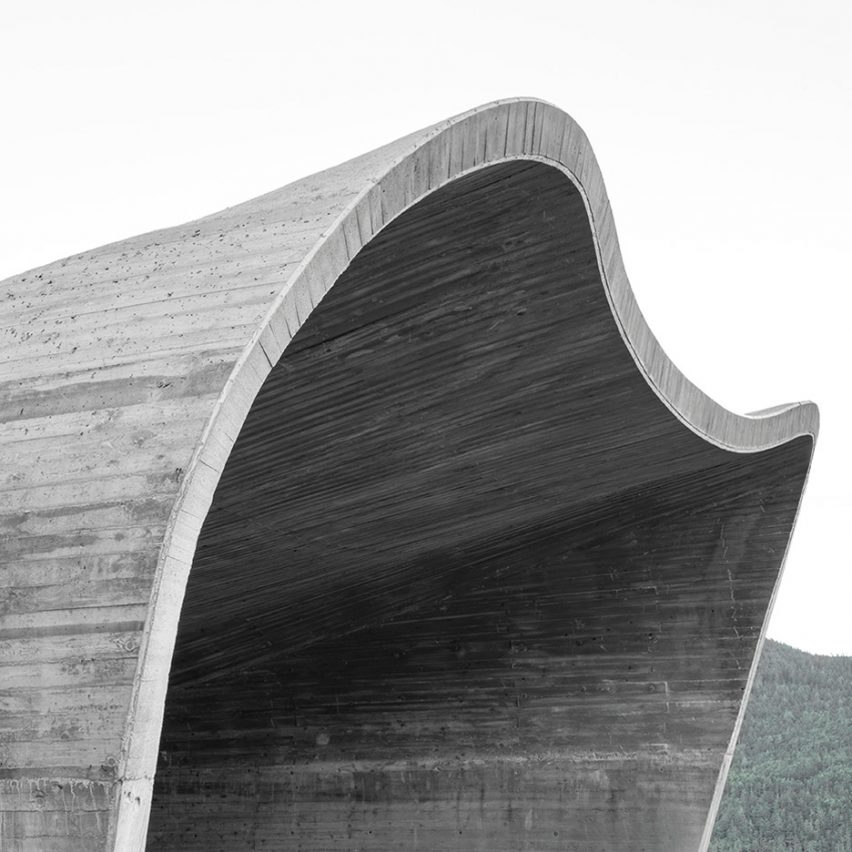 A road tunnelling through mountains in South Tyrol has been given undulating concrete portals and sculptural chimneys of weathering steel by MoDus Architects.

The Italian architecture practice designed these elements as part of its work on the Central Juncture Ring Road Bressanone-Varna in northern Italy. 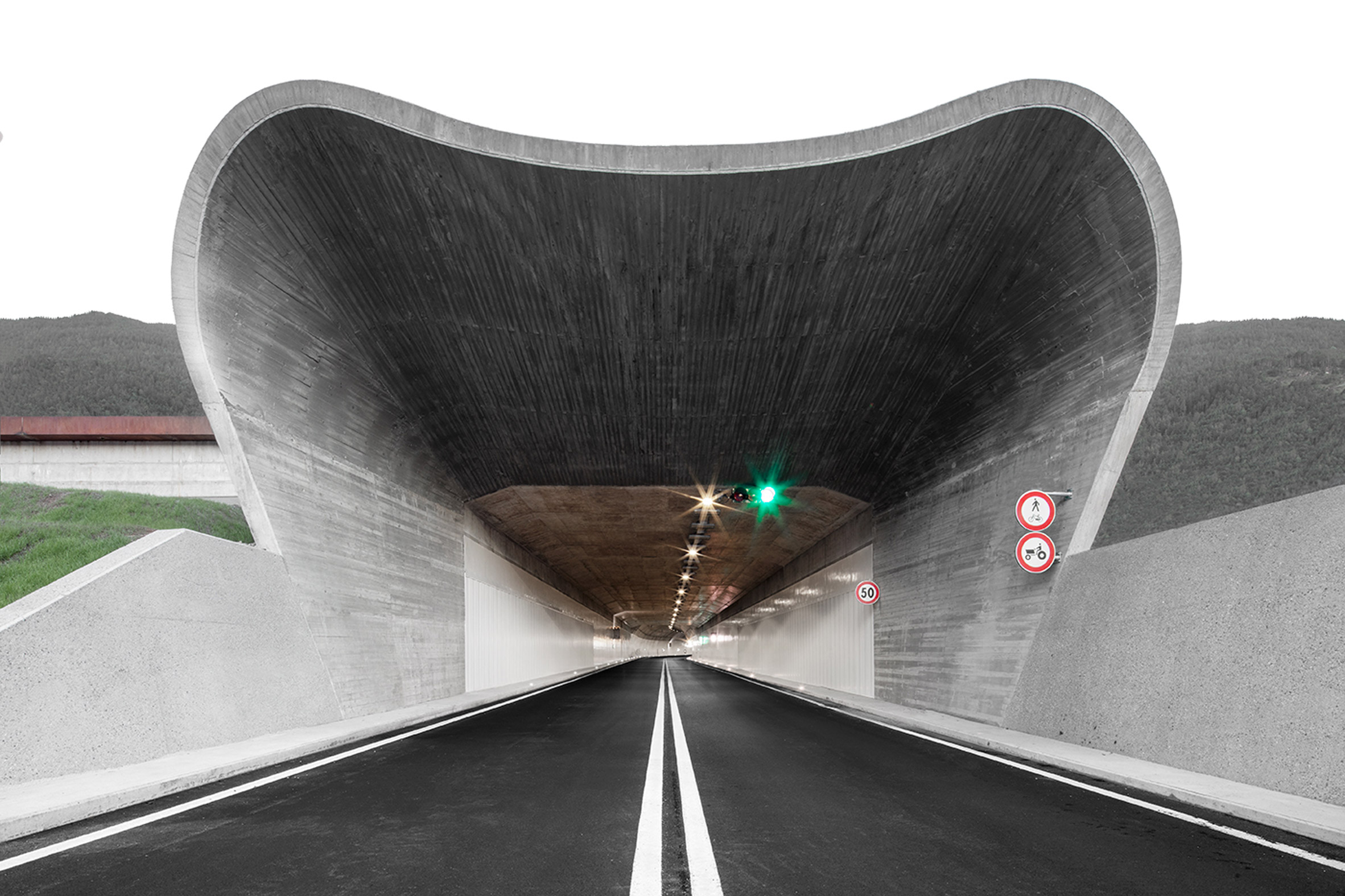 MoDus Architects was asked to design a series of interventions – including signage, acoustic barriers, tunnel portals and ventilation chimneys – for the three-mile-long ring road that connects Varna to Bressanone, bypassing the latter’s historic city centre.

This completed part includes a U-shaped portal near Bressanone’s city centre that accesses a tunnel through the mountainside that opens through another gateway to a T-shaped junction. 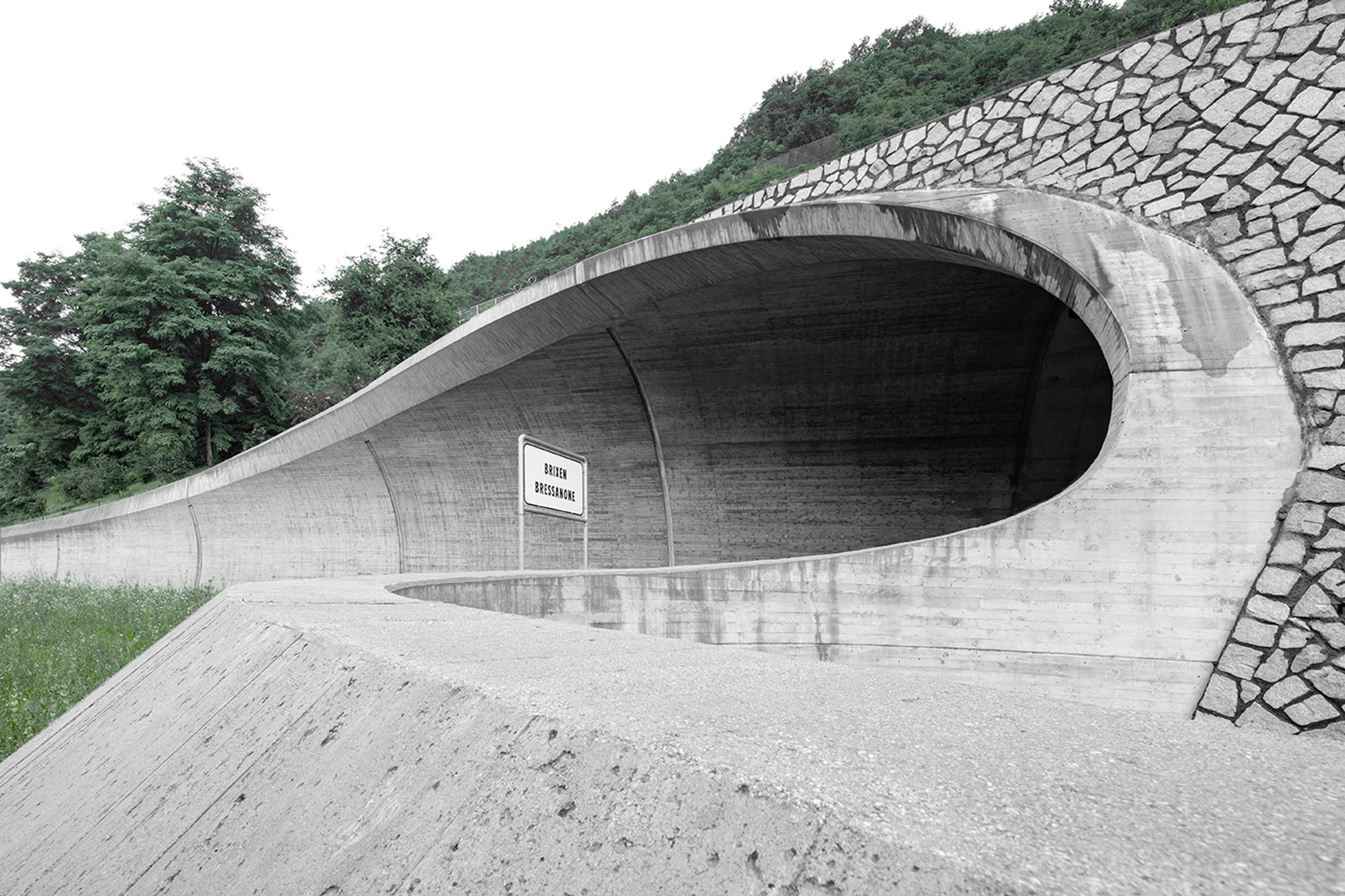 Here drivers can turn south towards Bolzano or north to Varna, both routes leading through their own tunnels with concrete mouths designed by MoDus Architects.

The concrete for these large, curving gateways is made from material excavated from another infrastructure project, the Brenner Base Tunnel that’s currently under construction between Austria and Italy.

MoDus Architects chose larch wood for the acoustic barriers and clad the chimneys that ventilate the tunnel with Corten steel.

Three of the portals are curved and one is more angular. Striations from the board-marked concrete have been left visible, acting as visual markers that outline the shape of the tunnel mouths. 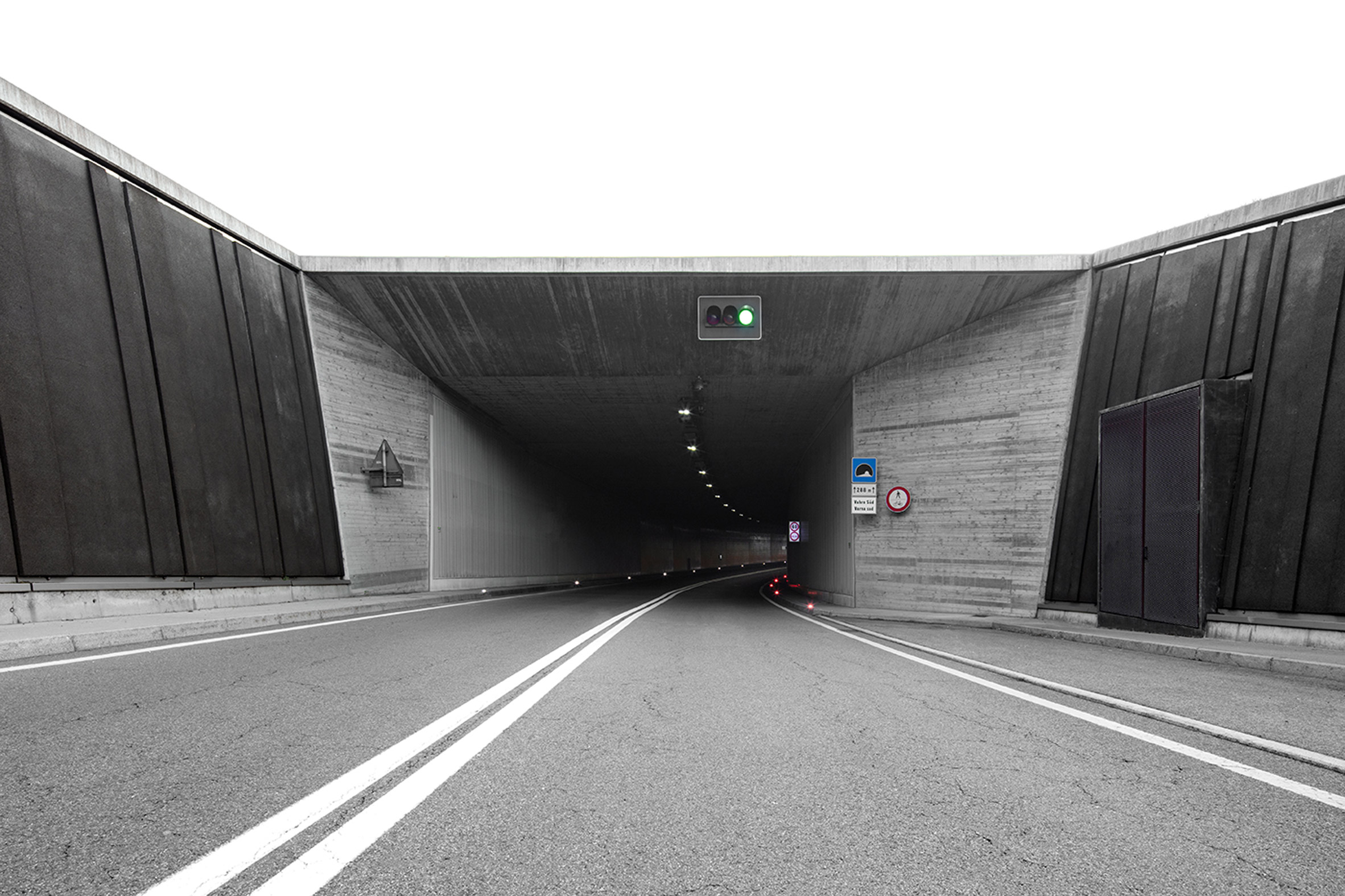 Rounded chimneys of weathering steel poke through the hillside, branching like trees.

The studio said they approached the project with the dual aim of minimising the visual impact of the infrastructure on the natural landscape and creating a unifying identity for Varna and Bressanone.

“The Ring Road project underlines the reciprocity of these disciplines as a singular design challenge, not just given the environmental and economic impact of these projects, but also as a model for small cities grappling with questions of mobility, heritage and place-making.” 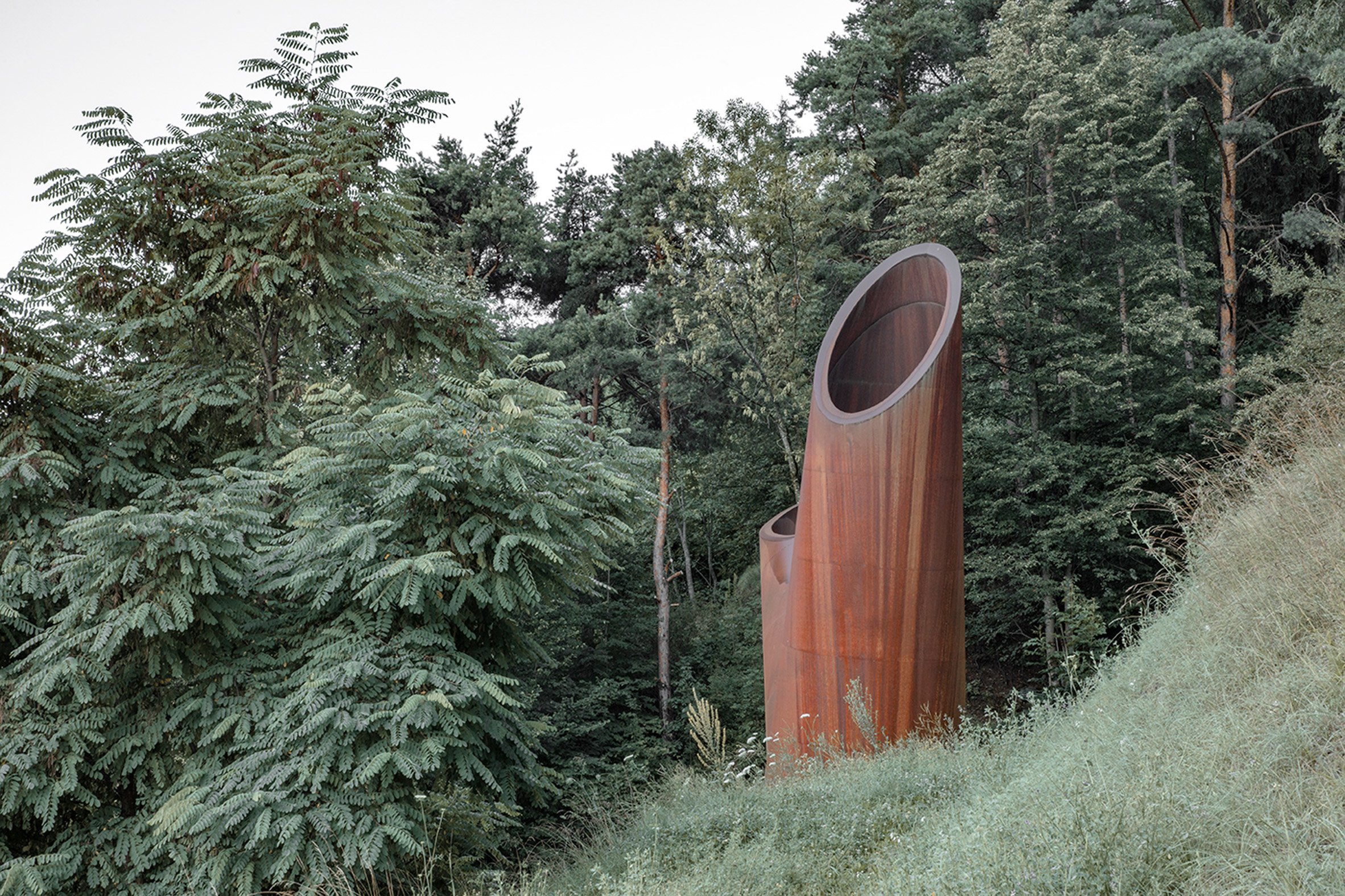 MoDus Architects imagined the portals as “expressive figures whose raised heads emerge from the buried, unseen networks” of the roads hidden in the hillsides.

The studio selected larch wood for the acoustic buffers that absorb the noise from the road as a low cost and environmentally friendly solution.

Designing the project so that it would be attractive to residents who live near the tunnel was as important as making an impression on motorists passing through, said MoDus Architects.

“The role architects play in large infrastructural projects has been increasingly marginalised over the past few decades in Italy,” said co-founder Matteo Scagnol. 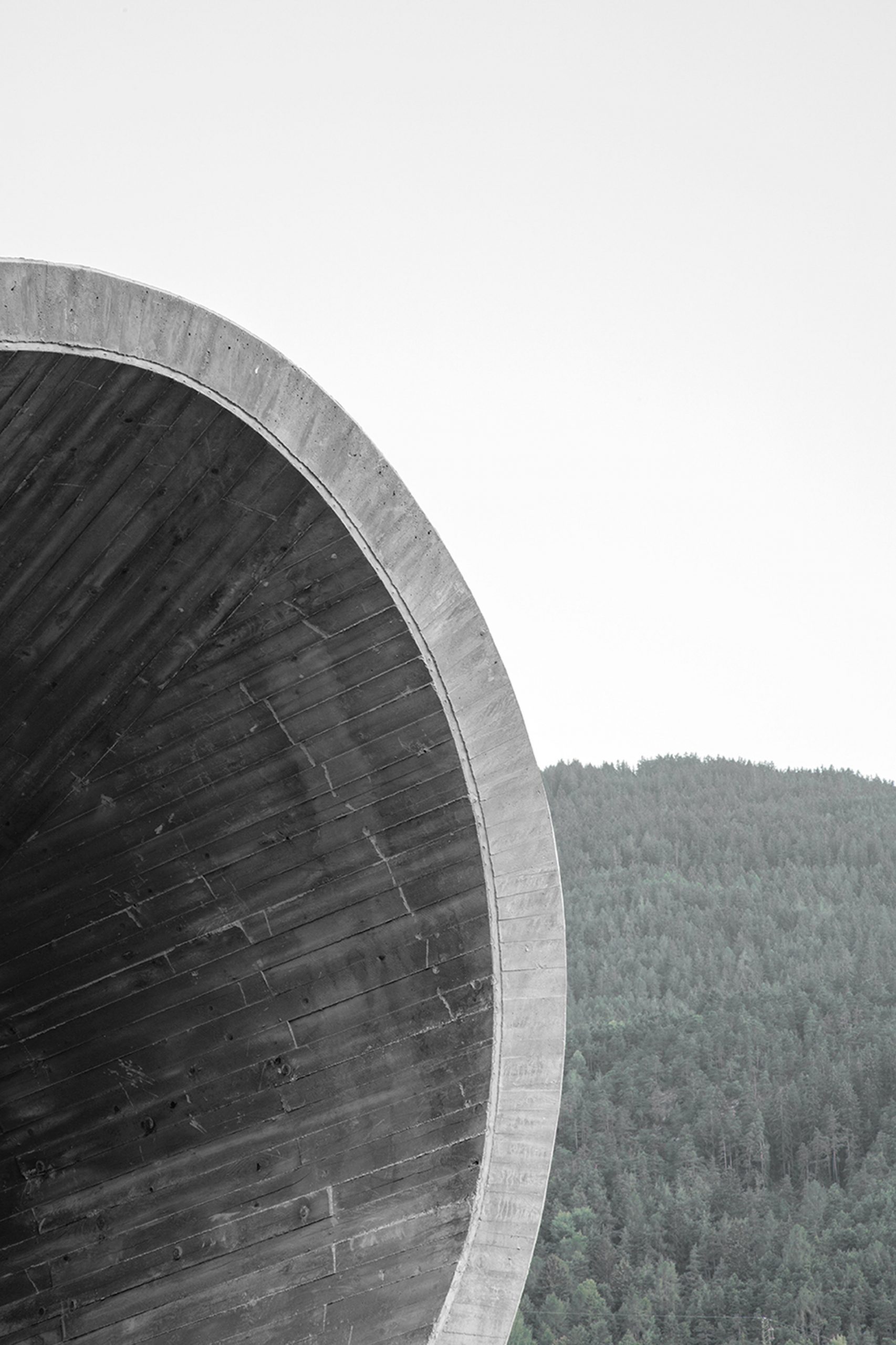 “The country’s remarkable density and stratification of historical and natural contexts present unique and pressing challenges that the public administration needs to address,” he explained.

“The Ring Road in South Tyrol is borne of deliberate, decision-making processes that comprehend the importance of design at every scale and as such created the conditions necessary for cross-disciplinary collaboration to occur.” 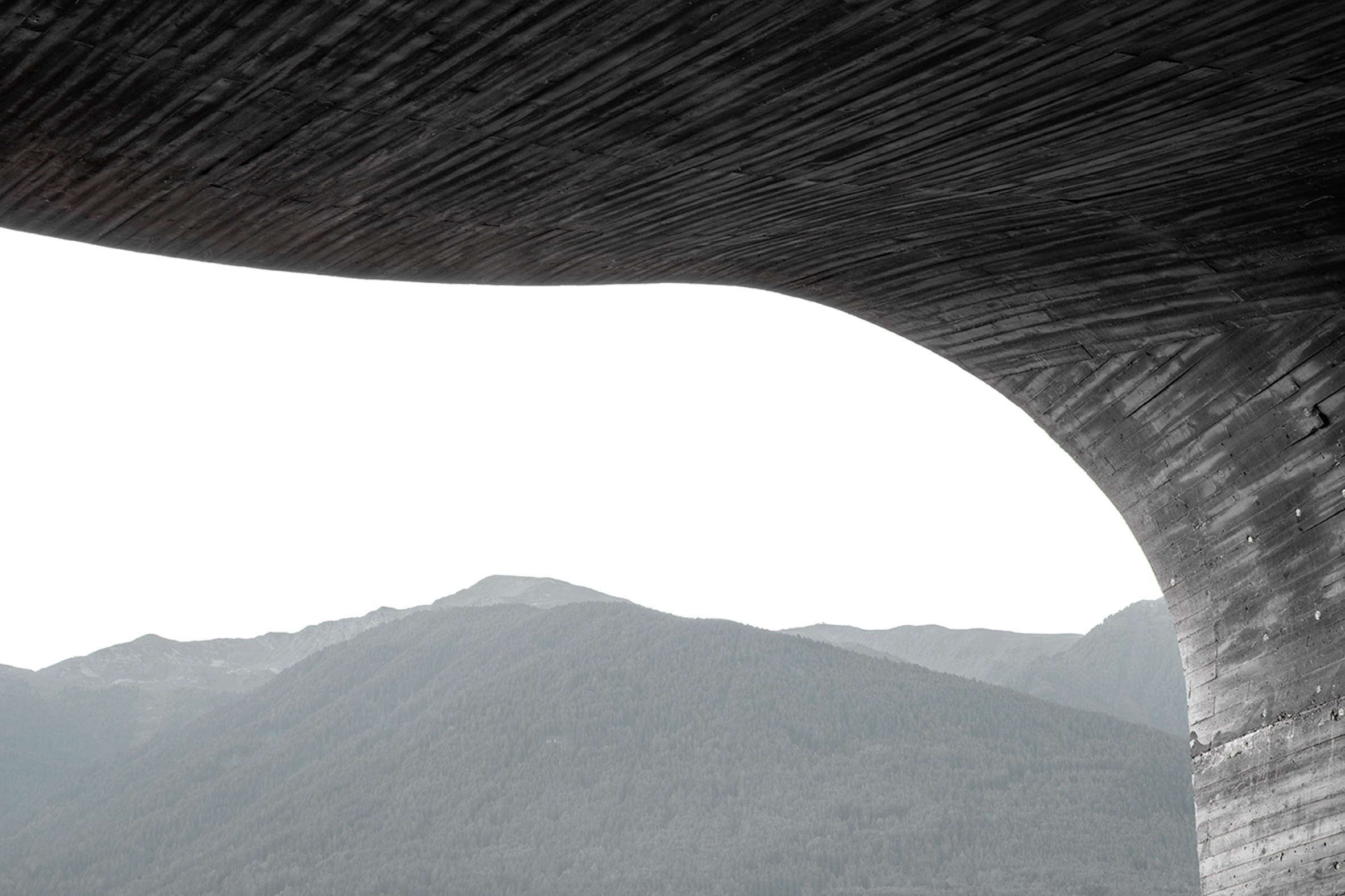 Construction began in 2017 and finished at the end of June 2020.  The next and final stage of the project is to extend the ring road five miles to Varna, and is due to complete in 2025.

MoDus Architects was founded in 2000 by Attia and Scagnol and is based in Italy. The practice has also designed a tourist information office for Bressone with curving concrete walls that wrap around a tree.

Photography is by Gustav Willeit unless otherwise stated.