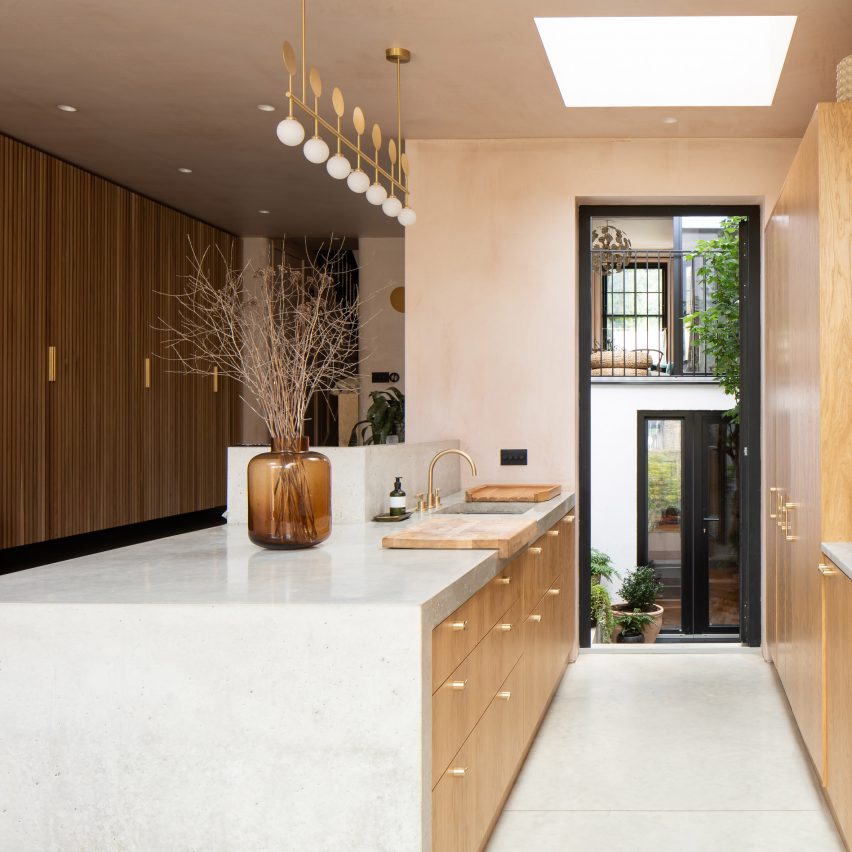 Architecture practice Fraher & Findlay has renovated and extended a home in east London, adding a small courtyard that offers glimpses of old and new parts of the property.

Tsubo House was originally built in Hackney during the Victorian era and over the years had come to look shabby and unloved.

The house’s current owners – the founders of Studio XAG – brought architecture practice Fraher & Findlay on board to carry out a complete overhaul. 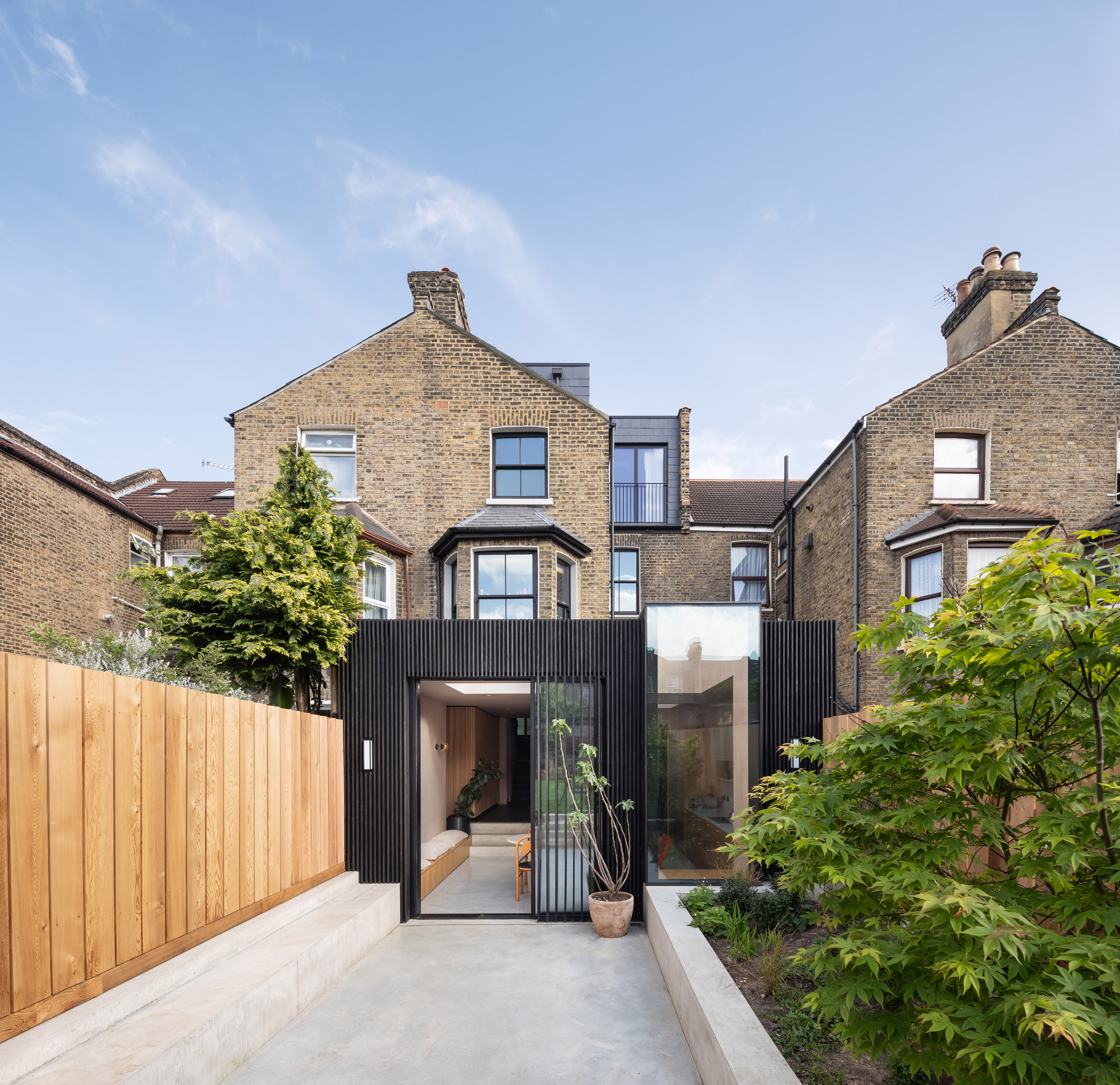 As part of the works, the Brockley-based practice constructed a spacious back-garden extension.

It was key for this new living space to feel closely connected to existing rooms in the home and not too distanced from the basement level, which is often utilised by visiting friends and family. 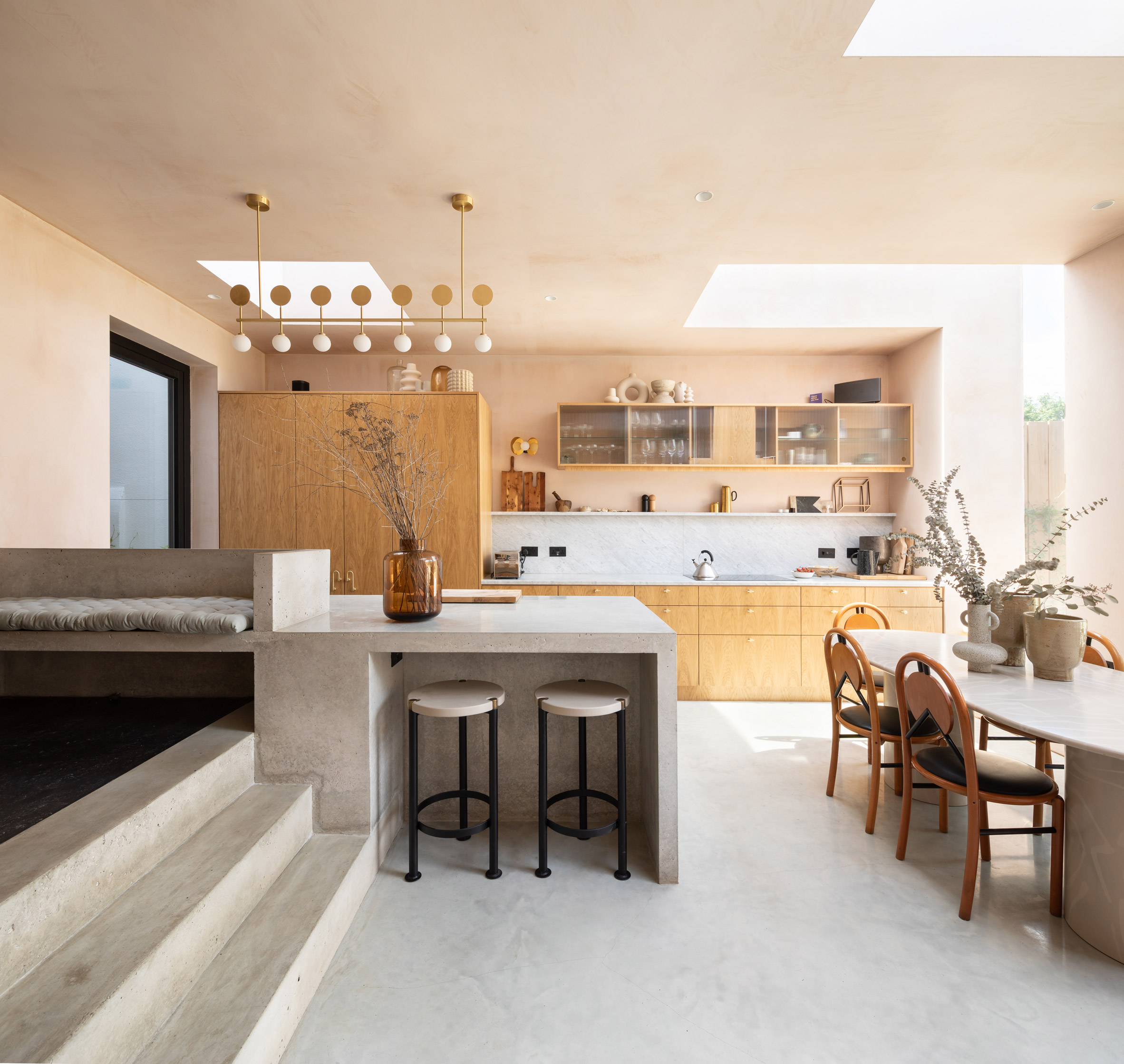 Fraher & Findlay decided to insert a small courtyard at ground level that would visually link together the new and existing parts of the home.

It draws upon tsubo-niwas – tiny interior courtyards that are incorporated into Japanese buildings to provide natural views and bring in additional sunlight.

The courtyards are traditionally the same size as a tsubo, a Japanese measuring unit of 3.3 square metres that’s roughly equivalent to the area of two tatami mats. 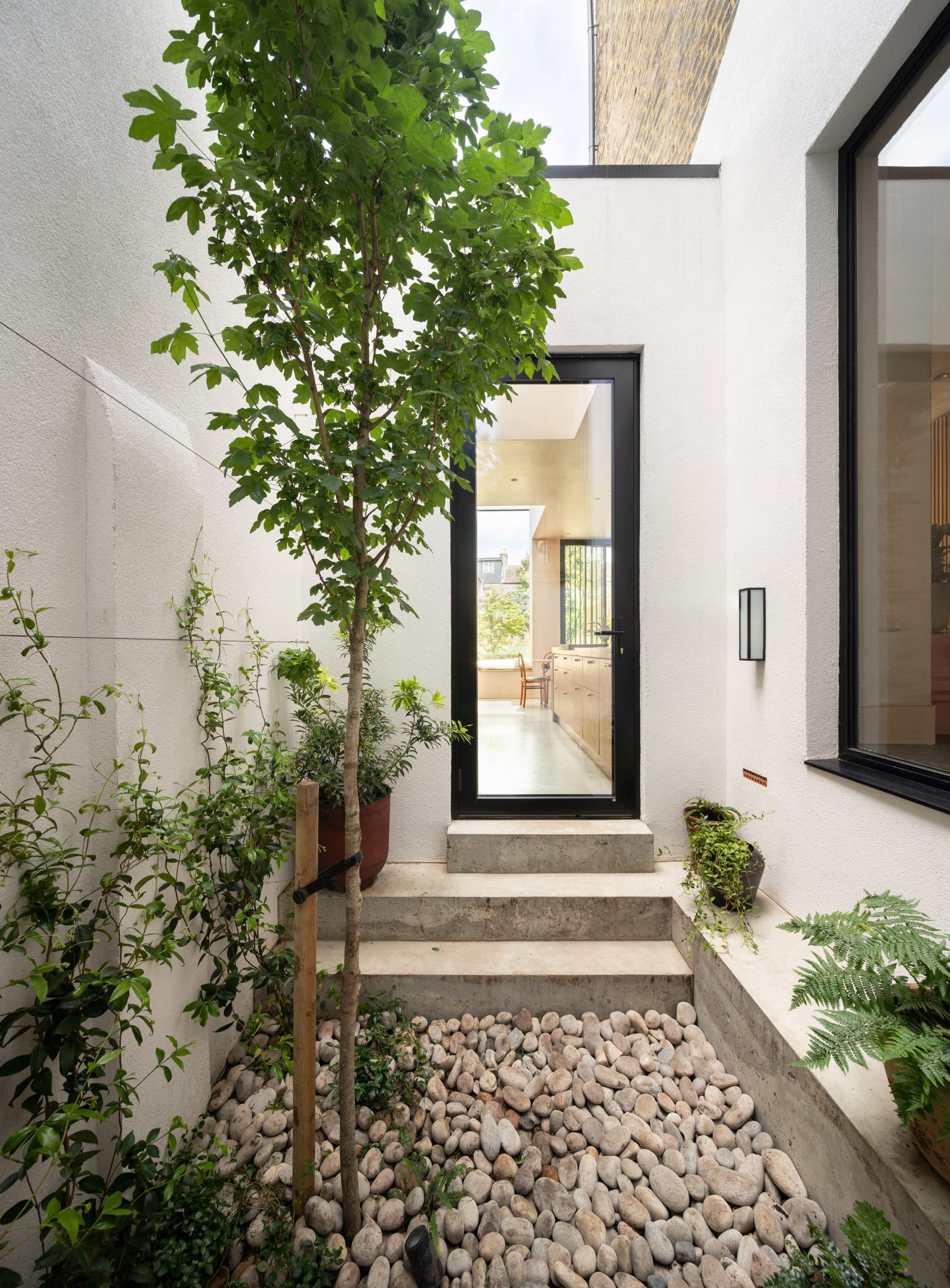 “We wanted an external environment to act as a pivot point between the spaces, whilst acting as an environmental tool to bring in lots of natural light and to aid natural ventilation,” said the practice.

“It feels like a quiet force, providing life energy to the house.  it is visible from all the rooms in the house with the exception of two bedrooms and one bathroom.” 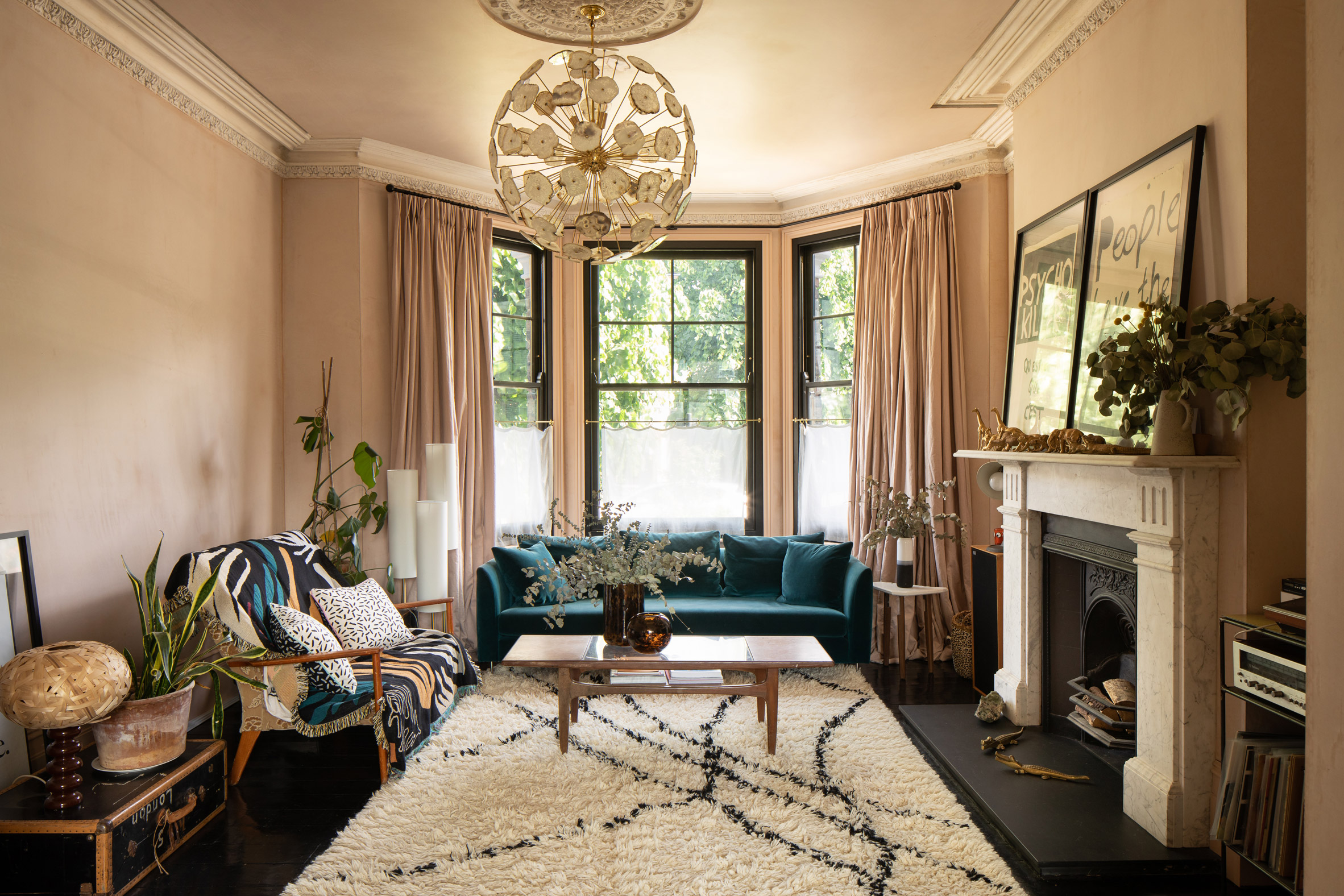 The pebbled courtyard is centred by a tree and has an array of potted plants running around its periphery. Leafy climbing plants also wind up its rear wall.

One window of the courtyard looks through to the older front section of Tsubo House, while the another has views of the new rear extension that accommodates a kitchen and dining area. 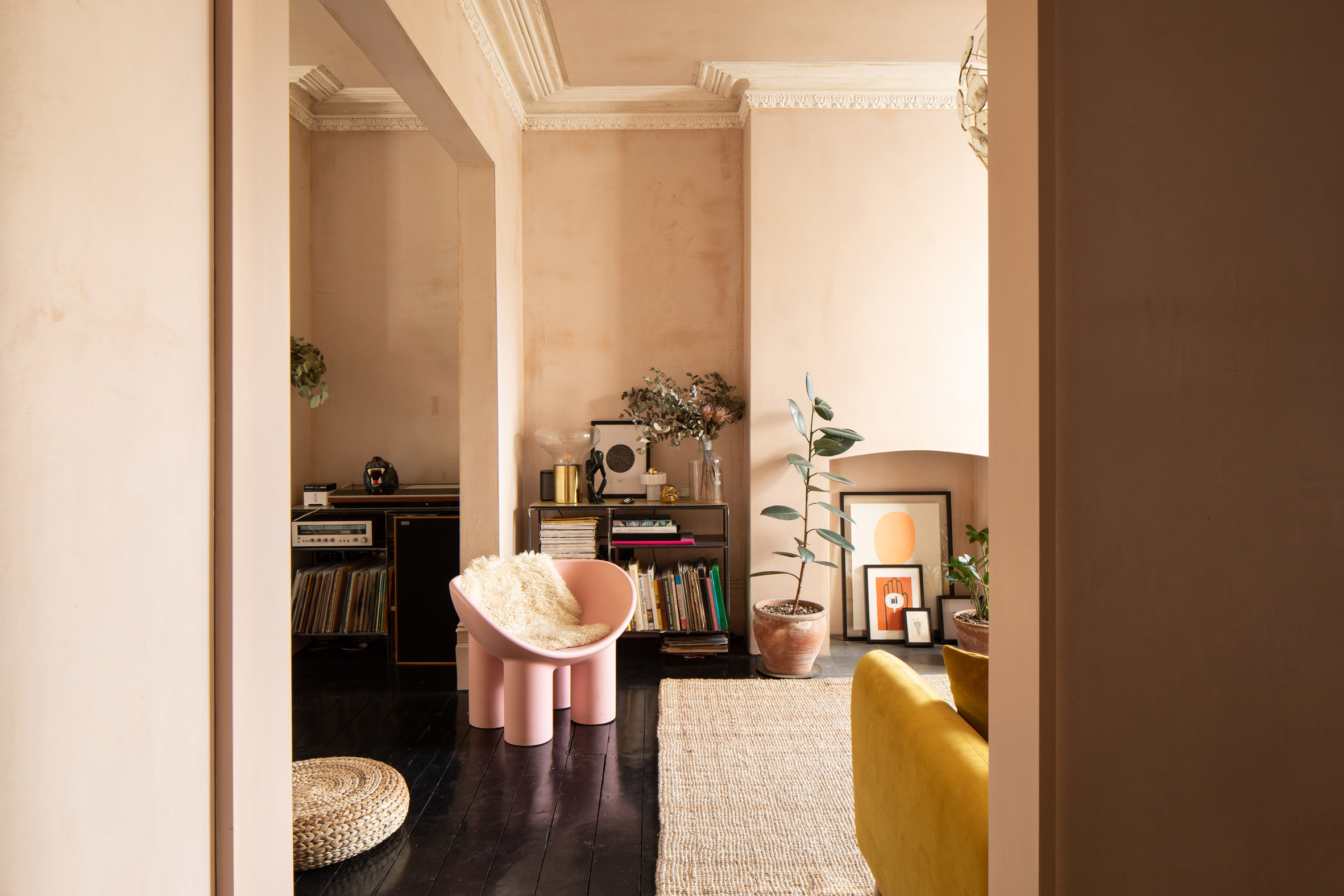 Designed to feel “textured, calm and lived in”, the kitchen has been finished with pink raw-plaster walls and timber joinery. Some of the brass light fixtures were also sourced second-hand from eBay, complementing the curved brass handles on the cupboards.

The extension has a slatted black-timber facade and a green roof, which the studio introduced so that, when viewed from the baby’s nursery upstairs, this part of the home would look as if it’s wearing a “hairy hat”.

Flooring of the extension was also made lower than the rest of the home, as a mid-way between the ground and basement levels. 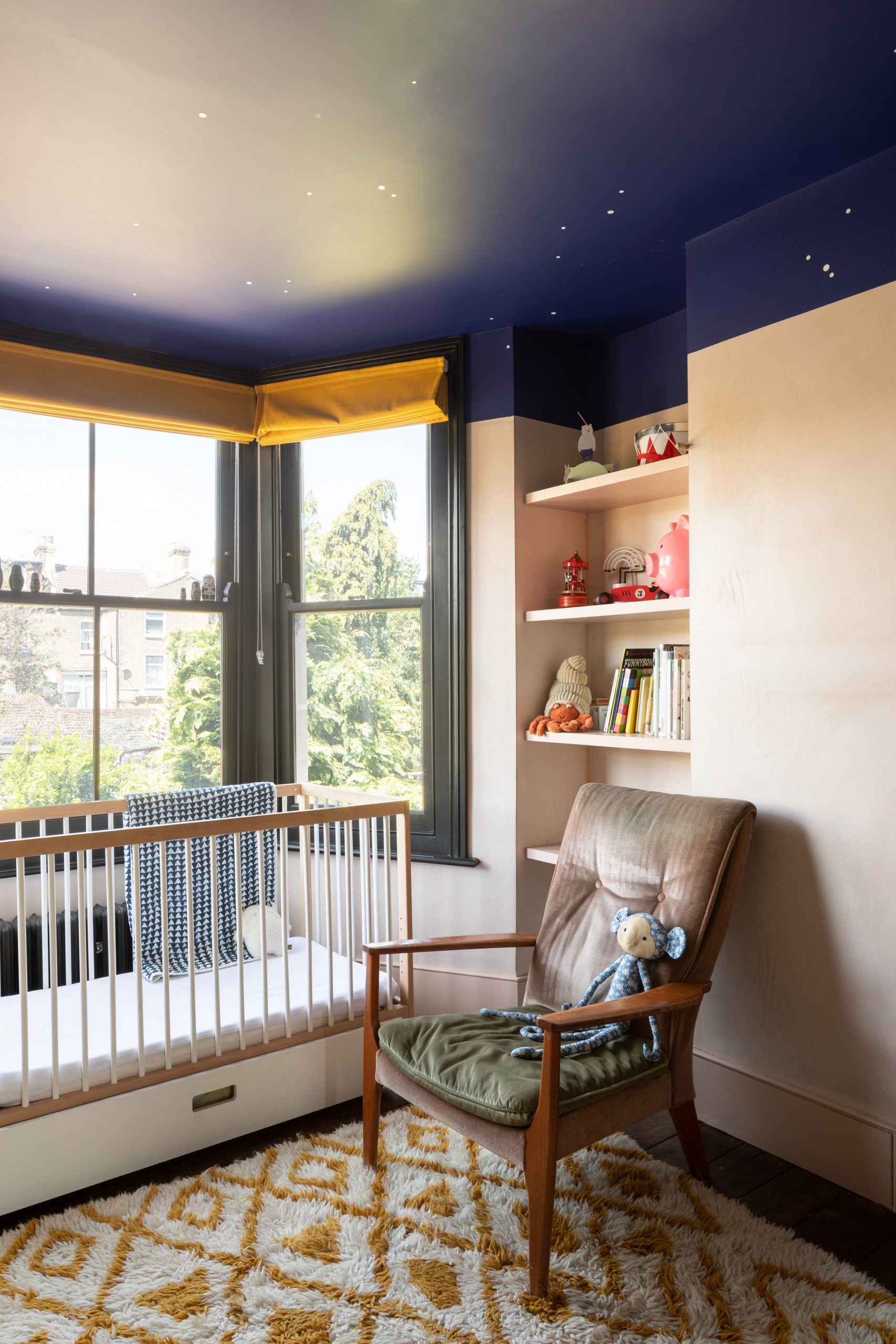 Plaster surfaces continue through into the home’s living room, which the practice has updated to match the owners’ creative personalities. It’s dressed with velvet furnishings, shaggy rugs and a bubblegum-pink edition of Faye Toogood’s Roly-Poly chair.

Decades-old paintwork has also been stripped back from the ornate cornices, ceiling roses and skirting boards. 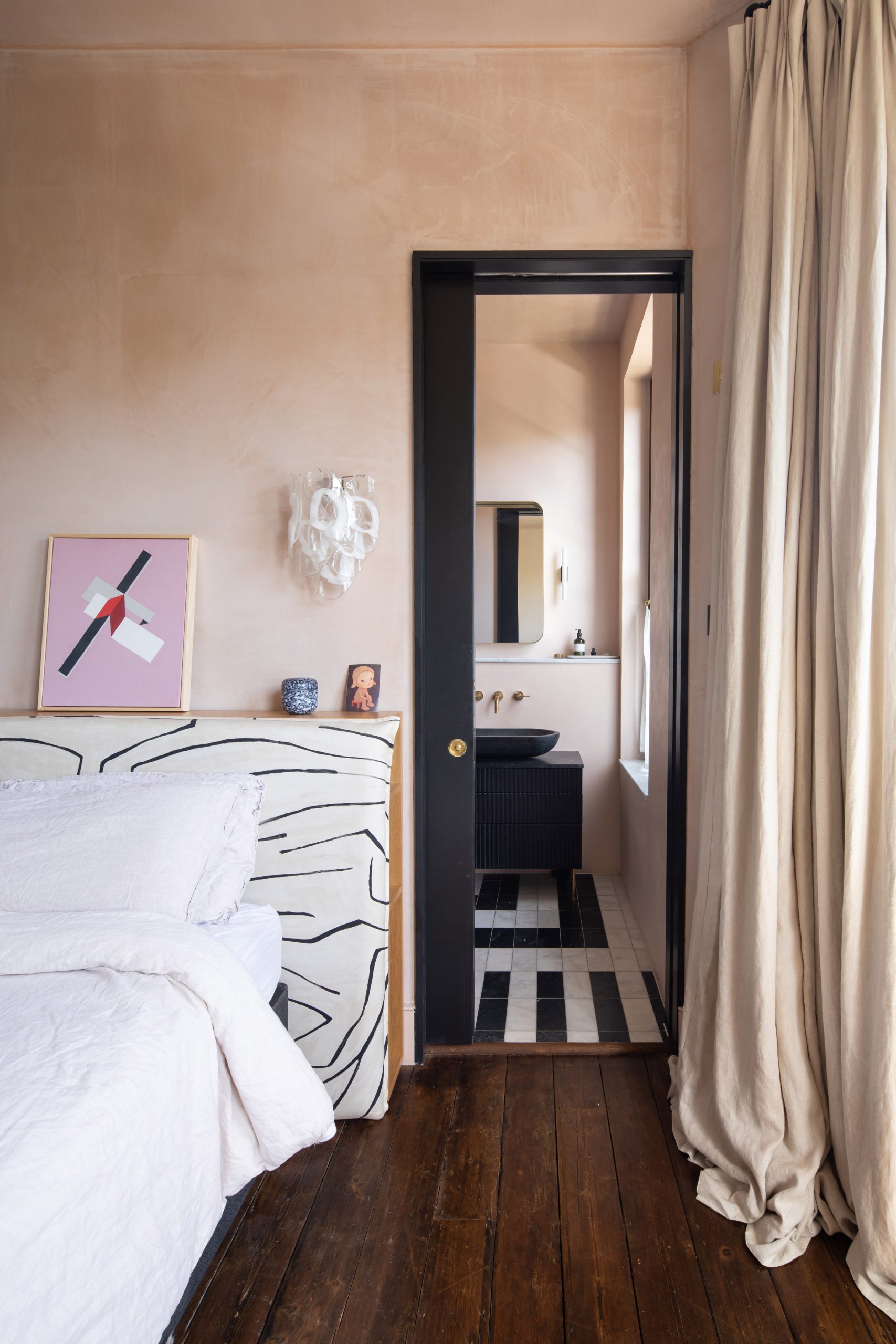 More quirky features appear upstairs – the nursery, for example, has a midnight blue ceiling speckled with stars, and all of the bathrooms feature graphic monochromatic tiled floors. One even includes its own fireplace and a freestanding jet-black tub. 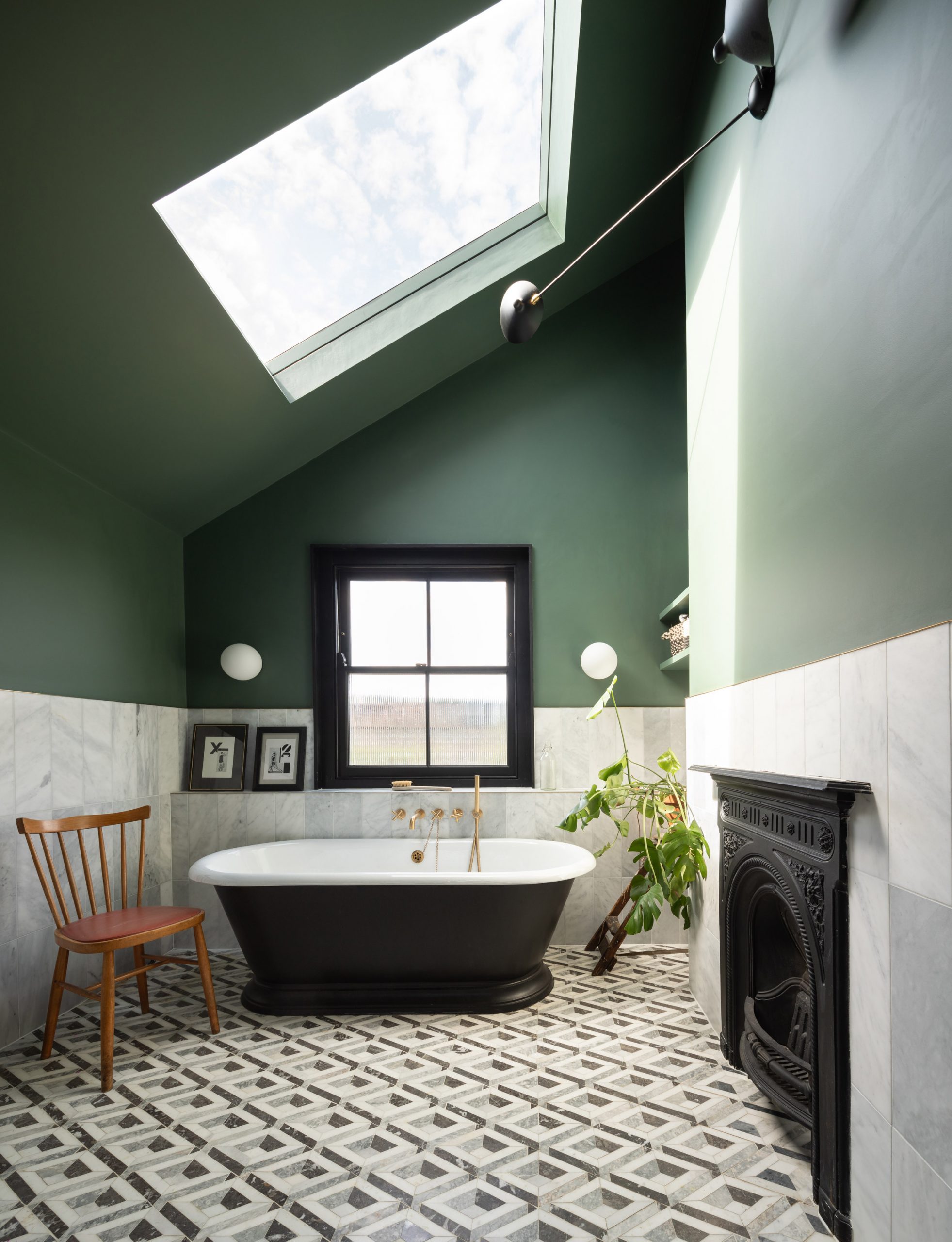 Fraher & Finlay was established in 2009. The practice has previously created a wildflower-topped extension and renovated a home to feature traces of its original architecture.

Photography is by Adam Scott.