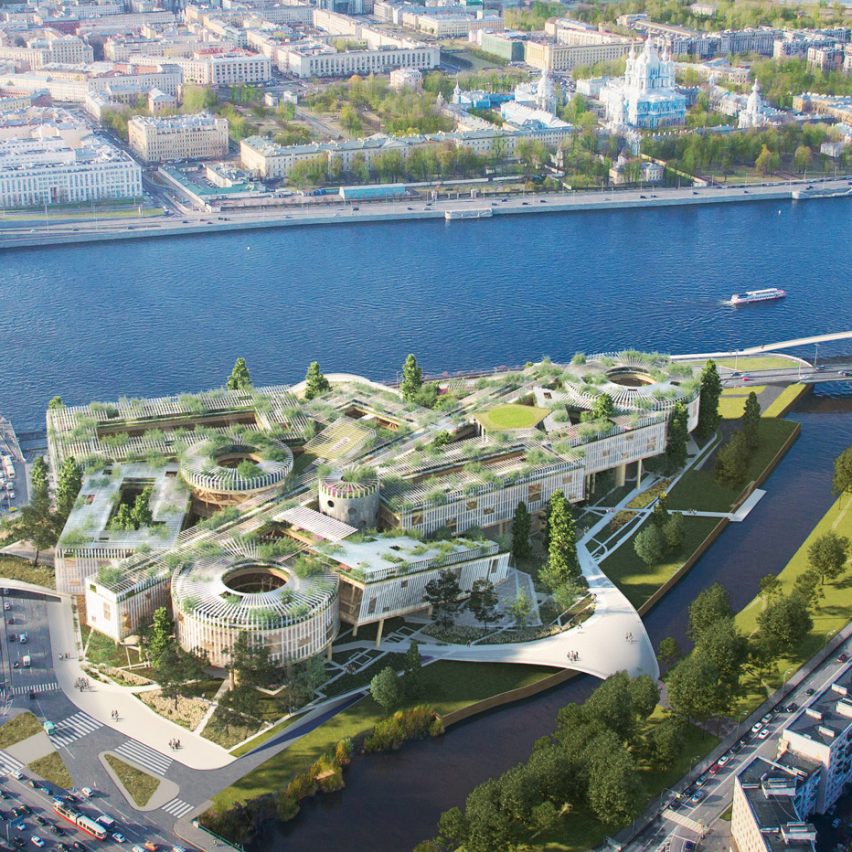 MVRDV’s proposal, which would have been the world’s largest timber building, came second in an international competition for the company’s new base in Saint Petersburg earlier this year.

“For instance, with the Gazprom building, we were in the end second, after a lot of discussions,” Maas said in a live interview with Dezeen last month. “Our building was on purpose for Gazprom in wood to reduce [carbon emissions] in Saint Petersburg.”

The Dutch architecture studio made the decision to enter the competition for Gazprom after internal discussions over the merits of working for a client that is a heavy polluter.

“After considerable debate as to whether MVRDV should engage with one of the top-three producers of global carbon emissions, MVRDV decided to uphold our dedication to sustainable design,” Maas said at the time.

MVRDV’s design for Gazprom Neft’s headquarters would have been the world’s largest timber building. The office block would have been raised above a park on a “forest” of 119 wooden columns.

However, the company, which is the oil arm of Russian energy company Gazprom, rejected the design in favour of a proposal from Japanese architecture studio Nikken Sekkei.

“I think the first floating wooden headquarter building would have been made,”  said Maas. “That’s a pity. You push, you pull back, you don’t reach it.”

During the interview with Dezeen, which was live-streamed as part of Virtual Design Festival, the architect presented ideas for more sustainable cities including a concept called the “Green Dip”, where large amounts of greenery would be introduced into cities.

“I think it would be good to dip our planet in green,” he said, “to somehow transform places like Hong Kong into a green dream.”

However, Maas admitted it was difficult to get clients to agree to commission more environmentally friendly projects.

“It’s hard to convince clients,” Maas said n when challenged about his firm’s use of unsustainable materials such as concrete. “In the end, we lose.”

Maas’ admission comes as architecture studios wrestle with the challenge of living up to their sustainable ideals.

This month, UK studio Foster + Partners was widely criticised for designing a new airport in Saudi Arabia despite being a founding signatory of climate-change movement Architects Declare.

Although Architects Declare refused to “name and shame” the architecture studio over its plans, Foster + Partners faced calls to withdraw from the airport project over environmental concerns.

In an open letter to the studio, climate activist group Architects Climate Action Network wrote: “Our network strongly believes that UK architecture practices should not be working to expand aviation in the midst of this climate emergence.”

“The building would be built with or without us”

“Questioning whether or not to engage with one of the top three producers of global emissions, MVRDV discussed that the building would be built with or without us,” Knikker wrote.

“We, therefore, decided to follow a radical and uncompromising path to create the most sustainable building possible: the world’s largest timber building, a CO2 storage deposit that would not consume any fossil energy.”

Timber could be “concrete of the future”

Other architects exploring the potential of timber architecture include Dutch architect Marco Vermeulen, who believes his country could build a million new wooden homes to solve its housing crisis and capture 100 megatons of carbon at the same time.

Vermuelen, who built a temporary timber pavilion at Dutch Design Week last year to showcase the material’s potential, described wood as “the concrete of the future”.