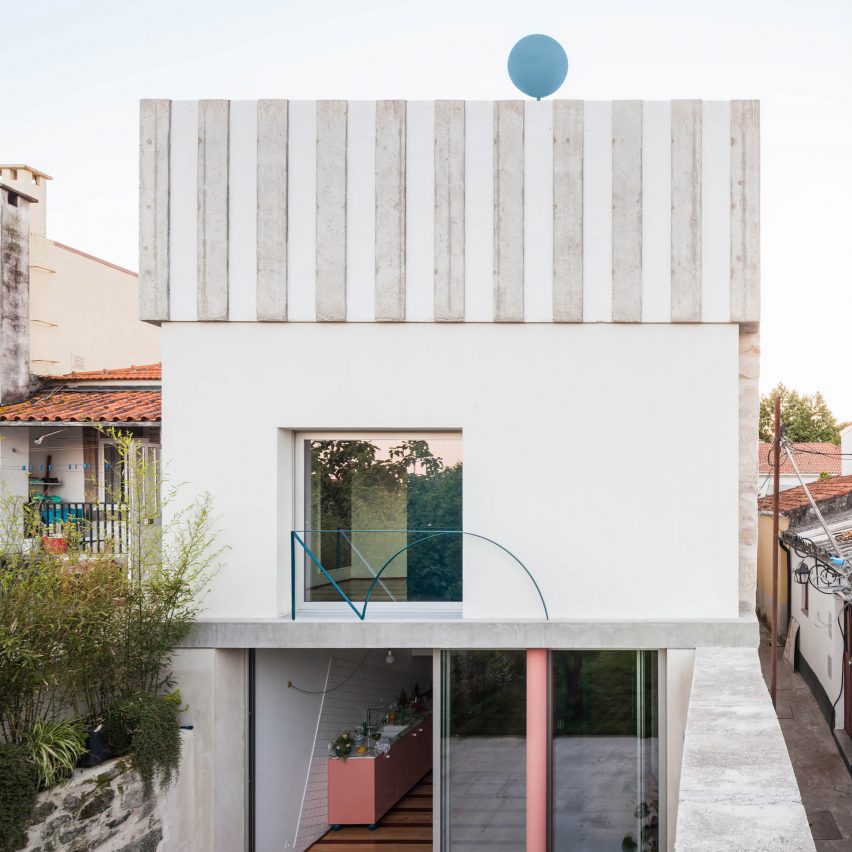 House in Fontaínhas by architecture studio Fala Atelier is a home in Porto, Portugal, featuring a striped concrete roof accented with pops of sugar-pink and powder blue.

The project involved the renovation of an old and abandoned 18th-century townhouse. To cope with the constraints of the site, Fala Atelier added skylights and sliding doors to let natural light into its narrow and deep plan. 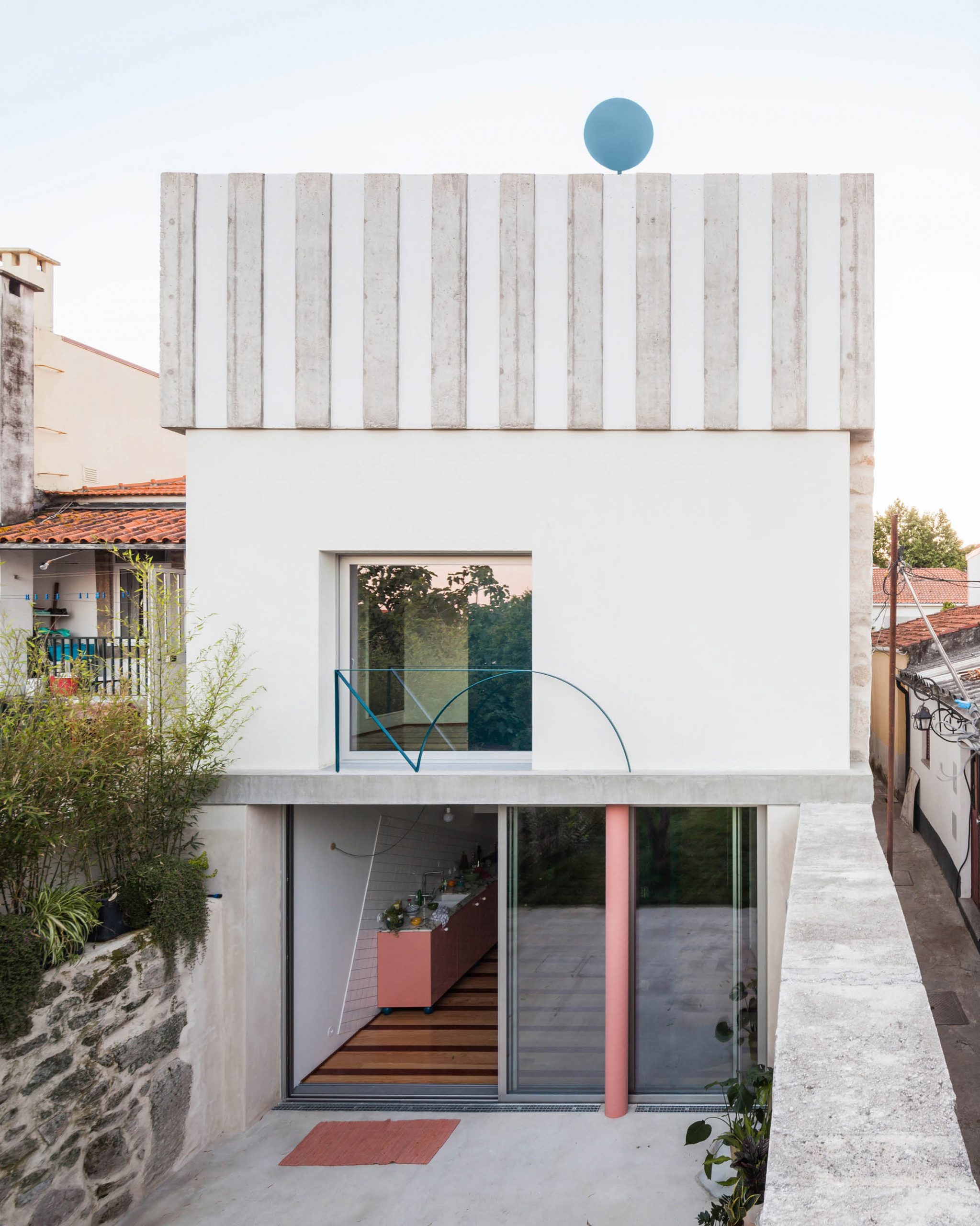 The rooms are all orientated to make the most of the green space behind it, while the facade detailing adds a fun geometry to House in Fontaínhas. 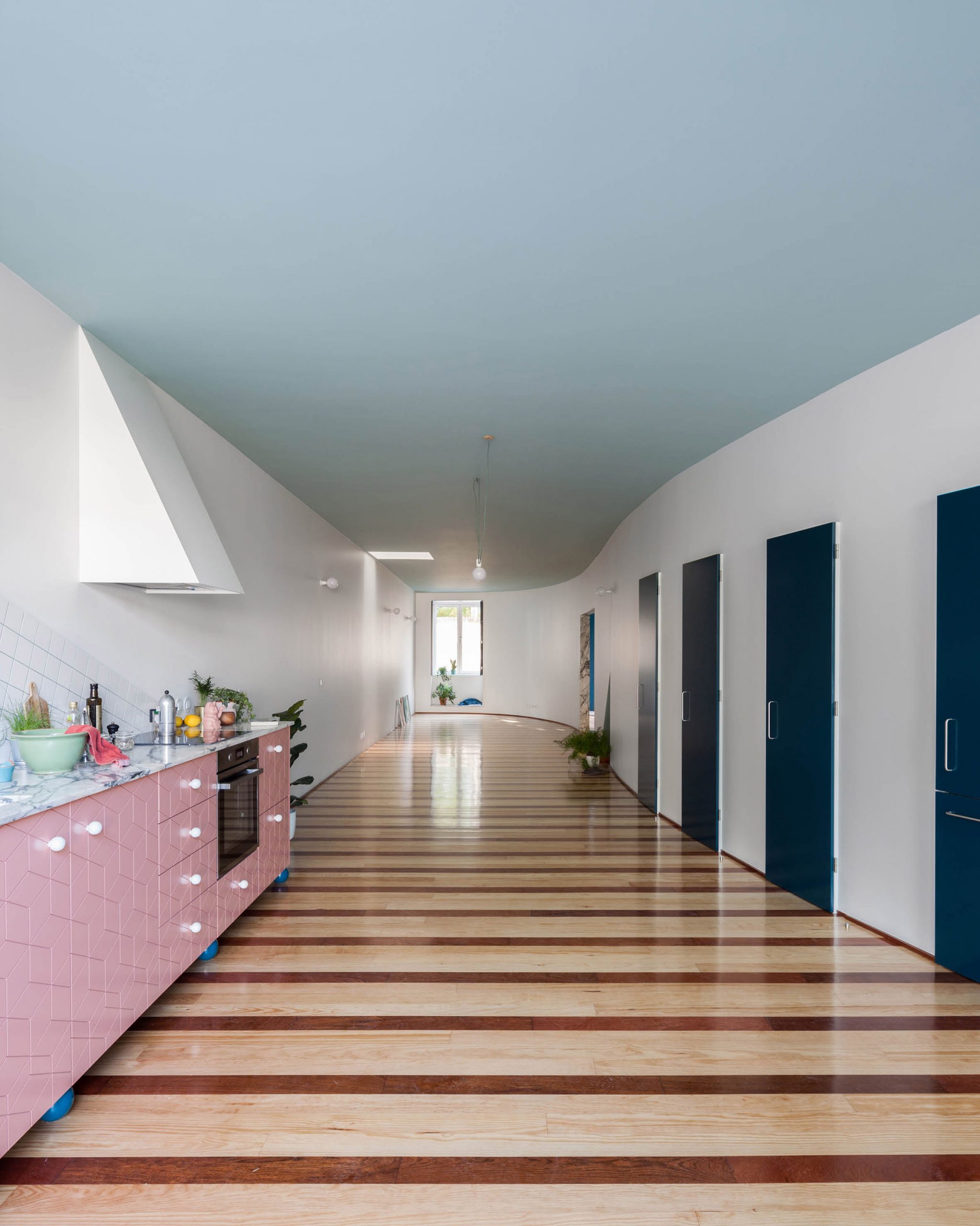 “The ground floor is completely open to the garden, while on the first floor a single window frames a certain perspective of the dense context,” said Fala Atelier.

“The striped concrete cornice is introduced on both elevations and a blue circle, aligned with an unnecessary pink column, ends the peculiar composition.” 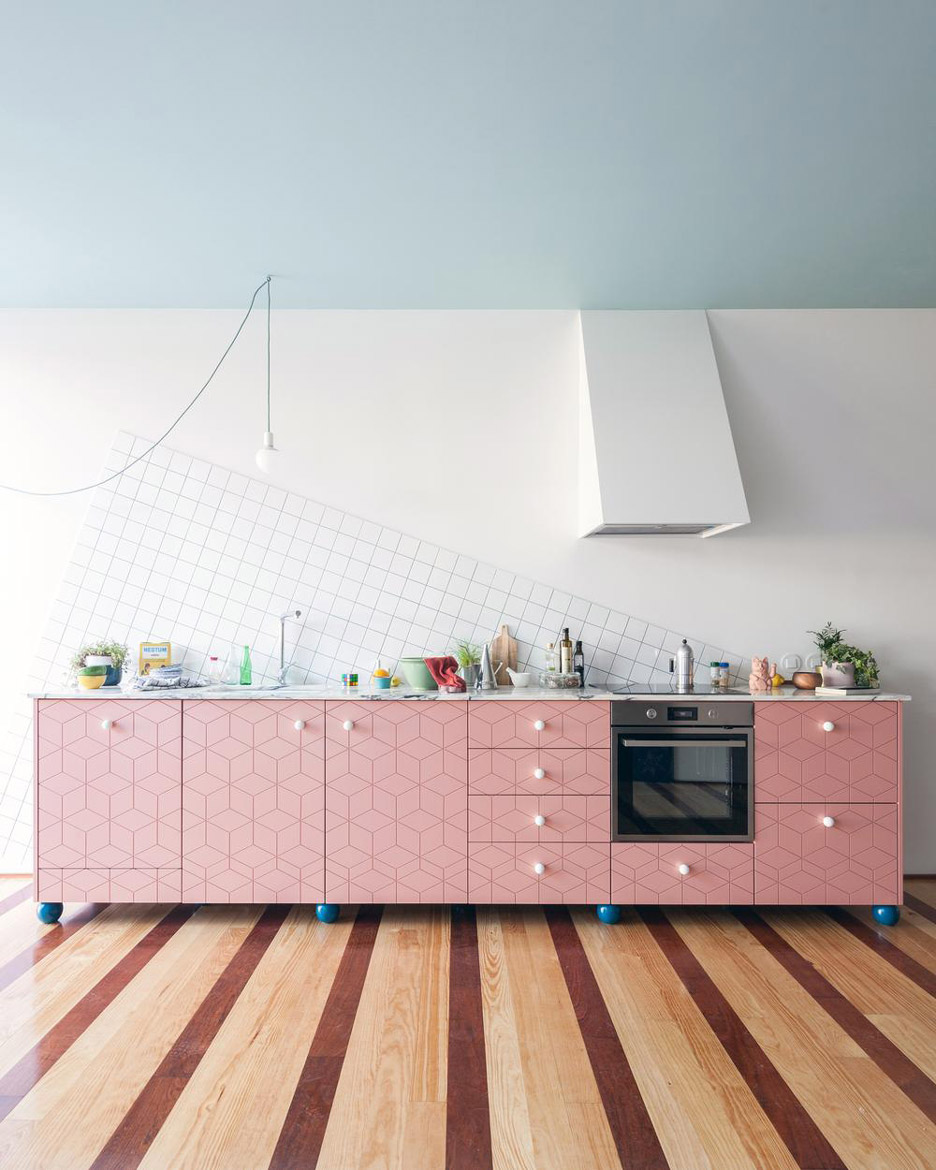 The upstairs window forms a slim balconette with an asymmetrical thin blue railing, bent to form a triangle and a half-circle shape against the exposed concrete plinth.

This railing meets the top of the decorative pink column. A matching blue railing appears on the house’s internal staircase. 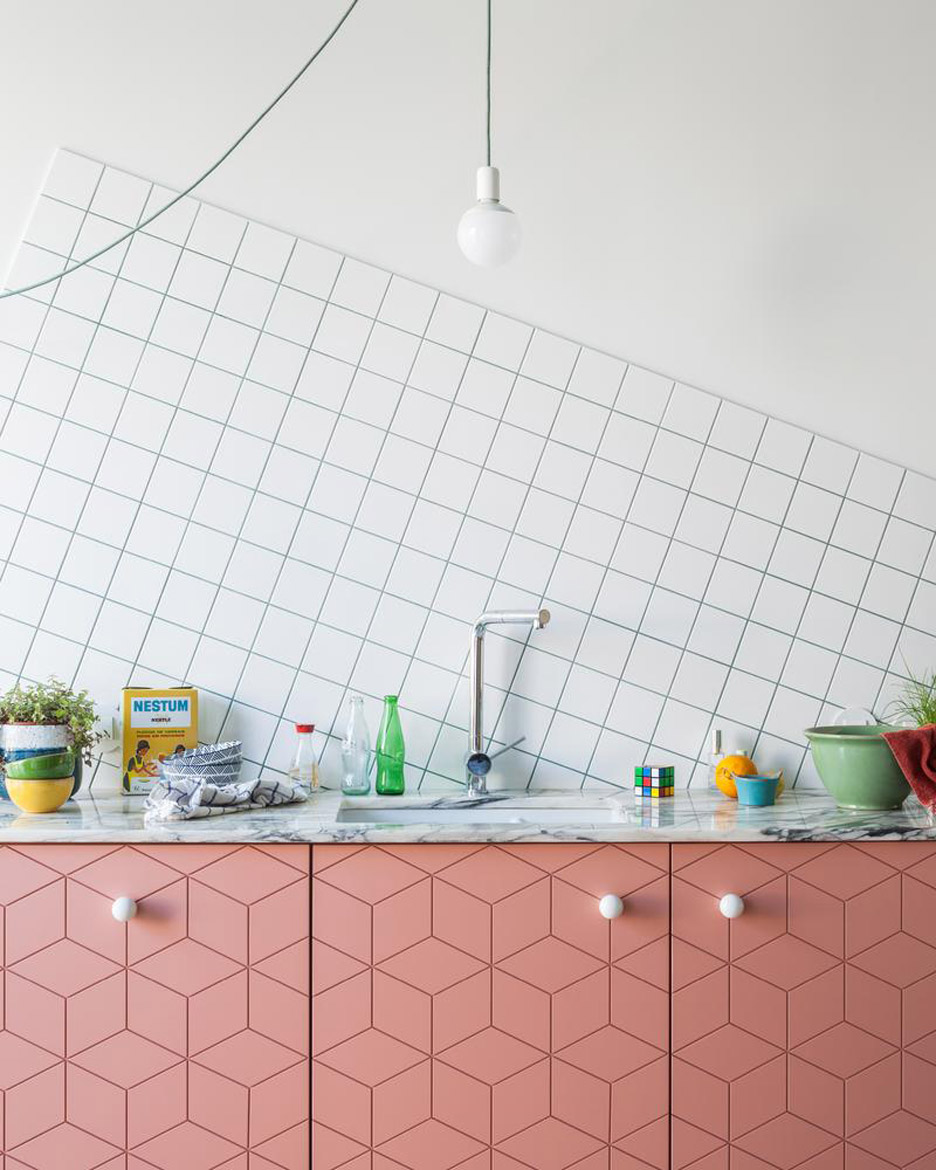 On the ground floor, the space is mainly open plan with sliding glass doors running the width of the house that open out onto the garden.

A gently curving wall runs down one side of this living space, separating the staircase and carving out rooms for the downstairs bathroom and storage. 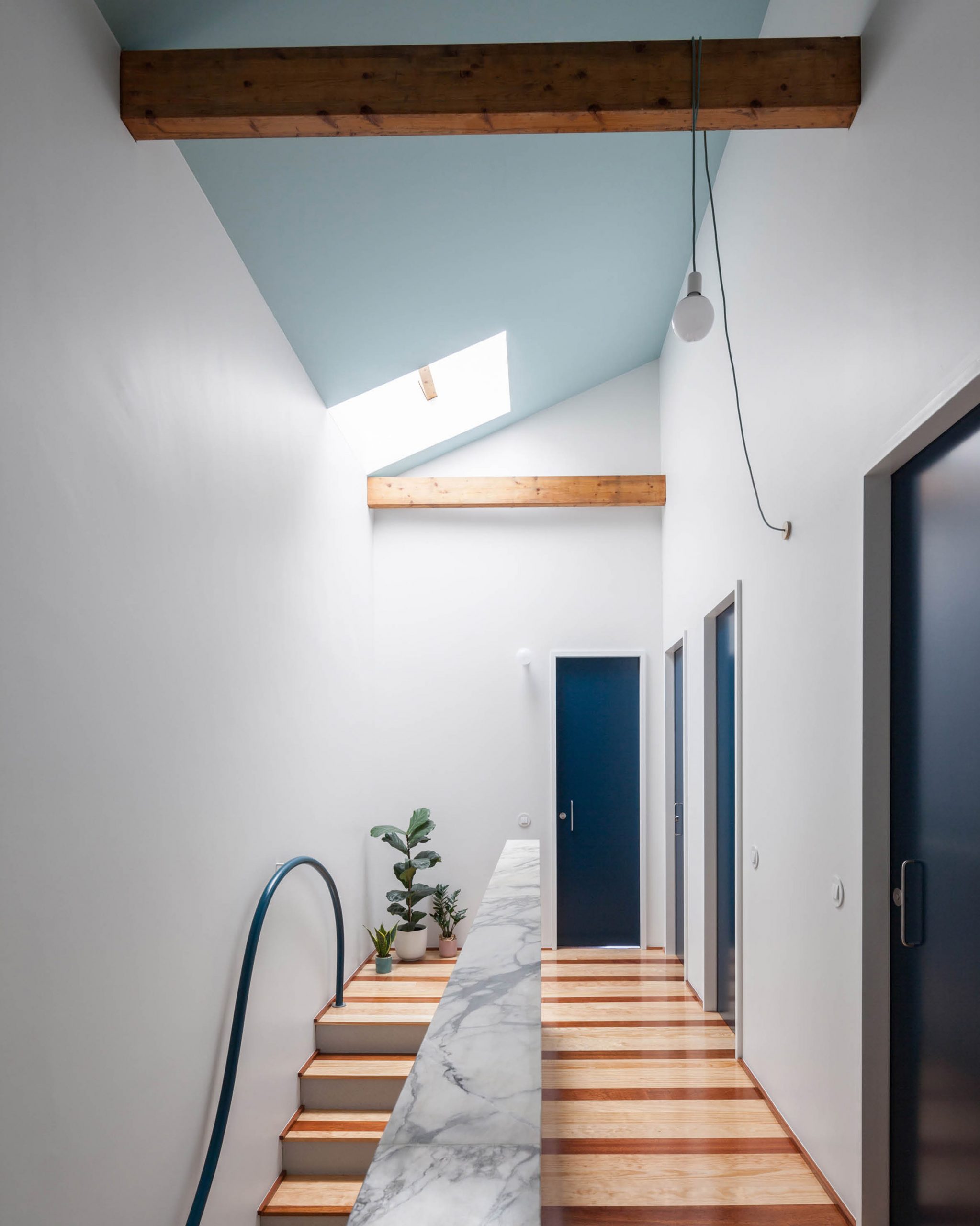 Upstairs, a corridor lined with blue doors leads to the bedrooms, the playroom and two bathrooms. These bathrooms have been created by drawing a diagonal line through a rectangular plan to divide it into two.

Another curved wall defines the boundary between a bedroom and an upstairs living space that can be used as a playroom. 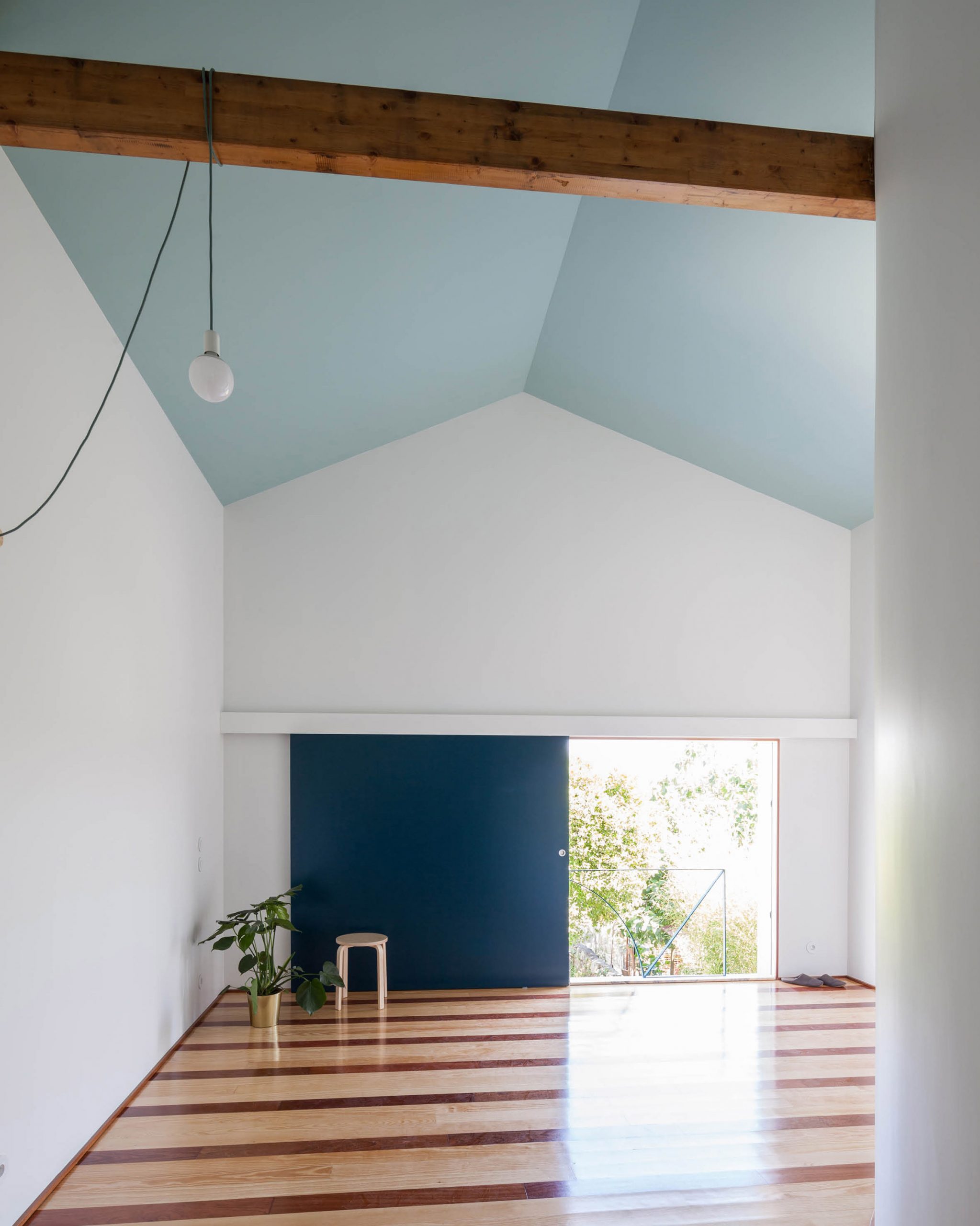 To unify the “different geometries” of the interior spaces, Fala Atelier used a constant aesthetic to tie House in Fontaínhas together.

“In contrast with the opposing spatial orders, materiality holds the house together,” said the studio.

“Fluent white walls are stuck between striped-wooden floors and light blue ceilings, disturbed once in a while by flat blue doors, touches of marble or a pink kitchen.” 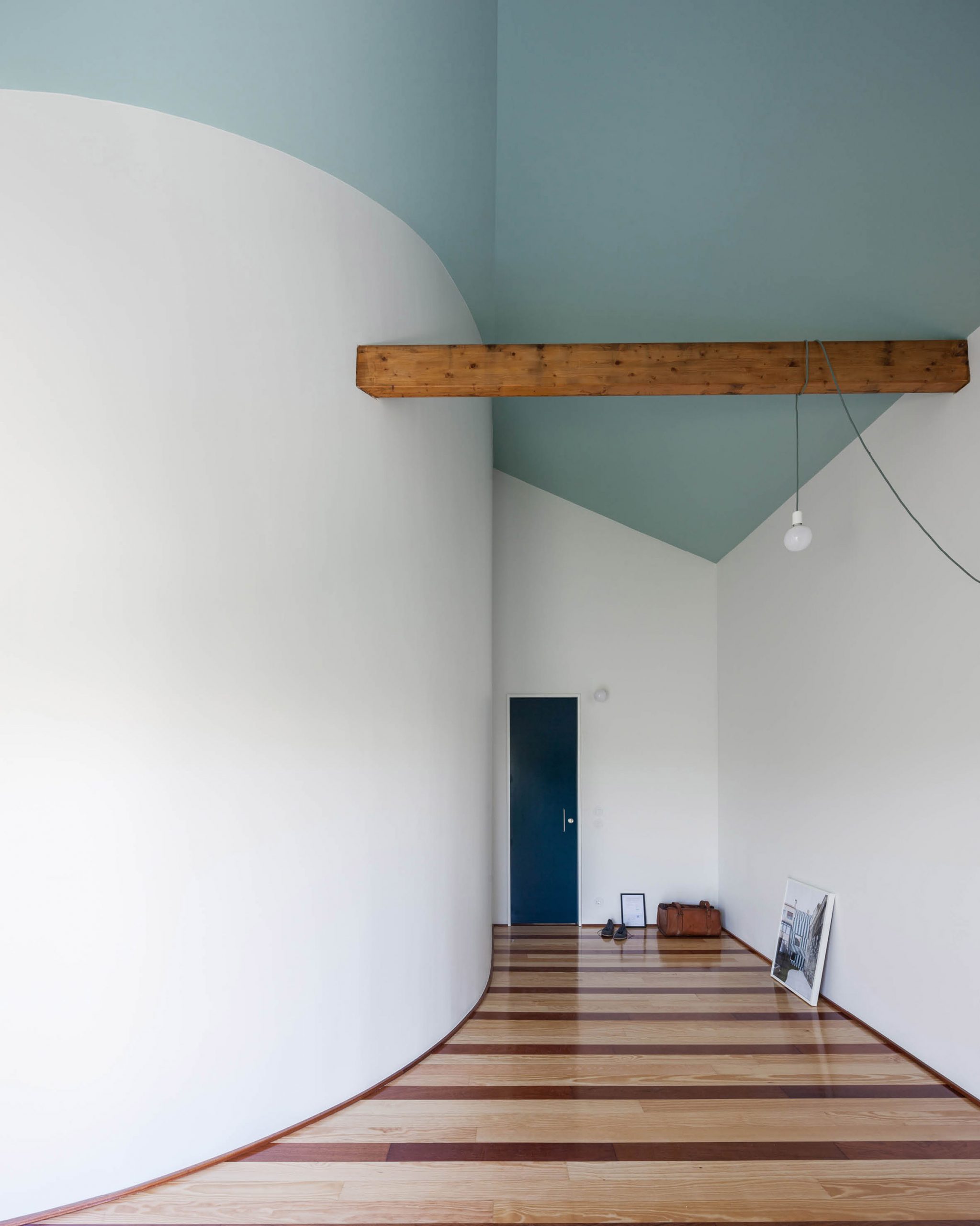 This kitchen is formed by a row of marble-topped counters with pink doors featuring a hexagonal pattern and large white, rounded knobs.

The splashback is formed by white tiles cut to form a diagonal line that forms a geometric shape that contrasts with the stripey floors. 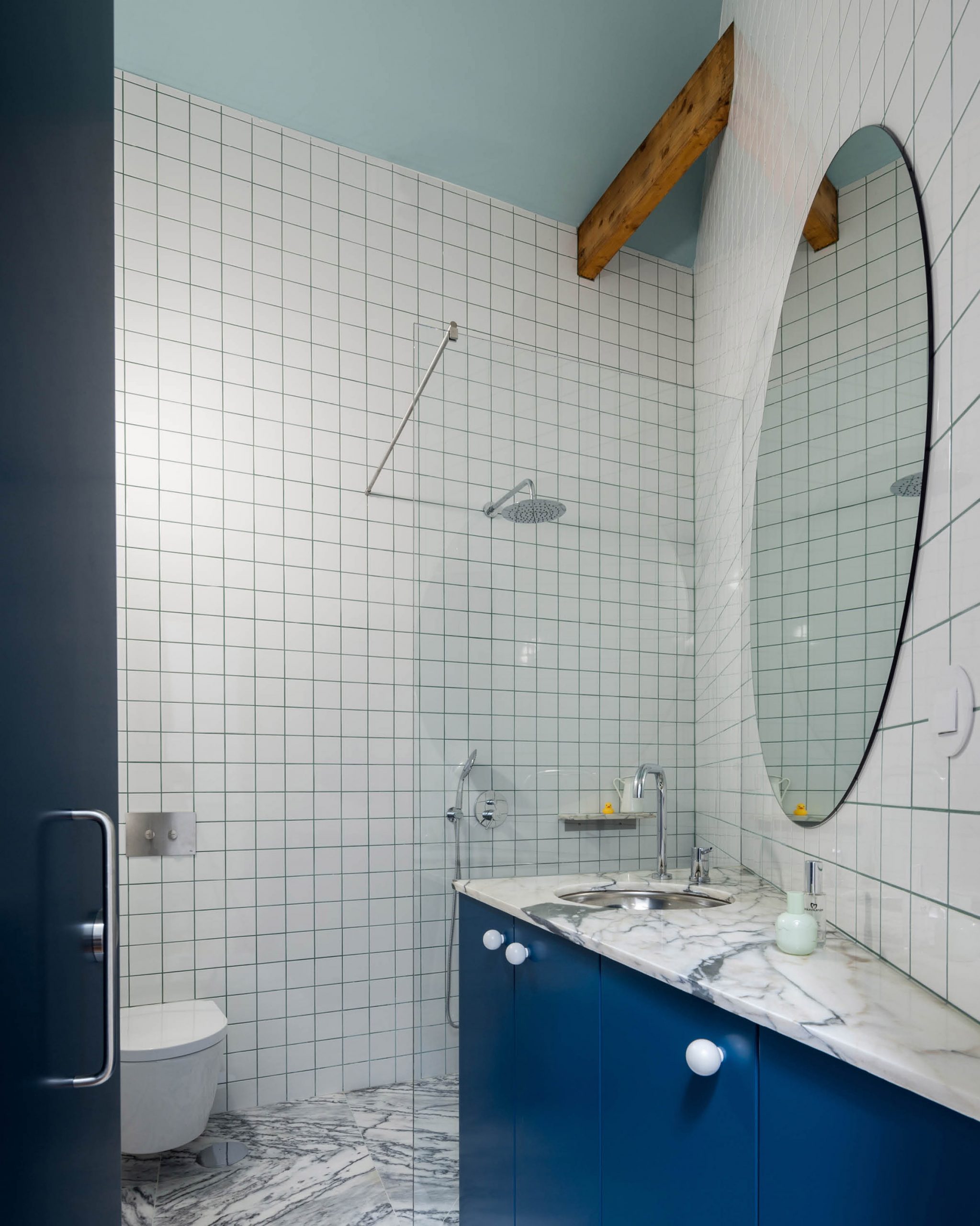 A pendant lamp with an exposed wire hangs over this kitchen area. Opposite, a line of blue doors lead to the bathroom and various cupboards.

Towards the front of the house, the wall curves around to create a front hallway and a staircase. The deep doorway is lined with more marble.

These materials continue upstairs, where the floors are matching striped light and dark timber. All of the ceilings in House in Fontaínhas are the same powder blue as the ball on the roof.

More marble is used to top the half wall that runs around the top of the staircase. 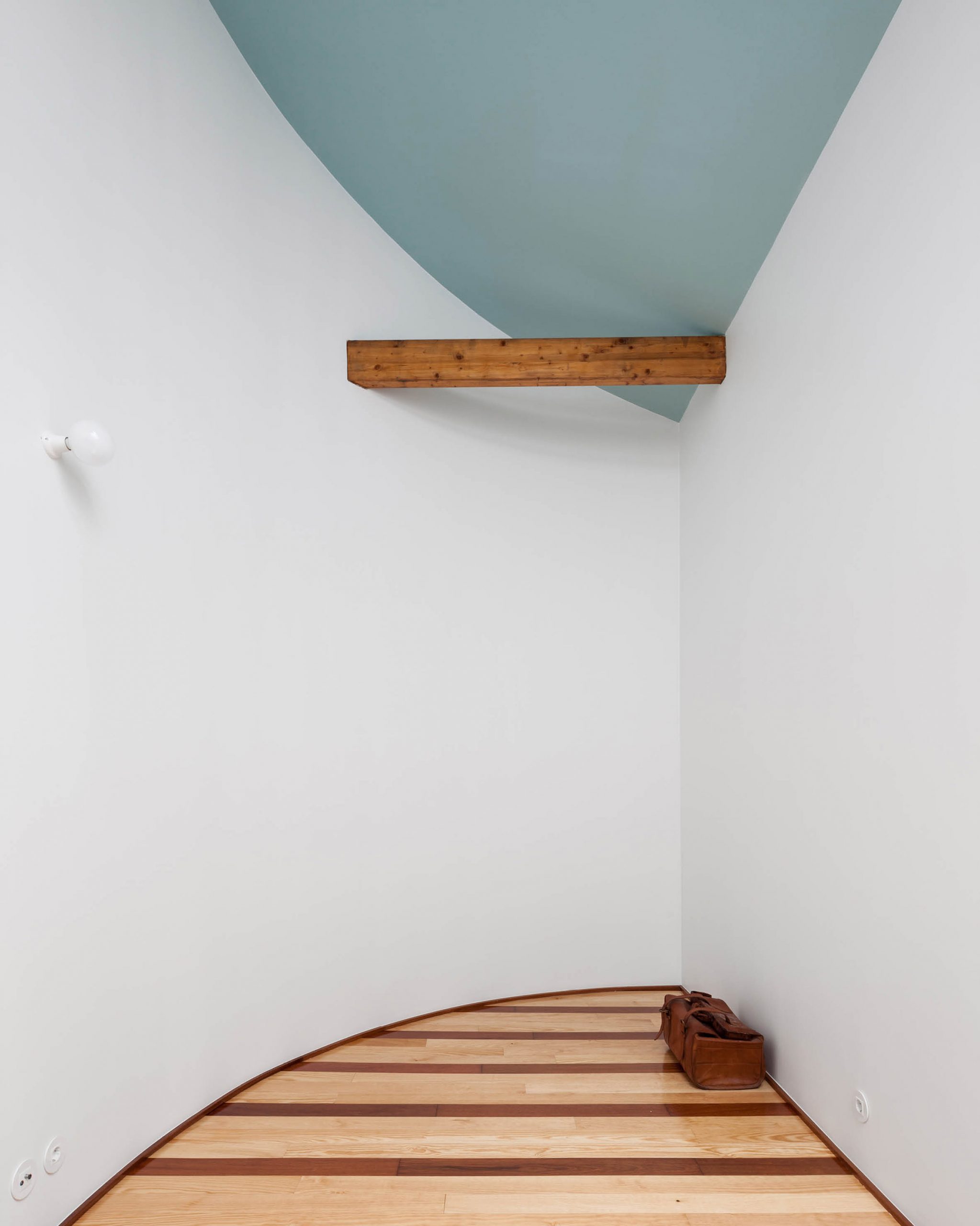 The same square white tiles as the splashback feature in the bathrooms, which have large round mirrors over the sink, marble countertops and cupboard doors in the same blue as every door in the house.

Fala Atelier, which was founded in 2013 by Filipe Magalhães, Ana Luisa Soares and Ahmed Belkhodja, is known for its colourful, geometric aesthetic. The studio used a curving wall for a flat in Lisbon, and decorated a 19th-century house in Porto with pink and blue lines and shaped railings.

Photography is by Ricardo Loureiro.