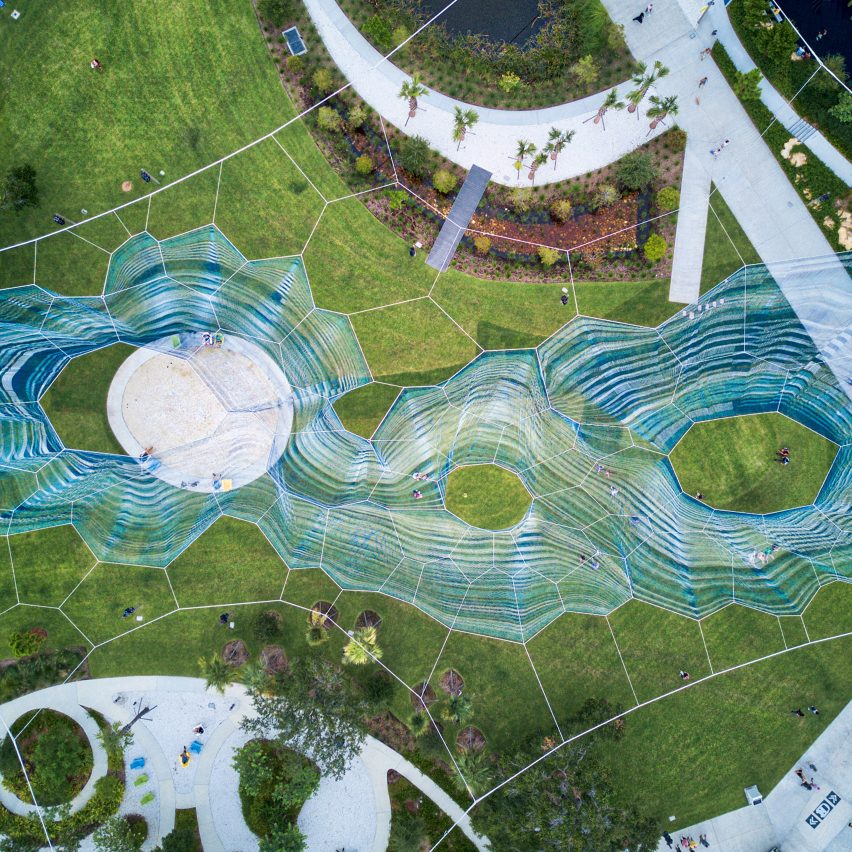 American artist Janet Echelman has installed a woven sculpture composed of blue fibres on a site in Florida with history that traces back to the American Civil Rights Movement.

Bending Arc is a permanent work suspended above a grassy park overlooking the Pier District in St Petersburg, Florida. 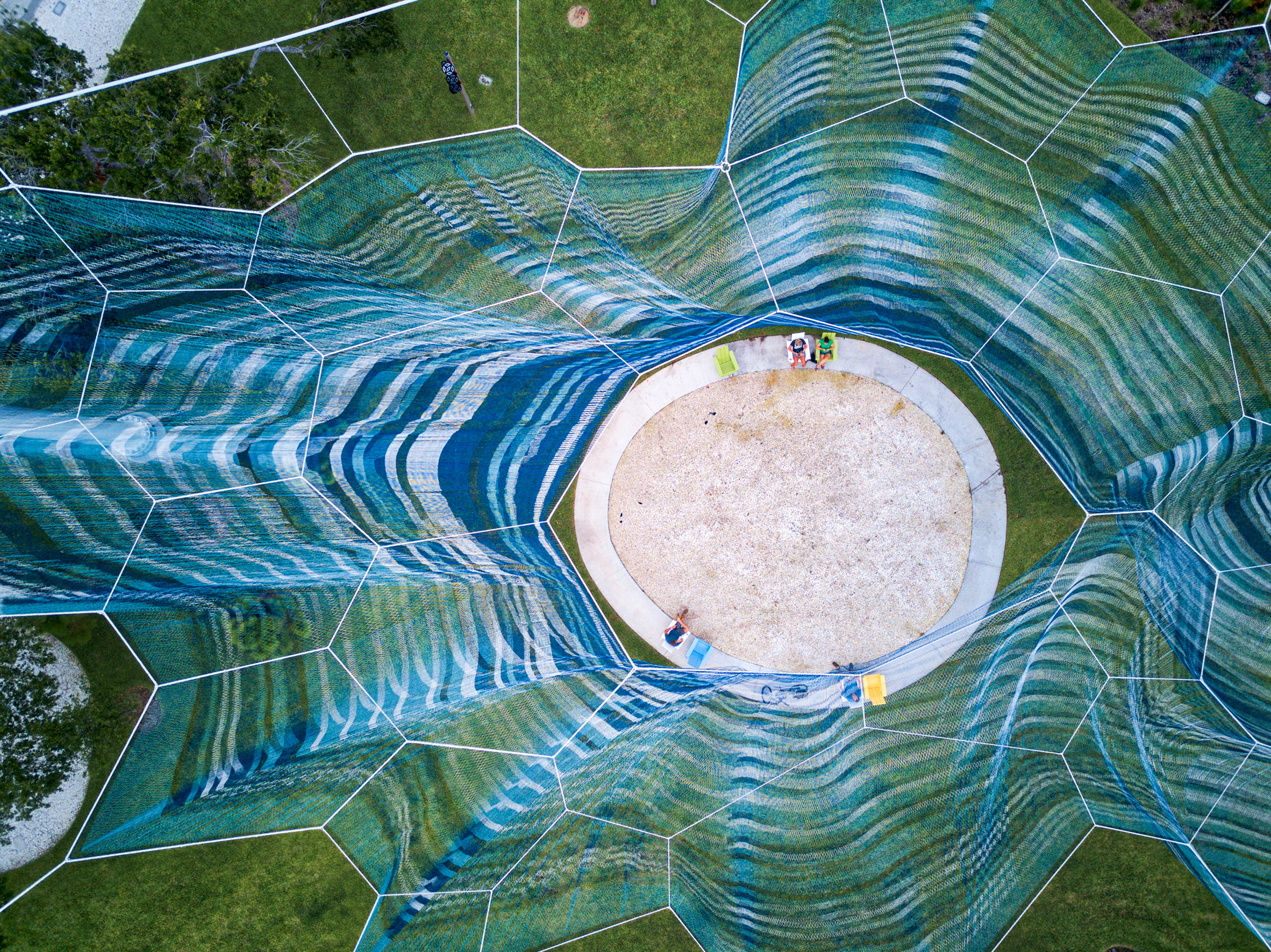 The piece is 72 feet tall (21.9 metres) at its peak and measures 424 feet in width (129.2 metres). Its shape constantly changes as it ripples with the movement of wind.

Echelman, a Florida native, took cues from the colours and patterns of beach umbrellas illustrated on old postcards and from marine barnacles that live beneath the pier to design the woven sculpture. 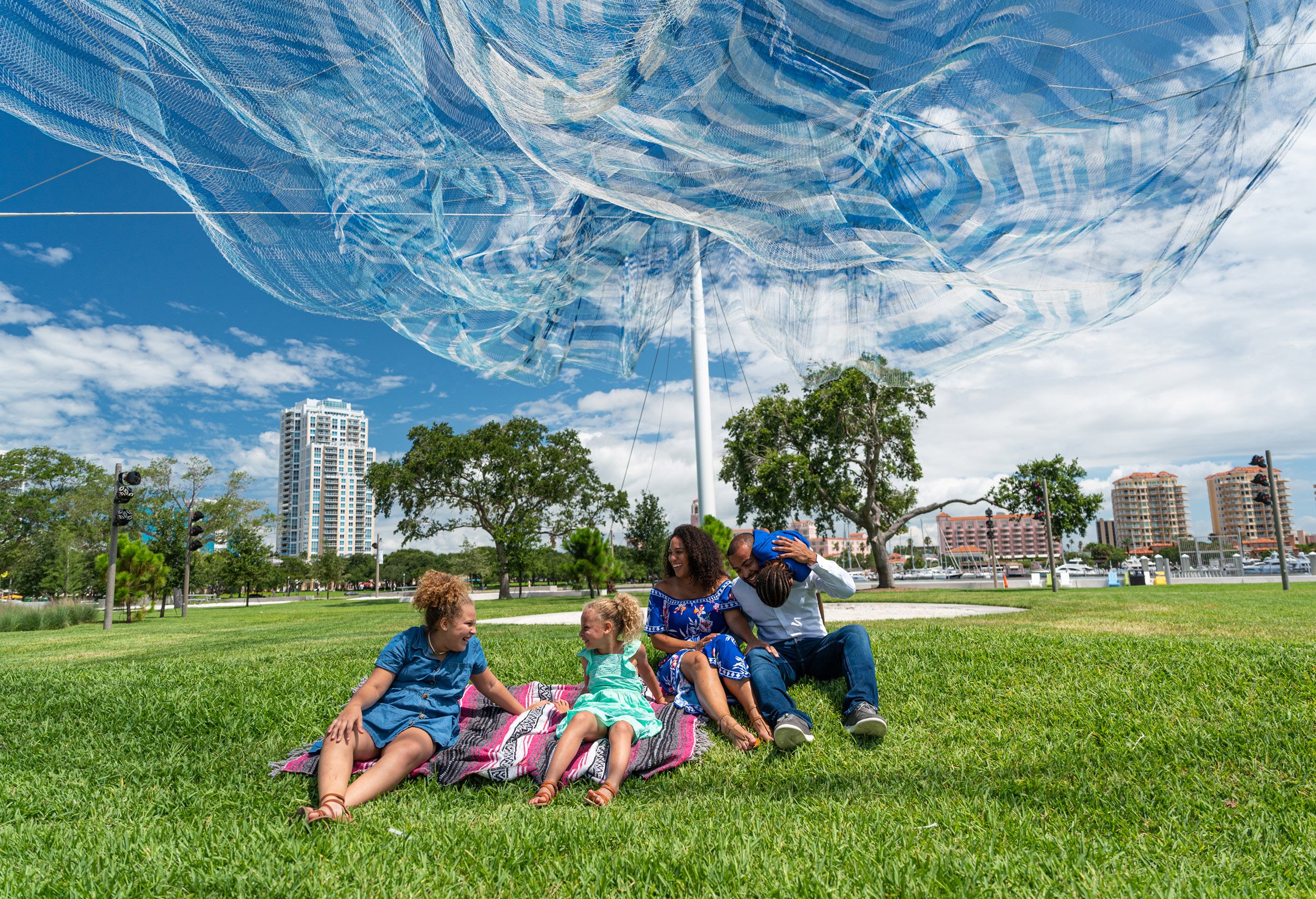 In her research she came across information about the site’s historical significance during the Civil Rights Movement, which began in the 1950s, as a location where local citizens protested segregation. The outcry led to the 1957 US Supreme Court ruling that allowed people of all races to use the municipal beach and swimming pool. 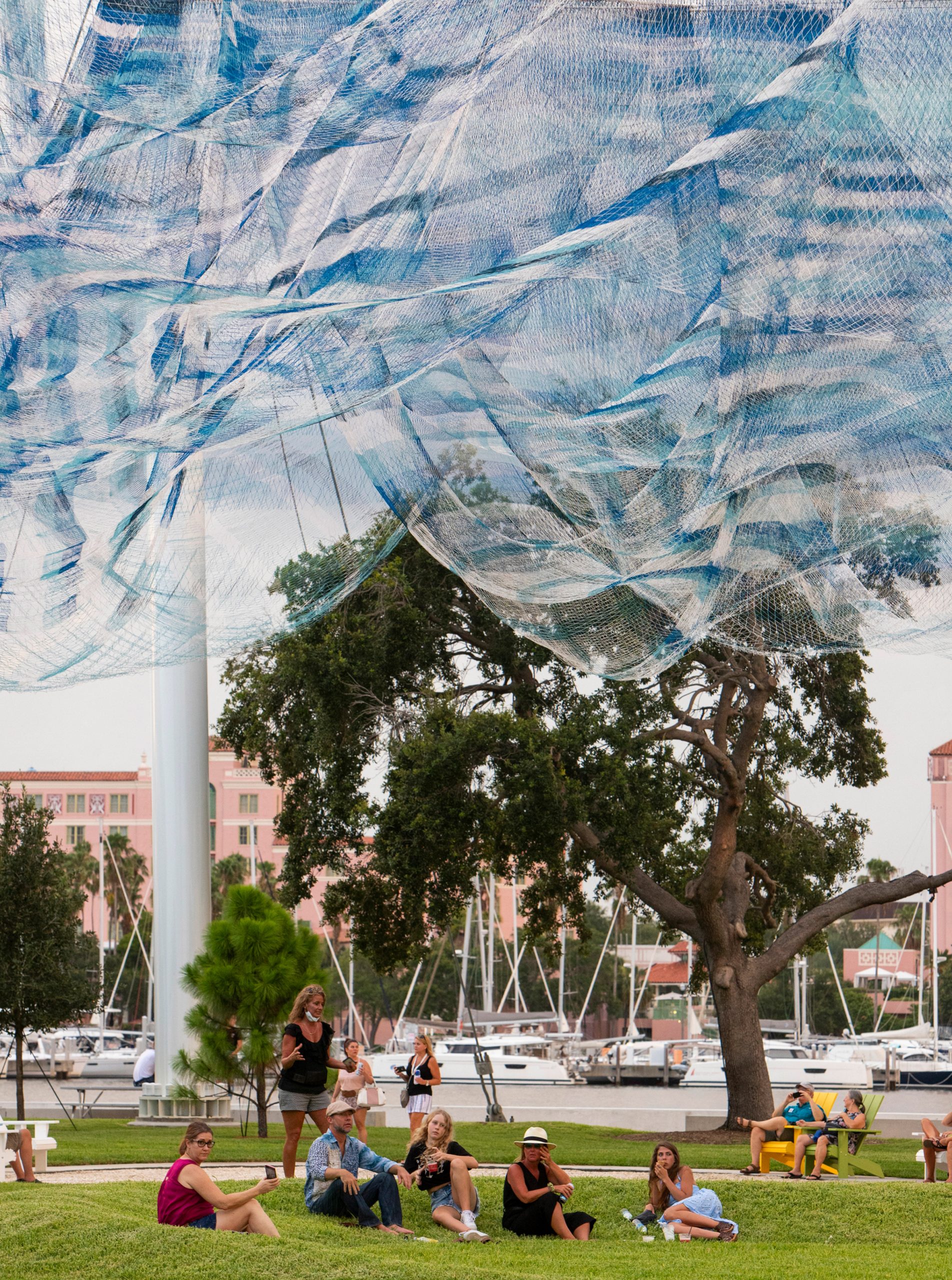 “I wanted to celebrate the courage of the people whose work led to the freedom and inclusion we can all experience today at the new pier,” Echelman told Dezeen.

Echelman has titled the work Bending Arc to reference words said by Civil Rights activist Martin Luther King: “The arc of the moral universe is long, but it bends toward justice”. 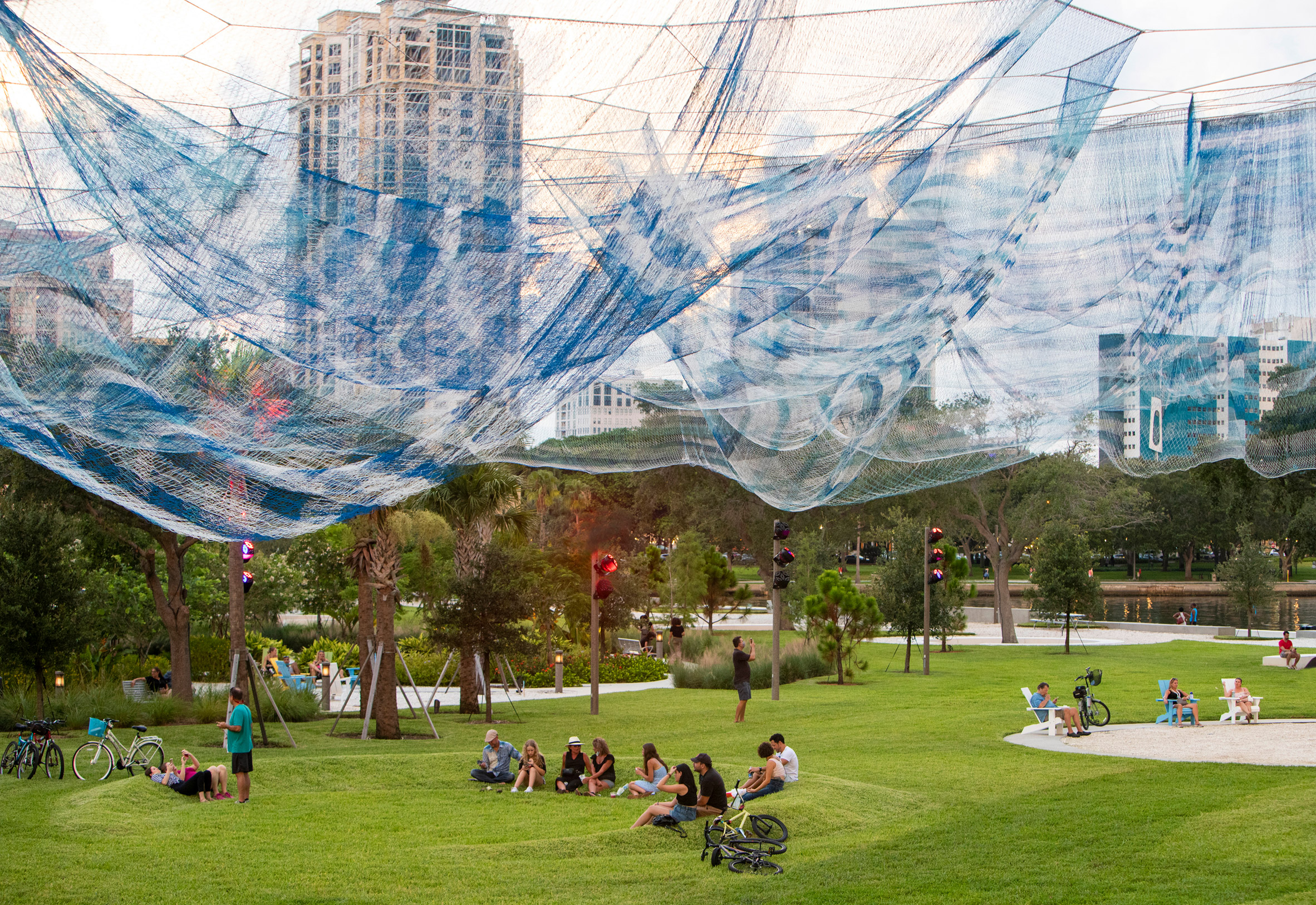 “The title Bending Arc is important to me, and it embraces the goal of the new pier to welcome everyone – all ages, all backgrounds,” she added.

“The colours of my sculpture reflect this – hues of blue like the sky in a full gradient from white to black.” 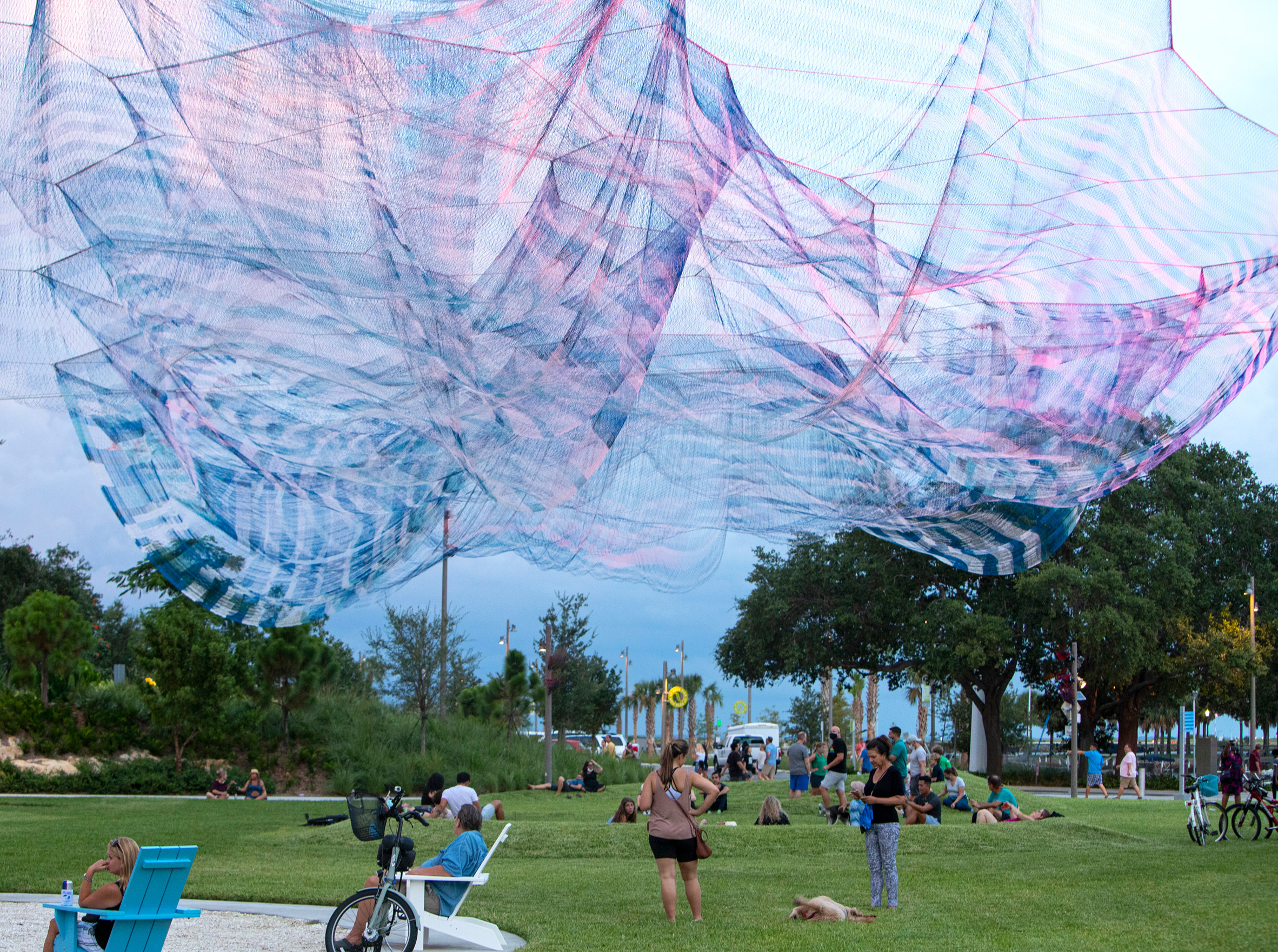 Viewed from above the piece has a rectangular shape composed of geometric orbs. Its centre is filled in with blue- and white- striped threading to match the pattern used on parasol designs.

To create the piece the artist shaped polytetrafluoroethylene (PTFE), an engineered fibre, into a thread-like textile. The coloured strands are braided together and wrapped around sewing bobbins to form a mesh netting that is knotted by hand.

An additional set of netting, composed of ultra-high-molecular-weight polyethylene fibre, is woven together by knots, following a method popularised by mariners. The mesh textile is 15 times stronger than steel and is attached by hand to the other piece.

On site cranes were used to install and pull the roping taut. The piece is designed to withstand Ultraviolet exposure and retain its strength under winds of 150 miles-per-hour (241.4 kilometres-per-hour).

At night low-energy LED lights project tones of pink and purple across the sculpture making it glow.

Echelman hopes the sculpture offers visitors a sensory experience and an appreciation for nature and humankind. 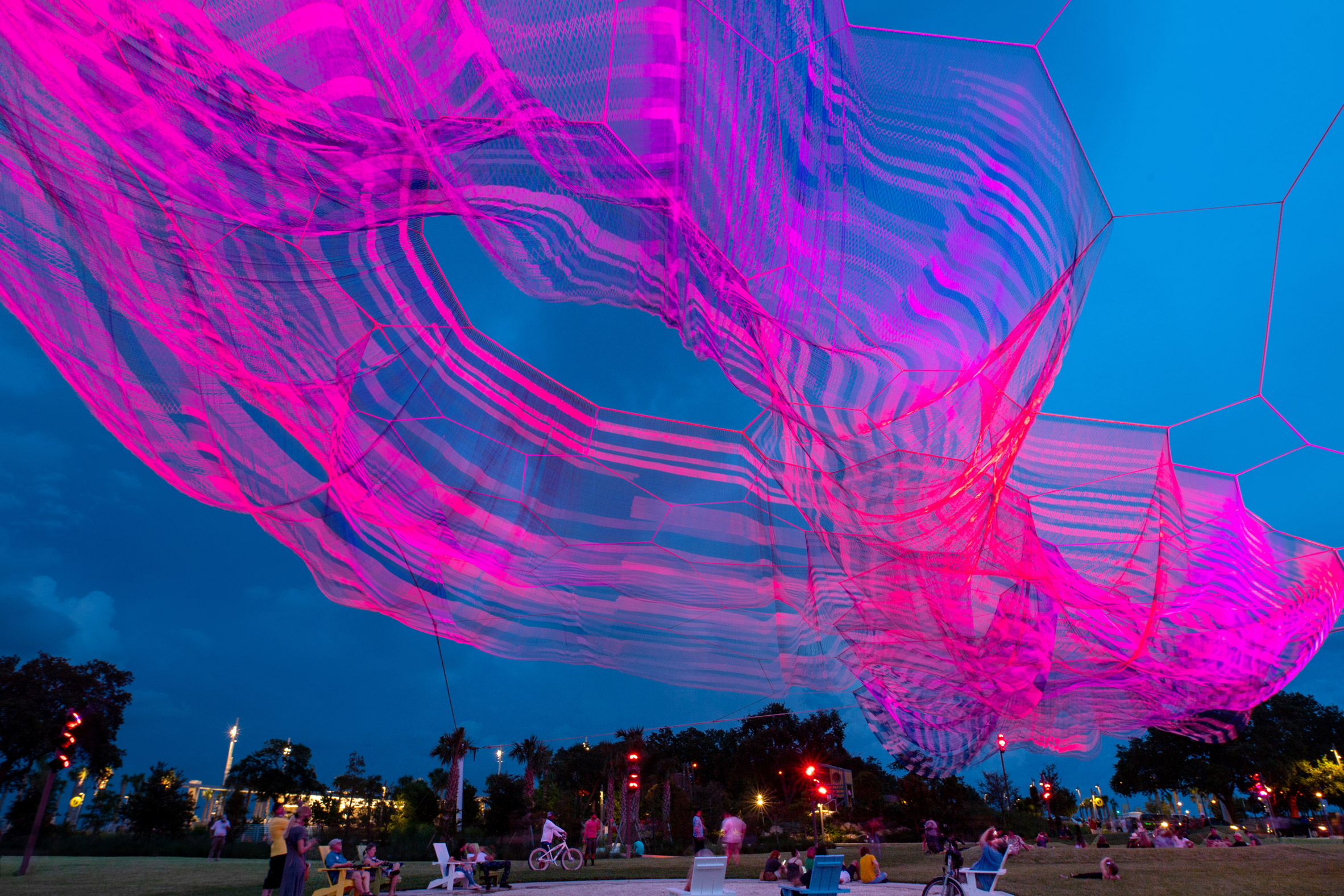 “My hope is that each person becomes aware of their own sensory experience in that moment of discovery, and that may lead to the creation of your own meaning or narrative,” she said.

“When I look at the sculpture, I see a physical proof of humankind’s ability to work together in shaping our physical world – and to ‘bend the moral arc of the universe.’ It’s a reminder of our interconnectedness on every scale.”

Janet Echleman has completed a number of woven sculptures in her career that have been installed all over the world.

In 2018, she hovered a pink and red textile over Madrid’s Plaza Mayor in celebration of its 400th anniversary, and in 2016 she hung a similar design hung over an intersection in London’s Oxford Circus.

Photography is by Brain Adams, unless noted otherwise.