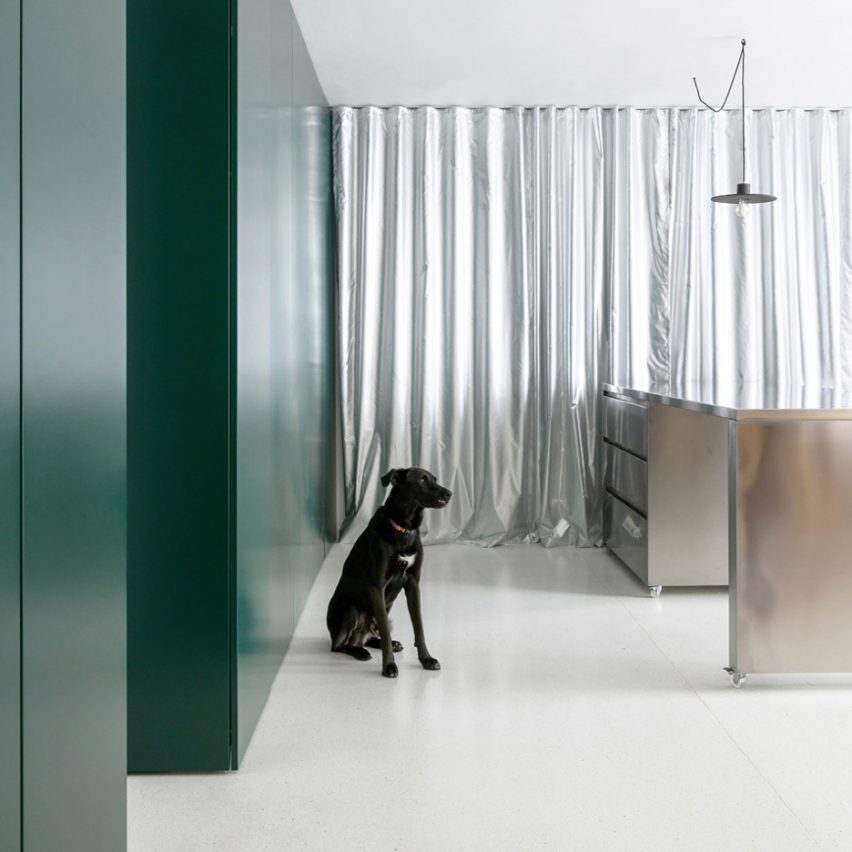 Arhitektura d.o.o has fit out this apartment in the Slovenian capital with metallic moveable furniture so its owners can adapt the layout to suit their busy social lives.

The apartment, named Rubikum for Three, is situated just outside the centre of Ljubljana and belongs to a young couple and their pet dog. 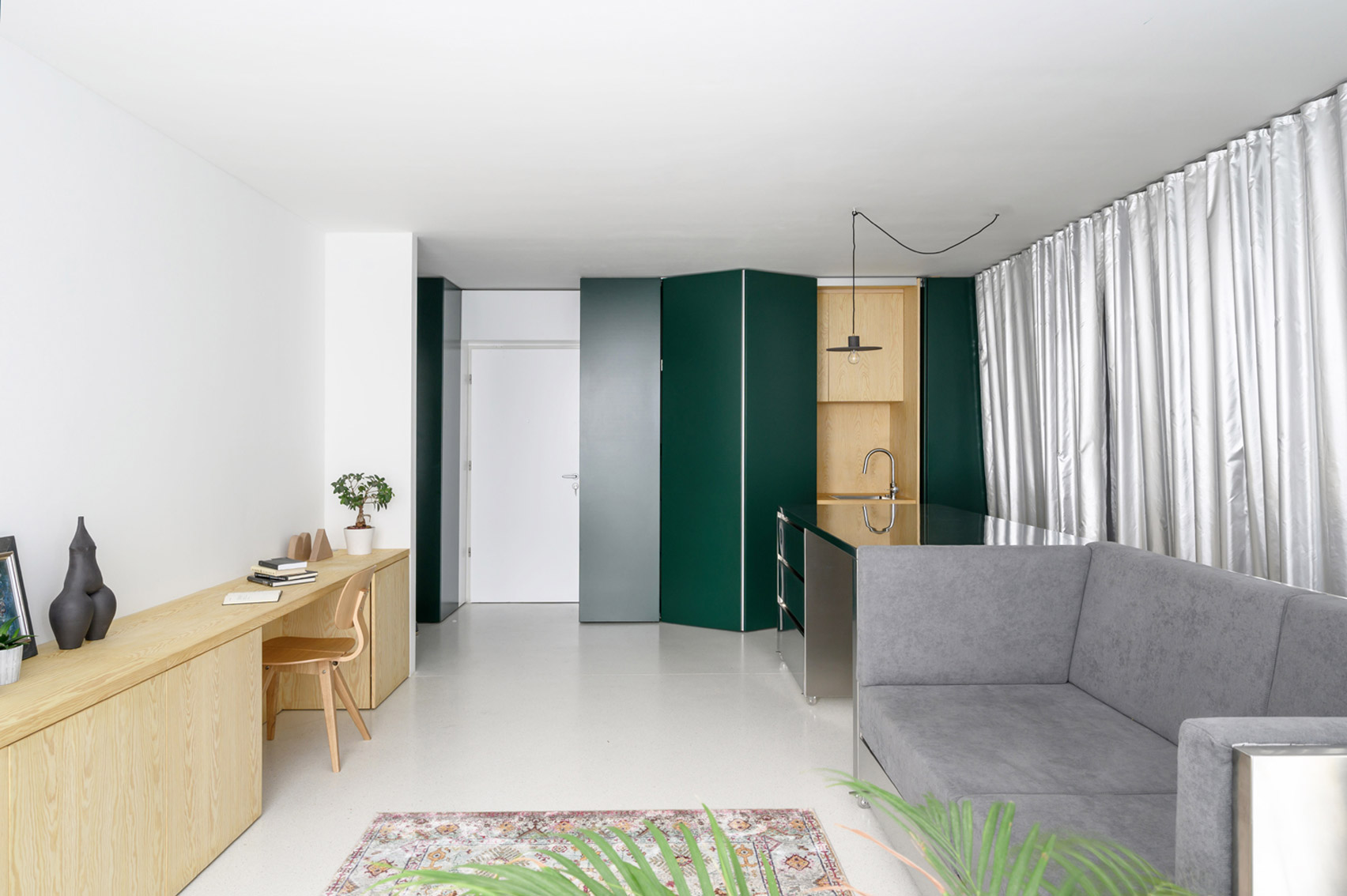 They had previously lived on the rural fringes of Ljubljana but missed the hustle and bustle of city life, so decided to move closer to the capital.

While the location of the 60-square-metre apartment was better suited to the couple, the standardised arrangement of the floorplan felt out of sync with their “dynamic” lifestyles. Locally based practice Arhitektura d.o.o was tasked with adjusting the layout. 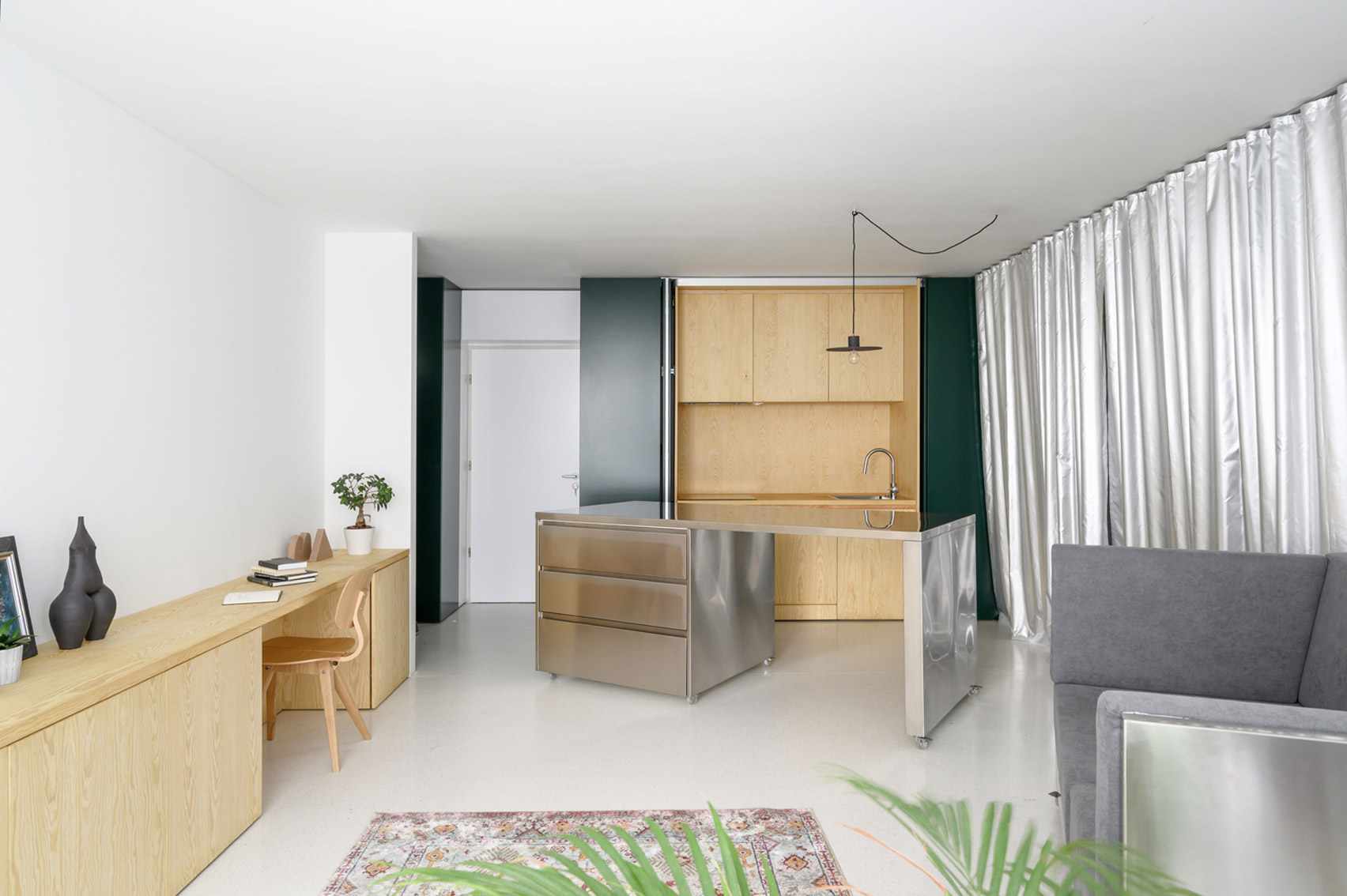 “The clients mostly work from home and also have a lively social life organising lunch get-togethers, movie nights and dinners with friends. They practice yoga and train their dog,” explained the practice.

“Therefore fixed and rigid furniture with predetermined position and function would hinder this.” 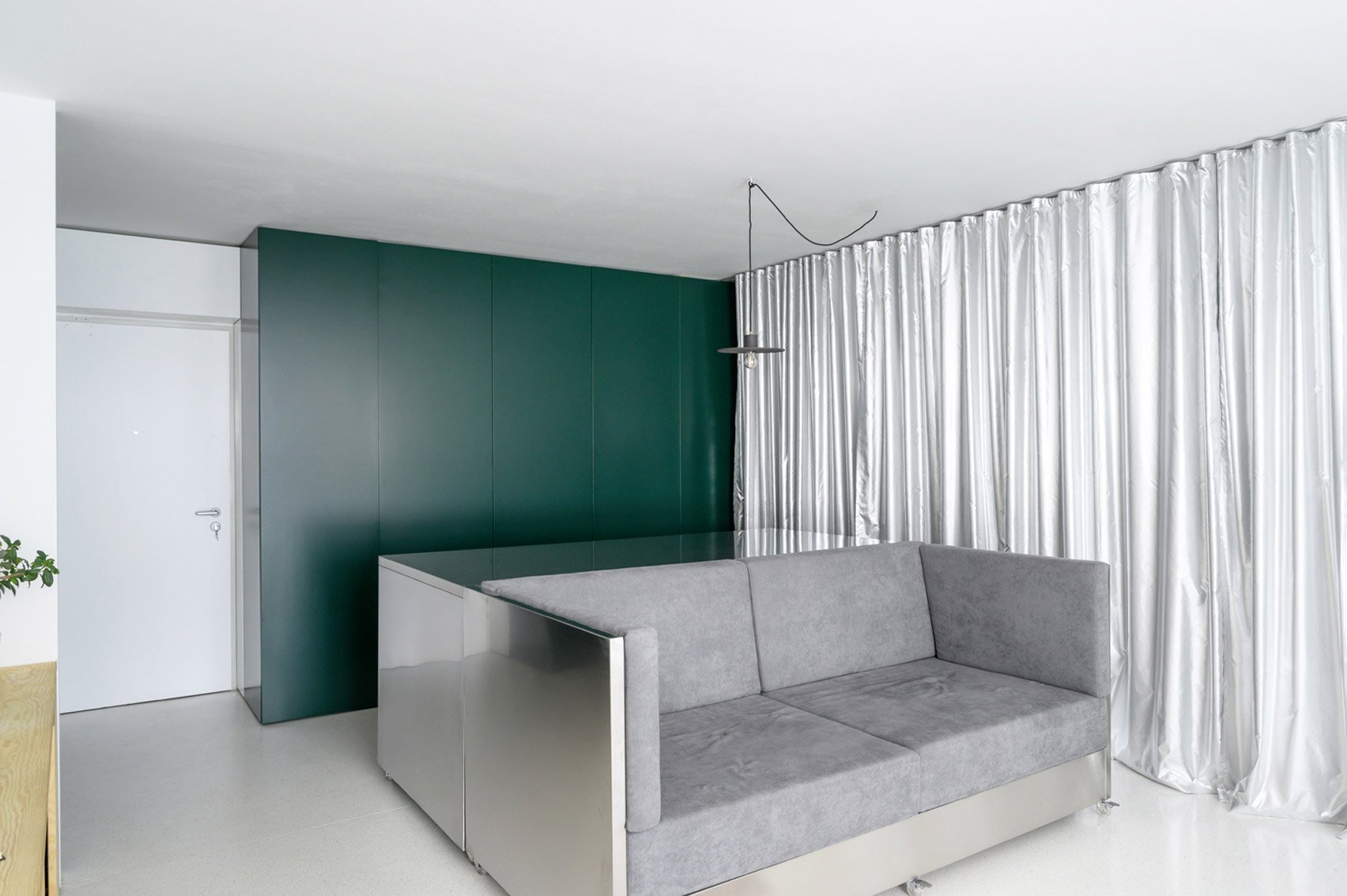 All of the existing partition walls in the apartment have been knocked through to form a looping floor plan that allows the inhabitants – and the dog – to easily move from room to room. The bathroom is now the only space that is now fully enclosed.

The variety of routes throughout the apartment is what encouraged its name of “Rubikum”,  a Slovenian term that the practice likens to a Rubik’s cube. 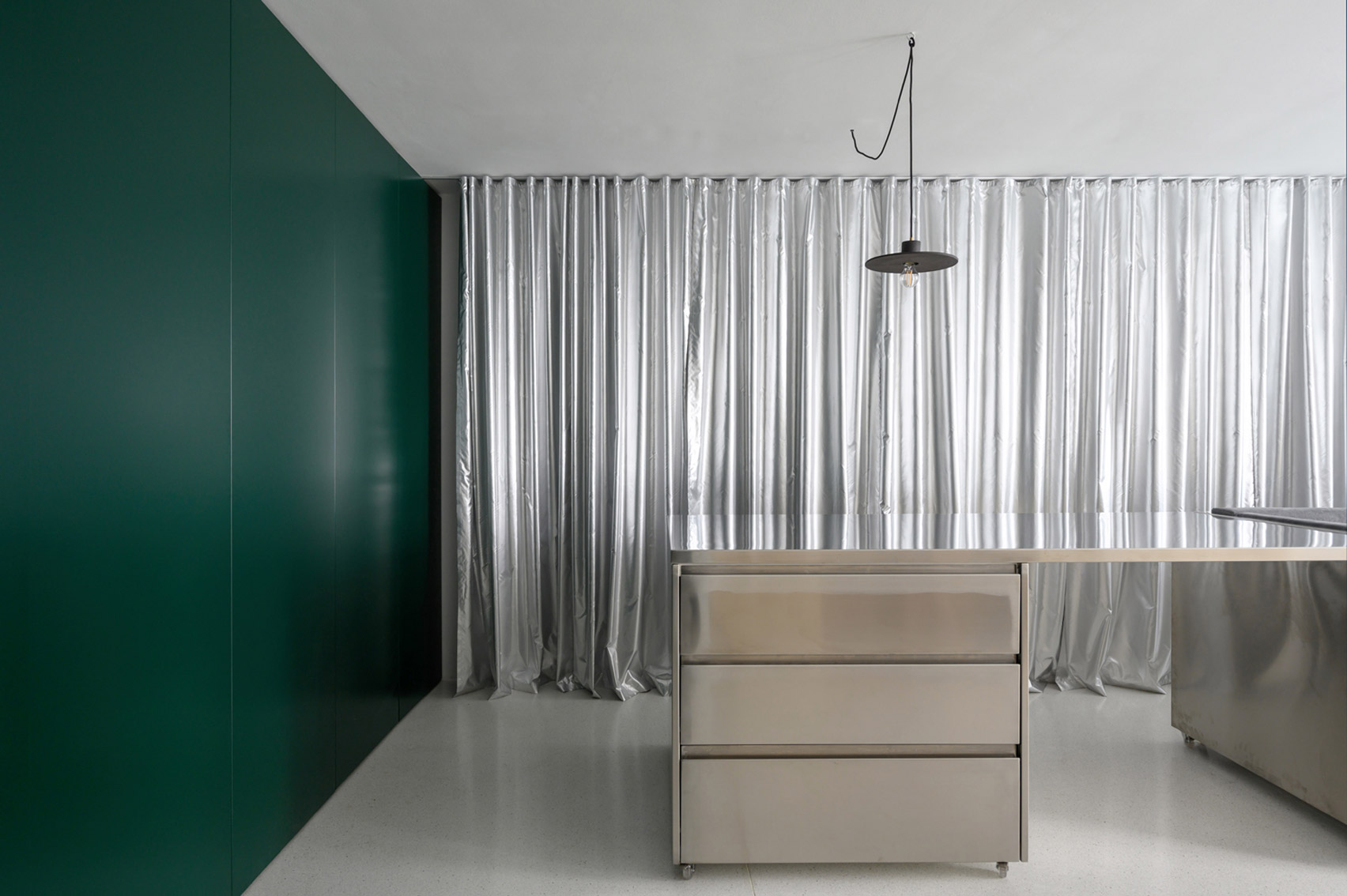 A stainless-steel counter with in-built drawers features in the central living area.

It’s set on castor wheels so that, when necessary, it can be moved around to serve as a prep counter, a dining table, or completely pushed out of the way if the couple has large groups of friends over. 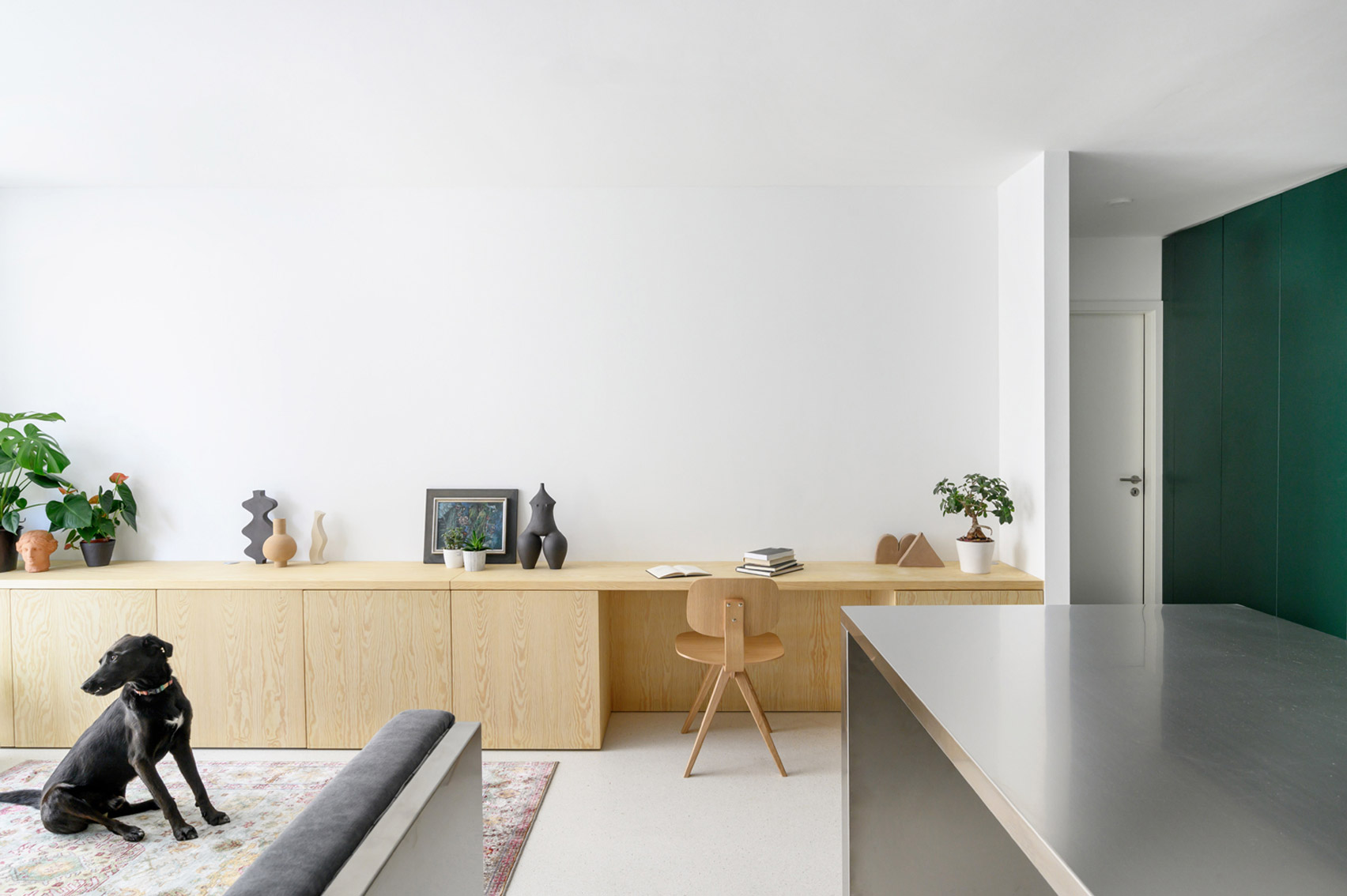 The grey sofa has has wheels and features a stainless-steel back. The practice specifically chose this material for the mobile furnishings in the hopes that its “subtle lustre” would give the impression of additional light in the apartment.

A pale terrazzo floor features throughout. 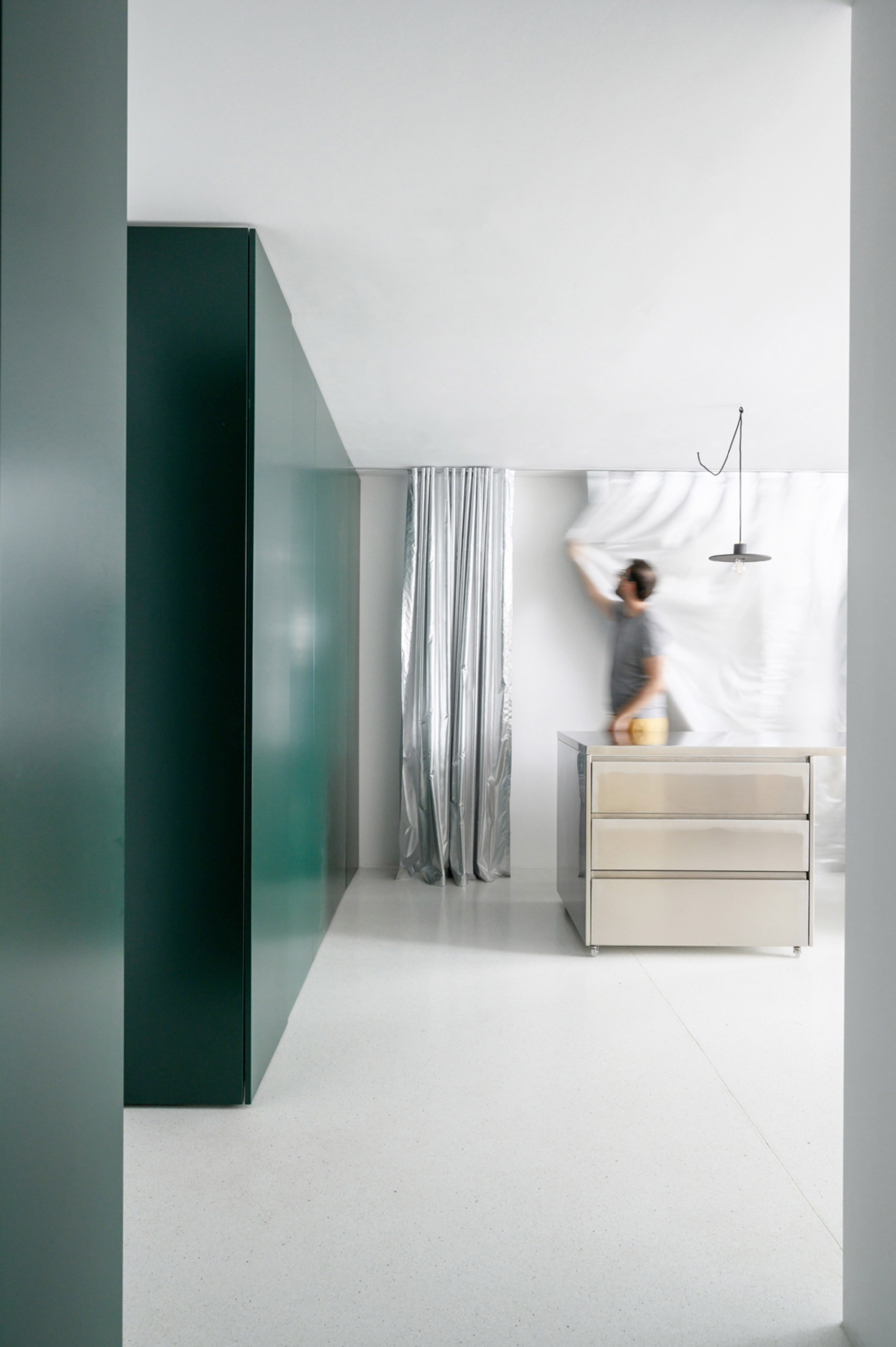 There are a couple of fixed elements in the living area. Down one side runs a wooden sideboard that’s integrated with a work desk.

Beside the apartment’s entrance, there is also a kitchenette with wooden cabinetry, hidden behind a series of green floor-to-ceiling panels that contrast the other metallic surfaces in the room. 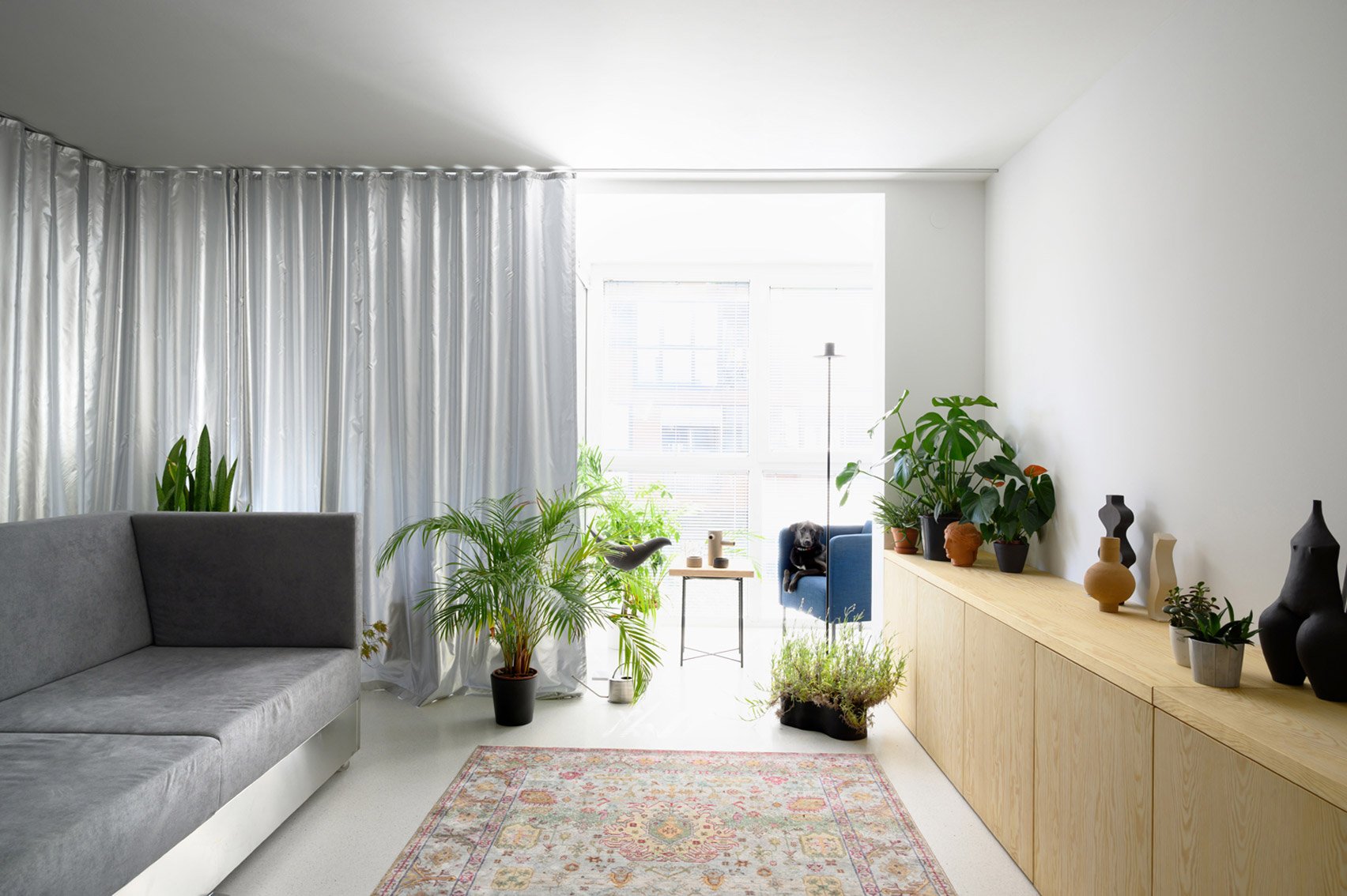 Should the inhabitants want the living area to feel cosier and closed off, they can draw across a full-length silver curtain that has been set on a curved track on the ceiling.

When drawn back, it reveals a small winter garden that’s dressed with a couple of armchairs and an array of leafy potted plants. This can be walked through to access the bedroom, which features tall wooden storage cupboards. 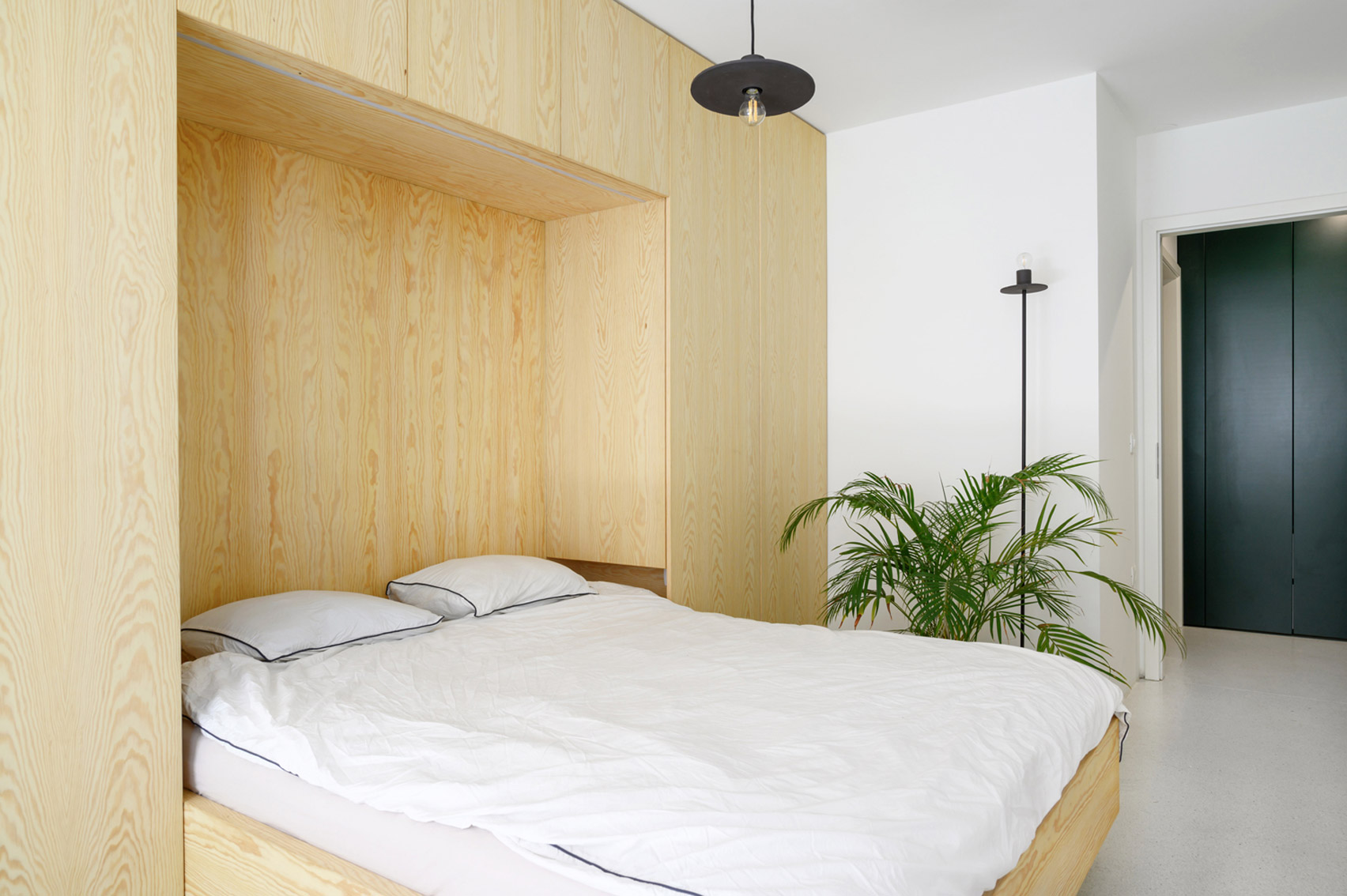 Arhitektura d.o.o has been established since 1997. The practice has completed a number of projects in its home city of Ljubljana – others include a concrete house that includes a ceramics studio for the owner, and an apartment that contrasts black walls with oak-lined fixtures.

Photography is by Miran Kambič.