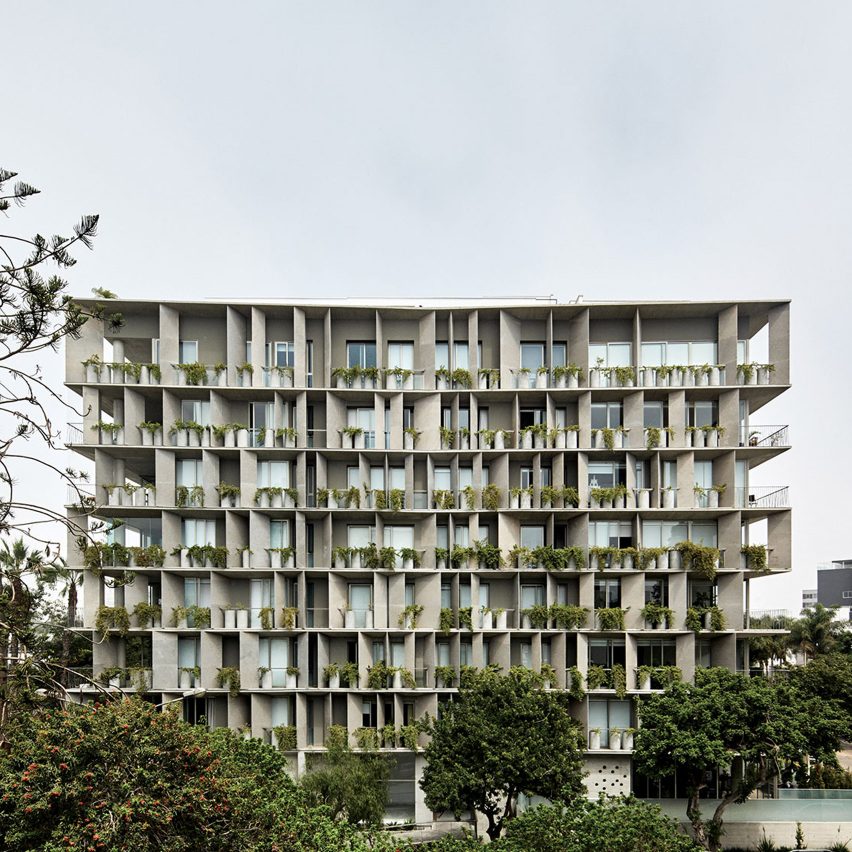 UN Park Apartments is located next to Parque Naciones Unidas, which translates as United Nations Park, in the Miraflores area of the Peruvian capital. 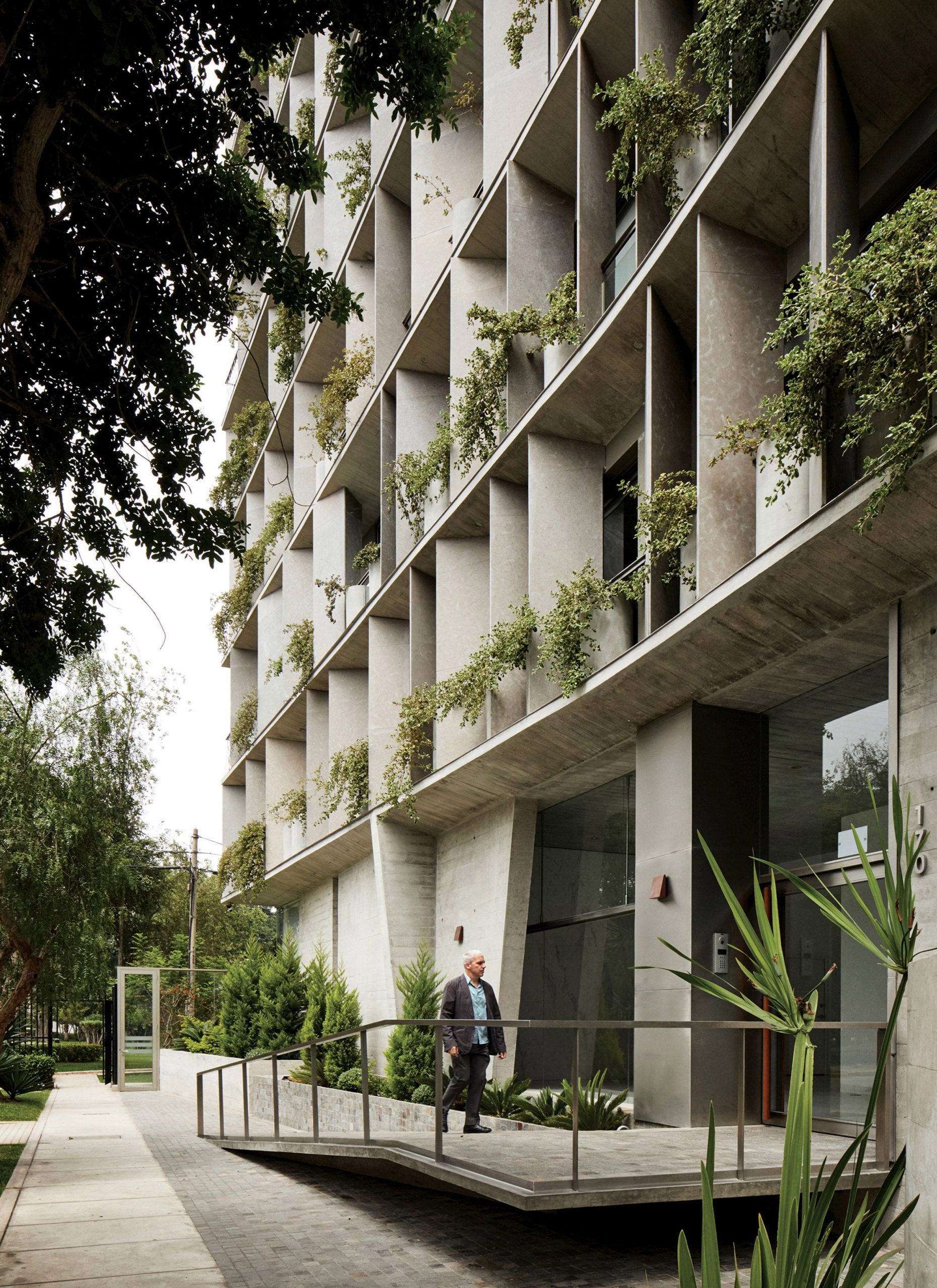 The site is open to the park in the south, Avenue Aganmos Oeste to the north and a cul-de-sac to the east – a feature the local firm said the project offered them an unusual opportunity for design in the city.

“Plots with three facades are not usual in Lima, a city where there are no gaps between buildings,” said Barclay & Crousse. 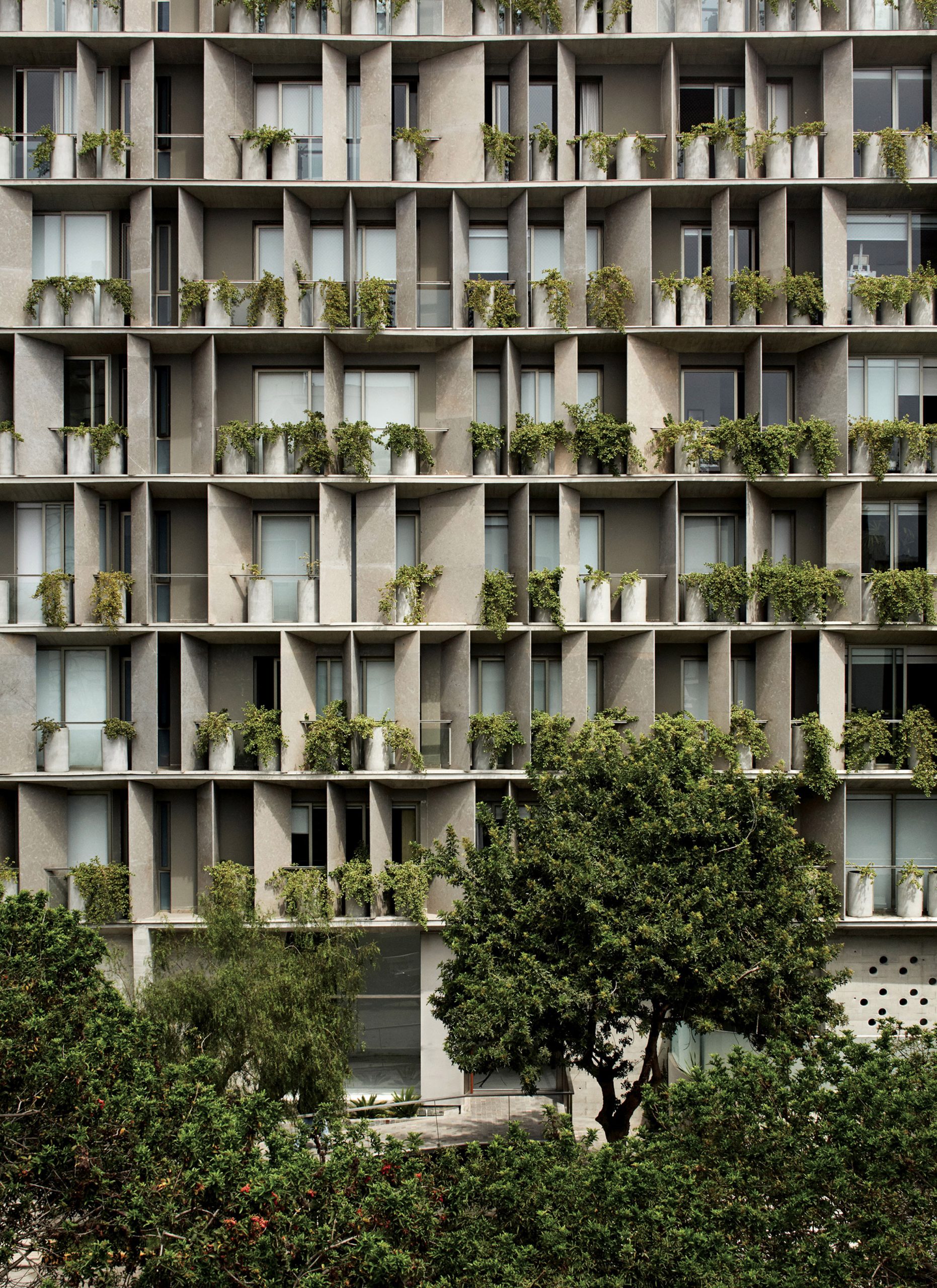 Balconies and windows wrap the three walls of the concrete building but have different designs on each facade to respond to surroundings and the sun.

“The open sides are surrounded by a continuous cantilevered balcony that acts as a buffer space between domestic interior and urban exterior conditions,” the firm added. 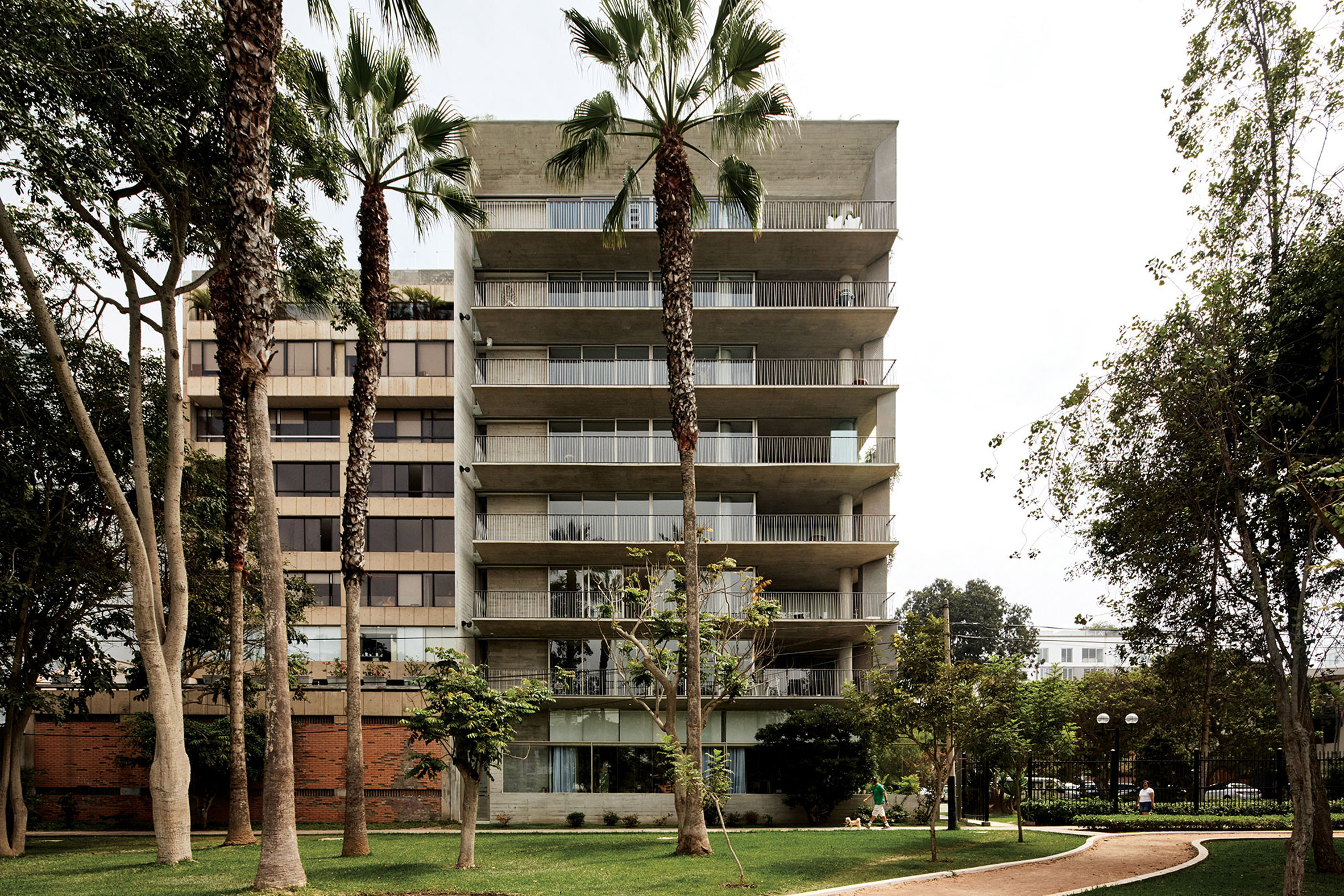 A standout feature of the building is the longest side that faces the cul-de-sac, which has curved concrete balconies separated by vertical screens made from Peruvian stone Estela Sombra. These are angled to provide privacy and shading.

“The east side over the cul-de-sac is treated as a vertical garden to ensure intimacy from the neighbouring building,” Barclay & Crousse continued. 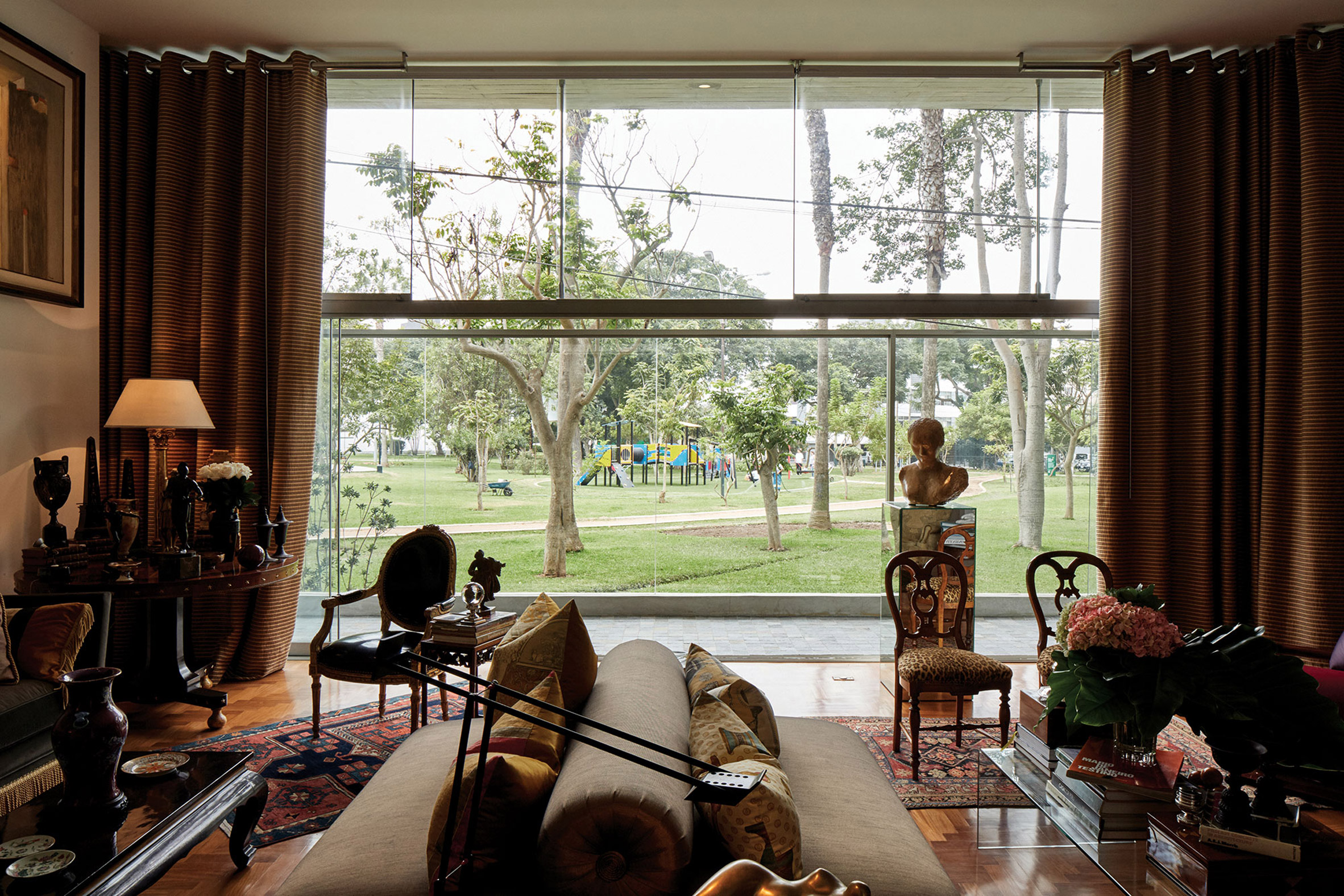 Long, uninterrupted balconies run along the wall facing the park and eastern edge of the northern wall, with glass doors set behind opening into the residences. Boxy, concrete windows protrude from the northern wall to add additional natural lighting.

UN Park Apartments is made from a concrete structure that comprises an earthquake-resistant flat-slab reinforced concrete frame and an inner concrete shell. This allows for open-plan residences inside the nine-storey-high building comprising 15 flats and underground parking.

Each floor is separated into two apartments, typically including two ensuite bedrooms. While the building’s entrance is covered in white marble, the homes have a pared-back material palette that teams the exposed concrete structure and woodwork. Barclay & Crousse is a Lima firm led by Peruvian architects Jean Perre Crousse and Sandra Barclay. The pair set up their studio in Paris in 1996, before relocating to Lima in 2006.

The firm’s other projects include the clifftop Casa C3, an archaeology museum and the “deceptively simple” Edificio E university building in northern Peru, which was awarded the Mies Crown Hall Americas Prize in 2018. 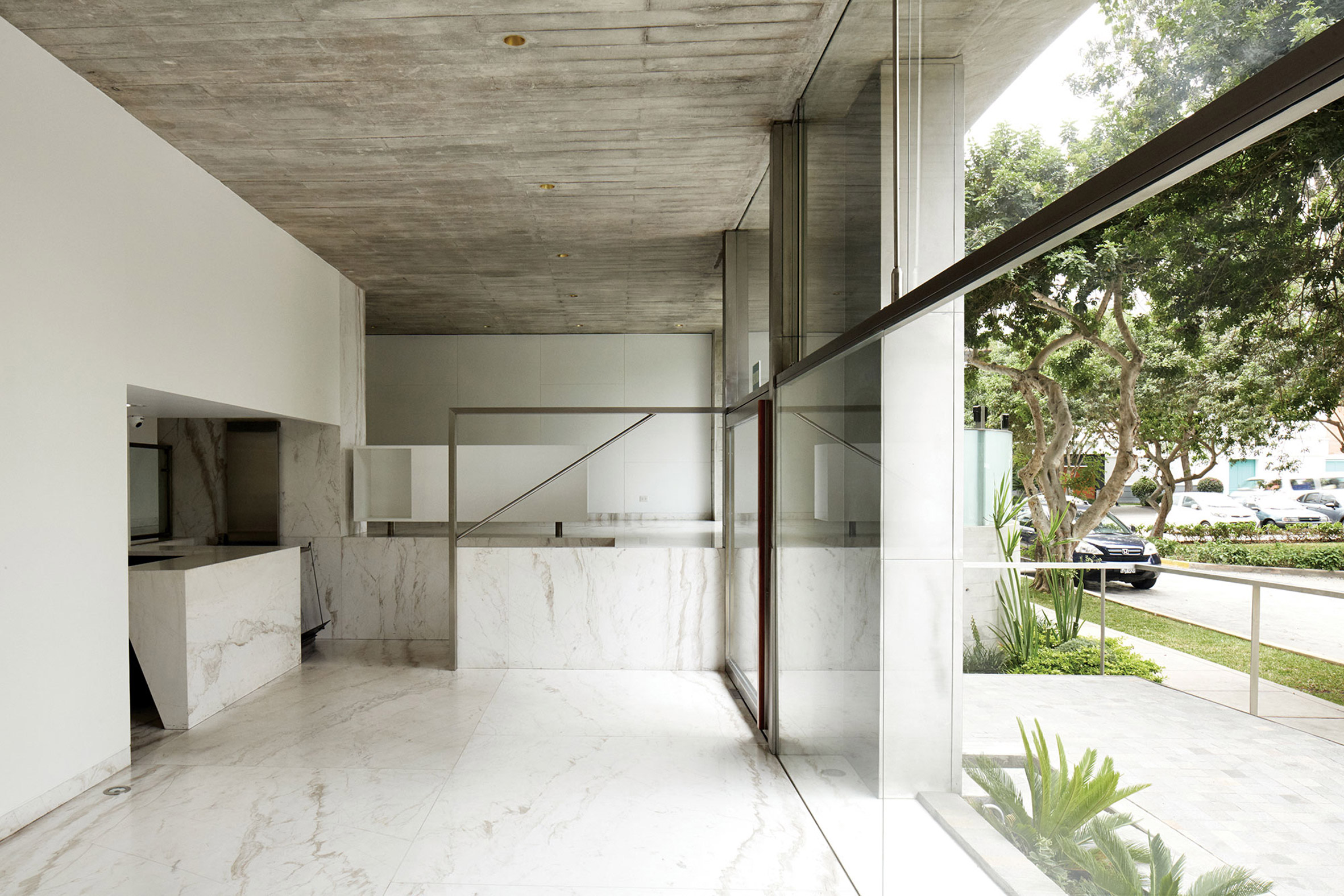 After receiving the award, Crousse and Barclay told Dezeen in an interview that Peru is making a comeback following decades “erased from the architectural map” thanks to international recognition of impressive new buildings in the country.

Photography is by Cristobal Palma.