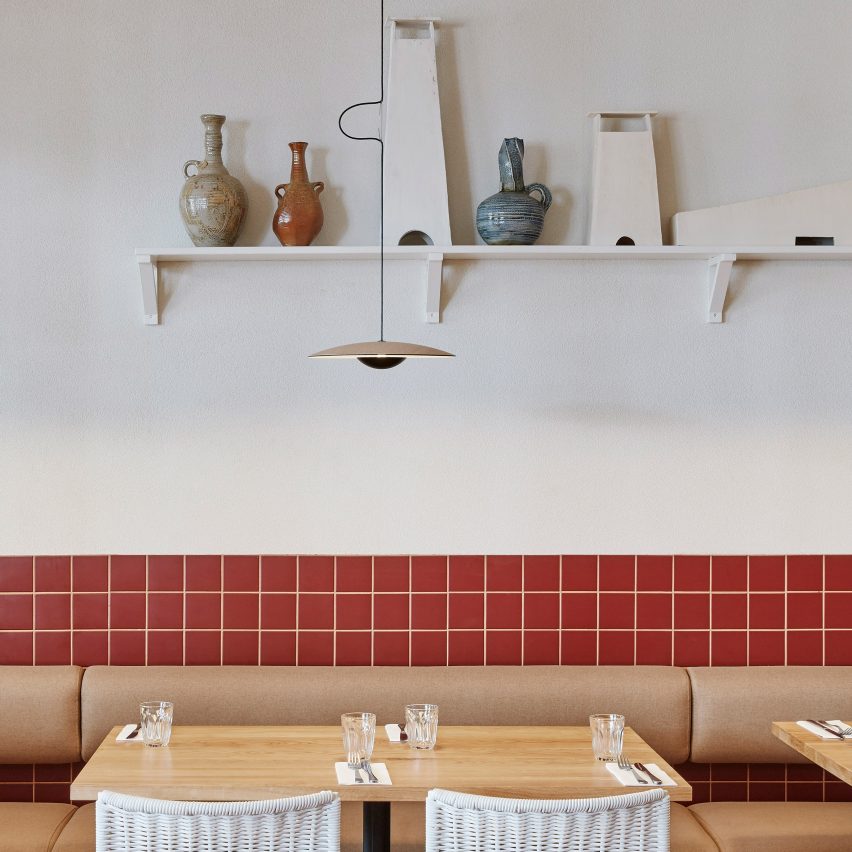 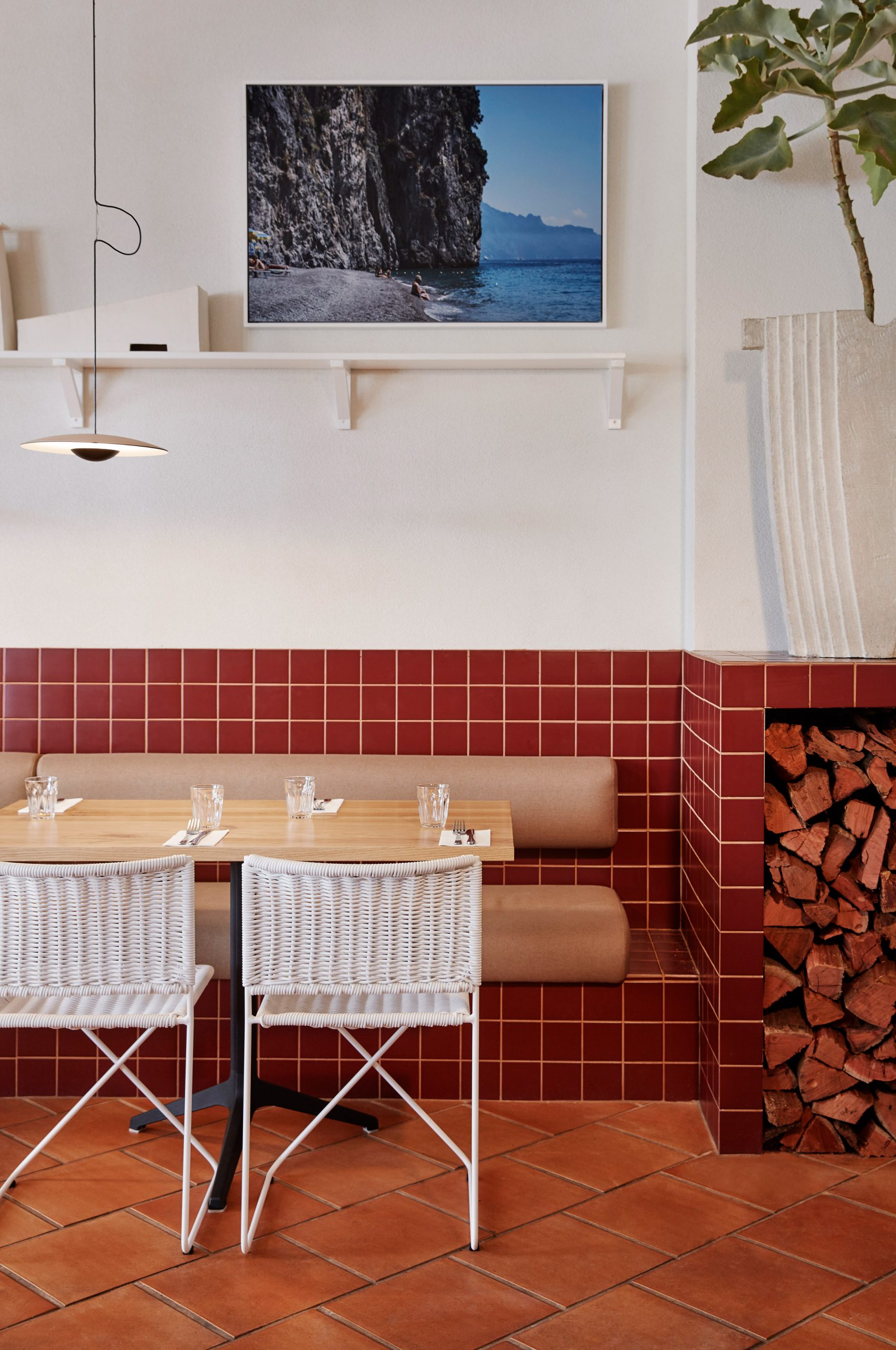 Locally based Ohlo Studio was tasked with designing the interiors and set out to create an aesthetic that, like the restaurant’s name, is “timeless and no-fuss”.

The studio also wanted the space to texturally reflect Italy and the country’s “rustic sophistication”.

“It needed to evoke a distinct atmosphere and personality reinforcing the cultural heritage behind the food,” explained the studio. 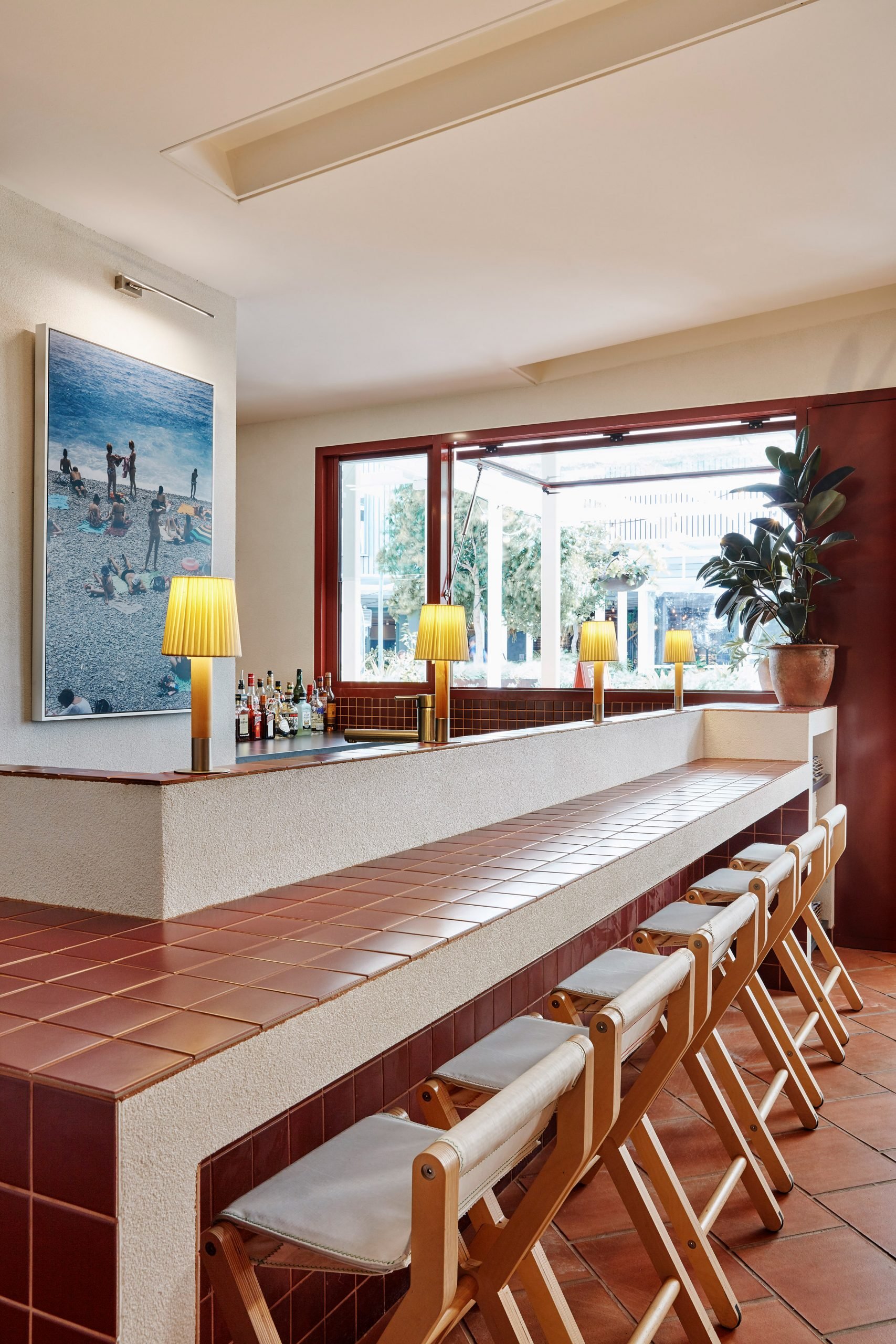 On one side of the restaurant, burnt-red tiles have been used to line the lower half of the wall.

The same red tiles clad the central bar counter. It’s surrounded by wooden fold-out high chairs, where customers can sit and eat within view of the open kitchen or grab a quick drink. 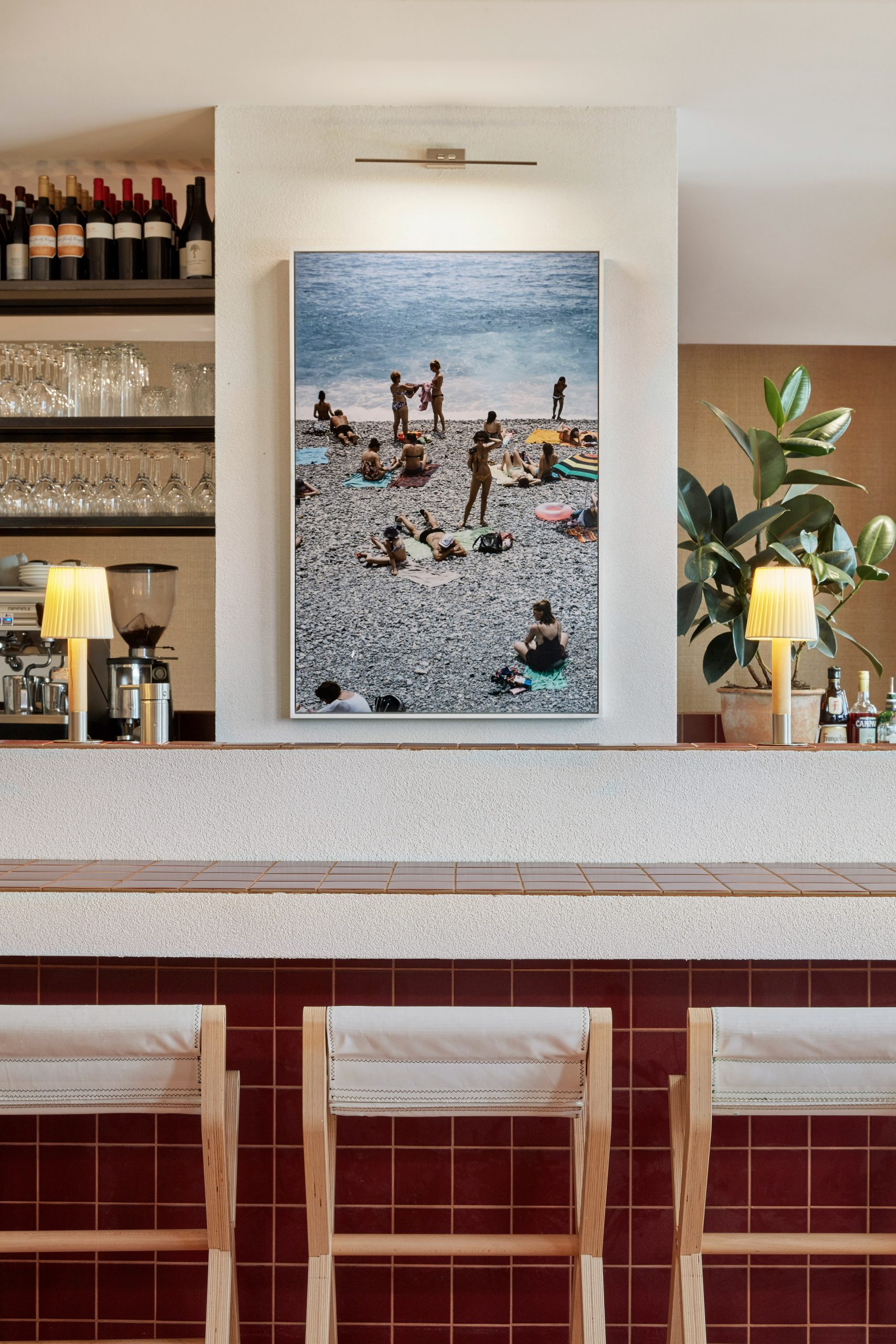 A wall on the opposite side of the restaurant has been completely lined in hessian, which extends down to cover a chunky plinth that runs in front.

The plinth serves as a base for a series of tobacco-hued cushioned seats that can be easily pushed together or apart to suit different-sized groups of diners. 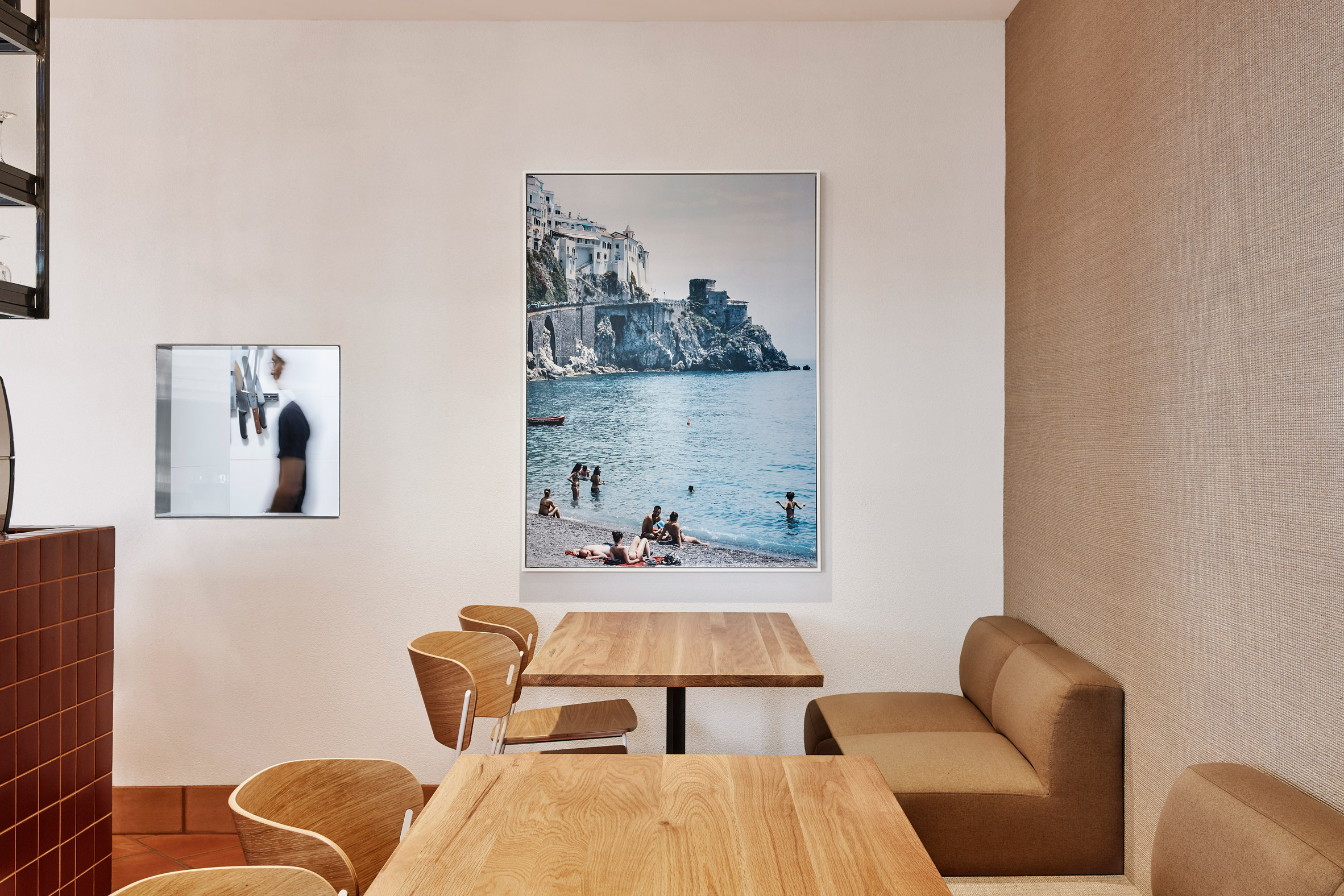 Homely decor elements such as ceramic vases, potted plants and tiny lamps have been dotted throughout to evoke the same feel as a “neighbourhood Italian espresso bar”.

Large photographic prints that capture scenes from sun-drenched Italian beaches have also been mounted on the walls.

In a bid to contrast the commercial setting of the shopping centre, the studio has applied the same selection of warm materials used inside the restaurant to its exterior.

“The tiled bar puncturing the facade also activates the boundary and creates a playful entry,” added the studio. 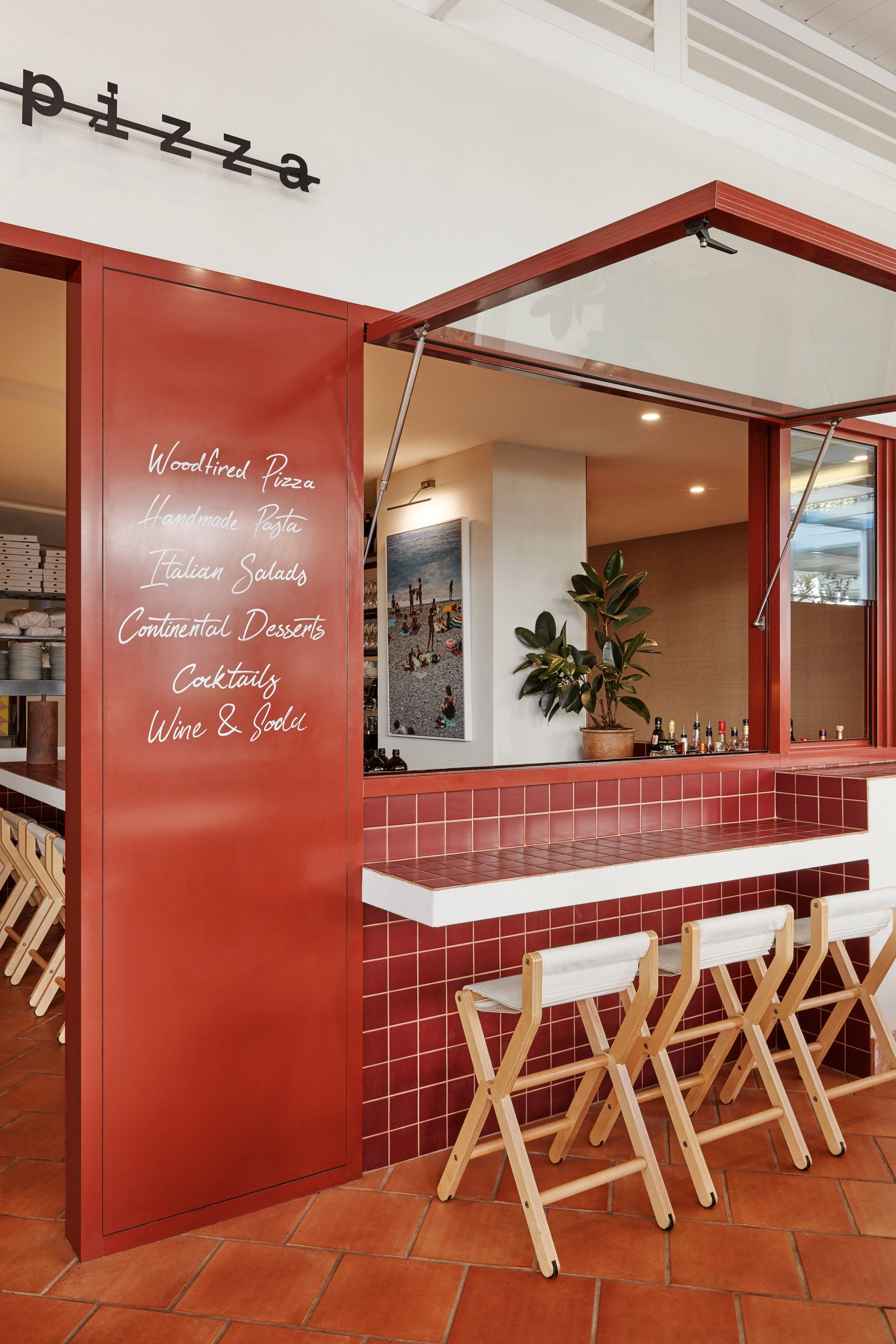 Ohlo Studio was founded by interior architect Jen Lowe and is based in Perth’s South Fremantle suburb.

The studio’s Dough Pizza project is one of several trendy Italian eateries across Australia. Others include Glorietta by Alexander & Co, which features wooden furnishings and a caged rattan ceiling.

There’s also Pentolina by Biasol, which has worn concrete walls and pink-marble fixtures to emulate the materiality of Ancient Rome.