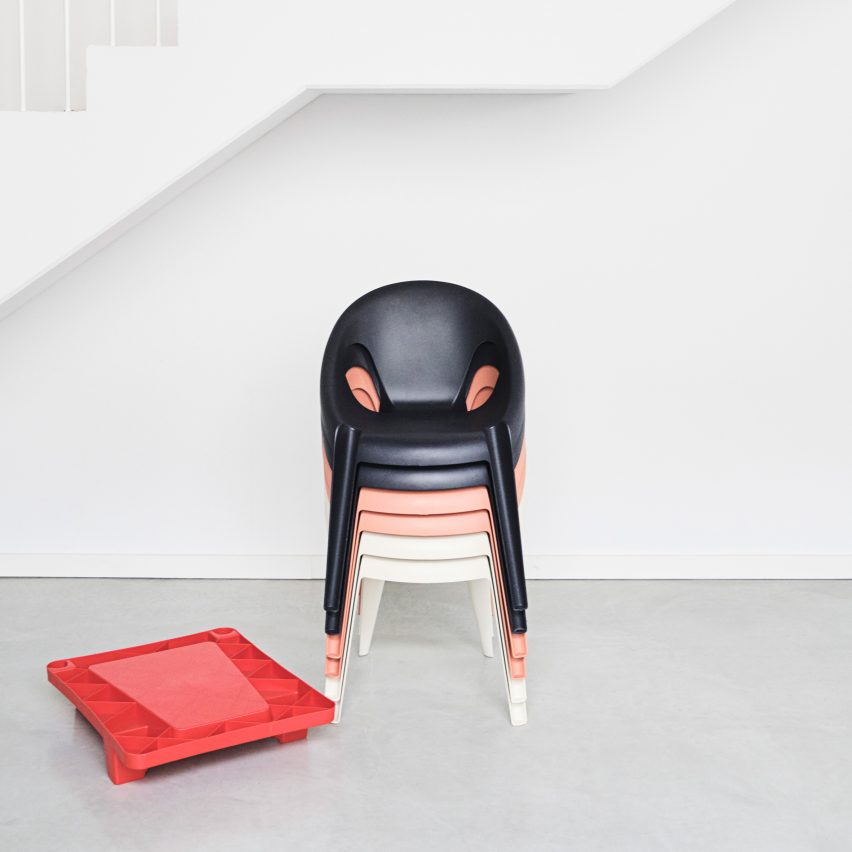 Konstantin Grcic discusses the painstaking design process that went into creating the Bell Chair, his latest product for Magis, in a talk recorded by Dezeen for the brand to mark the chair’s launch today.

In the video, Grcic discussed the design of the Bell Chair, a stackable chair formed of one piece of injection-moulded recycled polypropylene.

The chair, which Grcic describes in the video as “an egg shell with four c-shaped legs,” is a lightweight 2.7 kilograms.

According to Grcic, it was designed within a very strict set of parameters in order to ensure that the final product would be as cost-effective, energy efficient and sparing in its use of materials.

In order to meet these guidelines, Grcic and Magis collaborated to design a recyclable chair that comes in three colours, is made of industrial waste produced in the manufacturing of other injection-moulded plastic chairs, and takes less than a minute to be produced.

During the talk, Grcic explained how creating a simple product can lead to a paradoxically complicated and intensive design process.

“It was really a process of simple ideas and sticking to those very simple principles, and then step by step, very carefully, very thoroughly optimising it,” he said.

Distinguishing the chair from previous injection-moulded plastic pieces that are designed to either make an aesthetic statement or be as cheap as possible, Grcic describes the Bell Chair as “a very rational, intelligent project” developed in close collaboration with engineers.

Grcic, who set up his studio in Munich in 1991 after studying design at the Royal College of Art in London, spoke to Fairs about his history with Magis.

The designer’s long-running relationship with the brand began with Chair One, a die cast aluminium chair first produced in 2003.

Grcic went on to create numerous other products for Magis, including a cast iron sofa inspired by machinery parts and a chair with a backrest like a pool noodle.

Magis was founded in 1976 by Eugenio Perazza. Amongst the furniture producer’s other products is a rotation-moulded chair that resembles a spinning top by Thomas Heatherwick, a wavy plastic bench by Ron Arad and the often-copied Bomba stool by Stefano Giovannoni.

This video was produced by Dezeen for Magis. All imagery is courtesy of Magis.

The post Konstantin Grcic speaks to Dezeen about his ‘intelligent’ Bell Chair for Magis appeared first on Dezeen.