Architecture studio Atelier Dau has created an infill extension with a perforated bronze facade for the refurbishment of a heritage-listed building in Sydney.

Chimney House was designed by the Sydney-based studio as two interconnected volumes after the owners decided to extend the existing house to create a gallery-like interior for their art collection.

The original three-storey brick terrace house was given a rear extension and an interior renovation, and an infill building was added on the vacant plot next to the house.

This holds a garage and a self-contained apartment hidden behind its perforated bronze facade with hinged panels that can open and close like shutters. 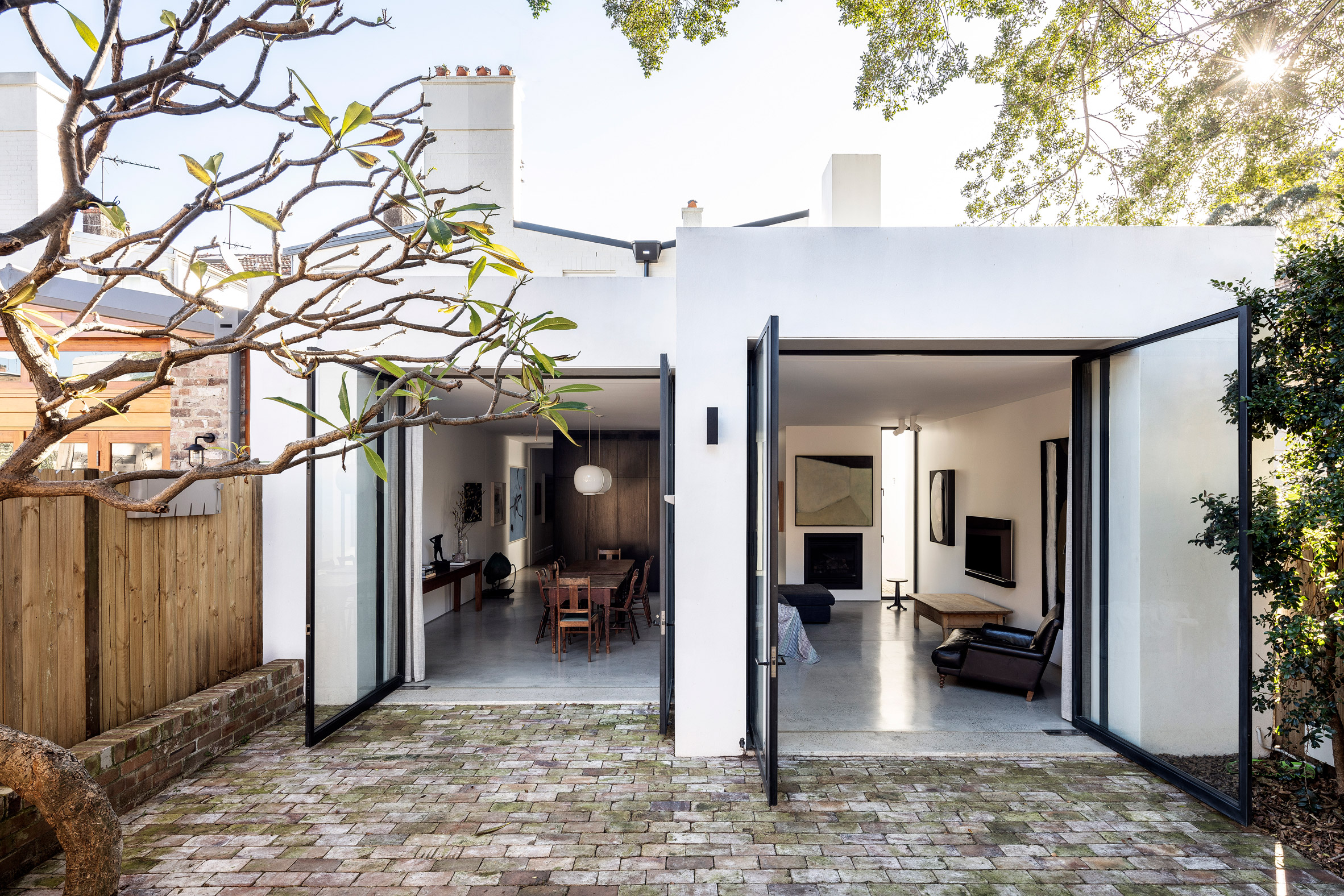 Only the facade and two front rooms of the terrace remain in their original state.

“The brief involved finding a solution for inserting a separate apartment and off-street parking upon the adjacent vacant block that was used for years as an exposed parking space,” principal of Atelier Dau Emma Rees-Raaijmakers told Dezeen.

The studio conceived of the existing house and the apartment as one entity and added the perforated bronze facade to the new build to provide a sculptural element. 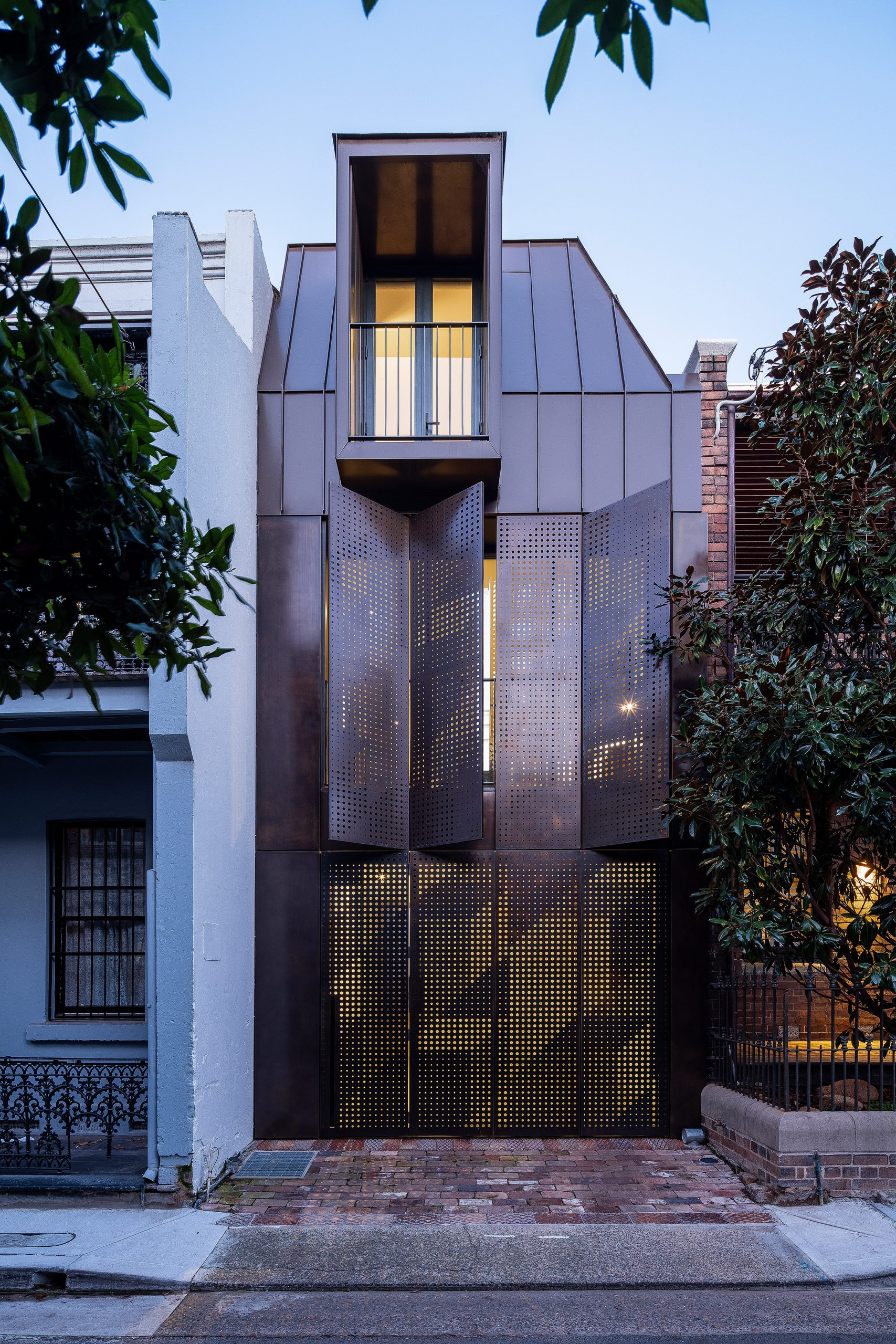 “The owners wanted the veneer of the new addition to read tonally as a consistent surface to the street’s terraced row. It’s a respectful but adventurous connection that will age gracefully,” said Rees-Raaijmakers.

“From a security perspective, it’s a fortress – a metal sheath with small perforations, yet they read artistically,” she added.

The screen’s bronze panels needed to serve a practical purpose as well as being decorative. “It’s a kinetic construct given that its shutters are operable and it incorporates a Juliet balcony,” the architect explained. 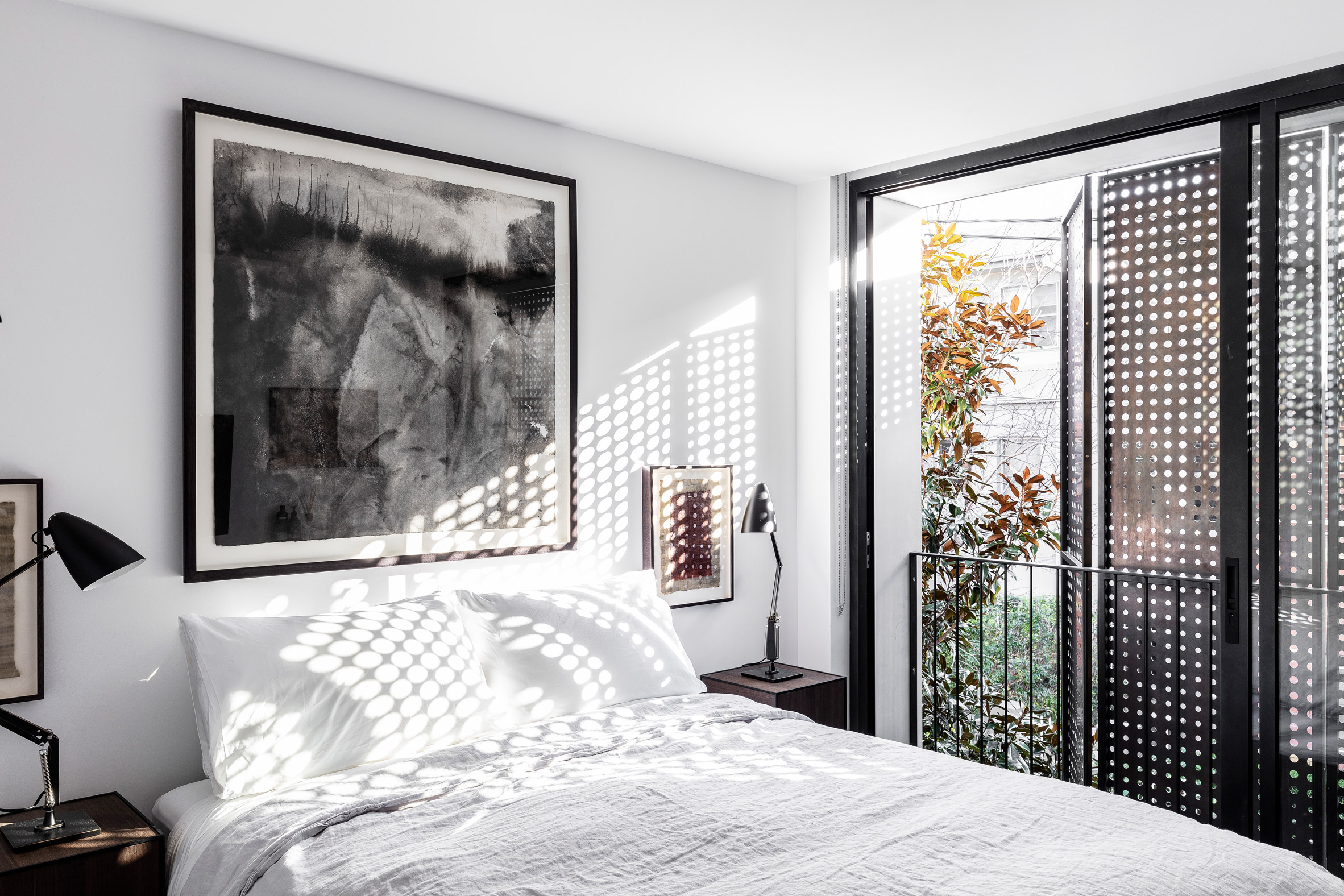 Rees-Raaijmakers’ aim was for the extension’s facade to give something to both the client and the inner-city neighbourhood it sits in.

“It’s like a theatrical scrim – its diagonal graphic, which is enhanced at night via internal lighting, subtly references the pitched roof outline of the street – a sculptural element to be appreciated by those who pass by,” she said. The perforated design of the bronze facade was also a nod to the bold diagonal floor tiling pattern in the terrace house’s stair hall.

Inside Chimney House, Atelier Dau worked with a restrained palette to serve as a backdrop to the clients’ art collection. 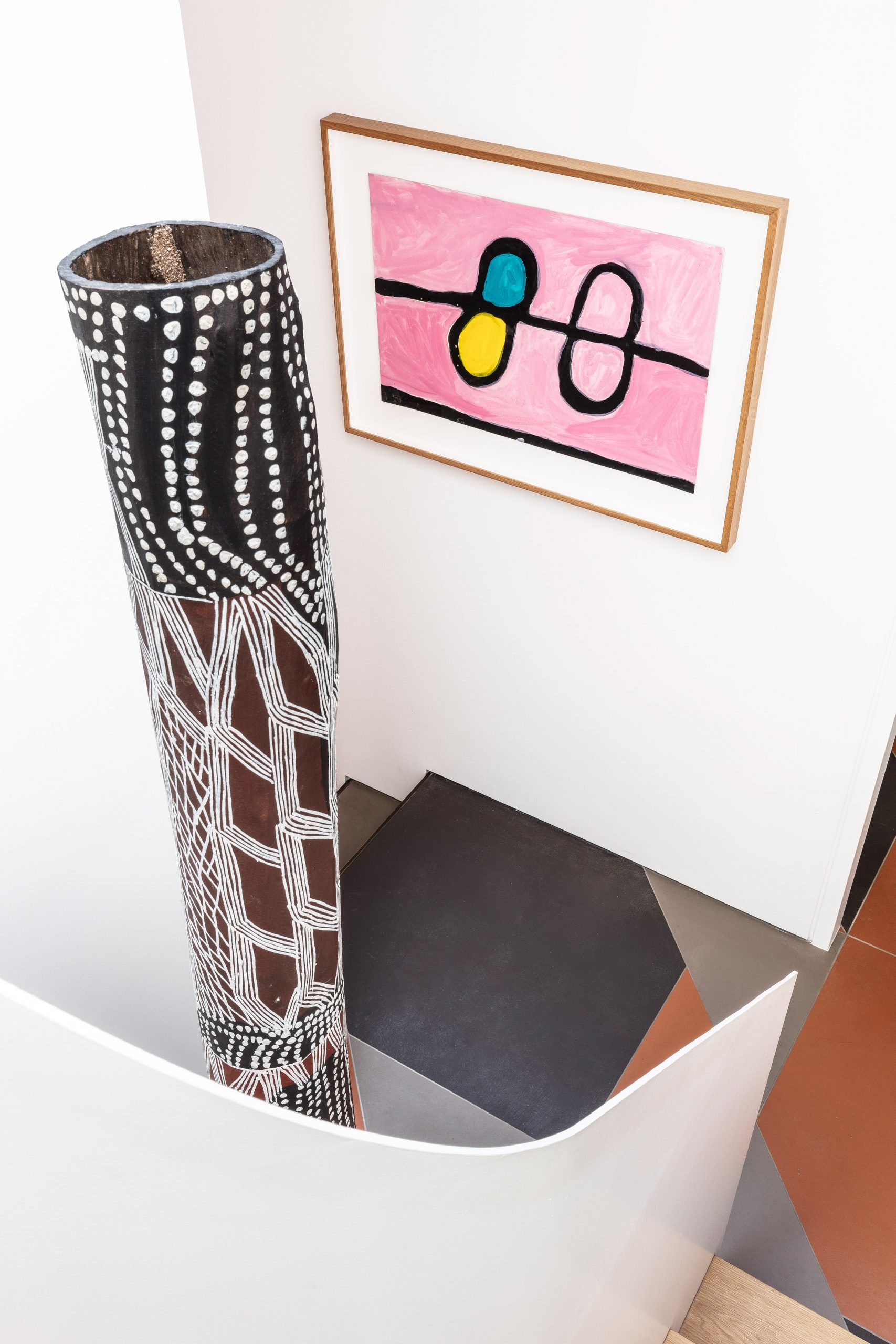 Some art pieces also influenced the design, including an Aboriginal totem that forms the central spine of the house.

Atelier Dau complemented the terrace’s original floorboards with polished concrete floors for the rear extension and used porcelain tiles by Patricia Urquiola to demarcate the combined laundry and bathroom.

The studio also installed a new central fireplace, with a chimney that informed the building’s name. 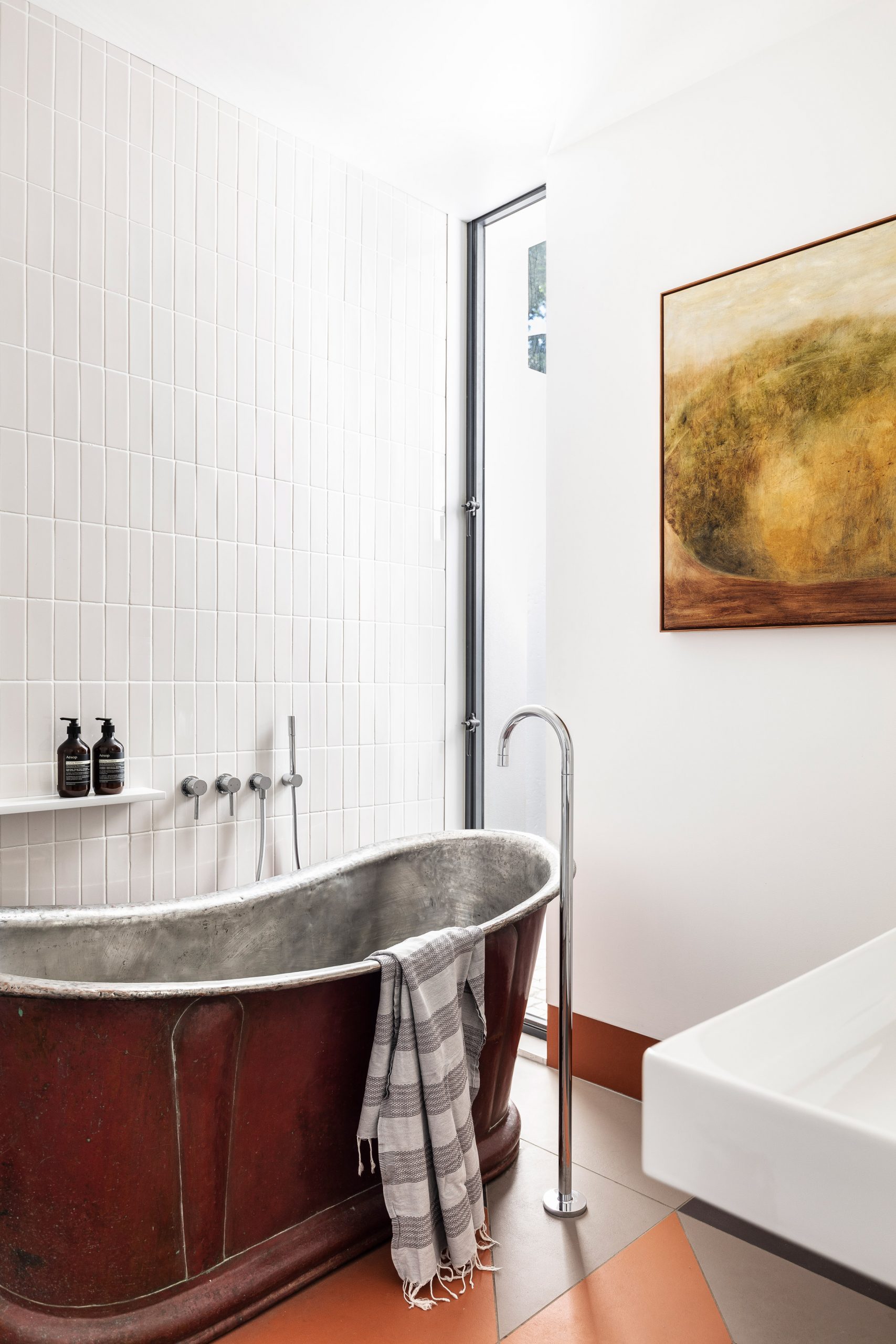 Upstairs, the ensuite bathroom in the apartment was given the same colour scheme and glazed a deep terracotta red.

The studio added upper-level windows that frame the clay rooftop chimneys on the neighbouring terraces, as well as windows to open the rear extension out towards a courtyard. A new, curved central staircase replaced the existing steep stairs.

Atelier Dau is a multi-disciplinary Sydney-based studio established in 2019 by Emma Rees-Raaijmakers.

Other designers to complete residential projects in Sydney include Welsh + Major, which designed a residential extension with patterned window screens, and James Garvan Architecture, which added timber-batten screens to a house in the back streets of North Bondi.

Photography is by Tom Ferguson.