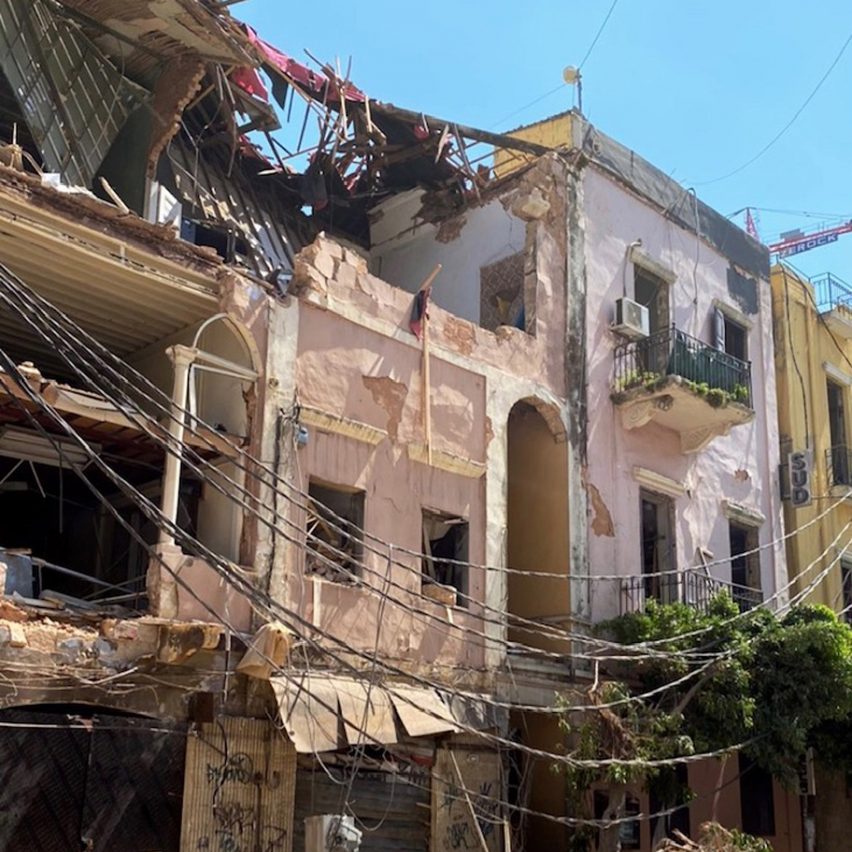 Architects and designers in Beirut have shared their first-hand accounts of the huge explosion that destroyed a large part of the city on Tuesday, with one describing the devastation as “beyond an apocalypse”.

“I thought it was a tsunami or a bomb, or even a nuclear blast,” said architect Lina Ghotmeh, who witnessed the massive explosion from a waterside cafe.

“No one can possibly imagine the scale of the disaster, it is beyond an apocalypse, the entire city is in rubbles,” said co-founder of design studio T Sakhi, Tessa Sakhi, who was at home when the explosion happened.

The explosion at a warehouse where 2,750 tons of ammonium nitrate was being stored on 4 August caused widespread destruction in the Lebanese capital.

It is estimated to have killed 149 people and injured more than 5,000. Local architect Jean-Marc Bonfils was among the dead.

A number of buildings in the city were also destroyed or badly damaged, among them Pierre Neema’s 1965 headquarters for power company Électricité du Liban and the Sursock Museum.

“I honestly still don’t believe we are alive”

“Since it happened by the seaside, the explosion was very powerful,” Ghotmeh told Dezeen. “You could feel that the water had actually taken on a lot of the charge of the explosion.”

Ghotmeh, who was shortlisted for a Dezeen Award in 2018 and had just completed her first project in Beirut, was sitting in a small cafe by the water across from the part of the port where the incident occurred when the warehouse exploded.

“What was really surprising were the red fumes coming out of the water,” she continued.

“It was surreal because you couldn’t understand if it was bombardment from a plane, a natural event, or something chemical because the fumes were a completely different colour. I thought it was a tsunami or a bomb, or even a nuclear blast.”

Ghotmeh stayed on the scene with her son and her family in the aftermath of the explosion.

“You just stay in place because you don’t know what’s going to happen – having left the war, in these events, one bomb happens and then you expect another, so you stay in place and wait to understand what’s happening,” she explained.

“Then you discover the consequences,” she continued. “My sister’s home was completely shattered, my eight-year-old nephew was hit by shattered glass. My partner’s office completely collapsed – the false ceiling was ripped off and four-metres high glass panels were shattered.”

“I was there just 30 minutes before the explosion and I honestly still don’t believe we are alive.”

Beirut-based architect Sakhi, who was in her house four kilometres away from the explosion, thought that she was witnessing an earthquake.

“I thought it was a strong earthquake and since I live in a typical old Lebanese house, I was afraid it might collapse,” she told Dezeen.

“I grabbed both my dogs and the next thing I remember was a massive sound of an explosion,” she said. “My windows exploded, glass shattered everywhere, ceilings and walls were falling, objects exploded, and there was immense smoke.”

Sakhi tried to get to the only room in her house without windows, something she says her parents taught her and her sister during the Lebanese civil war, but the ceiling had fallen.

“Every single person in the city and outskirts had a near-death experience and is suffering from physical injuries and emotional trauma,” she explained. “Physical and psychological scars we will carry for the rest of our lives.”

“The scale of the explosion and the amount of damage it has caused will take years to rebuild.”

Ghotmeh recently completed her first project in Beirut, the Stone Garden housing complex, which is located about a kilometre from where the explosion occurred.

“The next day I went to the site immediately,” the architect said.

“I was shaking because it’s close by and I didn’t know what to expect. And it was there, just standing, but all the glass had shattered completely. It’s like a nuclear bomb happened.”

Only a few apartments were occupied, and the tenants and people working on the project had all escaped unharmed.

Ghotmeh had intended the building to be a bunker or protective shield for the city. “As a child here, you grew up with the city completely destroyed and being reconstructed,” she said.

“It has always been able to rebuild but that always a part of the feeling and I wondered, how can architecture be a place of shelter?”

Lighting designer PSLab said that its Beirut headquarters, which includes one of the city’s only Bauhaus buildings was been completely destroyed.

“PSLab Beirut HQ is gone, completely wiped,” said Abboud, communications director of the lighting brand. “One of our buildings is one of the only remaining Bauhaus buildings of Lebanon. Structurally it is not salvable.”

According to Abboud, much of the neighbourhood surrounding the headquarters was also destroyed, but she was confident it would be rebuilt.

“Our neighborhood has a small gem collection of old Lebanese houses – they are mostly gone,” she continued. “It will surely rebuild. We will rebuild. But the old Mar Michael and Gemayze neighborhood is forever gone.”

In the aftermath of the explosion the people of Beirut have come out to help get the city back to normal, but there is also a lot of anger among residents.

“There is a lot of anger as well, against the government and against the negligence that has been happening,” said Ghotmeh. “People want to change that.”

Abboud added that she was “angry” as “for five years we have been working with those dangerous chemicals under our noses.”

According to Sakhi there is little sign of help from the Lebanese government on the ground.

“The French and German aids are present, yesterday the French president was amongst us on the streets,” she said. “But none of our so-called Lebanese authority aids, and a government we have been revolting against since our Revolution in October 2019.”

People are devastated, she added. “Our homes were our only safe haven from such an unstable country, now we are left with nothing. Grief and mourning, for the friends and family we lost and got injured. And anger. Massive anger towards our corrupt government for their 40 years of murders and criminal acts.”

The explosion ravaged some of the city’s most important and historical architectural landmarks, as well as museums, galleries, residences and residencies.

“They survived the 15 years civil-war but did not survive this explosion, that is how strong it was,” said Sakhi. The structural, electrical, mechanical and plumbing works are just inconceivable at this moment due to our financial and economical crisis. We do not have any money whatsoever to buy nor import anything.”

The post Beirut explosion was like a “nuclear blast” say Lebanese architects and designers appeared first on Dezeen.