Simon Pole and Annabel Dundas design their own home in Melbourne 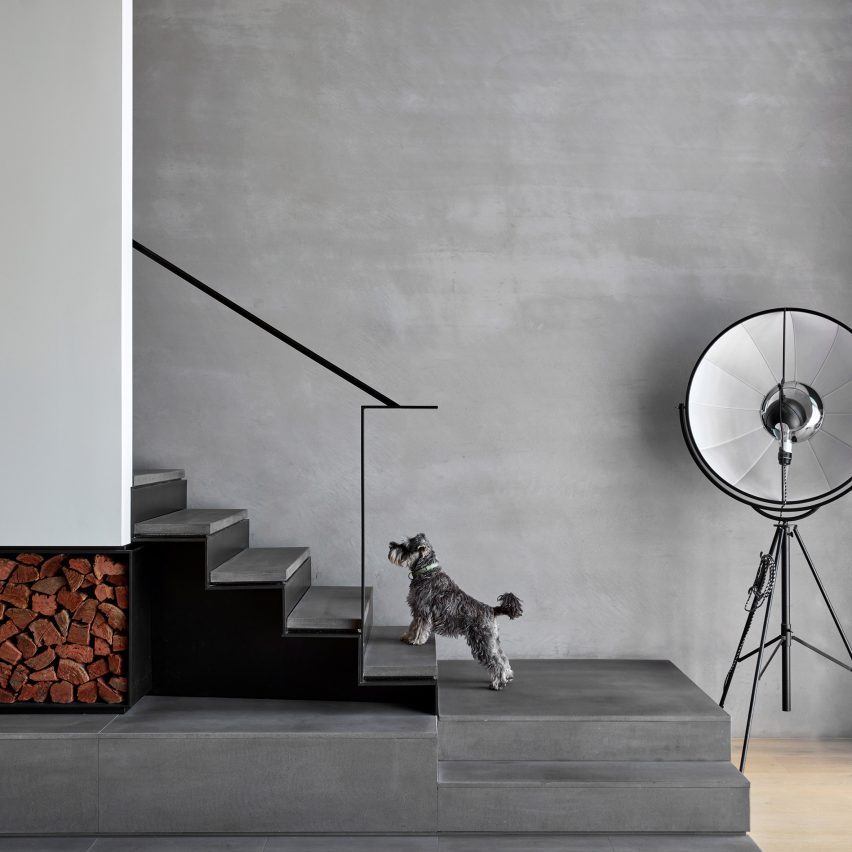 Design director Simon Pole and graphic designer Annabel Dundas have built their own home, named River House, in Melbourne around their collection of art, sculpture and furniture.

Set on the bank of the Yarra River, the house was also designed around outdoor activities for the couple’s children, with a swimming pool, basketball court and boat deck providing access to the water. 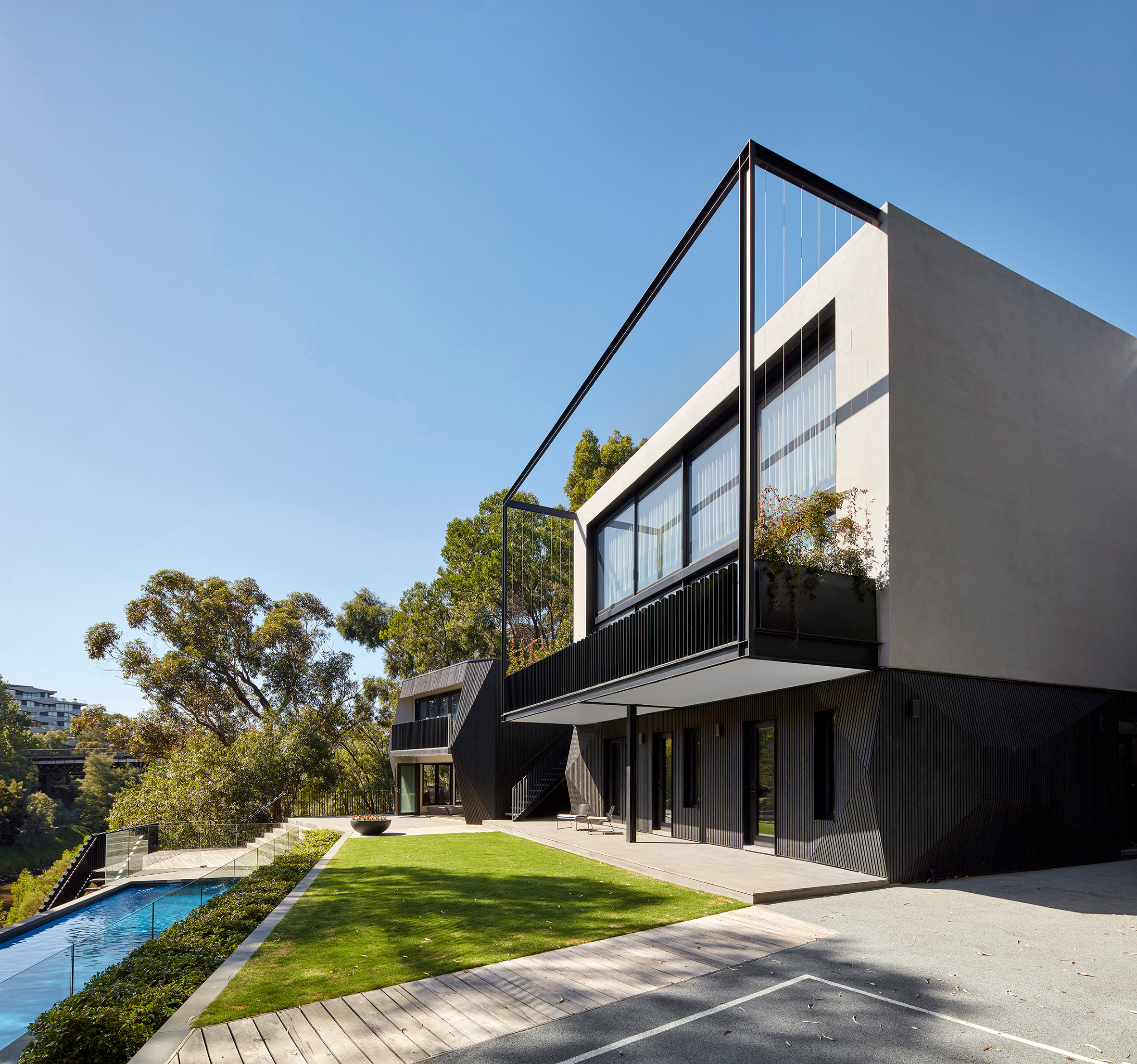 “The setting of the house is very special,” Pole told Dezeen. “Tucked down on the river within a natural setting only three miles from the city with very few references that it is in the inner suburbs.”

River House stands on the site of a 1990s house that Pole and Dundas knocked down to make way for their home. To keep within planning regulations they shadowed the footprint of the former structure but added a small rear extension and more ceiling height to create extra space. 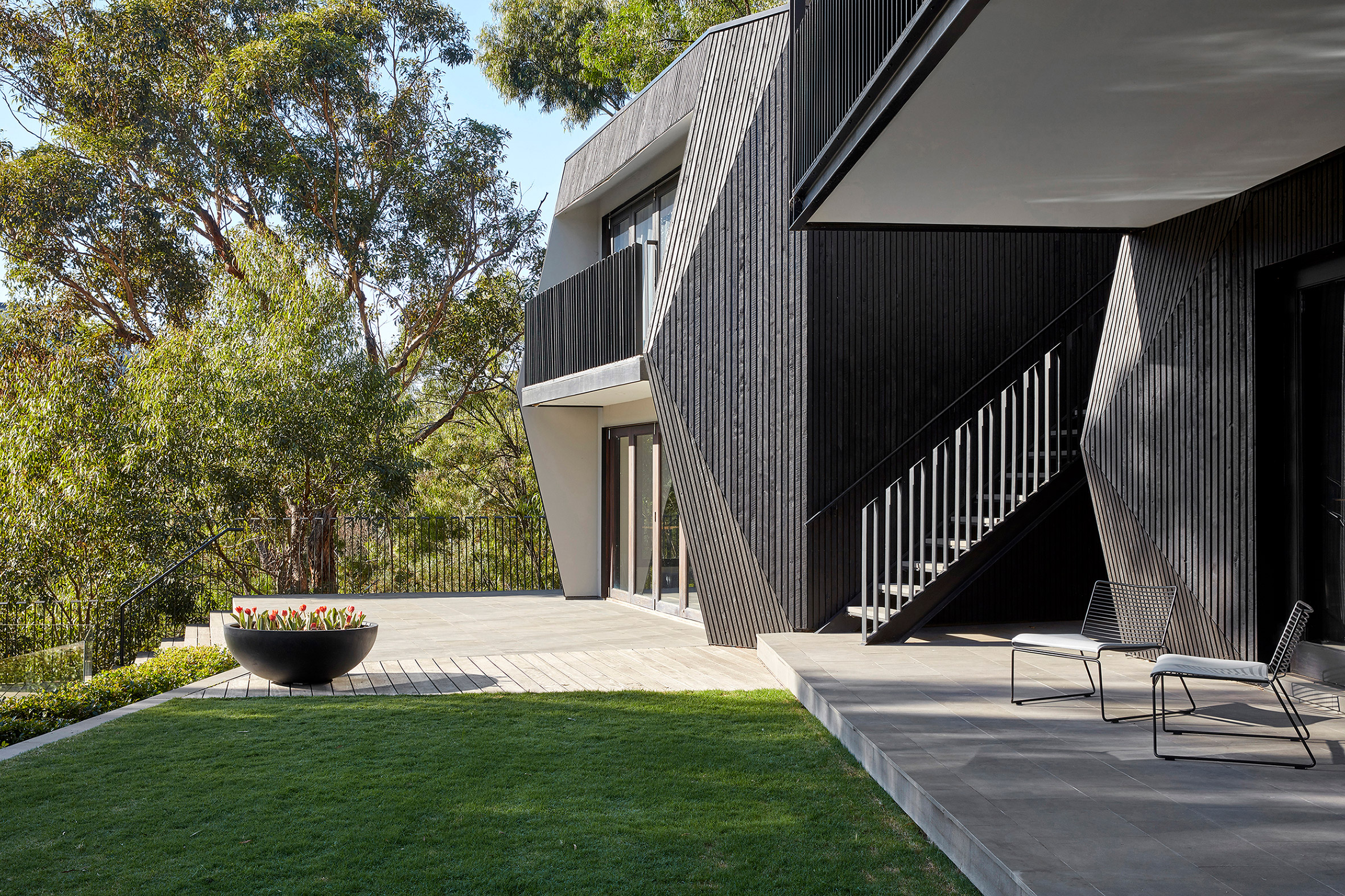 Built on a slope of 30 degrees, the site is divided into terraced levels with the three-storey house at the top and a series of lawns and decks leading down to the river.

Pole and Dundas decided to clad the lower half of the facade in blackened cypress to compliment the deep grey interiors, where the use of the slim dark timber slats continues. 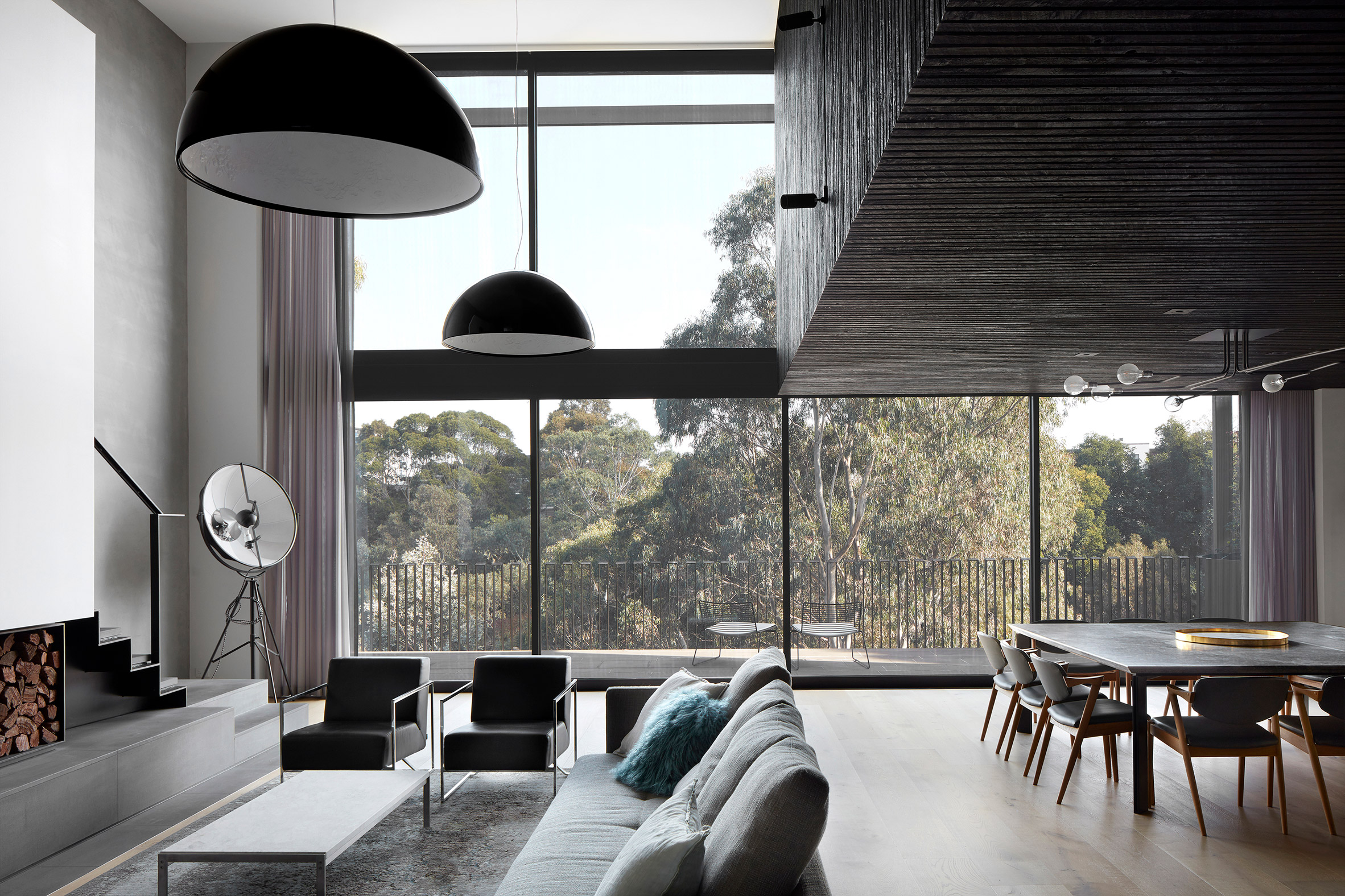 “The 5.8-metre-high glazed openable facade allows abundant light deep into the living areas counteracting the fact that the rear of the house is cut into the steeply sloping site,” said Pole.

“This allowed us to use materials such as the black cypress, concrete, bluestone and black steel. This would typically create darker moodier spaces but with specialist lighting, it emphasises the artworks.” 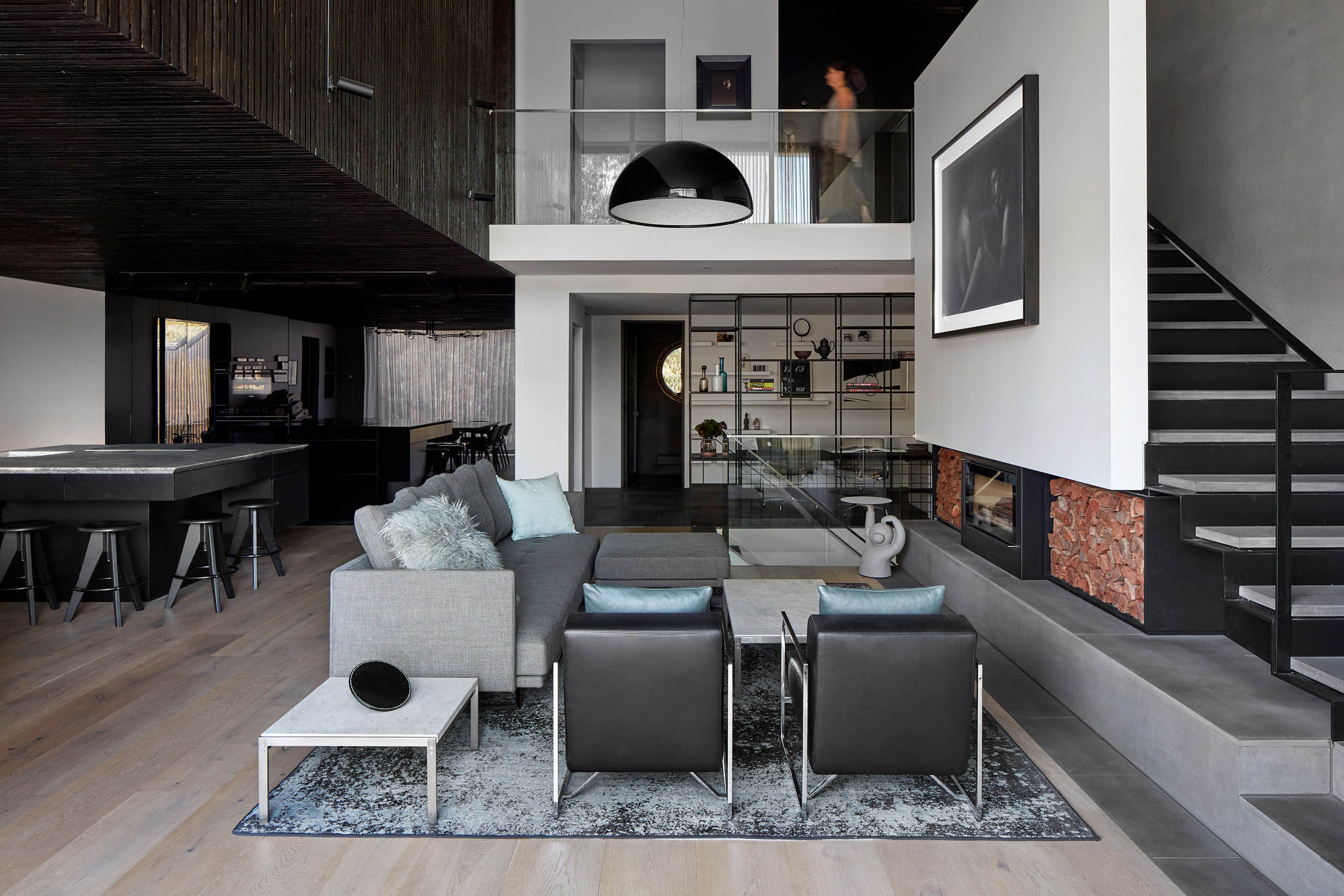 The couple started their art collection 20 years ago in LA when they purchased an original 1950s Eames RAR Rocking chair at an auction. Now they have a custom-designed house in which to display it all.

River House is set over three levels, connected by staircases to a central double-height space where the main part of the art collection is displayed. 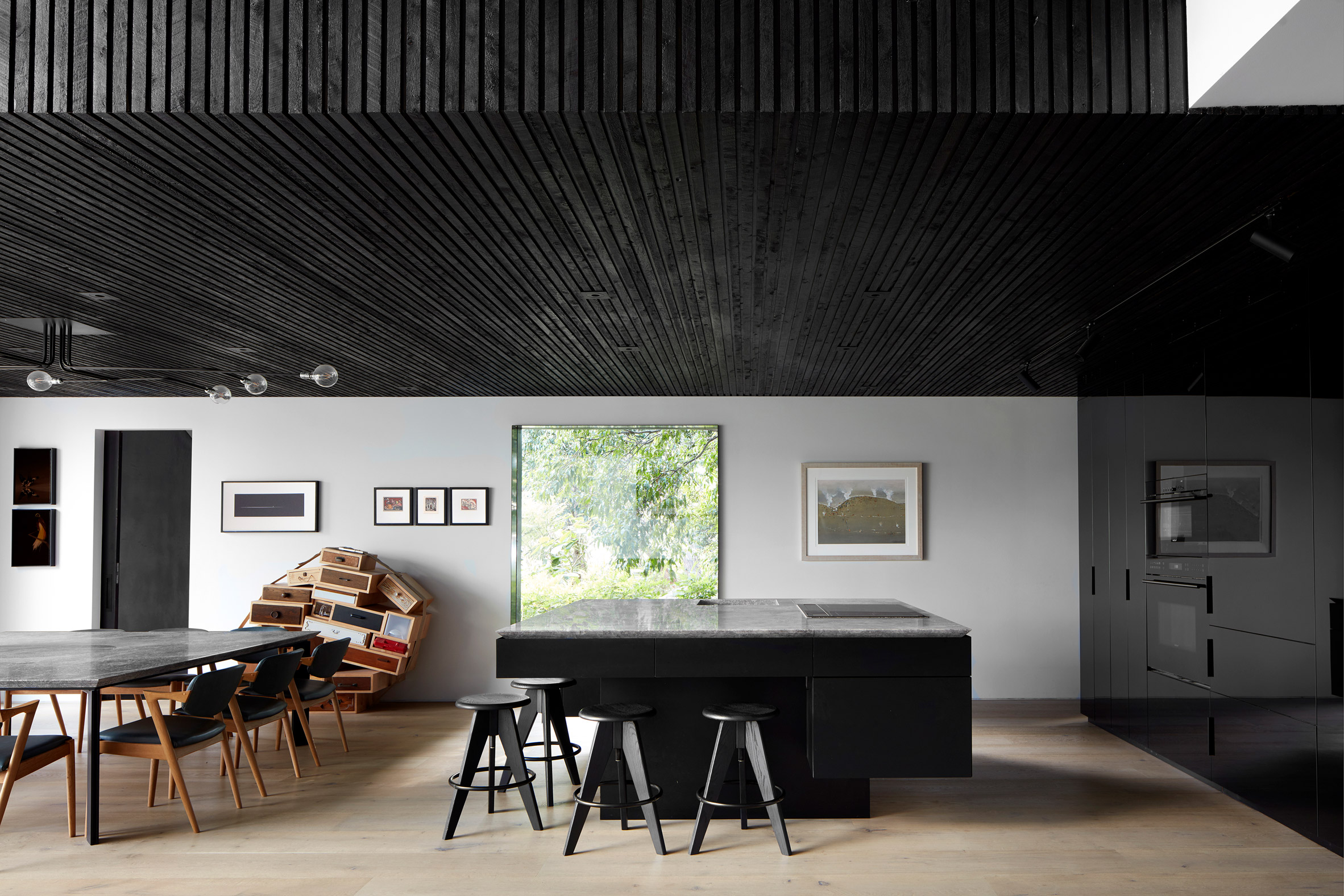 The house’s main entrance is located on the upper level, where the main bedroom with its own ensuite bathroom and dressing room is also located.

The top floor overlooks the double-height middle floor of the house, which is an open plan area for entertaining including a lounge, dining space and an open kitchen with a pantry and wine cellar attached.

A balcony on this floor extends the lounge area and offers views over the city. This floor also has a book-lined library space and a guest bathroom. 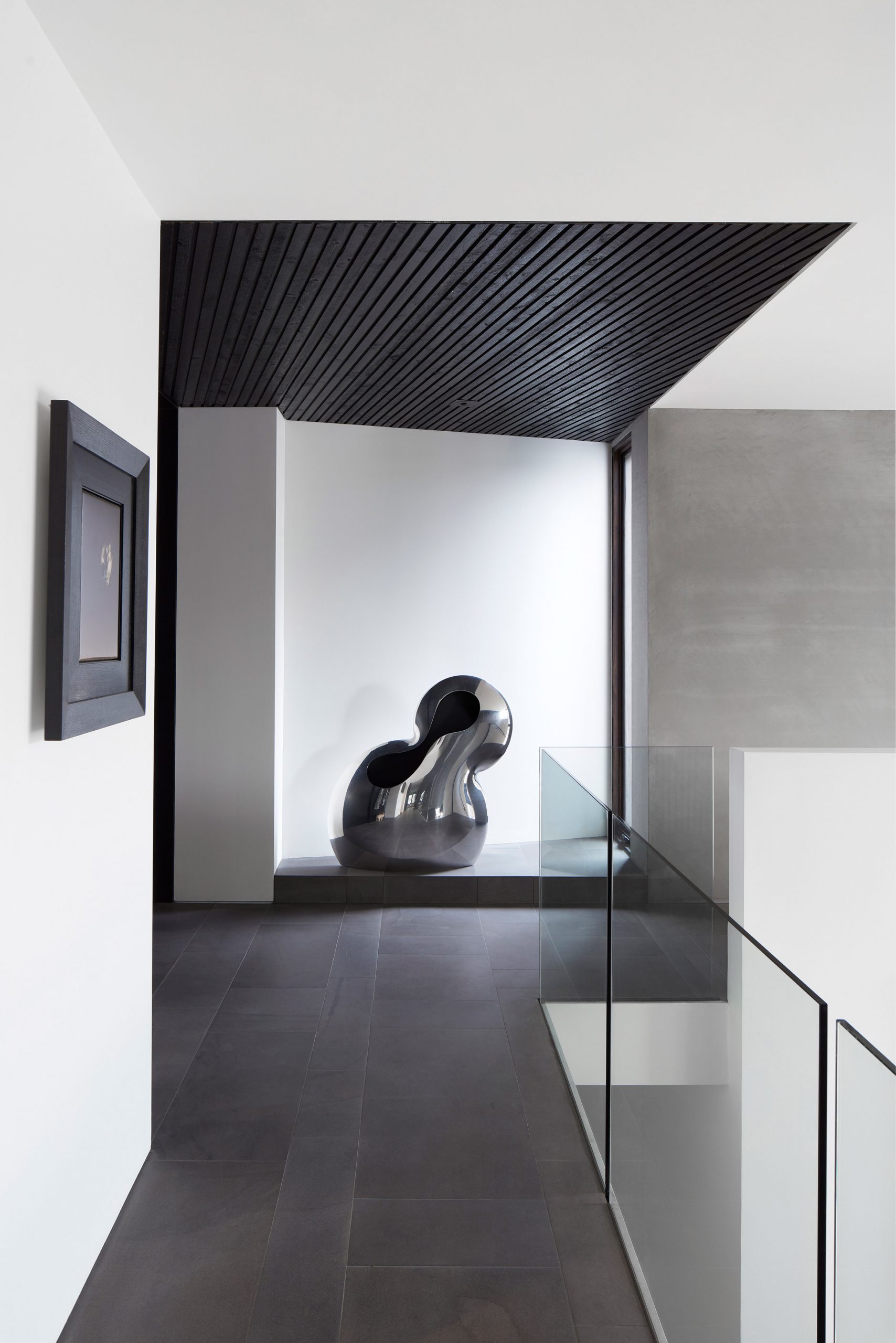 The lowest floor is dedicated to the couple’s children, with a trio of bedrooms, a media room and a billiards table, with access to the garden and the river beyond.

“Initially we planned for safety and security for a young family but accepting that the children will grow into young adults requiring different types of spaces the design evolved to ensure that we could enjoy this home for as long as possible,” said Pole. 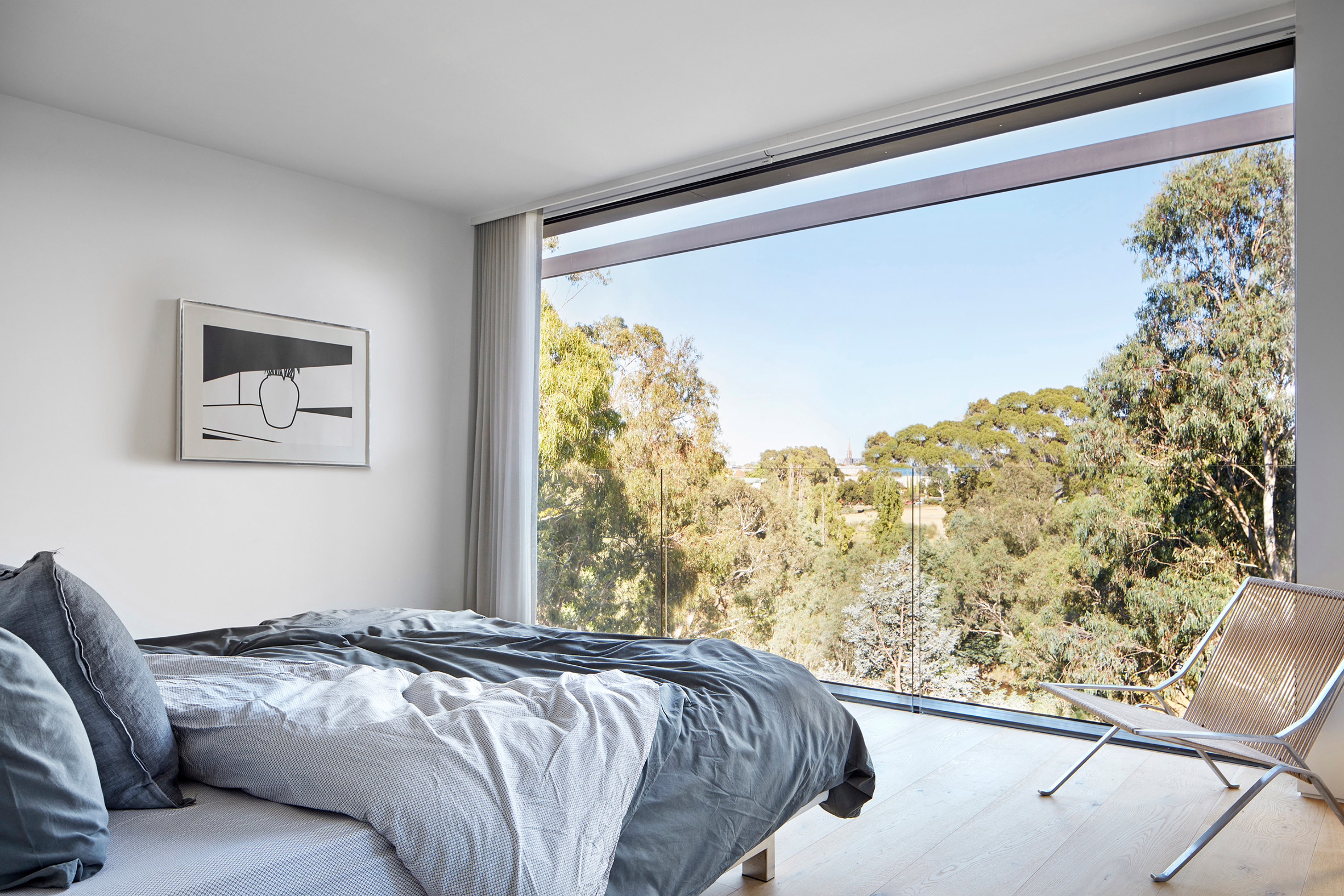 River House is attached by a covered bridge to a second building, also clad in cypress and affectionately nicknamed the Treehouse. This converted garage was where the family lived during the work on the main house.

“It was a way to sell it to the children as we happen to be reading the treehouse series of books by Andy Griffiths when we started the renovation and wanted to soften the blow of living in a one-bedroom space for 14 months while we built the house,” said Dundas. 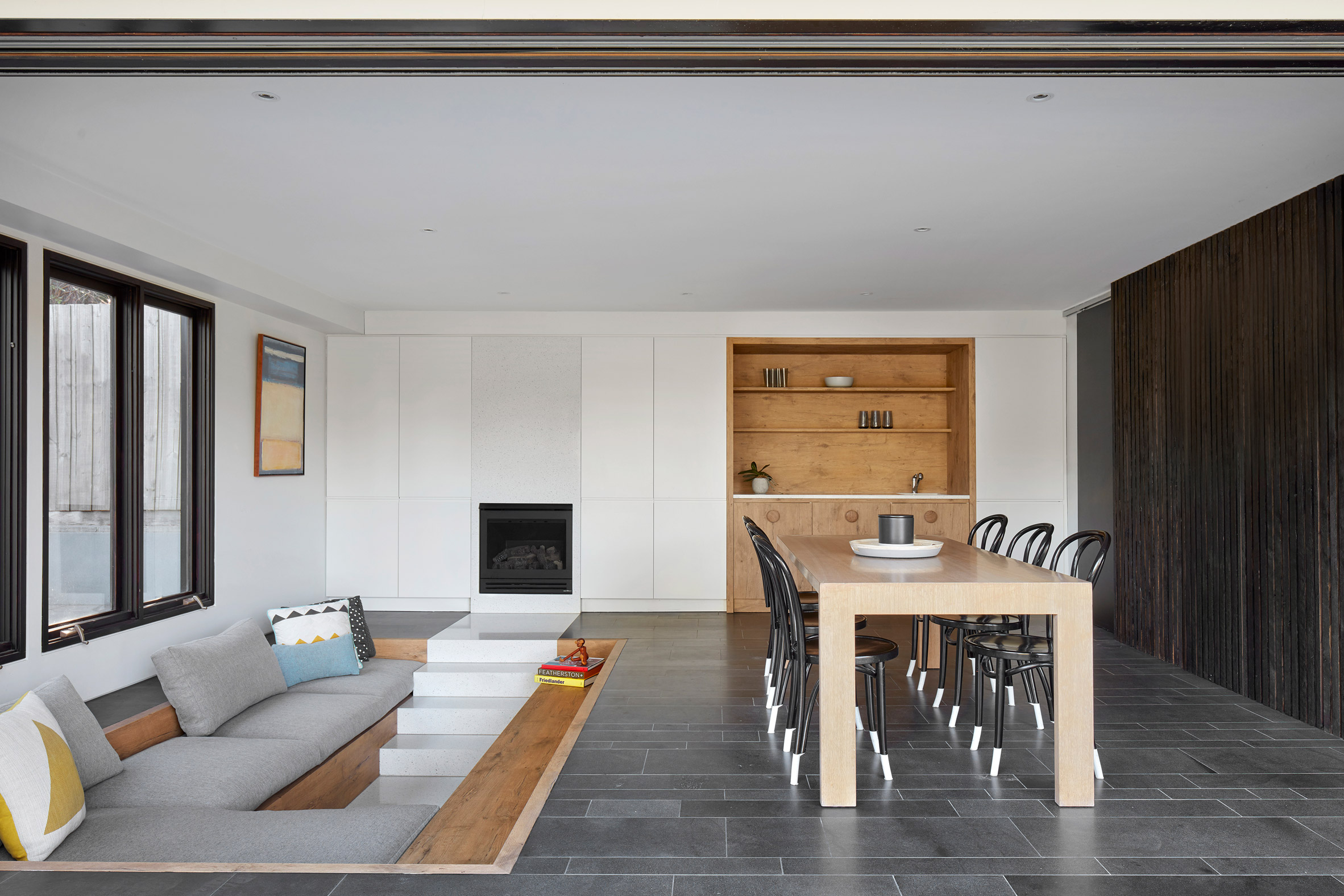 Now the Treehouse functions as a separate guest house, with a kitchenette and a sunken lounge with a fireplace.

Upstairs, where the bridge connects, there’s a bedroom with a study nook and a bathroom. 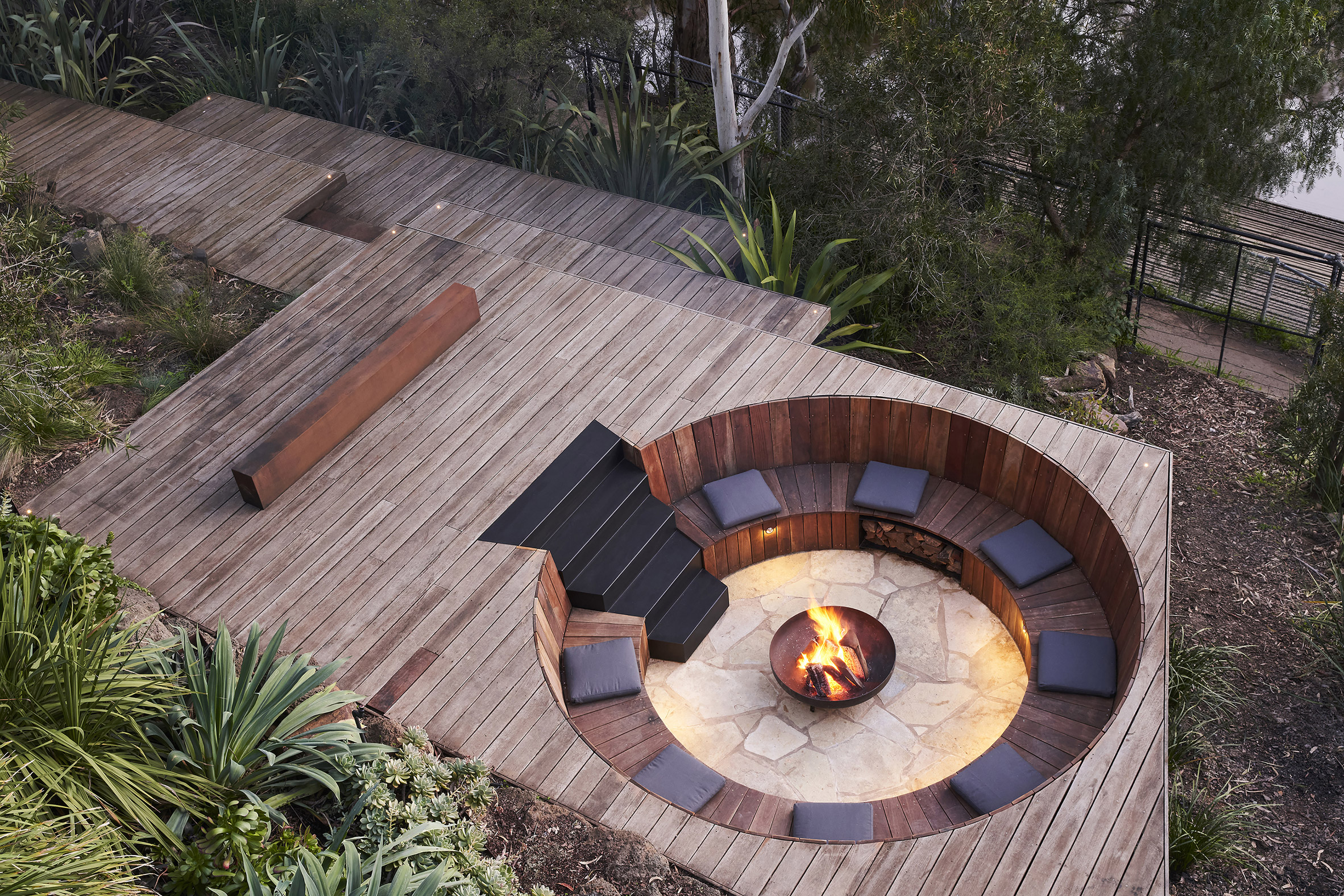 Along with the pool and the basketball half-court, the family can use the jetty to launch kayaks and paddle into the city. The gardens include a sunbathing deck, a vegetable garden, and a circular sunken conversation pit around and outdoor fireplace.

Winter Architecture also used a striking black facade for a townhouse renovation in Melbourne, while Studio Four built a house for its director around a planted courtyard.

Photography is by Damien Kook.

The post Simon Pole and Annabel Dundas design their own home in Melbourne appeared first on Dezeen.