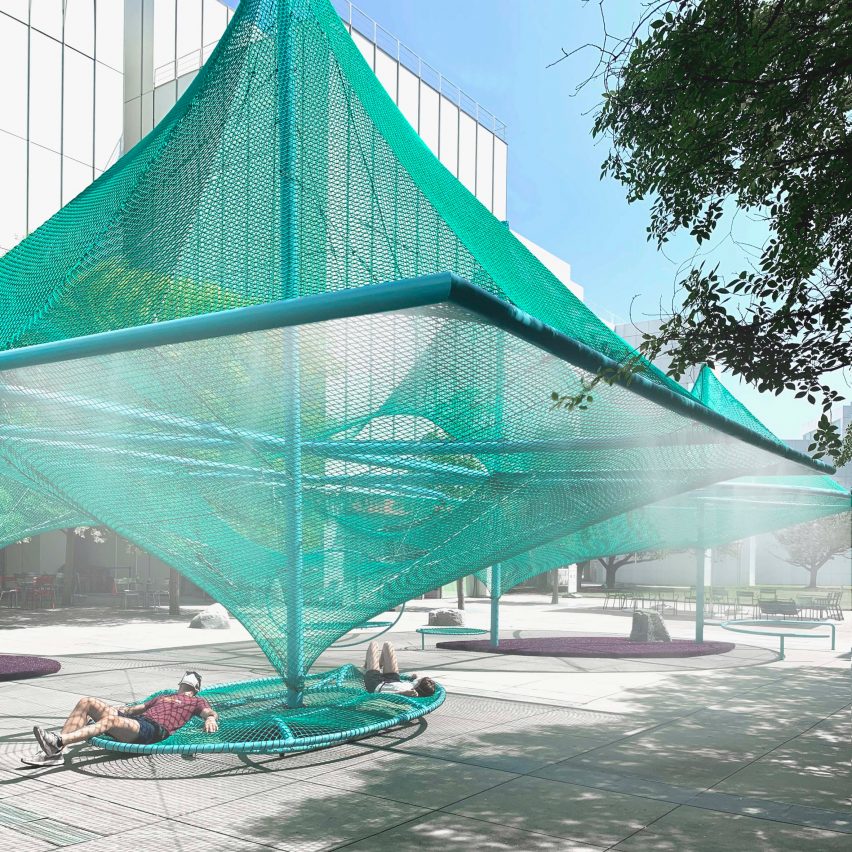 Architecture studio SO-IL has built a green-mesh structure with suspended seating in this installation on the Renzo Piano-designed plaza of the High Museum of Art in Atlanta.

SO-IL created the structure to temporarily occupy the plaza in front of the extension that Italian architect Renzo Piano added to the High Museum of Art in 2005. 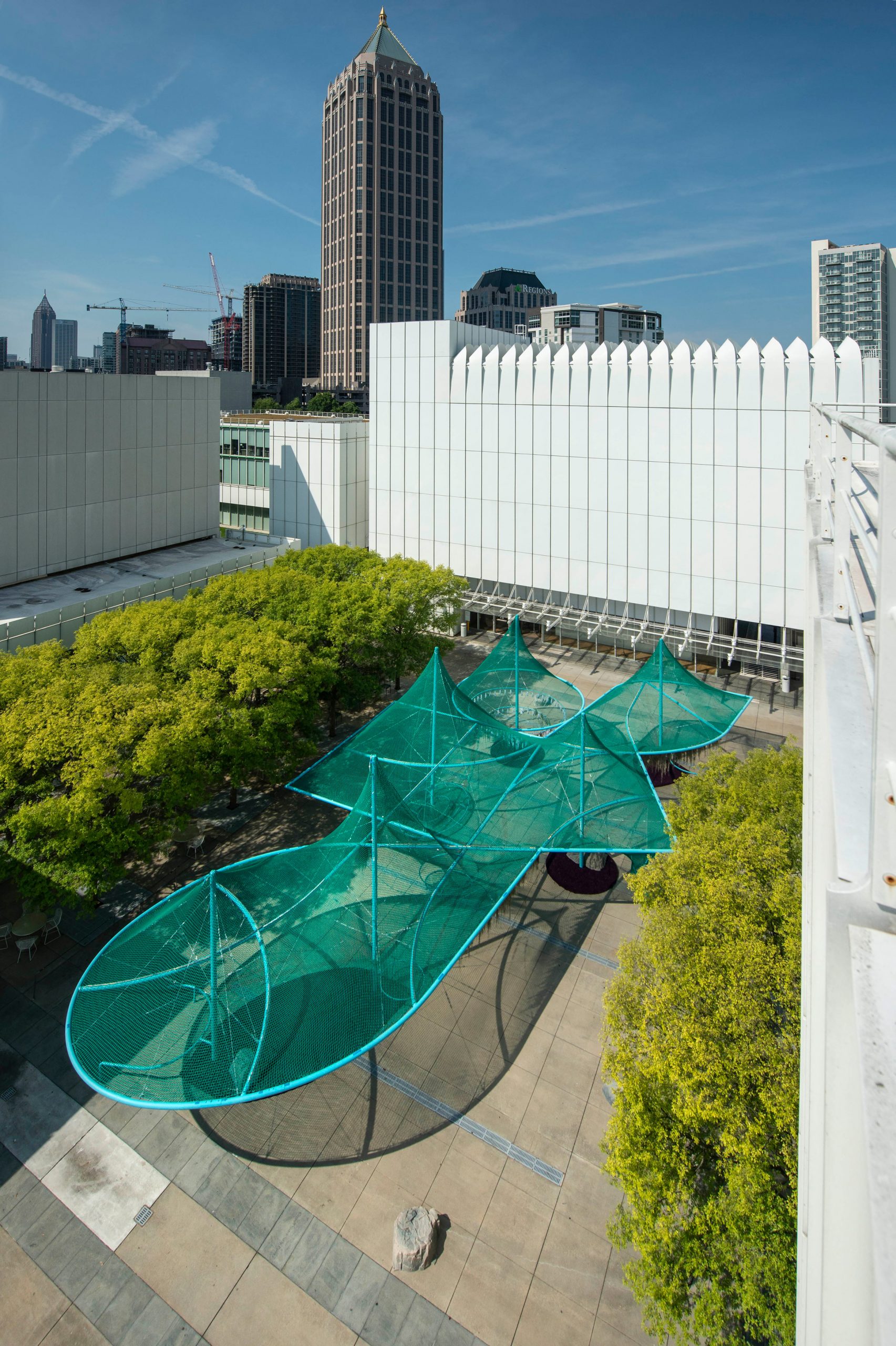 Green agricultural netting is pulled taught over a six green metal poles and stretched across curved metalwork to create a canopy that shades circular hammocks suspended beneath.

The shape of each canopy – which tapers in at the top and the bottom – is intended to reference that of trees. Plants are then woven throughout the netting. 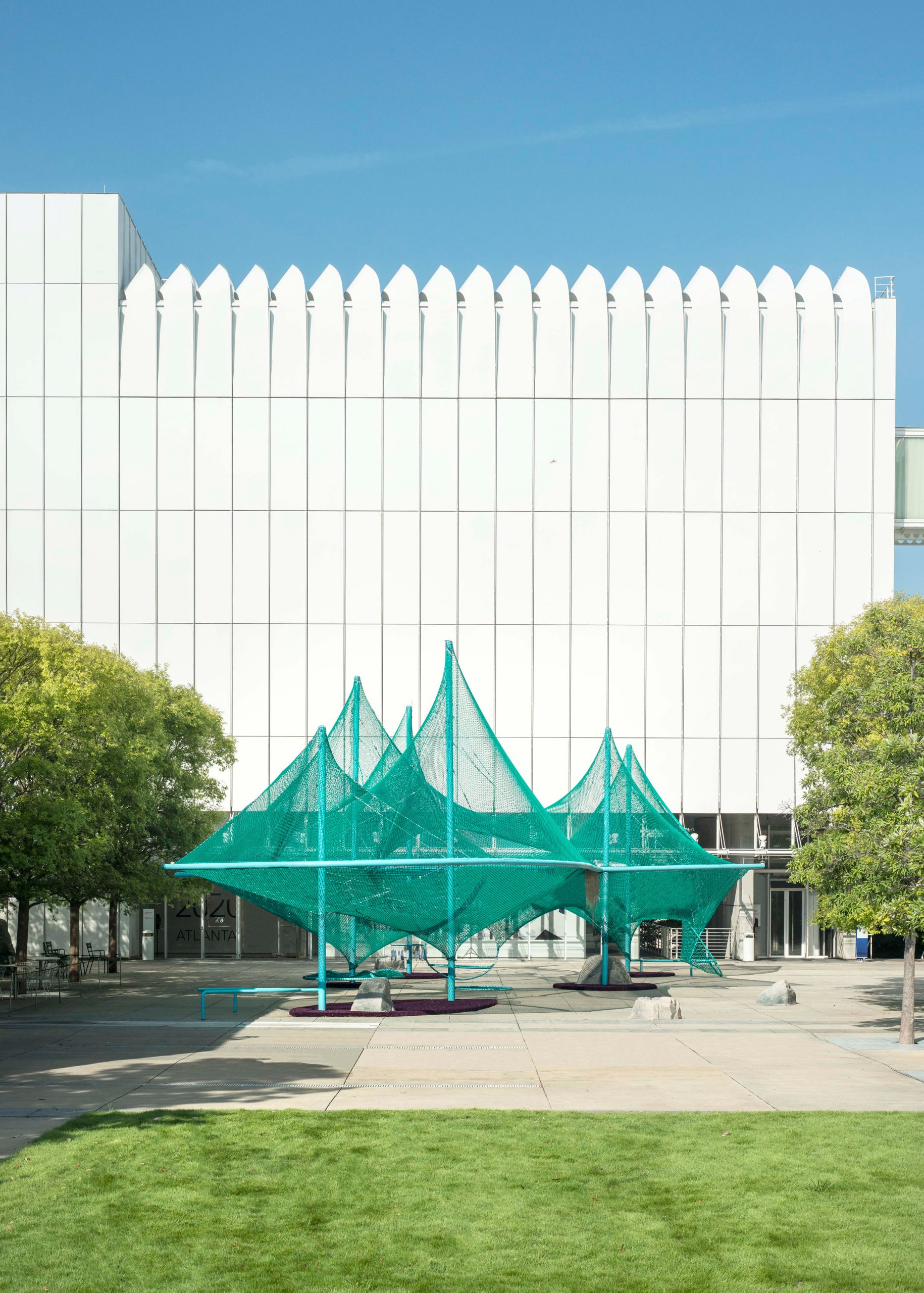 “As they cross the Piazza, guests are enveloped by a foliage-filled mesh canopy suspended from a steel framework, evocative of the tree canopies found throughout the region,” SO-IL told Dezeen. 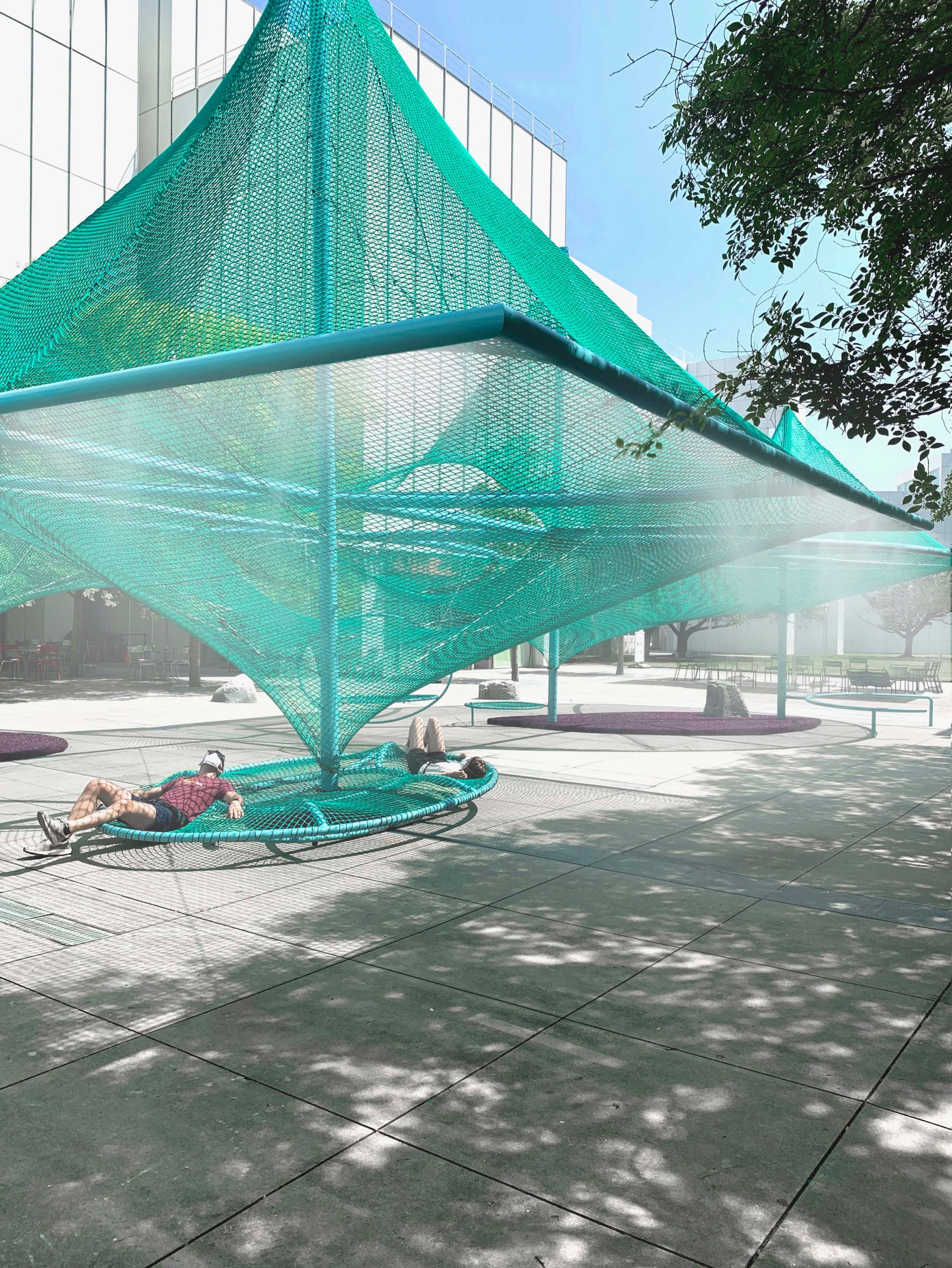 The New York studio, which is led by Florian Idenburg and Jing Liu, came up with the installation as part of its effort to give migratory birds a place for respite in the city. Its shape and name draws on a Murmuration, which is when a huge flock of birds flying together and form different patterns, and is decorated with bird feeders.

“Using the lens of bird migrations, it reacts to Atlanta’s relationship with the natural world,” said SO-IL. 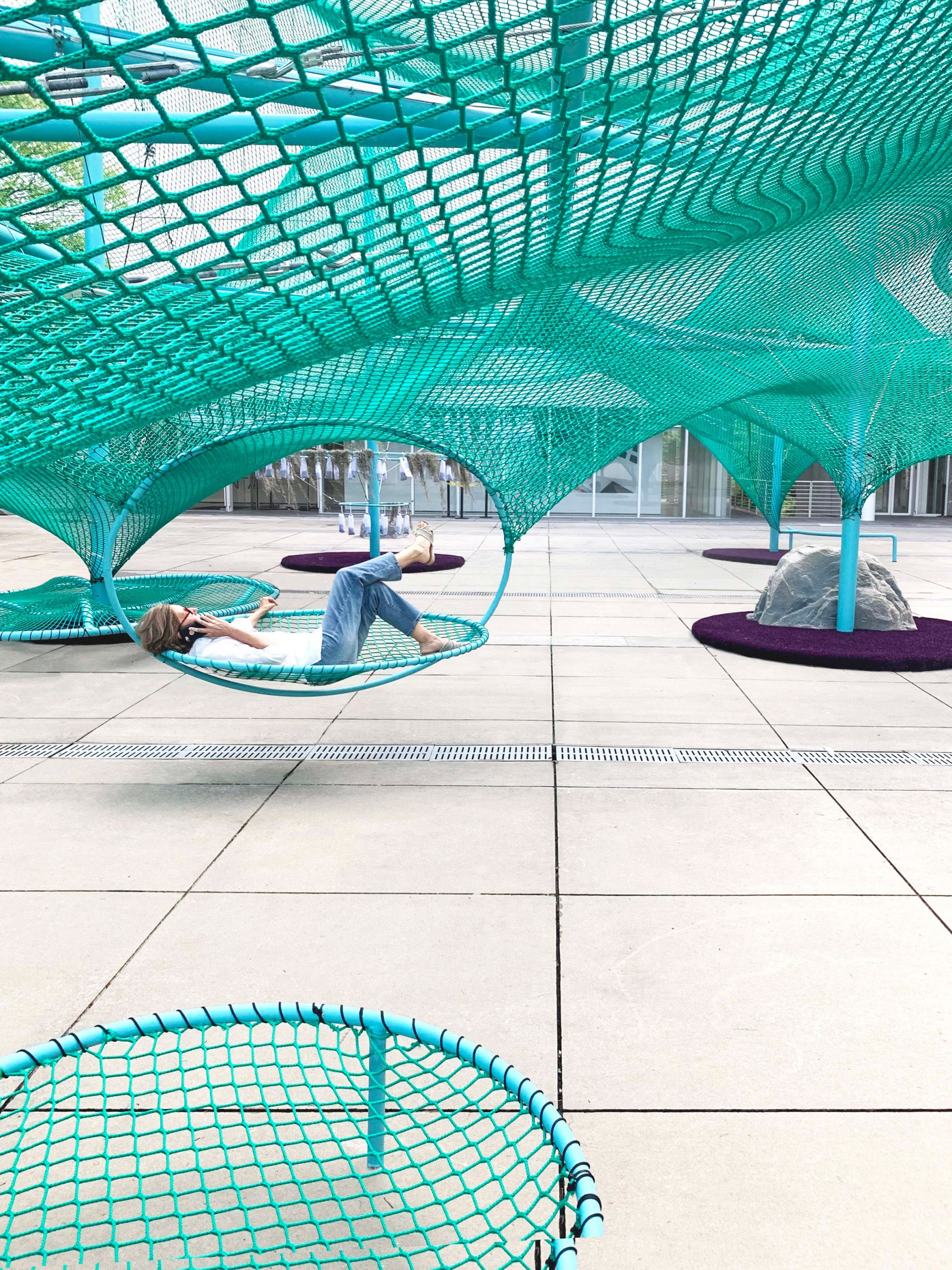 “Creating a sustainable future for Atlanta includes maintaining or increasing the number of trees,” it added. “In its title and concept, ​Murmuration​ also directly advocates for conservation efforts toward birds, questioning their loss and the terms for our future environment.”

In addition to seating for museum visitors, Murmuration also features bird feeders hanging from its frame. 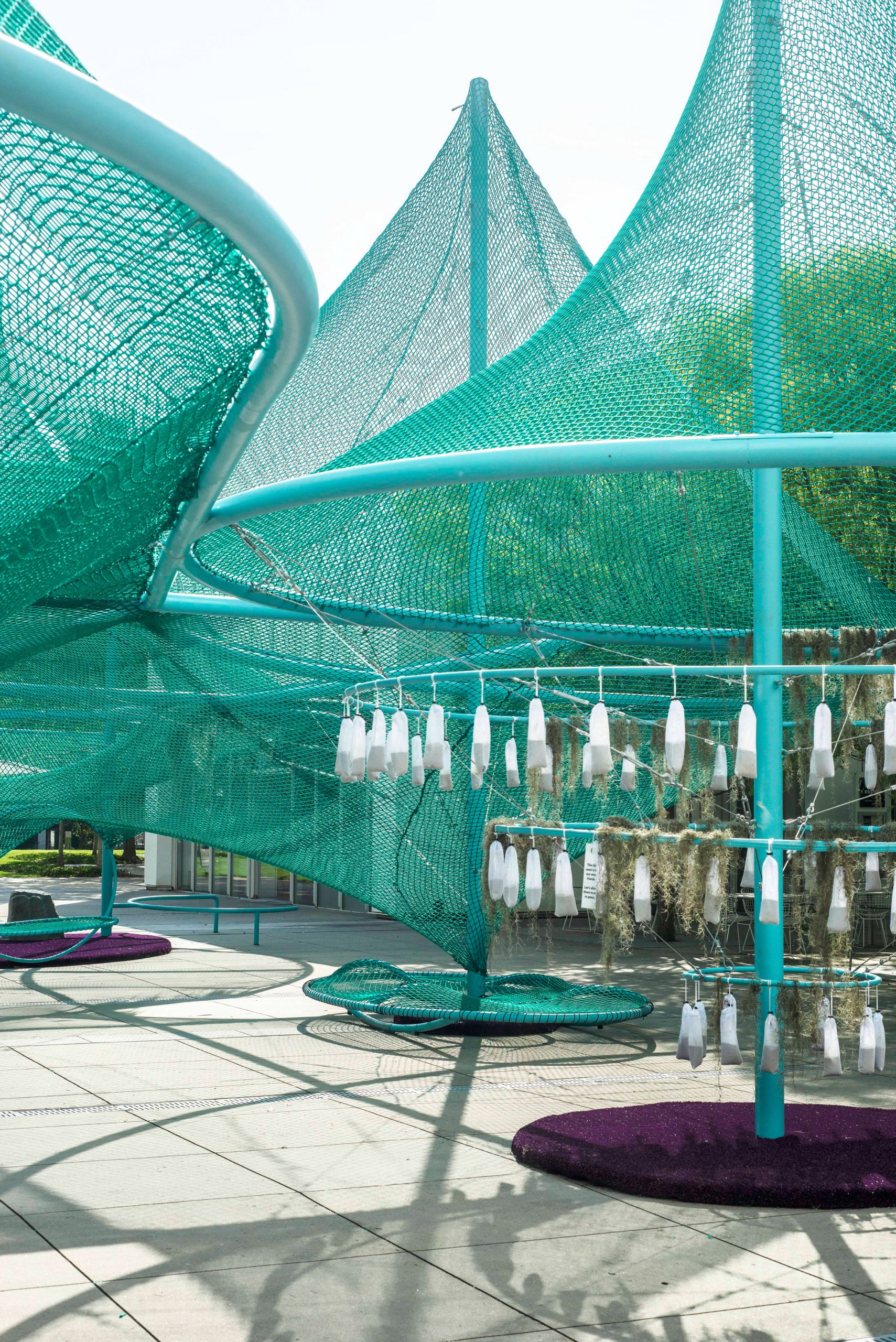 SO-IL worked with local engineers Uzun & Case to complete the design of the 218-square-metre structure, which was fabricated in Mexico and then transported to site.

The intention is that it can be disassembled and installed elsewhere following its stint at High Museum of Art, which ends in November 2020. 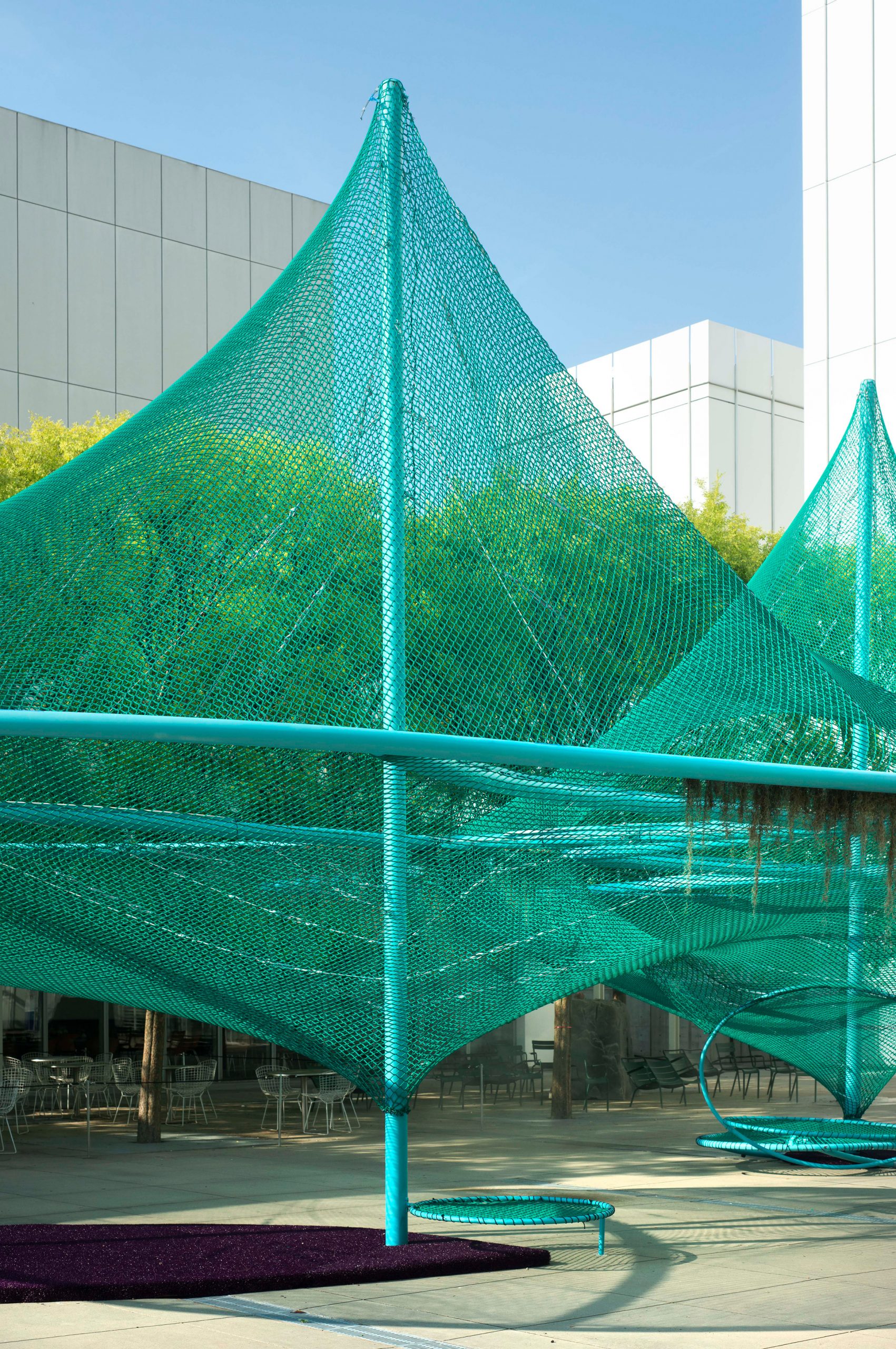 Idenburg and Liu founded SO-IL in New York in 2008 in New York. Its other temporary projects include an installation in Columbus that covered 130 trees in pink, yellow and blue nylon webbing and a performance piece that created air-filtering mesh costumes capable of cleaning air through breathing.

Photography is by Fredrik Bauer.