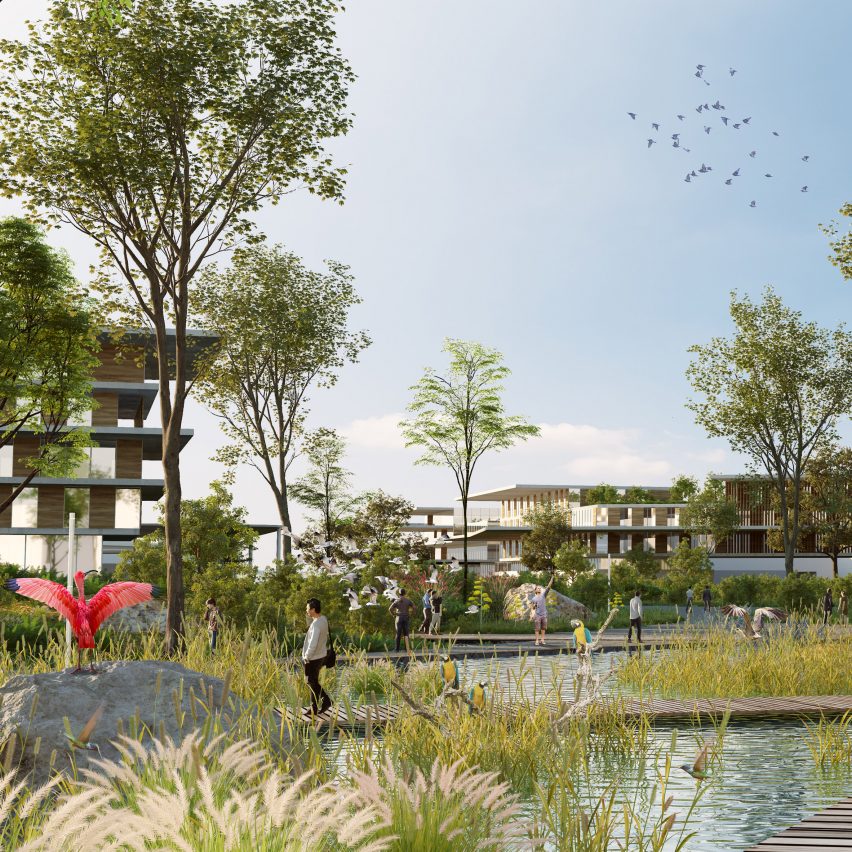 Italian architect Carlo Ratti has designed a masterplan for a high-tech innovation district in Brasília that will be an extension to the Lúcio Costa and Oscar Niemeyer-designed city.

The one-million-square-metre district called BIOTIC will be located at the northern tip of the Brasília UNESCO World Heritage site on a triangular plot of land near to the city’s National Park.

Designed as a high-tech innovation hub, Ratti‘s development is intended to solve some of the issues caused by the fragmentation of activities in Brasília, which was arranged by urban planner Costa and architect Niemeyer in 1955.

“The first time I visited Brasília, a friend and long-time city resident told me a long-standing joke: ‘You know what the problem of Brasília is? The district of cafes is far away from the district of sugar’,” Ratti explained.

“In short, a key issue lies with the lack of mixed-use and with the strictly functional subdivision of the city according to modernist principles – which we are aiming to overcome with our plan.”

BIOTIC will include the four urban scales that Costa defined in the plan of Plano Piloto, or Pilot Project, as residential, monumental, gregarious and bucolic.

Unlike the original design, it will integrate them with each other rather than keeping them separate.

“Brasília is a fascinating metropolis: a monumental axis and two wings that captivate you when you look at it from the plane,” Ratti added.

“However as French intellectual Simone de Beauvoir once said, ‘Brasília is an expanse of elegant monotony […] The street, that meeting ground of […] passers-by, of stores and houses, of vehicles and pedestrians […] does not exist in Brasília and never will,” he continued.

“Our project aims to counter this proposition and bring a new vibrancy to Brasília.”

BIOTIC’s design also subverts Brasília’s Superquadra, or Superblock, which refers to the way the city’s residential areas are arranged in blocks composed of apartment buildings within green spaces.

This project, however, will divide similar blocks into quadrants to create open plazas and internal streets that are accessible only to self-driving or shared vehicles.

Ratti’s studio, Carlo Ratti Associati (CRA), said it will also use digital technologies to make sure occupants are able to have access to as much nature as possible. As part of this, the plan proposes making restaurants and cafes spots for smart working, with curtain-like walls that can open up to outdoor work areas called the Outdoor Office.

“The office buildings, hovering above the ground level, are designed for sun and wind to come in,” CRA project manager James Schrader explained.

“Thanks to a system of openable wooden facades that can slide along the building like a curtain, the interior spaces will open to the exterior, allowing users to enjoy Brasilia’s weather. This project merges the interior and exterior into one space.”

CRA has been working on the proposal for real estate company TerraCap with consultancy firm EY since 2018. BIOTIC, is also expected to feature an ecological park, vegetable gardens, laboratories and retail facilities.

Brasília was founded as the new capital city of Brazil on 21 April 1960, featuring an urban plan by Costa and designed by Niemeyer, the country’s most famous architect.

It is a celebrated example of modernist urbanism and was declared as a UNESCO World Heritage site in 1987.

Earlier this week, it was revealed that Brazil’s Institutional Security Office (GSI) is planning to place antenna on top of series of Niemeyer-designed palaces to protect the area from drones.

Italian architect Ratti is the founder of international design and architecture studio Carlo Ratti Associati and a professor at Massachusetts Institute of Technology (MIT), where he directs the SENSEable City Lab.

His other forward-thinking urban projects include a covered garden in Milan that would use climate-control technology to allow visitors to experience spring, summer, autumn and winter at any time of year. The studio also worked with Alphabet company Sidewalk Labs on a modular paving system that can change the use of a street throughout the day.