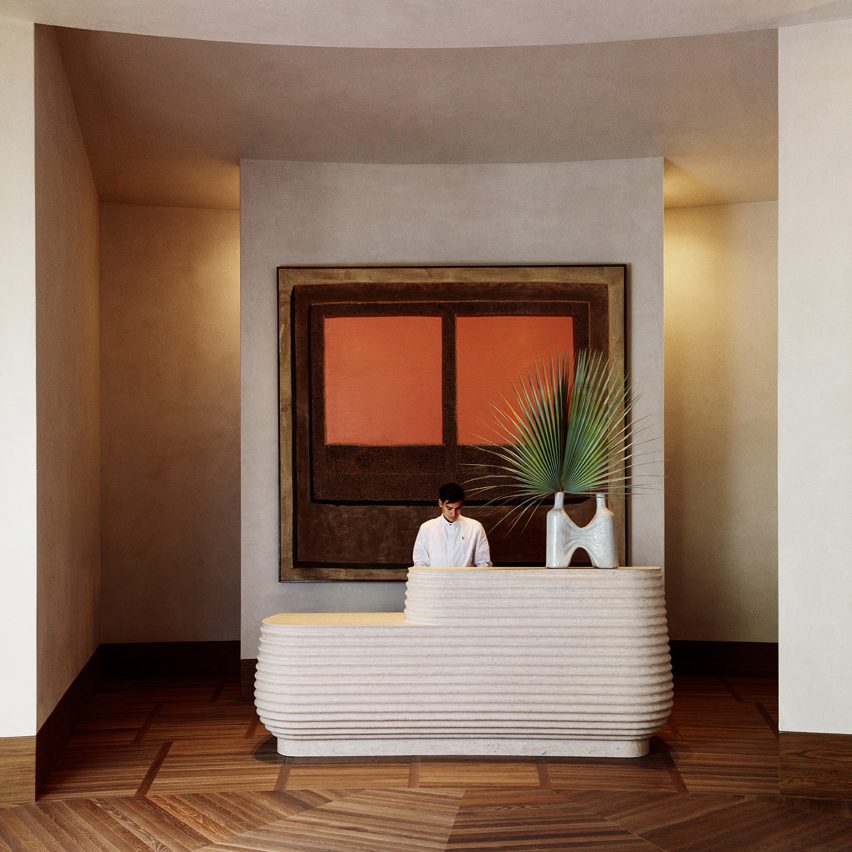 American designer Kelly Wearstler describes how she worked with local artisans and artists on the Santa Monica Proper Hotel in this video produced by Dezeen for the AHEAD Awards.

Wearstler is the designer of Santa Monica Proper Hotel, a 271-room boutique hotel seven blocks away from the beach in Santa Monica, California.

The project was named Hotel of the Year at the 2020 AHEAD Americas hospitality awards, as well as winner of the Guestrooms and Lobby & Public Spaces categories.

The Californian interior designer, who has appeared as a judge on the Bravo reality show Top Design and designed homes for celebrities including Cameron Diaz and Gwen Stefani, described the hotel as “fiercely local” in an exclusive interview filmed by Dezeen.

“We wanted to design a hotel where it felt like you’re in Santa Monica,” she said. “The inspiration came from everything that surrounds the hotel, the palm trees, the organic nature of the architecture, everything that you would find at the beach.”

Natural and heavily textured materials, neutral colours and vintage furniture are used throughout the hotel to create a sensory experience that references Santa Monica’s beachside identity.

“There is a connection of materiality that speaks to the location” said Wearstler. “Organic materials, neutral colour stories, everything has a texture.”

“There’s a patina, there’s a hand, there’s something that feels very warm.”

Santa Monica Proper Hotel is filled with artworks and furniture pieces created specifically for the property by local artists and artisans.

“Everything’s connected to somebody that is local in the city,” Wearstler said. “We’re so lucky to be in Los Angeles, the talent pool here is extraordinary.”

The site consists of the 1920s Santa Monica Professional Building, to which an extension by local firm Howard Laks Architects was added.

“There’s an historic building that was built in 1928, in the Spanish Colonial Revival style, and then there’s a new contemporary building,” explained Wearstler. “We had to connect these two buildings with one voice.”

“The atmosphere is something that’s just very relaxed,” the designer asserted. “When you come to California, it’s just super relaxed and it’s friendly, and there is a sense of style – it’s just cool. We can connect you to that coming to Santa Monica Proper.”

The hotel is the latest in the Proper brand, which was founded by Wearstler’s developer husband Brad Korzen alongside hotelier Brian De Lowe, following the San Francisco Proper which Wearstler also designed.

Previous hospitality collaborations from Wearstler and Korzen include the Tides hotel in South Beach, Florida, the Avalon and Maison 140 hotels in Beverly Hills, and hotels for the Viceroy brand in Miami, Palm Springs and Santa Monica.

This year’s AHEAD Americas awards were shown in a video ceremony as part of Dezeen’s Virtual Design Festival after the event was called off due to the coronavirus pandemic. Previous winners of the Hotel of the Year award include the opulent Siren Hotel in Detroit and the Calistoga Motor Lodge and Spa, a renovated motel in California.

This video was produced by Dezeen for AHEAD. Photography is by The Ingalls and Matthieu Salvaing.