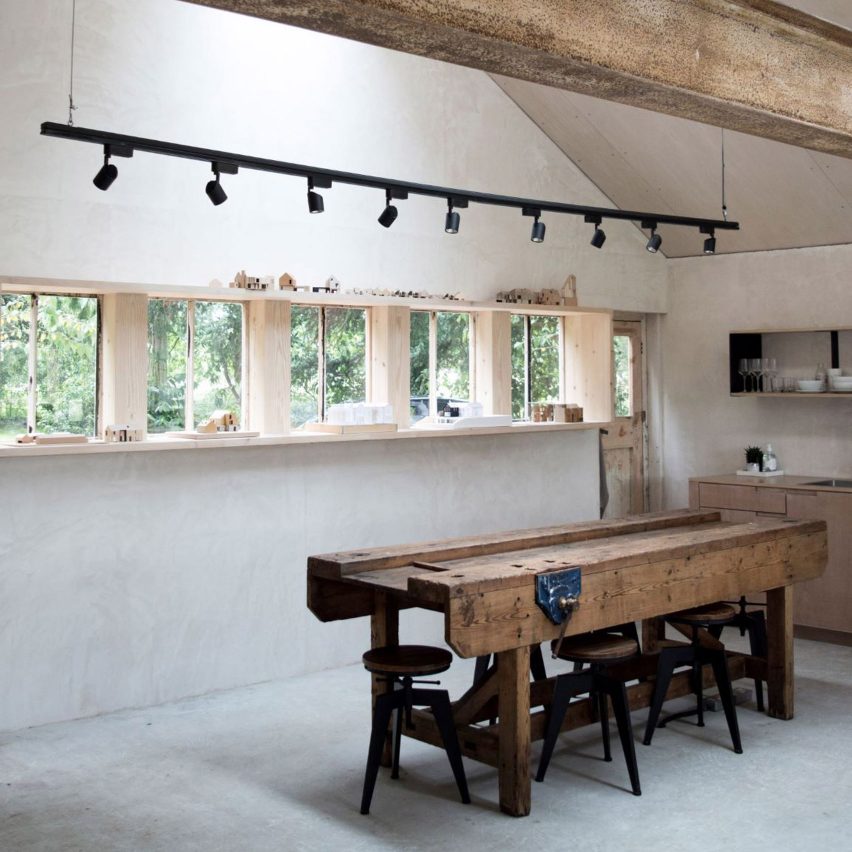 Annabelle Tugby Architects has created its own design studio by renovating and extending a semi-derelict joinery workshop in a cow field in Cheshire, UK.

Located in the village of Styal, the self-designed studio was built as Annabelle Tugby Architects outgrew its previous office and required a larger space into which it could expand.

Rather than building from scratch, the studio adopted a more eco-friendly approach of refurbishing an old rustic building with “character and texture” and adding a small timber frame extension. 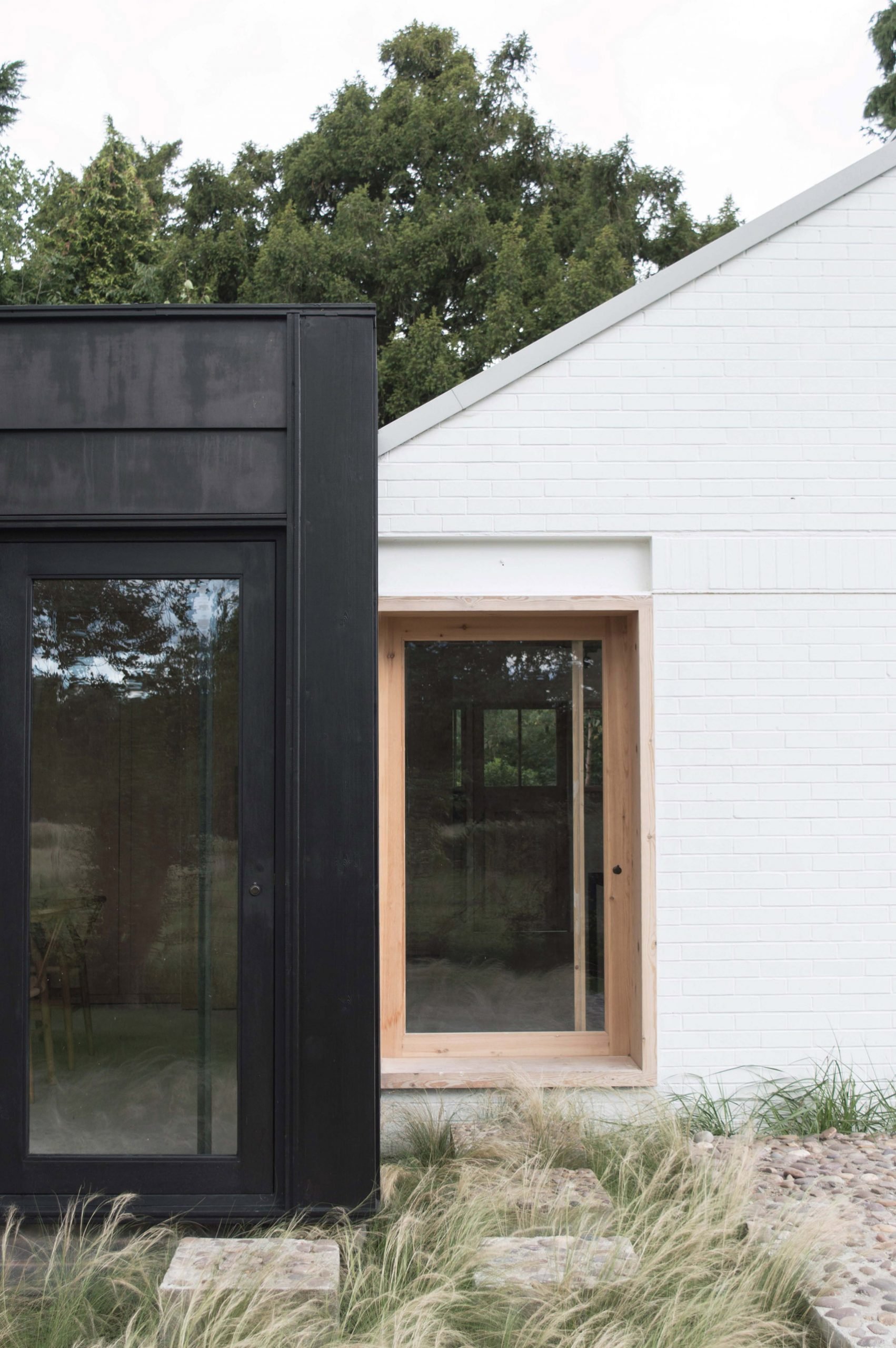 “The previous office was just down the road but as the size of the practice increased we sought a beautiful old building nearby to renovate and grow into,” explained Tom Overbury of Annabelle Tugby Architects.

“We were keen to work with a building which had character and texture. We are also very conscious of the need to adapt and reuse buildings wherever possible rather than simply demolishing them,” he told Dezeen.

“The setting of the new building, surrounded by a field of beautiful longhorn cows and calves makes it a beautiful place to work year-round.” 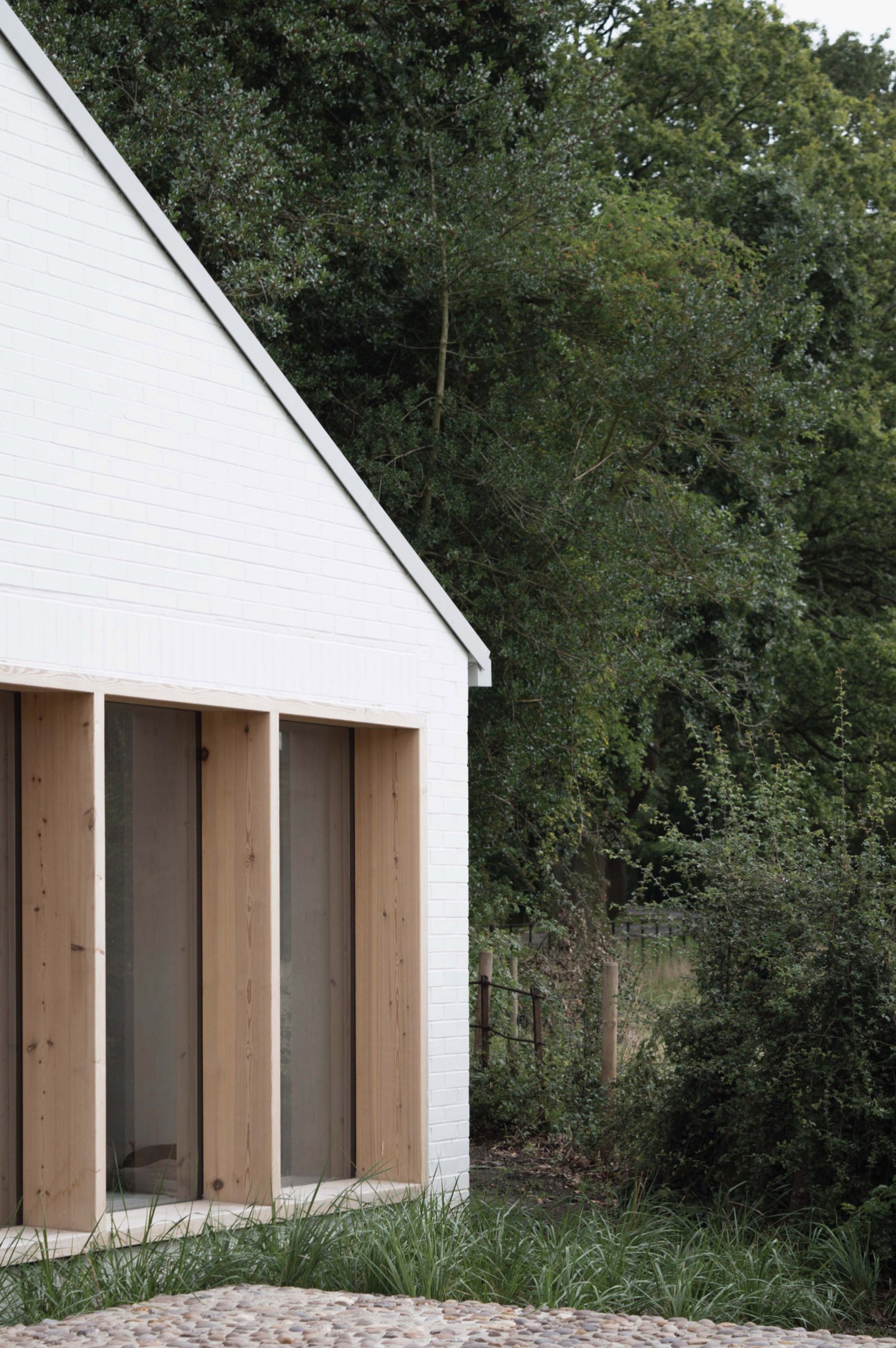 Now complete, the original gabled building serves as the studio’s main drawing space, chosen for its spacious interior with a high ceiling.

The office’s ancillary spaces, such as the meeting room and toilet, are therefore contained within the new timber extension that is single-storey and flat-roofed.

“The decision was made quite early on to leave the main drawing space as a whole volume and have a single storey extension adjacent to it,” explained Overbury. “It felt worthwhile to preserve this volume.” 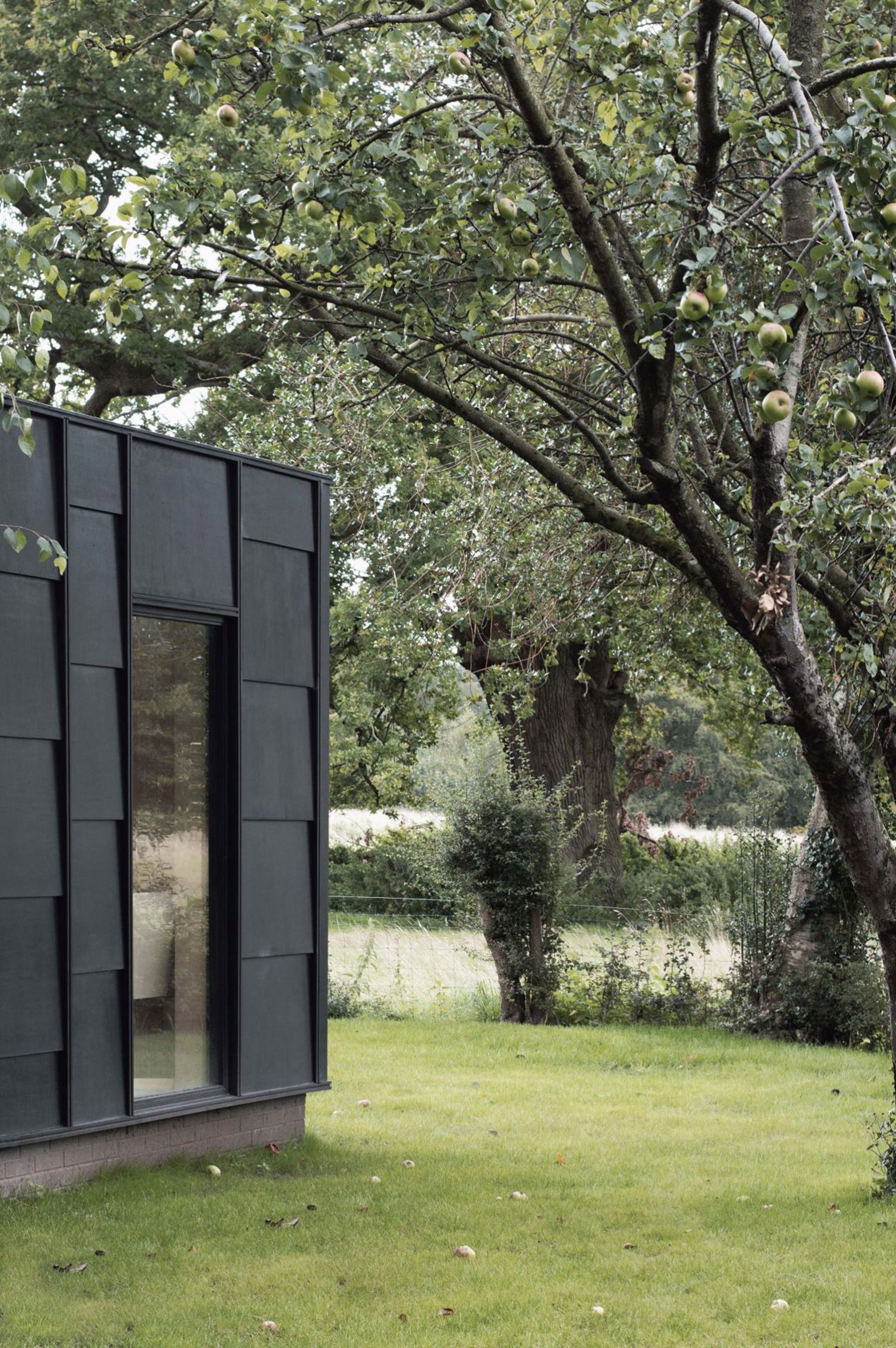 Externally, the workshop’s original white render finish has been updated and overclad with white-washed bricks, while the extension is finished in contrasting large, black timber panels.

These materials were chosen to pay homage to local vernacular, but to also visually exaggerate the differences in scale and form of the two buildings. 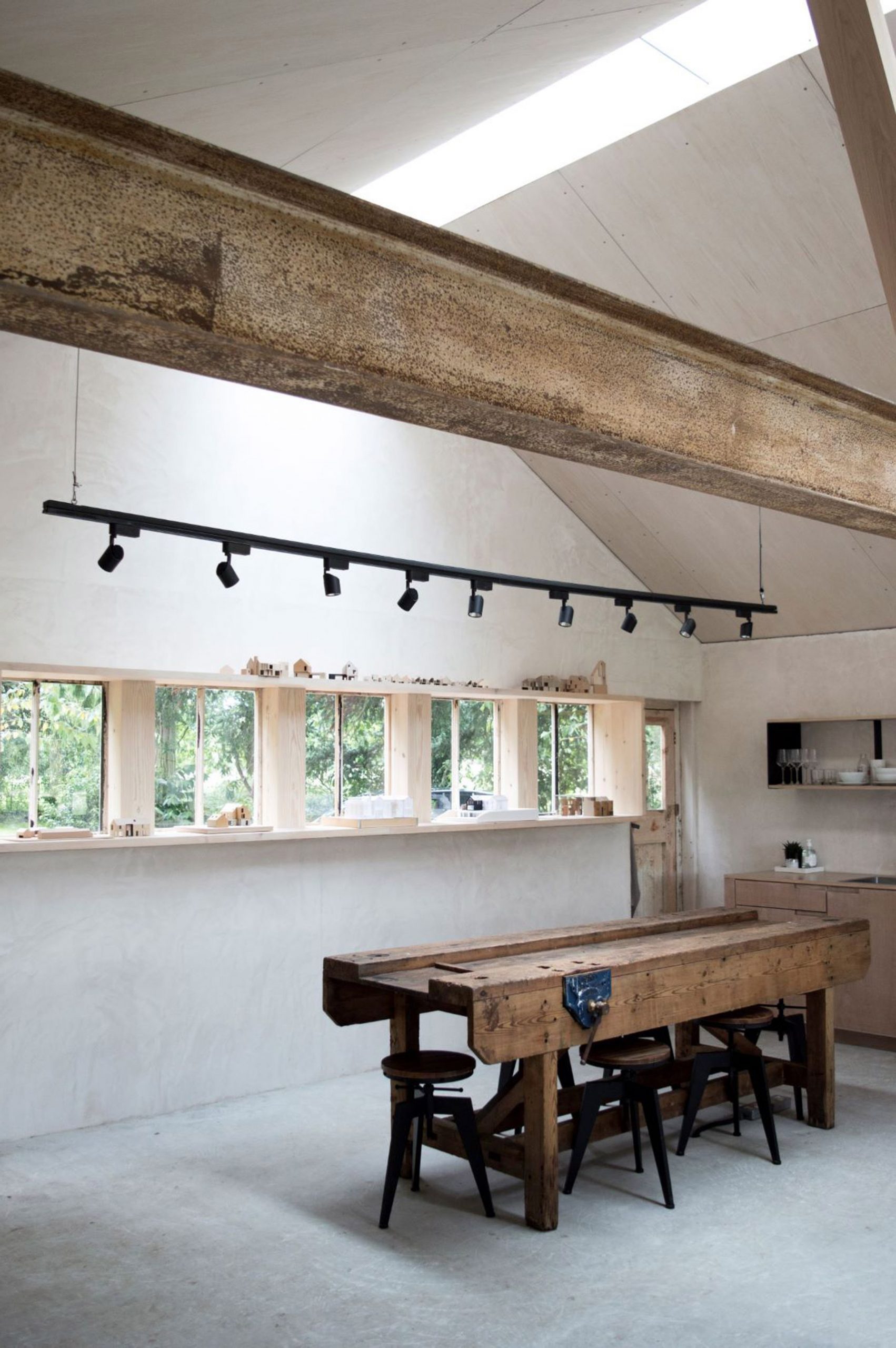 “As a village Styal has a selection of beautiful historic black and white properties, generally black timber and white painted brick or render,” explained Overbury.

“From the outset we sought to respect this context with whitewashed brick to the main workshop space and larger format black timber cladding chosen to complement this on the single-storey extension.” 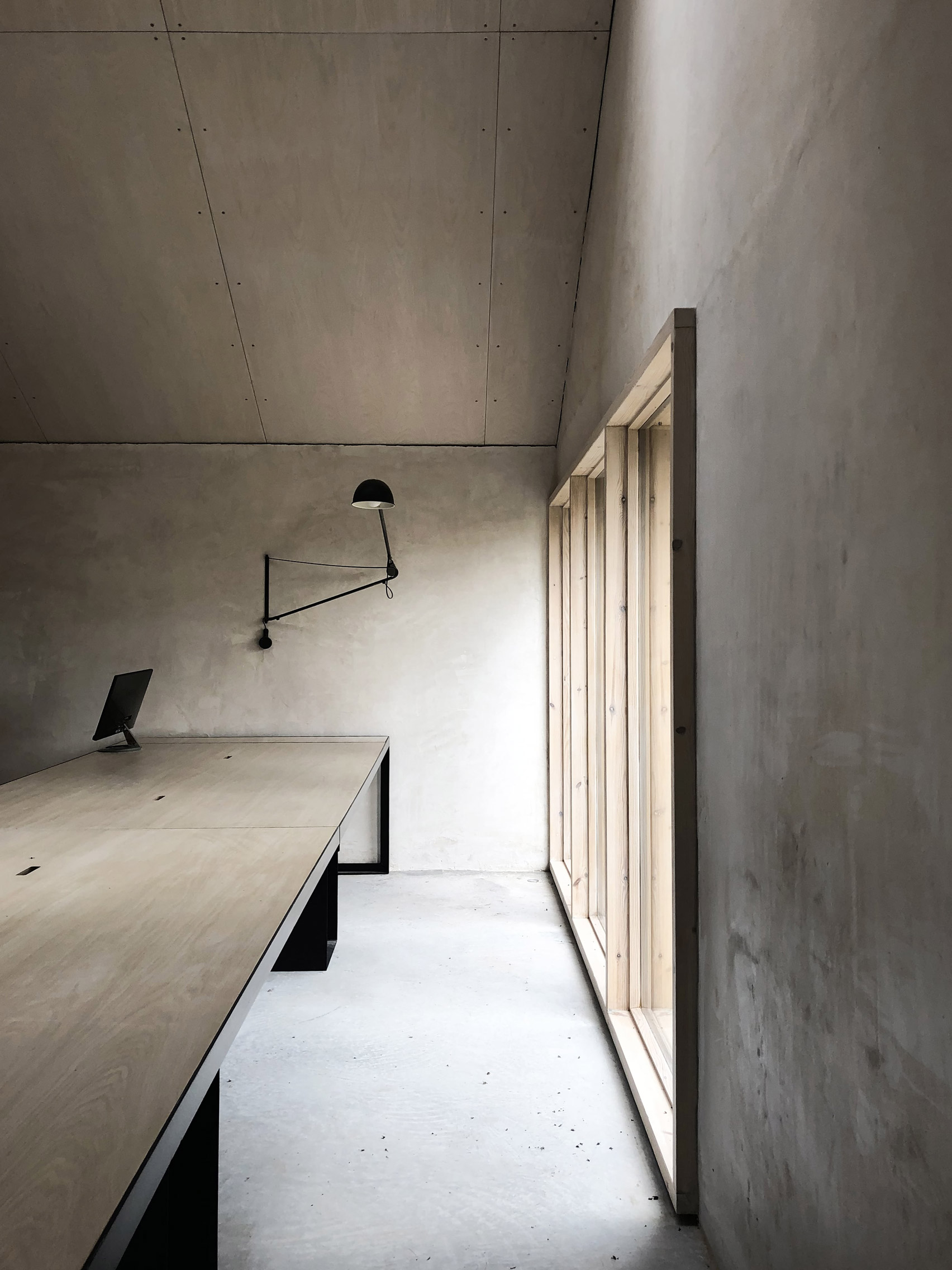 On the front elevation of the main studio space, the existing timber doors have been restored and refitted. Internally, this wall is now used as the studio’s model display area.

To maximise natural light inside, a full-length skylight has been added to the ridge of the roof while glazing to the rear opens out and frames views of the surrounding field.

The interior finishes are designed for warmth and tactility, dominated by natural lime plaster and lime-ash wood boards.

Furniture and cabinetry throughout was also made from wood, designed by the studio and crafted by a local steel fabricator and joiner. This includes a joiner’s bench in the meeting room that nods to the building’s former use. 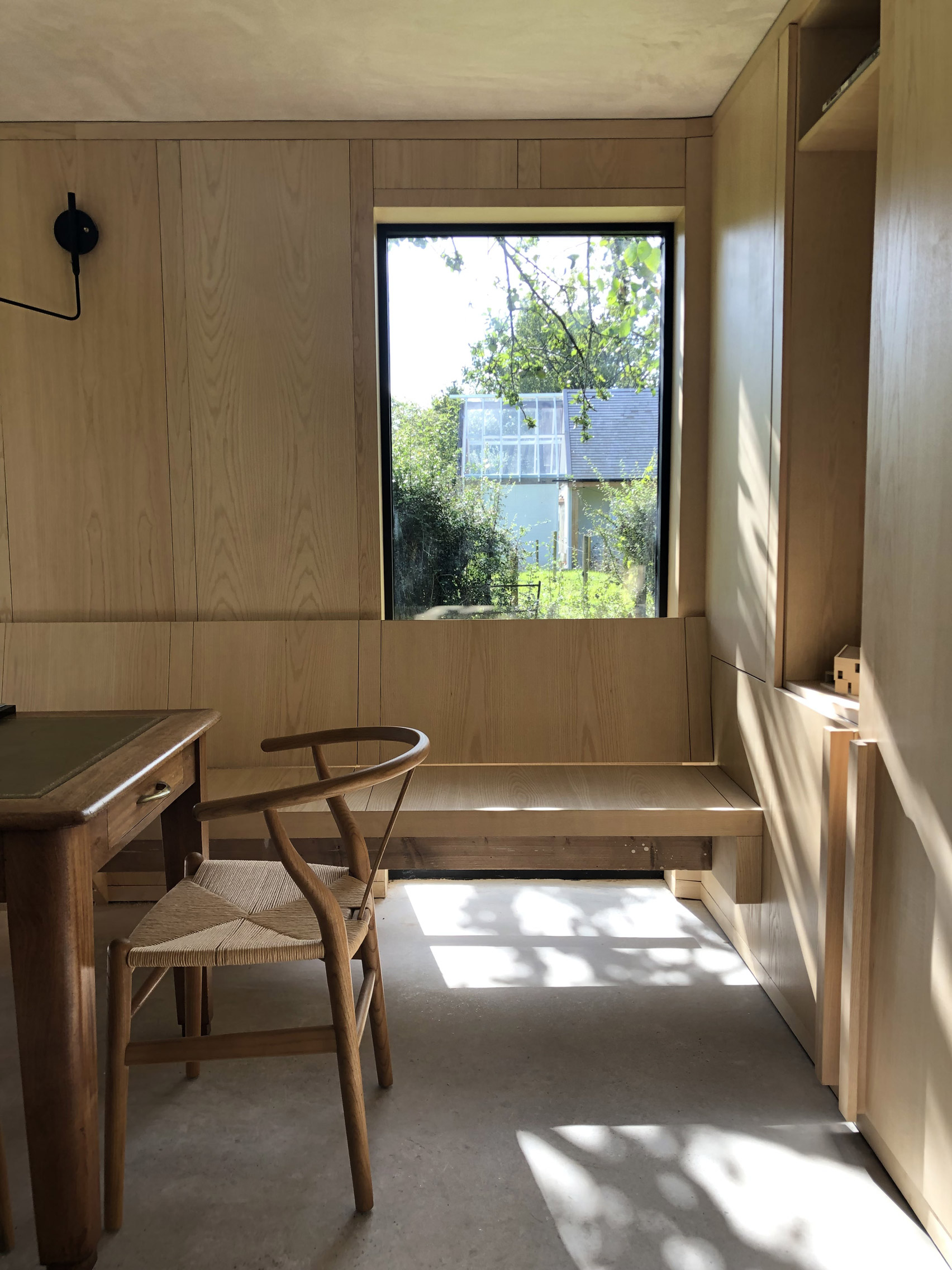 “The interior finishes were chosen with a view to creating a warm and sensitive place to spend a day working,” explained Overbury. 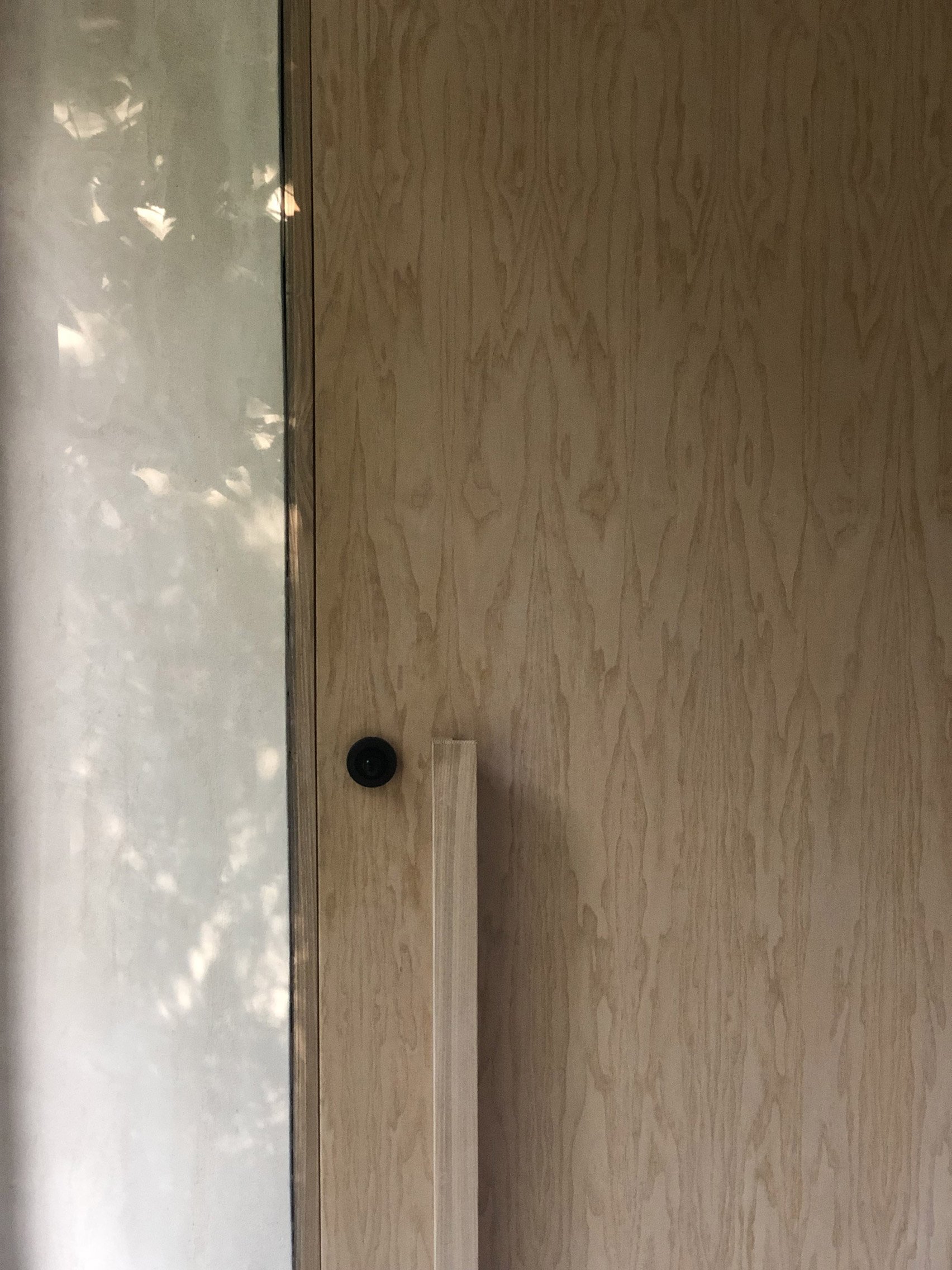 Annabelle Tugby Architects’ studio is complete with an air source heat pump, which is the office’s sole heat source and was chosen as a sustainable alternative to a traditional combination boiler.

Other rural, self-designed studios on Dezeen include David Guambo’s stilted workspace in Ecuador that has a straw roof and John-Paul Philippe’s refurbished barn in Connecticut that doubles as his home.

Photography is by Annabelle Tugby Architects.