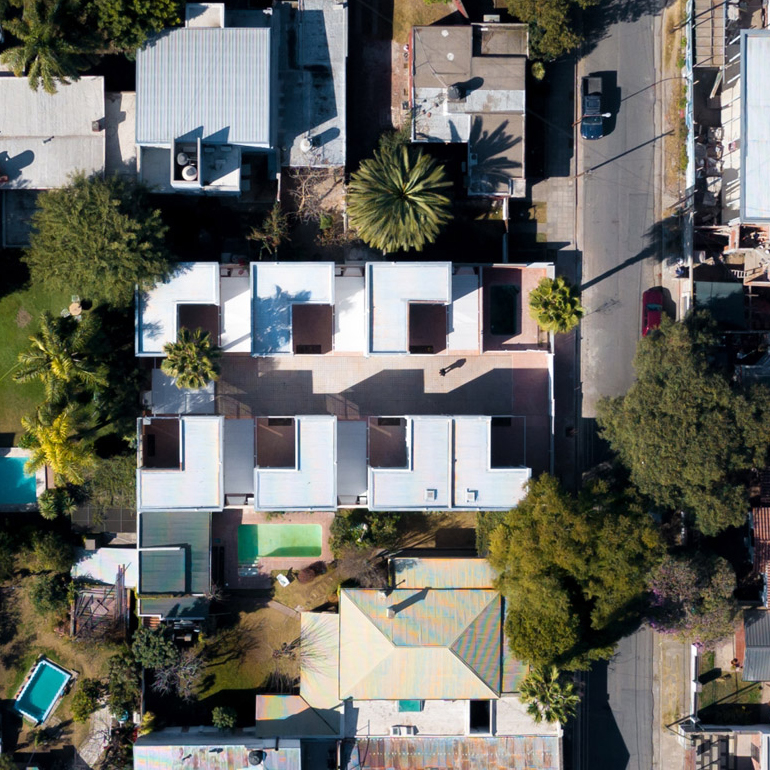 Córdoba-based Studio LZ ​​has designed a group of seven L-shaped, two-bedroom homes in the city of Villa Allende, Argentina.

Named Azaleas, the small housing development was built on a 600-square-metre plot in the north of Villa Allende in central Argentina. 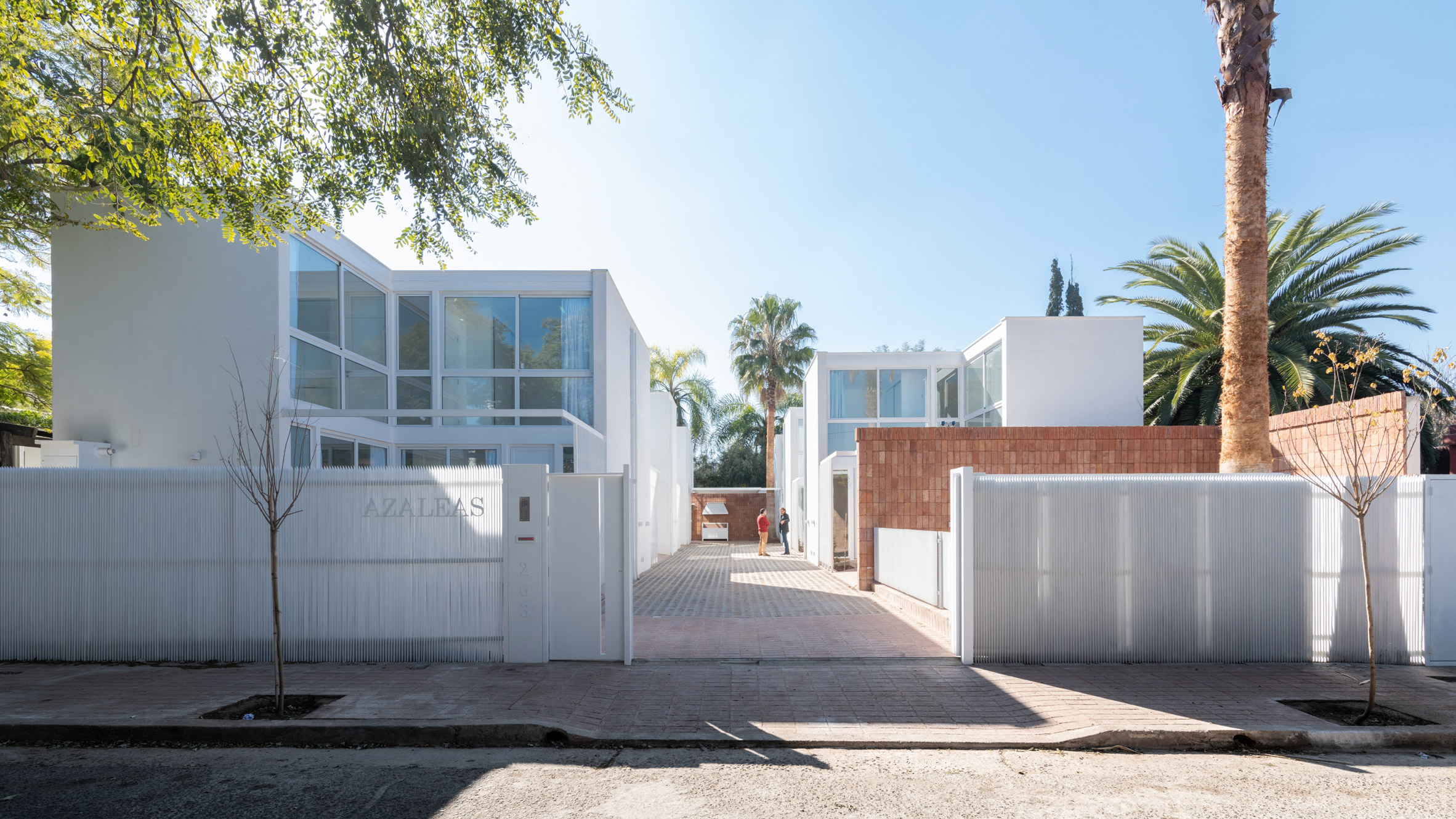 Studio LZ arranged the houses in two rows on either side of a central courtyard with the aim of creating homes that made the best use of the small plot.

“The project is about achieving a good quality of life on a minimal parcel and developing a rational and adjusted architecture that allows the distribution of spatial and economic resources correctly,” Studio LZ founder Pablo Lorenzo told Dezeen. 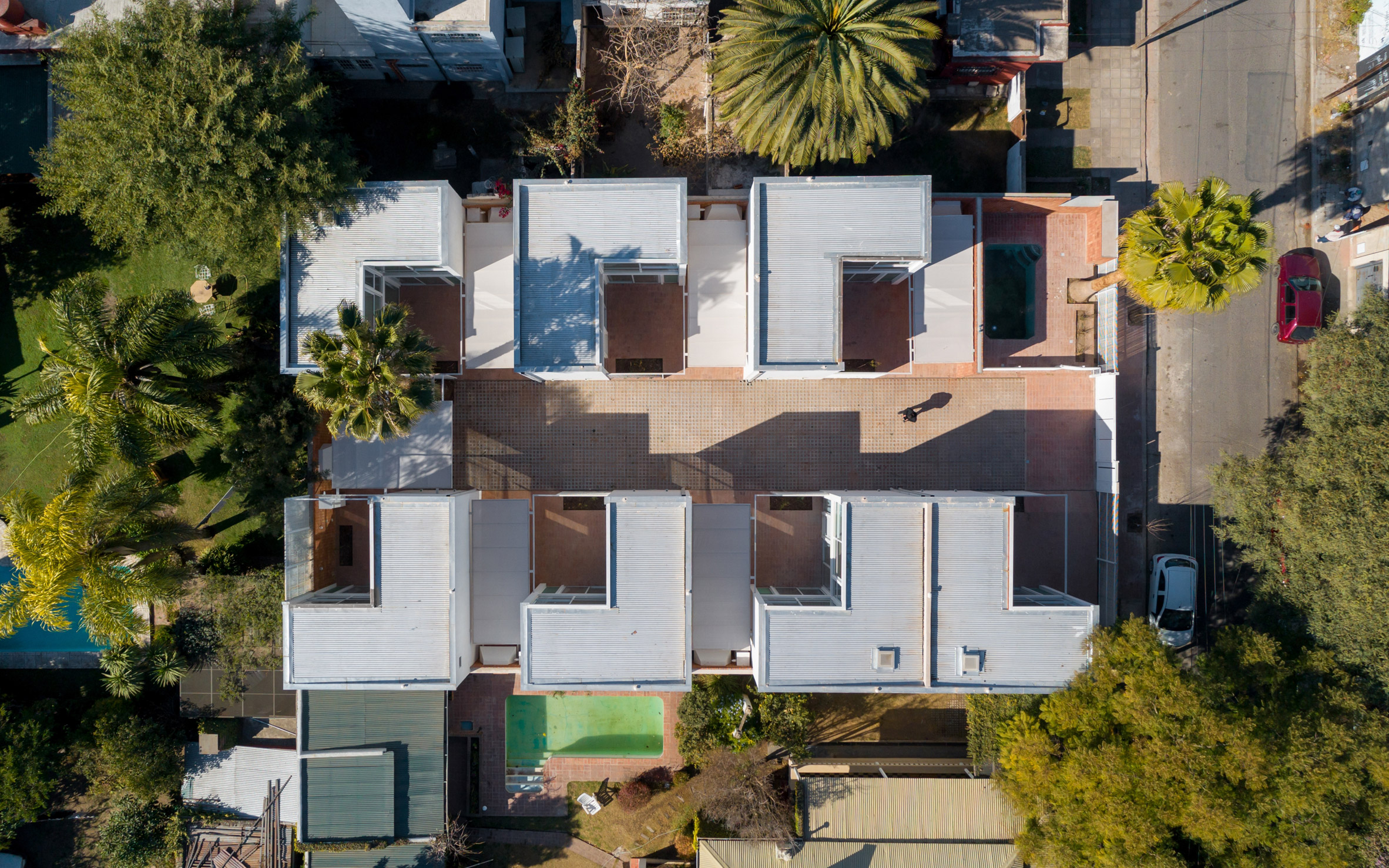 Each of the two-storey homes has the same L-shaped floor plan with large windows on both floors overlooking a small courtyard space.

Five of the seven houses also have an additional outdoor space, a covered area that contains a barbecue, while a communal pool has been built at the front of the development. 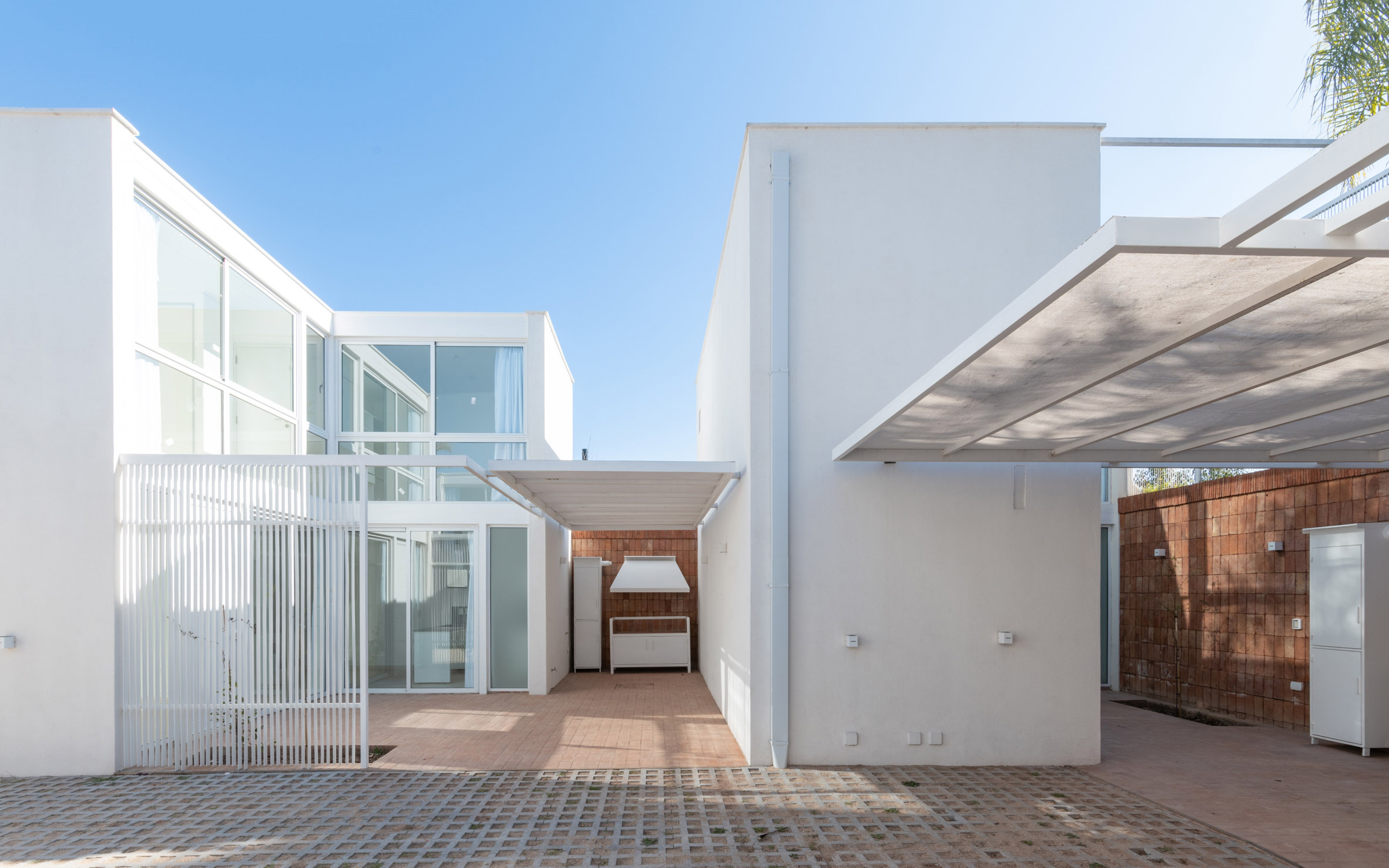 Each of the homes has the same arrangement internally, but they have been orientated in a variety of ways to create a series of private spaces.

“The resulting layout is the answer to a design exercise where the internal functional need interacts with its immediate external environment,” explained Lorenzo.

“This geometry allows us to alternate, rotate or mirror each volume to achieve privacy, gain light, generate interesting spatial dynamics, and also collaborates with constructive rationality in terms of time and available resources.” 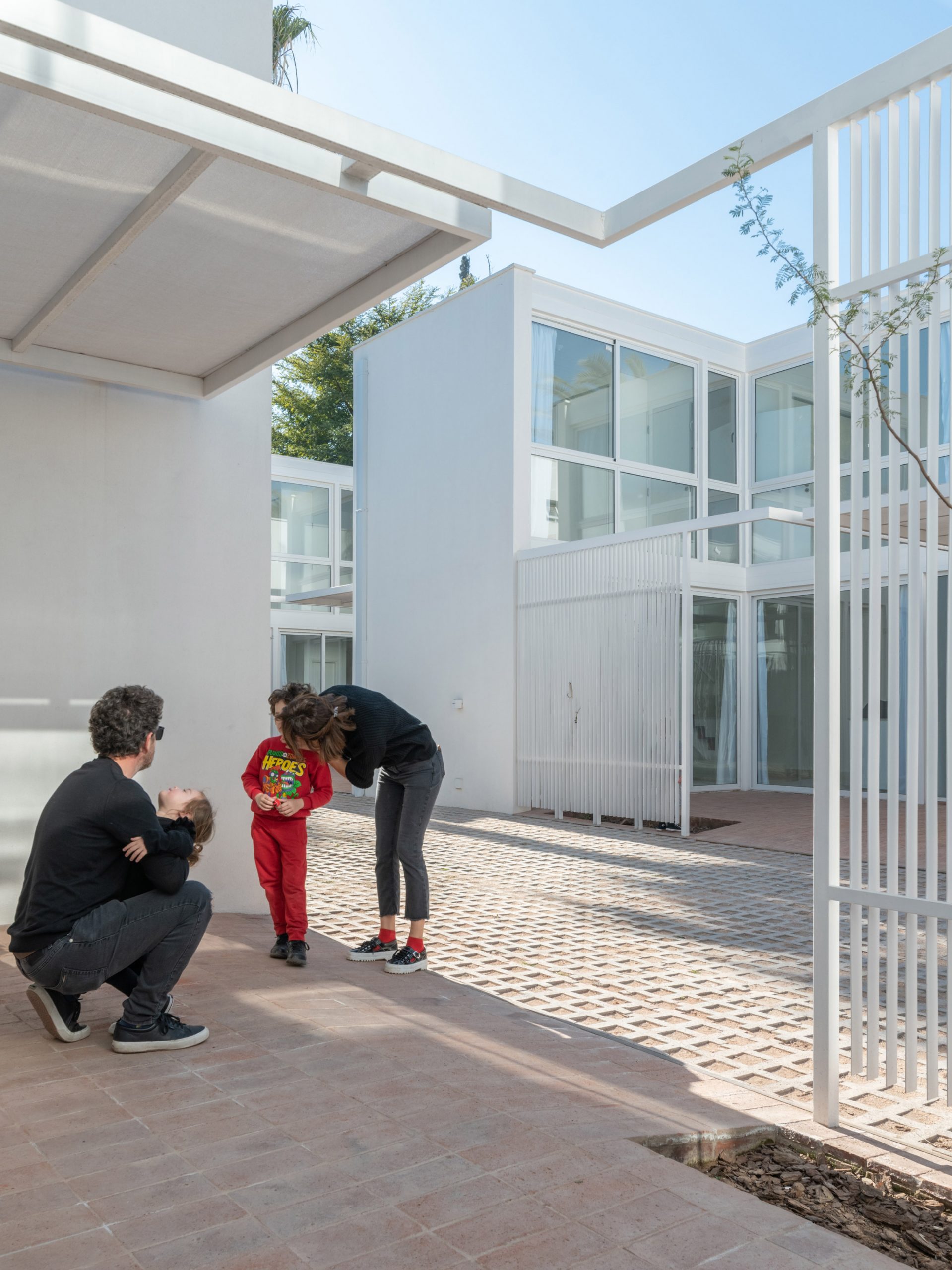 The 63-square-metre homes all contain a sitting area, kitchen and toilet on the ground floor, with two bedrooms and a bathroom on the floor above.

“The key was always to minimize circulation spaces, integrate them and take advantage of that surface to improve the quality of the other areas of the house,” said Lorenzo. 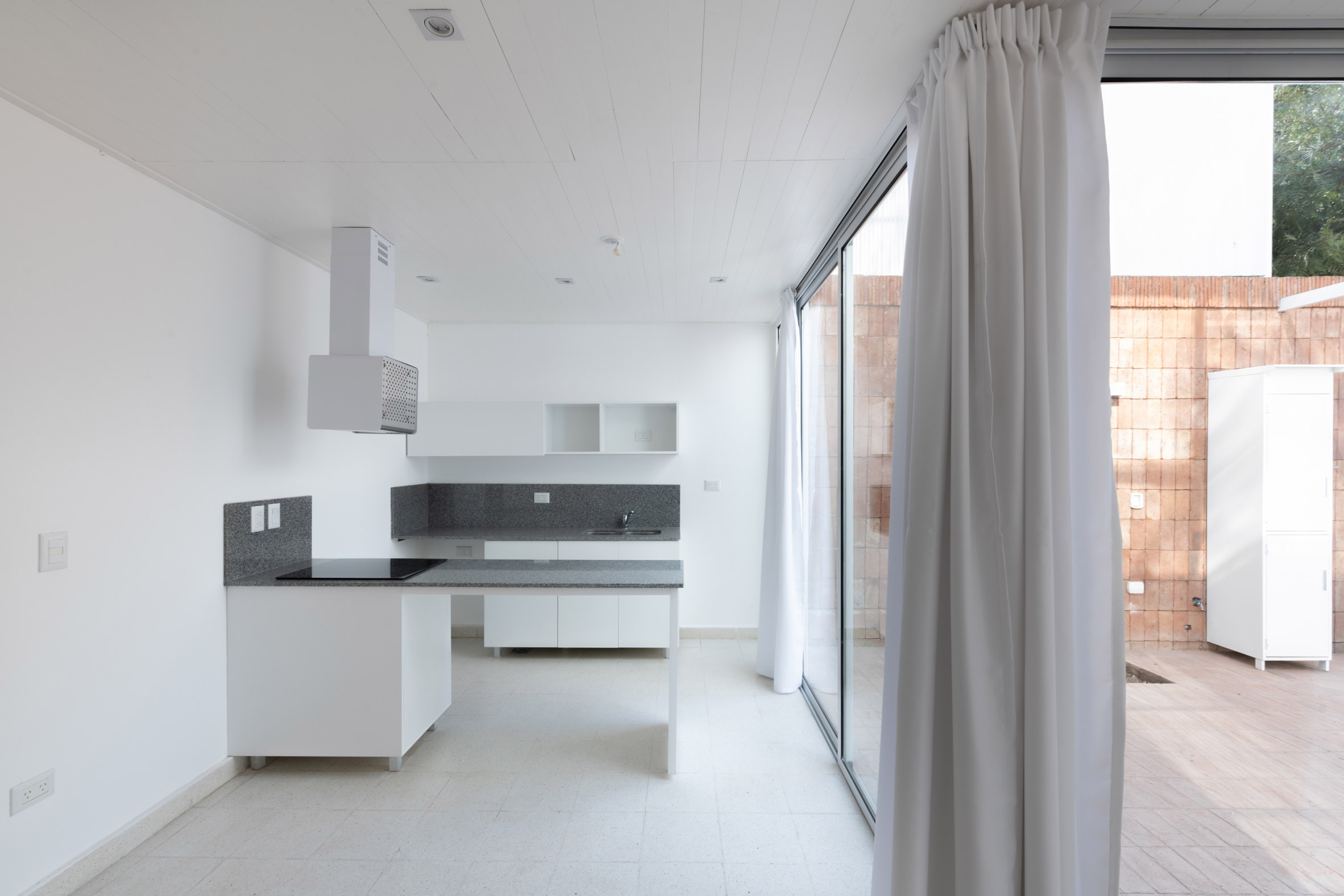 Lorenzo believes that the small, but dense, housing development offers an alternative to apartment blocks being built in the city as the design is closer to that of a “typical single-family house”.

“It is difficult to contrast our project with other housing in the city because they are not comparable in terms of density,” he said.

“We can say that it is the first of its kind in the central area, the difference with some other nearby case lies fundamentally in the resolution of a piece of integral architecture and the recovery of the spirit of the typical house from the neighbourhood instead of an apartment block.” 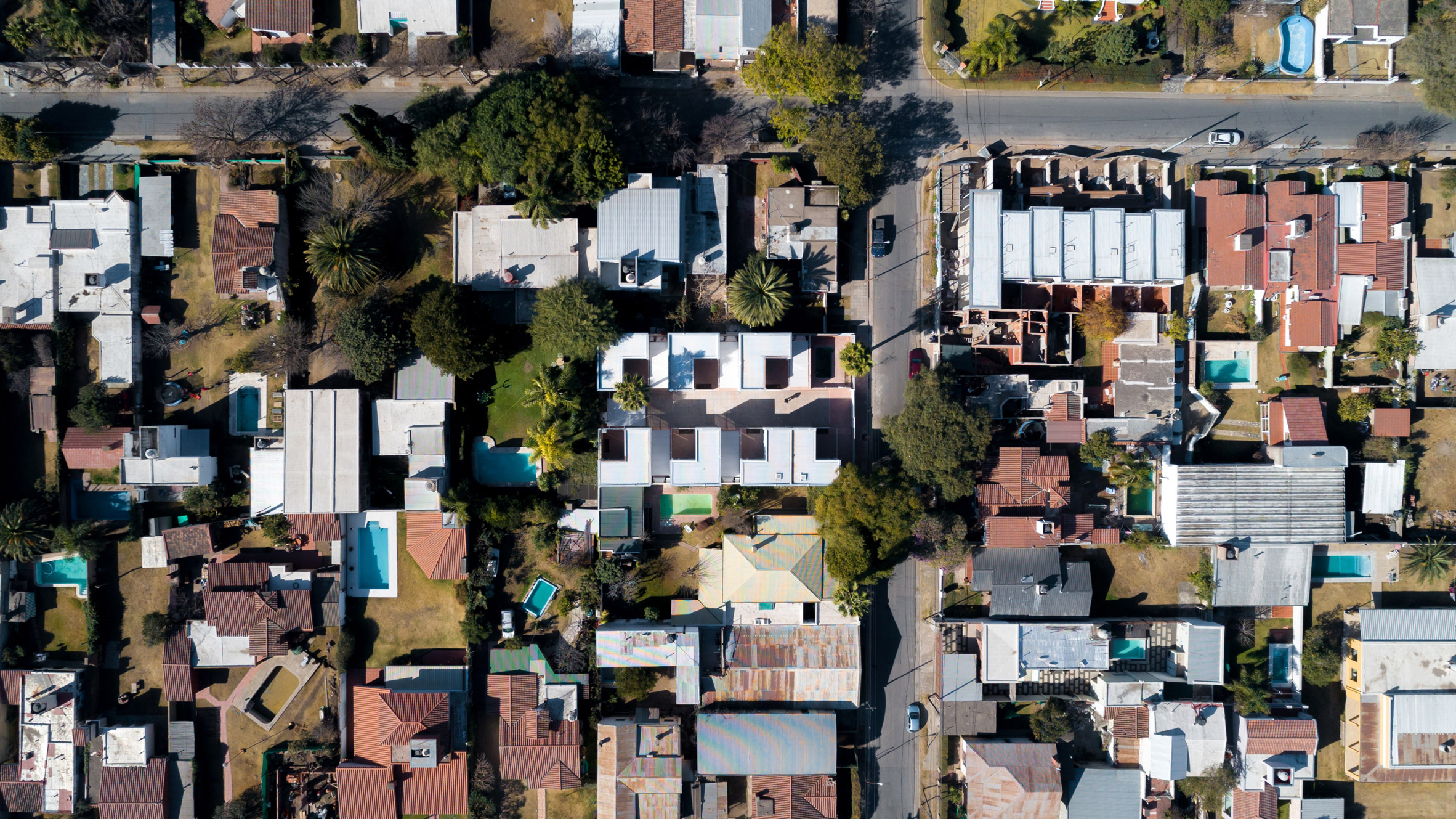 Other recently completed residential projects in Argentina include a brick apartment complex in Mendoza that combines rounded walls, courtyards and portholes and a sheep farm designed as a “compact village” in Patagonia.

Photography is by Gonzalo Viramonte.