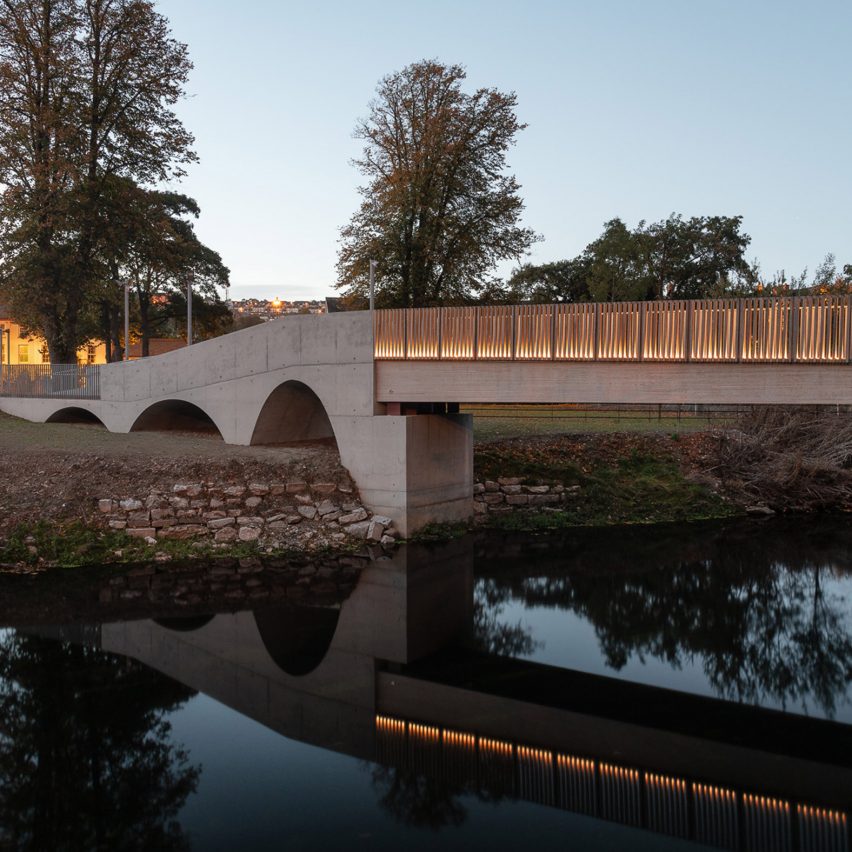 The Irish firm designed the pedestrian bridge as part of a wider masterplan to improve connections from the local university campus to surrounding streets.

Named Cavanagh Bridge, the crossing over the River Lee connects the college’s quadrangle with the Western Road, and gives students direct access to an area of green space across the river from the university. 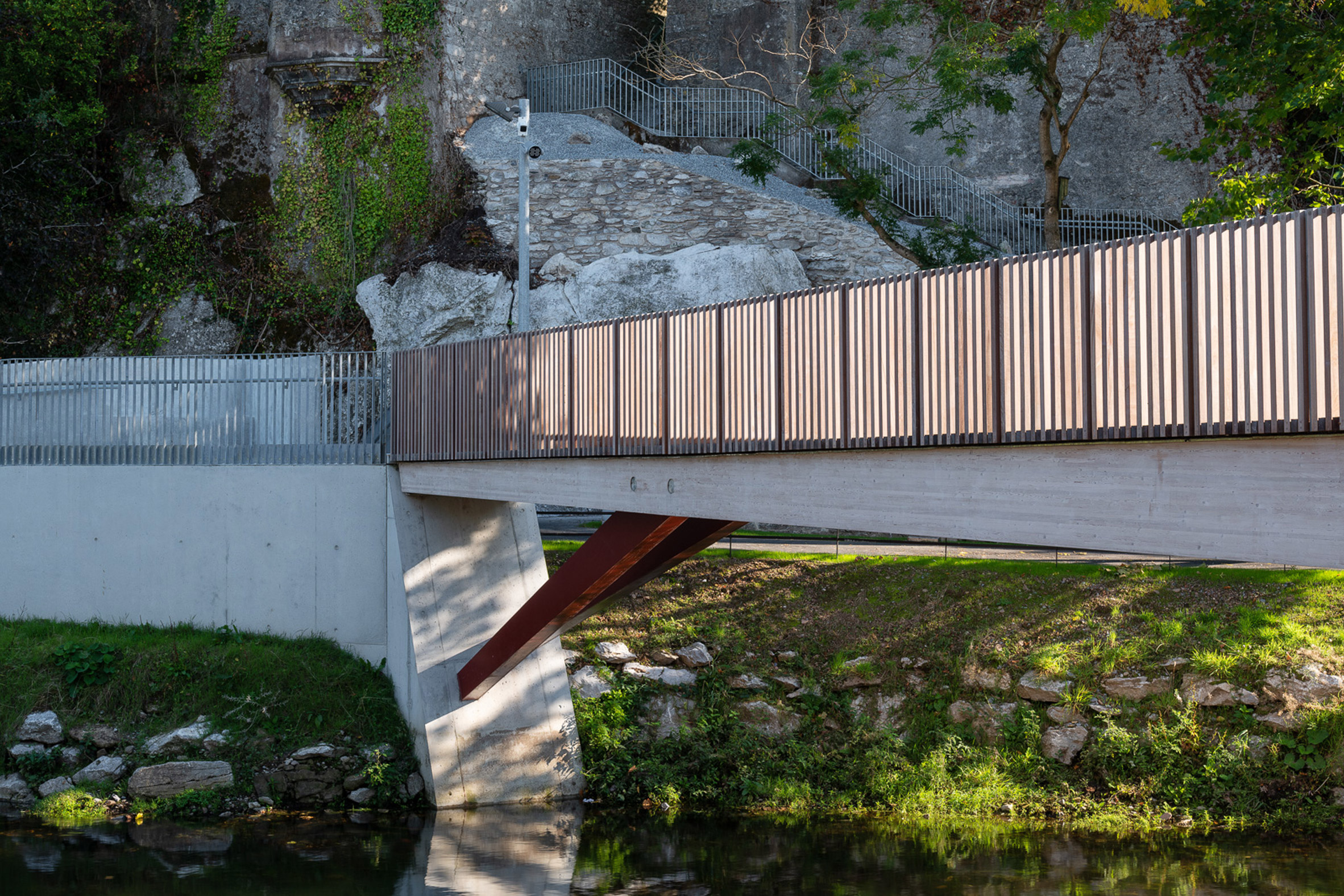 By placing the bridge at an angle to the river, O’Donnell + Tuomey enabled it to join onto the route of an existing path.

It was constructed from two concrete abutments connected by a deck made of long-span beams of laminated timber, which are supported by two steel beams. The bridge’s floor and handrails are made from larch and Jatoba wood. 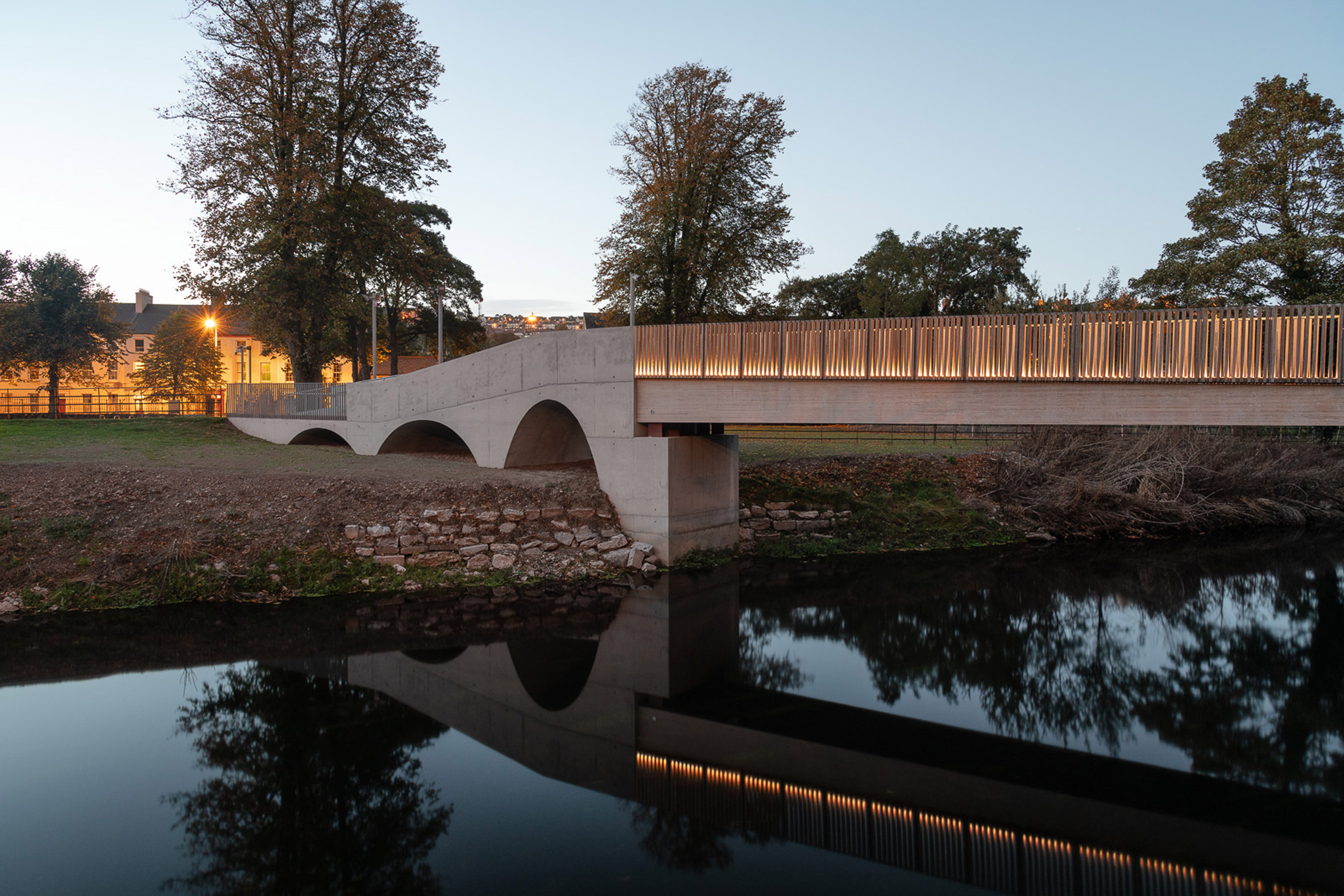 “The form of the bridge is articulated in three parts,” explained O’Donnell + Tuomey co-founder John Tuomey.

“It diagonally straddles the stream in a sinuous continuation of established pathways, rather than disrupt the natural flow with a right-angled river crossing,” he continued.

“The bridge alignment is cranked to pull together various paths into a coherent confluence of pedestrian movement.” 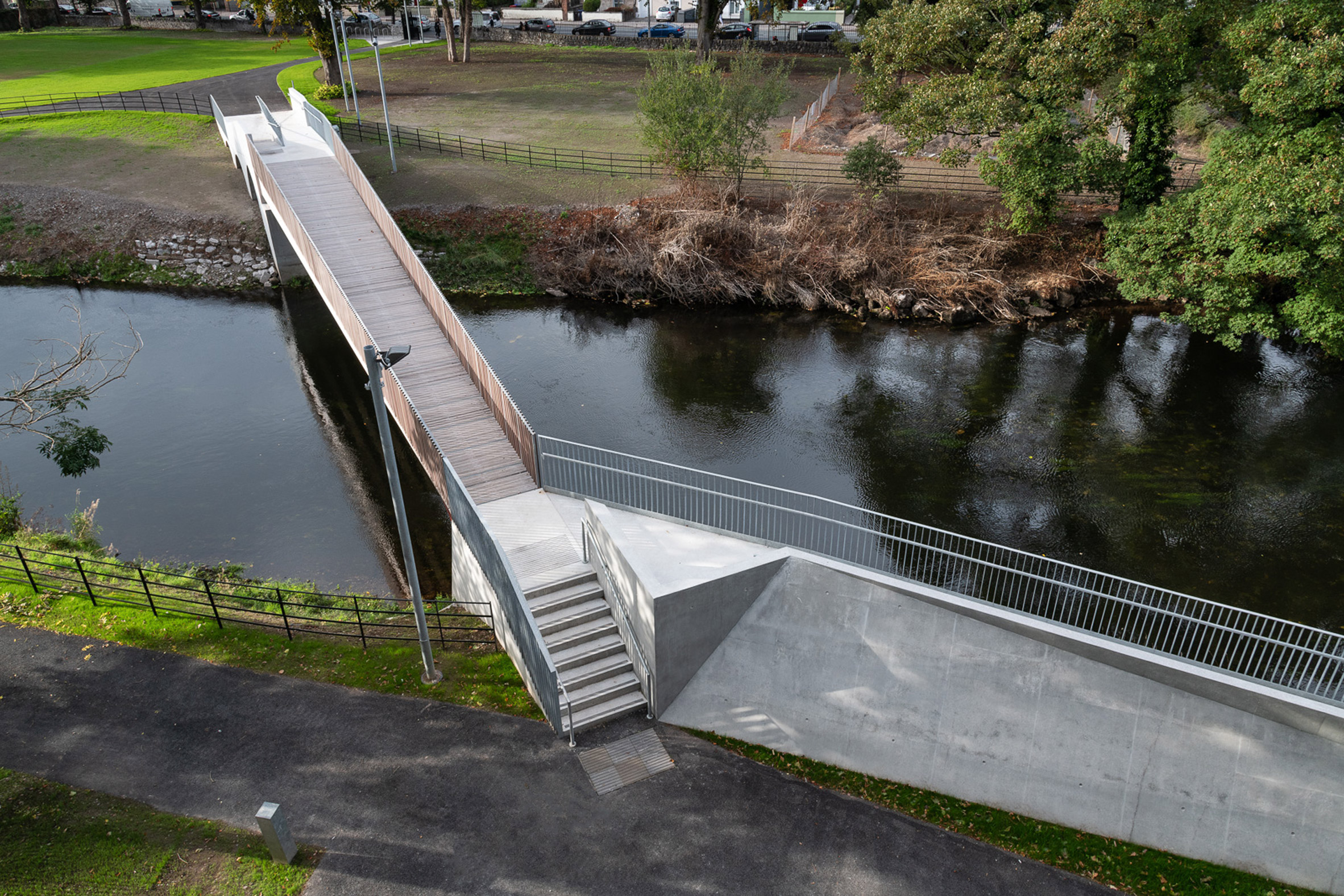 The two concrete abutments each contain a set of steps and a wheelchair-accessible route, as well as incorporating seating along its walls.

On the river’s north bank the studio created archways within the concrete structure to allow floodwater to pass through when the river is in full flow. 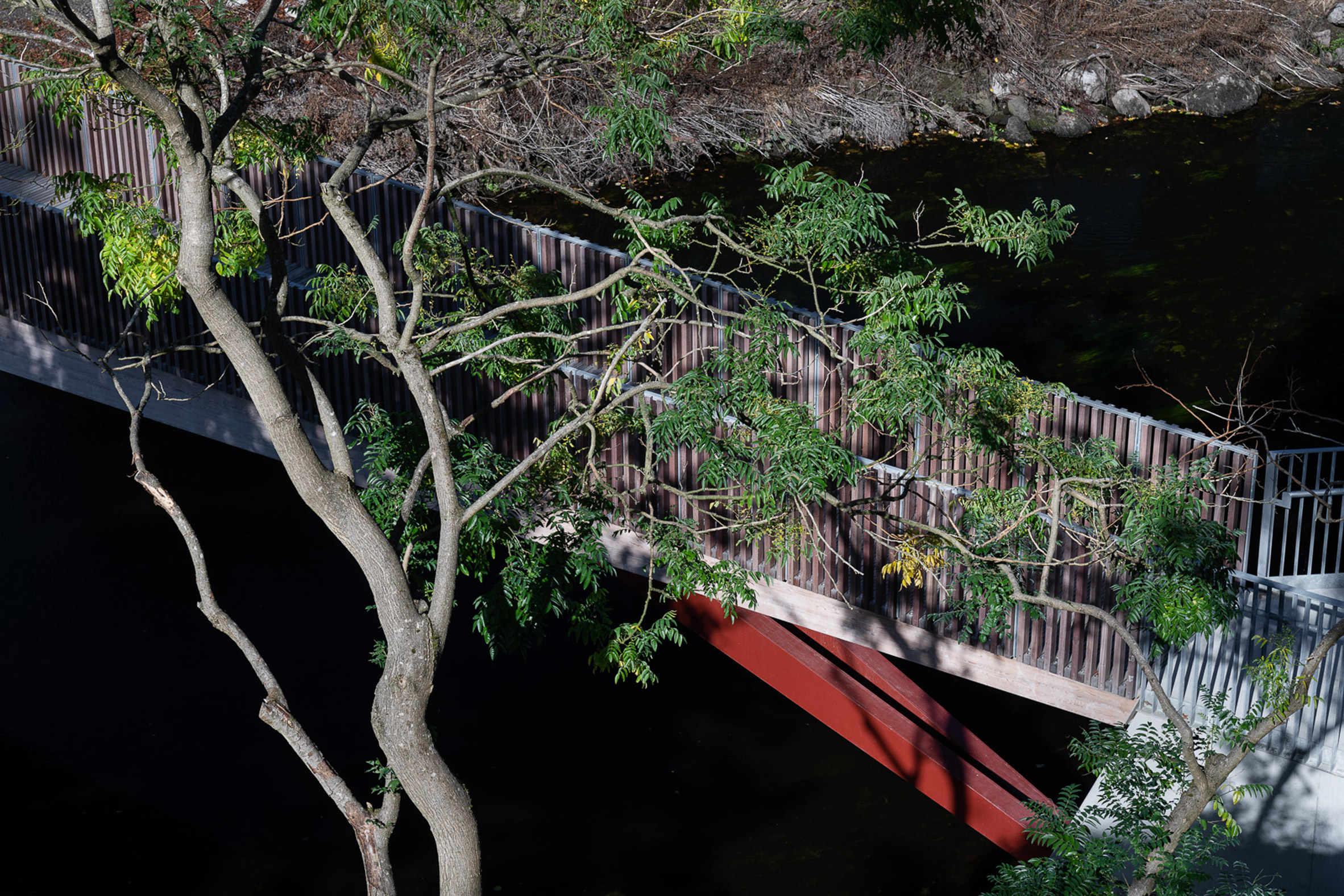 The structure of the bridge was designed so that each part has been built from the material most appropriate for its destined use.

“Long-span beams of laminated timber land on sloping concrete buttresses, with each side adapted to its topographical conditions,” explained Tuomey.

“The 27-metre clear span is at the technical limit of the laminated beams,” he added. “Each element – concrete, timber and steel – is structurally independent but mutually supportive.”

The bridge is one of three projects that O’Donnell + Tuomey has designed near University College Cork’s 19th century quadrangle.

In 2005 the studio completed the Glucksman Gallery, which is located along the riverside walk from the bridge, while its Student Hub project will be open for the next university semester. 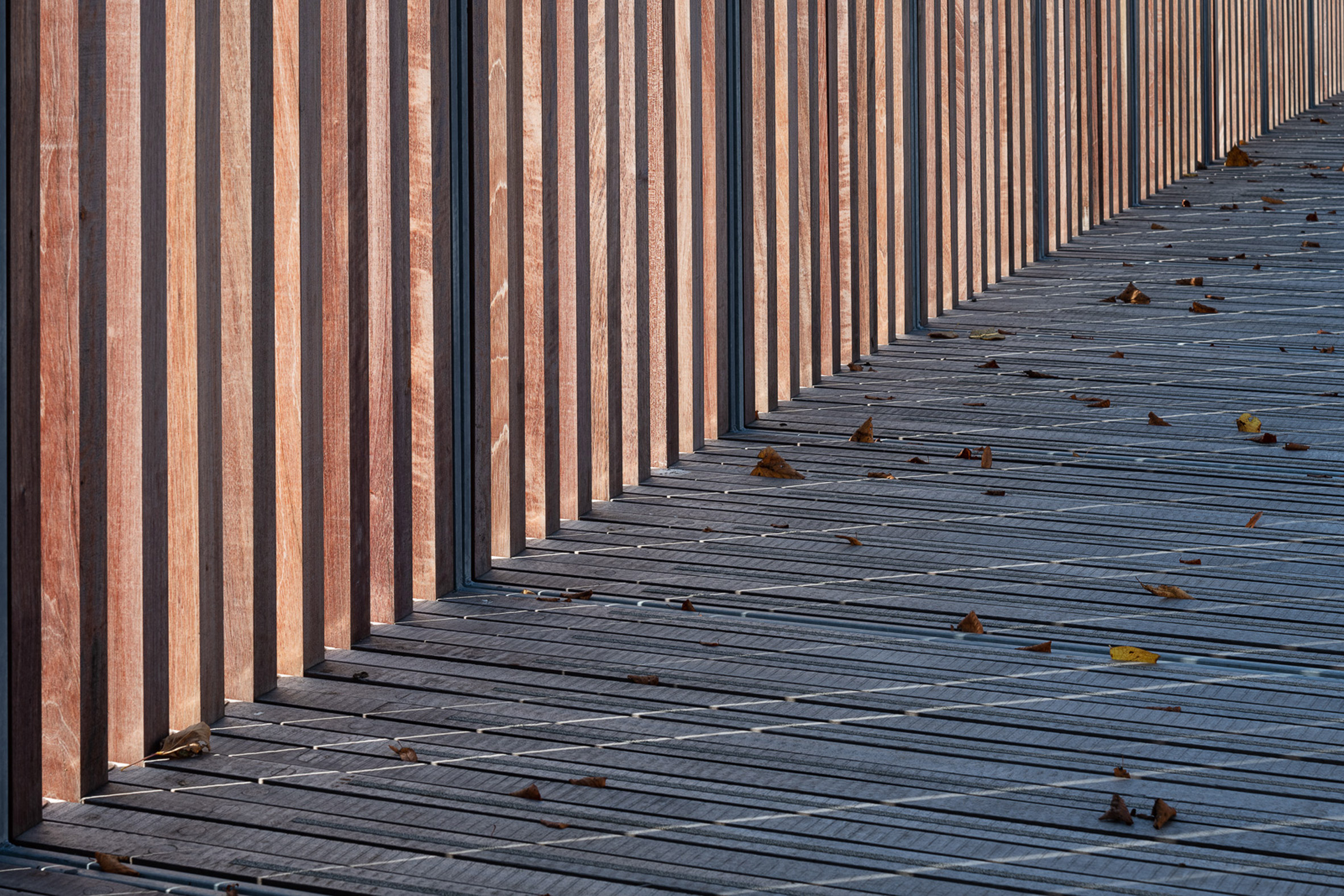 According to Tuomey, each of the projects was designed to reinforce and support the historic quad building and, as a result, they each share a common design philosophy.

“The gallery, bridge and student hub all support the landscape setting of the central quad, reinforcing its pivotal position within the campus core,” said the architect.

“Like the historic quad, these contextually connected interventions are arranged around through-going lines of outdoor circulation.”

“The designs share common strategies; each surrenders a piece of its own territory for the common good of the public realm,” he continued.

“The new buildings act as dynamic elements, vectors of sympathetic change that consolidate the conditions of the given situation.” 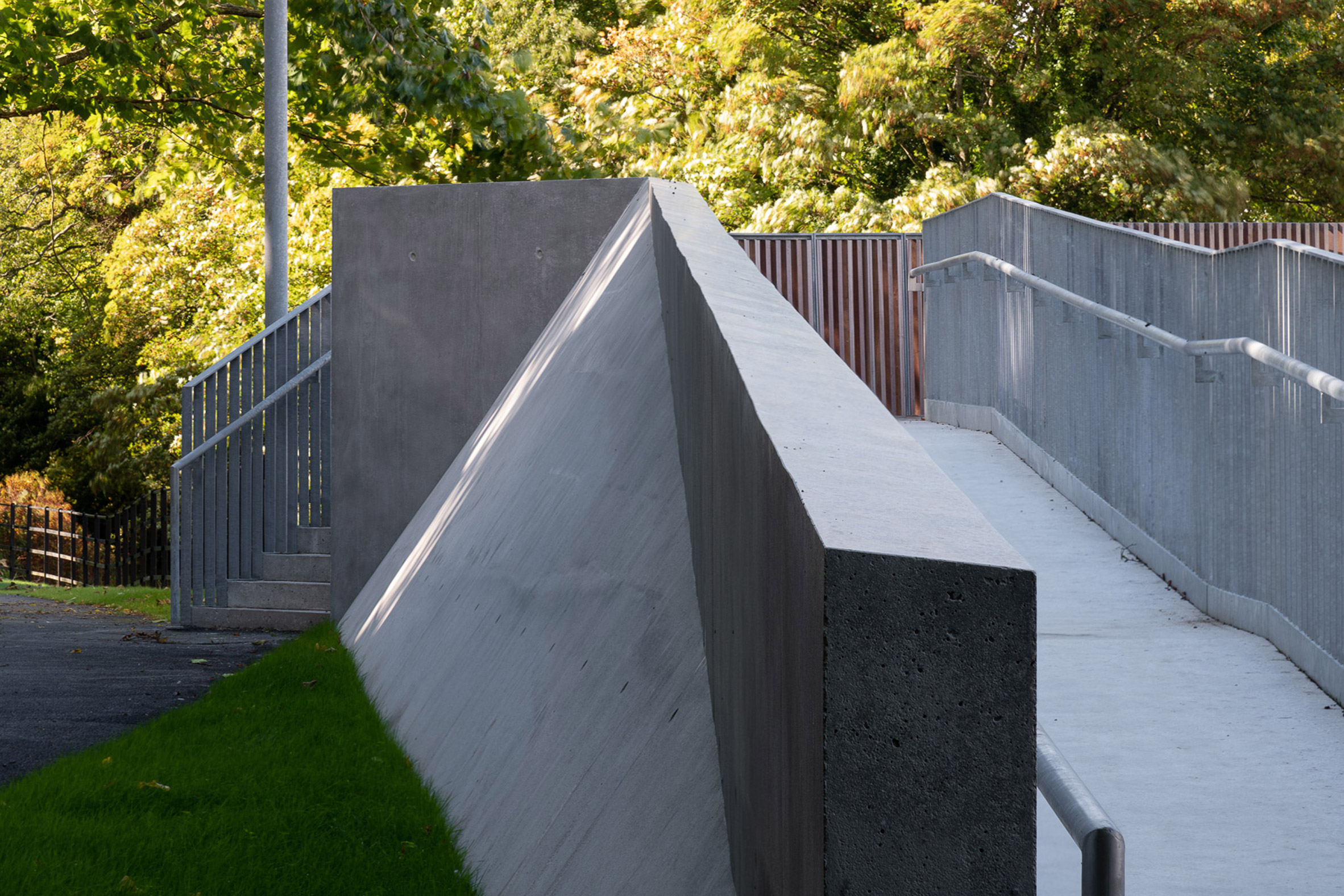 Dublin-based O’Donnell + Tuomey is led by Tuomey and Sheila O’Donnell. The pair of Irish architects were the 2015 recipients of the Royal Gold Medal.

Other projects by the studio include a faceted brick student centre at London School of Economics, the Lyric Theatre in Belfast and the Photographers’ Gallery in central London.

Photography is by Jed Niezgoda.