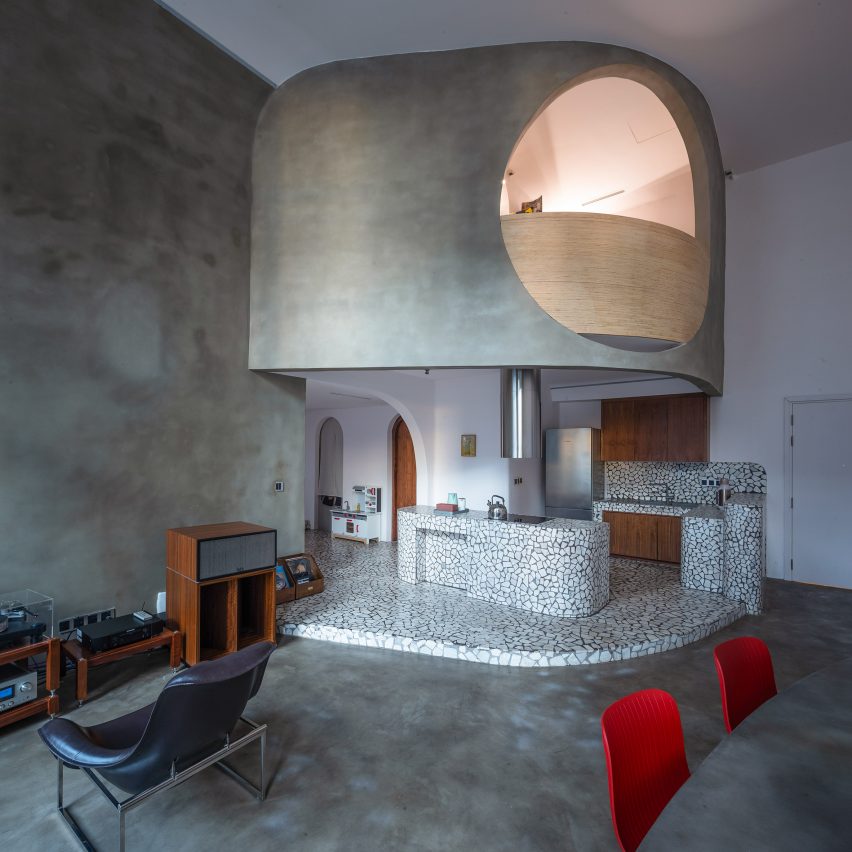 Geometric forms and graphic terrazzo surfaces feature in this duplex apartment in Ho Chi Minh City that has been updated by Whale Design Lab.

Locally based studio Whale Design Lab revamped the formerly lacklustre interiors of the Mài Apartment to reflect the client’s penchant for modernist architecture. 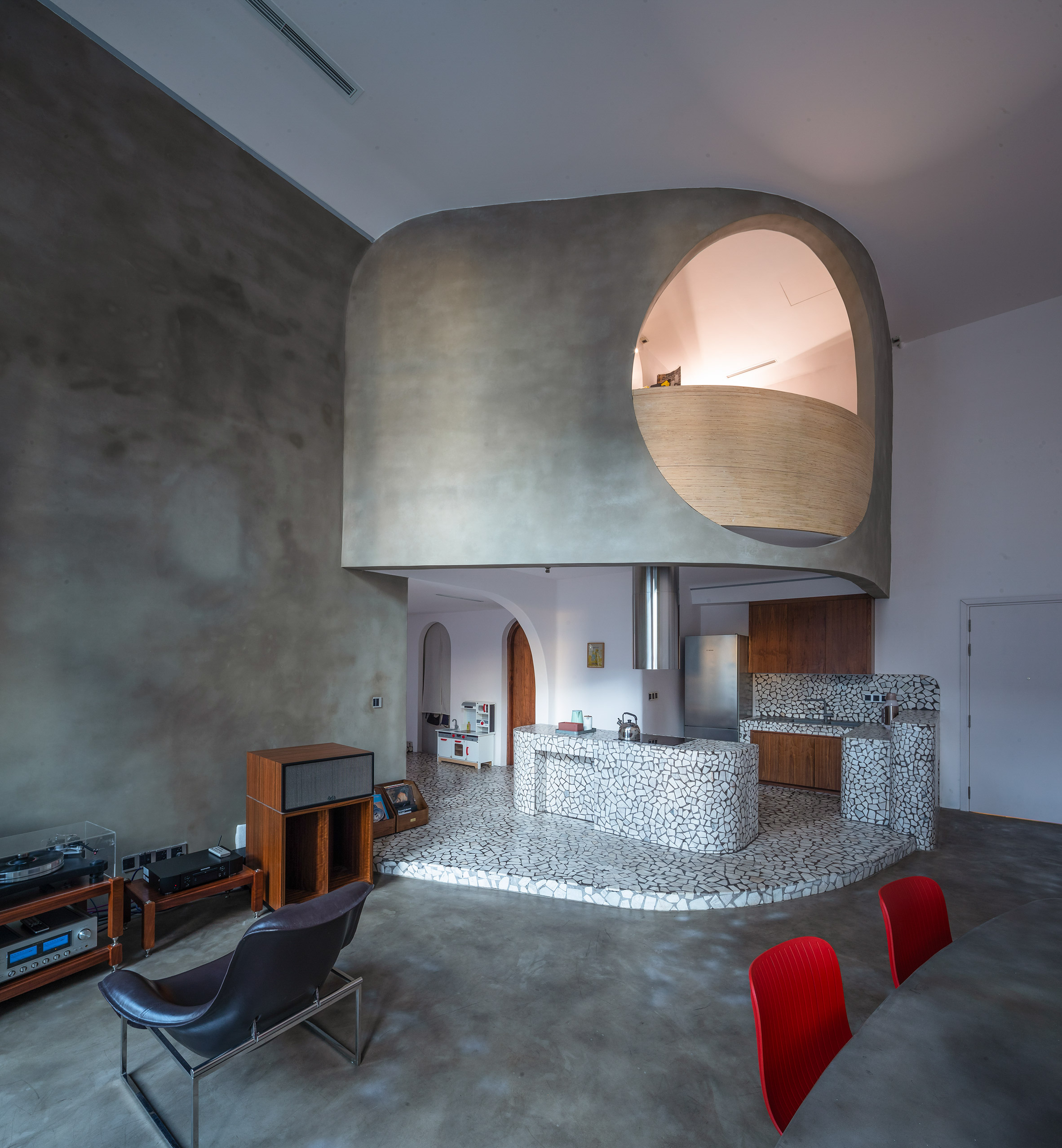 “Its owner is interested in ideas of modernist architecture about the form and its contextual transition from Western discourse to Vietnamese tropical living environment and material vernacular,” the studio said.

“If these thoughts are applied to the design, how will they conflict and harmonize with the apartment format today – a typical monotonous template found in gentrified urban development?” 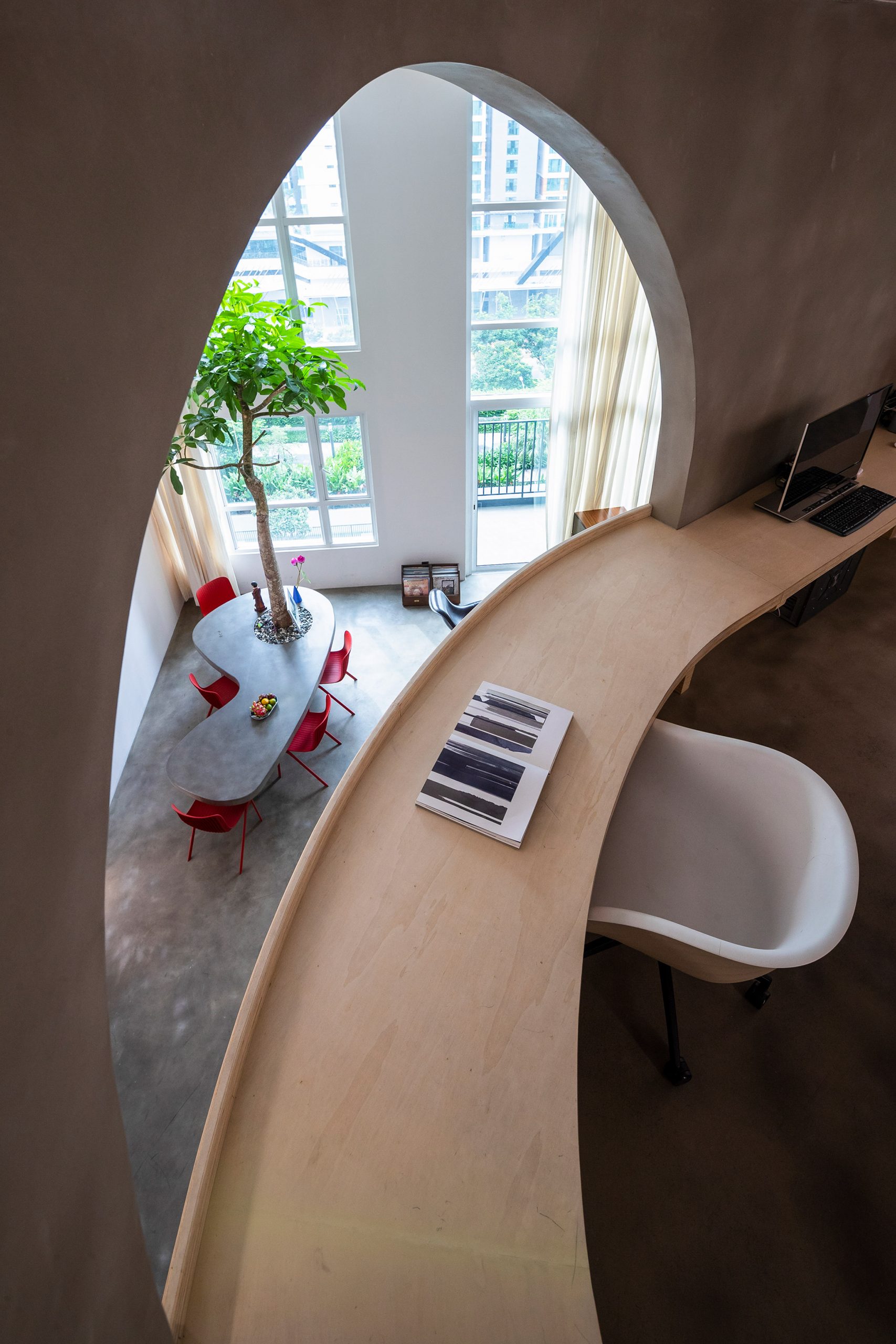 Unable to make any significant structural changes to the 200-square-metre floor plan, the studio instead decided to define different living areas using shapes – in a nod to Kahn’s architectural style.

All of the doorways and entryways to rooms in the apartment have been made arched in form. 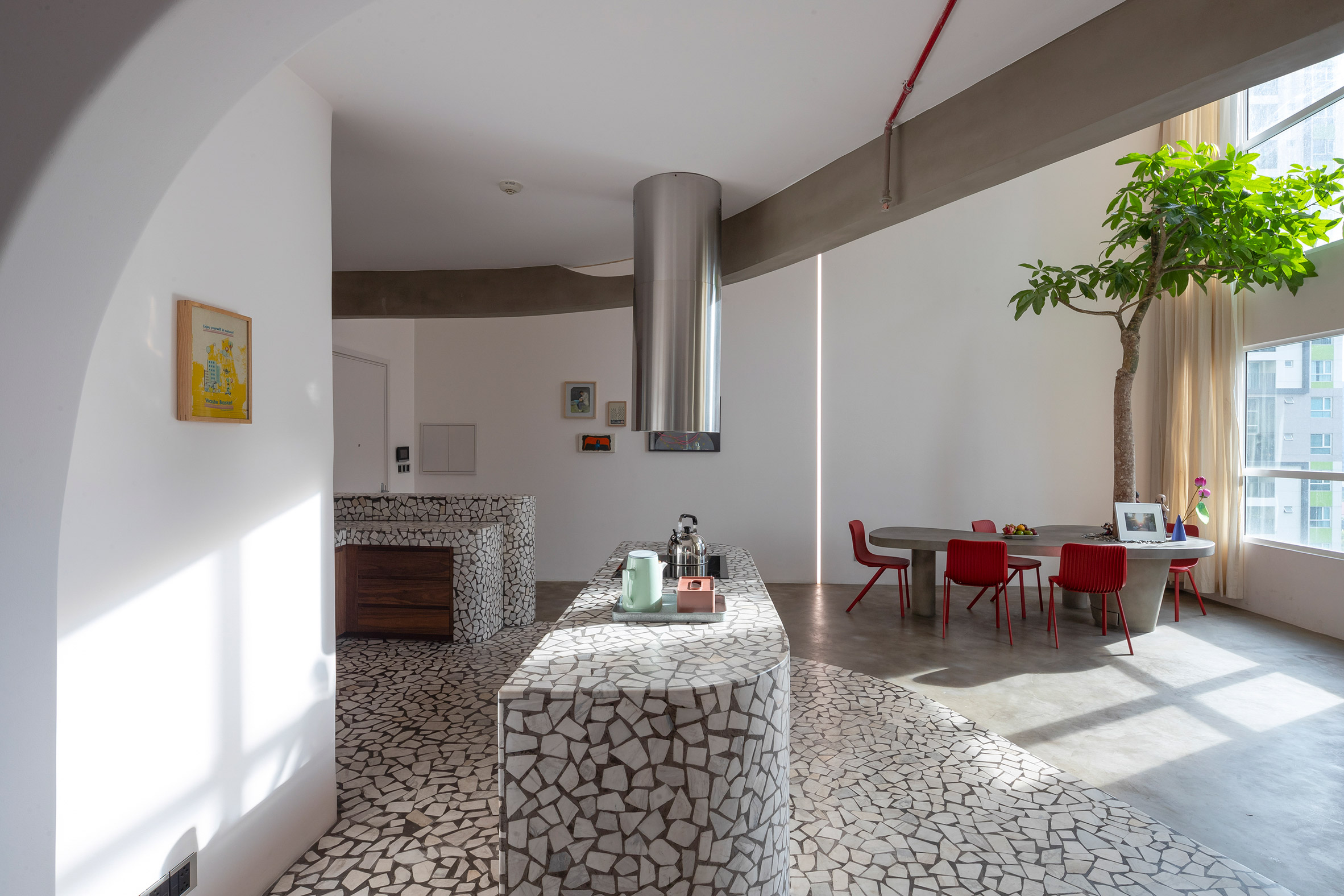 A curved volume that juts out from the corner of the living area has then been punctuated with a huge porthole that glimpses through to the study on the apartment’s upper level.

Directly underneath this volume lies the kitchen, where the splashback, countertop, breakfast island and floor has been crafted from white-marble terrazzo.

Terrazzo was specifically chosen by the studio in reference to the “material sensation” it caused in Ho Chi Minh City, commonly referred to as Saignon, during the 1950s and 60s. 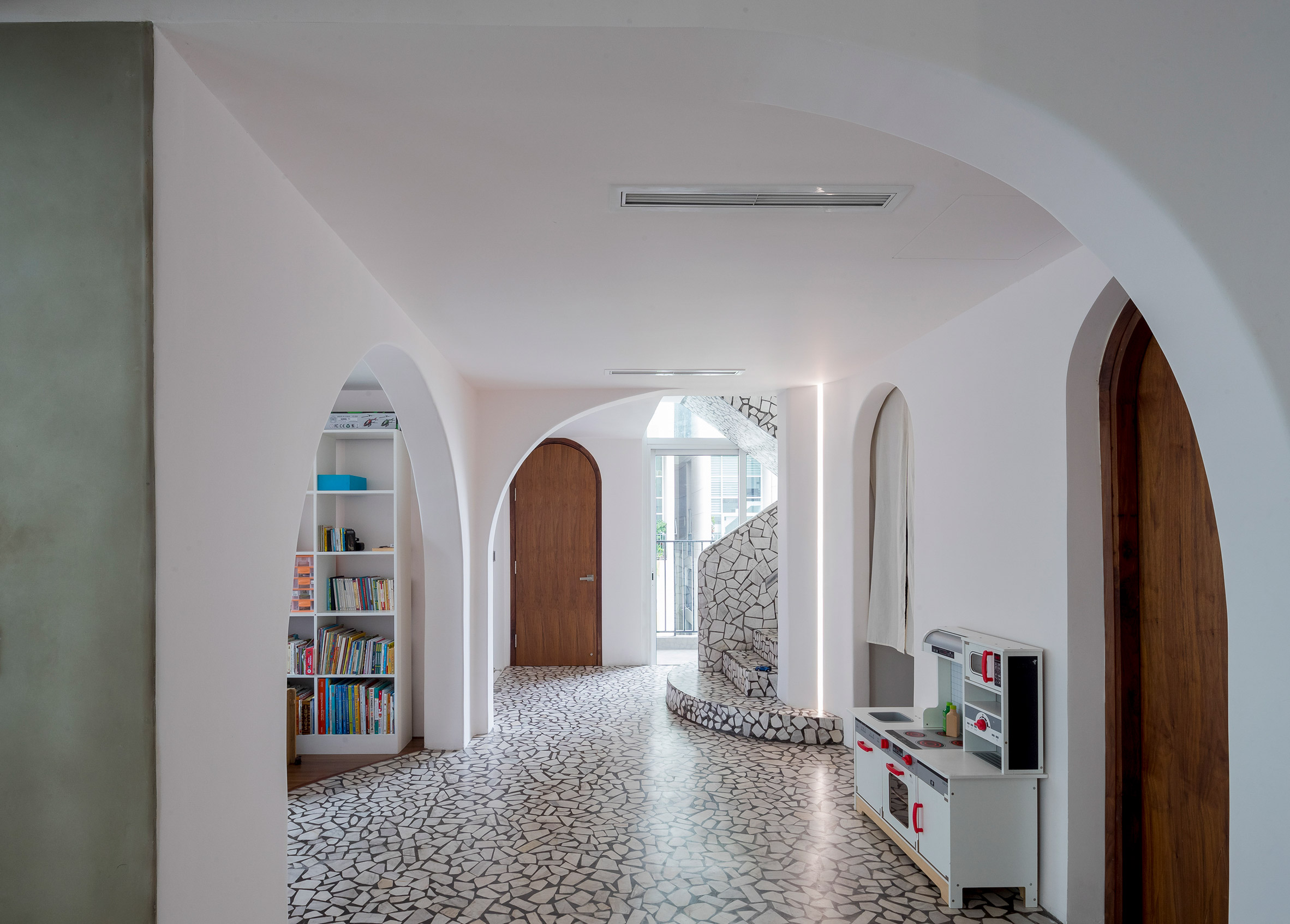 “Modernist architecture was introduced into the south of Vietnam in the mid-20th century,” explained the studio.

“The popular construction materials of modern buildings in the United States such as exposed-aggregate surface, terrazzo and cement became trendy in Saigon.” 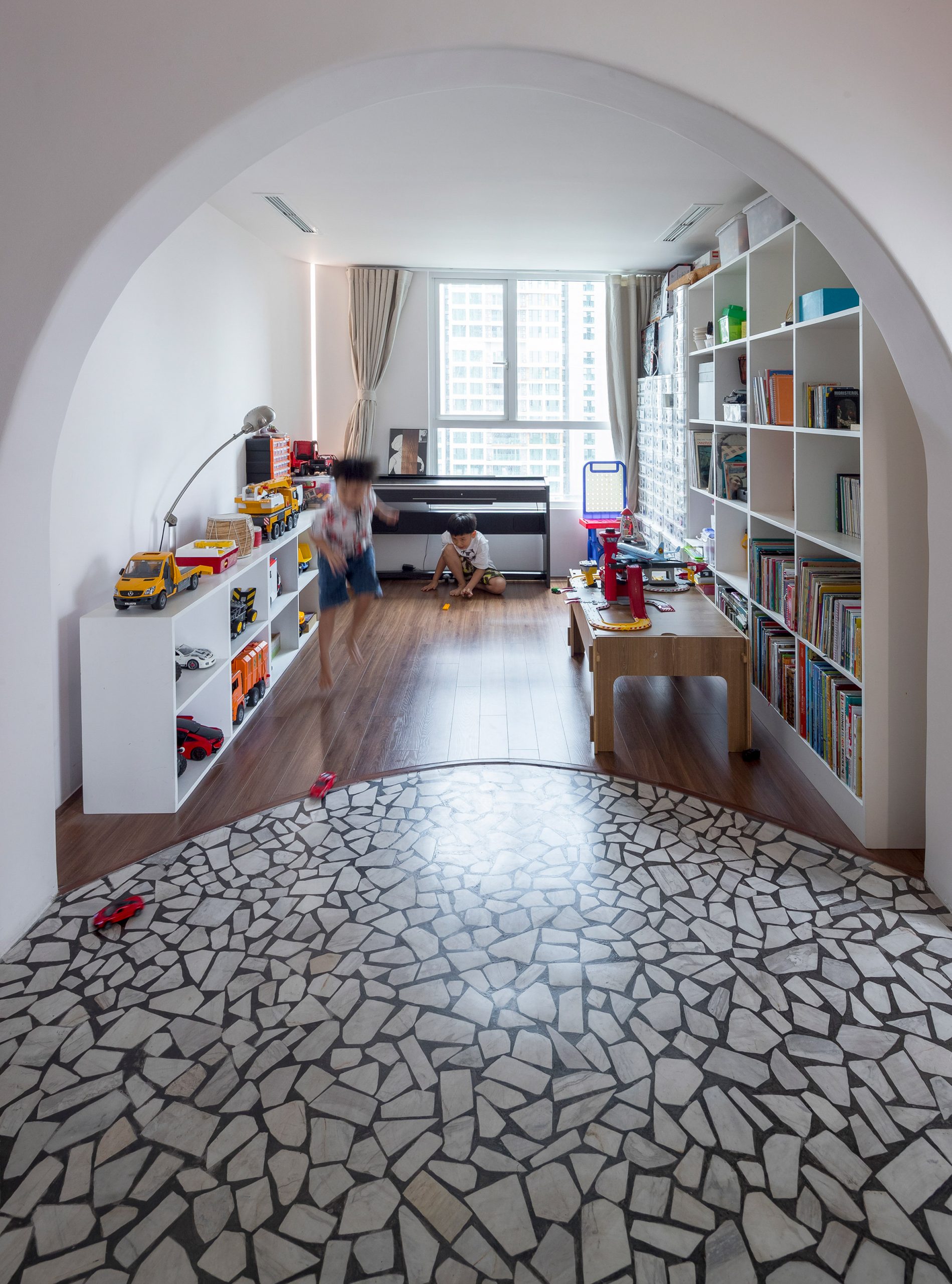 The materiality of the apartment also informed its name: “mài” translates to hone or polish in English, much like how terrazzo has to be polished after being inlaid with chips of marble, glass or granite.

Terrazzo extends through the rest of the home to cover the corridor floor, as well as the steps and balustrade of the dog-leg staircase. A terrazzo with finer flecks of aggregate also lines the wall in one of the bathrooms. 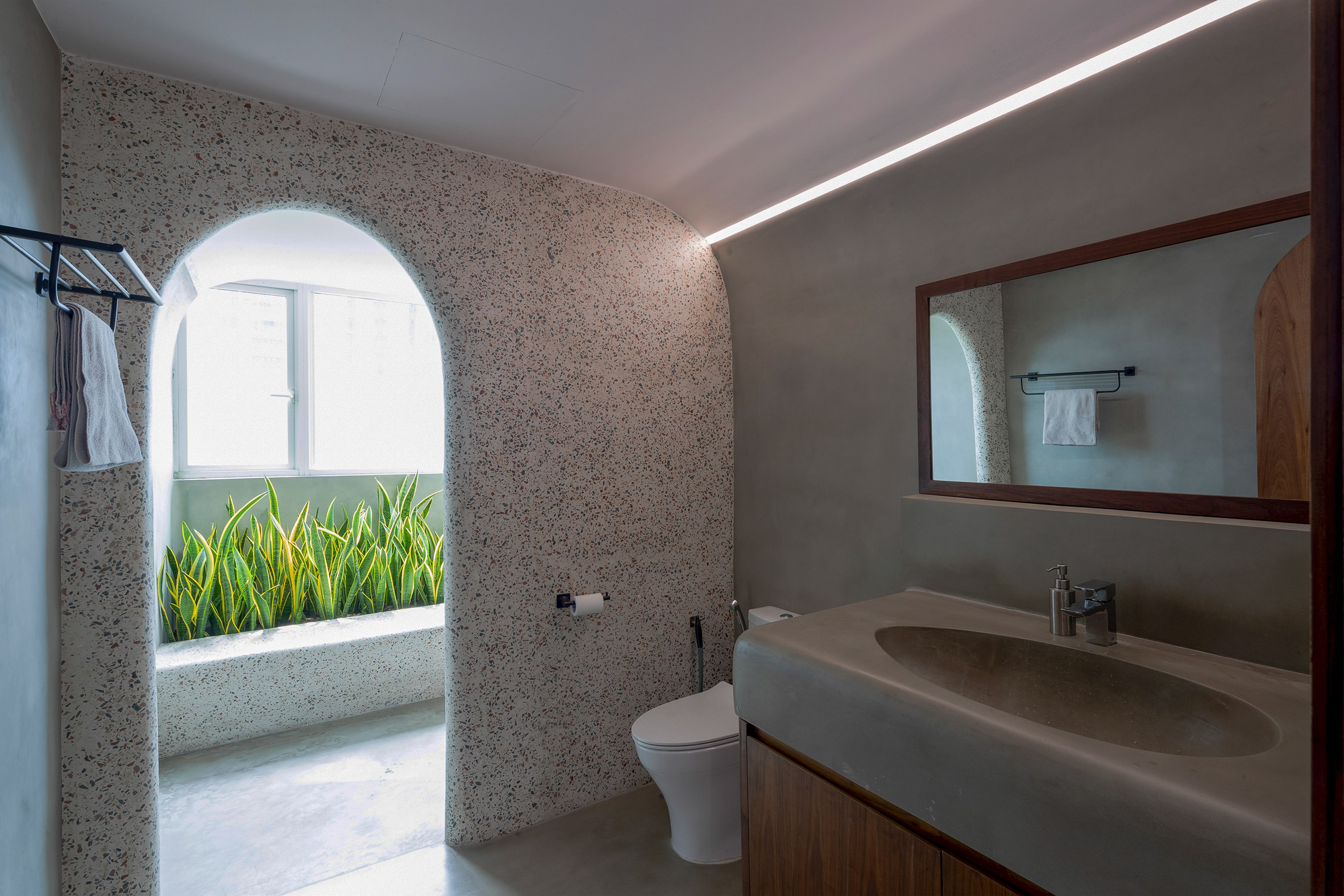 The Mài Apartment joins a number of residential projects that make bold use of terrazzo. Others include House P by MDDM Studio, where terrazzo inset with orange, beige and deep-green aggregate lines the bathroom and the stairs.

Photography is by Trieu Chien.